The British counterpart to Taskforce Wolverine in theatre are the forces operating under Operation Wingate. Much like the Americans, the operation is split into two parts: a conventional ground force and a special forces contingent. The ground force is pulled from 2 Battalion Rifles. The deployment is slow but first boots are on the ground. Before leaving their base in Northern Ireland, the ground troops engaged with in training operations with ANZAC troops. 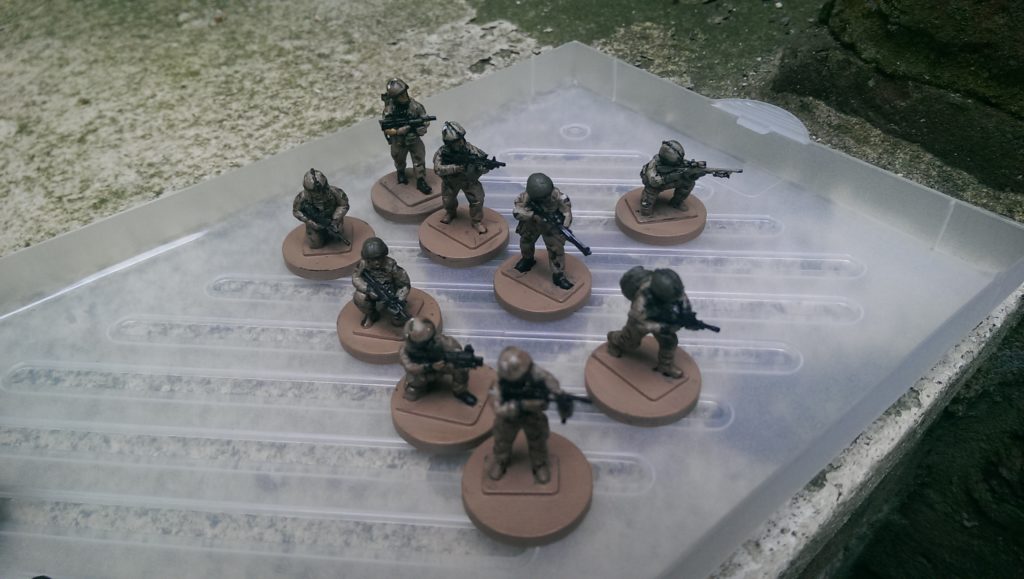 When I started wargaming I just had to buy some Brits. As cool as the Americans are, I have a slight bit of national pride for the plucky tommy. I bought three packs from Empress and these models are superb. They are packed full of details and you can choose from a selection of heads from berets for your paras up to scrim covered helmets that most modern pictures include.

So lets look at the fire teams. All rules mentioned are based off the Spectre Operations ruleset. 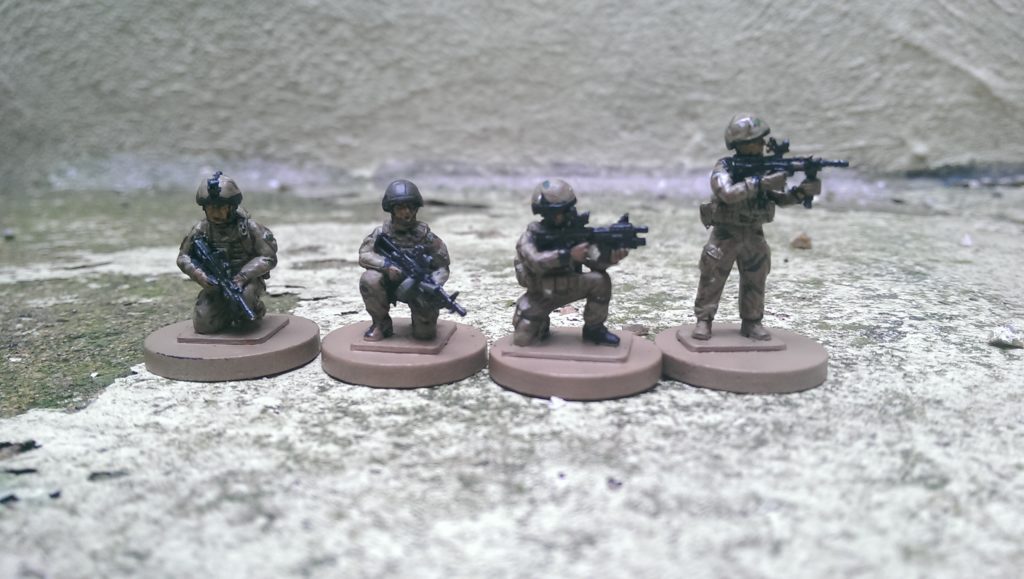 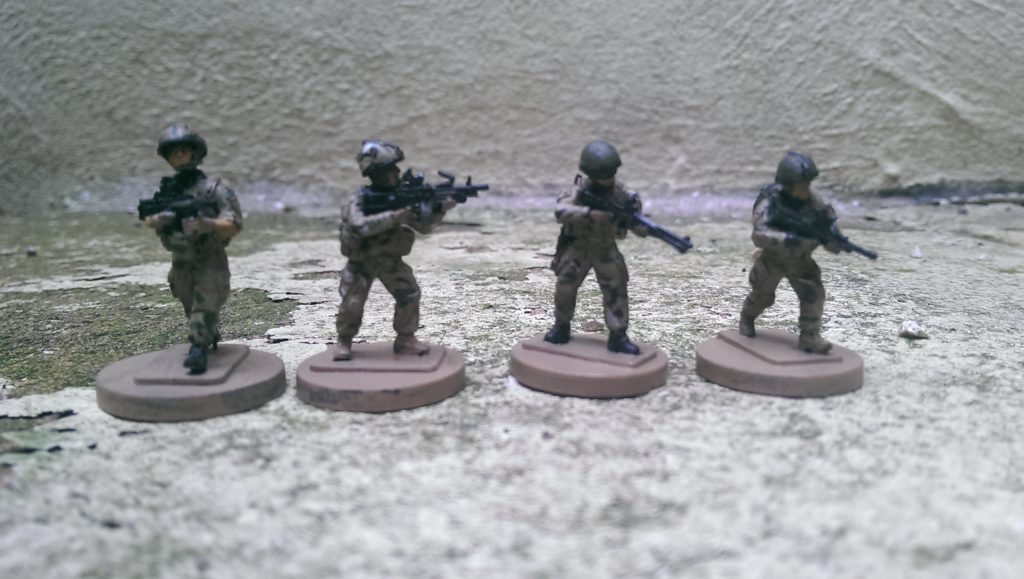 Fire Team 2 is the Assault team. Same basic loadout except the 2IC has a shotgun rather the a UGL. The last guy in the team also has a vallon mine sweeper on his rucksack. In game terms, I’m using this as an indicator that he is a combat engineer and so have given him a breaching kit, all ready for some close quarters action. 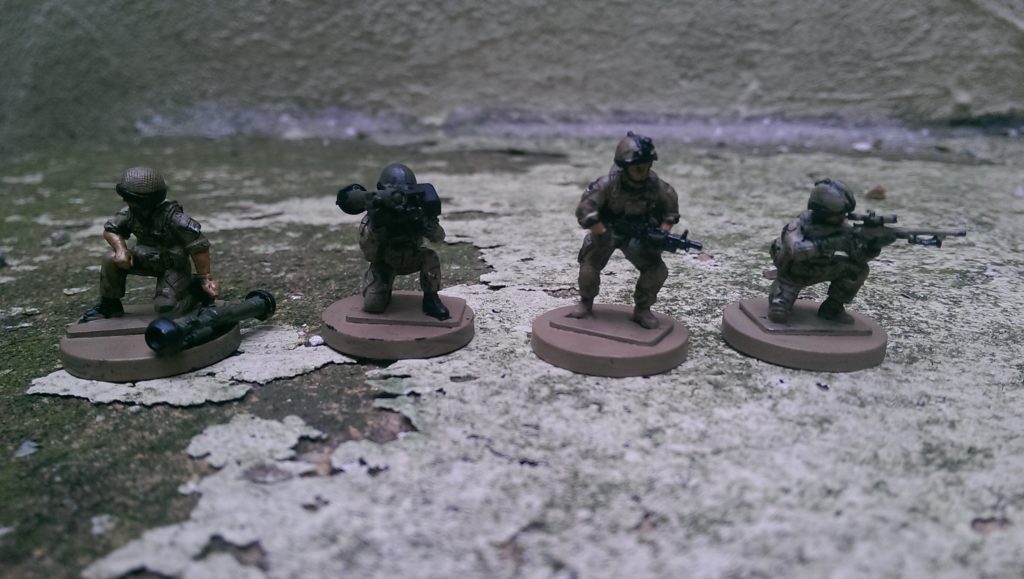 Team 3 is a support team. Comprised of a Javelin team (for the horde of technicals I’m expecting), a spare LMG gunner and a marksman with a medium sniper rifle, this team will be used and attached to fire teams as and when they are needed.

In addition to the weapons, everyone has body armour, pistols, frag and smoke grenades and radio comms. Speced up as professionals, the entire group comes in at a cool 664 points with up to an additional 50 points worth of command assets generated from the two squad leaders. I have the army list over on a google doc at https://docs.google.com/spreadsheets/d/1wrYUrzFKnCzQ0lysZ_EtTmZ12t2D-mETgaLDBXIRirE/edit?usp=sharing

Painting wise, a big thanks goes to Tiny Terrain Models. The multicam instructions listed over on his blog were super helpful, I only did two slight adjustments. Rather than doing blotches, I ended up doing small lines to mirror the slightly different shapes of MTP. I also skipped the final step of ding the tiny olive dots. This was a personal choice – I think the camo looks best from a table top height so the little green dots would be lost entirely. As always, I still need to base them so I’ll be doing that in the next few weeks.

In terms of expansion, I REALLY like the Empress sculpts. In addition they have a nice deal to buy one of each packs that would almost fill out a platoon which would be really good for running campaigns of Sangin. They also have a set of heavy weapons which would make games interesting (only 20 points for a .50 cal? nice). The aim is to have a platoon and support ready to go by the end of the year. After that, I might look into some support.

Talking about support. Next post will cover the UKSF involvement in the game world. Here is a little in world taste of what’s coming up.

Compared to their US allies, Operation Wingate has a massive special forces contingent. According to rumours, there are 16 UKSF operatives working as part of Operation Wingate, split into four teams. Two teams have been spotted boarding helicopters carrying gear suitable for jungle operations, including large bergens and ghille suits, presumably to take part in the initial recon of Lion Shield’s African operations. The other two teams have been working in close concert with the arriving British troops, acting as low profile and assault forces in urban environment against the local militias.

I’ll be playing my first game of Spectre on Monday against someone with a ANZAC group of figures. I’m looking forward to it – its been a while since I played and I keep meaning to get back into it. The terrain is going to be Bolt Action so its a little out of theatre but it should be a good first run. Full battle report next week.