Details are still lacking but it is believed that a major operation has been undertaken by British forces in East Africa as part of Operation Wingate, in a goal to quell seperatist elements. A daylight raid by elements of the 2nd Battalion Rifles has supposedly managed to capture a HVT responsible for a series of attacks on government and private interests in the region. Multiple reports also mention the presence of unknown forces in a mixture of civilian and military clothing who were seen escorting the HVT away from the engagement site, presumed to be the rumoured UKSF contingent. – Janes’s Defence Weekly, 2nd week of March 2017

As I mentioned in the last post, there are four teams working in theatre: 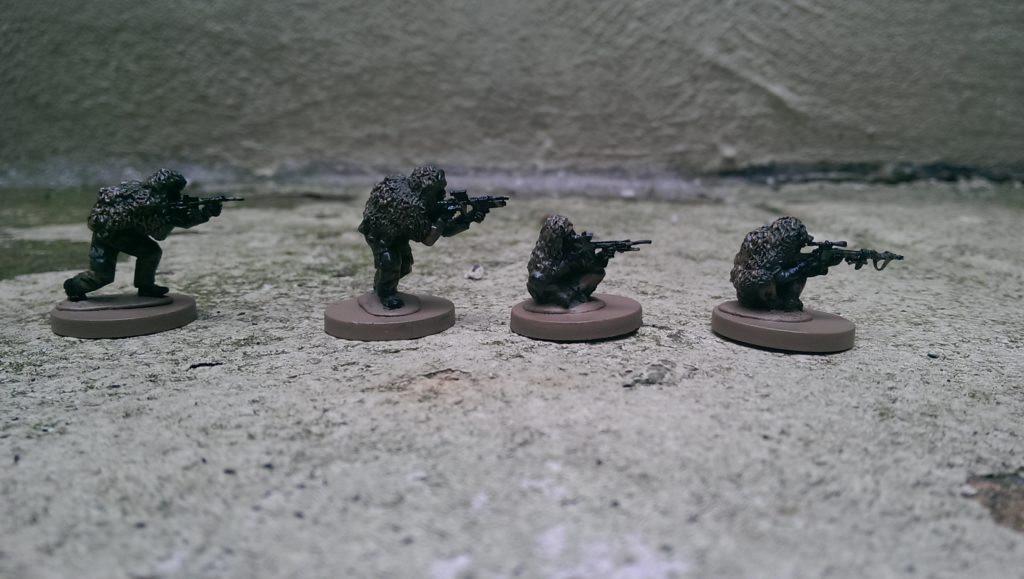 Team 1 is the UKSF Close Observation team. With a medium sniper rifle, a DMR, a compact carbine w/ UGL and a compact carbine the team is pretty well prepared for one the bullets start flying. They are only wearing ghille suits so no body armour which could prove interesting once they get engaged. 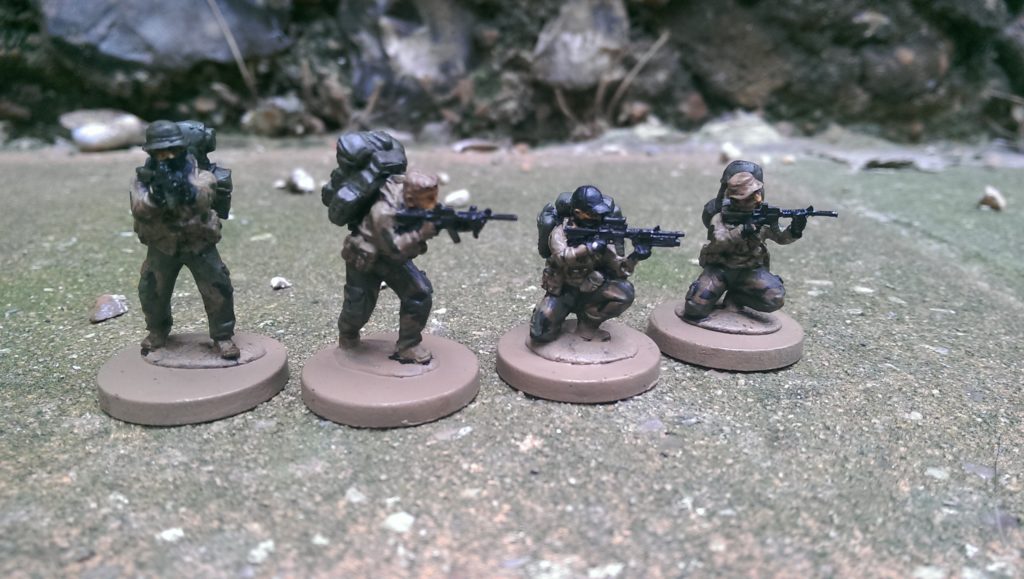 Team 2 is the UKSF Recce Patrol. This squad is equipped pretty simply with four compact carbines and one compact carbine with a UGL. They look like guys who go yomping through the jungle and so are lacking in armour. However, their massive rucksacks are just asking for extras like laser designators or various kits to give them an edge. 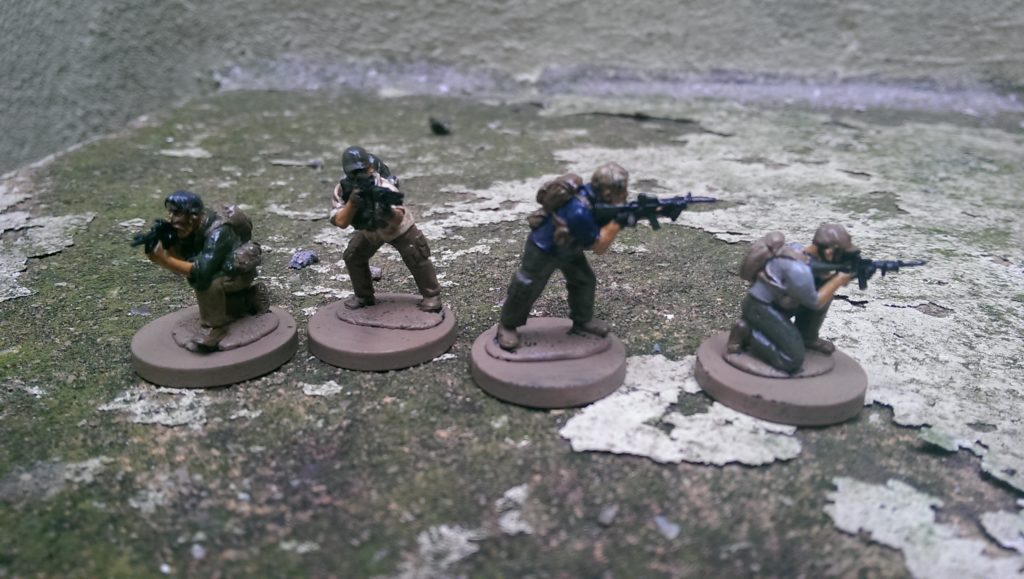 Team 3 is the UKSF Low Profile team. Dressed in a similar fashion to the guys shown hanging around with the US Marines in this video, they look all ready to blend in with the local population before getting into action. Same gear as the recce patrol in terms of weapons but less of the lugging around heavy kit. 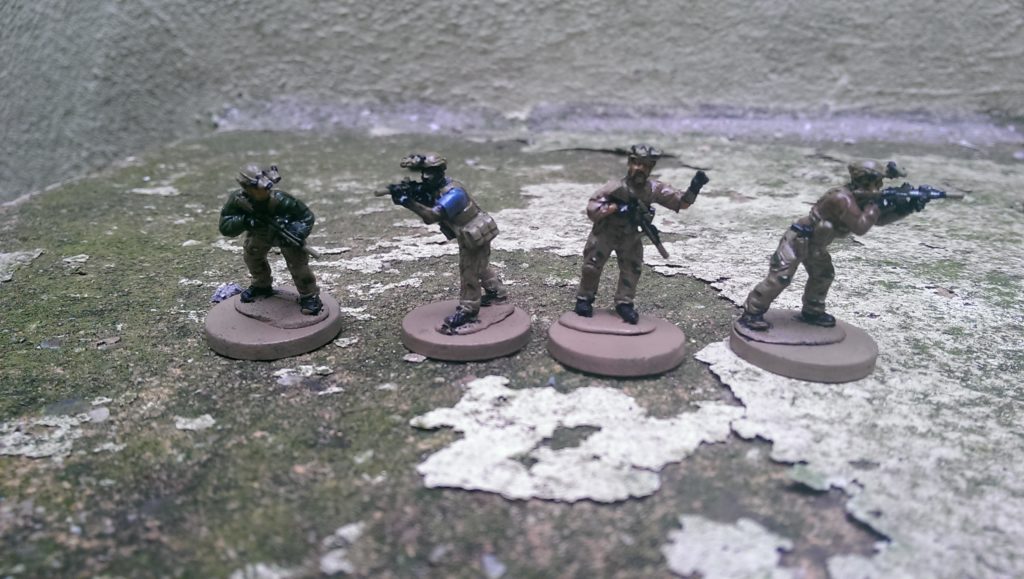 Team 4 is the UKSF Assault team. Dressed in armour and helmets, these guys look good to go to roll with the big boys. All four have compact carbines, helmets and chest rigs so they look like they could be used with armour or without depending on the situation. This team will also have another member – a Dual Purpose dog. Seeing as I received a second model, I decided to modify this one. I’ve clipped off the antenna and camera but green stuffed on throat panels and a headband setup similar to that seeing on the dog Reily from Call of Duty Ghosts. He is still waiting for my next round of basecoating before I paint him up

Colour scheme wise, each set had a theme I wanted to stick to. With both the Assault and the Close Observation, I wanted something to tie them to the rest of my British forces. I probably should have varied between the MTP being painted on the jackets and trousers but I ended up painting the DPM before I had the MTP paint (hence the mismatch). I original planned to paint the Low Profile guys in just tans and greens but ended up going for a much more varied colour palette, to give them a bit more of a civilian feel (something the Assault team also has to a limited degree). Finally, the Close Observation Team was perhaps the simplest paint job yet. Basecoat green, then drybrush two different browns.

Another comment is about the Assault team. These models are actually resin which I’m not 100% sold on. They seem to have a similar amount of detail to the metal models but also need a lot more cleaning up. They are also lighter than the metal ones which caused some issues while spray painting (I base using MDF counters of a similar size to GW slotta base rather than coins). Overall, models being resin doesn’t put me off them but I think I prefer the metal ones.

To conclude, I really like the UKSF models and I look forward to using them on the tabletop. They should be the perfect team of Elite Operators, ready for anything!