All ISAF had standard body armour and 1 frag grenade each.

ISAF started on the far side of a canal while the taliban was spread out in a selection of building and small enclosed fields. ISAF managed to down the RPG gunners pretty sharpish. The PKM gunners managed to get some suppression down while let the other fighters push into the buildings and get the high ground. The British managed to whittle down more fighters when they were in the open (including two who ran across the entire board to start threating one of the fireteams.

However, the Taliban got a few lucky shots in at the end of the game. One of the SAW gunners got suppressed and started to retire. His squad leader stood up on one of the roof tops for mere moments before a PKM burst took him down (only one points off a complete KIA). The sight of this caused the fleeing SAW gunner to leave the table entirely. As time ran out, both sides had been pretty mauled.

Learning Points
1. I need to make/buy some appropriate scenery. Currently the board really ruins the feel of the game.
2. If you have special things (like Ratlines) remember to use them. A tunnel would have let me get up close and personal faster.
3. When playing as the Taliban, get in close. You’ll always have superior numbers so mobbing them at close range works best. Also being close stops them using UGLs
4. Novices are cheap bullet shields
5. Grenade launchers are still a threat

Sadly, I didn’t take many pictures because we were too busy playing (and covering the table with paper) but I played my first game of Skirmish Sangin with one of the Brighton Warlords guys.

Tonight’s game saw the my British go up against his group of insurgents. Because of the models we had, we decided to play the Recon Patrol mission from the rulebook. 8 british soldiers (a mix of Elites, Veterans and Averages with the usual armaments) up against 8 insurgents (mixture of Veterans, Averages and Novices; weapons were two PKMs and a collection of AKs). I thought the sides seemed a little unbalanced until my opponent pointed out the victory conditions . 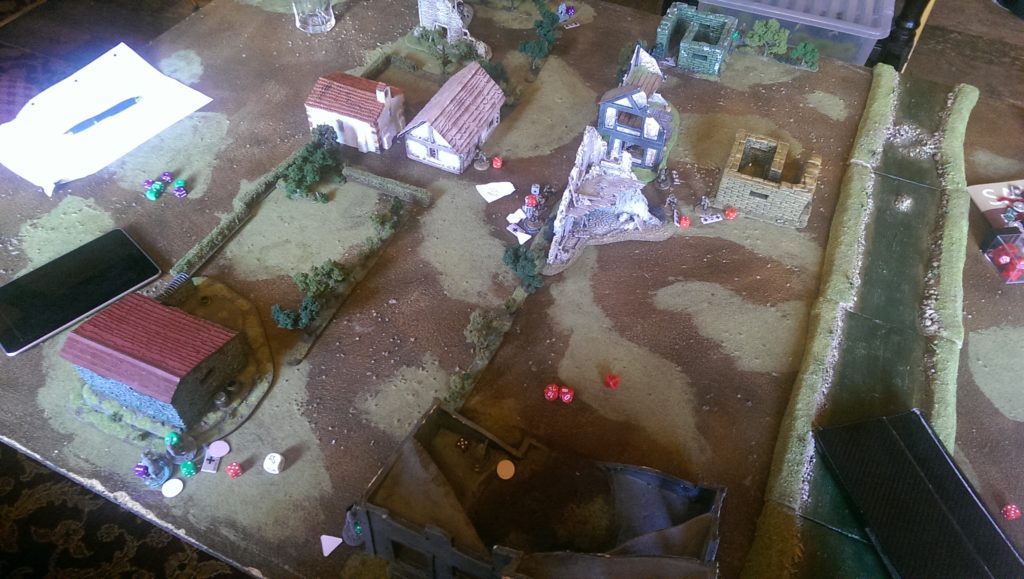 The Brits get a small number of points for keeping their soldiers alive and wounding/killing enemies but the insurgents get a whopping 50 points per injured/killed British soldier.

As the game started, the two fireteams were on either side of the road moving towards the north. With a burst of machine gun fire, two insurgents groups sprung the ambush, one dead ahead and the other moving in from behind. Both sides started exchanging fire to little effect as one of the fireteams attempted to break through into a better position off the road.

The northern group’s machine gunner stepped round the corner and dumped a mag into Fire Team 1. Three of the team took hits but body armour did a good job of stopping two of the squadies going down, although the machine gunner took a light wound. Sadly the squad leader’s vest didn’t stop it and he took a major wound, dropping to the deck screaming in pain.

Fire Team 2’s grenadier, having seen a burst of fire down one soldier and injure another, turned to the northern group and launched off a 40mm round. It scattered but the insurgents were still in the damage zone. One explosion later and three of the insurgents were heavily wounded, two of them knocked unconscious.

As the fighting spread out, Fire Team 1 slowly managed to get off the street although their leader was still stuck in the open. The southern Insurgent group  slowly got closer.

As the fight started to wind down and a few of the injured insurgents started to retire off the battlefield, the veterans fighters with the MGs tried to get close to inflict a few more wounds. The rest of the insurgents were held at bay by Fireteam 2 who managed to down another enemy and limit the movement of another two. As one of the soldiers bounded out to started aiding the injured commander, the last PKM wielding bad guy appeared out of the dust and lit up the street with a mag dump.

The game ended with no casualties but three British soldiers were injured (the section leader was 1 hp away from death) giving the insurgents a solid 150 VPs. The Brits managed to remove three enemies from the board and wound a few more but more importantly the entire section was still alive giving them 220 points. A close win for the Brits!

The team was blooded but they survived their first contact with the local OPFOR.

Lessons for next time

I really enjoyed the game. Its a little intimidating with all the counters and stats you need to look at but once the play starts it really move. It has that feeling of being right in the middle of the firefight, making fast decisions that give you feedback pretty much instantly (or when the opposition next moves). The scenario was great fun but there are one or two things that really stood out.

Coming soon: I swap sides and play my new band of insurgents against a squad of Australian infantry.

So I finally finished off my Empress British Infantry platoon. Its been one of my goals since starting to play wargames again to have a full platoon. Part of this is just down to having a project but the main reason was I want to be able to run full campaigns with them and have different models for every squad member. Mad? Yes. Cool for telling stories afterwards? Also Yes.

So organisation, the platoon is comprised of a HQ section and three 8 man infantry sections. Thanks to additional figures, I have also added a weapons section and an engineering team. This lets me sub in additional soldiers when needed and also have special guys set aside for specific tasks.

Just prior to their deployment to Tirzania, the Platoon received a new officer in command. The rest of the HQ section is solid old school veterans, with the current mortarman being an ex member of second section . (Also note the two downed pilots in the background, ready and waiting to be rescued again.) 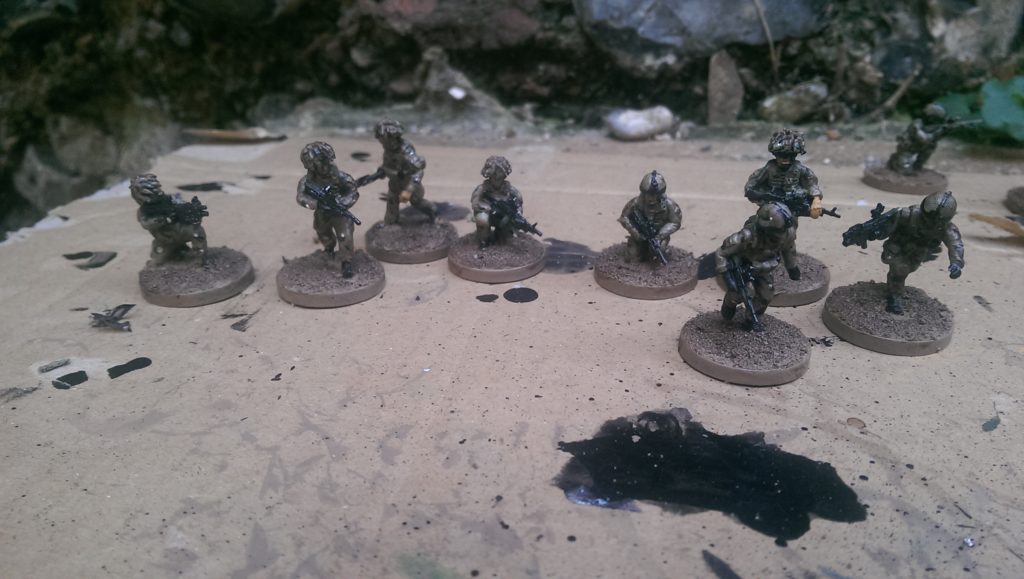 1st section is made up of a mixture of troops, mostly the ones involved with the brawling on a Friday down the bar. In the field, with their GPMG, SAW and DMR, they are ideal as long range support. Note Lance Corpral Davision being “dyanmic” with his L85A2/UGL.

2nd Section bears the nickname of the Old Boys. In part a joke referencing to their age, the Old Boys are held in a position of honour. The previous officer used them as the close support team in the last deployment, ideal at both public relations and kicking in the doors when needed. 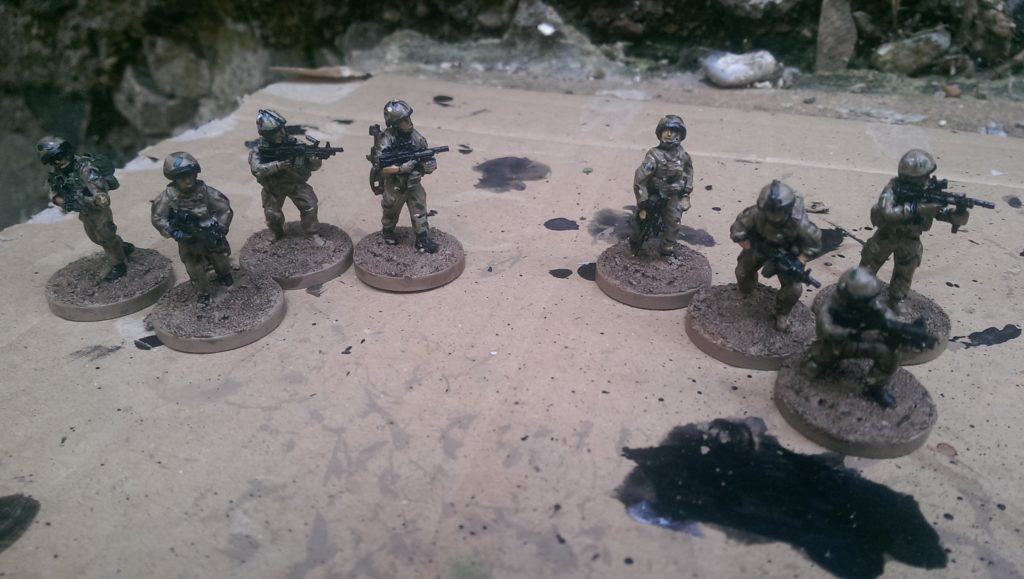 3rd section is the jack of all trades section. Mostly new faces after the last deployment, they are now looking to make their mark and earn a reputation for themselves. This is the section that is most often in the Warrior as the QRF when needed. This section can also act as a placeholder engineering team when the situation demands 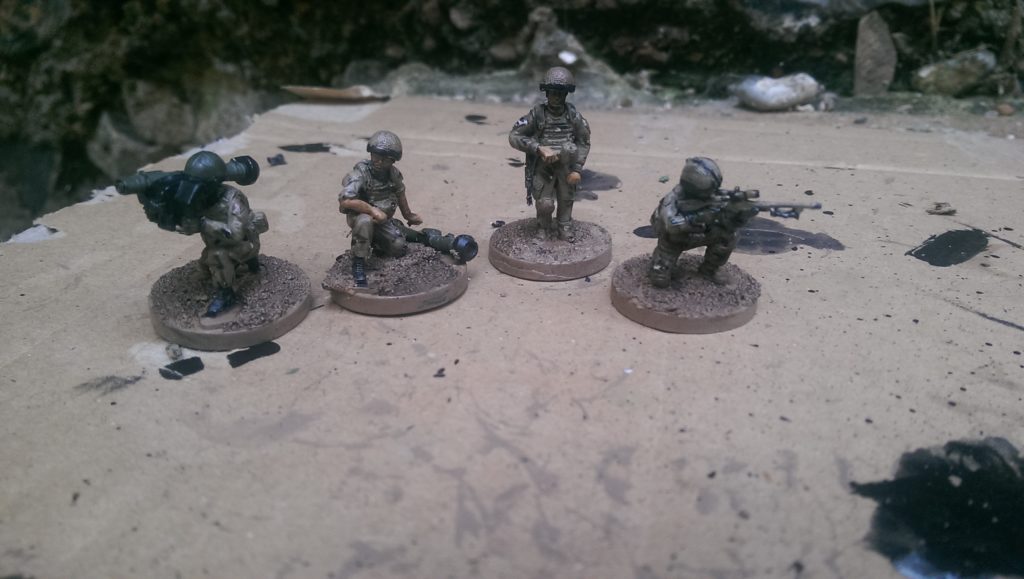 Company has assigned several specialists to assist the platoon in country. An additional medic is on hand, as are a trained Javelin team. Finally, a marksman has been requested to provide overwatch on certain missions. 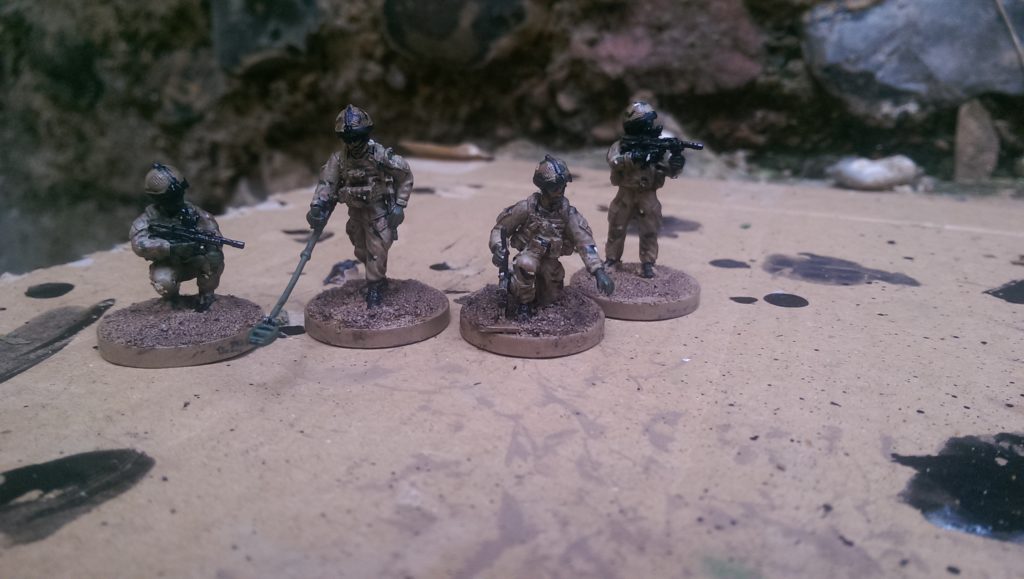 Due to the high probability of IEDs in country, the platoon has been assigned a dedicated team to help them find and defuse them. This comprises of two engineers, a search dog handler and a rifleman to provide support.

In Skirmish Sangin I run them as a mixture of average, veteran and (in the case of 2 Section’s NCO) elite soldier with body armour and a mix of weapons. They provide me a nice tool box to grab from when making smaller patrols from

All models are Empress miniatures avaliable from http://www.empressminiatures.com/userimages/procart35.htm. Overall its a good range but I it can be a pain to make full sections (only two boxes have two riflemen, a MG (either SAW or the GPMG) and a grenadier). In addition special weapons like the GPMG and the Sharpshooter rifle have only one pose each. On the other hand, a nice range of alternative heads is an excellent addition.

Well the first thing is to get the rest of my force all painted up. The Special Forces are almost done (apart from a brand new set turning up soon) and then the next group to paint will be the insurgents so I can play both sides. There is also the small matter of finishing the Warrior sat on my desk but I need to repair my airbrush first.

On the other hand, Gripping Beast do a rather good range of British from the Falklands War and it would be a shame not to have the West Shiresdale Fusilers through the ages…

Well actually quite a lot hence why there haven’t been so many posts. Between visiting home, going to Reju, playing some tabletop games and doing oh so much work I really haven’t had time to sit down in the evenings on write.

Played some tabletop? Will we be seeing some reports?

…Yes. But I’m probably not going to do much a rules review. Hopefully this weekend I’ll get them finished off.

The reason behind my reluctance is as much as I love Spectre’s model range (I just bought a load more of the devils) I really fell down hard on the rules. Between two matched sides played by beginners it works great but as familiarity breeds contempt and before you know it you’ve pulled down the curtain and the man behind is frantically trying to cover the cracks. It has a good basis but I’ll be waiting for the next edition to be released before trying again.

Oh. How’s Skirmish Sangin going? You bought the books for that one.

So I finally got round to playing that. Peeb and I did a four on four game with matching sides (although varied body values) in order to try out the rules. To be honest, the fact it looks like Dark Heresy but modern day was a little terrifying but once you get into the game the time just flys by. I’ll write some up about it at some point but I very much enjoyed it.

The only downside was that Sangin doesn’t quite give you the same “kid in a candy store” feel that Spectre does. So as a side project, I’m going to start writing some rules for some additional items and a few scenarios for my army. Hopefully I’ll be able to test them on both the Brighton and the York guys.

So how many models do you have now?

Too many. I finally finished making my British Army Platoon (all painted and based) and will be writing a post on them. I also ordered a few more insurgents to bring my sides up to being equal. I have worked out I have 6 factions I can play around with, giving me a nice box of toys to create missions with. Still keeping an eye on Spectre and Empress for cool figures but I might pause buying until I’ve painted the lead mountain.

Work is fun, airsofting was good (videos soon) and getting to enjoy driving up and down the country.

Soon. I have lots to write about I just have to find the time/motivation to do it