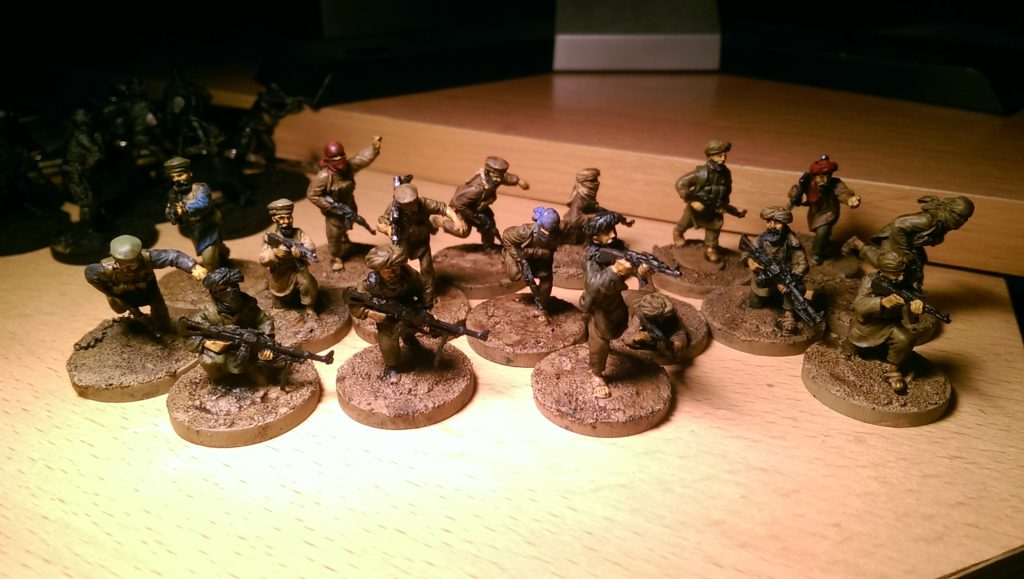 So the Russians turned up. Four operators in modern gear with AKs (both full length and carbine), four low profile agents in civvies and one female agent (with a certain haircut that should be familiar to fans of a certain Captain America film) in a leather jacket. Overall, I’m a big fan of them. The low profile guys should be easy to paint while the female agent should be pretty fun (as long as I get the correct paint for the hair colour). However, the operators should be a little harder. I would really prefer to not paint them in more multicam (one man can only paint so much) so I’m looking at Russian SURPAT which may end up being more of a brown mess (as opposed to the green mess that is my attempt at ACU).

In addition to painting new stuff, I actually went back over my older models and drybrush black areas. This is for two reasons. A, the raw black areas look terrible. B, as time goes on I need to update the models to the latest standard of painting. Overall they all look better, the Brits especially gain due to the black helmet bands and large spaces on the L85. In the process I did notice places where the brits had lost some definition due to crap under coating job so I may potentiall need to strip a few and repaint. Maybe once the challenge is finished.

Finally, as you can see at the top, I’ve finished painting all my Taliban fighters. 17 guys, all painted, drybrushed, based and varnished. There is a lot of brown and black so I tried to mix it up with some lighter, more vibrant colours. The Radio DishDash guys are especially nice with a level of detail closer to the Empress sets than Spectre. From painting them, I’m very excited about the upcoming Kickstarter models. Its also nice to finally finish painting a complete set of proper OPFOR. Mercs are all well and good but sometimes you need to paint what’s on the evening news.

Models finished (Based, painted and varnished): 117