Well this week was a painting success. 15 models finished and a few more well on there way. On the other hand, I think we also saw the last set of purchases before this challenge ends. 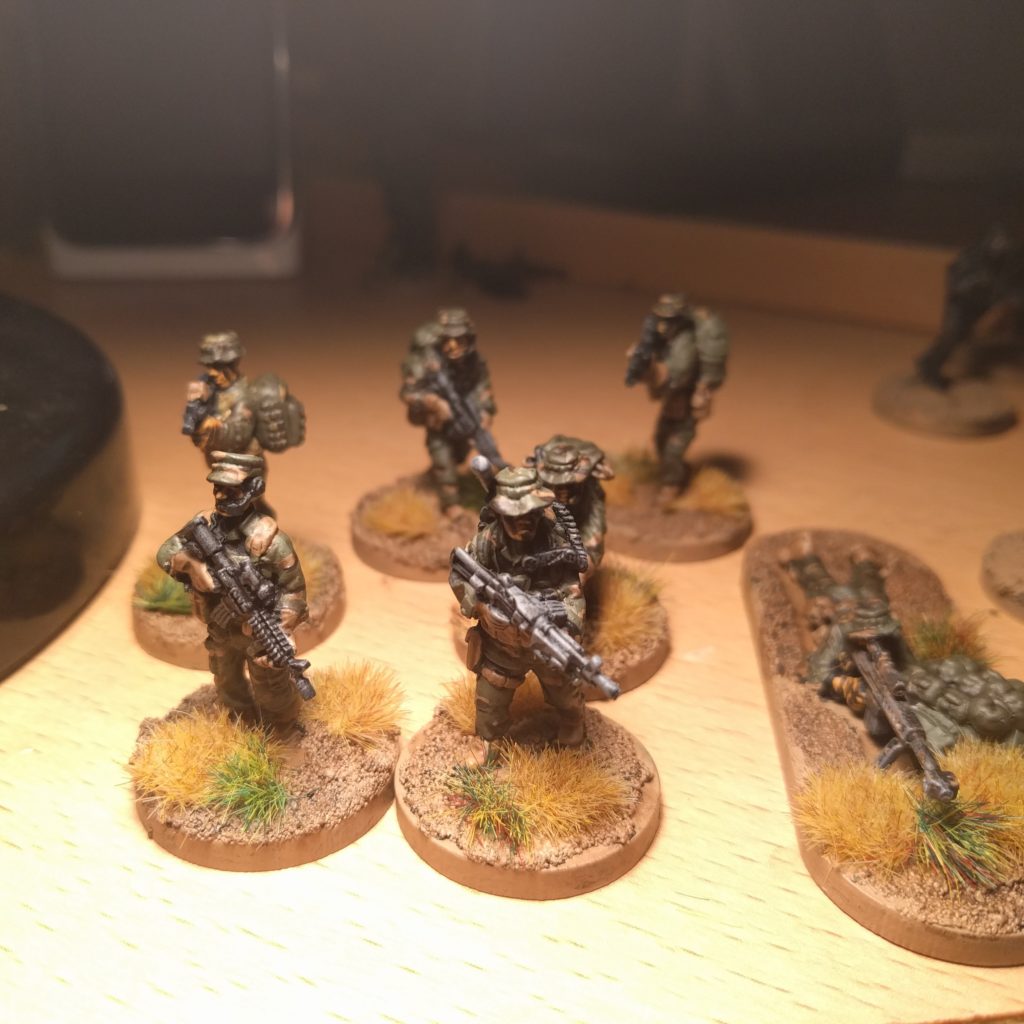 So lets take a look at the finished models! First up we have the USMC Force Recon set from Eureka Models. These guys are pretty cool, slightly older style gear than my previous models. The .50cal is going to be fun to use and also was a cool model to base. Tempted to buy some more and a ghille suits to them to give the UKSF some longer range punch. The only issue is that these models are about a head smaller than Empress or Spectre but match up to Radio Dishdash. If anyone asks, they are from South East Asia 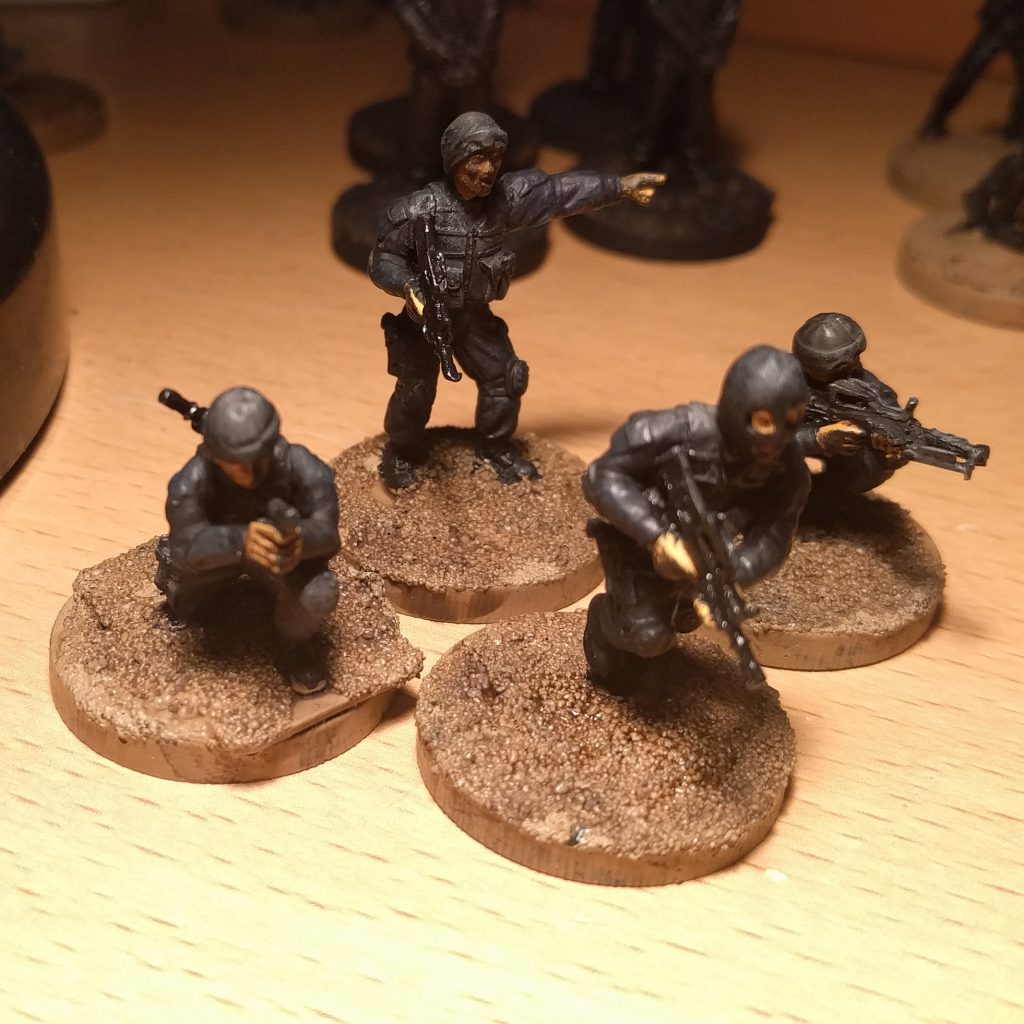 Next, we have Empress PLA Special Forces. I wanted to do something different than the camo everyone else had and so went with urban/night time clothing of navy blue clothing with black vest. I did the blue by darkening down some Kantor blue, applying two coats of it and then drybrushing the undarkened colour. Overall, fun models to paint and should be cool to have as an alternative to the Western black ops troops 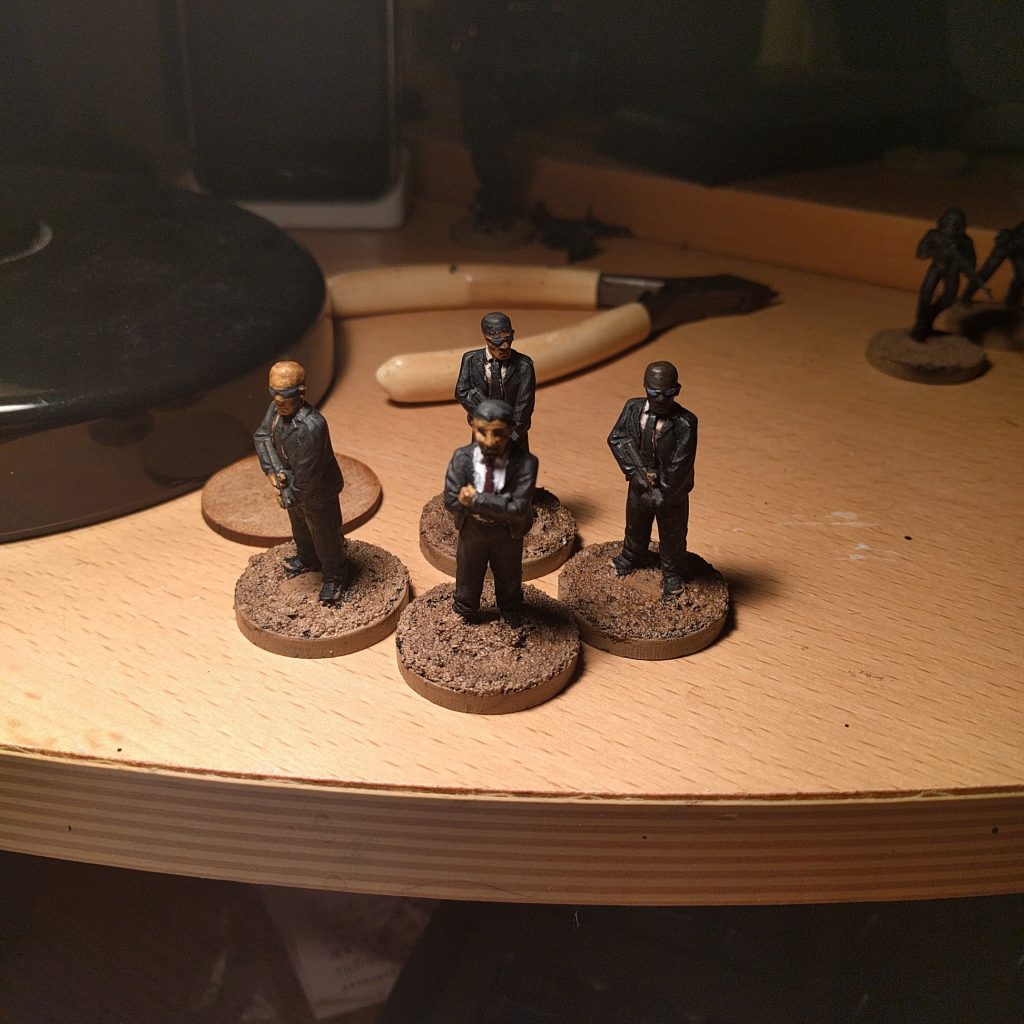 Finally, I got round to painting the first of the VIPs figures I have. This is one of my weak points – no webbing to hide their clothing and often no gun or head gear. However, I’m relatively happy with my first attempt. Doing a suit meant careful work to fill in the shirt and then adding the tie colours. Face details follow then a liberal grey drybrush to give the black some depth and make it look painted. These guys, along with the VIPs I have on the way, are just waiting to be piling out of SUVs and fighting off ambushers.

As for new purchases, well, its that time where Spectre reveal a few more figures. This time, they have added a load to the Task Force Operators range, with a new dog team, a breacher (who I spotted at Salute earlier this year) and a figure with a pirate gun M79. I also picked up a few operators (both standard and marksmen) I hadn’t grabbed before. As a fan of Strike Back, I was also really excited to see the Deniable Operators turn up. With modded AKs and civilian gear, these guys will be used as everything from Russian contractors to undercover SF to well equipped survivors. To make sure the order got over the free postage, I also added two African Soldiers with special weapons. This brings the squad up to 7 figures, perfect for a colonial nation mimicking the French system or leaving space in the vehicle for a Western SF advisor. I also managed to get some Airfix 1/48 scale vehicles at a ridiculously low price but I’m not adding them yet – need to see if I have time to assemble AND paint them seeing as I have to source some crew for them. They might end up being a post challenge reward – a kit with a bit deeper instructions than a simple bit of super glue.

Looking ahead, this will be my last set of purchases for a while – Christmas coming up means everything slows down. But, I am going to have plenty of time to paint when I’m back in Leeds over Christmas break and so should just finish the challenge. Hopefully Santa bring some wargaming things. In addition, hopefully going to start back in on writing up AARs.