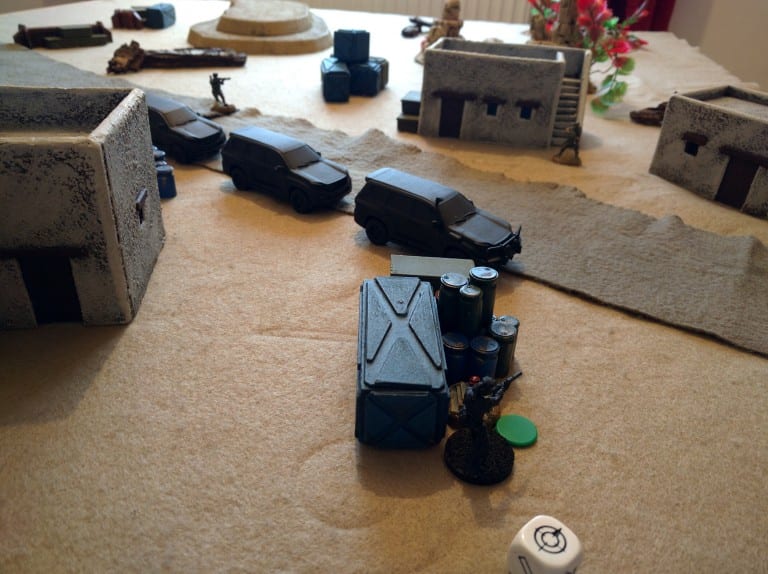 With me being in the North for a decent length of time, I found myself journeying to York to pit myself in martial combat against my erstwhile foe. Well, martial combat meaning the deployment of tiny metal figures and dice. I’ll be writing a big post on modern wargaming rules when Spectre release their new set but on this day, we had two rulesets to try.

First up was Osprey’s Black Ops. We came to these rules expecting a great game to reenact stealthy military ops and by gods does it deliver. I think the “low is good” system is a little odd and the author should be castigated for using half points in the army building system but the rest of the game is rock solid, super quick fun. Combat plays well but the stealth mission rules are the best. Random guard positions, sound counters that have to be managed by the infilitrator – it all makes for a fun time. We played three games.

Next was OSC from Evil Bear Wargames. I’ve met the writer behind the game and the way he described it really got me interested. Finally getting to play it and I was really excited in the end result. I did find the sheer number of actions you can do a little overwhelming in the first game, but the focus on objectives, the simple 1 stat system and the setup for playing weapons off against armour makes me excited to play again. I’m also a fan of how the turns playout, with the outnumbering player being limited in how many figures he can move each turn by the number of bad guys. Highlights included a Hardsuit swatting an RPG out the air with its countermeasures (just before fleeing from a few sniper hits), a SF soldier managing to grab an objective under four turns of full auto fire and my commander taking full advantage of his extra action.

Overall, I really enjoyed both games. They bring cool stuff to the table – Black Ops for super sneaky infiltration times while OSC feels like re-enacting an airsoft game, all fast paced and full of cool moves and heroics. I’ll be playing a lot more of both games, as well as more Skirmish Sangin and Spectre, this year.

Then we played sleepy D&D and a fun time was had by all.