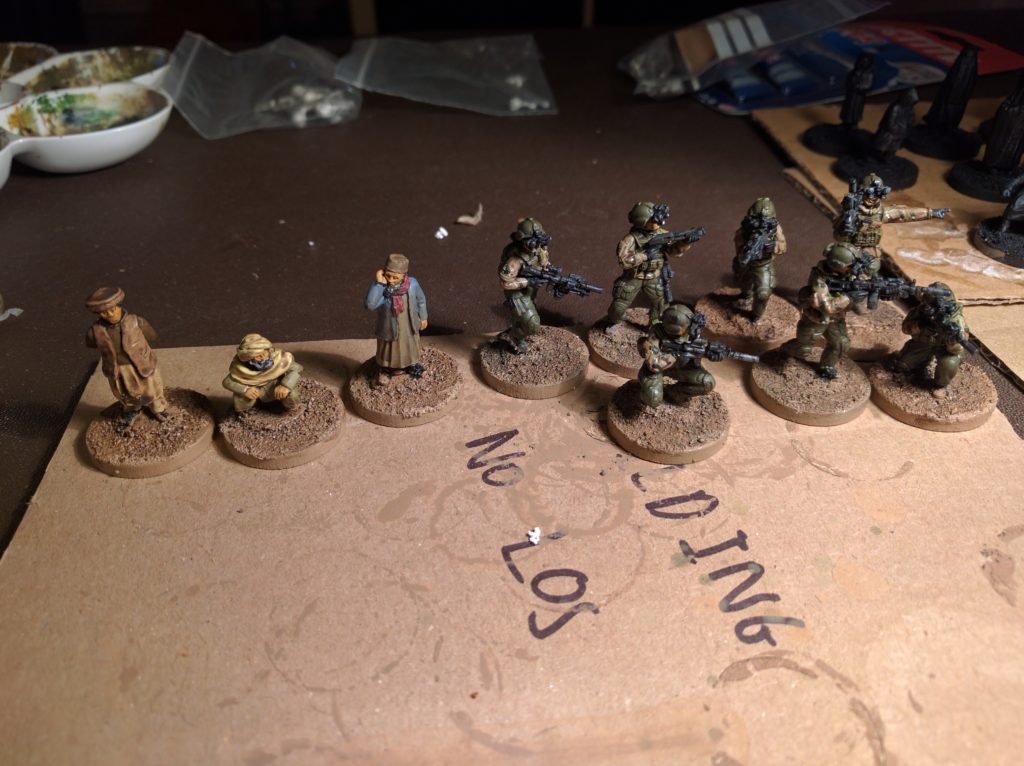 Skirmish Sangin is all about the narrative and so I want to try writing some narrative reports for it. This is from a game I played at SESWC using the trusty Route Clearance scenario, although replacing the SEALs with SAS troopers thanks to Empress’s new releases. EDIT: Pictures at the bottom of the article.

Night, and the lights of the nearby village appeared like fireflies in the NVGs of the four waiting SAS troopers. Intel had revealed that the local star bomb maker had finished a new device and would be placing it somewhere on this road, all ready for the next ANA convoy to blunder past it. For months, this figure had alluded them until a recent capture blurted out the craftsman’s habit of placing the devices himself. Thanks to this, the team was in position to spring an ambush although they had brought full kit, expecting a fire fight. The new officer, Captain R______, and his subordinate were crouched in a poppy field; the tall stalks provided good cover from prying eyes. On the other side of the road, the team’s LMG and his assistant were prone in a dried river bed, which provided ample protection and concealment. Now they just had to wait.

As the hours went by, a small group of locals came out of the village and headed up the road towards the team. They moved carefully, scanning their surroundings. Upon reaching the junction, one of them knelt and started to dig at the earth while the rest setup a circle around him. These actions seemed suspicious to the Captain and a quick scope revealed the knelt figure as the target, carefully placing a package into the freshly dug hole. However, the ROE prohibited firing unless active opposition was spotted. The manoeuvre element slowly creeped forward, ready to rush in and arrest them.

For a while, the other figures seemed unarmed just smoking and watching the man work. All this changed after the bomb maker finished when one figure turned to put out his cigarette and his robe shifted, revealing a PKM to the SF team. With a single radio command, the team leader gave the orders to open fire.

The LMG did quick work of the machine gunner leading the group. Hearing the gun shots, the bomb maker fled. However, running over rough ground at night is tough and the bomb maker kept slipping and slamming into the ground before collapsing into the field and the cover of the tall plants. Another fighter also rushed into the field but instead of finding his friend, he came face to face with the SAS officer creeping forward. The two combatants engaged each other, but neither could find an opening so the insurgent broke off and hid. Deciding to focus on the mission, the officer crept on.

Back on the road, the remaining Taliban soldier went to see what had happened. Instead of finding his friend, he instead found the barrel of the SAS 2IC’s rifle. A few silenced shots, and another fighter was down. Hearing the noise of his friend and the SAS officer getting into a scrap, the bomb maker fled again, out of the cornfield and back towards the village. Obviously wearing shoes two sizes too big, he kept falling in the dirt until he eventually reached the wall of the first house.

The noise of the gun battle quickly brought more fighters into the fray with 7 more insurgents streaming onto the board, including a foreign fighter known simply as “The Fox”. While the rest of the group rushed forward towards the bomb maker to extract him, this wily fighter instead stepped off the street, dropped to his knee and started to scan for targets. One of the villagers ran up the stairs to the building’s roof and tried to spot any sign of the SAS in the wheat field. Two of the lead fighters advanced up the road, only to be dropped by another burst of 5.56 from the LMG still sat in the river bed.

The SAS officer, seeing it all going a bit Pete Tong, decided that a change in ROE was in order. After informing the rest of the squad, all the operators quickly aimed towards the bomb maker, now planning to take him off the streets entirely. A quick shot from number 1 downed the target, but he managed to crawl round the corner towards his compatriots. At this point, the LMG swung round and cemented itself as the toast of the mess. Drawing a bead on the injured fighter, the SAS trooper filled the street with high velocity rounds. The trail of hits not only took down the target but also killed two other fighters, including one clutching an RPG.

The Fox, seeing all this, started zeroing in on the cause of the fire. As the muzzle flash of an LMG  filled his sights, he fired a quick burst. The three shot flew in, one shattering the lens of the gunner’s NVG, while the other two slammed off his body armour. Crying out in pain, the gunner got low, trying to get further into cover. By his side, the assistant quickly popped up, sighted the source of the incoming rounds and dropped him with a few shots, seeing the insurgent fall onto his back before pulling himself out of the line of sight.

The 2IC had fallen behind, attempting to support his team from afar. As he moved toward the village and his superior, a noise and movement drew his attention. The last remaining member of the initial enemy group had planned to take advantage of the ongoing firefight to attempt to sneak back to town. Instead, he had run across to the road but tripped and fell into the ditch. Acting on instinct, the 2IC popped off a shot, the howl of pain from the injured man showing his hit. Hearing the call of “Target Down” from his boss, he decided to not finish the possible source of intel currently lying in front of him. Hitching the casualty on his shoulders, he worked his way back through the poppy fields. As he entered the first one, he heard a thud as someone had fallen over and in the rough earth in front of him. Much as he expected, the prone form turned out to be his Team Leader. Eyes raised and a mutter of “Bloody Ruperts” later, the operators continued falling back.

With their main target dead, a possible source of intel in hand and only a minor injury, the SAS started to exfil. However, one lone fighter still stood on the rooftop. Peering through the inky blackness, he attempted to spot the elite soldiers. For brief moment, he thought he saw the shine of a weapon in the moonlight. Then it was gone, much like the elite operators who had wiped out most of his friends. As he stepped down and went back to report in events to the local warlord, he noticed the body of The Fox had also vanished from where it had been moments before…

It wasn’t until the team was back on the helicopter ride home, captive safely on board and waiting for debriefing, that Lt. P____ turned to his Captain and said “Sir, you do realise that the IED is still in ground right?”. Looks like EOD will returning to that stretch of road before any convoys drive along it. 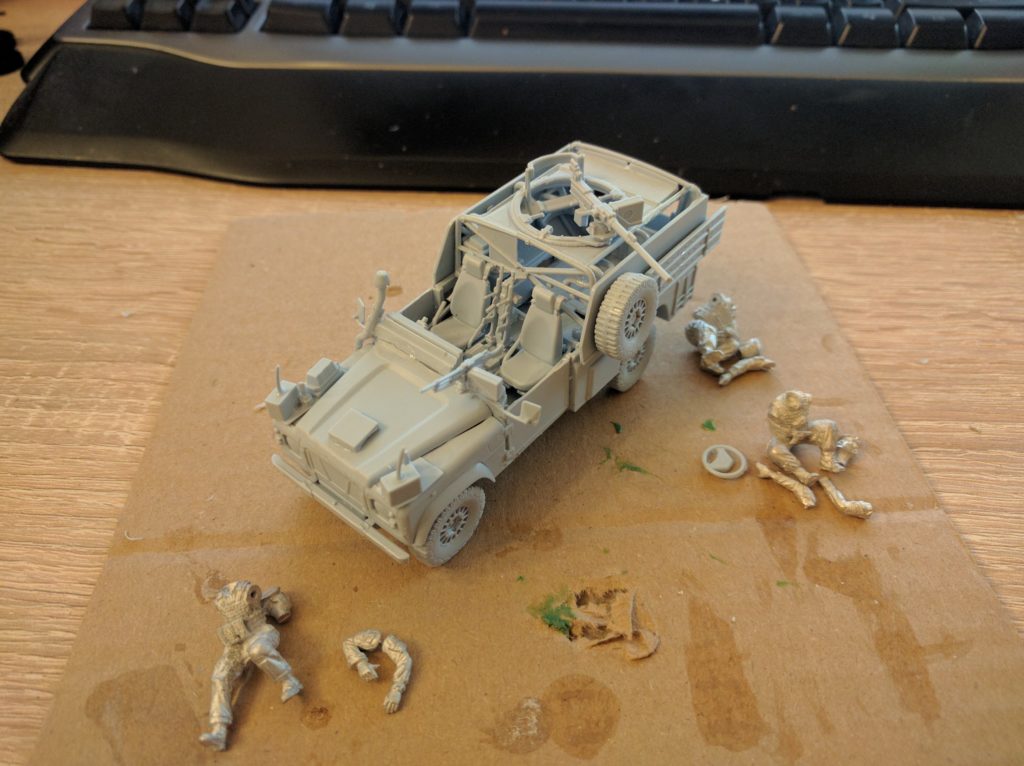