Seeing as people liked the last game, here is the followup. I’m forming a rough campaign taking the results of the last game and bringing it forward. I played this at SESWC using a tweaked version of the Compound 17 scenario from the rulebook.

“Round of applause for Team 2 everyone” joked the Major as the teams shuffled into the briefing hall. “Thanks to the little snot they captured during the bombmaker hunt, they managed to claw viable intel from what would have otherwise been just one less bomber in the world”. The Major waitied for everyone to be seated before continuing.

” We now know that the Taliban are looking to regain a foothold in the region. There are lots of warlords eager to line their pockets and go back to the bad old days. Thanks to our little bit of intel, we know when a major Taliban figure will be sitting down with a warlord to discuss joining forces. Team 4, you’ll be going in to  observe the target compound. Once both HVTs are meeting, we will launch an assault supported by the West Shiresdale Fusiliers. Two sections will block to the north while 1st section will provide fire support. Grab or eliminate the HVTs and try not to get too banged up – the quartermaster is still annoyed with the dinged armour Team 2 came back with”

The Blackhawk flared slightly as it came into land. The 8 soldiers inside quick disembarked and regrouped, heading towards the series of compounds.

“Bloody hell, could they make any more noise?” ‘Oscar’ whispered to the rest of the operators huddled in the dried creak bed. 2 days ago they had trekked in and hidden themselves amongst the rocks and grass. It took 24 hours of waiting before there was even any sign of enemy activity in the village, more than just a few locals tending the fields and chatting in the sun. The arrival of a group from out of town in black turbans and totting serious firepower announced that both HVTs had arrived. After reporting in, the team had donned their kevlar and prepared to engage.

The helicopter has also elicited a response from the village. Civilians stared up into the sky or rushed to their rooftops to catch a glimpse of what was happening, but the fighters started to spread out, claiming fire points and grabbing guns. More importantly, the coming battle had pulled the warlord out of his meeting, running across to pull his newest fighter back into action and to scatter the civilians. The Taliban leader instead calmly stayed inside, trying to understand what was happening before risking his neck.

Putting their training to use, ‘Oscar’ brought the Minimi  to bear and, with a single burst, dropped the warlord into the dust with a scream. Other members of the squad similarly added their fire until the warlord stopped moving. With one HVT down, the special forces started to hammer the terrified and broken local fighters, plucking them from their perches or sending them crawling in the dirt to cover (including one who got pinned out in the open and distracted the SAS’s shooting for a while). Behind the SAS, the Fusilers had formed up and were beginning to move through the field towards the town.

The Fox was having none of this. With a cry to his brothers, they rushed to the roof of the building they had been resting in. One of the experienced fighters spotted some ‘Americans’ moving through the field. Resting the heavy PKM on the wall, he sent a burst of tracer fire flying towards the Fusilers. No rounds connected but the troopers had to stop to get their act together. This was to be a dangerous mistake.

Seeing the targets lit up, another insurgent rushed up the stairs, paused briefly and then sent an RPG spiralling towards to the field. It missed its intended target but instead airburst, sending bits of metal spiralling everywhere. Several fusilers got hit by shrapnel, with body armour luckily stopping most of the impact but one unlucky soldier took a shard to the leg, dropping him like a sack of potatoes. This changed Fireteam 2’s objective, and they quickly sought to get their casualty out of the line of fire.

This was not to be. With another burst of PKM fire, the rounds ripped the injured man apart. Fireteam 2 would now be evacuating a dead man. A field over, another catastrophe hit the Fusiliers. Eager to get out of the danger zone and close with the target, one of Fireteam 1’s soldiers rushed forward through the field. Unfortunately, he did not see the pressure plate stuck in the earth and detonated a booby trap placed the previous day by the insurgents. Fireteam 1 quickly rallied though, with one soldier pulling the injured away despite the rounds whizzing over his head. The other two (with grenade launcher and GPMG in hand) managed to dissuade any further response.

The SAS had finally cleaned up the fighters and started to advance into town, hoping to snatch the second HVT. What they hadn’t expected was The Fox. Having rushed across the road and pounded up to the roof of the two storey building (brushing past one of the locals recording the firefight on his phone), he found himself above two operators sneaking through the undergrowth. Worn out from rushing up the stairs, none of the shots connected but it had drawn the attention of one of the Fusilers. Trooper 1-2-4 raised his rifle and started hammering the rooftop while the SAS hit the deck and returned fire. Once again, ‘Oscar’ swung his LMG into place and ripped the target to pieces.

The frequent bursts of fire had started to draw the attention of the rest of The Fox’s team. First the PKM fired a burst, sending splinters of rock flying everywhere. Then the recently reloaded RPG sent another round spinning towards dried up river bed. His aim was off but ‘Oscar’ was dealt a critical wound. Seeing the Fusilers trying desperately to extract their casualties and concerned about his own team’s injuries, the SAS leader, Cpt E____ signalled a withdrawal and started to cover the retreat. Both sides were blooded but the Taliban had been dealt a serious blow. A potential ally had been killed and a lot of additional fighters had been sent packing. Two wounded and one KIA was a worrying trade however.

As the smoke cleared, one of the civilians climbed the ladder to his roof, eager to see what had happened from better viewpoint. He had seen The Fox rush upstairs and then the sound of gunfire and was eager to see what had happened. Lifting the hatch, he was greeted with a strange sight. The floor was covered in shell casings and a blood trail went to one of the corners. However there was no body to be seen…

Overall a tightly fought game. The ISAF forces managed to get a load of points at the start of the game thanks to nailing the warlord so early. However the combined RPG, PKM and booby trap combo managed to claw back a few points for the Taliban. 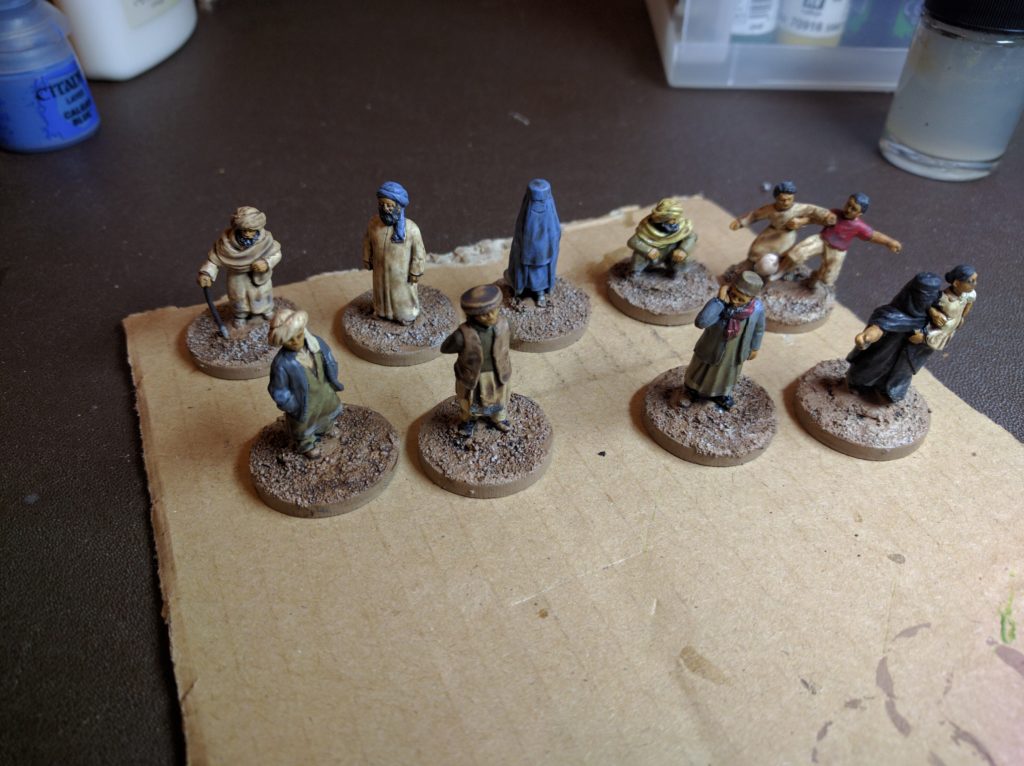 I showed a few of these figures off in my last painting bench post but I now have a few more done, about half way through them all. Its slow going as I’m approaching each figure individually while still using a similar colour palette to make them fit together aesthetically. Exception being one of the footballers in his knock off Man U strip. I have also realised how much my painting style relies on  copious amounts of washing. Overall I’m pretty happy with them so far and hopefully we will see them on the tabletop soon.

In other news, I’m adding static grass to most of my painted models something I’ve meant to do for a while. I also think we may see the return of The Lead Mountain!