As a fan of Spectre Operations, I’ve been spending a lot of time on the Spectre Operations Wargaming Group. Due to this, I’ve seen a fair number of people looking to get into the game for the first time and seeking advice as to what they should be getting in terms of figures. True, you could just get what you like

To help out, I’ve decided to throw some example lists together along with which figures you should get. There will be a mix of forces, from Special Forces in assault mode down to a horde of militiamen seeking to cause trouble. These lists are not perfect but think of them more as guidelines or places to start off from. Also ignore a few places where I disregard the gear limitations. Hopefully you will will find it helpful!

To reiterate – these points values should be used as guidelines. War isn’t fair and some my my best games have been played between two very differently sized forces. 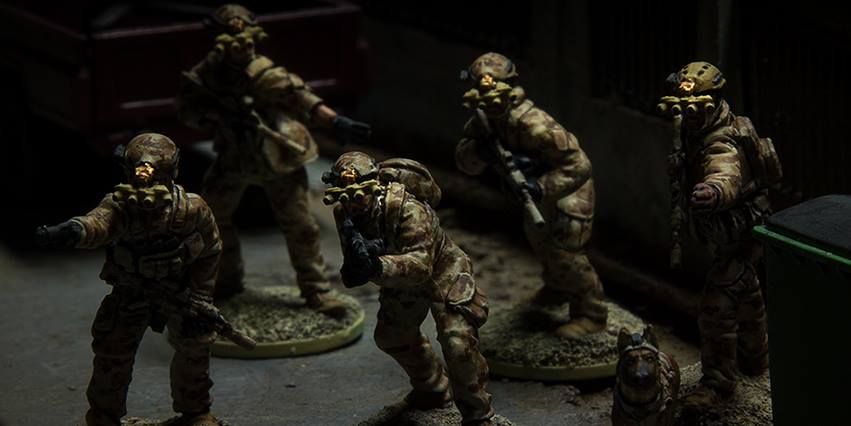 Sometimes you need to rock and roll. The Assault Team is kitted up to the nines with body armour and a wide selection of specialist gear, ready for doing some door kicking and owning the close quarter battle.

Well, why would you be looking anywhere else but the Task Force Operator range.

The squad has one specific role – fighting in close quarters (range interval 1). So you’ll need to get in close, using the carbines and SMGs if starting off undetected. Then once you are ready to go, use the shotguns and tools to breach, pop grenades in (stun is especially useful) and then rush (use the compact/red dot/laser combo to full effect). The main downside is the lack of grenade launchers and MGs but the AA12 will do sterling work as a close range suppression machine.

Like above but less ‘Murica, more unconventional breaching methods and vodka (if we go off stereotypes)

This isn’t a list for the subtle. LMG and MGLs form a good firebase while the rest of the team move up using smoke and stun grenades. Red dots and lasers help to improve fighting in RI 1. There is less gear 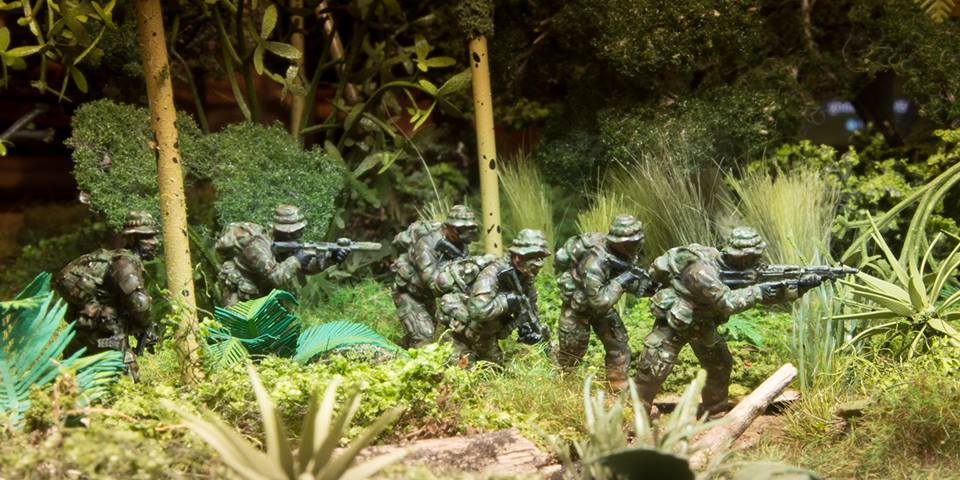 In contrast to the Assault Teams, the recon team is more for the player wanting to sneak around and do their best predator impression.

All have radio, pistol, frag and smoke grenades and personal medical kit

Form up the walking bushes into a two man sniper team, creep them into overwatch positions taking advantage of the ghille suit. Use the DMR figure to act as a crewman to the main sniper, giving him a reroll (unless the enemy get real close)

The other four operators will be your hammer, moving carefully onto the objective. Silenced weapons help to being with but once you go loud, the auto shotgun and the compact LMG will give you a load of suppression when pinning down the OPFOR.

Just be aware you’re lacking body armour so when you get hit, it will hurt.

Spectre Operations may talk a lot about special operations but its well suited to playing with conventional squads in a kinetic environment. This is the British army layout of an 8 man section that can be split into two fireteams.

Okay so this is cheating; I wouldn’t get this list from Spectre – the models are lovely but at the moment they are focused on more elite groups or militia. If you’re wanting to make a British Army force, Empress has a fantastic range of exceptional figures if you want some more conventional looking blokes available at http://www.empressminiatures.com/userimages/procart31.htm.

Split into two fireteams, perform fire and move drills to advance safely. Use the team with the DMR as a base of fire and use the other team to breach and clear. These guys have heavy body armour so you loose 1 agility but get a bit more survivabilty. 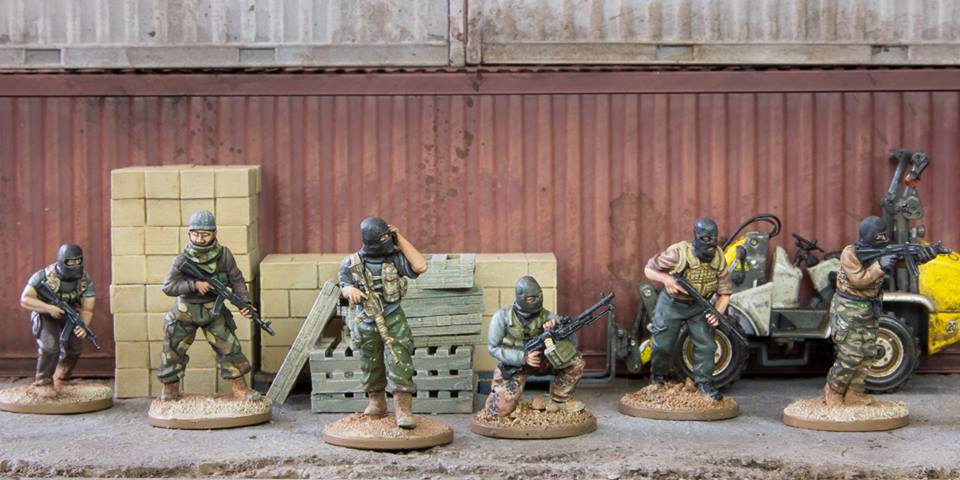 All have body armour

This is the entire Insurgent Range

The old tactics are the best; Find, Fix, Flank, Finish. MG’s and RPG provide a good base of fire while the sheer number of carbines and shotgun work well in the flanking force. You’ll need to stick to cover to avoid getting pinned down but you should be able 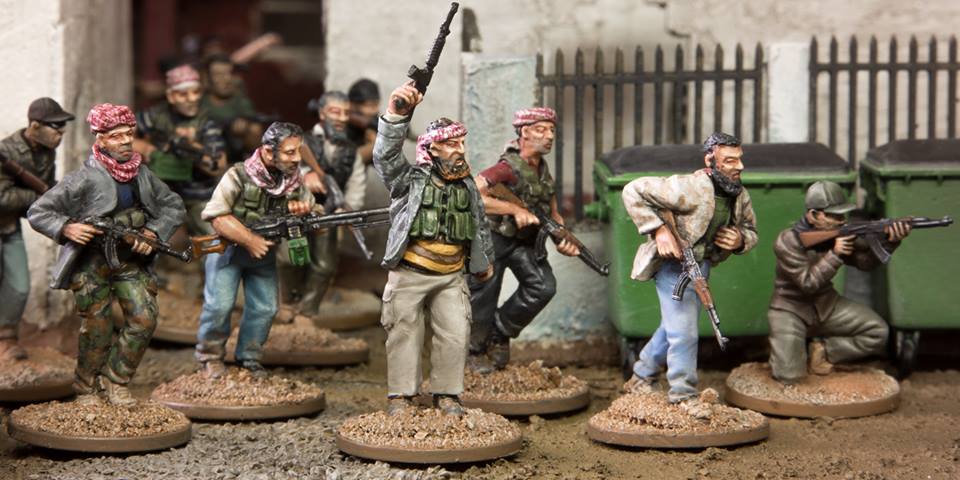 On first read, the militia are pretty weak. However, large numbers of cheap troops mean that you can easily swarm a more well trained force. In addition, the different factions (African and MENA) provide some different opportunities in terms of available models.

MENA Militia and African Militia will provide you with a huge number of figures. If you are looking for some better trained backup, the African Rebels, Insurgents and African Forces look visibly distinct from the rawer Militia soldiers.

Note: Militia armies are huge if you are trying to points match. Alternative ways to go up against the tooled up Elite forces might be to give them advantagous position or off-map support

Suppression is going to be your friend and your enemy. You’ll take a lot of it but using your commander and the large squad 10+ figures will give you some bonuses in terms of both command and in close quarters. On your side, massed rapid fire combined with RPG/MMG combo will help to even the odds.

The trained soldiers (be they former soldiers or rebels) provide a core of fighters with better stats while the Squad leader with the stimulant pack can keep your guys in the fight… for a little while longer. The technical is vulnerable to being shot at but its HMG will help with pinning down the opposition, no matter where they hide. 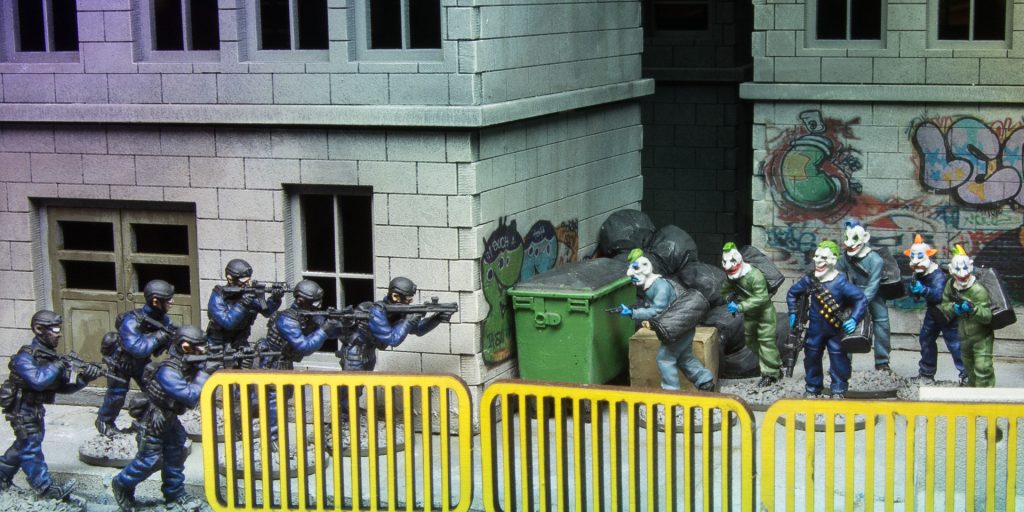 Get the urban terrain out, place the getaway car on the street and check your timings. This group is perfect for robbing the bank before fighting their way out

Use the guys with the carbines on the street while the SMGs and shotgun are used in the more close quarters area. Shotgun criminal is geared up for breaching. Then save the commander for when things go badly wrong and you need a few extra bangs.

All with Stun Grenades, radios, body armour and pistols

Breach, Bang, Clear. Stun grenade any possible hostile rooms, utilising the compact/laser/red dot combo. The Shotgun will get you through the doors, SMG has automatic for hammering suppression down when needed while the rest can put fire down.

This is just a taster of the lists that can be made for Spectre Operations. I haven’t even started to cover covert forces or go in deeper on the vehicles. I’d love to hear any feedback you may have, so get out there and have fun!