This is the first appendix to The Great Big Modern Wargaming Rules Comparison article. It is designed to be read after the main article. I also repeat the disclaimer: I have done some writing for Skirmish Sangin and I am listed in the Spectre Operations book as a play tester.

First of all, I want to say thank you for all the words and suggestions that came out of the main article on Facebook, Lead Adventure and the comments under the article. Glad to see all the work was useful and I’ll be looking into some of the rules suggested for a future article.

So first up, someone in the comments asked about campaign systems. I’ve added the section below using the same format as the original article. I’ve also added a section covering scenarios.

Do the rules include a campaign system? 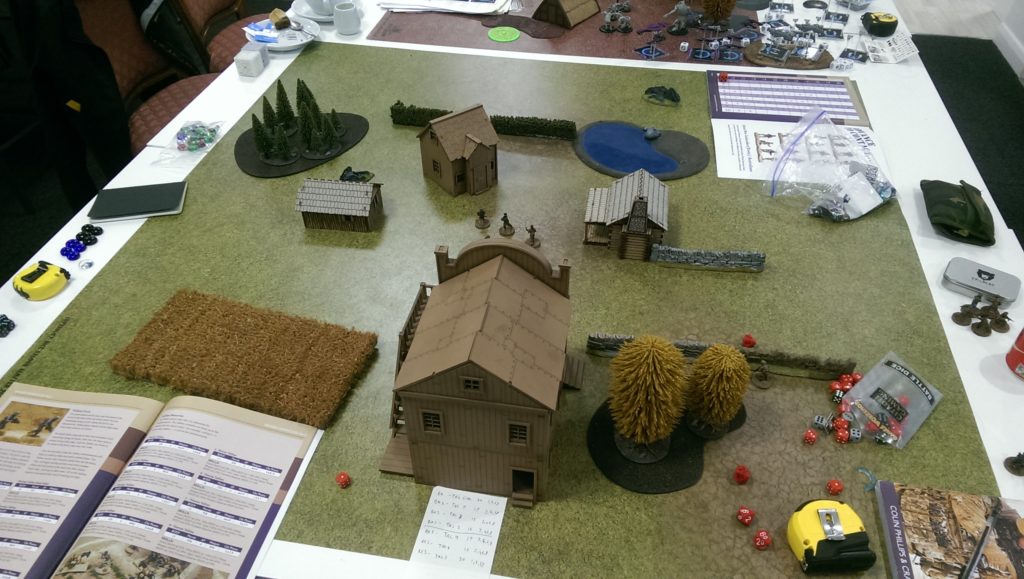 Black Ops has multiple pages how to run a campaign. It uses an Intel system. Intel is gained after winning a scenario and based on how much a player has gained, they can attempt to launch a final mission. It’s a core idea rather than a deep and complex system but it does a really good job of making it feel like a black ops tv series leading to a finale.

Its two sides of A4. No campaign system is included

There is an entire Appendix of the rulebook covering the campaign, including rules for both regular and insurgent forces. The rules cover a “campaign turn” from selecting a mission through playing the game to rolling for casualties and rearranging your force.

OSC currently does not have a campaign system.

Dispatches 1 adds a detailed system for campaigns, letting you gain experience for each soldier in a battle before spending it on stat upgrades, experience packages or promote them. The rules also cover replenishing forces after casualties. The system is designed best to create a platoon sized force and then take portions of it out into each game.

Spectre currently does not have any campaign system but I would not be surprised if it turns up in a future supplement.

Do the rules include any scenarios? 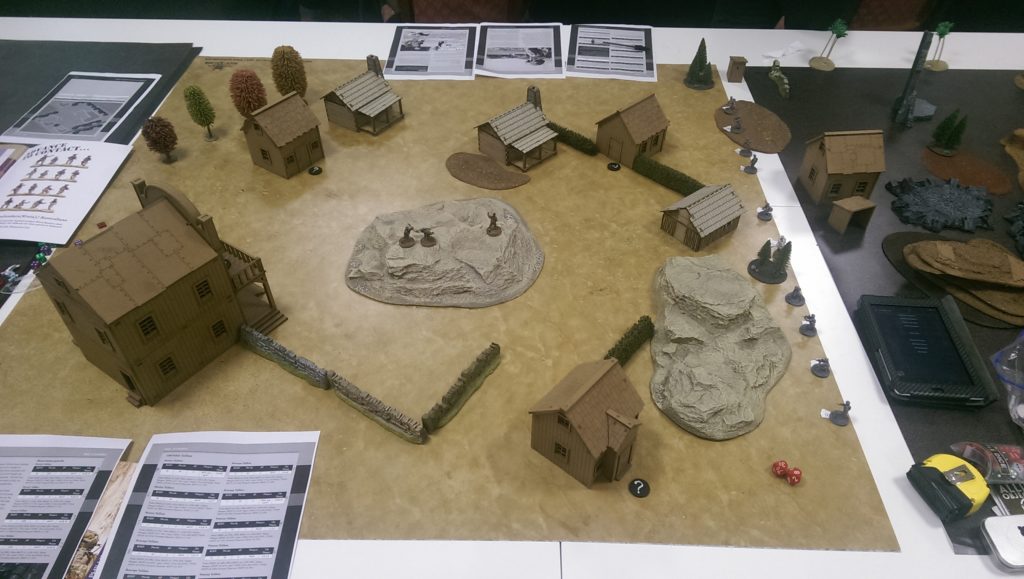 Black Ops has a set of systems for creating generic missions rather than pre-made scenarios. There are 6 styles (from raids to surveillance) each of which has 6 prompts (so VIP missions might be anything from an enemy general to a captured scientist) and can take place in one of 6 generic areas which includes a map.

Its two sides of A4. No scenarios are included

Seeing as there is no points system, the main way of playing is using the pre-made scenarios. There are 8 scenarios in the main rulebook and each of the 7 supplements is packed full of them.

OSC has a mission generator in the front of the book using D6’s that determine the point of the objectives you placed during setup.

Skirmish Sangin has a huge number of scenarios. The main rulebook has two and the four other books include a large number as well. Each one contains all the stats needed for each character and most also include numerous special rules and a map. In addition, there are various free scenarios on the Skirmish Sangin blog.

There are 5 scenarios in the main rulebook. There are also two pages of advice on making your own missions 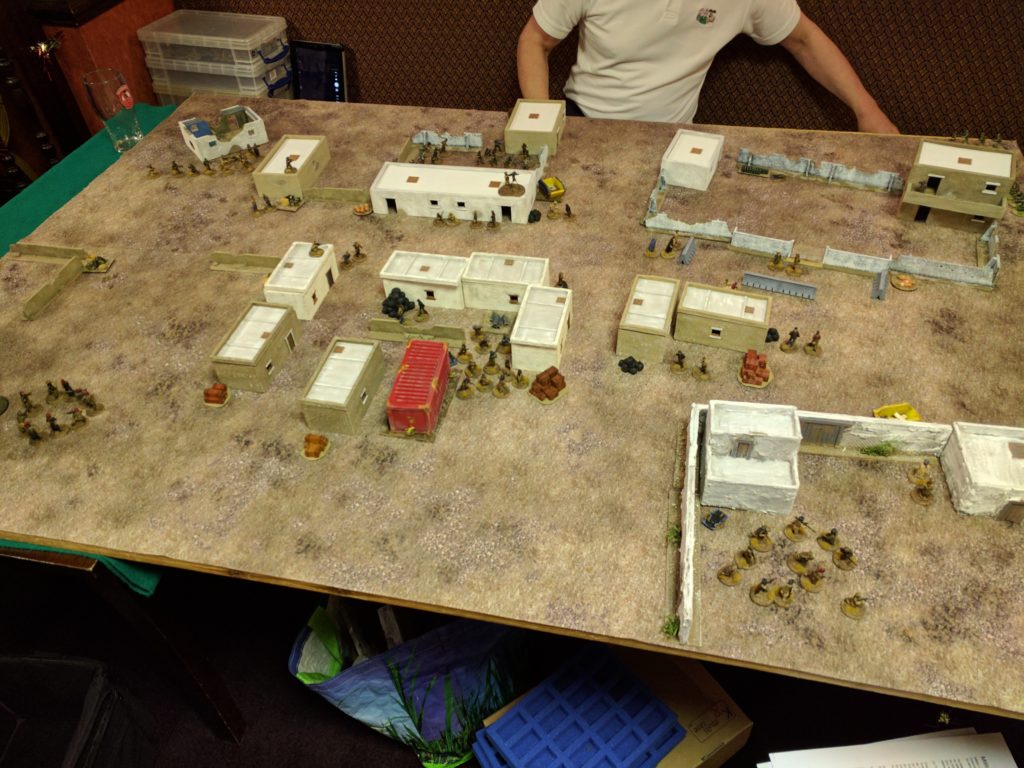 This week’s wargaming took me back to Spectre, demoing the game for the first time to two members of the SESWC. I also wanted to put on a bit of a show and get lots of insurgents on the board. I had originally planned for the game to be 4 sections of Professionals vs an equal points value of militia and trained but I very quickly found myself running out of figures (and time to paint more). Luckily, I had overestimated the number of players that would be taking part and so my points values worked out great against only two sections. Moral of the story: stop panicking.

This mission saw the NZDF commitment to Bazistan moving into an area to destroy weapon caches and confront the opposing force. 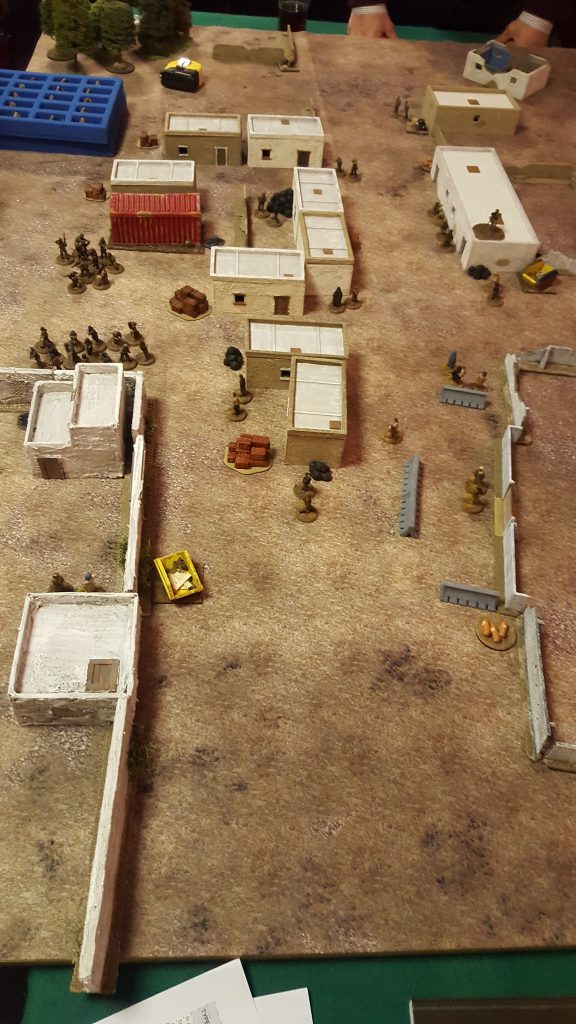 The game started with the Kiwis advancing onto the board behind the diplomatic compound giving them plenty of time to creep forward around the unalert militants. The two sections broke down further into fire teams. Two teams went south towards the main street (with one team vaulting the wall into the compound itself) while the other two crept along the north wall. However, as one of the southern groups crossed the street, both an insurgent sniper and HMG weapon spotted the team and became alerted. In the following turn, the HMG hammered down the street. It caused nothing more than a few points of suppression but it did alert every figure on the board. In response, the other fireteam opened up with its Compact LMG and brought the gunner down. 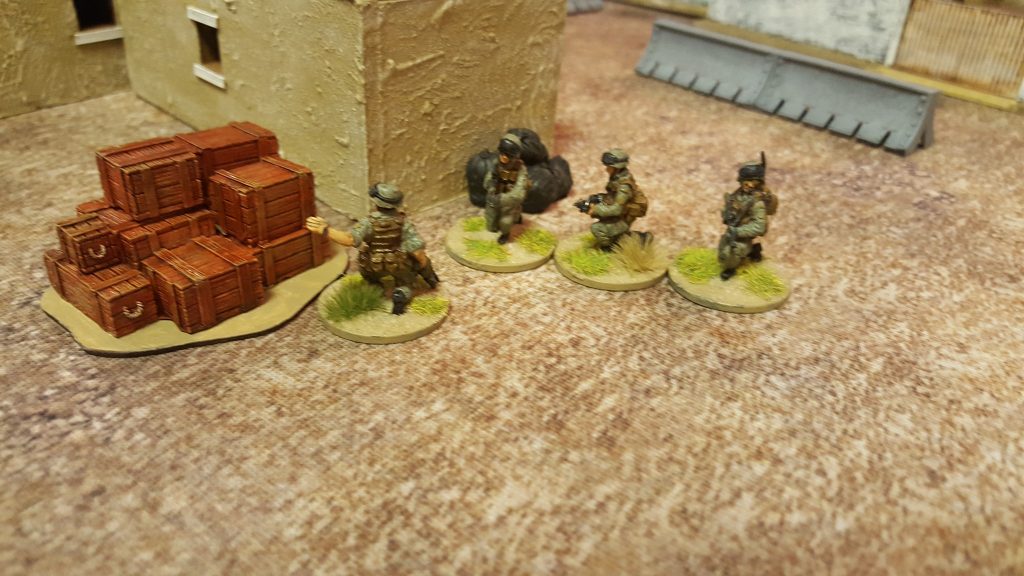 Drawn towards the fire, other militant forces started to stream through the village. The militia led the way, intending to mob the better trained and equipped New Zealanders, while the trained groups waited back. One mob streamed around the buildings towards the southern most fireteam and managed to put some fire down. In response, the Kiwis opened up with an LMG and Grenade launcher knocking most of the mob down and getting them some breathing room. In the next turn, section 2 relocates with one fire team falling back to the security barriers while the other climbs onto the first floor to provide some top cover. From this cover, the section managed to put a lot of fire into the mob coming down the main street and wipe them out. They also managed to put a lot of fire into a group that came streaming out of the southern most courtyard and knock out all but three of the militia. 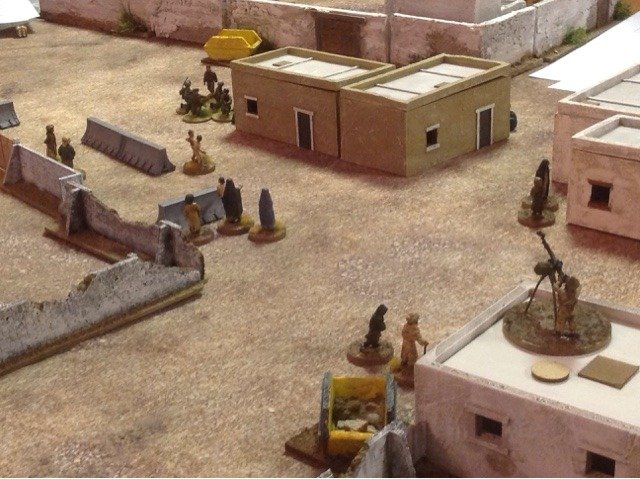 On the northern edge of the board, section 1 had managed to skirt round the compound and get close to the courtyard where another arms cache was being held. However, before they could do anything, trained fighters started streaming over the wall (except for one soldier). A round of shooting managed to kill 2 but more appeared, forcing the NZ player to frantically get out of the road and into a piece of cover. 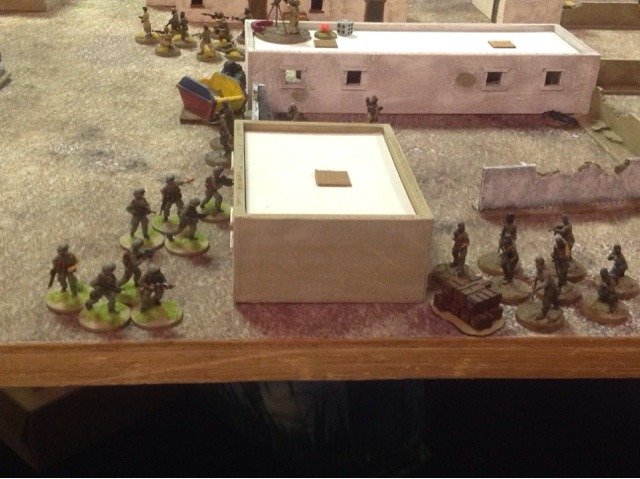 Now at this point, I was ably assisted by a friend of mine at the club walking over to the game and offhandedly commented “Hey, can’t that sniper see someone?”. A quick check, a lucky dice roll and one member of section 2 was lying down bleeding out. The fire team drags their injured comrade back behind the concrete walls of the diplomatic compound. Up top, the overwatching team causes casualties to more of the militia but they just keep coming. The three fighters left alive suddenly prove their worth, hammering MMG fire and an RPG into the overwatch team and causing more casualties and downing two more professional soldiers. 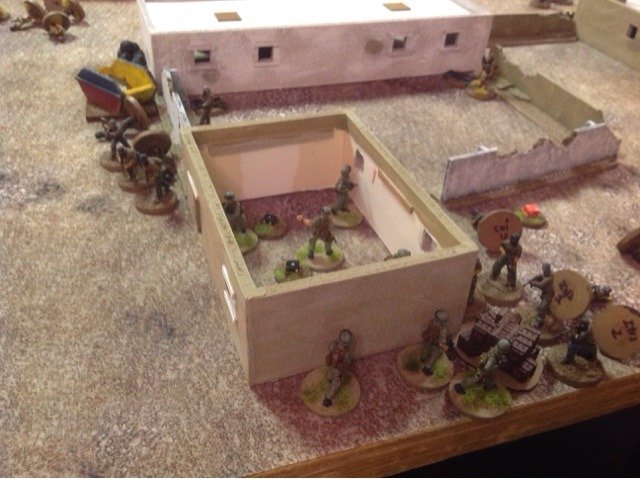 Back in the north of the board, one of the two NZ fire teams crept around the top of the board and got into a close quarters fight with one of the trained squads. The fight downed another Kiwi but also cost quite a few of my unarmoured troops including the squad leader. As the last move of the game, one of my opponents noticed I’d left my commander by himself and within line of sight of the Minimi gunner in the surrounded building. Three round burst later and my highest command value suddenly dropped.

As we ran out of time, its was obvious the militia had taken a beating but only one arms cache had been destroyed. This is the first time as a militia player I’ve managed to make a huge dent so I’ll be doing much more mobbing in future games

My main takeaway? THE FOX (and his spotter) STRIKES AGAIN! 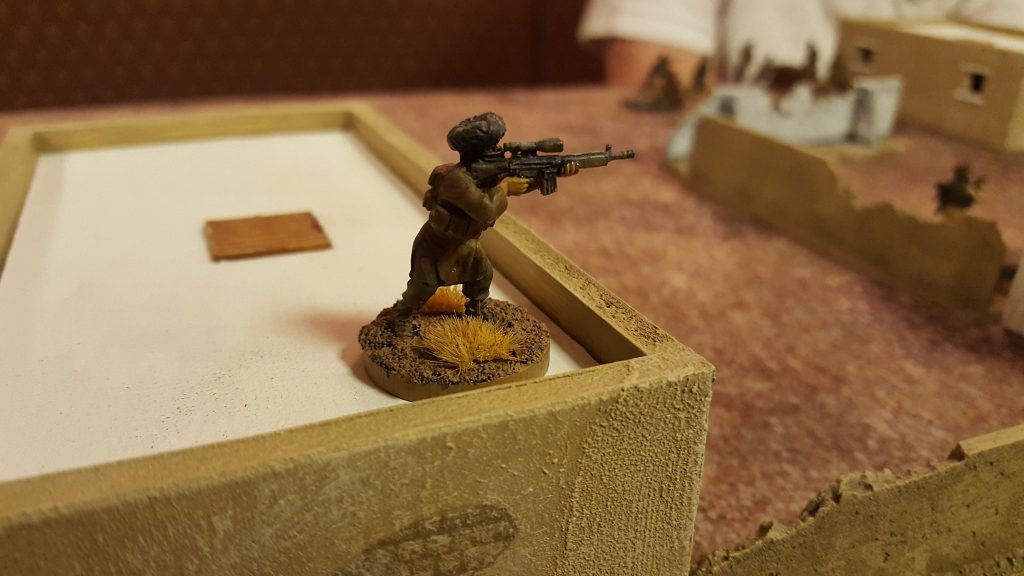