As if summoned by my last post about them , my Spectre technical order turned up.  I know some people in the Kickstarter have been waiting a long time for these but don’t worry, I think they were worth the wait. I’m going to do a quick overview of them and the weapon systems I’ve picked up in my first order.

Before I start I just wanted to comment on the service. This order arrived via 1st class delivery and was wrapped in protective bags for all the components. Larger weapons with longer barrels were wrapped in such a way to prevent major components from bending or breaking which can be a frequent worry when purchasing models.

There are currently two models of chassis that can be chosen: Alpha and Beta.

The Alpha chassis is the older version of the pickup, closer to what have been filling our TV screens from the early 2000’s onwards. It comprises of a resin basic model with resin wheels, bumper and tailgate. The frame behind the cab and the wing mirrors are metal. 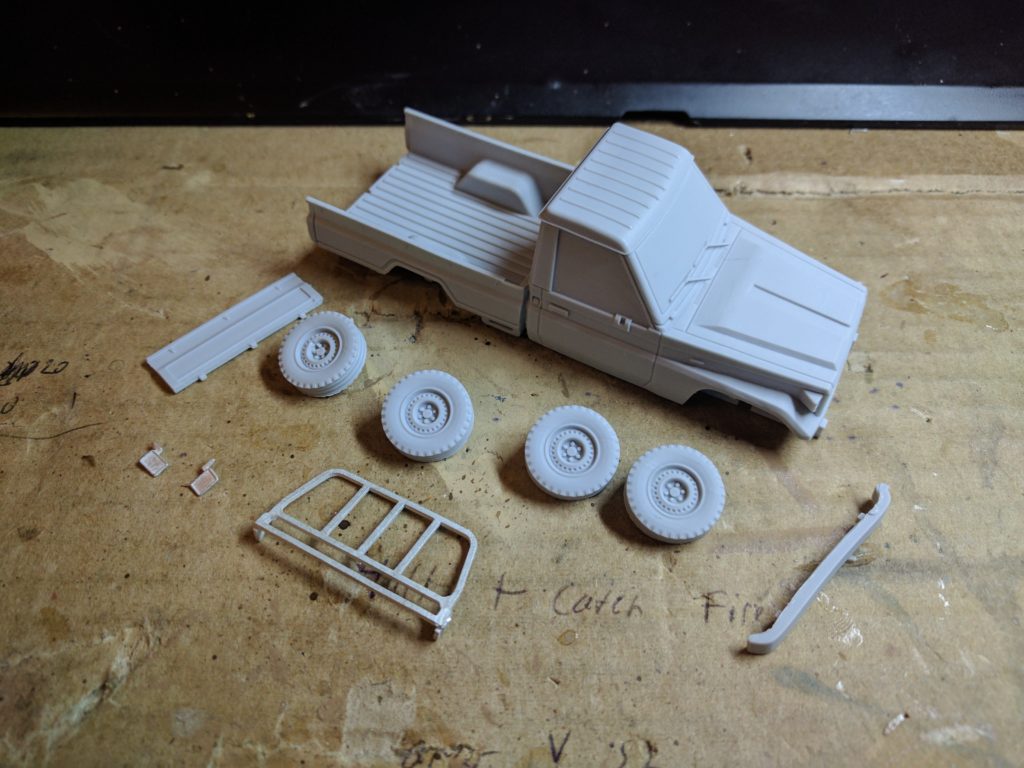 I have to hand it to the guys at Spectre, the Alpha was a dream to put together. The main body of the vehicle is incredibly crisp with lots of detail, the slot fit the metal details great and even the wheels went on with no wobble. 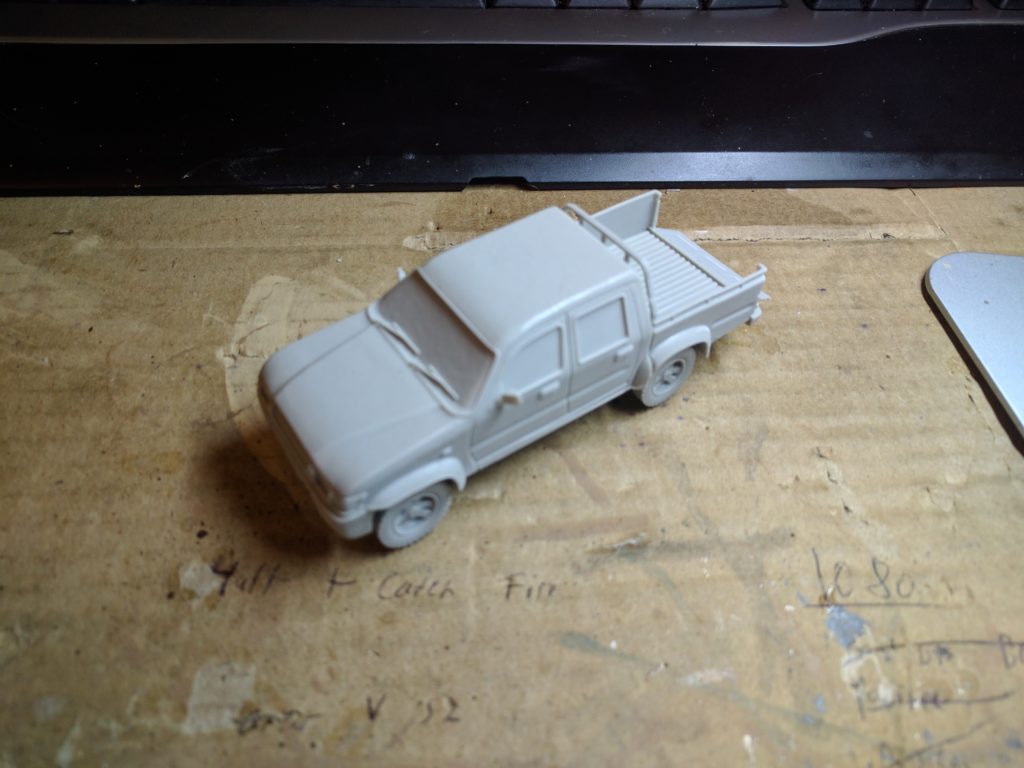 The Beta is a more modern vehicle with a larger cab and small transport bay at the back. Unlike the Alpha, all the details are resin. There was a bit more work to be done to prepare this model and I noticed the resin had an oily sheen to it that needed washing off. In addition, the rear tailgate on mine had some very thin sections which had almost been broken through – annoying but should be easily covered up when painting. Despite the issues it’s cool to have a two styles of vehicle available at launch.

The Guns and Crew

There are a massive range of weapons currently available. However, wanting to keep under my hobby budget for the month, I only picked up a smaller selection. As a basic rule, all of the weapons can be mounted in both chassis types or on a separate base as a static heavy weapon emplacement. Weapons and crew are bought separately from the chassis on the Spectre website making it easier to increase your options when building forces without requiring you to buy a load of the vehicles.

There are two types of HMG available, the Russian DSHK and the American M2. As they are the most commonly used guns in most of the scenarios I own, I picked up one HMG for each vehicle. 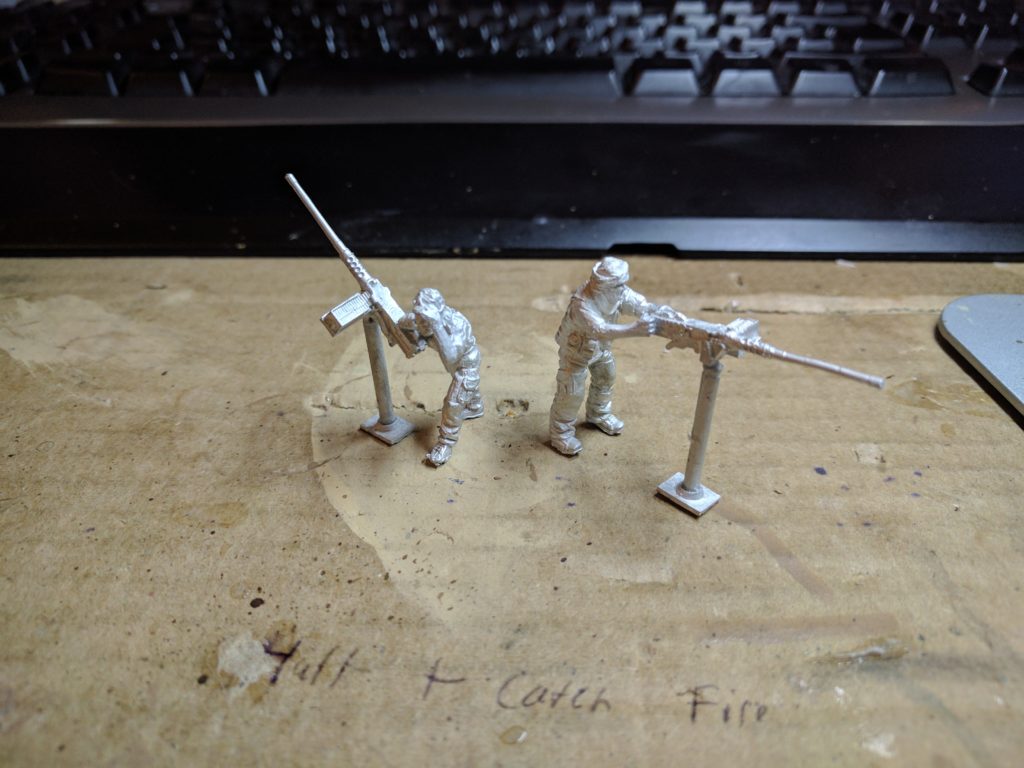 The M2 is mounted on a high pole which has a rectangular base for sitting on the truck bed (the pattern on it matches the pattern on the bed so it sits properly). There is a slot in the top of pole, letting you elevate the gun when mounting. There is a minor downside – the M2 doesn’t have spade grips on the back of it. 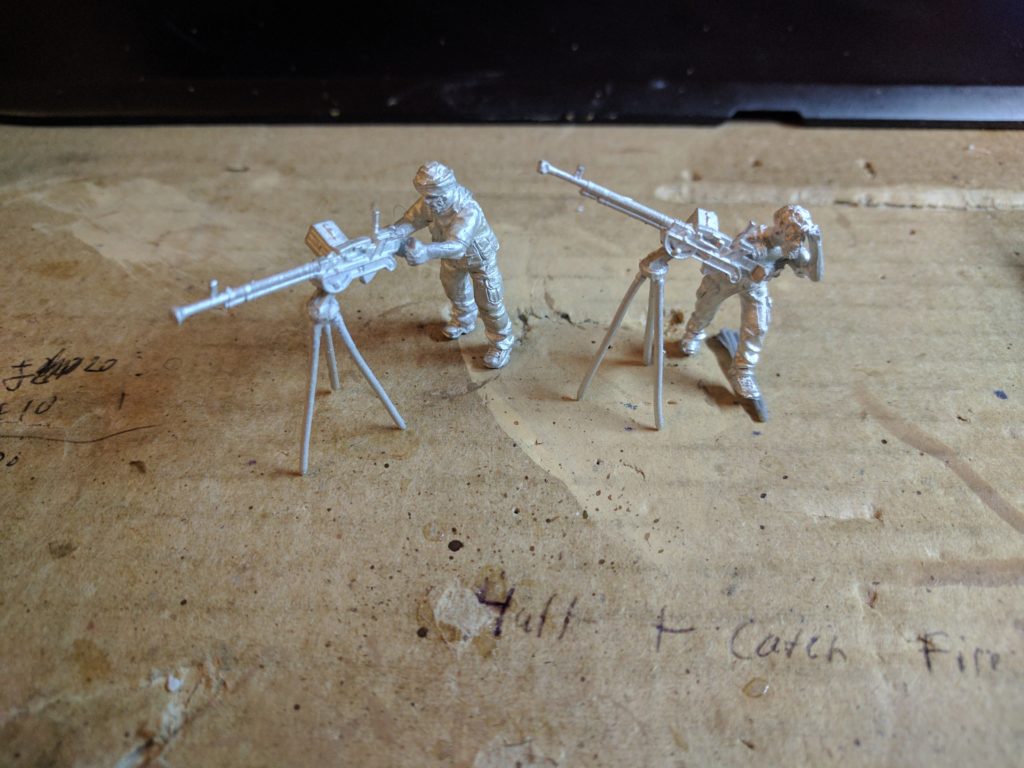 The DHSK is on its usual high mount. The tripod come with two legs already attached requiring only the final one and the gun to glued on. The gun itself fits onto a point, while the gun itself has the elevation dial meaning it will look right no matter what angle you put it at.

I’ll also mention the crew figures for these guns. As you can see there are two available, one in a firing pose and one resting on the weapon (or some other surface). I struggled to get the crew man resting on the guns to balance properly but I think part of this was my own lack of skill. You’ll need to trim the DSHK slightly for the firing gunners hands to fit in the right place.

As I’m wanting to hot swap the various weapons, I’m going to mount the gunner and the MGs on a small rectangular base to just give them a bit more strength and stability and also to prevent any bipod legs from bending. 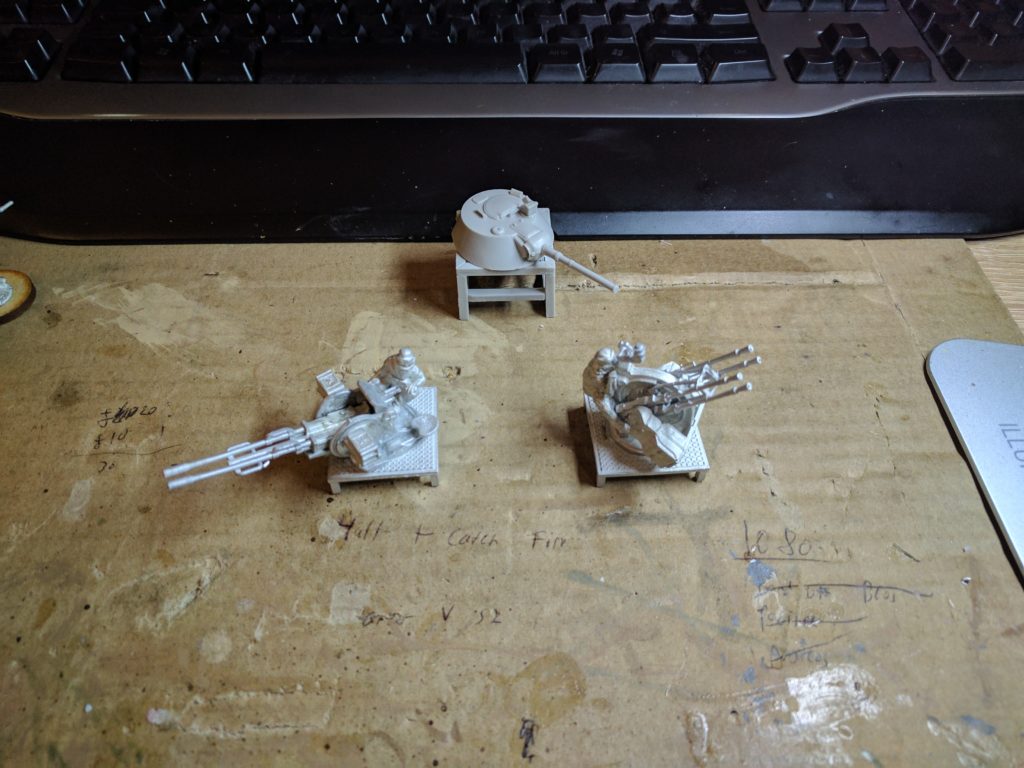 Although the HMGs will be the most commonly used weapons, it’s the bigger end of the scale where the real fun begins.

The heavier AA gun requires a bit of assembly and I ended up using a fair amount of force to get it into place. However, once assembled it sticks together, forming a nice weighty gun that looks great when on the vehicle. The separate crew member means you can build it empty if you want it to decorate the battlefield. 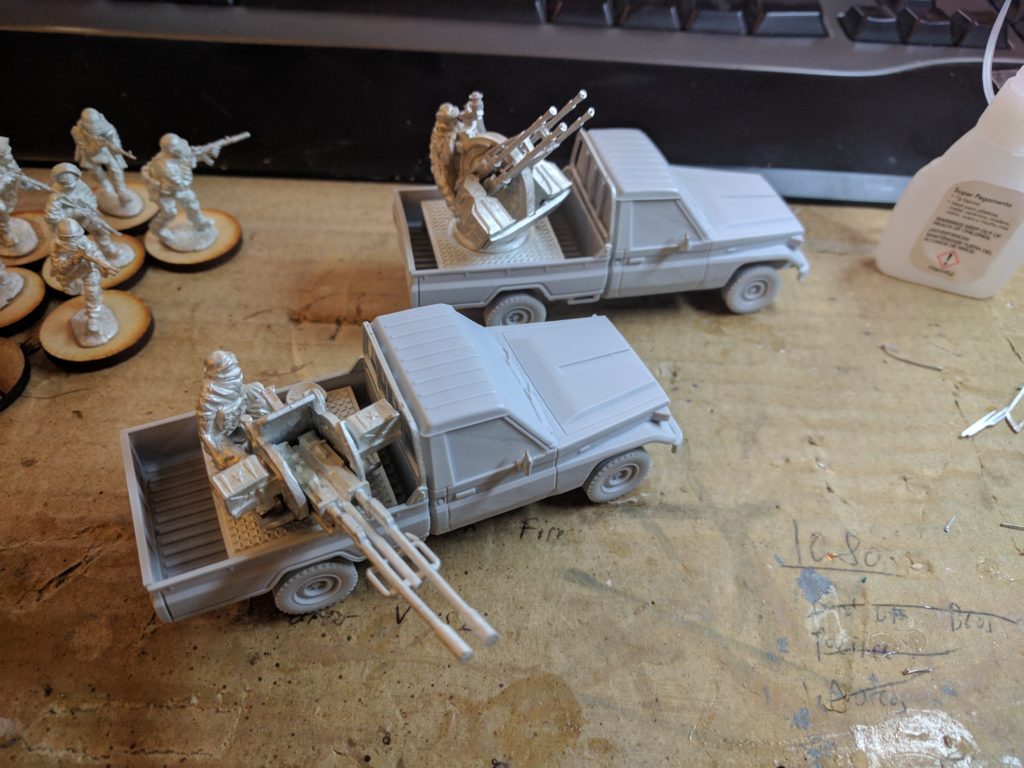 So mixed bag with this as it comes out the wrapping. It’s a wonderful and characterful gun, perfect for making your force look rather ragged and good to go. It’s also easy to assemble. However, once assembled it seems to be a system that is designed for gluing in place. The turret has some rings to prevent the turret from sliding laterally but nothing holds it in place from falling off if tilted. I’ve also found the frame itself doesn’t sit particularly well. Worse news is that the crew member underneath doesn’t seem to fit when you place the frame in and rest if on the wheel arches. None of these are problems if your glue it in place but I’m going to do a few tweaks (adding a base, extending the struts) to make it swappable. 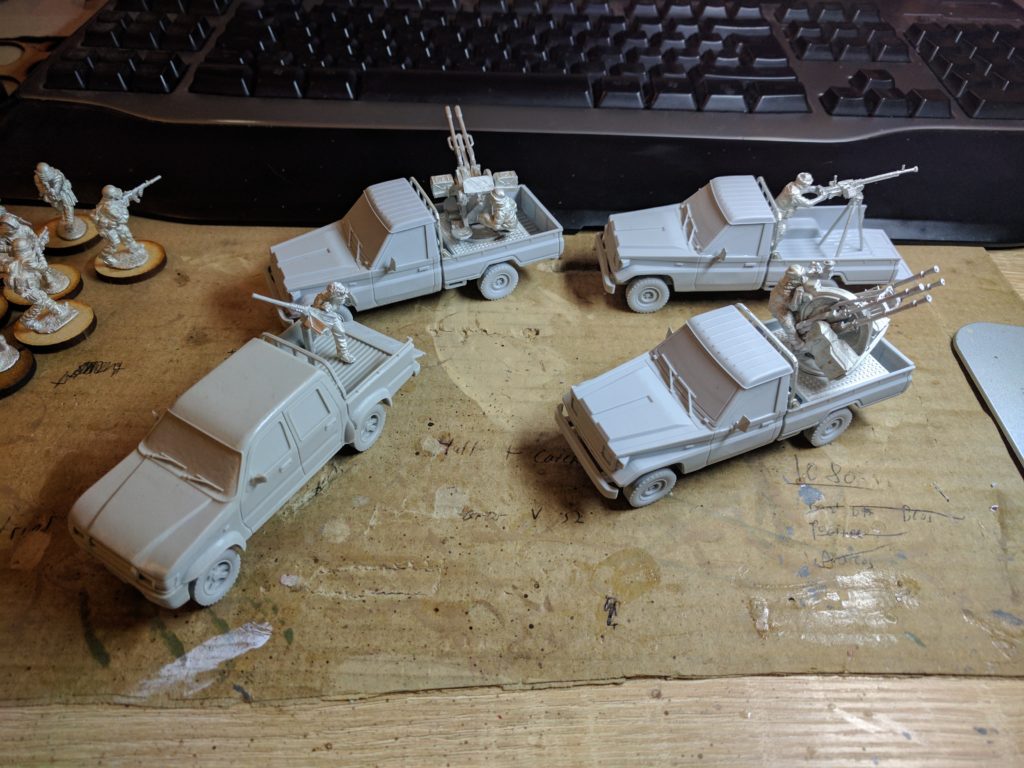 Overall, the Spectre technicals are a great start to a new range. Apart from the minor issues, all the models are beautiful to behold and will be fantastic additions to anyone’s collection.

In terms of economics, £18 for the chassis works out fine (the closest equivalent is Empress’s bare-bones technical at £15 but with less detail to it). Weapons and crew are priced sensibly, with the £1.99 .50cals being perfectly priced for use in conversion jobs.

I’ll add a second article once I pick up the remaining weapons which will be soon based on my first experiences. I’m also very excited for what comes next. Some stowage items and passenger figures would be awesome but we shall see what Spectre come up with. As always, I’m praying for miniguns.