Scenario 12 of the Bazistan Crisis – An RAF F35 Lightning II enforcing the no-fly zone has suffered an engine failure and has crashed somewhere in the rebel held zone. Unable to deploy conventional CSAR assets, British command has ordered an SAS team already in country to find and extract the downed pilot. Upon arriving in the area, the special forces troopers spot some mobile tangos also moving to find the pilot. It would now be a race to find where the pilot is hiding out 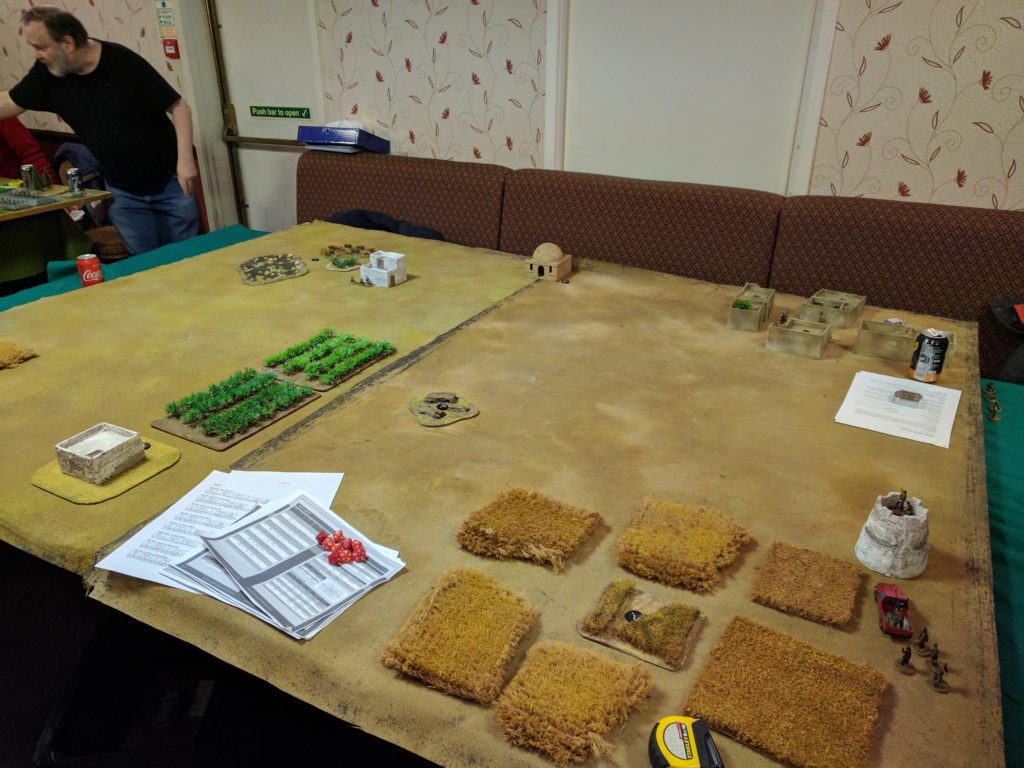 Coming back to Skirmish Sangin after a short break where I’ve spent most of my time writing scenarios rather than playing them, I decided to go all out. Big table, vehicles and everything. After dispensing with my original idea, I instead decided to send us off looking for a downed pilot. After lots of comments about “That’s a big board” (useful seeing as vehicles move rather quickly), we set down and started playing 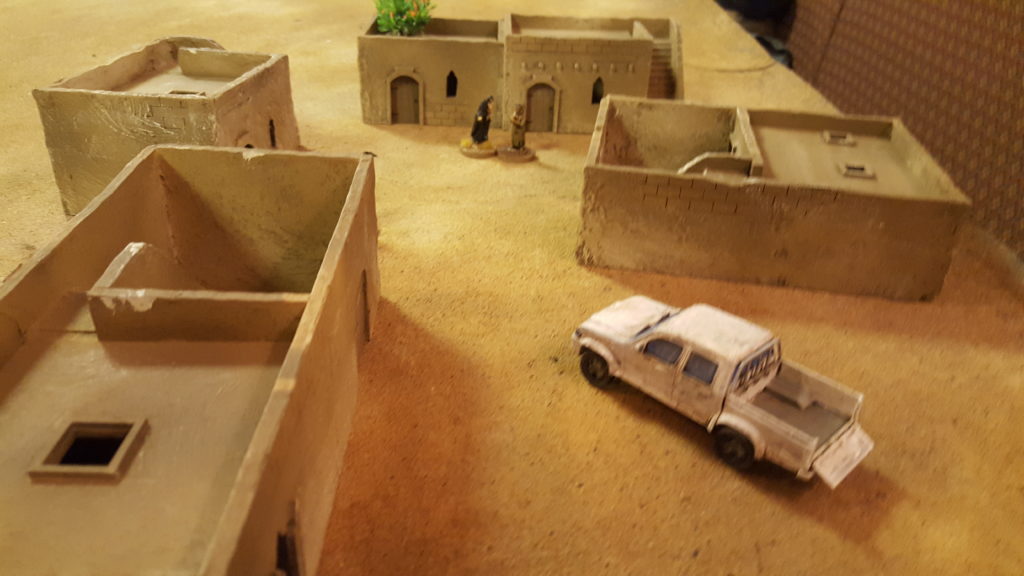 The SAS begun in the village, getting ready for moving into the rest of the search area. In the fields, the rebel band was milling around next to an old watch tower, climbing aboard their technicals or setting up their machine gun to overwatch the area. One of the fighters moved north to scan through the crops but found nothing of use. 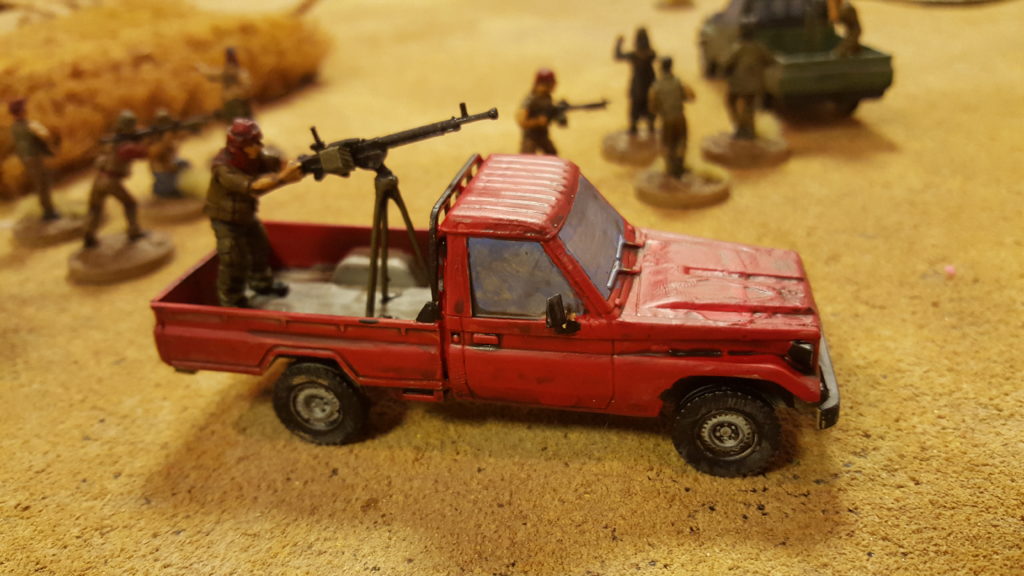 Across the board, the SAS drove north heading to the abandoned mosque. Coming to a stop nearby, the team leader disembarked and looked inside. With a whisper of a codeword, the pilot revealed himself. He was swiftly bundled into the SUV but the sight of potential pursuers caused the SAS to pause in place.

Seeing the cloud of dust from a high speed vehicle, the rebel leader shouted for his band to roll out. Streaming across the desert, the two vehicles separated while the guard team (sat in the tower) started trying to accurately spot the target vehicle.

However, the SAS had easily drawn a bead on the pickup trucks. A second trooper disembarked, dropped to a knee and opened up on one of the approaching vehicles. A burst of fire ripped the vehicle to pieces blowing it up and immolating all the passengers except the rebel leader. This cunning veteran had dived out the vehicle just before and was now lying prone on the desert floor.

The other vehicle tried to spot the source of the gunfire but the gun crew were distracted watching the burning wreck of their comrade’s ride. This distraction was deadly – a second burst of fire (this time from the squad’s LMG gunner) shot up the crew compartment wrecking the vehicle and stopping it from functioning. The passengers bailed out, going to ground around it. 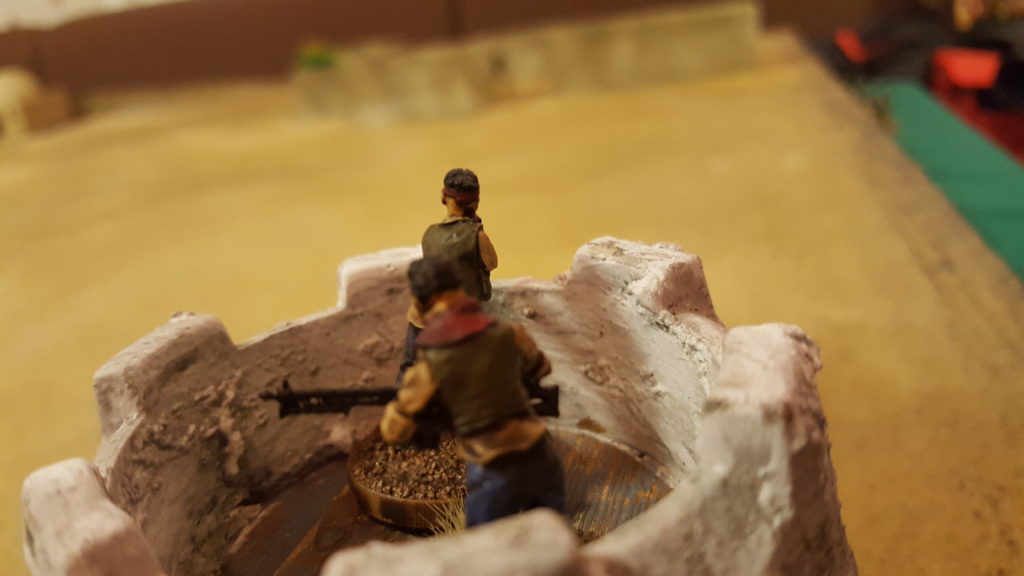 However, it wasn’t going all the SAS’s way. The guard team in its tower was putting fire down on the SUV, with the combined PKM and assault rifle pinning the troops inside down. In an attempt to respond, the JTAC in the squad started trying to call down a hellfire from an orbiting drone. Despite the visible threat, the drone operators were in a no go situation, requiring more details from the operators. The JTAC was happy to give them, in addition to a few choice words.

The rebel leader was, to bit it mildly, a little annoyed. He had been robbed of his prize to parade on TV, two expensive weapon platforms were destroyed and several soldiers were either dead or injured. Angry, the battle-worn fighter levelled his AK at the figure behind the bonnet of the SUV, took aim and fired a shot. He saw the target drop behind the vehicle but before his eyes the injured man crawled out of sight. 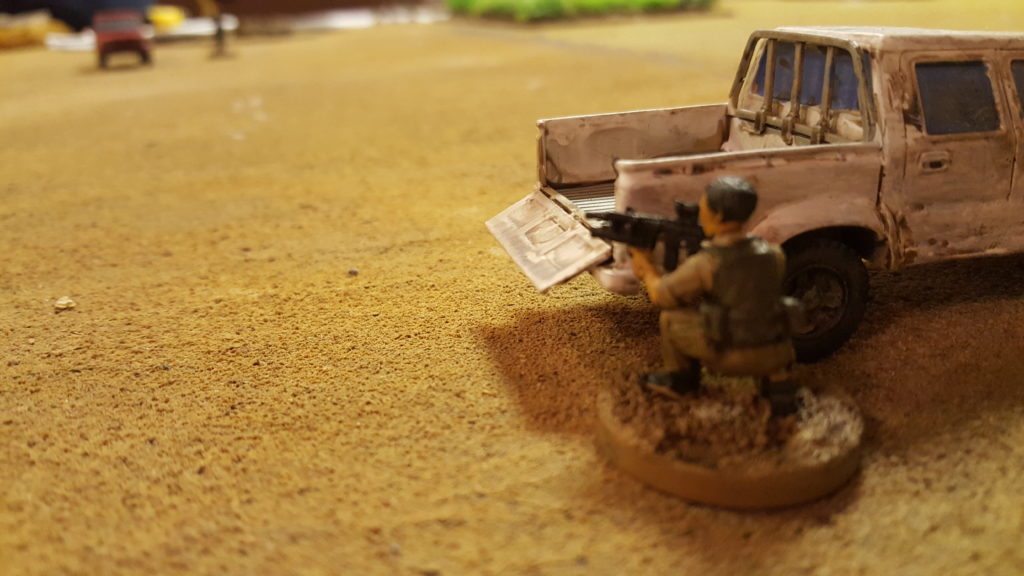 With an injured squad leader (mostly alive due to his body armour) and still under MG fire, the team was now all in cover behind the vehicle and trading shots with rebels. The UGL punched out a grenade that took two more rebels down, leaving 3 of the attacking force still alive. The second squad leader didn’t want to become stuck out in the wasteland so he and his buddy sprinted off towards the village in the hope of finding cover and a better angle. 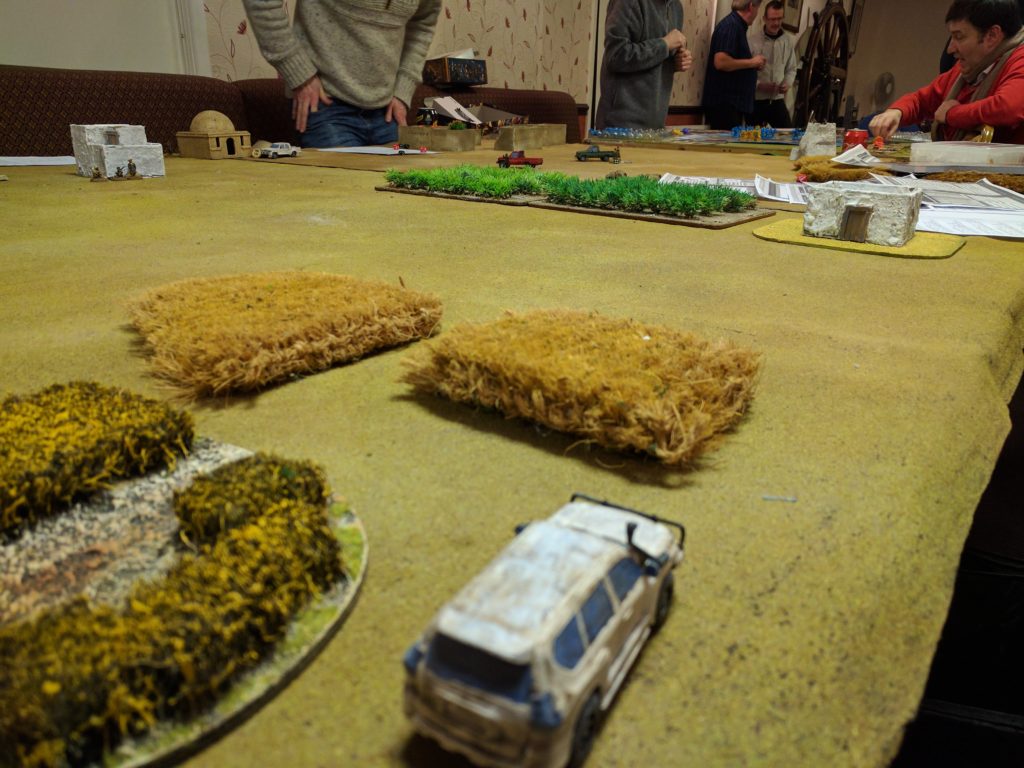 Also around this time, another white SUV was seen off in the distance. This was the second team in the SAS element, having been alerted to the ongoing fight. The offroader bounced across the plains, pulling to a stop near the edge of the crops in the centre of the play area. The second team then started to disembark, providing a distraction to the guard team in the tower. The PKM swivelled to face the new threat.

The let up of incoming fire allowed the JTAC to do his job more easily. Transmitting the target co-ordinates to the help flying aboce,  nothing initially seemed to happen. Nothing that is, until a titanic explosion ripped the tower apart as a hellfire missile found it’s mark. With the gunfire slackening off, the SAS started to prepare to leave.

The rebels were shaken but not yet out the game. The force’s leader became pinned down in a crossfire, lost his nerve and then left the field of conflict. However, the other squad leader sprinted up some stairs to a rooftop. Using this advantage, he and his partner in crime riddled SAS team 1’s SUV, causing the pilot to bail out and potentially giving them a long walk home. However, before they could finish the job, Team 2 landed a 40mm round on their position putting them out of action.

The AO now clear of enemies, the SAS were victorious. Now they just have to fix their holey vehicle and get out the hinterlands and back to civilisation. I’m sure this is one story the pilot will be telling for a while.

Overall we both had a fun time. It was great to get back into playing Sangin after a break and it’s still my favourite system to play.