As a way of playing more wargames and testing out out a few rules I’ve been writing, I’m instituting a weekend wargaming session. Ideally it won’t always be solo but that’s how the first one ended up occurring.

Expect to see some weird and wonderful rules, as well as the vast expanses of unpainted MDF as I get my act together. On the other hand, it should also be pretty entertaining.

This first game was played using Skirmish Sangin with a few home rules. 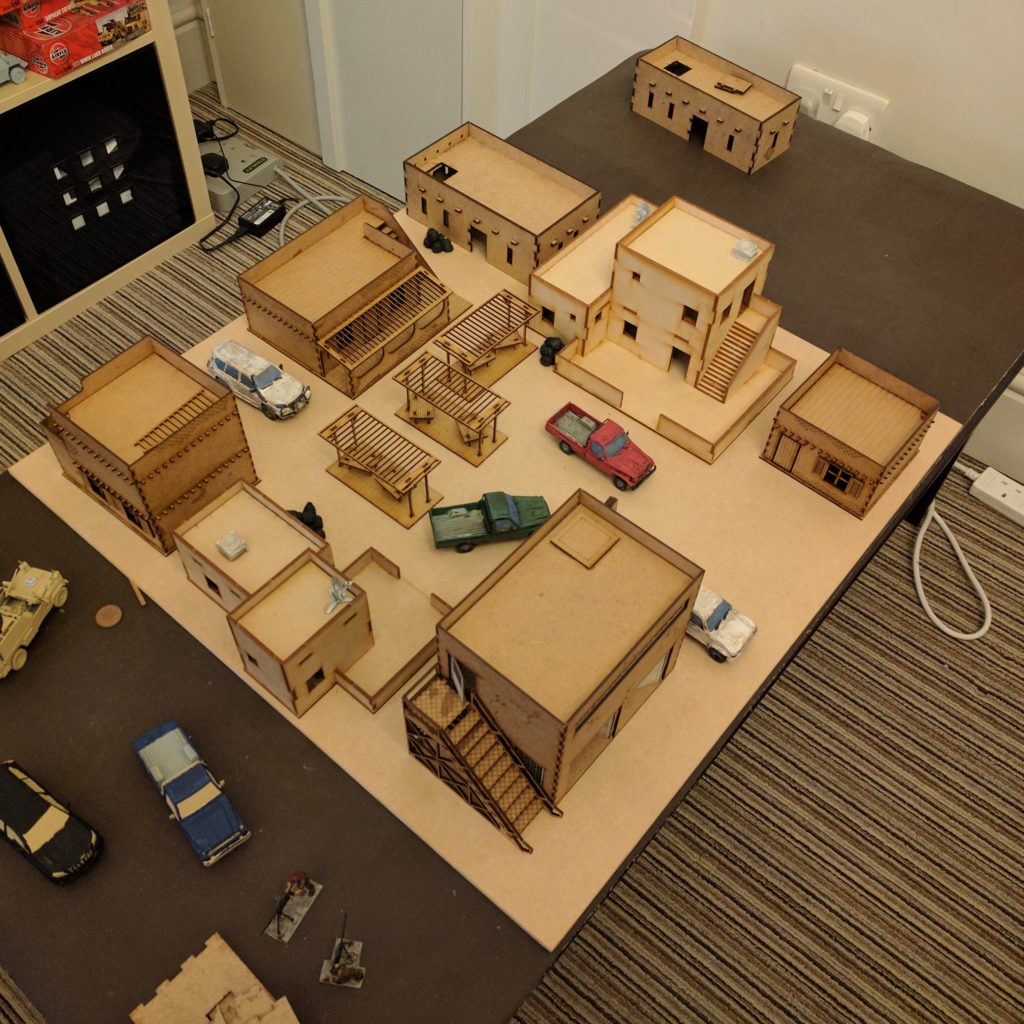 A market in one of the slums on the outskirts of the city is also the home of one of the militia leaders that have taken control of several neighbourhoods. Commando Global Solutions have been contracted by an OGA to snatch this leader, as well as his 2IC in order for them to be brought back for interrogation. Due to the leader’s movements, the only time available to snatch him was during a daring daylight raid, timed to match up with the leader’s visit to a local cafe.

Wallace and Renault arrived early in order to recon the situation. The other four operators (Davison, Bowman, Sullivan and Oldham) arrived via a pickup truck driven by Thompson. The plan was to disembark, sneak through the square, breach the cafe, snatch the Commander and then escape via the pickup. 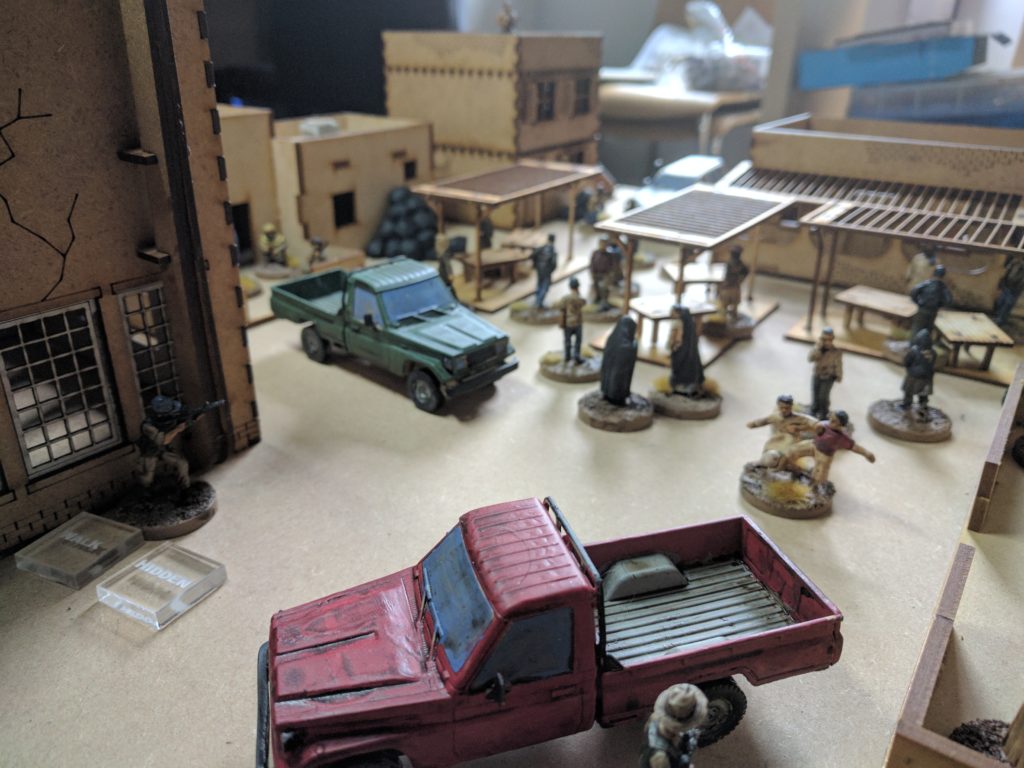 Having disembarked, Davison crossed from cover to cover and headed to a position behind another parked vehicle. Bowman matched him moving carefully up the wall of the old industrial building. Across the square, a rebel fighter named Dar sat on overwatch while two more moved around the bustling market. Dar’s position on the rooftop prompted Renault to spot him and transmit his location to all operators on the board.

However, Dar was not completely unobservant and noticed the sudden arrival of the tall westerner (Davison) entering the area. Squinting a little more, he noticed the danger and turned, ready to set off the alarm. Sensing he had been rumbled, Davison dropped the pretense and sprinted into the crowds in order to seek some cover. This caused a scuffle, drawing Al-Bashar (the commander) to the window. 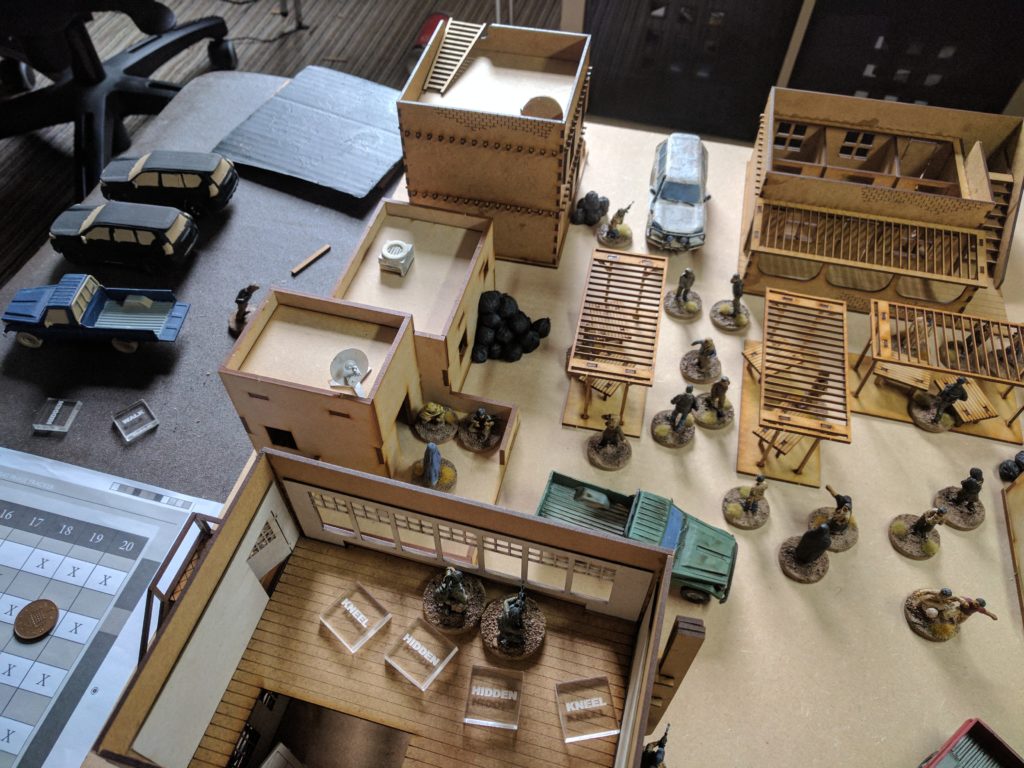 Fearing the mission was about to get rumbled, and wanting to win the fire fight before it started, Wallace threw off the camo netting and opened up with the Minimi at Dar. The burst instantly killed him but all pretense of stealth had now been dropped. 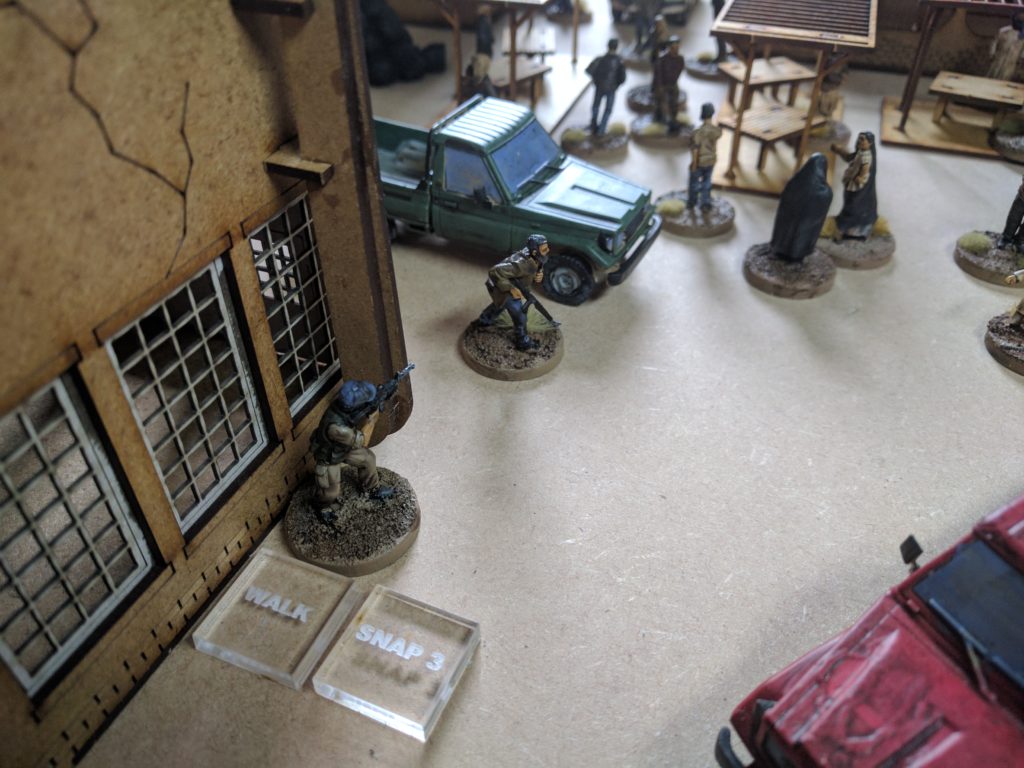 Below, another fighter named Zafar entered the area. Hearing the MG fire, he began to run round the building in order to reach the stairs. As he rounded the corner, Bowman snap fired and dropped the enemy with a well executed Mozambique Drill. Oldham swiftly ran past this fight and got into cover behind the green truck. As the shooting had started earlier than planned, the driver of the SUV (Thompson) disembarked in case his rifle fire would need to help out.

Following Zafar was another fighter (Matek). Upon seeing someone behind the truck, Matek rushed in and tried to get into a close quarters fight. Over eager to engage though he missed, doing nothing more than alerting Oldham to the attacker behind him. 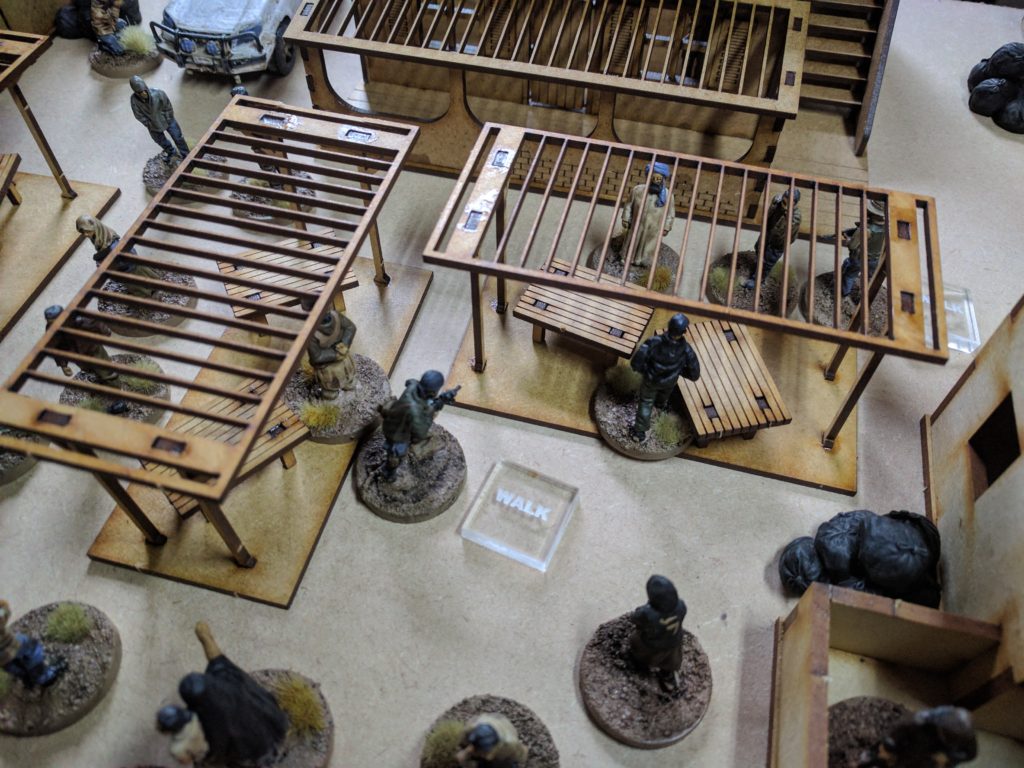 The last of the strike team (Sullivan) sprinted past the fight and also dove into the market, aiming to get into the target location quickly and get the job done. On the far side of the market, Jarah spotted Davison rushing through the crowd but was too slow bringing his rifle up to fire. 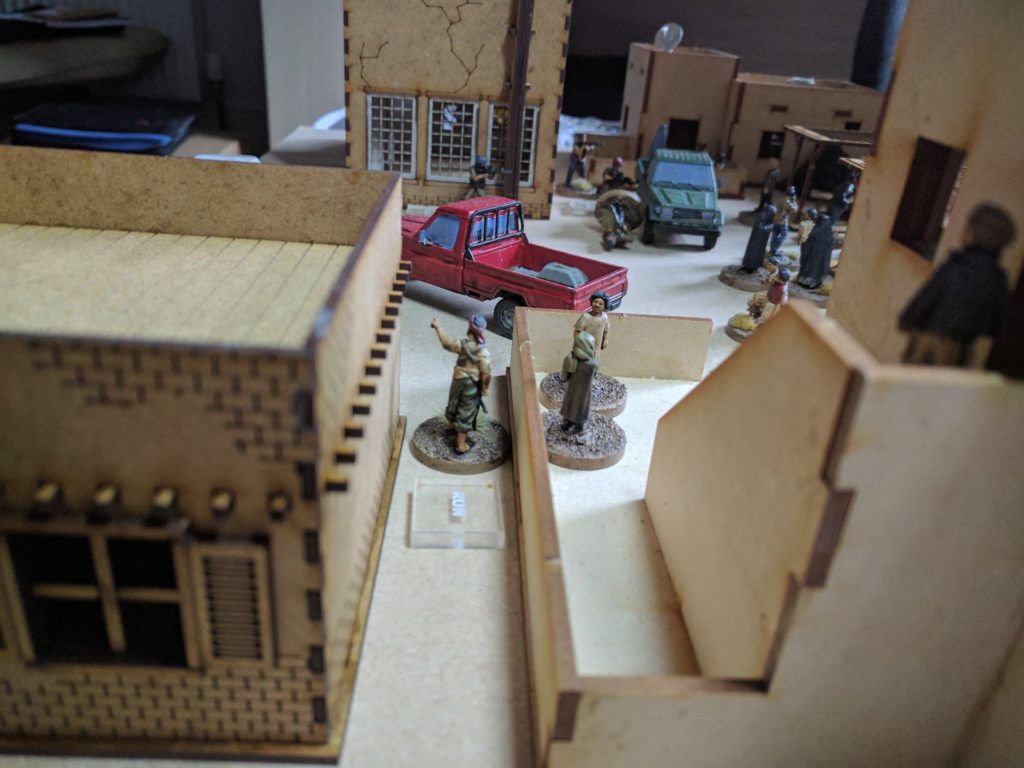 Namir, having heard the firing, entered the body of the market to look for the attackers. However, more importantly, Hamad (the militia LT) entered the fray from a good flanking position. He rushed to the corner and swiftly sighted in Thompson in cover behind the SUV.

Above in the warhouses’s office, Renault continued his work as scout and called in the appearance of Namir as a threat. Around the same time, another fighter entered the area and spotted the source of the machine gun fire. This allowed his buddy Kabil to pop up and unleash a hail of rounds at Wallace, though the building absorbed most of the burst. Inside the cafe, Abdul spotted the attackers and shouted out “The infidels are coming!”

In response to this, Al-Bashar dived for one of the backrooms in an attempt to trap the operators once they entered. Nearby, and showing their difference in command styles, Davison calmly exited the crowd and struck down Jarah with a quick burst.

Back at the warhouse, Wallace swiftly pulled himself together and resighted on the man who just shot at him. Finding the target, another burst of MG fire dropped Kabil, knocking him unconscious. Down below, Oldham turned to fight Matek. Unleashing an all out attack, Oldham dropped the rebel to the dirt. Also wishing to join a melee fight, Sullivan rushed through the crowd and up to Namir, attempting to knock him down rather than risking a shot through the civilians. Unfortunately he failed and locked into combat instead.

Namir however was having none of this. Pushing Sullivan back, he ran round the corner and dived back into cover. Ignoring this, Bowman soon reached the other side of the crowd getting close to breaching the door into the target zone. 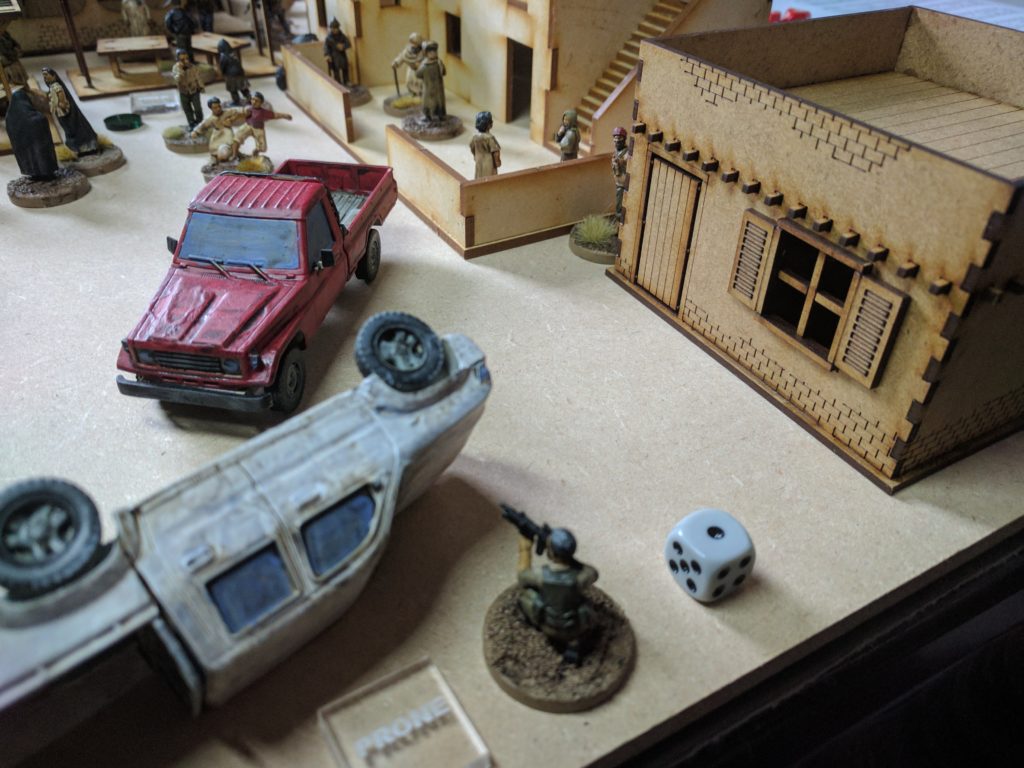 At this point, something went wrong for the Operators. Having worked out what was going on, Hamad prepped a frag grenade and rolled it under the escape vehicle. With a deafening bang the vehicle was flipped throwing Thompson to the deck. Miraculously he was unharmed (his body armour absorbing the blows) but it took a while to pull himself together.

Jibreel, having seen his buddies being cut down, ran for cover. However, he wasn’t fast enough as Renault drew a bead and slotted him. Inside the cafe, Abdul followed his boss’s example and hid, ready to surprise anyone entering.

As the number of militiamen around the target building dropped, Davison, Sullivan and Bowman setup and prepared to breach. Out of their arcs, Wallace dropped Namir with another burst of 5.56. Oldham, having heard the explosion of the SUV, dropped to a knee and send a round flying towards Hamad. The shot didn’t kill him, but Hamad went down hard. 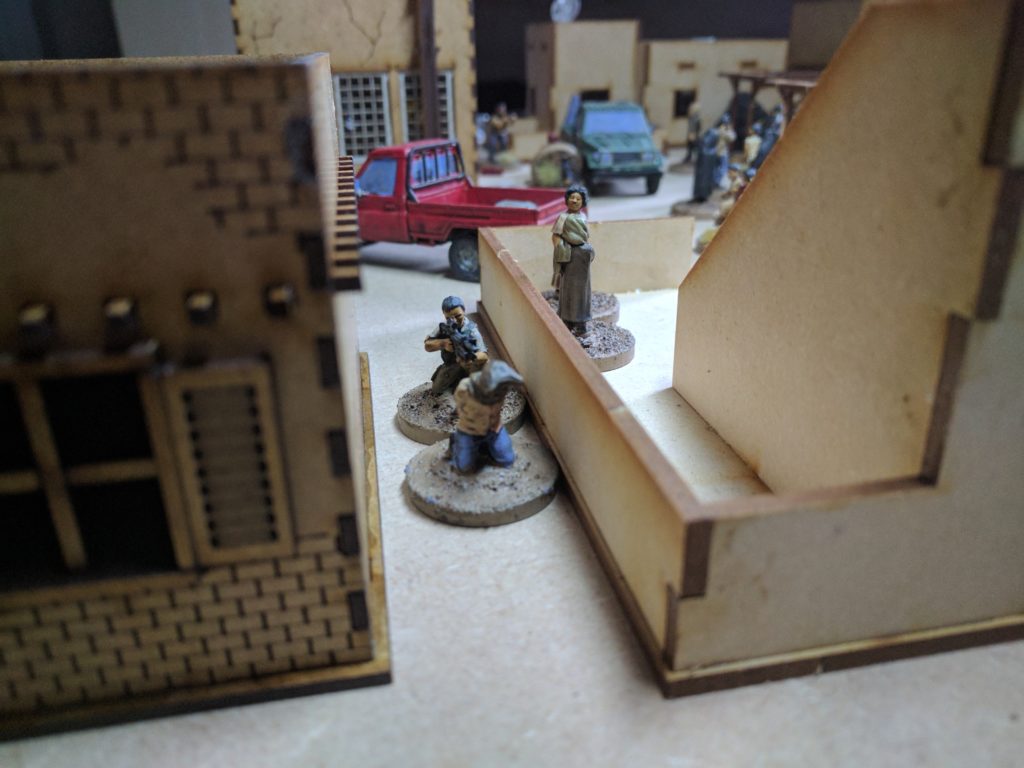 While the strike team got ready, Oldham started looking for working transports. Thompson, ears still ringing, worked his way over to Hamad and cuffed him before attempting to fix him up ready for transport. 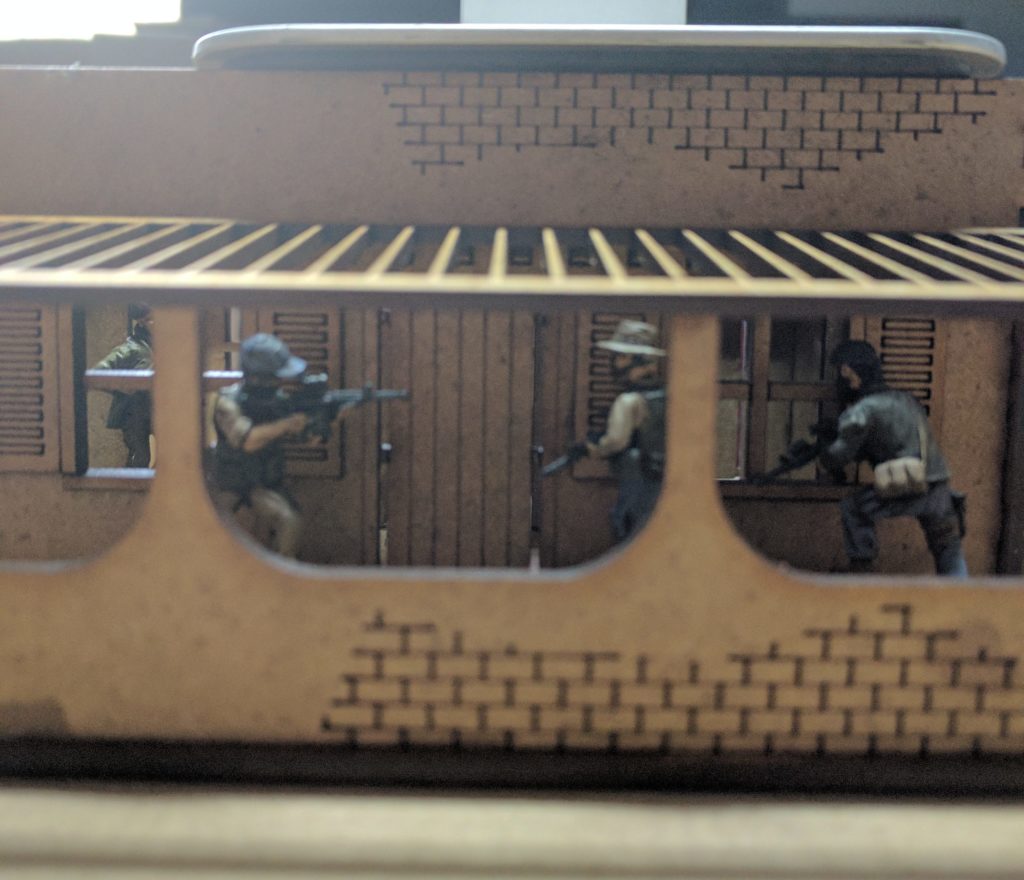 As time has passed, the crowd has started to scatter and the gunfire has quieted down. However, there was still one final action to do. With Renault and Wallace watching over, the three man strike team took the door. 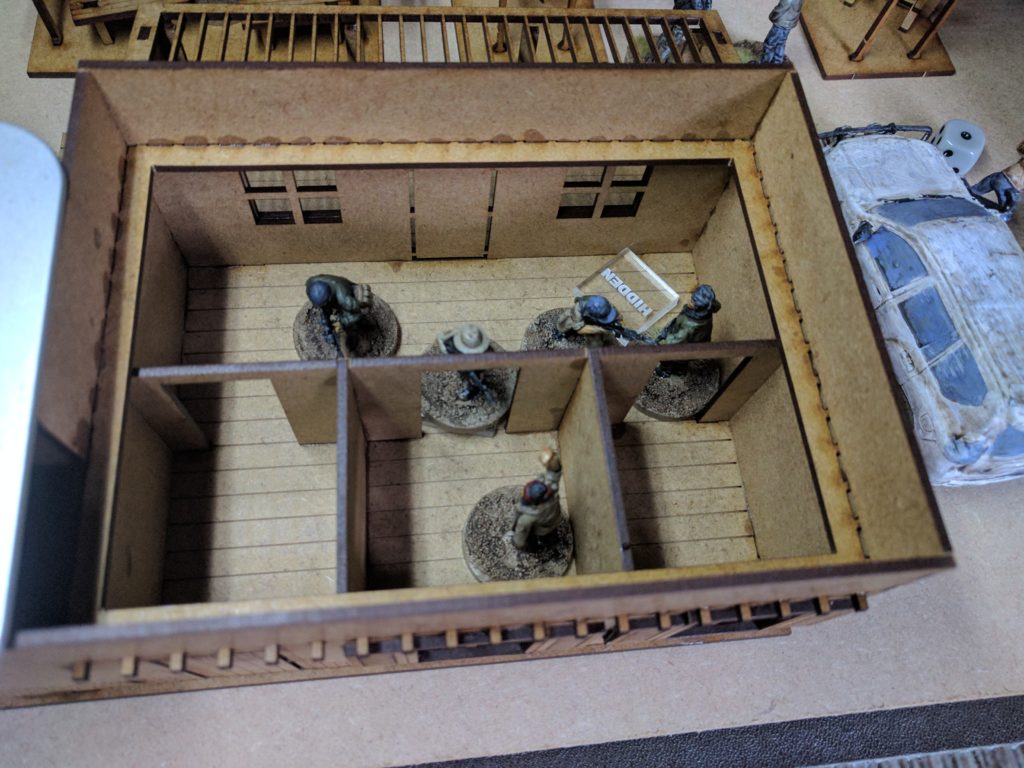 First, Bowman took two goes at it but then the frame shattered and dropped. Sullivan rolled a flash grenade into the cafe’s interior, forcing Abdul to throw his gun to the ground. Davison finally entered, avoid the frantic snap shot from Al-Bashar before throwing the militia commander to the deck and cuffing him. The firefight was over. 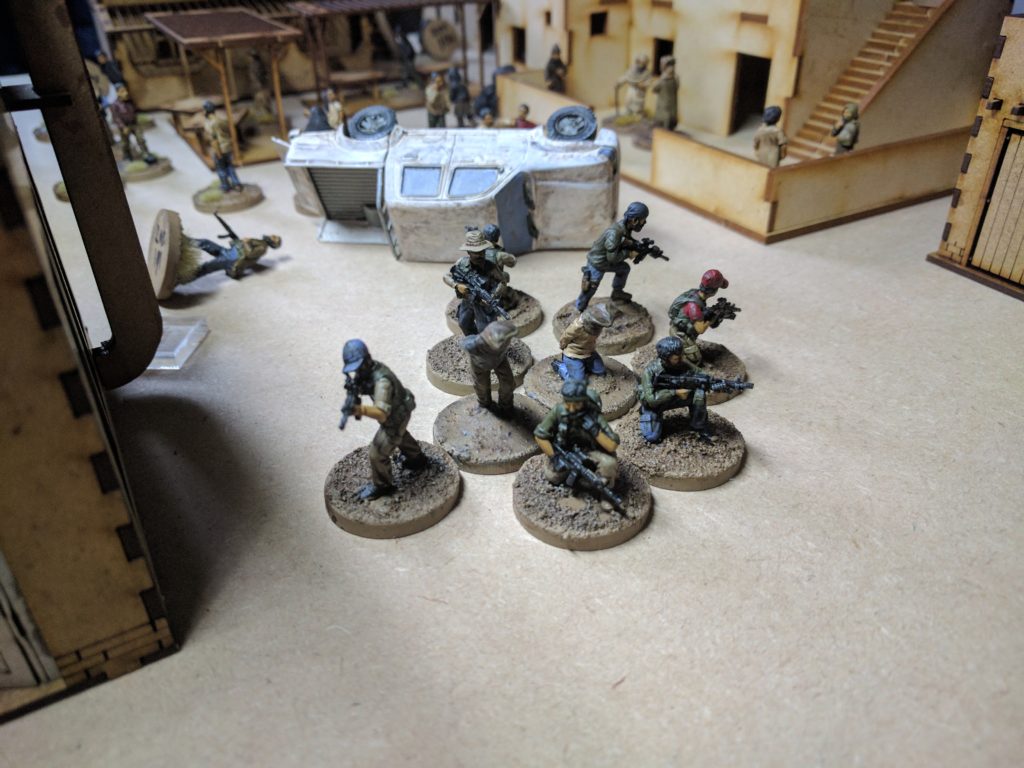 With both VIPs in bags and cuffs and no casualties amongst the contractors the mission was a success. However, the post game wrap up added some complications.

None of the vehicles on the board were in a fit state to run, forcing the team to extract on foot with two captives in two. Worse, both the militia and the local police force are now looking for a group of heavily armed contractors. To make it even worse, night is beginning to fall.

That was a fun game. Playing solo allows for a much more casual pace of play letting me record a step by step of the game which can be found here. I also got some good testing in.

The next game will require me to finish building some MDF terrain to act as the centerpiece but should be a better test of the stealth rules. However, I’ve now worked out the third game in the season which will have the team from this game trying to get through a dense urban area on foot. And next time, the teams will be slanted in the other direction.

The camera cuts away on Bazi City, following a road out towards the outskirts. An old factory, a relic of the Cold War Industrial rush, sits isolated with only a few buildings nearby. For the first time in a while, there are signs of activity.

The camera drops down to just outside of the factory onto four lumps of green in the dirt. As it focuses, the shape of four more members of CGS, all wearing ghille suits, become more apparent…