Thursday’s battle at the club took us back to Spectre Operations and once more deployed to Bazistan. Wanting to get more horde of technicals on the table, what better opponent than heavy metal itself, the Challenger 2.

2 days after NATO intervention in Bazistan.

US and British forces are currently pushing towards Bazi city, engaging both the rebel militias and elements of the Bazistan army and police who have changed allegiances.

As part of this advance, a British Challenger 2 named “Boar Fighter” has encountered mechanical issues and was separated from the main advance. A group of engineers (escorted by a US Army squad in Humvees) have managed to repair the tank and as a group are now advancing to catch up with the main force. Luckily, the Panther belonging to the engineers has managed to get some CAS in support.

Between the main force and the breakaway party is the village of Al-Kahal. Al-Kahal sits at the high points between two valleys, forcing vehicles along the road through it. Although Al-Kahal was cleared by US Army forces earlier in the day, the local militia has returned in their technicals and has additionally been reinforced by elements of the National Police of Bazistan. Having spotted the small convoy moving towards them, the fighters prepared to ambush the tank and destroy it.

As the convoy rumbles towards the town, the only sign of something amiss is the lack of locals outside. 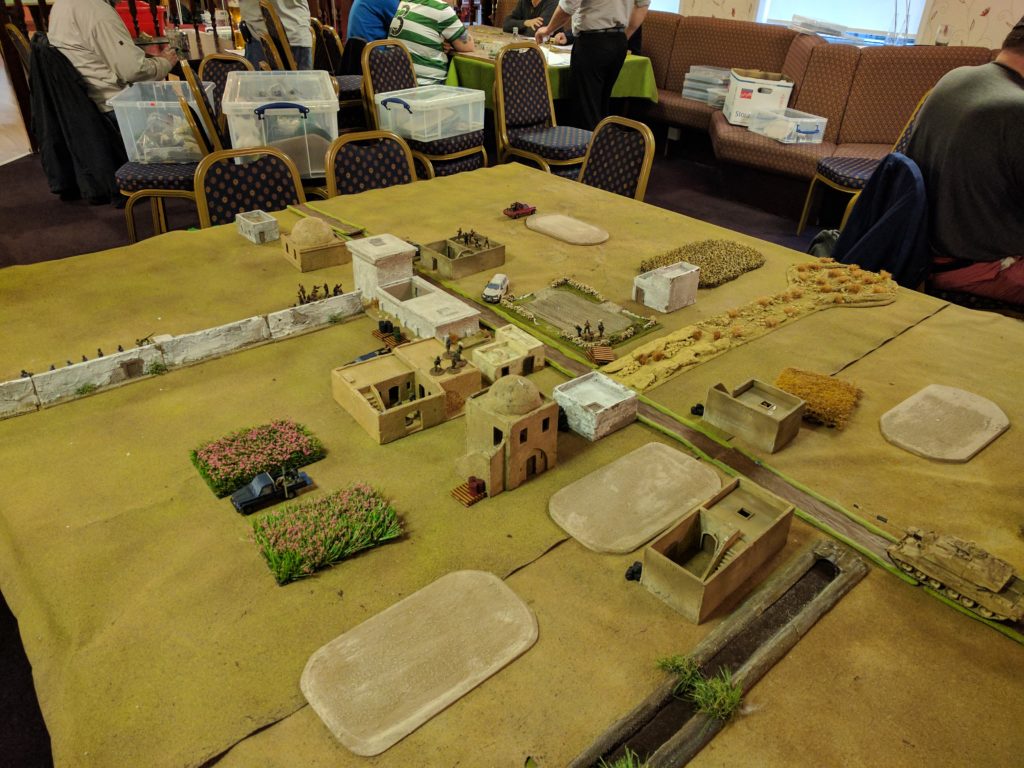 BLUFOR comprised of the tank, a fireteam of Brits in a Panther CLV and a squad of US Army Infantry spread across two up-armored Humvees. Against them, OPFOR had a mighty 5 technicals (including a heavy recoiless rifle and a TOW missile system), a squad of Eritrean mercs, a squad of National Police of Bazistan, a mob of militia and a team of tank hunters.
As the game began, BLUFOR rolled slowly onto the board while the militia held their fire, waiting for the tank to get closer. Eventually, the M40 totting technical decided to take out the second vehicle in the convoy (the Panther) with a quick pot shot. However, the round sailed past, doing nothing more than alerting the Brits that they were under attack. As the tank started to rush the town, the rest of the OPFOR started to open up, doing nothing more than suppressing the crew in the tank. 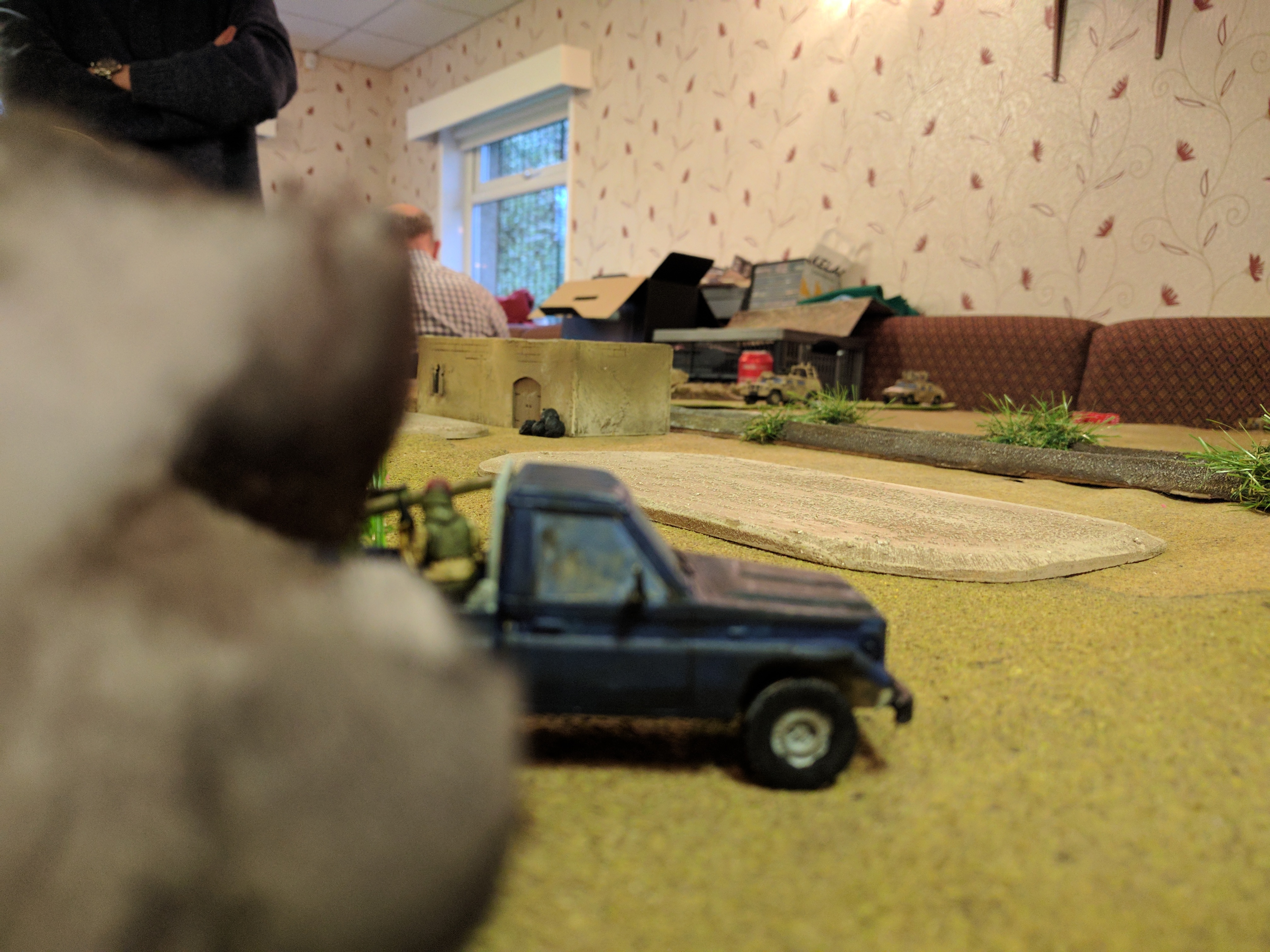 However, in the next turn the tank recovered, rolled forward and rotated it’s gun towards the unfortunate technical that fired the first shot. The rest of the convoy moved up as well. The Panther got into position to deploy it’s troops. 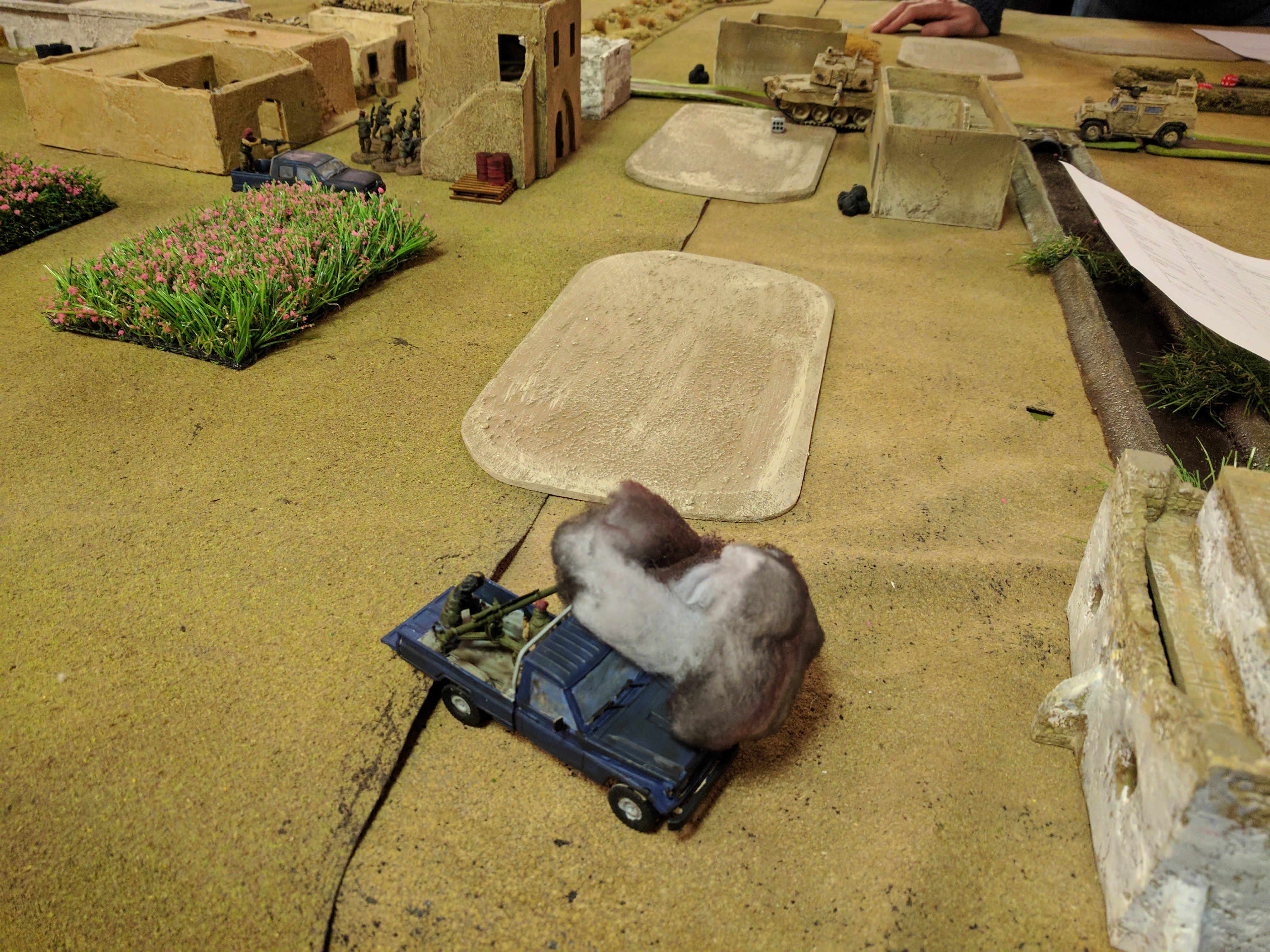 Shooting began with the Challenger 2 hammering a HESH round into the technical and achieving a mobility kill, making all but one crewman into a casualty. The two Humvees then joined in, raining .50cal rounds into the pickup and causing it to finally explode. In response, the militia opened up with a second round of “fire everything” which did nothing more than add more suppression. 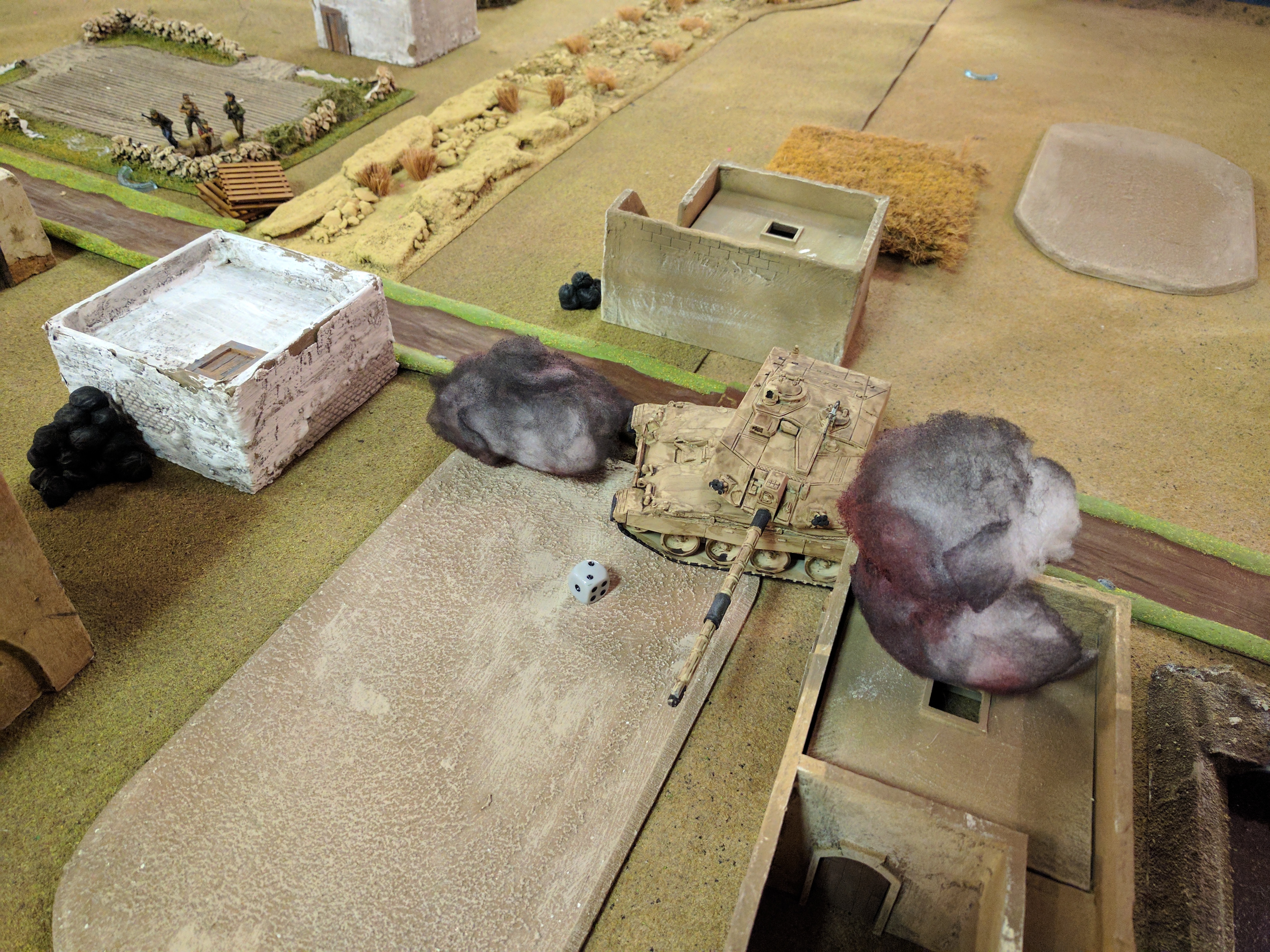 BLUFOR decided to turn off the road and head through the back streets, the Humvees keeping close behind the tank. The Challenger rumbled down the road, halting with its gun barrel poking round the corner. This obviously scared the pants off the driver and he started backing up. 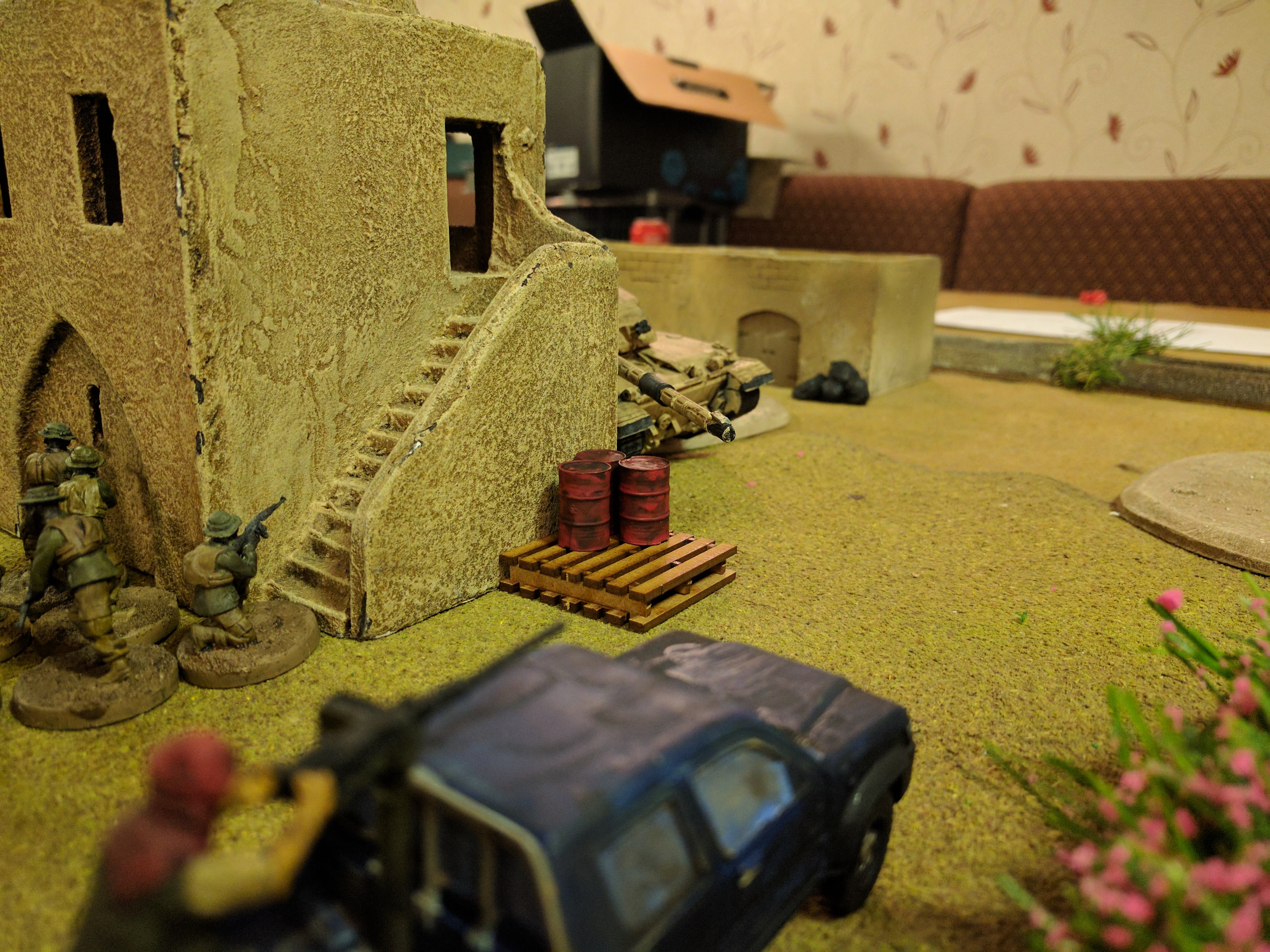 Close by however, the Eritreans prepared to take out the more vulnerable Humvees with a hail of fire. Across the road, the fireteam of tank hunters also crept forward trying to get in a good position to knock out the rear of the convoy. 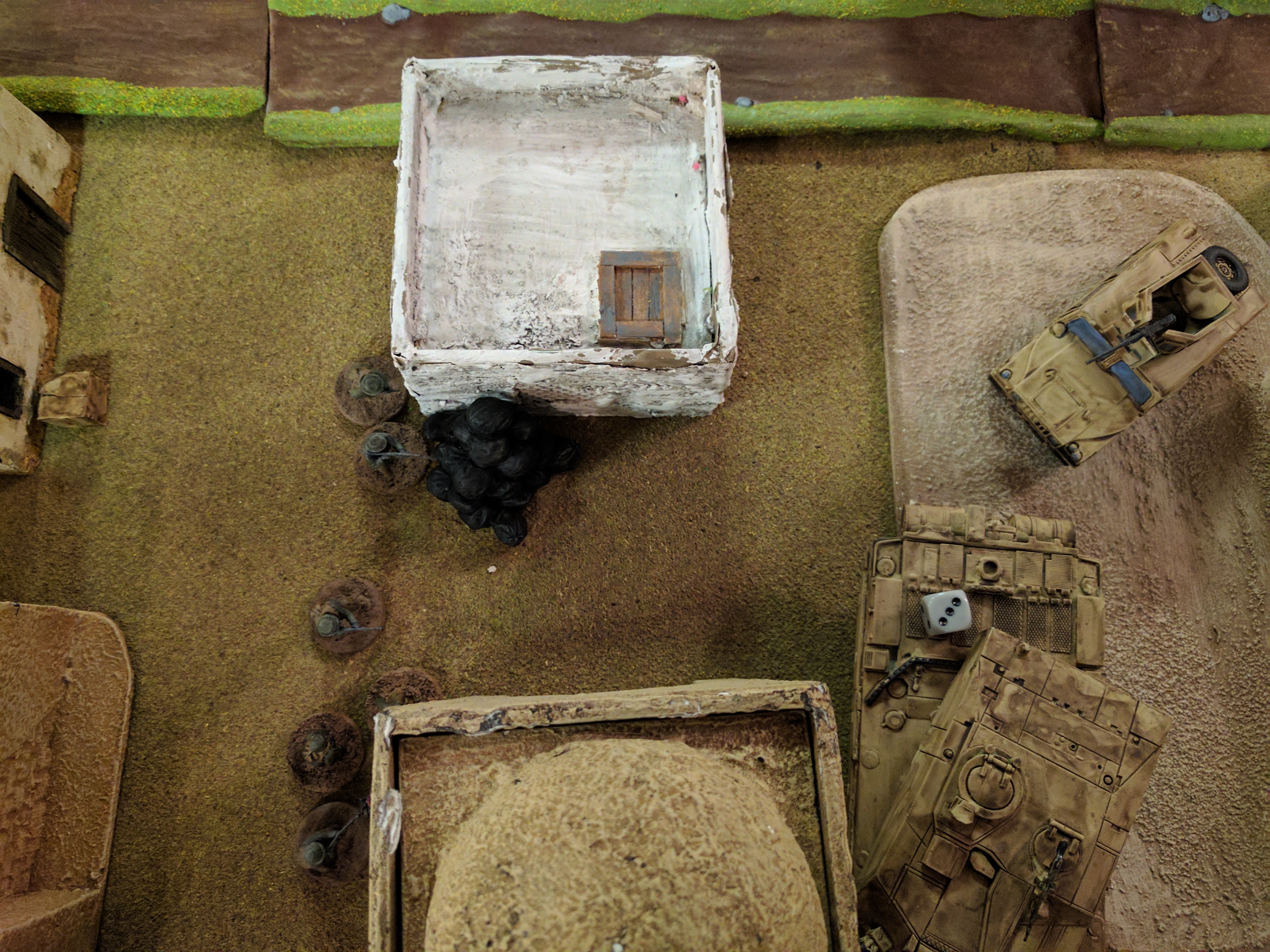 However, the Brits were too quick and spotted the attackers entering the wadi. Pouring on the fire, both the RPG gunners went down dead. In the side street, the American gunner spotted movement and hammered .50cal rounds into the gap. The four shots downed the RPG gunner and suppressesed the next threat. The Eritreans responded with a volley of shots that suppressesed the humvee but caused no damage. 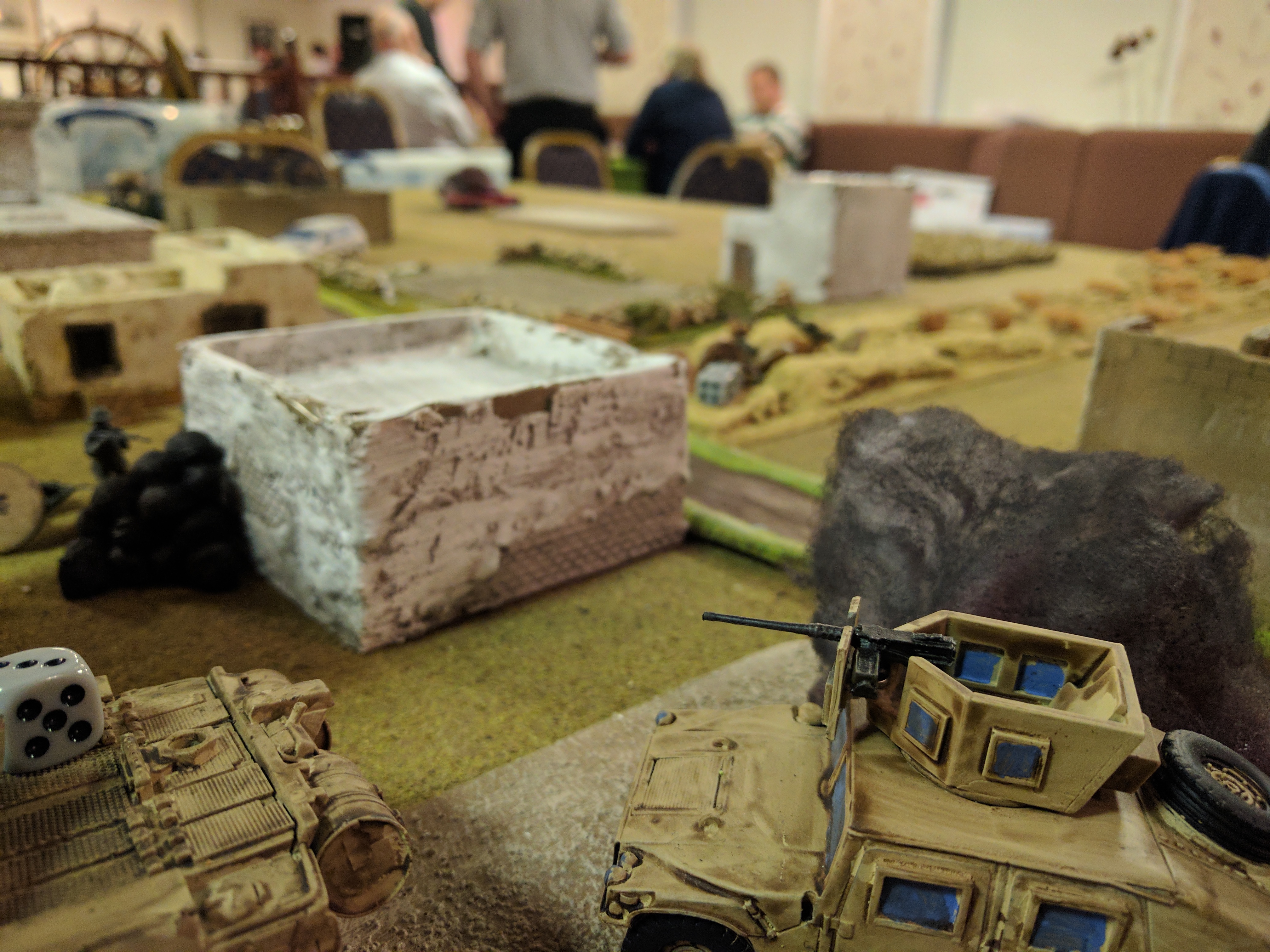 The movement of the tank hunters also opened up a gap for the TOW to put a shot in. With a *foosh* the missile flew across the fields and slammed into the ground just next to the lead humvee (it hit and caused some mobility damage). The lead vehicle was now going to slow the convoy down. 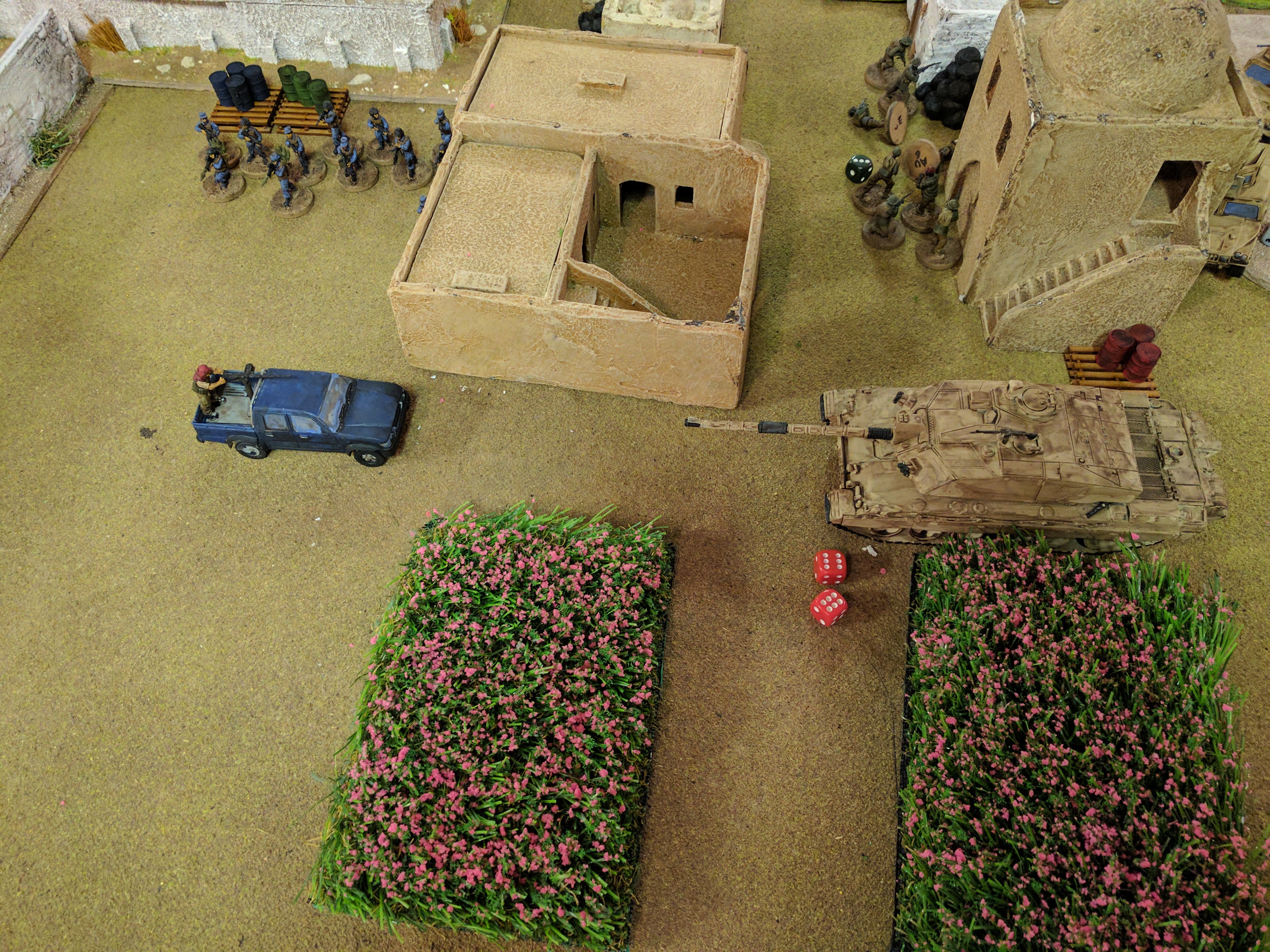 Their job done, the Brits remounted and sped past the Humvees. The tank continued to rumble round the corner, it’s prey once again frantically reversing. However, it was all for naught. 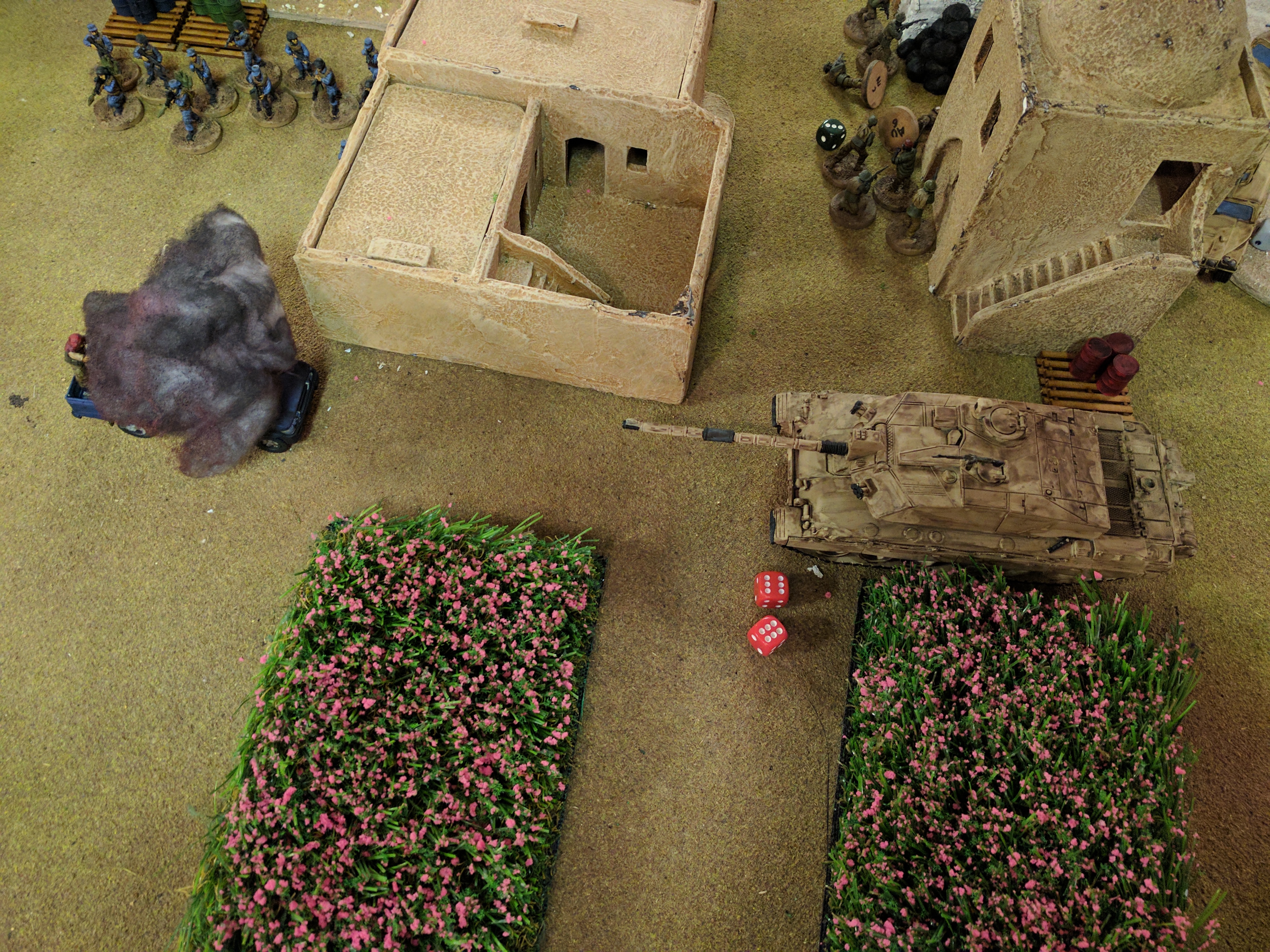 Seeing the demise of their technicals, the National Police started moving, keeping it’s RPG gunners in position to tank hunters while the rest moved out of sight. The rest of the force started to prepare defenses against BLUFOR trying to ram through the wall and then run off the board 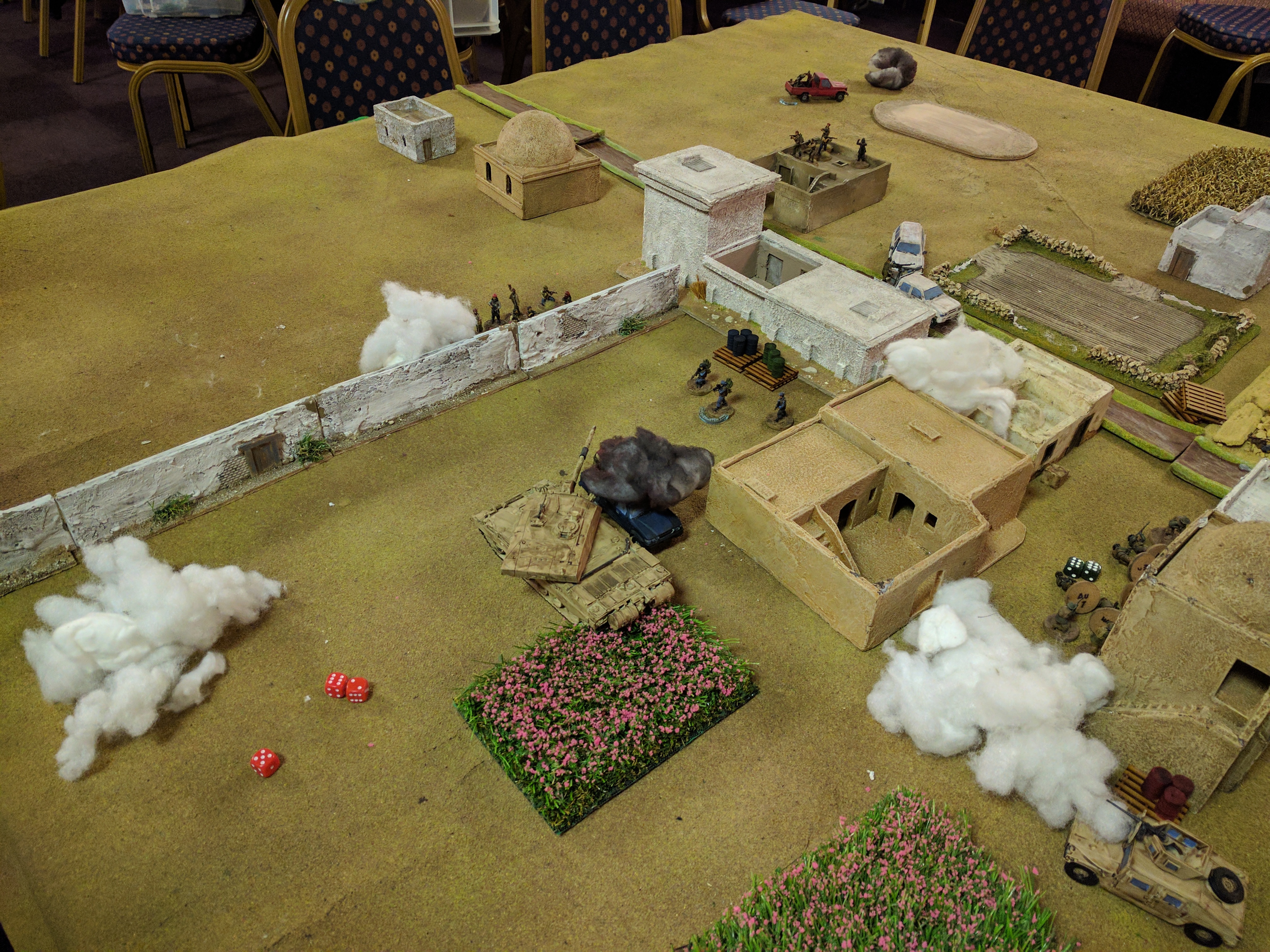 In a calculated move, the Challenger 2 started to accelerate towards the wall. Behind it, the Panther got into position and hammered the flank of the pinned Eritreans, keeping them of action. The Humvees limped forward. Bigger news was what the Challenger 2 did next. Knowing about the TOW that would be shooting at it once it cleared the wall, it set off its smoke launchers. The smoke dropped all around, with one grenade landing on the police unit causing a casualty while another hit the militia and caused two more men to go down. The Challenger was also overwatched by one of the police but it shrugged off the round and them wiped out the shooter with the co-ax. 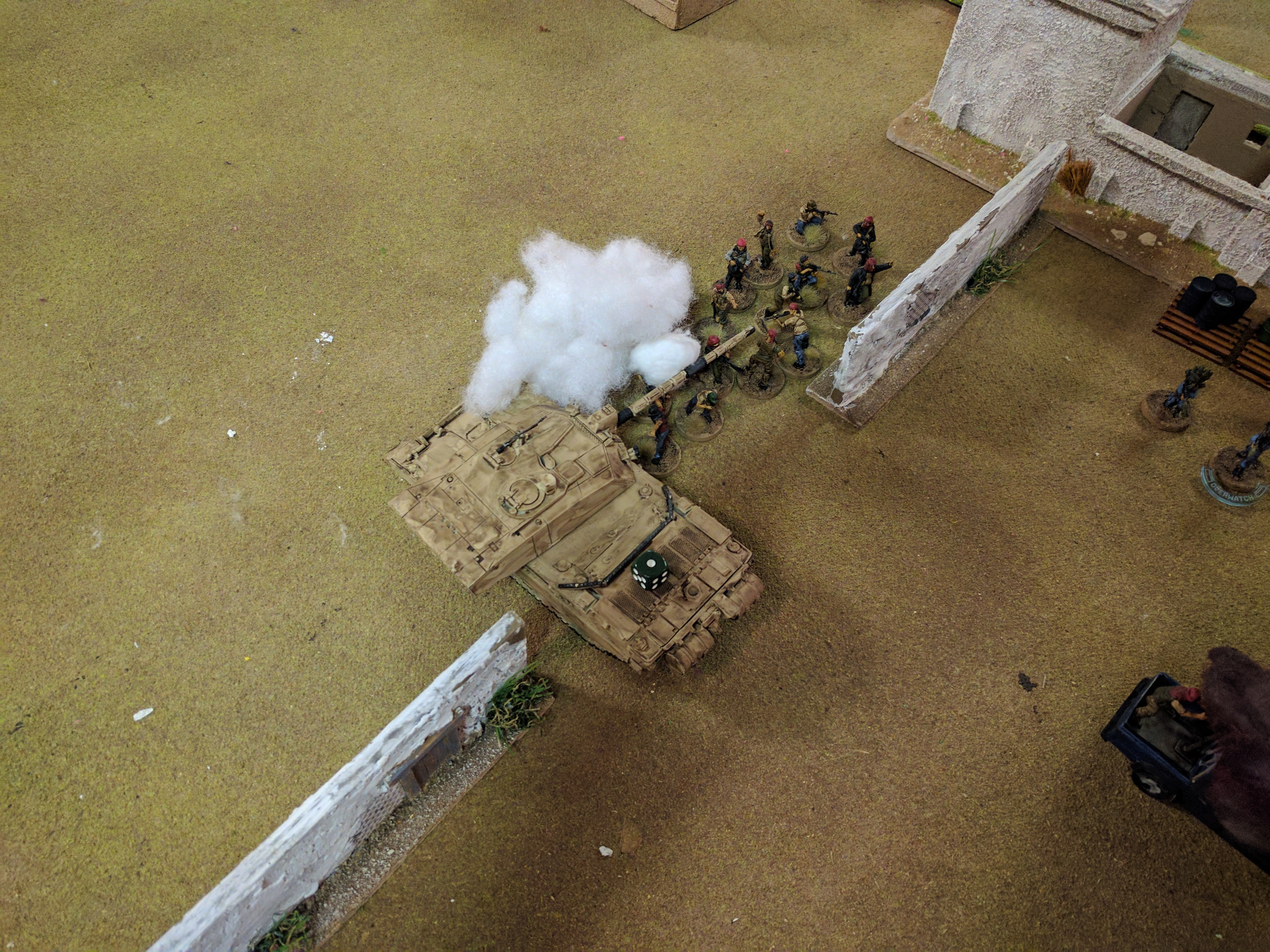 At this point, most of the militia was combat ineffective through suppression or location. However the Challenger rumbled on, smashing into the wall and breaching it. The AT gunners sat on overwatch all fired but the rounds just bounced off the Chobam armour. The rest of the convoy followed up the tank and headed for the breach. 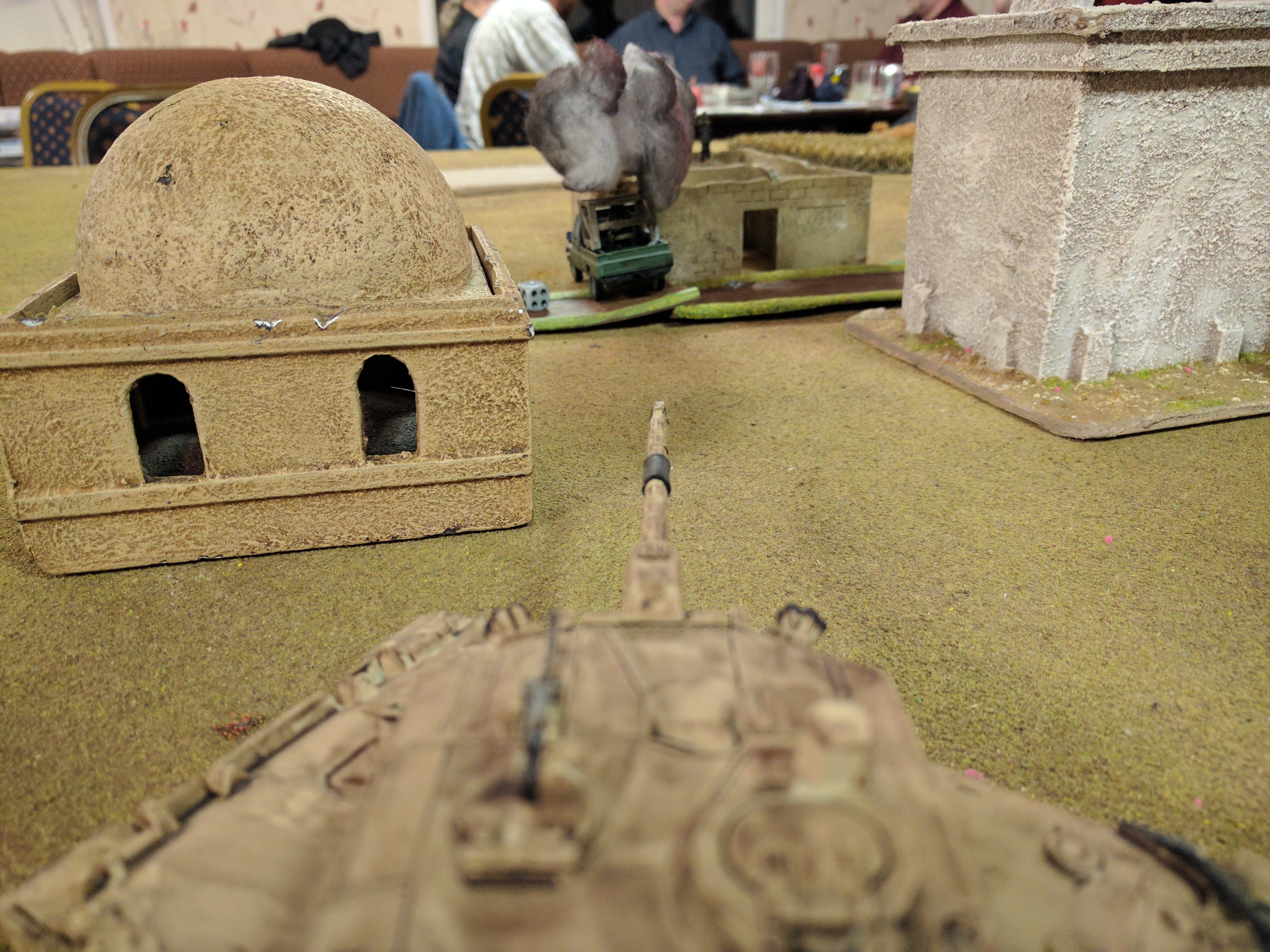 Time was rapidly running out but the BLUFOR player has one last task. Swinging the turret, the Challenger lined up its 120mm gun on the fake tank and blew it sky high.

By now the bar staff were slowly turn the lights off and so we called it. BLUFOR has managed to push through the village with only minimal damage. However, with another turn one of the .50cal technicals might have caught the Humvees in the rear and caused some damage. But that’s just mights and the BLUFOR had managed to break through. Looks like the militia commander will be in trouble with the Shiekh 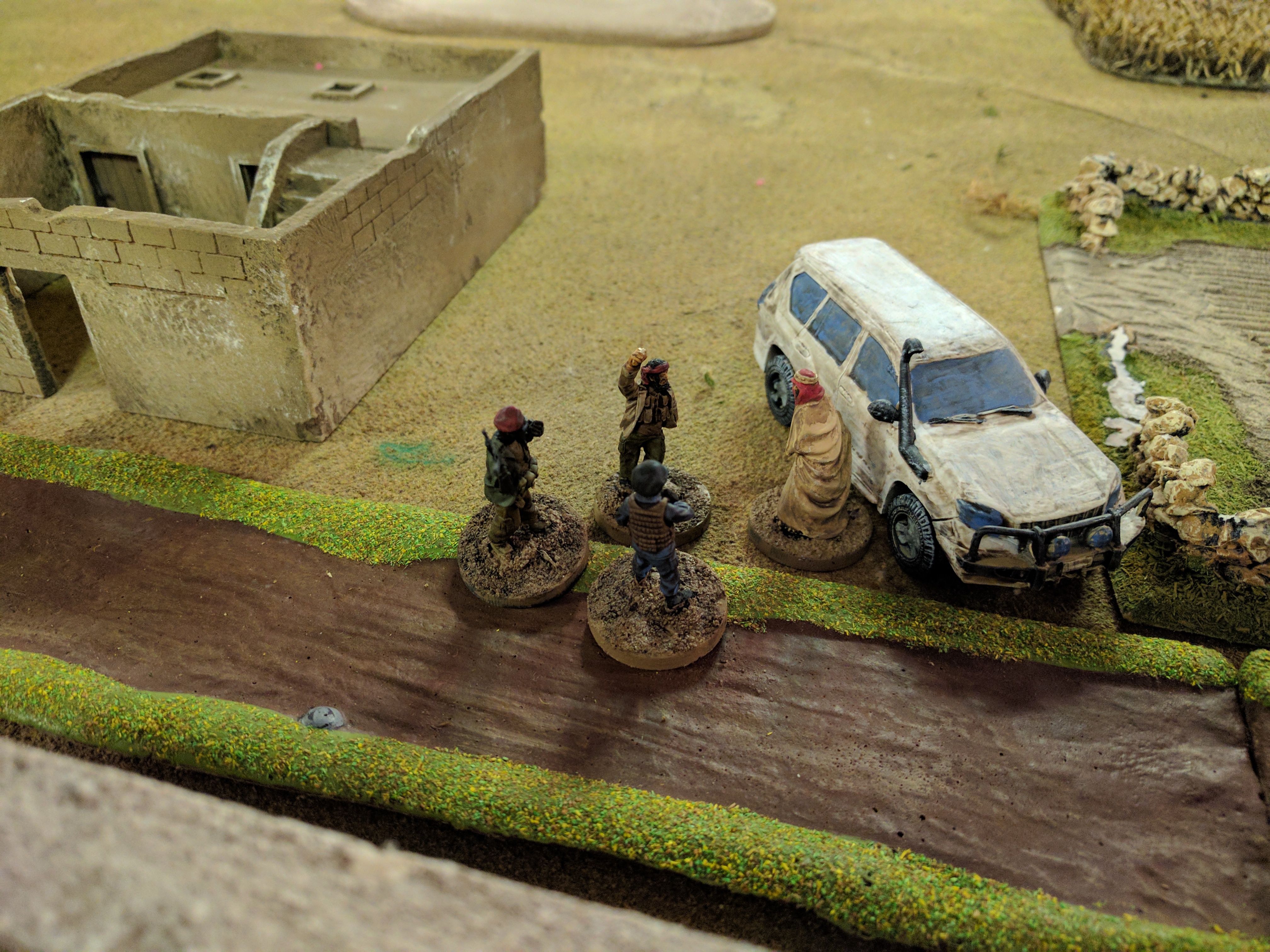 Overall, it was a rather fun time. I think Spectre’s rules are great and the vehicle stuff work best at the lighter end of the spectrum of vehicles. The combination of “to hit” and “to penetrate” speeds up the game but can lead to some bizarre situations. The tank hunter rule changes help  it the fact lethality plays no part seems incorrect.

More the fault of us, we completely forgot about the off map options we had. BLUFOR were hampered by their ROE but i should have been dropping mortar fire like it was going out of fashion.

On the other hand, we threw a large number of figures and vehicles at the board and both teams has fun – that’s what matters at the end of the day. I was also really happy with how the technicals look on the table – there were quite a few positive comments made about them (including my favourite the “fake tank”).

Not sure the next time we will be playing Spectre, but I’m looking forward to it!