In case you missed the barrage of references to it on this blog, Facebook, Twitter etc, I spent this weekend down in old London Town to attend Salute, the UK’s biggest wargames show. I first attended when I was still in Brighton (back in 2015) and so it was a day trip (assuming the trains were working). However, I was prevented from going in 2016 as the show was on the same weekend I moved into my flat in Edinburgh. On the plus side this did massively reduce my purchases but I missed out on all the fun times meeting other wargamers.

This meant that this year I was desperate to go. Although I rarely play demo or participation games, going to gaming shows give you a big chunk of energy to get yourself back in the fun and ready for more painting/gaming.

But before the show, I grabbed a beer or two at the Fox right next to the excel centre with some of the guys from the Spectre Operations group on Facebook. It was great to meet a group of people so enthusiastic about the game. I had a good few chats, including some cool things people are working on. I also ended up talking with Viv from Knights of Dice (a great guy to chat to), Dougie of Dougie’s Wargaming Blog fame (something I’d been reading for a while before I even started collecting myself) and a group from Mana Press who were up from Down Under to demo Tribal. One common theme of all weekend – everyone I talked to was just super nice and a pleasure to chat to. Ended up discussing some cool things and really excited about what’s coming up in the wargames world.

A quick stagger back from the pub, a night of sleep and I was all good for the following day.

If you’ve never been to Salute it’s certainly an experience. A whole hall of the Excel centre is filled with stalls and tables, each one offering something new to look at or a possible money sink waiting to happen.

After going to pick up my purchases (more on them later), I got to take a stroll around the place and look at all the various stuff for sale or on show. I’ve got some pictures below showing the stuff that caught my eye. 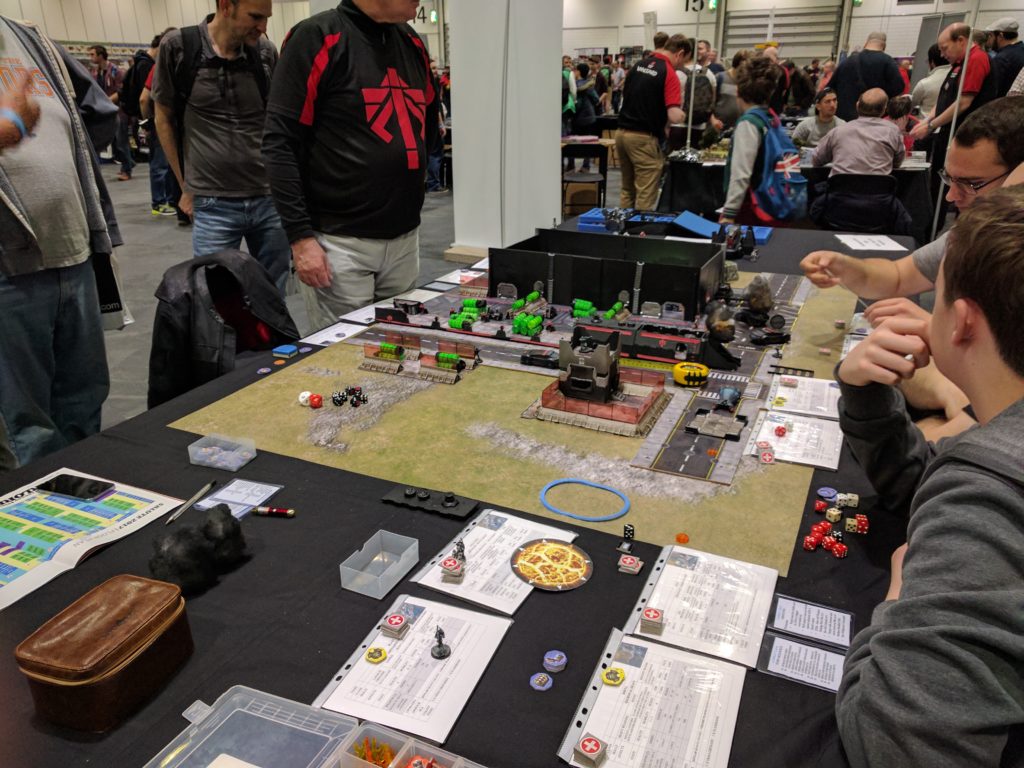 XCOM 2 inspired board. Not sure what they were playing but it was exciting to watch nonetheless. 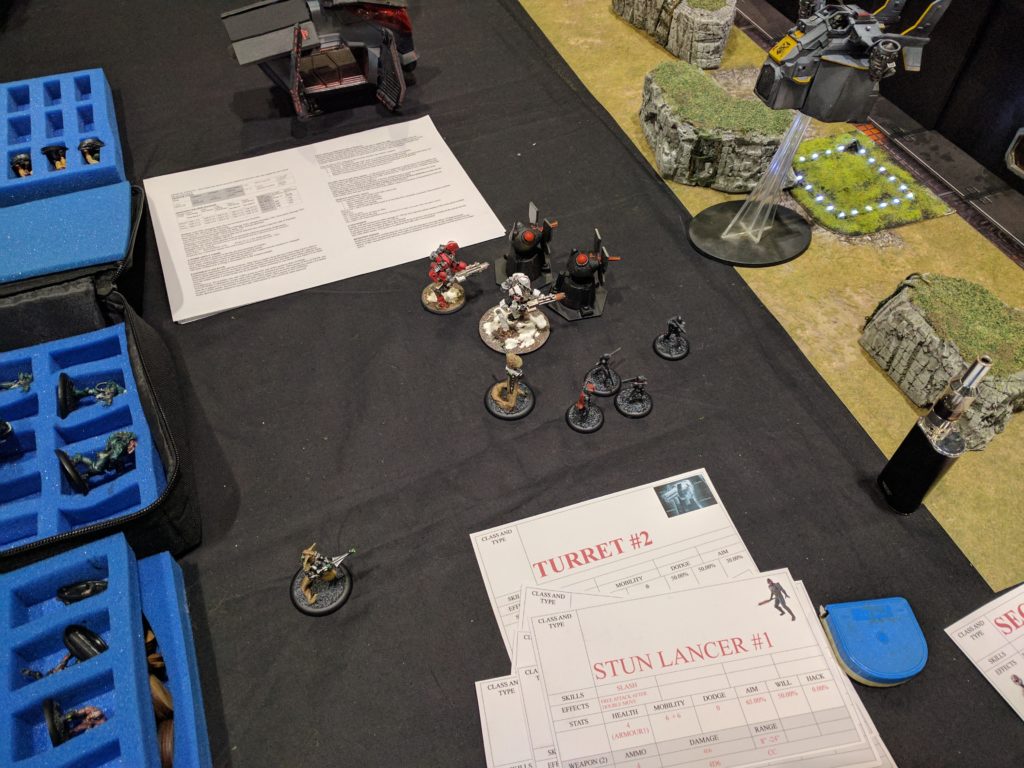 A bit of a closer look, showing off some of the converted figures used. 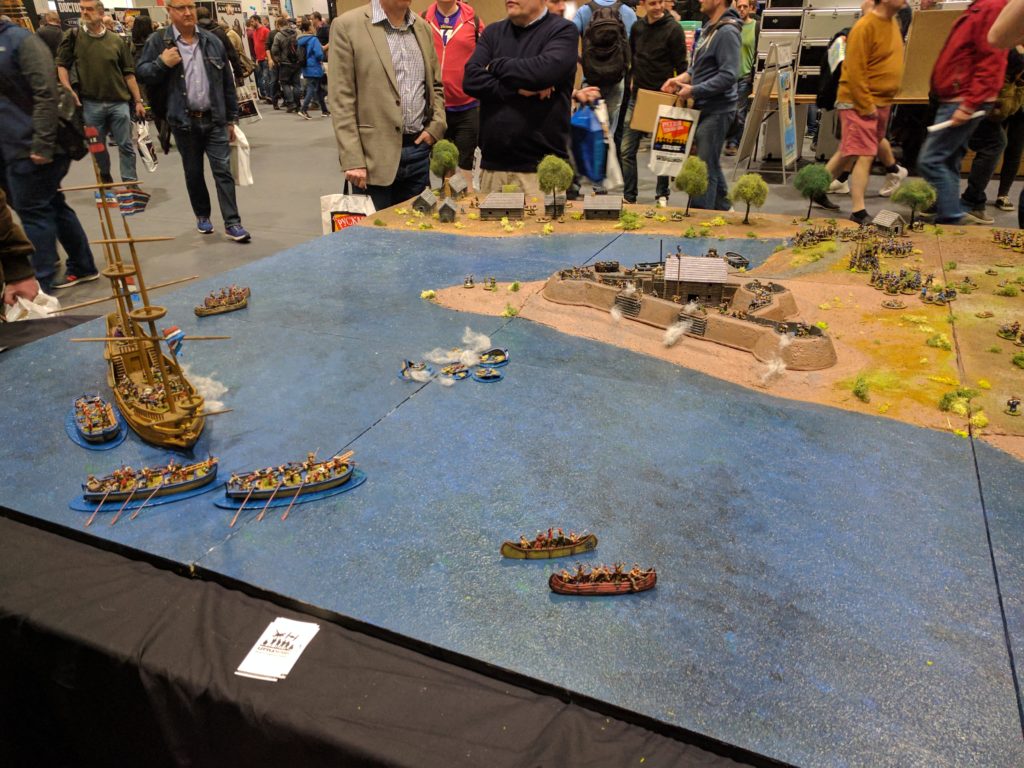 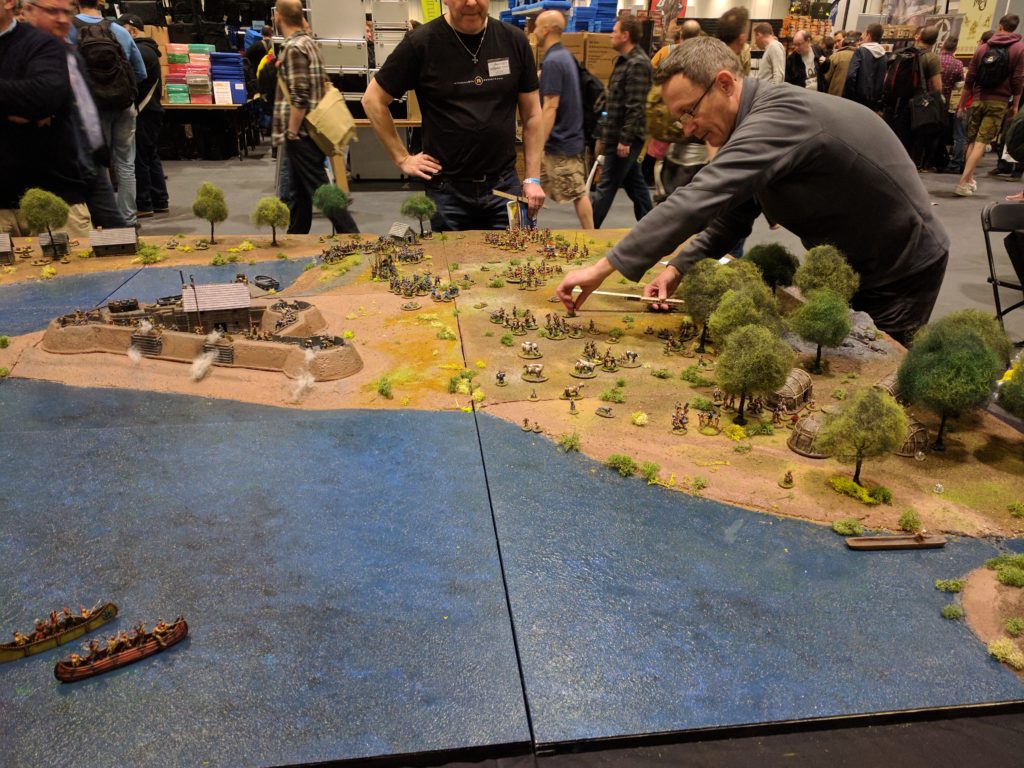 Dalauppror’s excellent looking Fort Mosquito game to demo Pikeman’s Lament. You can find more details on his blog but it was a lovely looking setup. 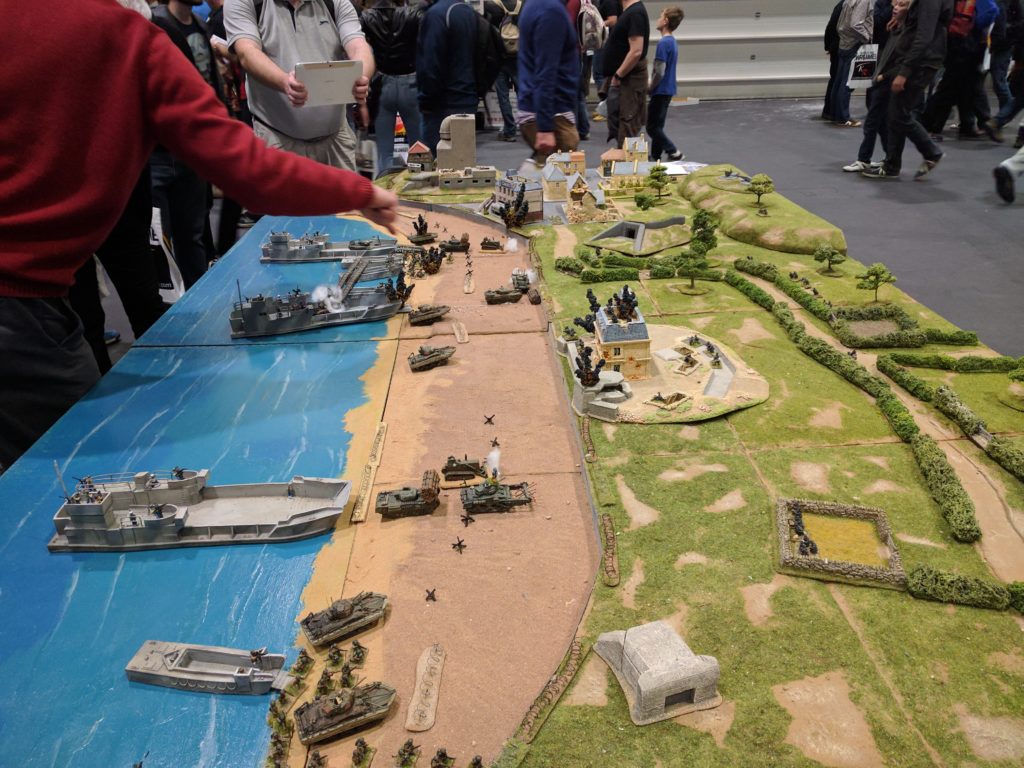 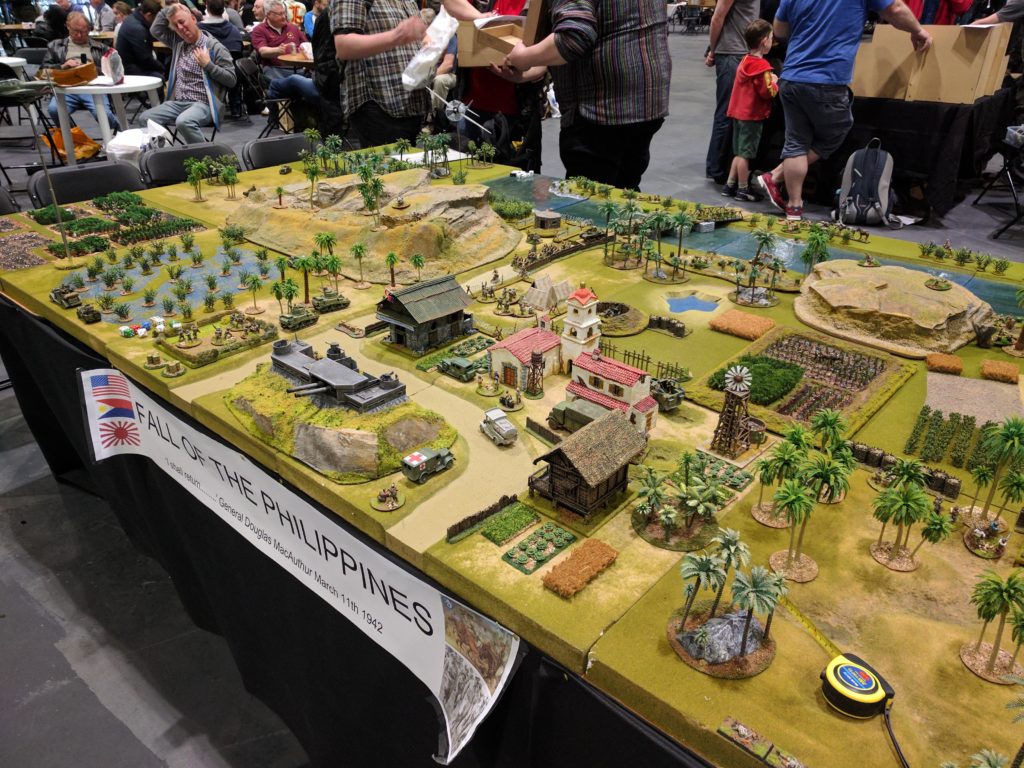 More WW2, but this time in the Philippines. Eye was drawn by the coastal guns in the foreground, stayed for the cavalry fighting the japanese. 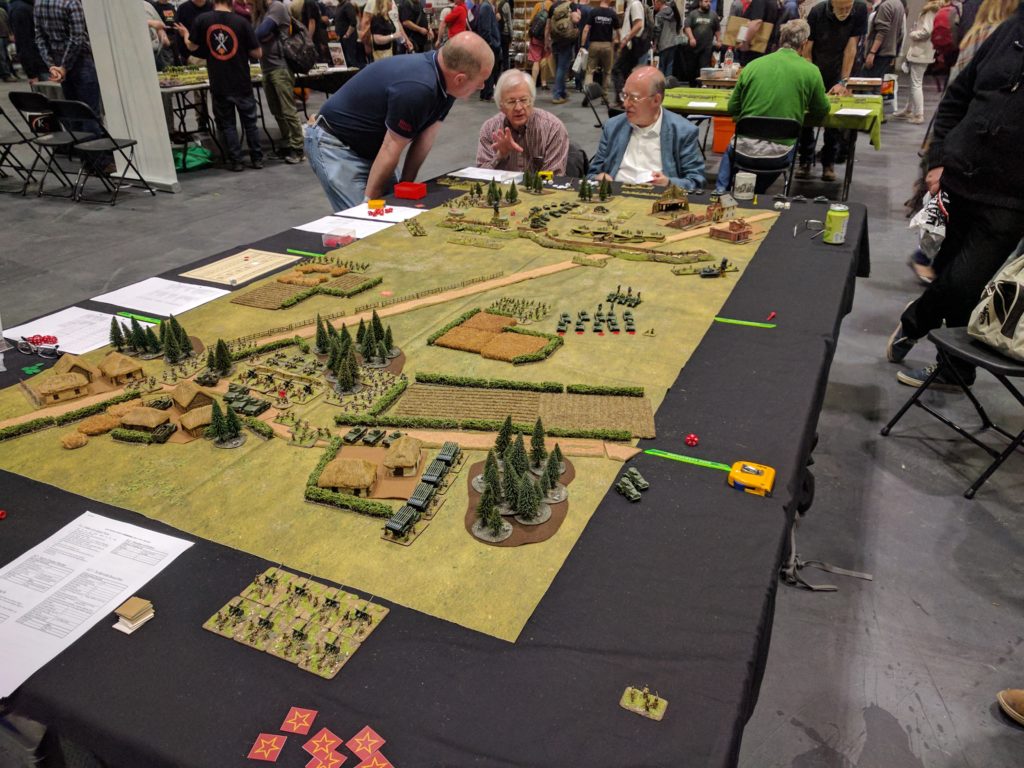 More WW2, but this time a smaller scale. 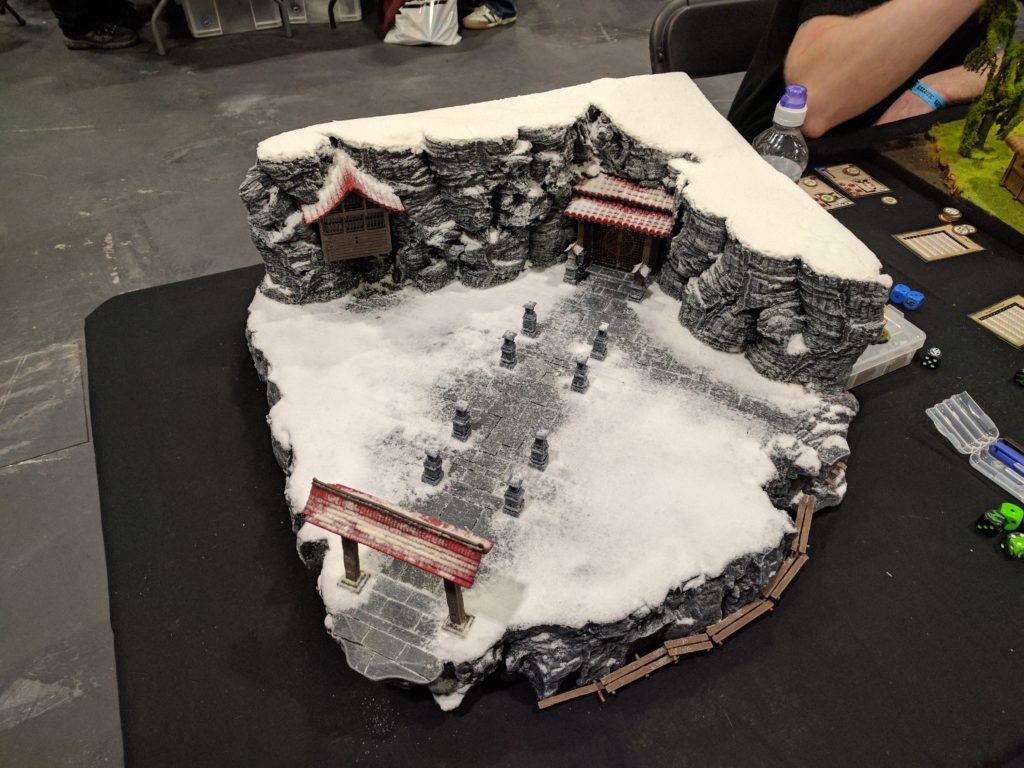 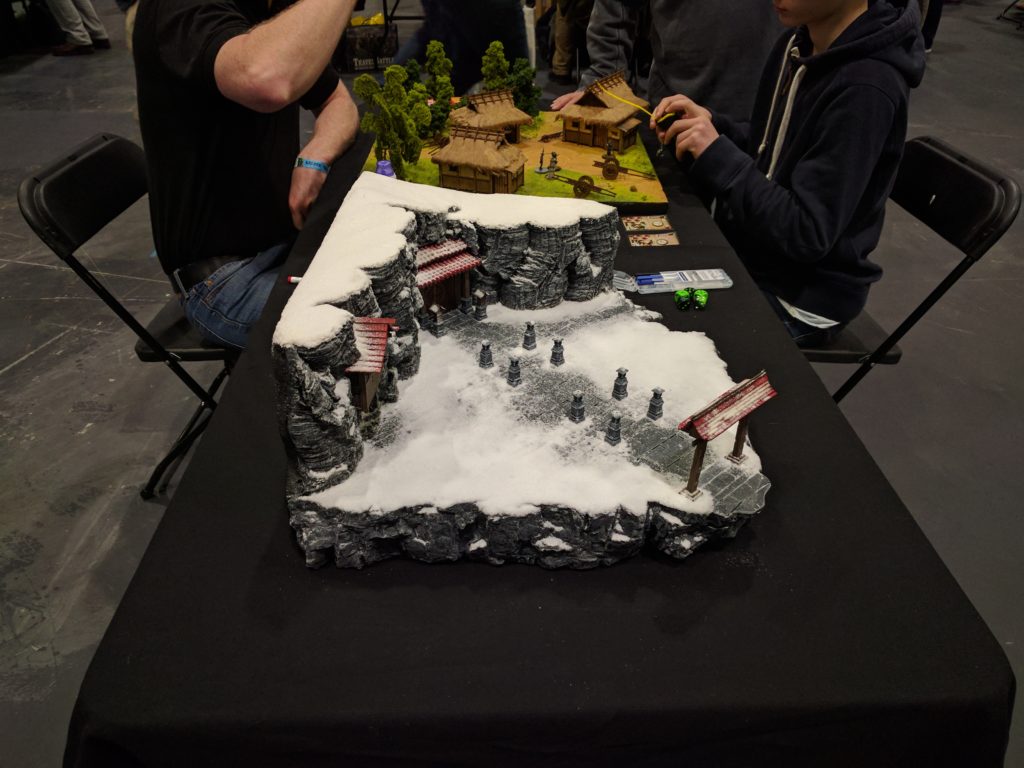 I literally stopped mid stride to look at this. There was samurai skirmish game on the other table but that winter scene was amazing! Almost too good to play on. 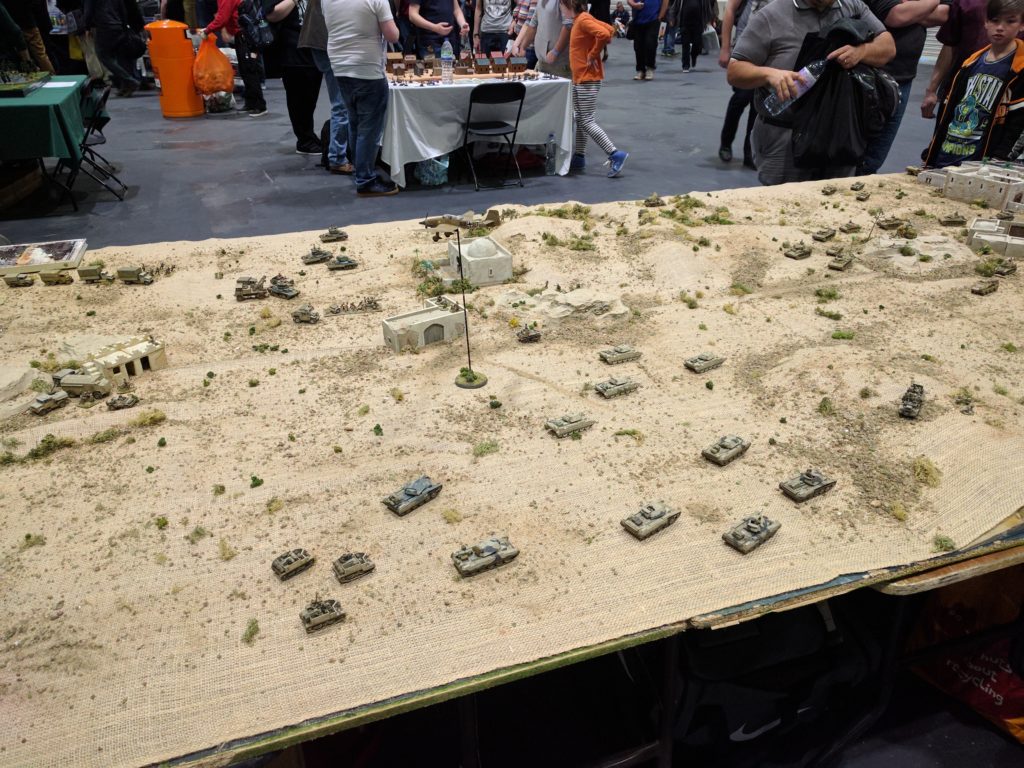 Ironfist Publishing’s Battlegroup Tobruk game. Always seemed to be busy when I walked past. 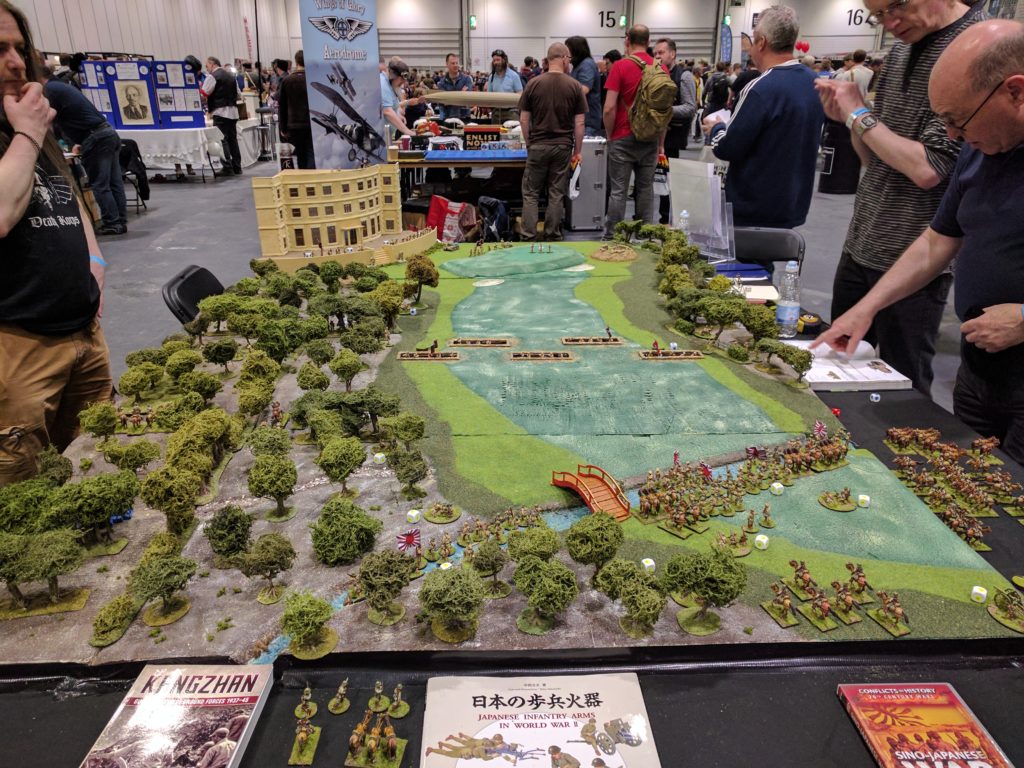 Even more WW2, Japanese fighting Chinese with a manor house in background. 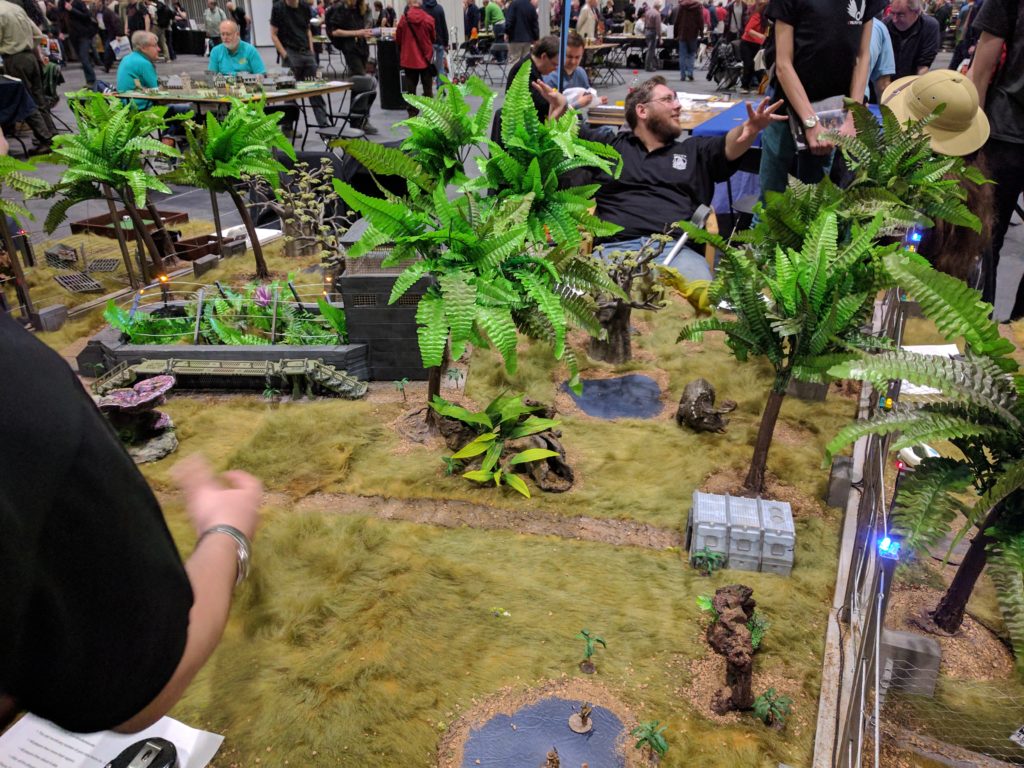 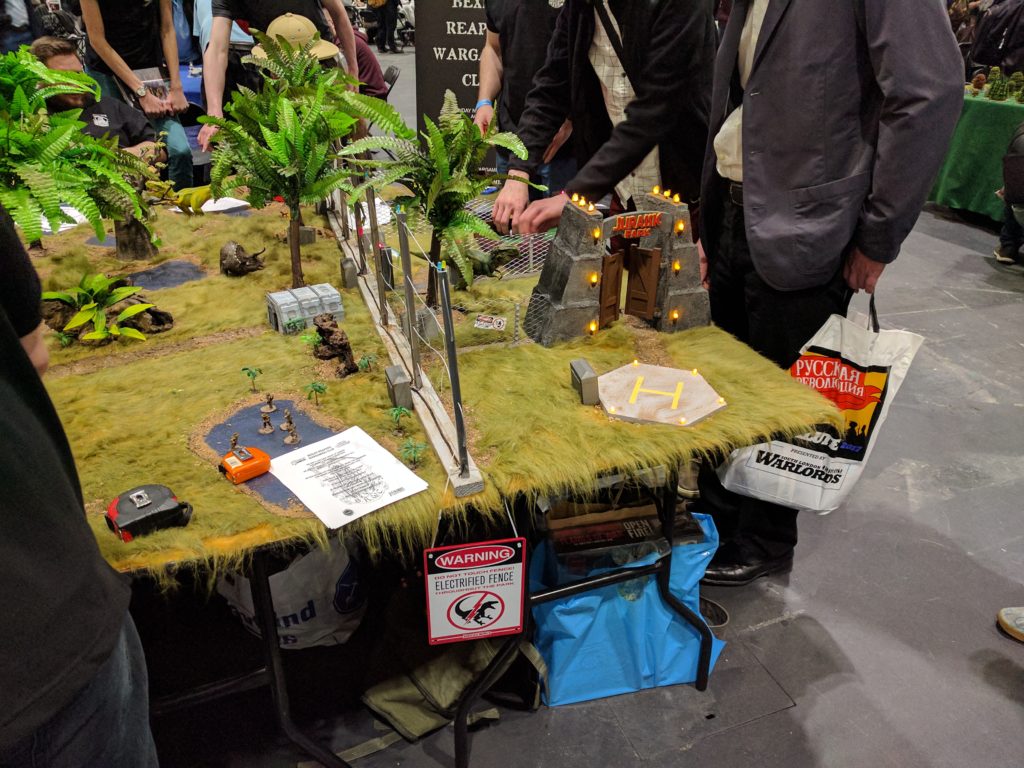 Another case where I had no idea what they were playing but that’s Jurassic Park. As always, any game with dinosaurs gets bonus points! 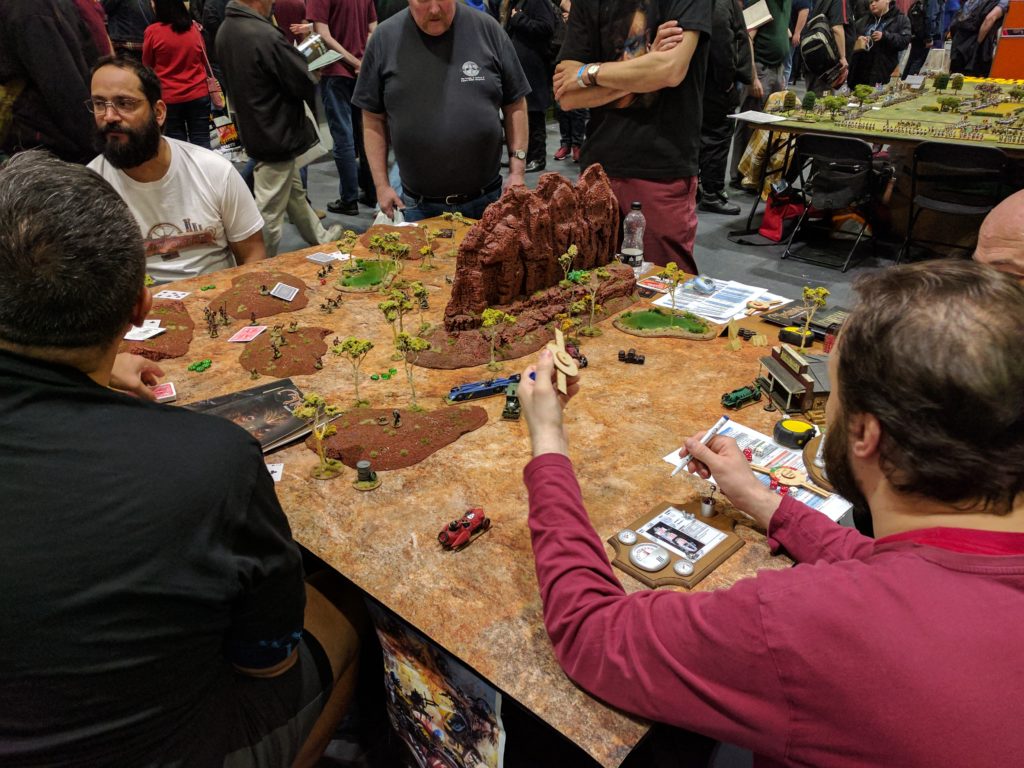 The demo game being run by the Mana Press was a really interesting setup. As the demo team was coming over from down under, they cleverly combined both their games (Tribal and Maximillion) into one standard board, separated by a ridge in the centre. Both games looked great. 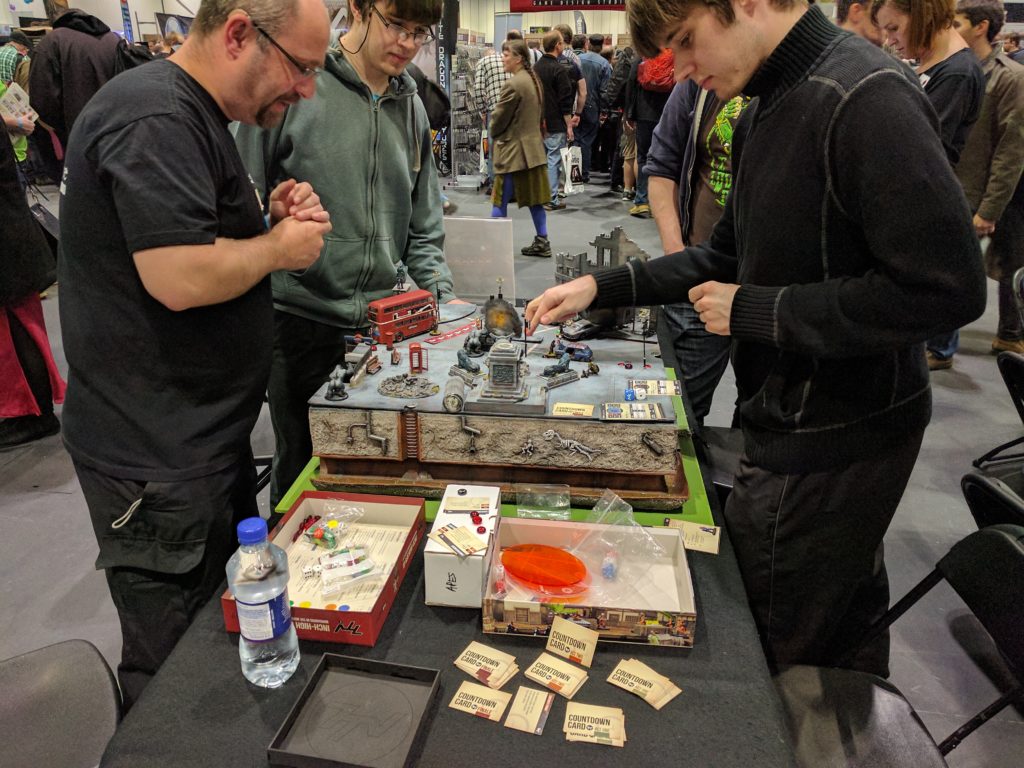 As always, 7TV provide the craziest games. This board had a giant ape roaming through London. 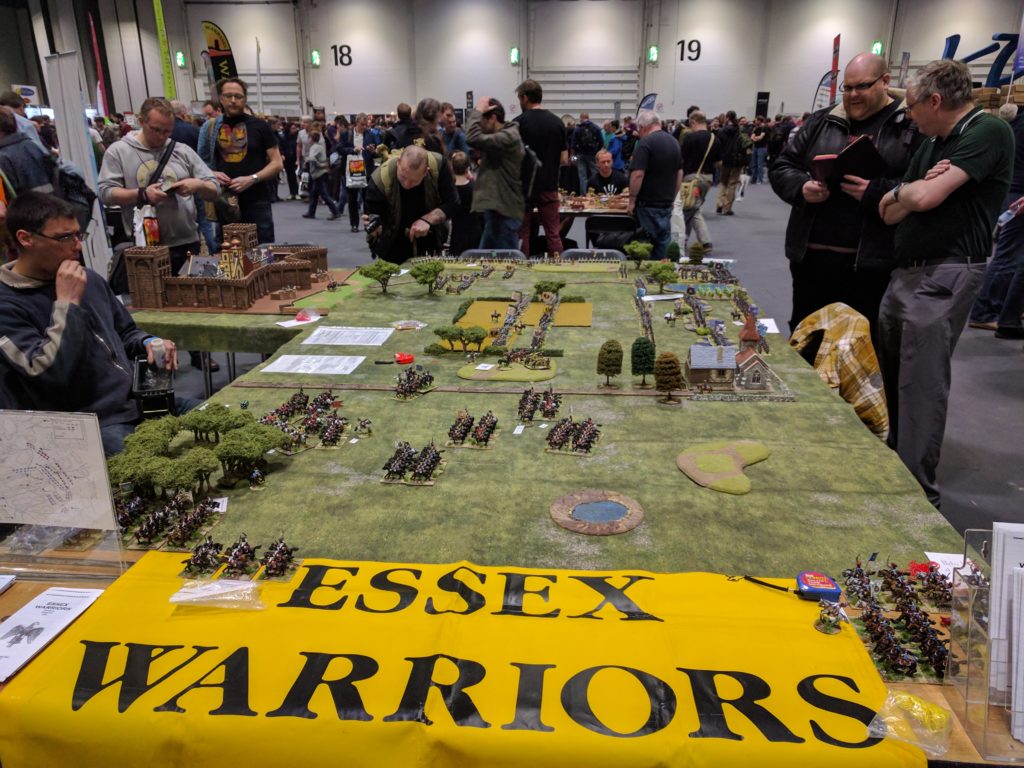 Not my usual type of game but I thought I would grab a shot of the Essex Warriors’s ‘Battle of Prague’. 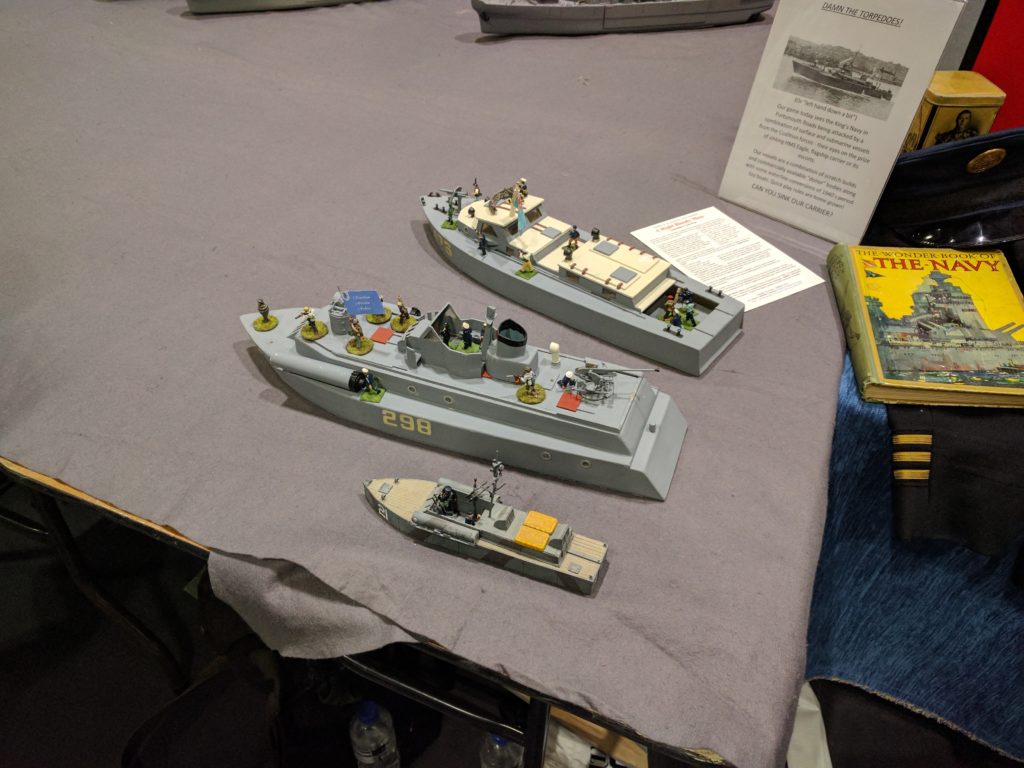 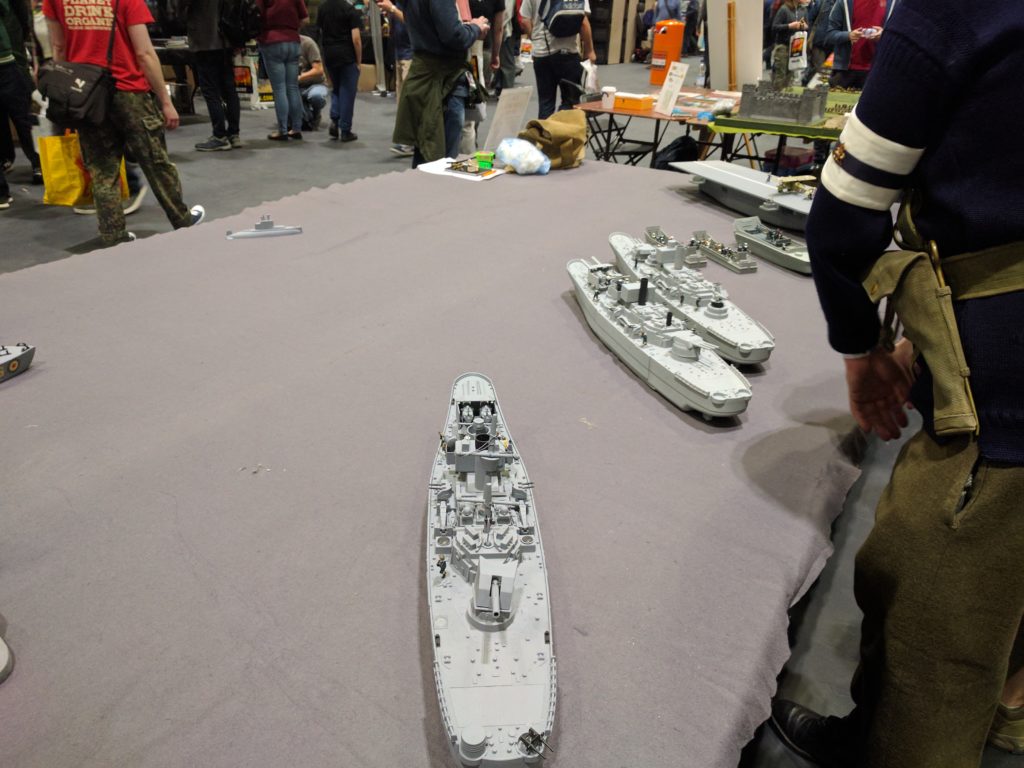 Not the usual VBCW game but anything with motor boats has to be fun.

Overall impression, Salute is as great as I remember it being. With a huge number of games and sellers, it’s a feast for the eyes. There are plenty 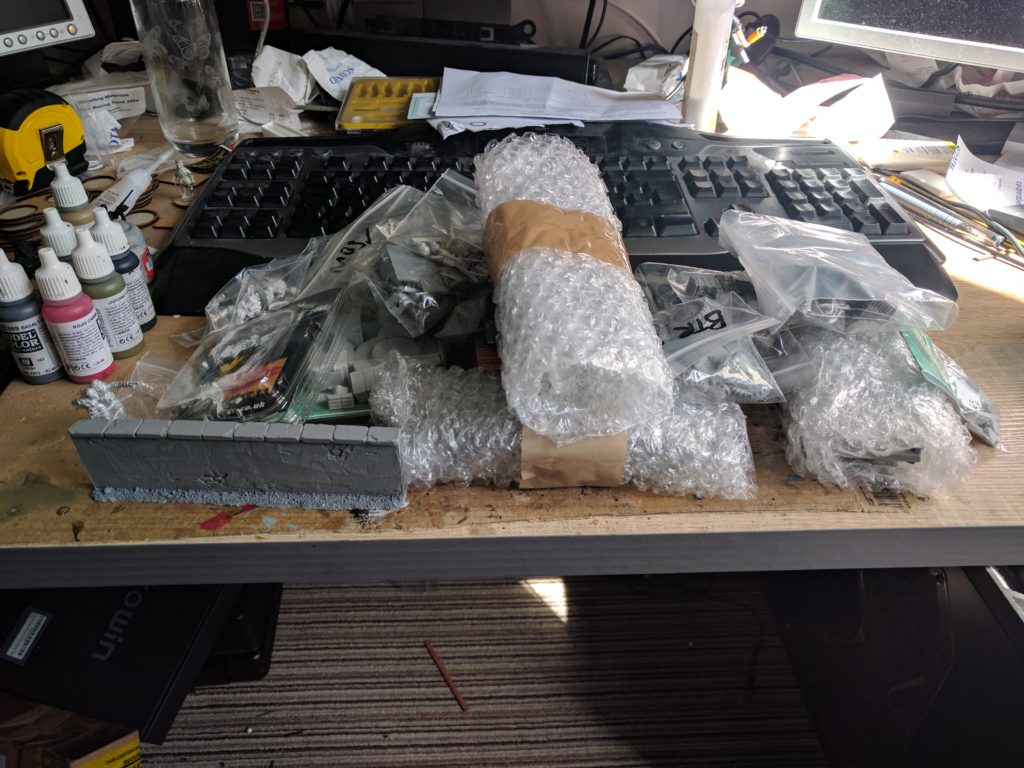 So what did I pick up? Well this can be split in two – what everyone got for free and what I picked up myself.

The free stuff mostly came out of the Salute goody bag

Now for the good stuff

As many people are primarily interested in the wargaming side, I’ll put my conclusion here. Salute is well worth going. Even if you didn’t buy anything, the chance to have a face to face chat with other wargamers and see all the cool stuff they do. Add the buying, and you can very easily find yourself with your whole hobby year planned out.

As for next year I’m in two minds. I will definitely be going back but the real test is if I’m going to take my demo game there. There is something just a bit terrifying about how many people will be there but it would definitely be an awesome thing to do.

After looking around the show, I decided to go take a trip through London and hit two of the tourist sites.

First up was the Army Museum over in Chelsea. Having just been reopened recently, it was somewhere I had to see. Spread over 3 floors, it’s a place that is packed full of information and exhibits covering everything from the English Civil War up to the modern-day. Well worth a trip to, especially combined with the Imperial War Museum. 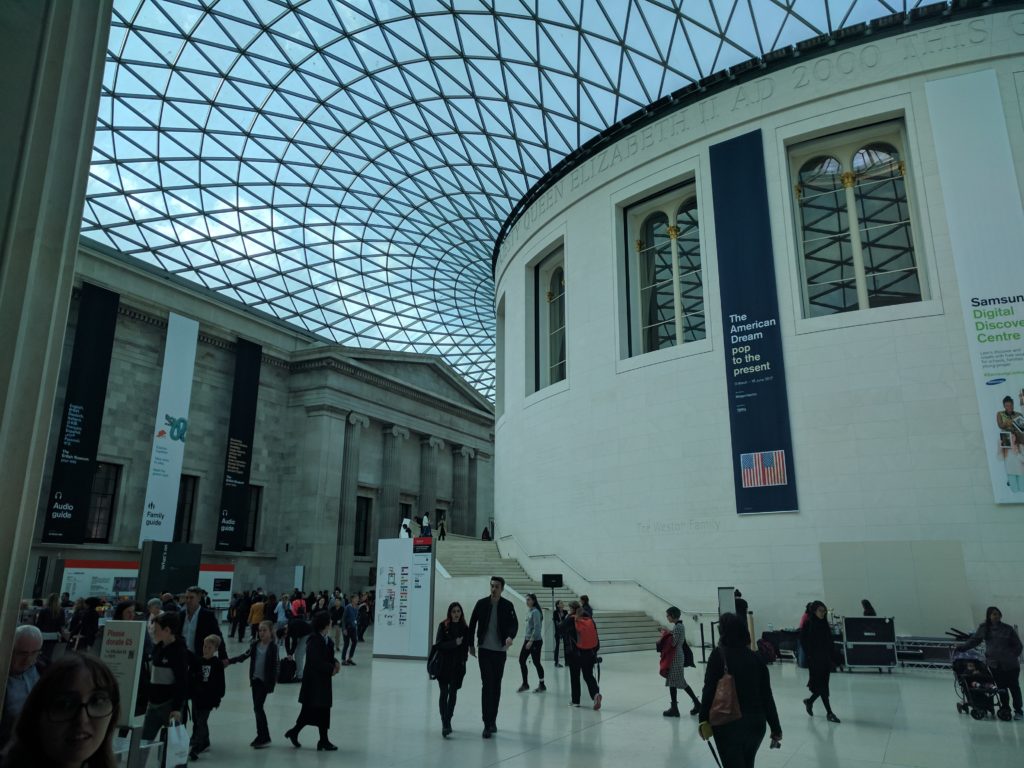 After brief stop for lunch, I then headed up to the British Museum. I barely remember my last visit there and only managed to have a short one. Skipping over the packed Egyptian galleries, I instead headed to the back of the museum and looked through the galleries covering Oceania and the Americas. Both of these are places I know little about but would be interested in learning more.

With that, the last stop was back to the train station and then a long journey home. I find the more I visit London, the less it irritates me. I don’t think I could live there but as a tourist and someone who enjoys walking to explore, it’s the perfect place.