Let’s start, covering the 17th of April through to the 23rd of April.

The first was a battle report of Thursday’s game at the club. Spectre ops, tanks and technicals. A few more thoughts below.

The second was my recap of the Salute weekend. It’s tired me out like you wouldn’t believe but I had an excellent time.

Using Spectre on Thursday, there was some fast paced action from the tanks, smashing its way through the rebels. I feel we were pushing the spectre rules to their limits but after talking to the guys on Friday, I can see it was more designed for a few technicals or an SUV rather than a horde of armour. Possibly cool rules coming up?

However, I have also received a few other things. A friend of mine from the club has passed over his moderns collection. It comprises of a load of Mongrel Miniatures Russians, a few toy AFVs and a few toy cars. Completely unexpected, but I have ways to use them. Really don’t want to repaint them but they are on penny bases and it just feels wrong.

I also, after meeting the team behind it at Salute, picked up the rules for Tribal as something to have a read through and enjoy. You never know what you can learn from a ruleset.

To end though, I think I’m going to dial back my purchases until Claymore in August. I want to bring my painted percentage up and be a little pickier about what I buy. There are one or two upcoming items that might get past the screen (British AFV crew ready for Boar Fighter for example) but mostly it will be months of painting and terrain building and board preparation. 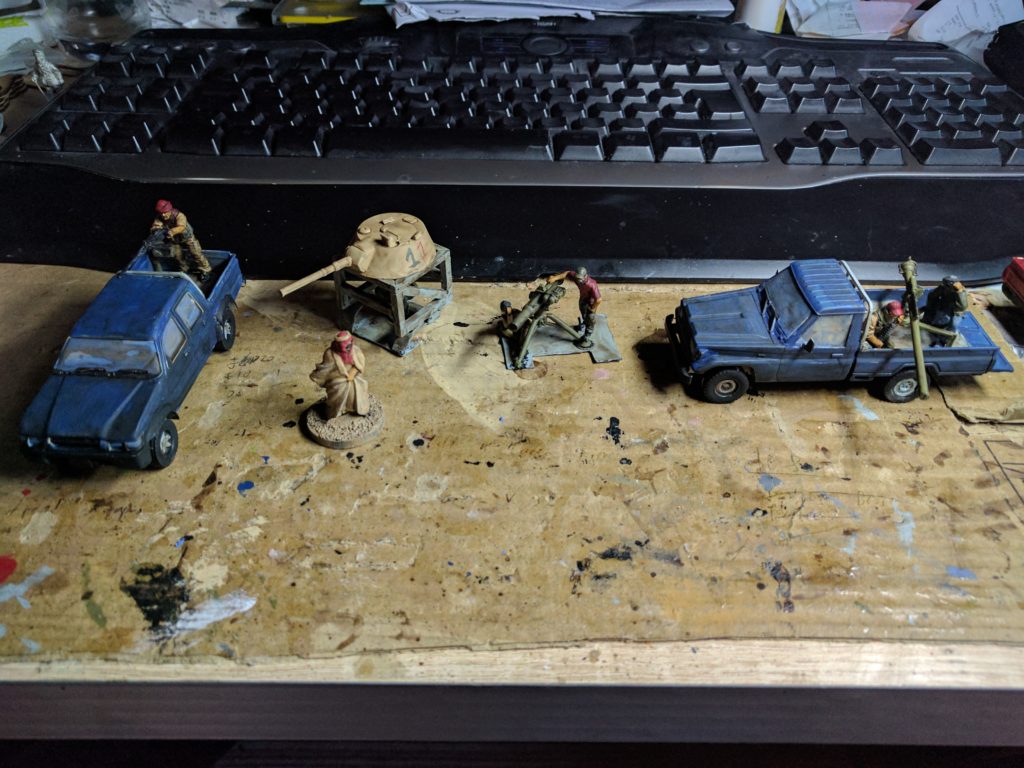 The big thing this week was a rush to get some more technicals and stuff ready for Thursday’s game. Very happy with them (even if they were speed painted) and glad they are ready to play with. The only bit of technical stuff left is the two AA guns and the last .50cal gunner. I also managed to paint up the sheikh thanks to the tactic of douse in paint and wash.

As always, still working on simple jobs at work. Started painting the base layer of the desert marpat on all my marines.