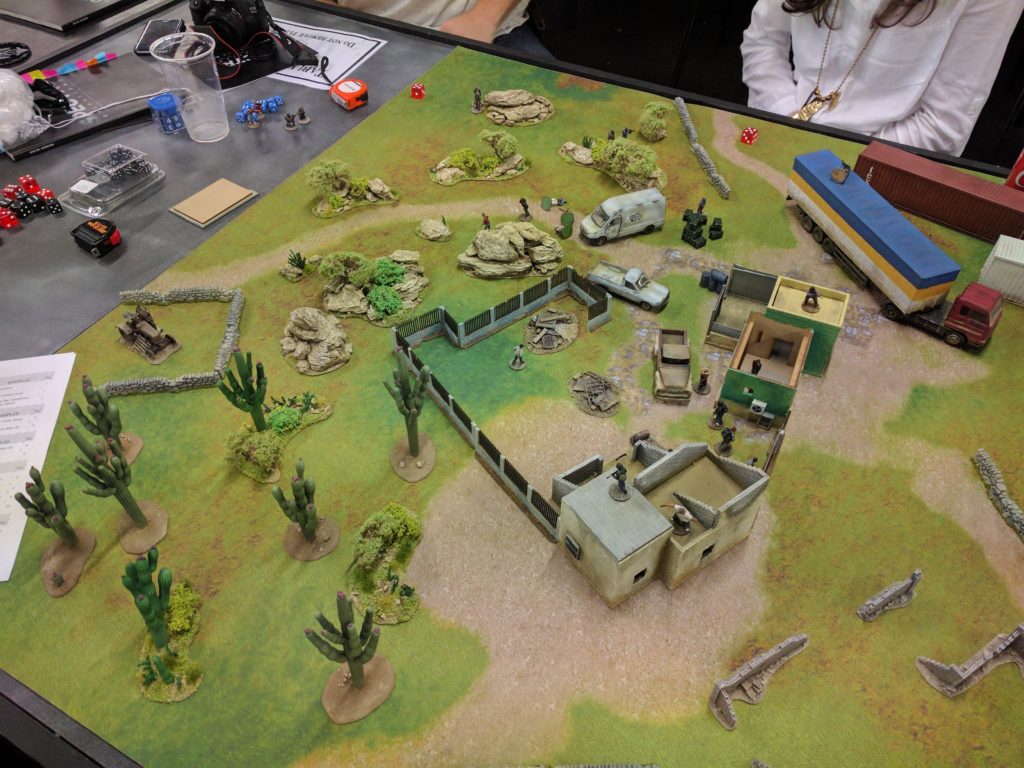 Val Verde: A team of deniable operatives working for a Cartel is closing in on a facility owned by their rival. Their aim? To take out El Jefe while he is out in the open. Two problems: El Jefe has surrounded himself with some Bad Hombres and worse, the team don’t know exactly what the target looks like. Will El Jefe be able to escape?

After having got my first game in, I was asked to help out with introducing the two new players from game 1, Laurence and Jess, to actually playing Spectre with a small game to show off what the rules can do. Lawrence took the Elite Operators while Jess took the role of El Jefe.

The sides were as follows:

4 Elite operators all with frag and smoke. All weapons are suppressed.

This report is going to be pretty quick as I was too busy running the game to take pictures.

To begin, the elites crept onto the board, moving for cover to begin the infiltration. In order to find El Jefe, they had to perform a scanning action (taking place in the command phase and requiring the operator not to to move). Luckily for Jess and me (it’s hard to run a game if the objective is taken out in the second turn) the first civilian wasn’t the target.

After realising that actually most people would be alerted if a suppressed weapon went off due to the small size of the board, Lawrence took out one enemy stealthy before deciding that no one can set off the alarm if there is no one left alive. Instead, Squad 1 of the Defenders got wiped by a pair of frag grenades and the elites started advancing on the compound. However, one of the sentries was able to injure an Assault Rifle wielding operator reducing the squad’s overall effectiveness. The return fire from everyone else took this plucky fighter out.

This reduction however didn’t prevent them from easily suppressing the rest of cartel guys thanks to their better skills and attachments. While getting closer and closer to the compound, Lawrence’s Assassins finally managed to spot El Jefe in disguise. Before he could be engaged, Jess rushed him into a building; sadly it seemed like the El Jefe was going to be trapped in there while the remaining defenders would try to hold off the enemy.

At this point, JT came across and reminded all of us what the objective was – keep El Jefe safe. Rather than getting bogged down with fighting to the last, El Jefe could simply escape and trigger a win. On the other hand, there was a big patch of open ground he would have to cross before safety.

Barely were the words out of JT’s mouth when El Jefe had vaulted out a window and was running for the hills. As the sound of gunfire continued into the distance (including the death of the flame thrower before he managed to get a shot off which was a common trend on the weekend), El Jefe full on sprinted towards the board edge; with a few hints Jess kept him out of the LOS of any of the Elites and just out of range of any thrown grenades. With only three inches in it, El Jefe moved off the edge of the board and escaped, giving Jess a win.

Overall, I’m really glad that everyone left the game having enjoyed it. The elites are really powerful in the right situation but the ending helps to drive home the point that even the best fighter can lose based on the objectives. Running a tutorial for new players was pretty hard work but was a cool experience.