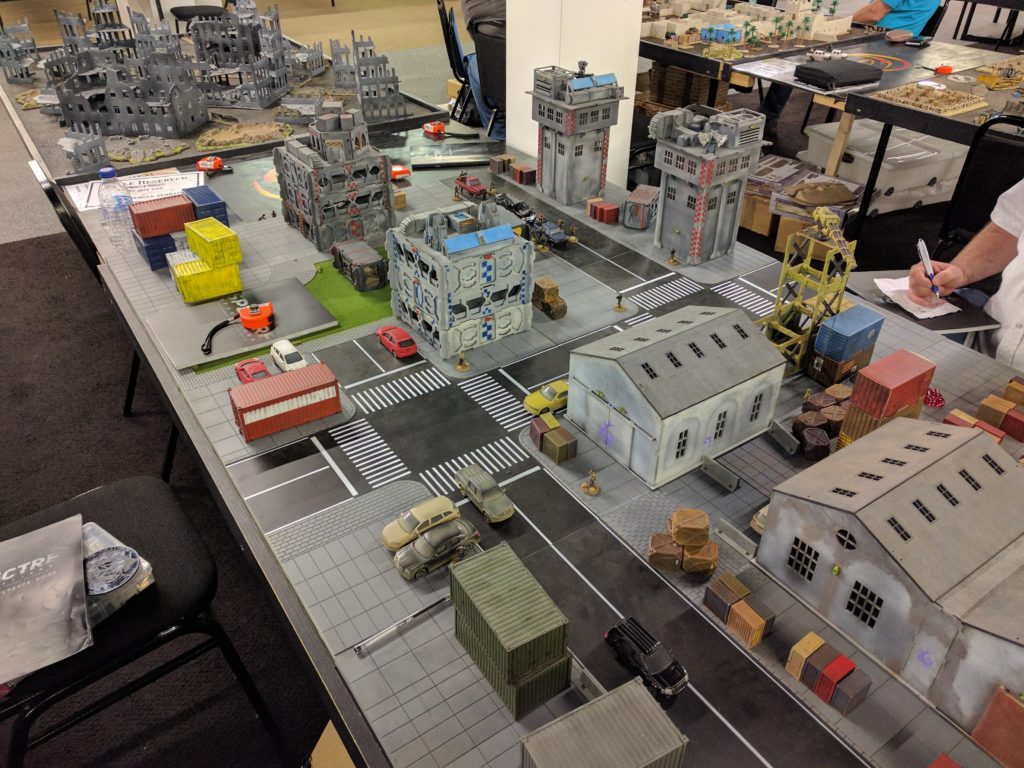 Jazan, Bazistan: an Emir in charge of one of the Bazi Militia is heading home after a meeting. The convoy is powerful force, thanks in part to the backing of the Argo Corporation. What the Emir doesn’t know is that the Russian GRU have issued a capture order on him and he is about to roll into a trap. Will the GRU be able to capture their prey?

The sides were as follows:

All the Russians have body armour, frag and stun grenades, pistols

The Russians also have an Anti-Vehicle IED which could have been place anywhere on the road. This was marked onto a sketch map. 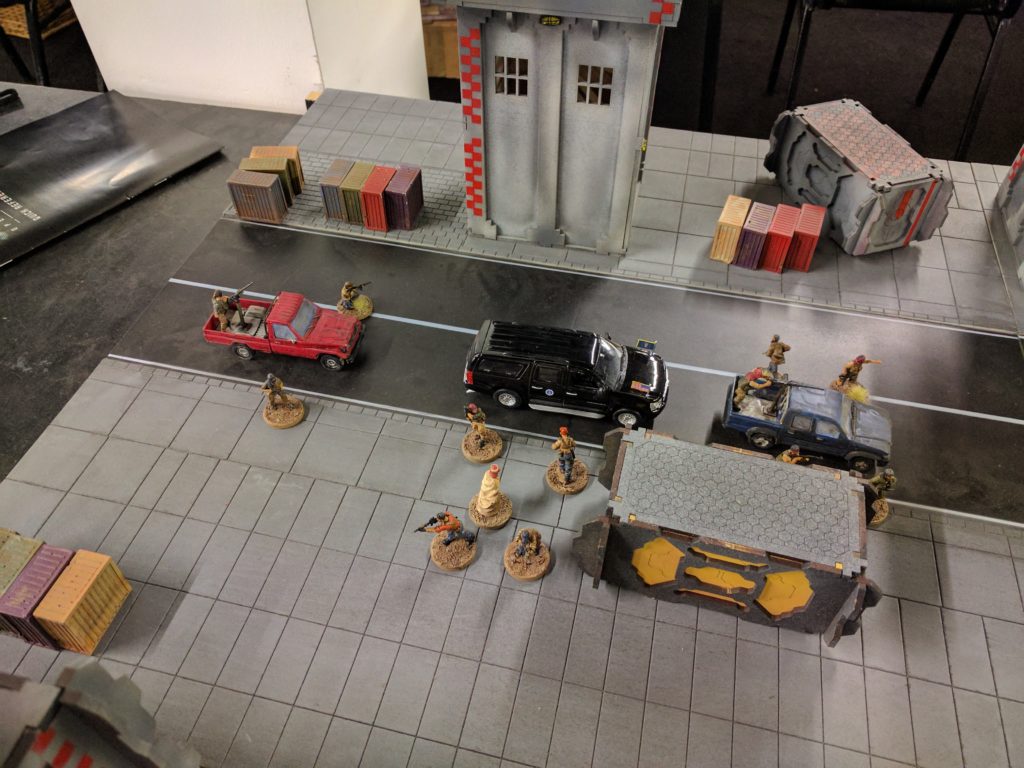 As the game begun, all the Russians were hiding around the board (Craig had marked the positions using a sketch map). Unaware of the approaching attack, the bodyguards and their allies mounted up in their vehicles and drove away at half speed to begin their route. 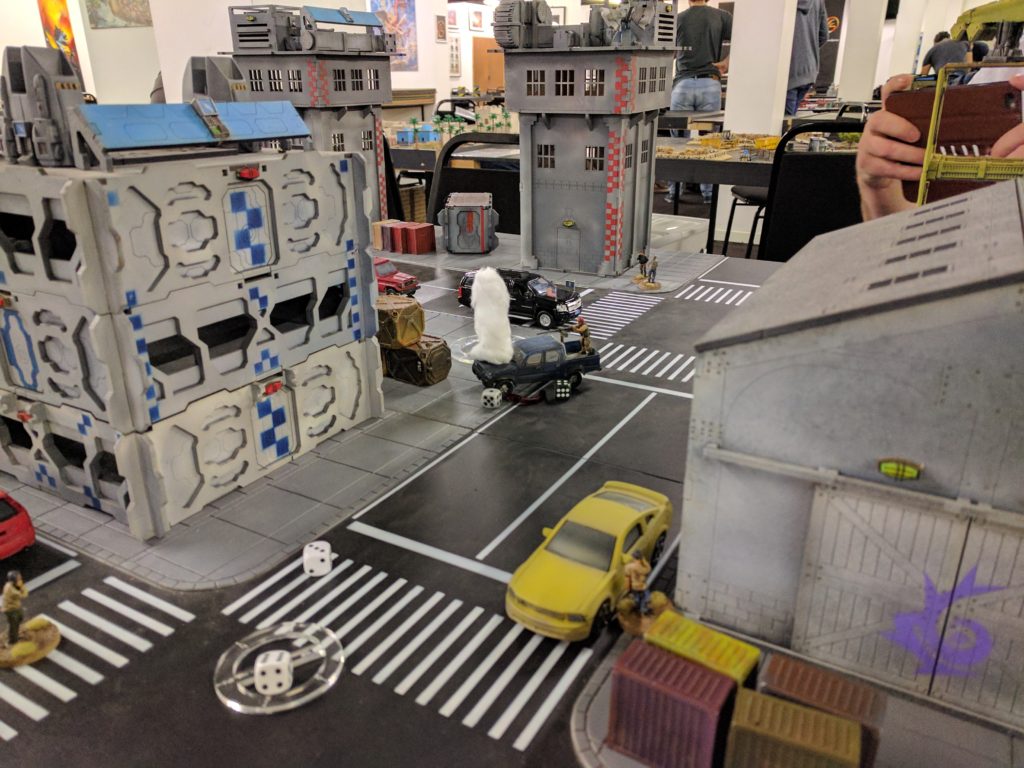 Two turns passed and nothing happened (apart from a civilian wandering into the road). Moving round the corner, the lead vehicle was about to accelerate when there was an almighty bang. The Anti-Vehicle IED had been detonated, throwing the vehicle off the road and stunning those inside. The driver however was close to the blast and took the worst of it, a serious wound that knocked him out and caused him to start bleed out. 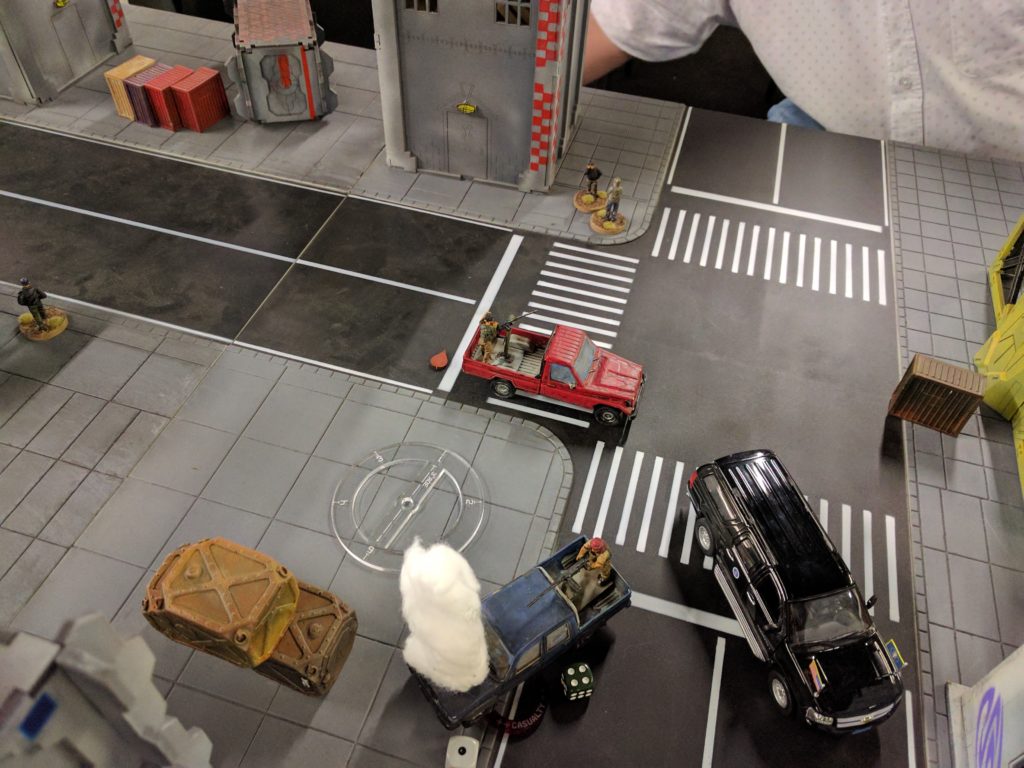 Following protocol, the rest of the convoy accelerated aiming to clear the killzone. However, the were quickly interrupted with more gun fire. The rear vehicle’s gunner was snatched from his mount by a shot that seemed to come from out of nowhere. 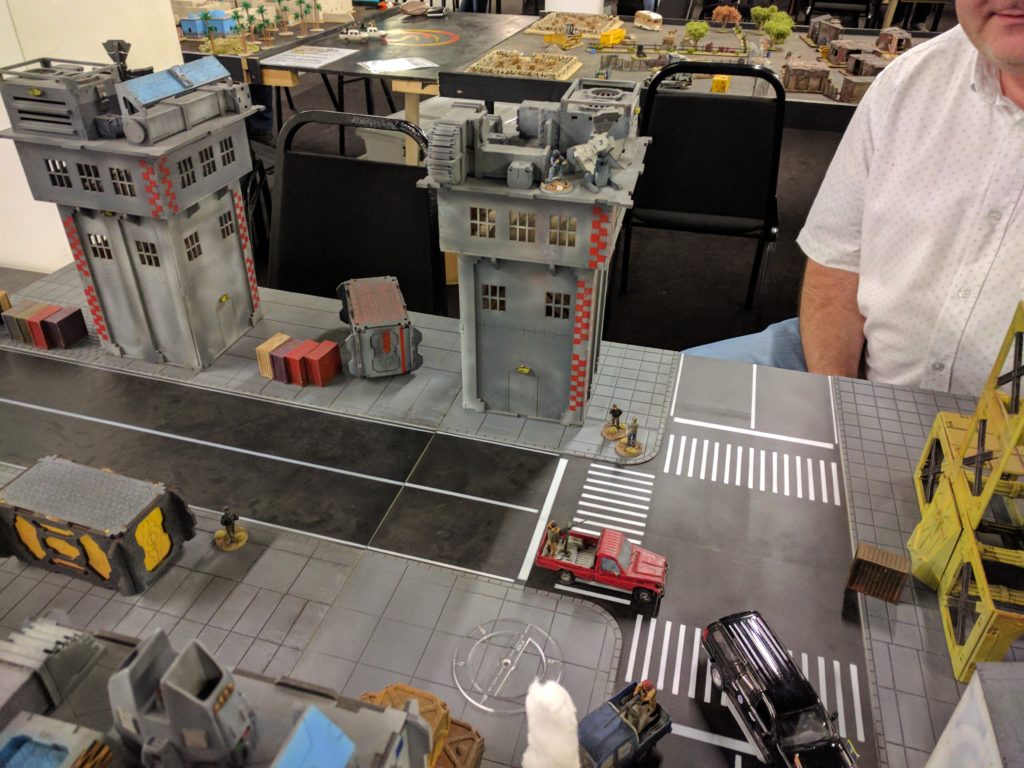 On top of the tower, the Russian with the pump-action grenade launcher pulled away his cover and began to aim his launcher. Meanwhile, on the factory in front of the convoy, three assault rifle wielding figures deployed and started pouring fire down on the militia. 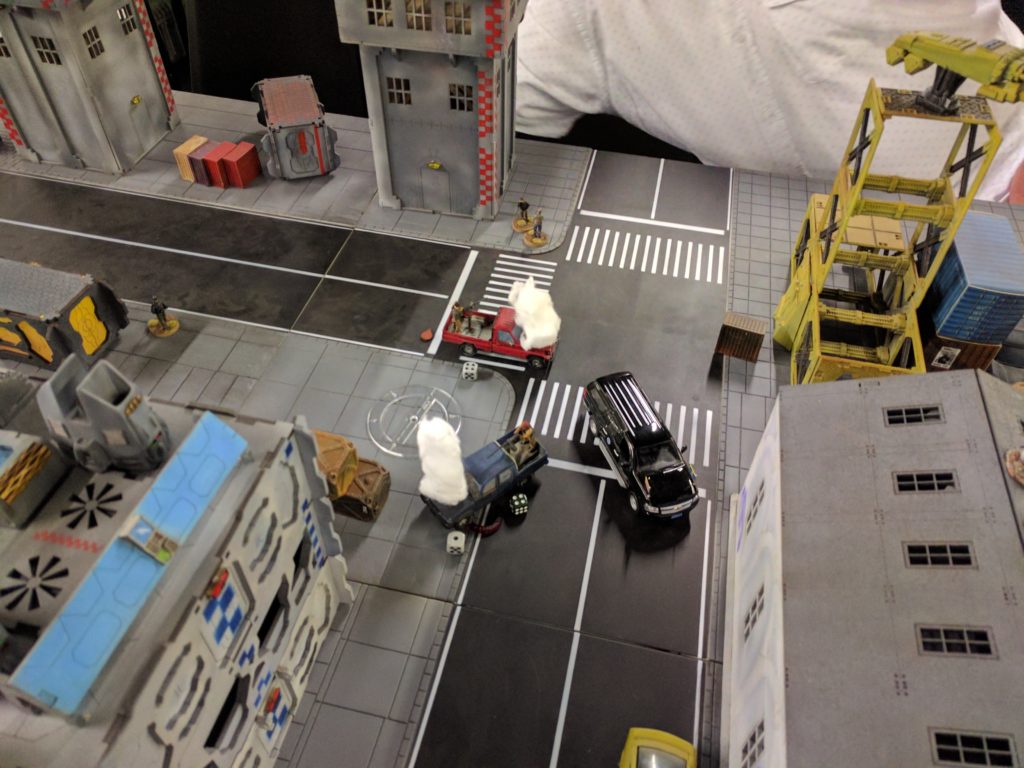 In the following turn, the Russians continued firing, putting multiple bursts into the second technical. This caused enough damage to the engine to halt it. The VIP’s vehicle was now the only one moving, thanks mostly to its armoured nature.

The crew of both the technicals began to disembark, primarily looking for cover against the attackers. At the back, the second vehicle’s crew were moving swiftly to get the HMG back online. In front of them, the Vehicle 1’s casualty was dragged to the rear and out of the firing line while the rest got ready to engage the Spetznatz on the roof. 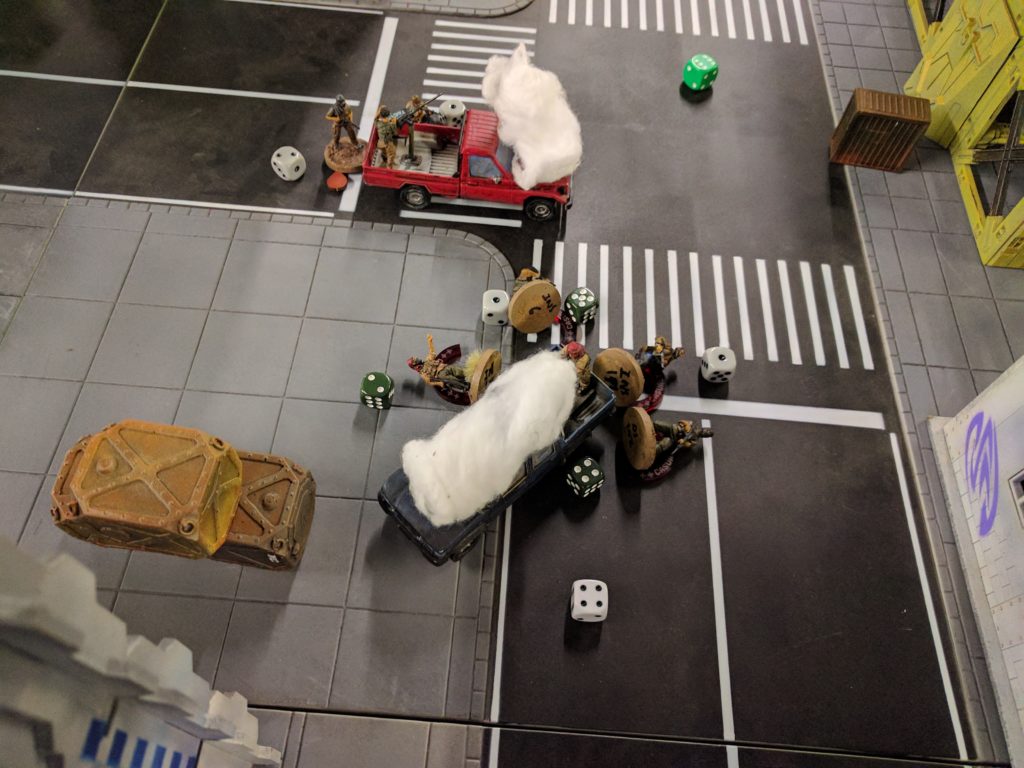 Before the .50cal could bring the pain however, a flurry of grenades from both the launcher on the tower and the team on the roof landed amongst them. The blasts took out everyone from the lead vehicle, massively reducing the ability for the convoy to defend itself. 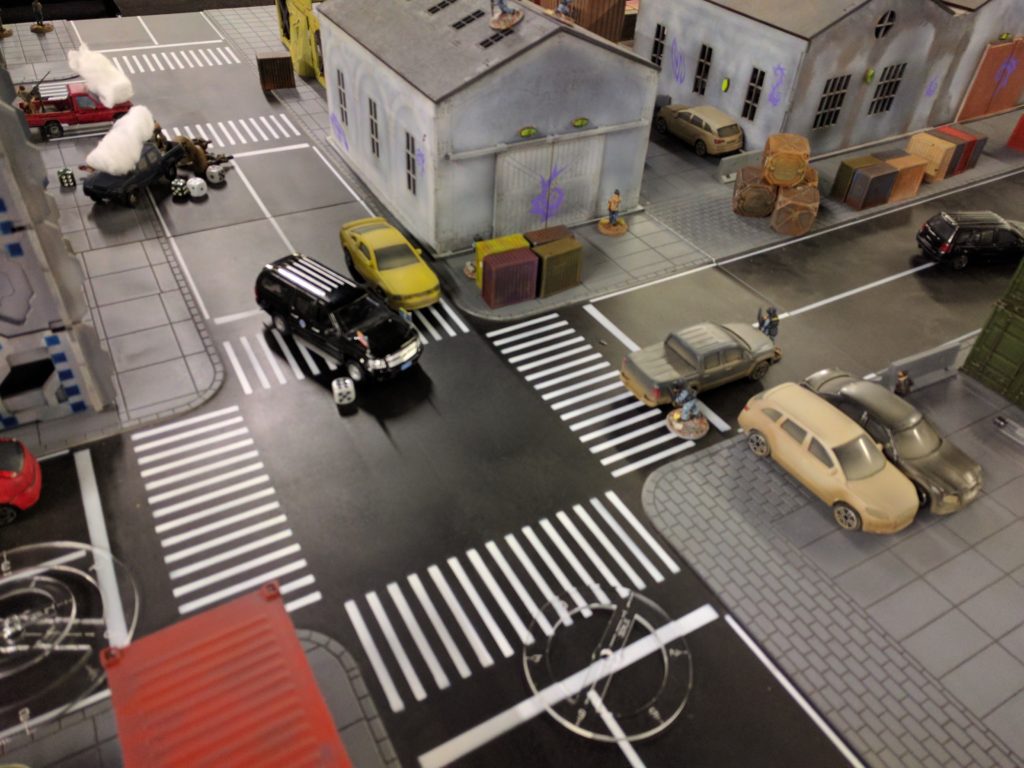 Meanwhile, the VIP’s vehicle had continued racing forward. As they approached the next junction they were shocked to see three Russians in siege gear and carrying shields stepping out into the road. Worse, when they opened up, the rounds were actually capable of penetrating SUV’s armour and caused suppression. 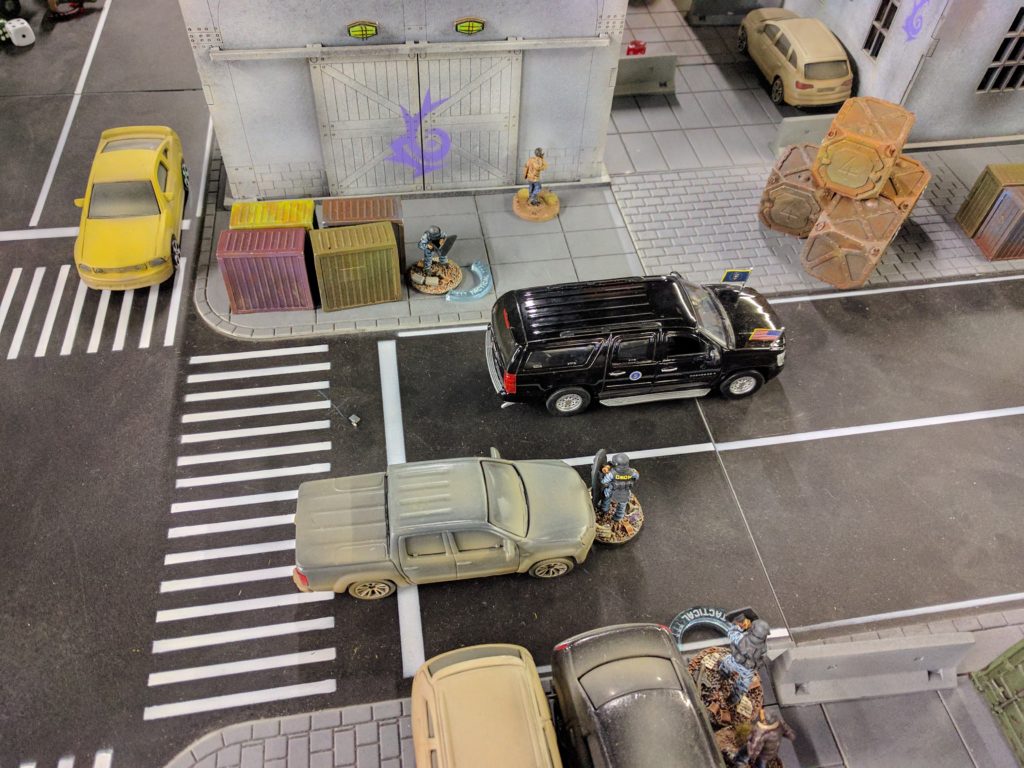 With the sounds of the last of the militia being taken out and the team leader in the back shouting at his driver to push it, the SUV managed to rally and kept racing forward. As long as they could keep moving, there was still a chance the Emir could escape. 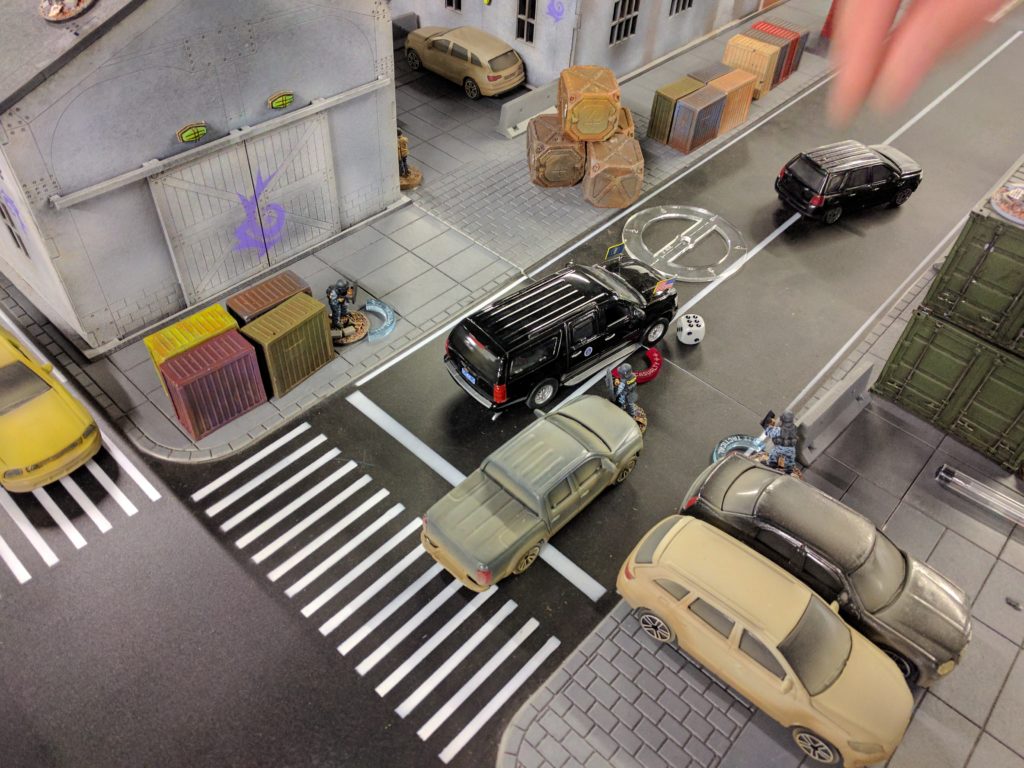 That is until a penetrating shot ripped straight through the door and killed the driver. The vehicle came to a halt, right next to the rest of the Russians. It would take an agility test for the crew inside to be ready to go again as they would need to move the casulty out of the way before they could drive away. 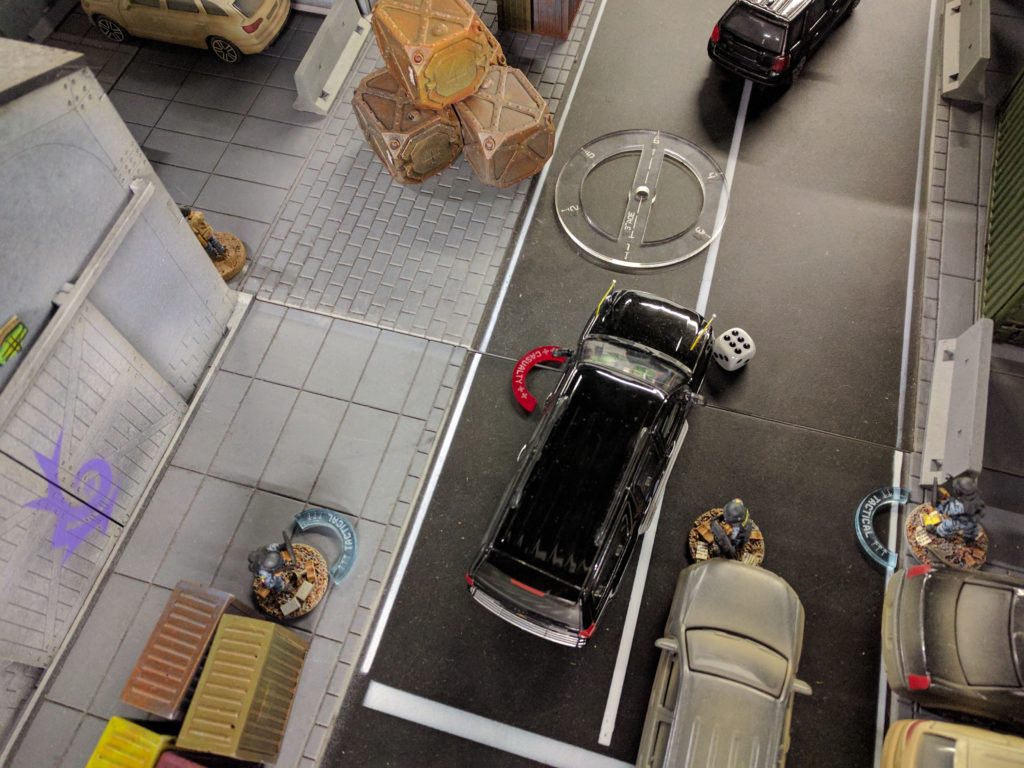 (At this point Ivan quietly reminded us that as this was a US vehicle, the driver should be on the other side. We decided to fix that) 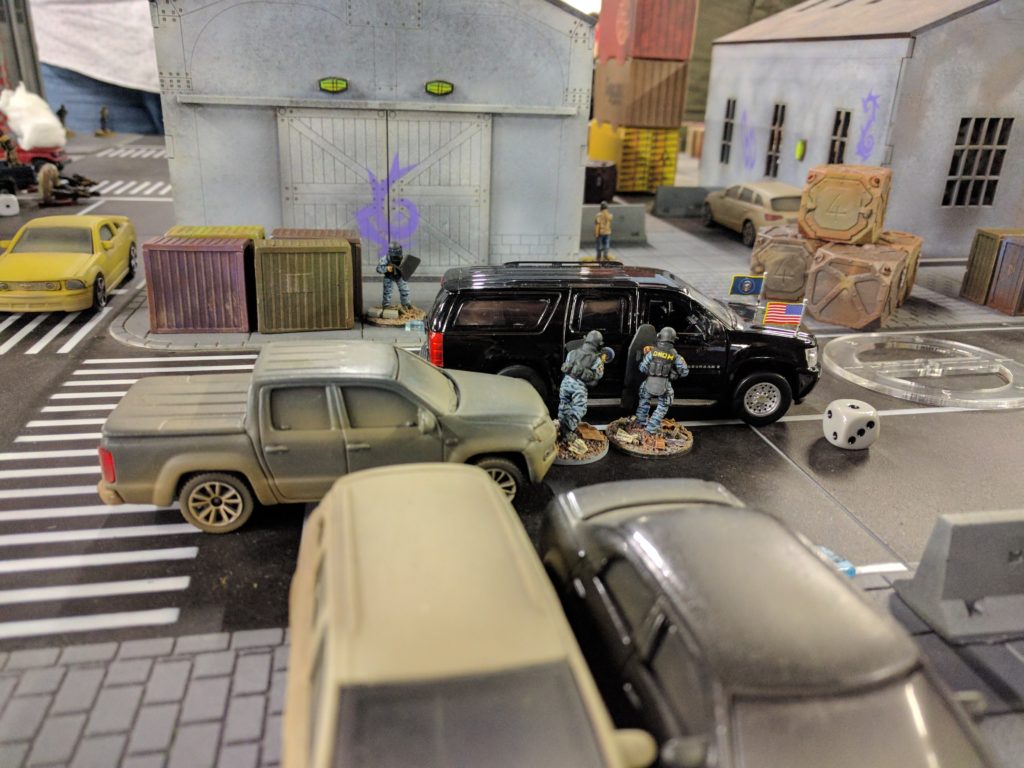 The squad leader managed to rally off most of the suppression but the crew fluffed the agility roll (the driver must have been wedged in place). All around, the Russians were getting closer but the armour was holding. That is, until one of the Russians placed a breaching charge on the door and pulled out a clacker.

I was too busy rolling dice at this point but a ridiculous bit of fighting went down. As the door blew away (stunning the crew inside), the Russian breacher stepped away and his buddy engaged the bodyguard behind the door in close combat. The first bodyguard went down but this just let the team leader put an automatic burst of SMG fire into the attacker. It didn’t cause any damage but it did cause some suppression. Next turn, the attacker shrugged off his suppression and climbed in the back of the car to engage the team leader into close combat, leading to the VIP being exposed as the team leader was taken out. More concerning, the passenger in the front finally got his act together and moved a into position to drive away. 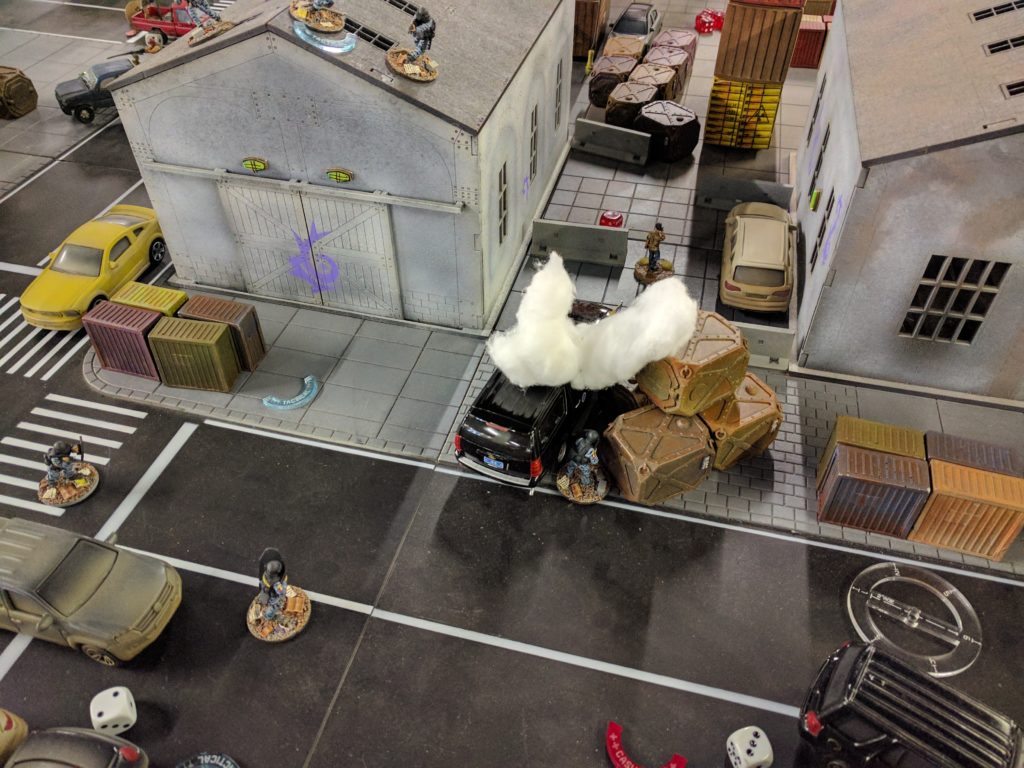 Of course at this point, the driver was very aware of the angry Russian in the back seat trying to abscond with the VIP. Buckling in, he put his foot on the gas and slammed straight into the rear of the car parked across the road. Rather than the gentle tap that would have thrown the operative out of the car, the slam sent the car spinning away. It smashed past some boxes before landing heavily and exploding, immolating all those onboard. I rolled super high on the collision table and the follow-up armour penetration table roll, hence the rather destructive finale.

I had great games all weekend but I think this one takes the top slot. It was so evocative, from the first IED blast through the SUV being breached to the crazy attempt to escape at the end; As Craig said afterwards, it felt just like the opening scenes of a movie. Despite losing all of my guys and the VIP being immolated by my own mistake (man these Argo mercs suck), I still had a really good time.