Let’s start, covering the 31st of July through to the 6th of August. 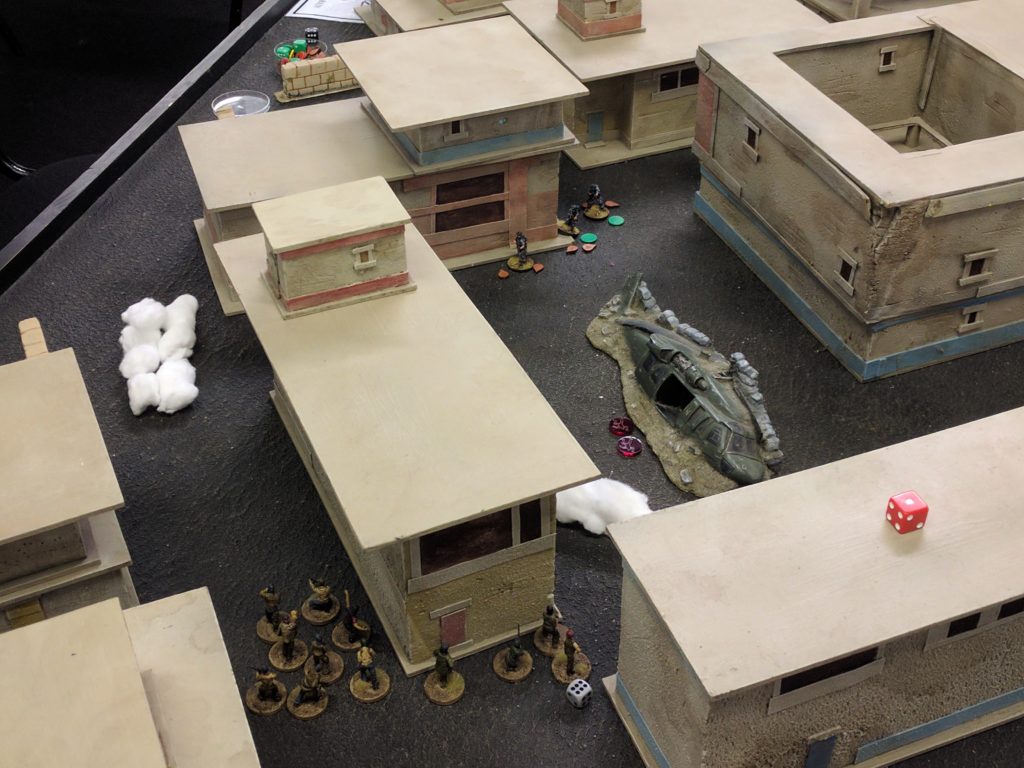 My post(s) about my weekend in Cardiff playing Spectre went up. I wrote a total of 5 posts last week as part of it so around 5000+ words, had to install about 4 plugins to hide the battle reports and not send them out via the email subscription and just as it went up I realised that all the links were broken due to the shift in release date. But overall, it was a pretty great way to wrap up the weekend and I’m really happy with all the people giving me positive feedback on it. Going to be a while before I do anything of similar size though.

I’m also going to do some more playing around with release times after seeing comments and tracking stats of when people actually look at my stuff. The big thing is, people seem to enjoy reading my stuff during lunch breaks (it’s when I catch up on various blogs). So I’m shifting everything to release at 1200 GMT. Wargaming Week is still coming out on Monday but the main article each week is moving to Friday, so I can catch the last lunch of the week and it be available for everyone to read on Saturday morning. Like everything on the blog, this is subject to change pretty quickly depending on what happens.

As for a sneak peek of this week’s post, check out today’s UK BluRay releases…

You know, I think I gamed quite a lot last weekend. Having a little break to start planning out future games and get back to work. Hopefully will be back at the club in the next week or two, hopefully running something by the end of the month. 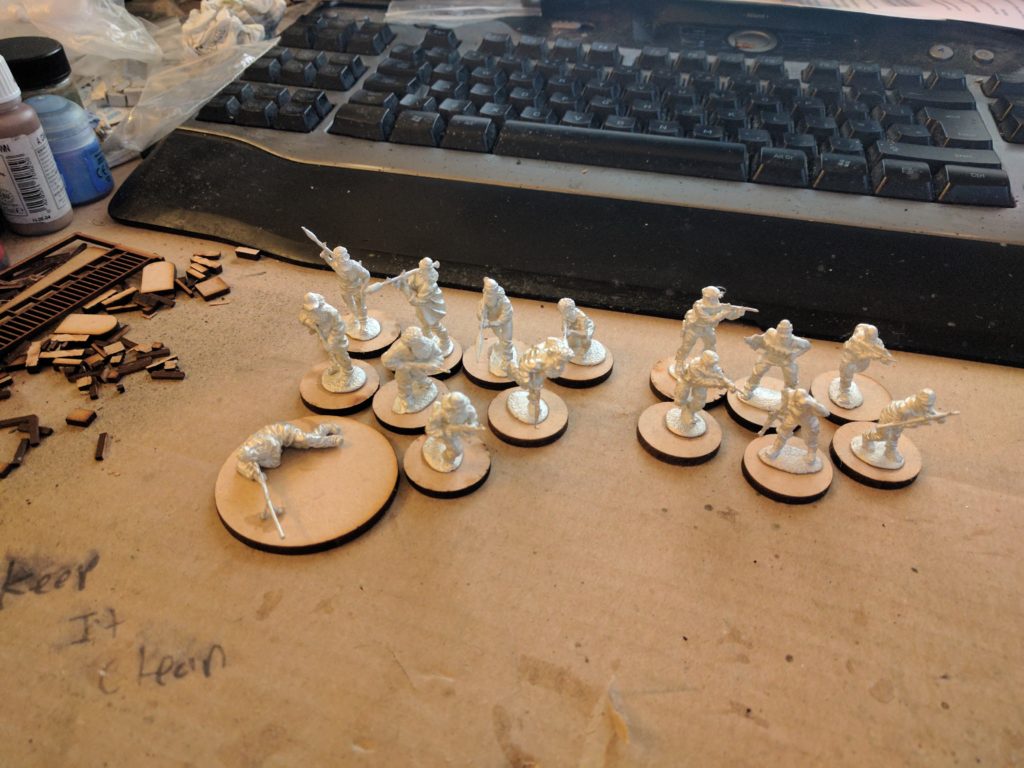 First things I grabbed this week appeared on Monday, just as I was driving home. Spectre brought out a few more MENA militia. These guys look a little more hardcore than the rest of the militia, with their giant beards and jacket/robe apparel. I’m a big fan of the poses as well – the chap with baseball cap and jacket will be great as both for the insurgents and as a local fixer (obviously in a New York Yankees hat). The release also includes four RPG variations (including the terrifying thermobaric round) and a sniper with an Anti-Material rifle. You may have noticed that this guy is lying prone. Now, I hate prone models – for a skirmish game that is focused on true LOS they can be a pain. Also basing them can be annoying (most of my ones from Empress are on cavalry bases). Spectre have gone an interesting route by having the figure lying perpendicular to the rifle, letting them fit onto a round base more easily.

At the same time, I also decided to pick up a few more Spectre models that I’ve been missing. Many of these I had disliked when they were first released but actually getting to see them in person during the Cardiff weekend changed my opinion on them. The main culprit for this is the insurgent commander but the Russian SMG 1 guys are the ones I’m now the most excited about from this pack. 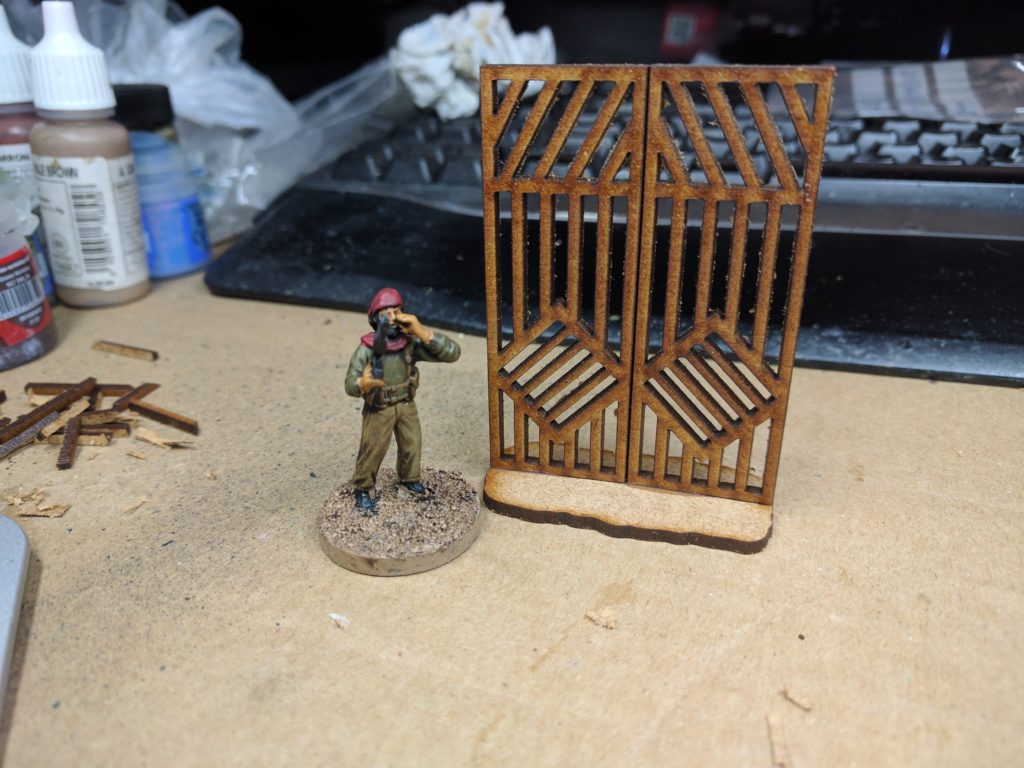 Saturday saw me going to Claymore, the local show run by my wargames club. I haven’t been involved at all due to not being at the club for a few weeks due to holiday/book writing. However, it is always fun to see what people have been up to. As always the show was fantastic and I walked away with something. Supreme Littleness is run by a guy at the club (also a Mike) and is a genius for anything MDF. I had noticed a month or so ago he was starting a range of buildings ready for the Middle East.

I finally got to see them in the flesh at Claymore and I’m really impressed. There are loads of little details to them which are fantastic. I bought one and have mostly built it so expect impressions soon. However, as he was handing it to me at the show, Mike noticed it was missing the cardboard portion pieces. So I’ll be picking that up on Thursday. He also gave me the rather nice Arabic gate you can see in the picture. I really like it, it’s a nice alternative part when you’re wanting to make more urban compounds rather than the adobe and wood combinations of Afghanistan. I’m going to pick up two more gates to be used when they are in other states (such as destroyed or unlocked).

(Unrelated to purchases, hopefully next year I’ll actually be able to run a demo game as I had originally been planned. However, I’m also very glad I didn’t run it this year – it wouldn’t have been anywhere near ready).

The big thing this week was the release of the new SF Technicals, also from Spectre. To say I’m excited is an understatement – ever since the original kickstarter with its mention of the “Tactical Technical” and Minigun, I’ve been wanting some more upgraded pickup trucks for the special forces and mercs to patrol around in. As such, when the new kits got released I went in deep on them. When they arrive I’ll be doing my usual impressions, covering all the bits and building one of them completely but I want to spend a bit longer on the others, adding plenty of details and tweaks. I’m also planning out an additional weapon for the SF using my bits box.

Unrelated, I also picked up a few more tools for the demo board. At some point this week, someone at work is about to wonder why someone ordered 6 cans of spray paint. The plasticard and filler also arrived so I can start basing up all the bits of plane which can then have the final parts assembled such as the missing engine portions. Just under 50 days to go before the first version of the game is going to be run. 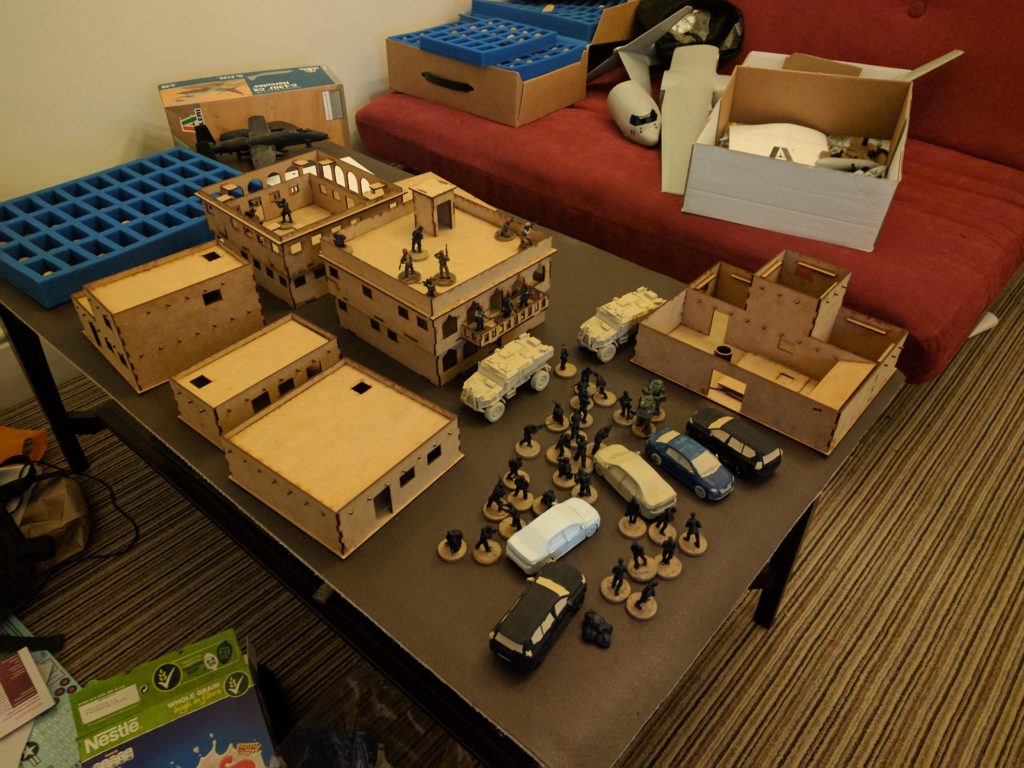 I decided to have a bit of a break from painting so instead I built up a load of MDF buildings. These are ones from RedVectors that arrived before I went on holiday and so apart from dry fitting I didn’t get to build them. That has been fixed. I’ll be doing some impressions in the next few weeks but these buildings are exactly what I was wanting. I’m especially happy with the multi-storey buildings.

The plan for next week is to get back on the painting queue, but also to start looking at the terrain that needs building for my demo game. Speaking of MDF, I finally got my collection out as you can see below. That table is 2’x4′ so it should fill a 4′ x 4′ which is the size I’m building. I have my eyes on a few more MDF constructions but there will be a game coming up fighting through some dense urban areas. 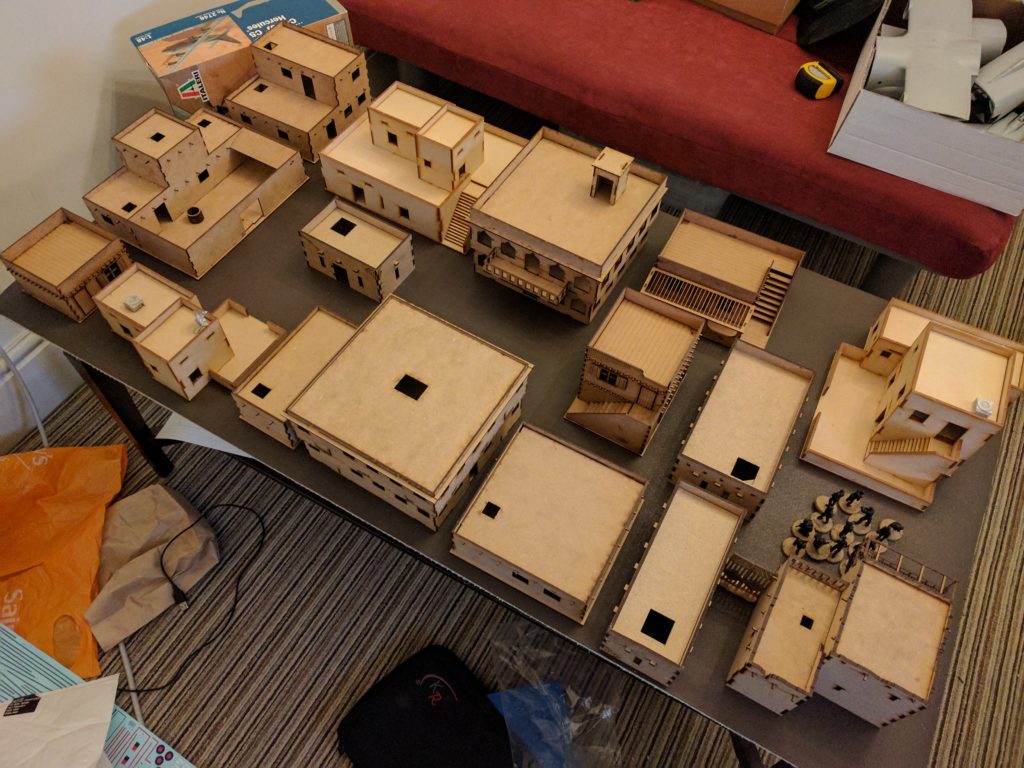