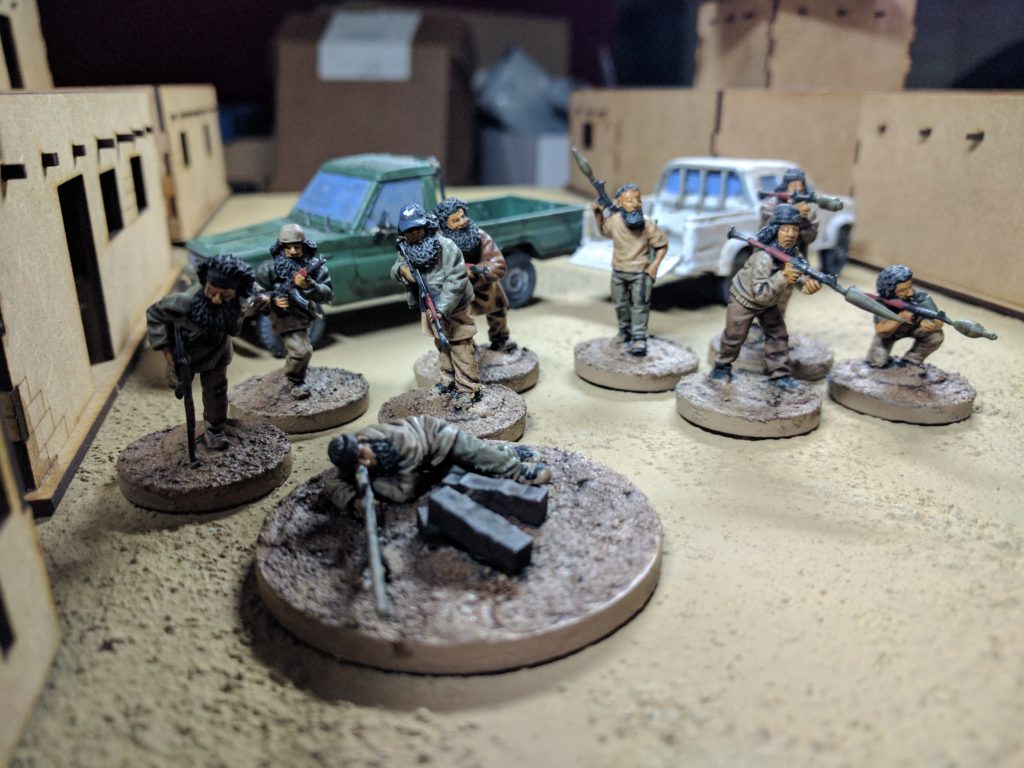 The end of July saw a new release to expand Spectre’s MENA Militia range. These new figures are designed to give your militia a bit of an edge, either by adding some tougher guys or bringing some new gear to the party. If you’re building a militia force, these fighters are a must buy. 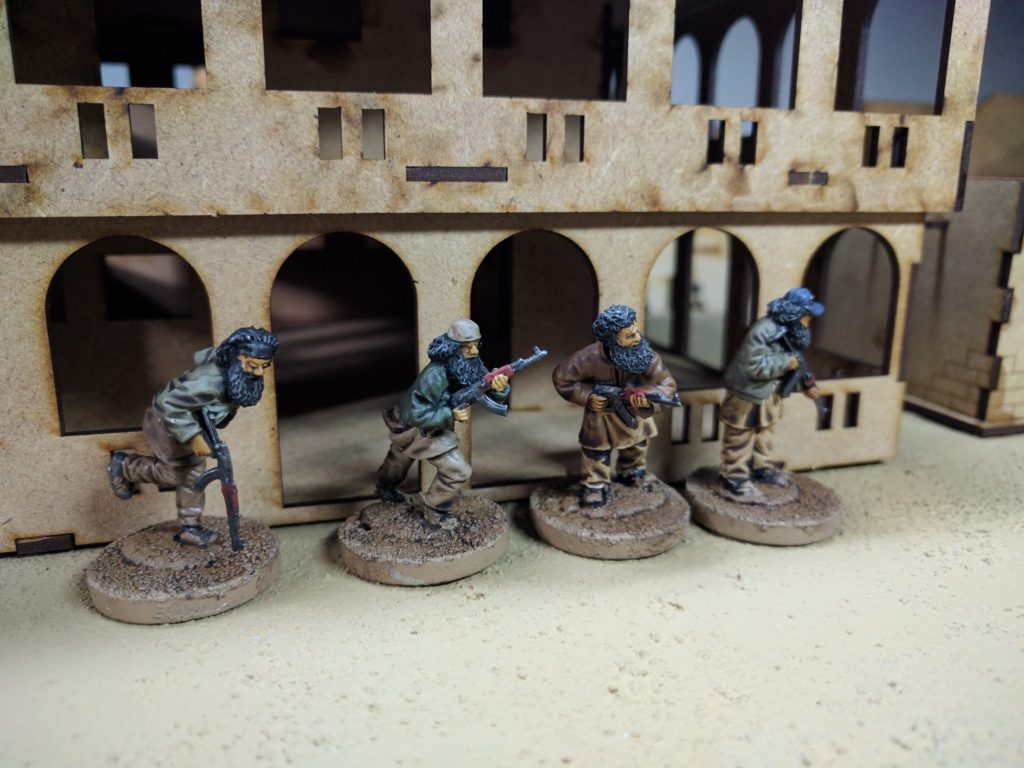 Ready to add to the bulk of your force, these guys look hard as nails. The new packs (MENA Militia Echo and MENA Militia Foxtrot) both contain figures armed just with a standard assault rifle. However, they have a very different look to them making them perfect for use as squad leaders or better trained fighters, characters that need to stand out slightly in the middle of a battle. In particular, I think the guy with the baseball cap would work really well as a local contact or fixer for your CIA agent in the field thanks to the combination of traditional and western clothing. I also really like how they are wielding folding stock AKs rather than the standard version, ideal for urban guerrillas engaged in CQB. 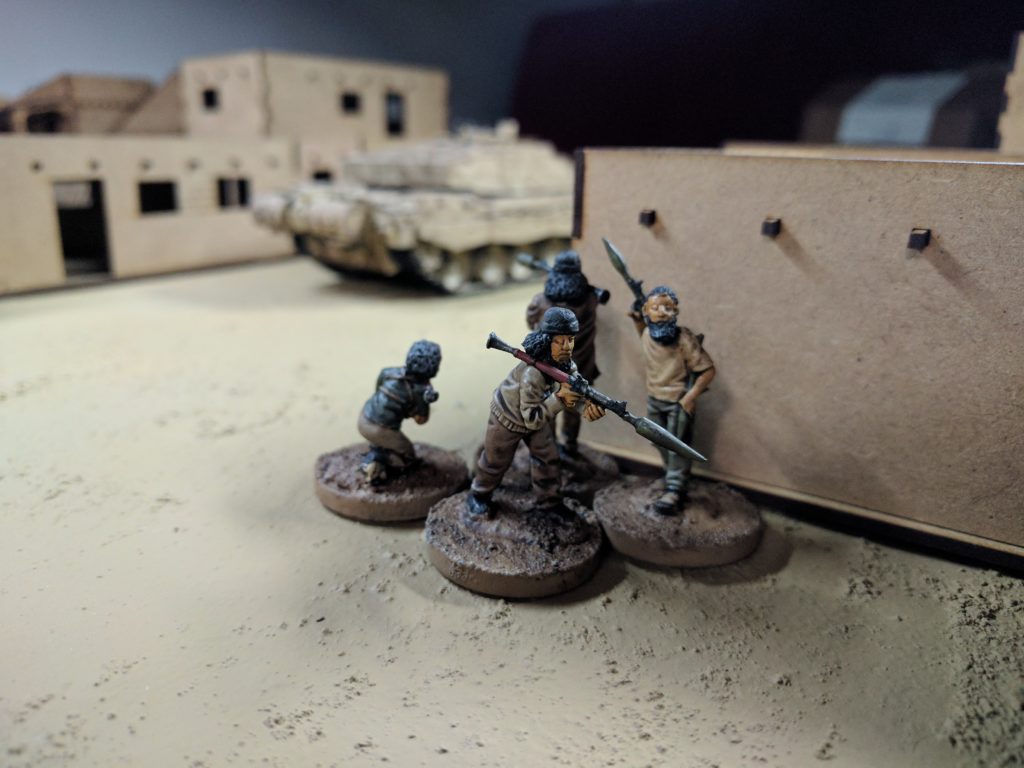 One of the great things with the RPG-7 is the variety of warheads available. Up until this release, the only options with models were either the standard HEAT round or the tiny AP warhead. The two new miltia RPG packs (MENA RPG Bravo and MENA RPG Charlie) help to expand the munitions available to wargamers. Three of the four warheads are variations on HEAT rounds, however all of them are much more modern or unusual (some of them look like the Iranian NAFEZ and Slovakian PG-7M). The fourth figure carries a thermobaric round, superb at destroying bunkers and buildings.

Out of the four figures, one of them looks very similar to the rest of the MENA militia range, clad in his t-shirt, but he holds his RPG and ammo in a very different pose. . The others look much more unique, providing some improved weapons for when you need to knock out the enemy vehicles or clear a fortified position. Spectre doesn’t currently have any new rules for improved or more modern HEAT rounds but expect cool things in an upcoming supplement. 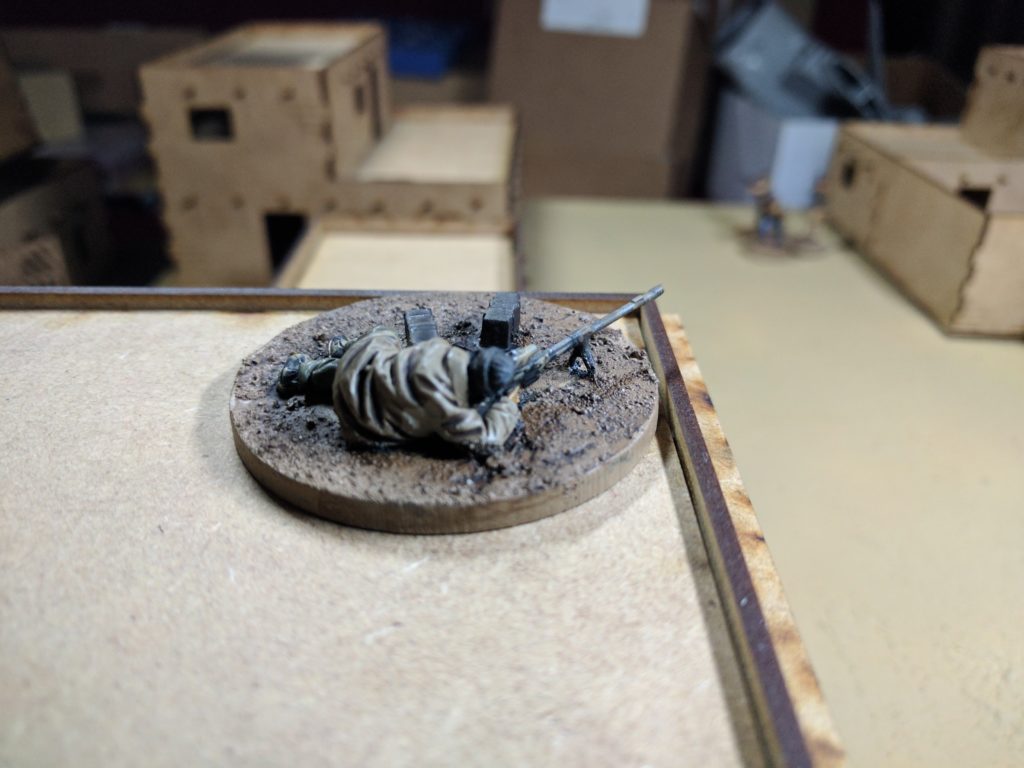 I have a pet peeve with the model industry when it comes to prone figures. With most games I play focusing on real line of sight, having a figure being much lower than any other can be real paint. Additionally, a prone figure can a pain to base. They can’t do much about the figure being hard to spot, but Spectre have done something clever with the posing on this prone sniper (MENA Militia Sniper Alfa). By having him lying on his side, the sniper fits more easily on a round base, a look that is closer to the various other weapon teams. To help fill in the base, I ended up adding some MDF offcuts to form some rubble.

In terms of armament, the Militia Sniper is using a Russian Anti-Material rifle. This is another weapon which should help even the odds when going up against lightly armoured vehicles or troops in cover. In Spectre Operations, the Anti Material Rifle has several useful special rules such as Armour Piercing, Frag and Incendiary that make it a real terror. Alternatively, you could choose to downgrade it to a Heavy Sniper rifle which is still a massive threat to anyone who crosses the shooter’s line of sight.

As with the rest of my Militia guys, the painting plan is to use a mixture of earthy colours with an occasional bit of camo or colour. I ended up just using the earthy colour. There is a lot of black on these figures so my tactic of Black then a drybrush of Basalt Grey was in full effect. The big change was a new colour for the wooden sections on the AKs and RPGs. Rather than using GW’s Rhinox Hide, I tried Valejo’s Cavalry Brown. After my initial panic, the final effect works very well.

One thing I did notice was one of the models had a bit of flash that needed cleaning up. It’s unusual to see on Spectre models but with the pattern on the jacket it’s easy to see how it happened. A quick file and the pattern is gone.