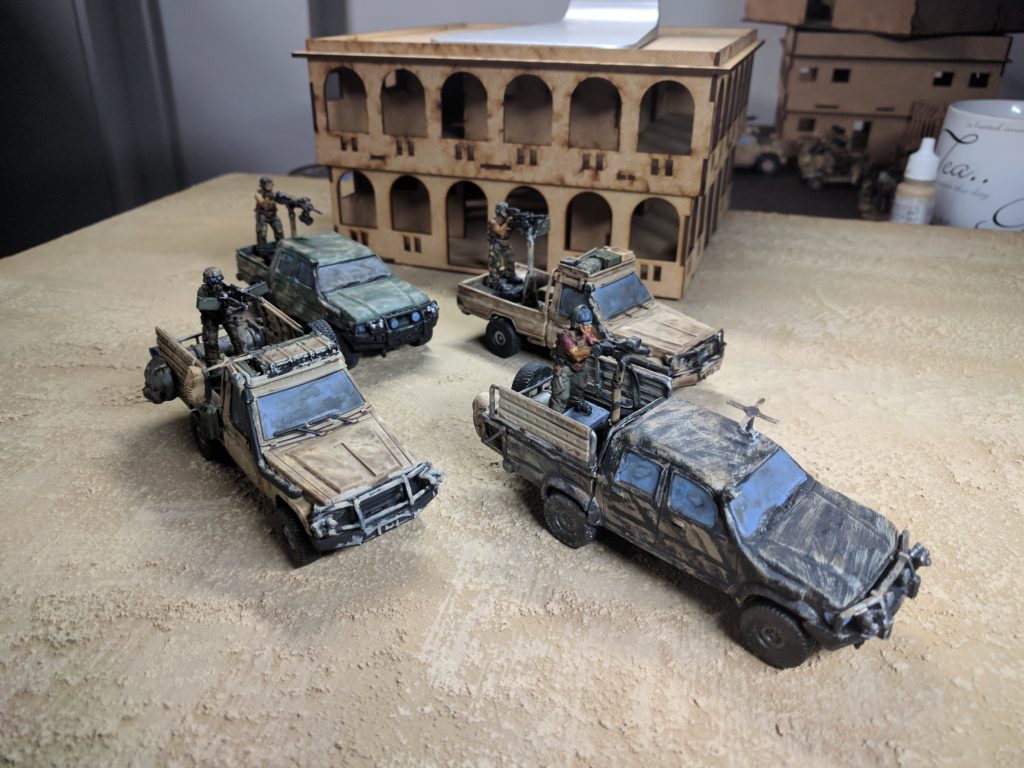 When the full details for the SF upgrades to the technicals were announced, I could see that assembling these vehicles ready to support my operators on the field was going to be a fun project. Thanks to sheer variety of stowage and other bits to upgrade them with, building my Non-Standard Tactical Vehicles needed some planning and careful part purchasing. Thanks also to my obsession with interoperability and hot swapping, I also had to work out the best way to mount all the various bits of equipment I wanted to use. This post is going to take a look at my final products packed full of pictures to show them off.

For impressions of the various parts, you can take a look at my multiple impressions pieces covering both the core sets and the new Special Forces upgrades.

With the possibility of two squads needing transport, I decided to pick up four technicals and set them up for SF use. Looking at the parts available, and after adding stowage, each has been assigned a role. As you may notice, the basic vehicles don’t carry cargo for details you can see later.

All vehicles mount the snorkel and bullbar upgrades as well as the upgraded tyres. Additionally, they all have a similar style of paint scheme – block colour undercoat with stripes of tan. The idea behind this was that these vehicles have been modified in theatre, with the main paint scheme having been fresh from the dealership and then hastily painted over to break up the colour. As for painting it, it’s simple and effective to paint. 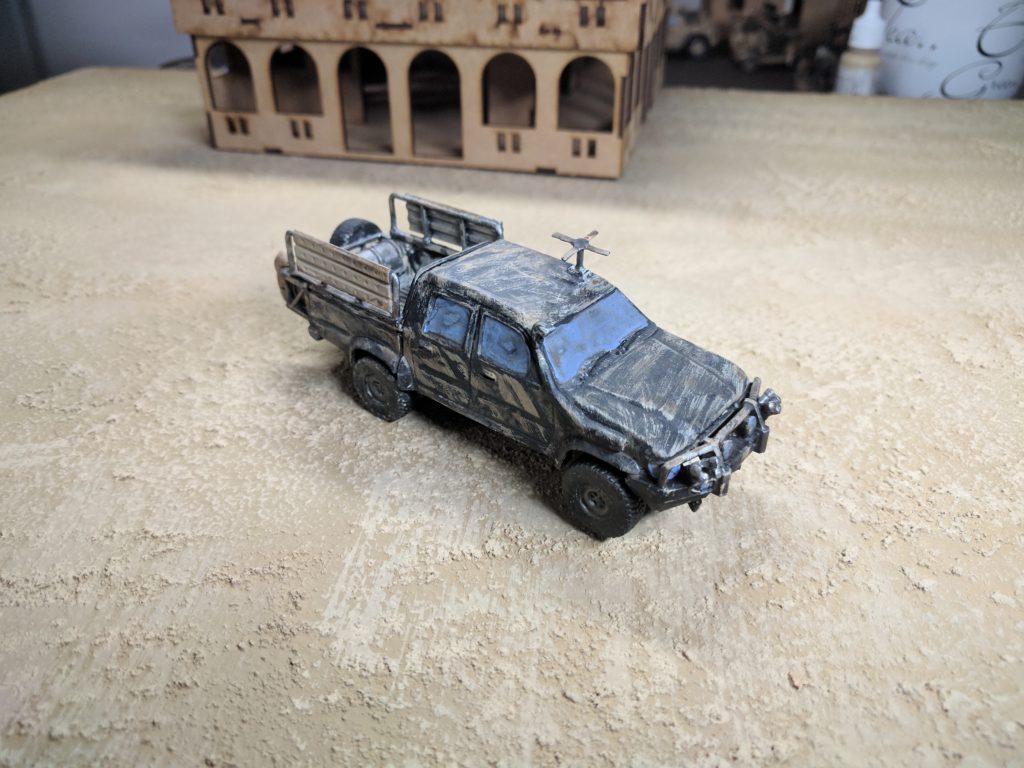 The first technical finished, and having already seen action in Bazistan, this vehicle is designed to be the command vehicle for the group. Using Technical Bravo as it’s base, SF-01 also mounts the Upgrade Bravo set with the rails and rear mounted fuel tank. As mentioned in the main impressions, this pack isn’t designed for this vehicle but it does seem to work quite well. The vehicle also mounts the Satcom aerial, a spare tyre and rucksack on the rear. To help protect the front, smoke dischargers are mounted in the bull bars. 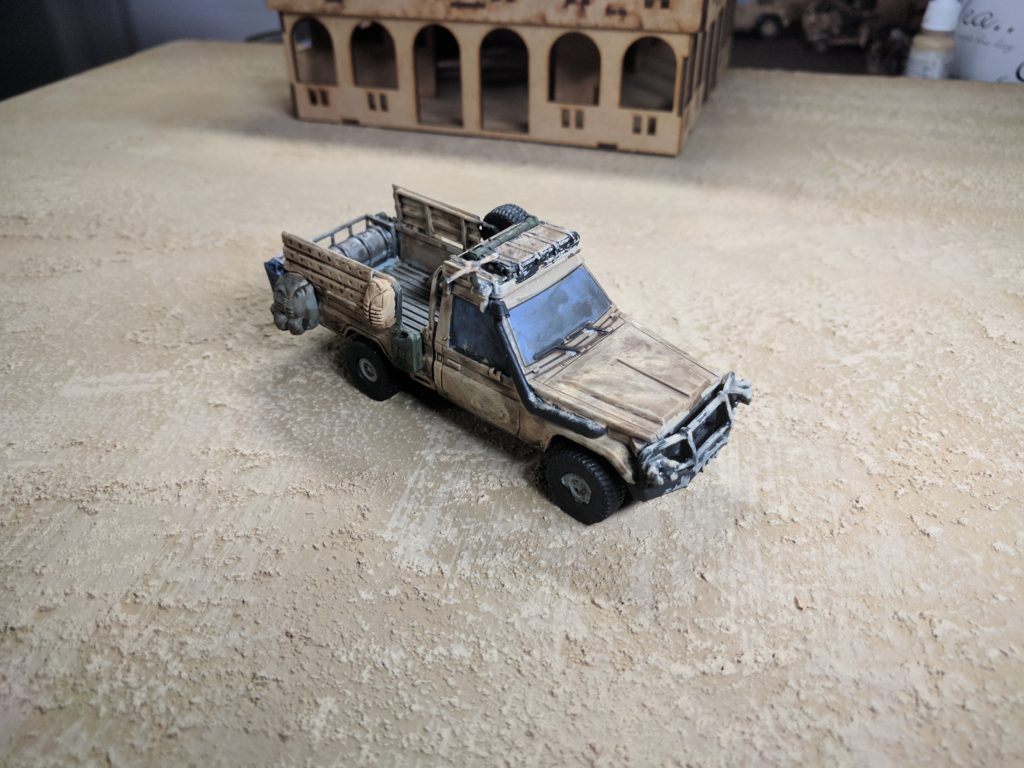 SF02 has another nickname – “Mule”. Using the Technical Alpha as the base, this vehicle is designed as the logistics hub for the group. For this reason, it mounts everything. The racks and fuel tank help to bulk it out but it also has multiple jerry cans, rucksacks and a spare wheel hanging off bits. On top of the cab, the storage rack is designed to be ready for the offensive. A LAW, an AT4 and a pelican gun case help to show off the idea that this is where all the heavy weapons are stored. 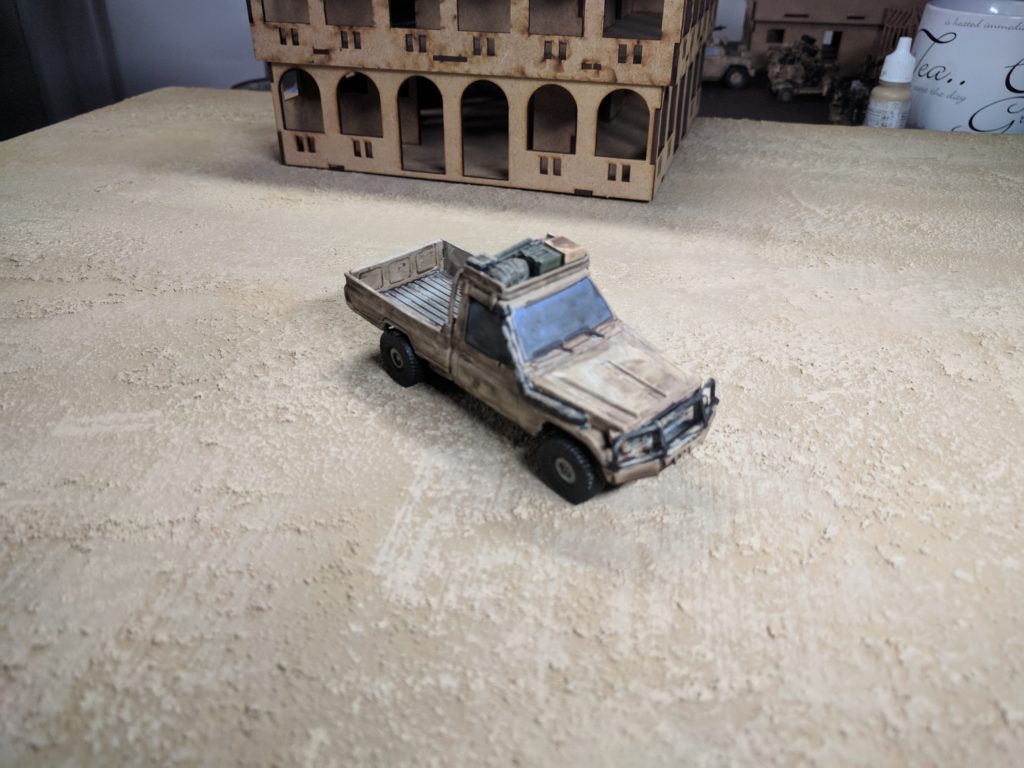 “Jack” is designed to be a multi-role vehicle. It isn’t the most well equipped vehicle but it provides a good enough platform for whatever is needed. The only upgrade is the storage rack that has multiple different items ready for support. Two LAWs, a rucksack, ammo box, small pelican case and a ration box means this guy is ready for patrol. 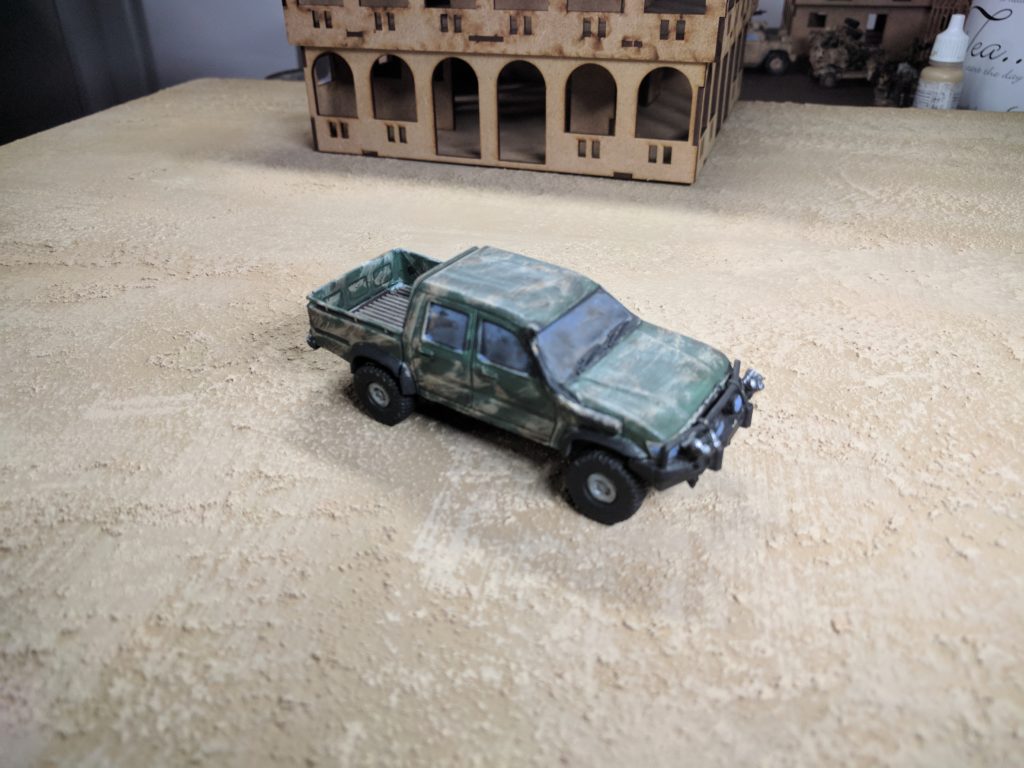 SF04 is the high-speed off-road part of the patrol. The only additional bit of kit onboard is the multiple smoke grenade launchers. This guy will go everywhere and then get back out of there at a rapid pace. The real reason for no stowage? I’m leaving the roof space free in case a roof rack becomes available. Also there might be more stowage packs filled with new goodies.

When buying the technicals, a big thing was to make sure they were modular as far as possible. The main reason for this is that it doesn’t limit me to a specific combination of vehicle + weapon system and so that all the vehicles can be use for scenery without having to explain why the gun crew are not on the map. 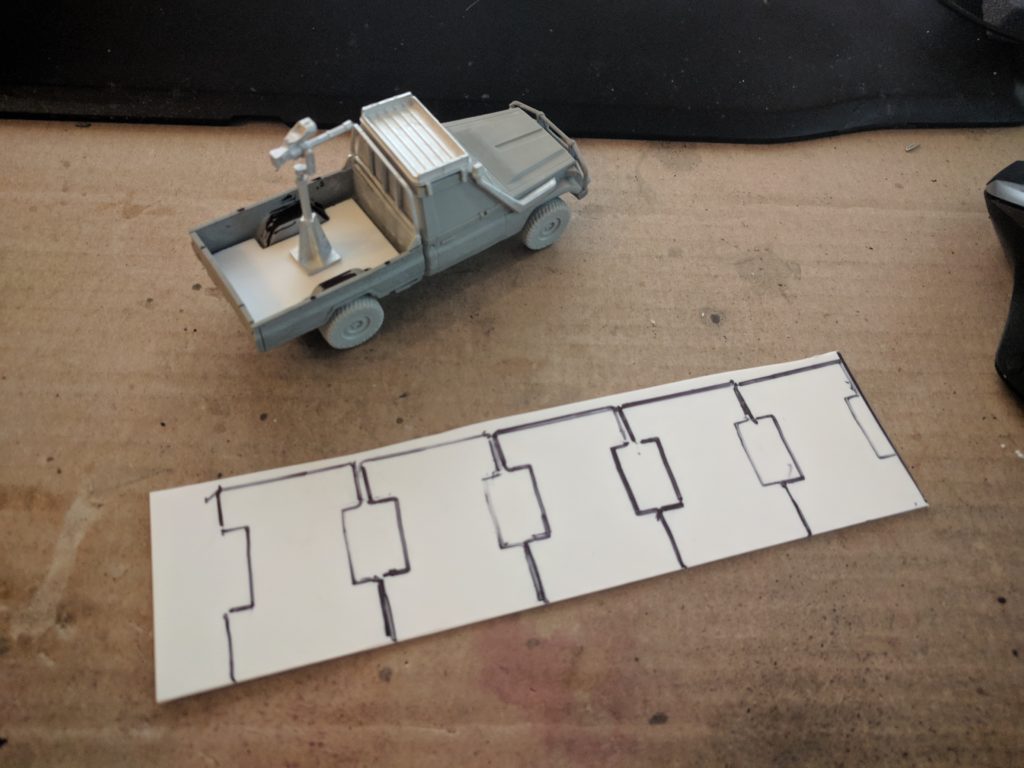 Previously, when building the technicals for the militia, I had used several long pieces and various combinations of t-shapes made out of plasticard. However, this lead to some dodgy cutting and a few places where the guns were out of balance and liable to tipping over. This time, I standardised on the I shape throughout. Full size weapon use the entire I, half-size use 3/4s of the I with the remainder having stowage added to it. Mounting the rear weapons on both types of vehicles rely on a few rough cuts to tweak them to fit. This will need to be done by eye as I don’t have exact measurements for it.

A few people asked about a template for this. The reason I haven’t got one is that this, like many things I do, is done by the seat of my pants. Each of the shapes ended up being slightly different . The dimensions are approximately 3.1cm x 4.4cm. To make the I shape, I cut in 0.8cm slots at 1.1cm and 2.9cm. However I recommend you use these as guidelines rather than gospel. Measure carefully and prepare to trim.

The thicker plasticard works wonders but there is one more improvement I’d make. If I had a dremel, I would cut out a slot for rare earth magnets and utilise them for more support. I’d also measure properly,

The key part of the NSVs and their tabletop use is going to be their heavy weapons. Wanting the greatest selection, I picked up one of each and got to work. As I say in the last impressions piece, I was a little disappointed to see only one crew figure but paint jobs helped to fix that. I also think I maybe shouldn’t have mounted all the weapon on the taller mounts – it looks good when trying to get over the rack but it did lead to some odd positions on the Auto-Grenade Launcher and a really tall stand for the minigun. However, they do look really cool. In addition, the gun mounts also had a few stowage items to make them look used. 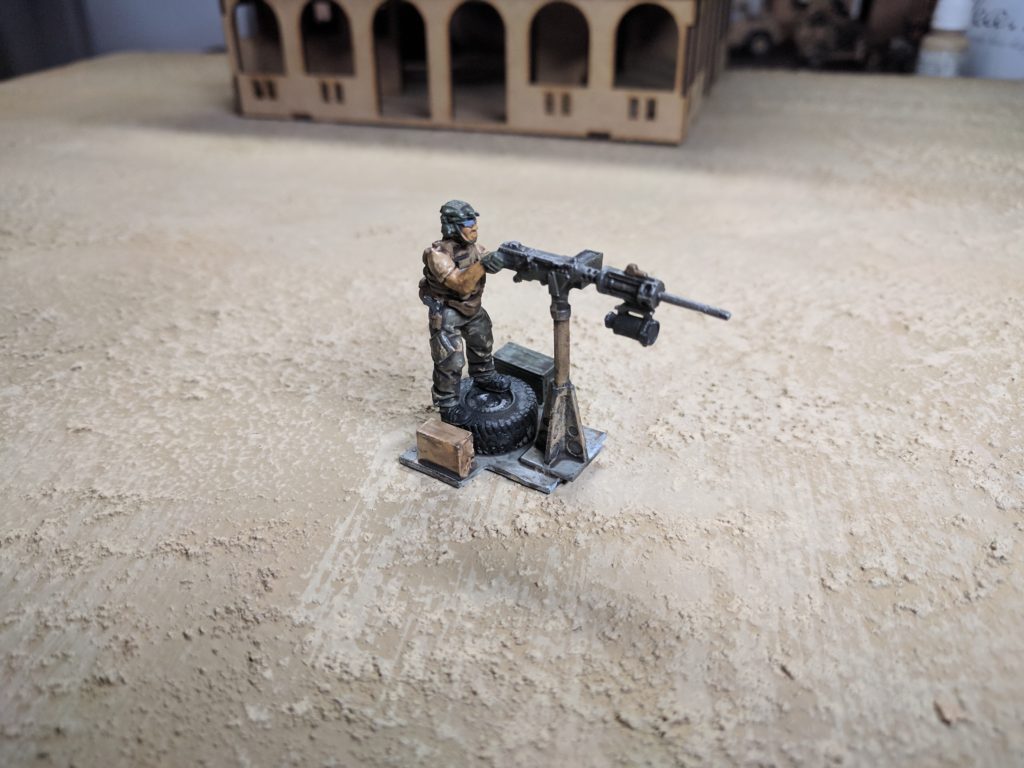 The classic M2 is back. Having proven it’s worth in its first outing in Bazistan, I’m really happy with this setup. One thing of note, the gunner was painted at speed and so he ended up wearing a version of my ACU camo. 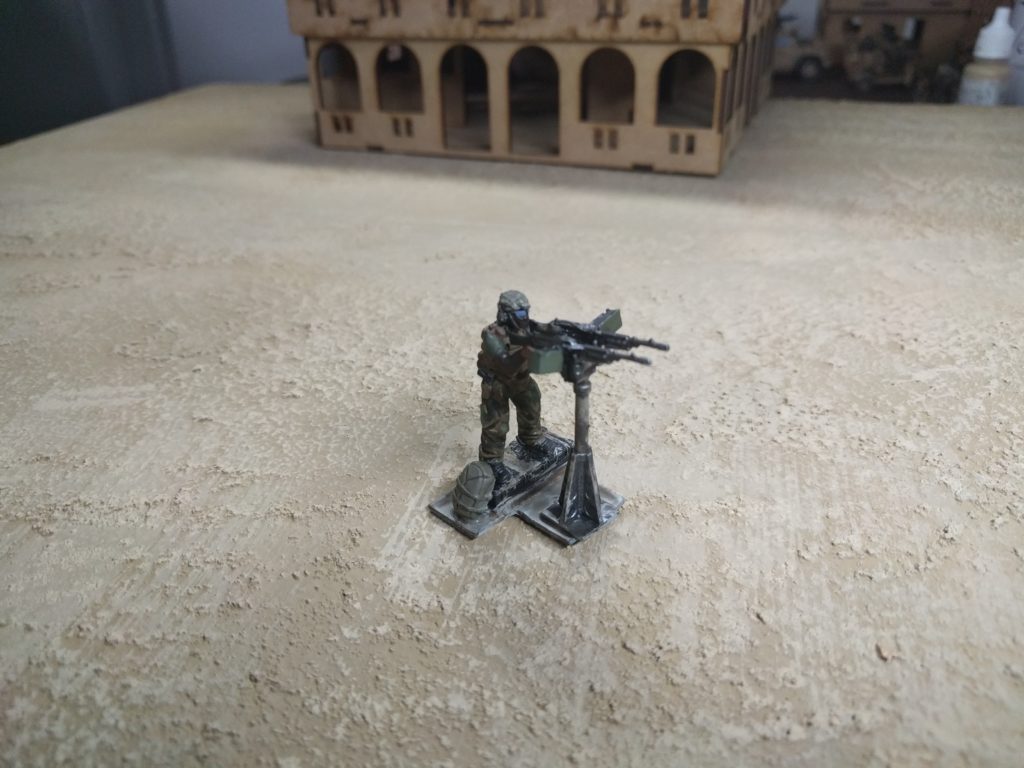 The most “more dakka” of the guns, I really enjoyed assembling this guy. I look forward to him speeding around the board hammering away. 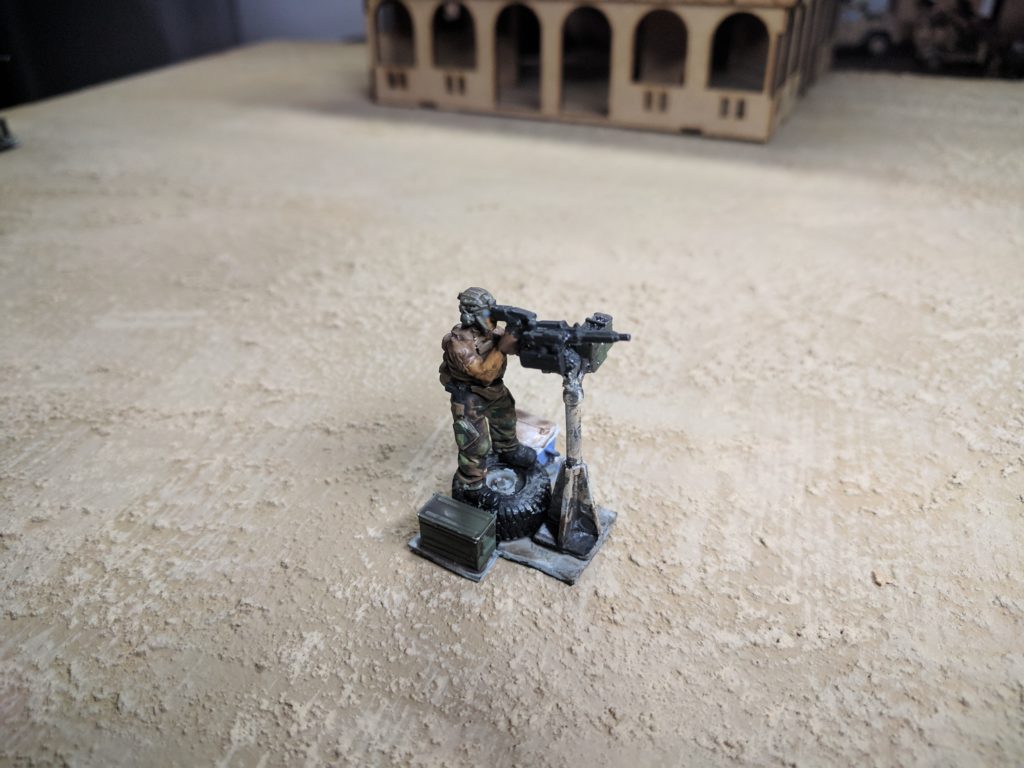 So this was the most troublesome to assembled. Due to the large height of the gun assembly and it’s two-part nature, I ended up with some support issue. To solve this, I had to glue the gunners face to the sight. It just about works but if I was to make it again I’d use the lower height stand and tilt the AGL more.

For the minigun, I decided to do something different. I decided to do some tweaks so I could use this setup for a gun truck alongside my Tier 1 Operator models. This required some Green stuff work on the gunner – trimming his helmet off, reforming the shape, adding a head strap for the headphones and then adding a bill on it. I ended up building the shape with a cutout in it to allow me to add the bill. Unfortunately, I only noticed the presence of my finger print on a bit of the putty once I started painting it.

As for the weapon itself, I would again swap out the tall mount for the lower one. It looks great on the technicals with the side panels on but it’s a bit spindly for all other vehicles. However, I am happy with my beginners attempt at conversion. 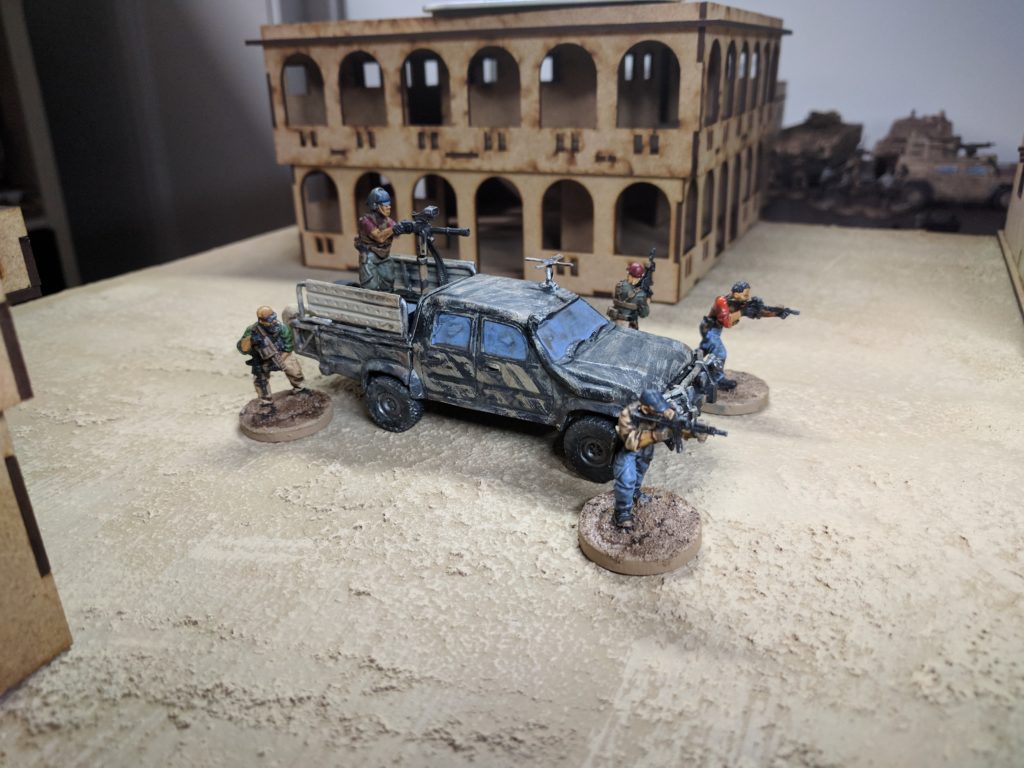 As you can see, it looks pretty good amongst the contractors. Hopefully it will give them a bit of a firepower boost when up against hordes of militia.

Now, that was all the guns that are available from the store. However, I had a few other pieces lying around which meant I could setup another weapon ready for use. I present, the GPMG. 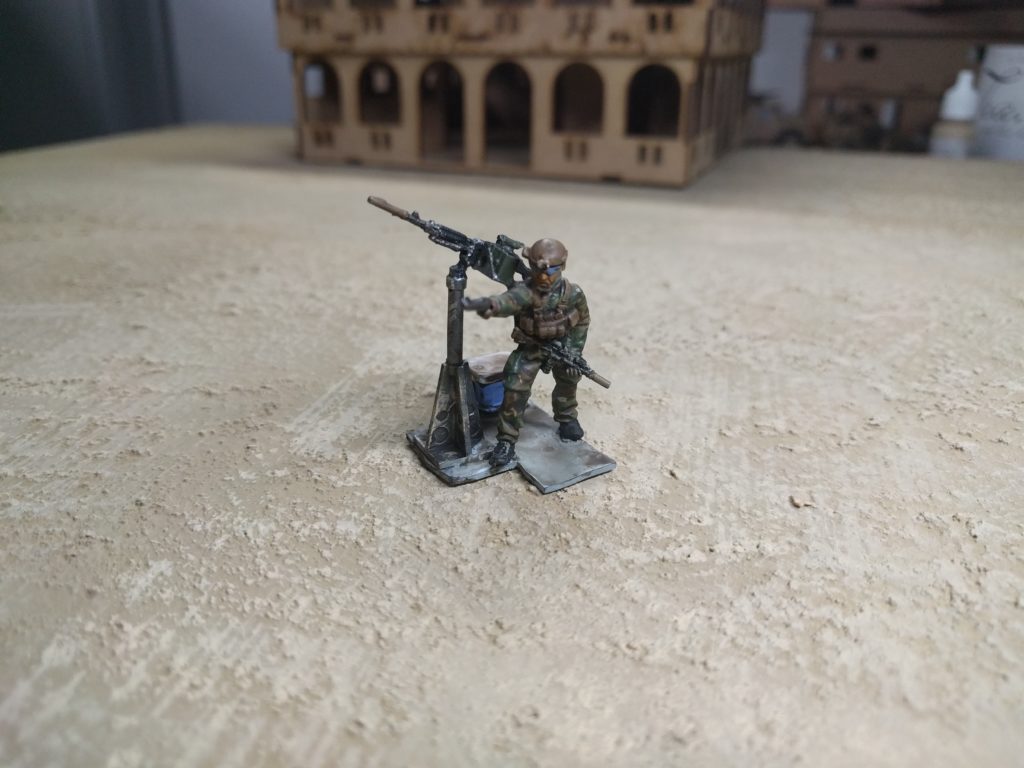 By pulling the spare mount from a (now Humvee mounted) minigun and a spare M240 from the razor kit, I was able to get a lighter weapon together. The only major issue was the crewman. Looking through the Task Force Operators range, I eventually found the cheapest option – the single figure using the pirate gun. Combining these two together set up a great tactical combination and a unique weapon for my operators.

In addition to the guns, the vehicles need a little extra stowage. This cargo is also great for mounting as an objective. The idea was also to make some that didn’t scream “SF OPERATORS HERE” so they can be used by the insurgents as well. 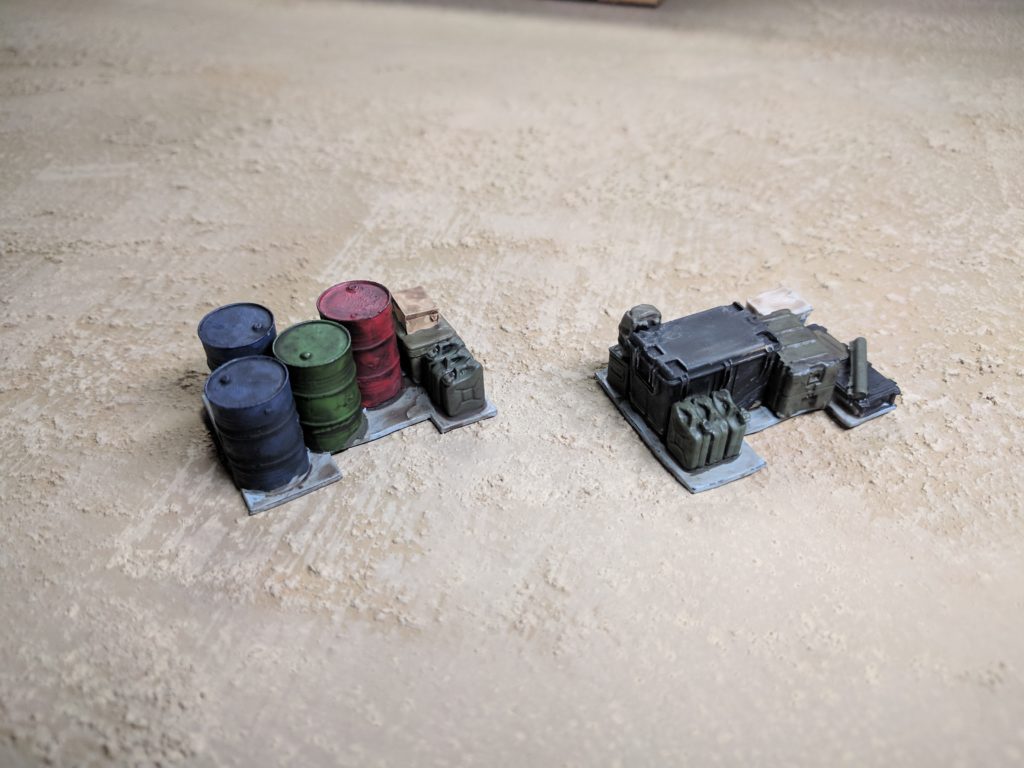 There are two full size cargos. These only fit into Technical Alpha. 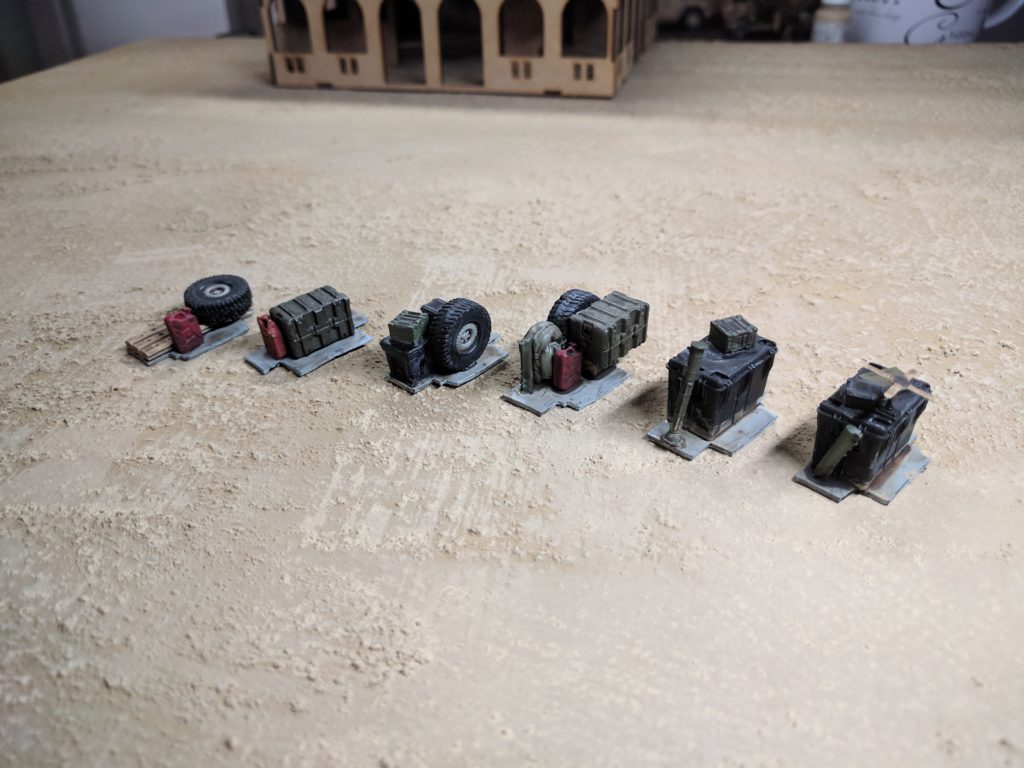 There are six half-size cargos. These fit into both vehicles, filling the bay on Bravo and adding more detail to Alpha. These are perfect for mounting alongside a weapon system in Alpha, helping to fill in the empty gap 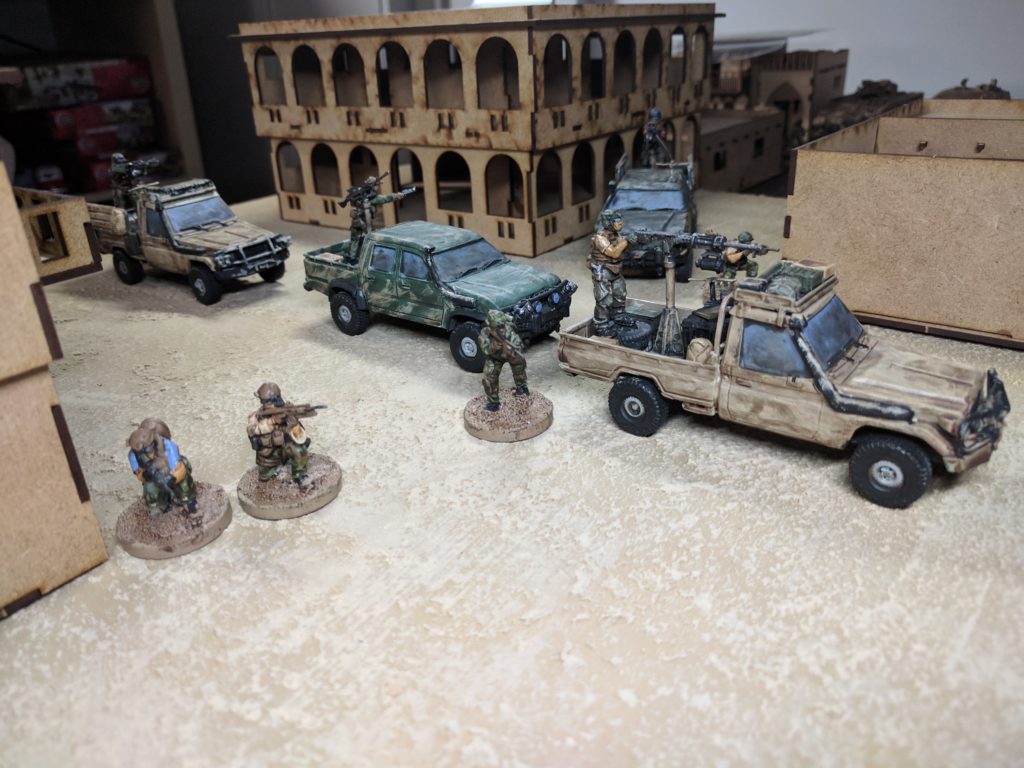 The NSVs help to bring some new to the SF side. A bit more powerful than the Razors yet still ready to race around at full speed to deploy at the right location, the technicals are also a great way to personalise your force. I really recommend doing a little planning before buying in, picking out the right packs of stowage and guns.

The next step? Getting all of these vehicles into a game.