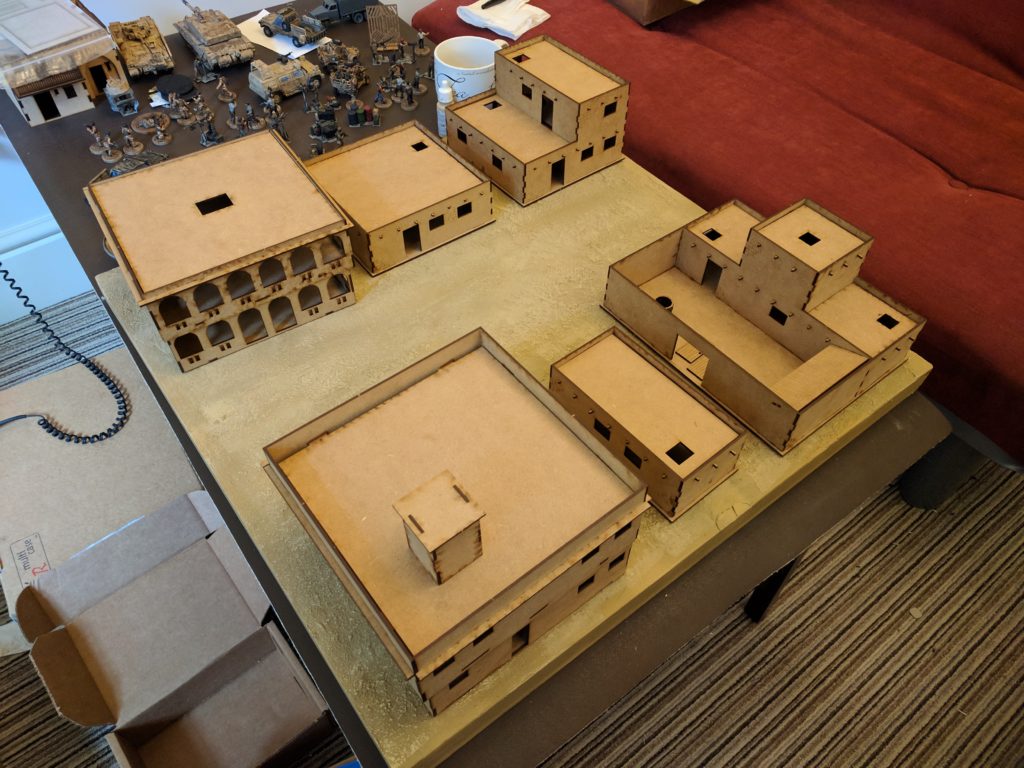 You may have noticed some MDF buildings lurking in the background of many of my impressions pieces. I’ve had some comments on them and so this reminded me I really should get my impressions up before they get ruined by my slap-dash painting style.

I picked up these buildings after bouncing a long chain of emails between myself and Mick at REDvectors. I’d seen some images of some 20mm buildings (including a version of the target building in Blackhawk Down and the Abbottabad target building) and was blown away by the style and quality of them. I fired him an email, had come great chats about getting some buildings and then Salute happened. A few months later, Mick sent me some details on a really cool set that he was working on. After a payday I sent off the cash and then a box of MDF appeared on my desk at work.

First things first, REDvectors has some great customer support. Quick responses via email, the package was really well secured and when I realised I had a miscut piece the replacement was in the post the following day. All really impressive from a one man operation.

Right, that’s enough intro, let’s take a look at the actual buildings. The pack included 6 buildings in a range of styles. Scalewise, the doors and windows are perfectly to scale with Empress and Spectre figures. The image below shows the Empress US SF figure next to two of the buildings. 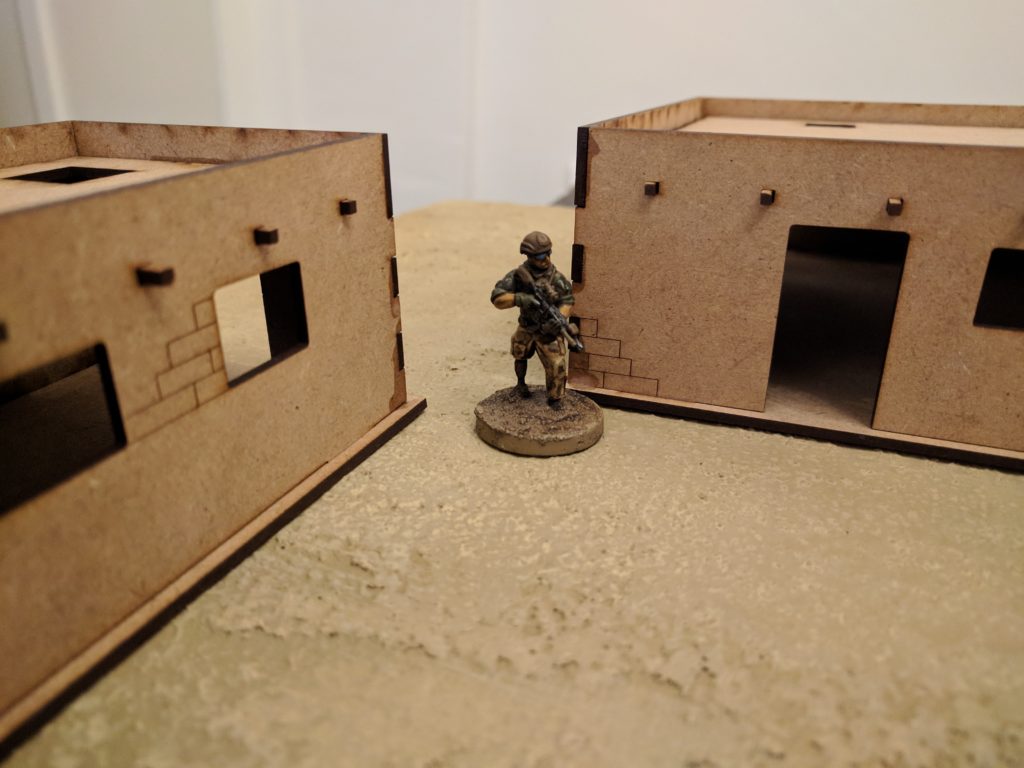 The MDF is beautifully cut with no fitting issues. Even better, the buildings came precut so there was no need to cut the pieces out of any sort of frame. As always, do a dry run first as a quick test.

The first set of buildings are the simple, 1 room classic adobe style. Both buildings have two door ways and plenty of firing positions. 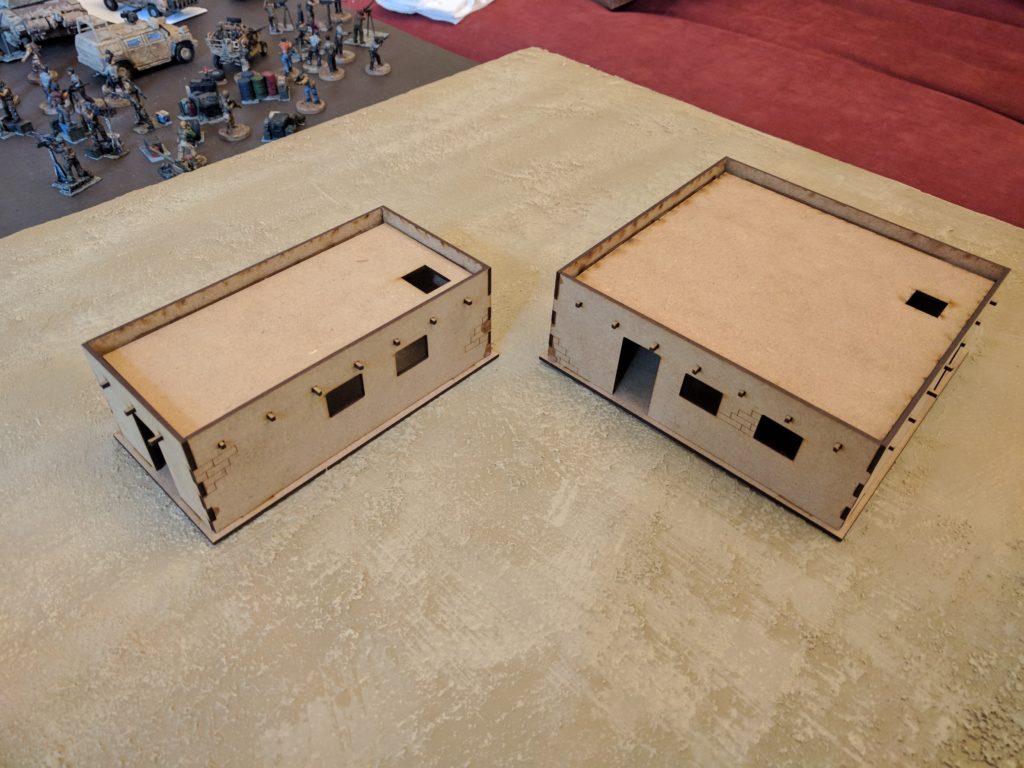 As common to all the buildings in this set, the roofs are removable and with solid floors. 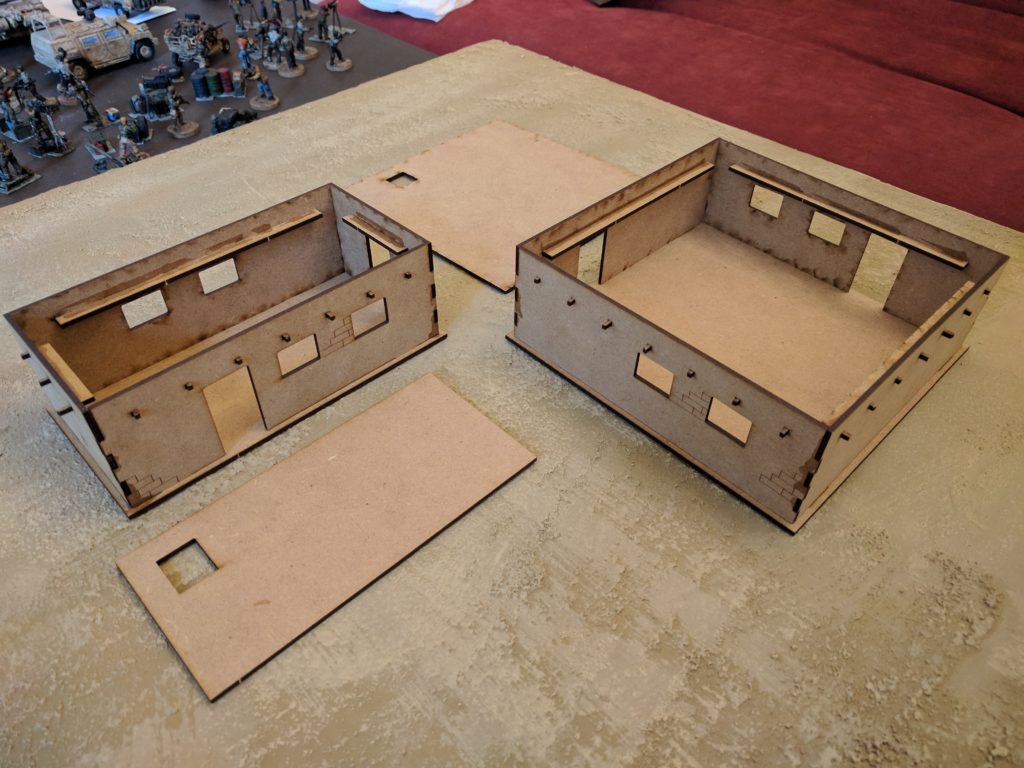 The next style of building is this two storey building. Two doorways on the ground floor and another on the first floor. 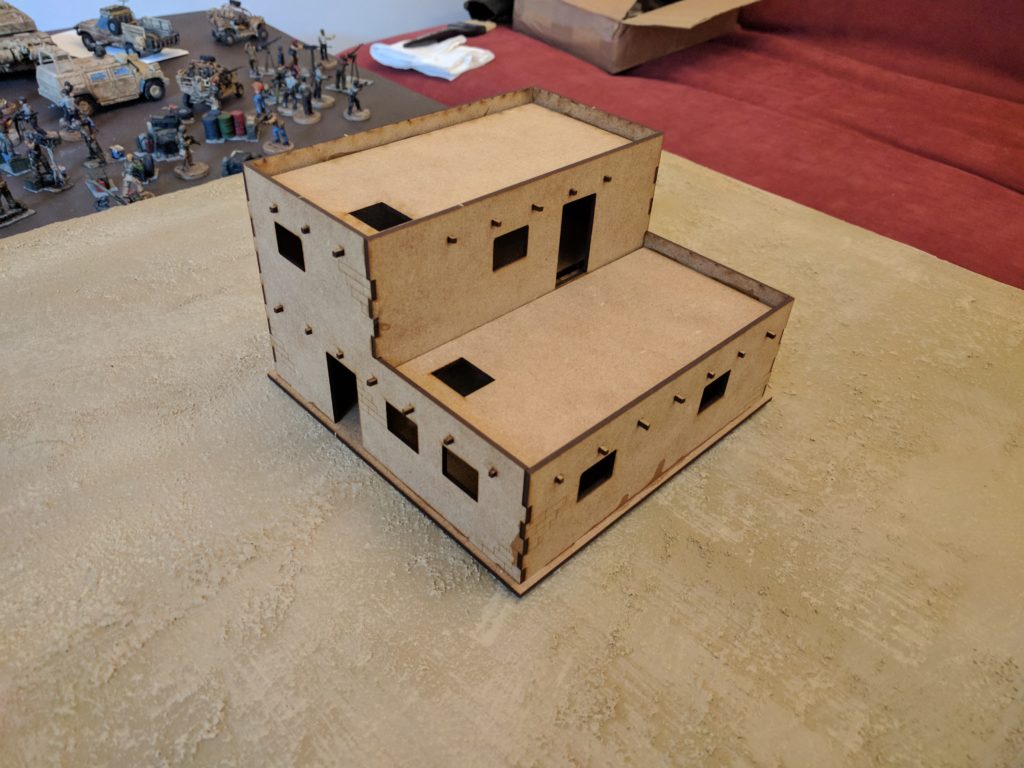 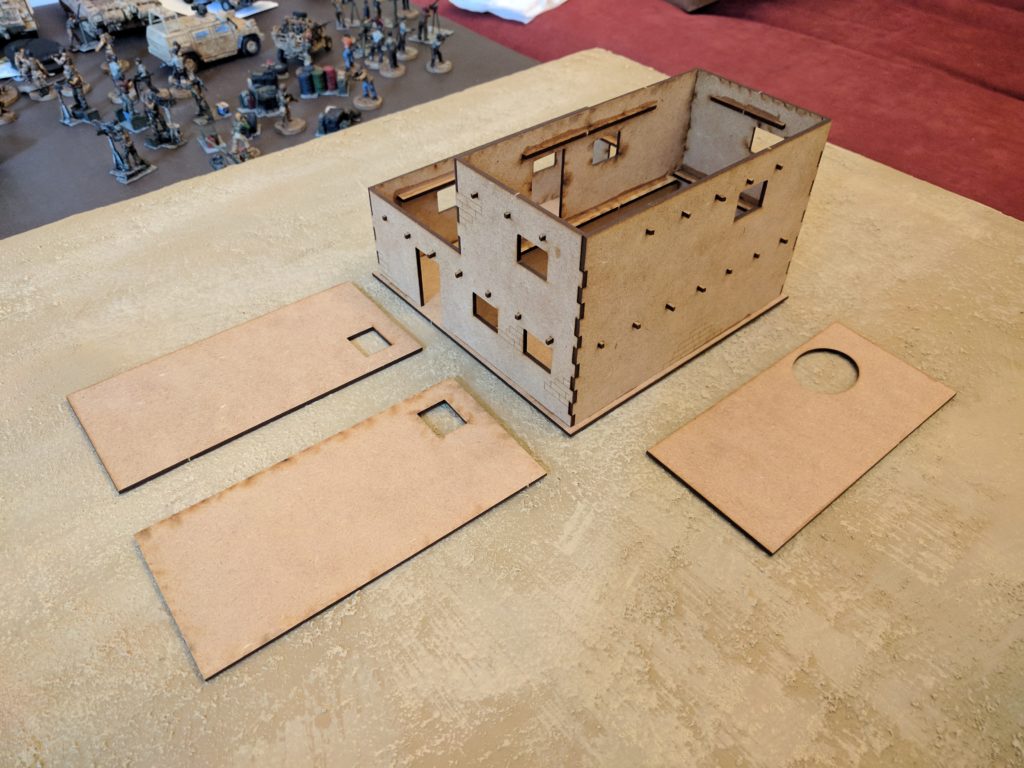 The last of the adobe style buildings is this small compound. It includes a small covered area, three small rooms, a well and two door pieces (currently unassembled). The well is made up of multiple rings of MDF that easily go together (don’t do what I did and use superglue unless you like to live dangerously). 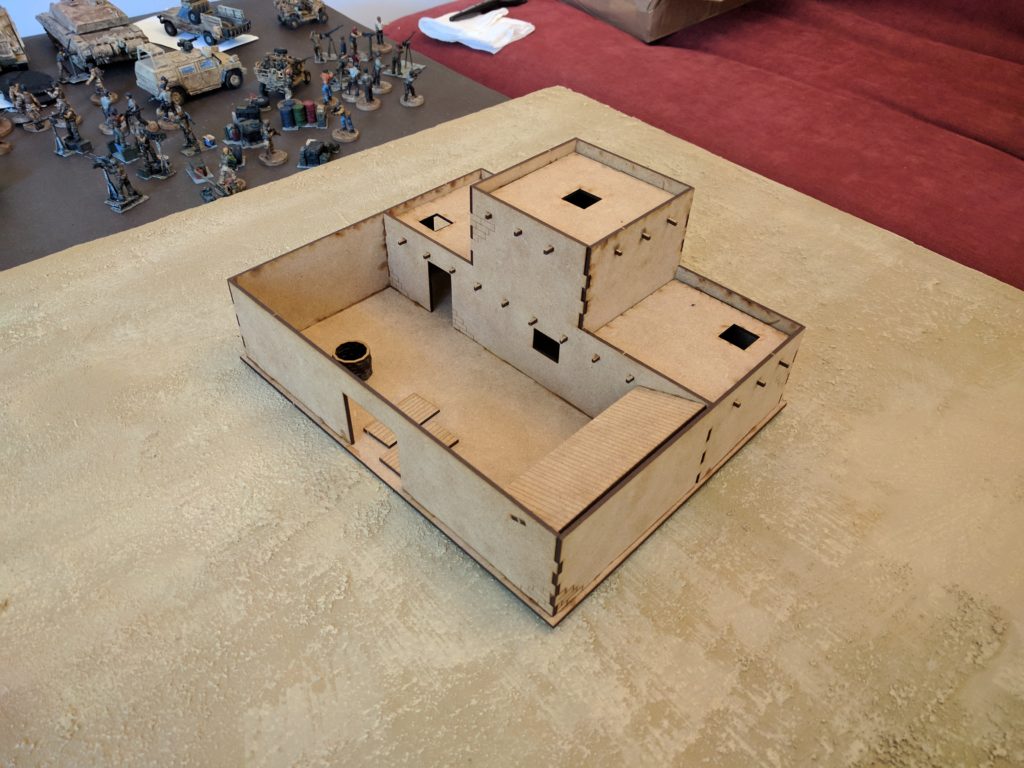 So I simultaneously love this building and can see a few issues with it. Two of the interior rooms don’t seem to have any access point for them. In 90% of cases, this won’t cause any issues. However, if a close quarter battle takes places, some abstraction might occur. That said, I didn’t notice this issue despite having the buildings for a month or so and it won’t take much to knock a hole or two in the walls. Alternatively, roof hatches and ladders allow access. On the other hand, there are plenty of cool things – the two storey tower with window should provide some interesting tactical issues. 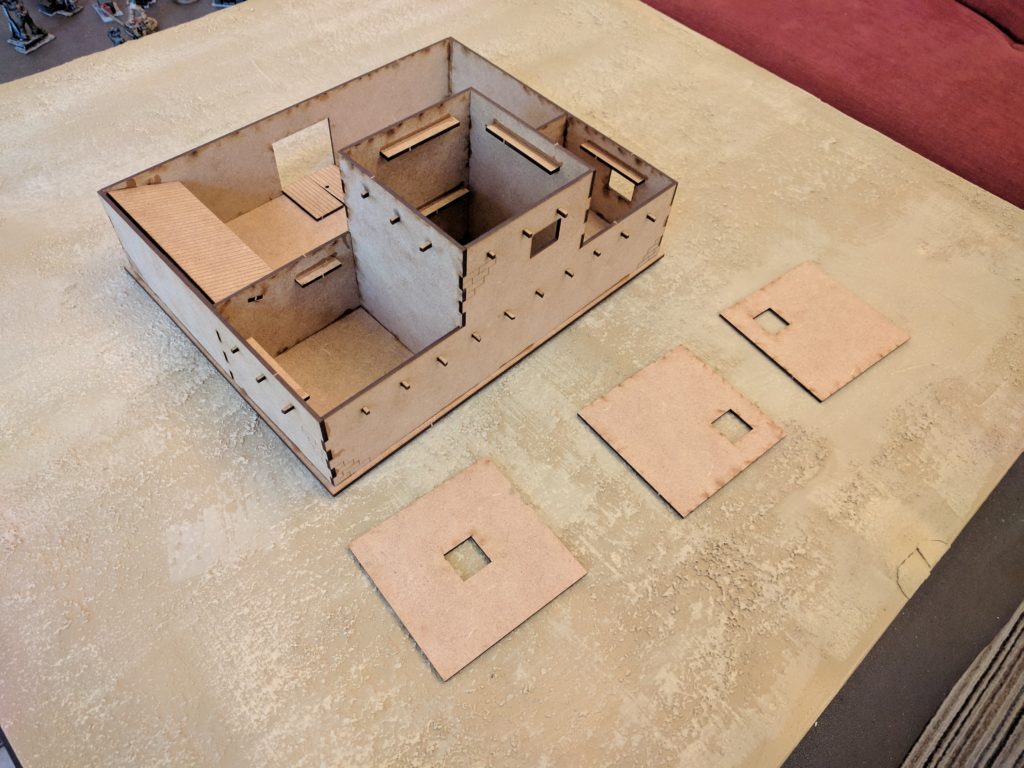 So we now come to my favourite two buildings in the pack. These are of a style we haven’t seen much elsewhere, more suited for an urban environment without becoming something that dominates the entire board with one building. I’m really excited about the idea of seeing more of these buildings, letting you having something that looks like the Mog with ease.

The first building has a balcony (that fits figures on 26mm bases) and a rooftop shack/staircase cover. There are no visible access points between the floors so some abstraction may be needed. 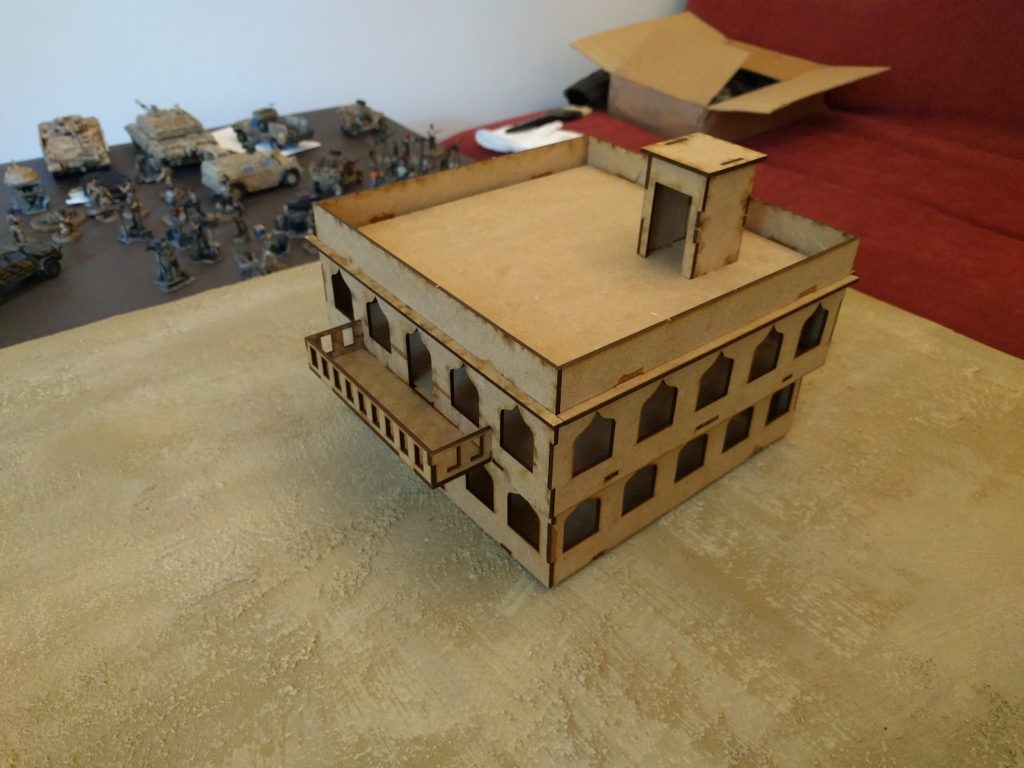 The more eagle-eyed amongst you may have spotted the cutouts on the rim around the top of the building. This was not a design issue but some user error. The tabs used to rest the roof on do fit together in a specific way. So dry fit and then dry fit again! 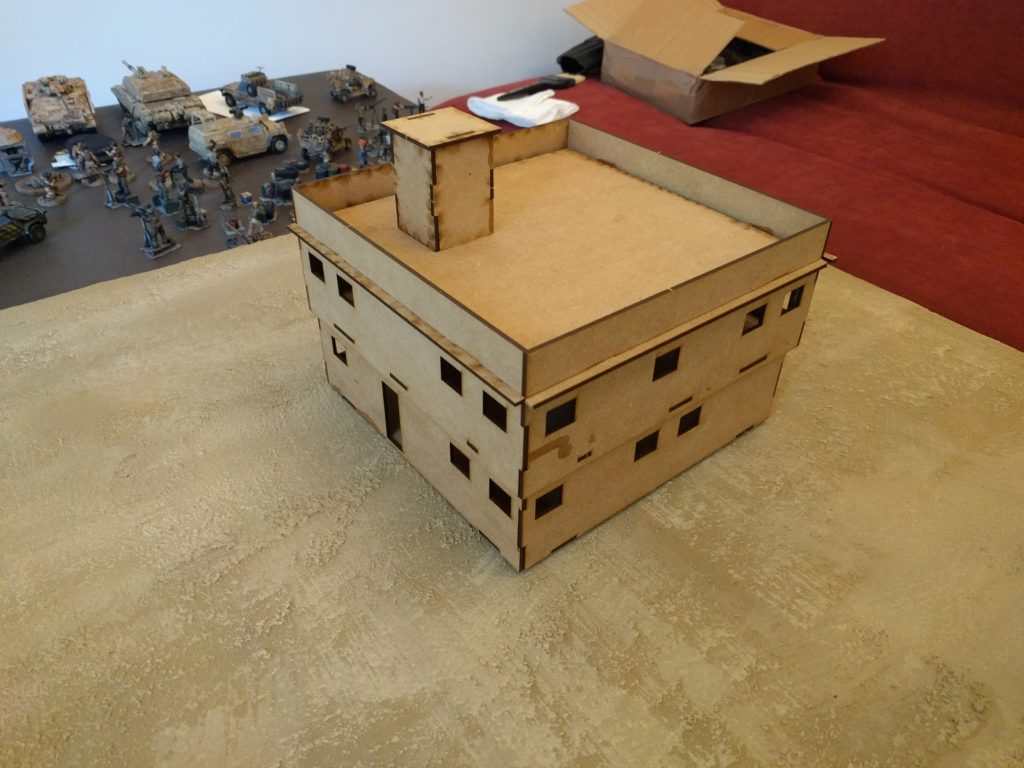 Pulling the building to pieces reveals plenty of interior space. No interior walls gives you lots of room to set it up how you want. 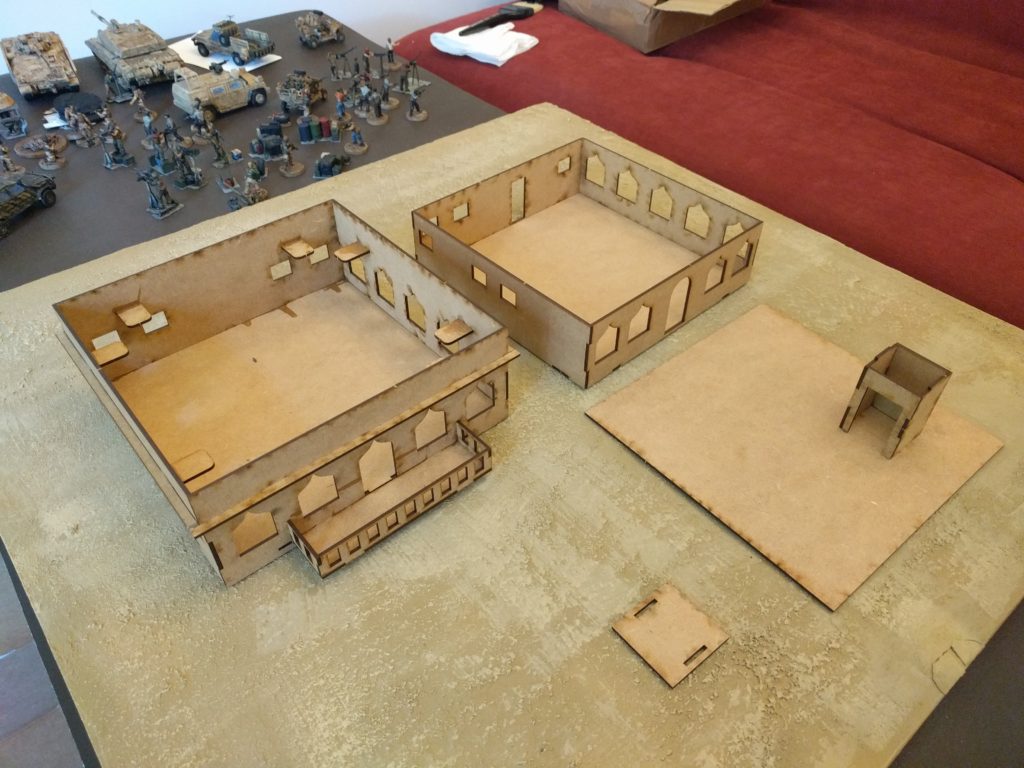 The second building is a similar size but with some different feature. The rooftop is entirely flat, making it a perfect spot for some helicopter insertion (I bet a little bird will fit on it solidly). The ground floor has several entry points and there are windows everywhere for shooting out of or diving through. 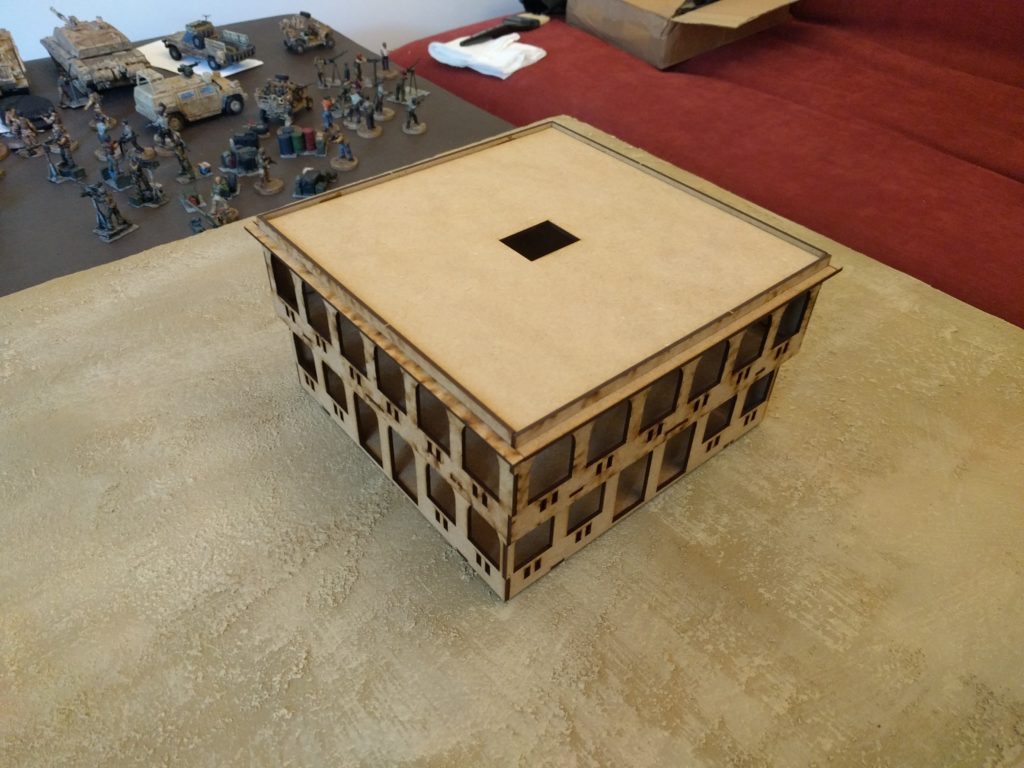 In this case I managed to set up the rim of the roof correctly due to careful planning and dry runs. 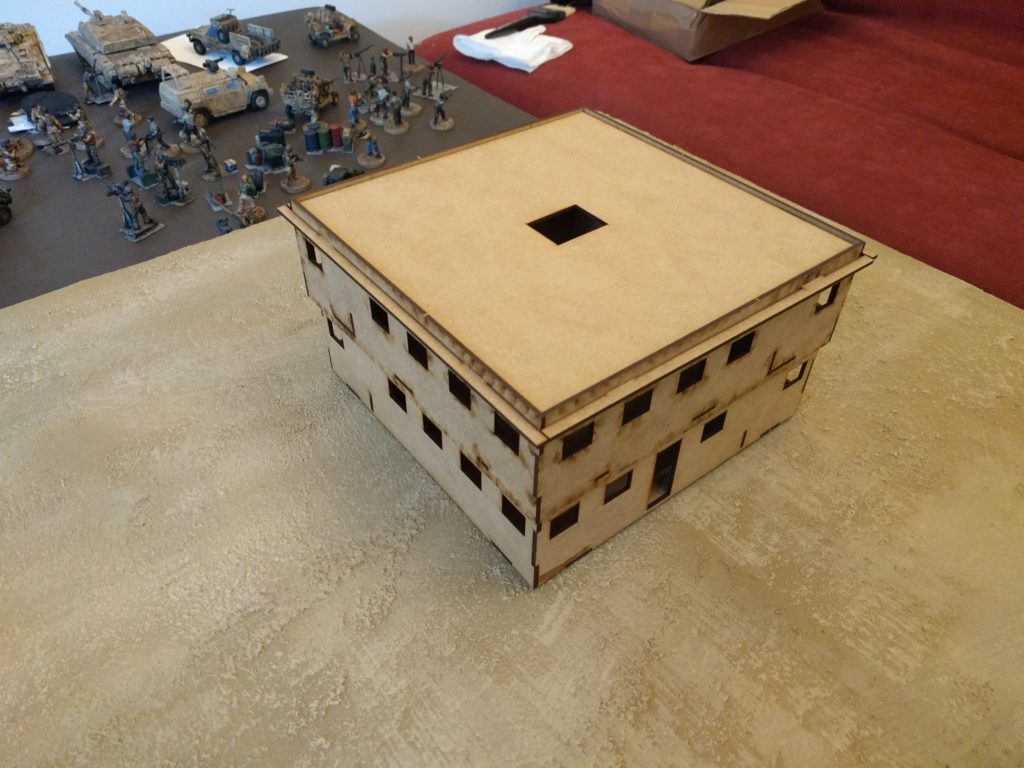 In addition, the building has some interior walls on both the top and floors, giving you one large room and a small corridor around it. Again, no interior staircases might be a turnoff for some people but having more playable space makes a lot of sense. 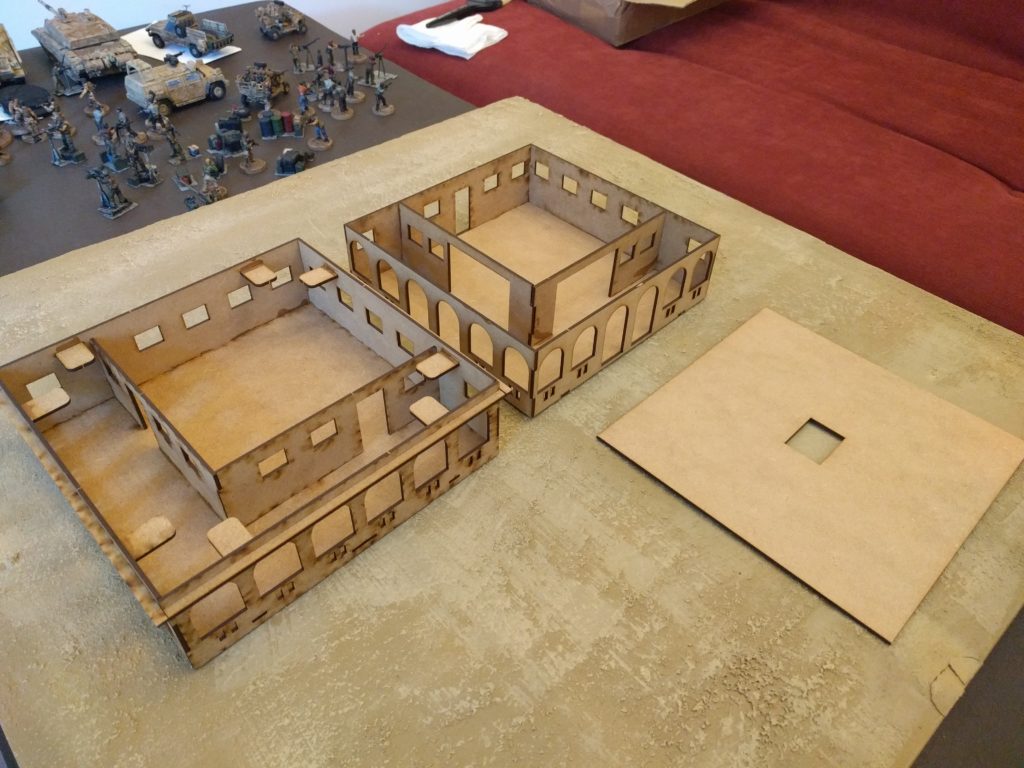 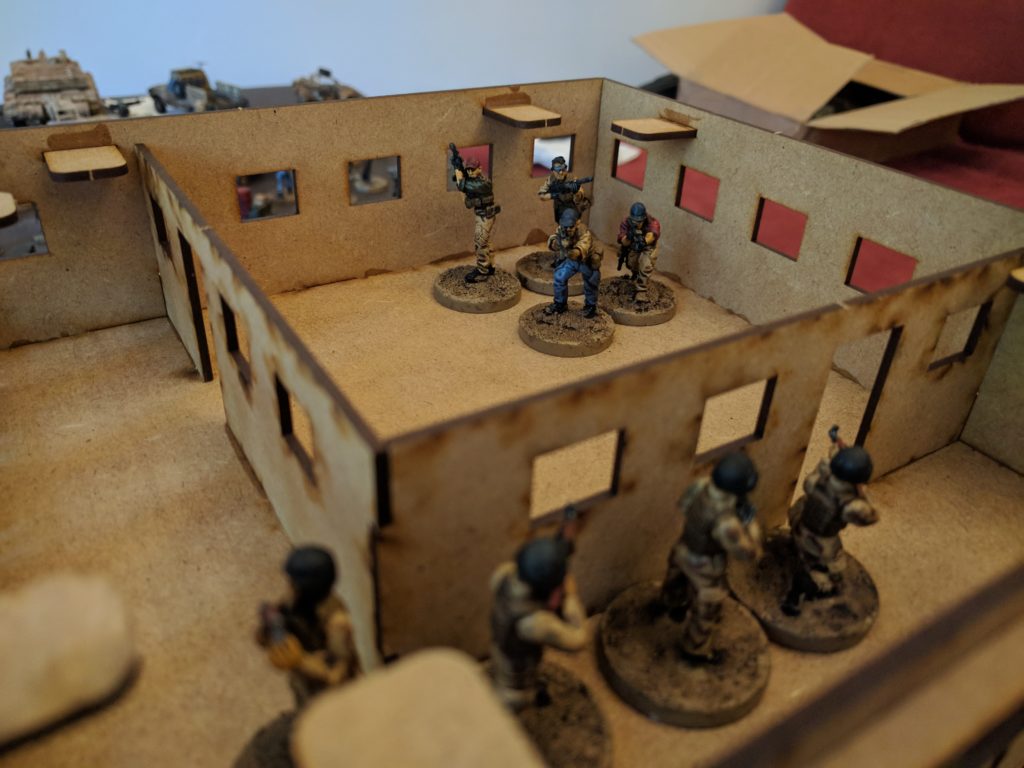 Overall, I’m really happy with this set. It was very reasonably priced (I paid £45 including first class postage) for some very nice quality (and playable) buildings and it’s really likely I’ll be trying to get some buildings from him. I might even try to commission a few things.

If you are interested in a set of these, the best way to get your hands on them is to get in contact with Mick at REDvectors via the Contact page (http://www.redvectors.co.uk/contact.php). Some of his stuff is also being sold via Minibits, both on their website and at several shows in the UK. You can also check out their facebook page at https://www.facebook.com/redvectorsuk/.