As you may have seen based on the posts, I really like Spectre Miniatures. They make a great set of rules and make some of the coolest figures available to the modern gamer.

Another thing that particularly good about them is how often they post up some previews and show the world what is coming out, fresh from the workbench. Most of these previewed products are released soon after they are shown but amongst them there are a few figures hiding out, biding their time. In this post, we’re going to take a quick look at some of these. The main rule when choosing these early looks is to focus on the physical previews rather than the occasional renders – seeing things in the flesh is always better than a render and are more likely to be released due to the extra amount of work that has been put into them.

Going back to October 2015, we have these three operators. They are wielding some pimped out rifles, complete with thermal optics and other attachments. Based on appearances they seem to be SIG MCXs, similar to those used by the Tier 1 operators. Looking at clothing, they are very similar to the Deniable Ops or Agents ranges, although the silenced pistols make me lean more towards the Agents, as the marksmen in that range are also equipped with them.

The African militia are among the oldest figures in the Spectre range, with all of them from the original Kickstarter. They are still fantastic models but you can really see the difference in detail and style between the Africans and the more recent releases. However, the Spectre Instagram showed off some WIP models of some new fighters ready to join the militia. This one is wielding an AK and a revolver, marking him out as someone of standing, ideal to be a squad or gang leader. The pose is also much more animated than the older style of model. I’m really excited to see the rest of this release when it finally comes, especially as I have yet to purchase any of this range.

This requires a bit more of an eagle eye than the others. Before Salute 2016, this preview appeared showing off releases coming soon. Most have since come out (a mixture of criminals and vehicle crew) but there are two interesting figures – you can see both on the left side of the image. Both are armed with Steyr AUGs (one raised and one at rest) and wearing clothes similar to rest of the Criminal faction but we haven’t yet seen them on the store. This is a pretty cool gun to give to that group, especially if you’re wanting some slightly more professional criminals or just really like Die Hard. There is also two crew figures – one on the right side of image with a projectile and the other other crouching on the left.

A more recent preview, these three operators are pretty interesting and also show Spectre are about to go back and add more to some existing ranges.

The top figure looks like he is part of the Task Force Nomad collection, based on the combination of modern gear and traditional Middle Eastern clothing. His weapon, a bullpup Barrett, is also bang up to date and will add some nice long-range precision firepower to the squad.

Bottom left looks to be part of the Tier 1 Operators range (based on the baseball cap and fast mag pouches). The pose is cool but even cooler is his gear. In one hand is a breaching tomahawk, ready to help out your tactical actions or give you an edge in close combat. In his other hand is a SIX12 modular shotgun with an optic. The flat frontend shows it is set up in suppressed format. The level of detail is great as you can even see the three M-LOK holes on it. In related news, I think this is my new favourite breacher figure.

The final guy looks like a Task Force Operator. The weapon is an Ultimax LMG, designed to give MG firepower in a package that handles like an assault rifle. He also has a rucksack on his back.

Much like with the African militia above, Spectre seems to also be revisiting our four-legged friends. Another figure from the original Kickstarter, the dogs were nicely detailed but also pretty static. This updated figure is much more dynamic, looking like he is moving alongside his master.

You can actually see part of his handler. Based on the fast mag holders and the pelvis plate, he is going to be some form of operator although I’m not 100% on which group – some of the detail looks very similar to a new collection that Spectre have been teasing in the past few days.

New SAS! From talking to the guys at Spectre, they are really excited about this release having really done the research on what gear is in use. They have all sorts of really cool equipment – some of it close to the Task Force Operators but there are plenty of UKSF specific items. I am particularly excited for the guys in SOTR breathing gear – perfect for CQB operations or (if you fancy a change) hunting zombies!

I am also interested in seeing how they will be released. Comments on the group seem to point to these guys being released in the new Squads packs (as seen with the insurgent killteam) with some specialist support characters sold in the normal blisters.

As well as figures, the Instagram also includes this picture of 3D printed weapons we can investigate for hints. Spectre’s process is to use CAD tools to design the hard items (like helmets, fast mag pouches and guns), 3D print them and then add them to the greens before being cast as one part. The 3D sculpts are not sold separately so if they have been printed, good chance they are going on a figure.

So far, several of these weapons have been used:

So what’s left over that hasn’t yet been used? The mix of weapons are unusual, from the high-tech ACR and Scorpion Evo down to the original Scorpion and the M79, making me think we’ll see these items appear across multiple ranges. However, two pairs of weapons are particular interesting. Two Tavors (one standard and one X95) and two Type 97s might show us the arrival of two new SF teams from Israel and China. Of course, these weapons might not be in the hands of state actors so we could see some more heavily armed insurgents, like the pair with F2000s. As someone who used to own one for airsoft, I’m also looking forward to seeing who will be wielding the blooper.

All of these have come from the Spectre Instagram but there was an even better place to see some greens – Salute 2015! My first trip to Salute some me come away with this picture. It’s interesting to see just how much in the image has since been released and also how many haven’t seen the light of day. 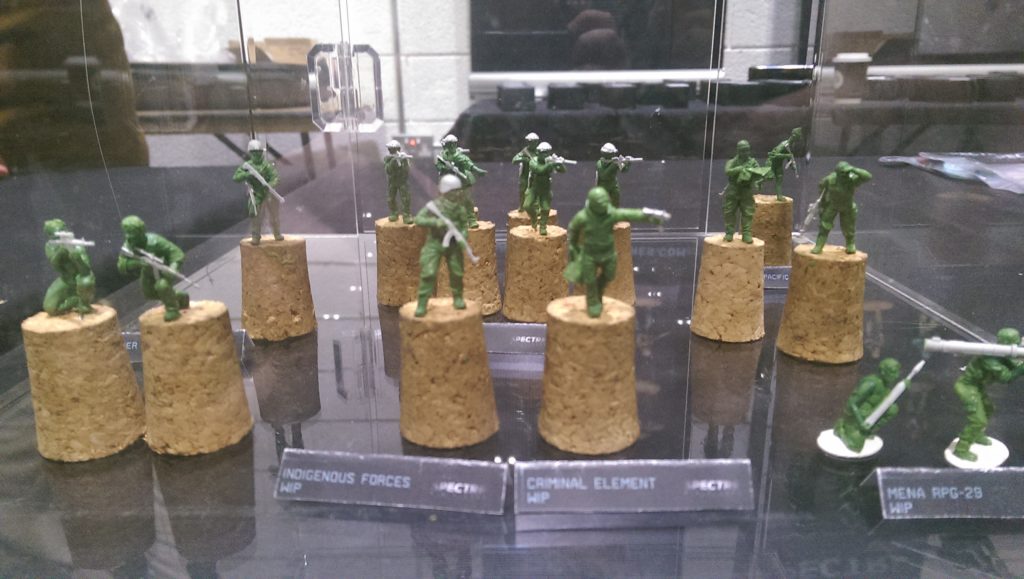 So, who came out and can be bought now?

Overall, a good number but there are still some guys left. Moving from left to right we have:

From talking to the guys at Spectre, it seems like they have releases and targets planned out for years to come. They also mentioned that anything shown on the Instagram is probably coming out in the future, they might just be delayed until a good group of figures are ready to be released together. As you can see from the list above, we’ll have plenty of goodies coming our way for years to come.

That said, there is one set of figures I’m still waiting for.