It was the last club night before Halloween – something slightly spooky was required. With freshly finished scenario in one hand, and freshly painted werewolves in the other, we sat down to play… Home of the Wolf!

The scenario saw 8 UKSF soldiers and a SIS agent going up against 3 werewolves. Thanks to the design of the scenario, I managed to fit two games of it in. 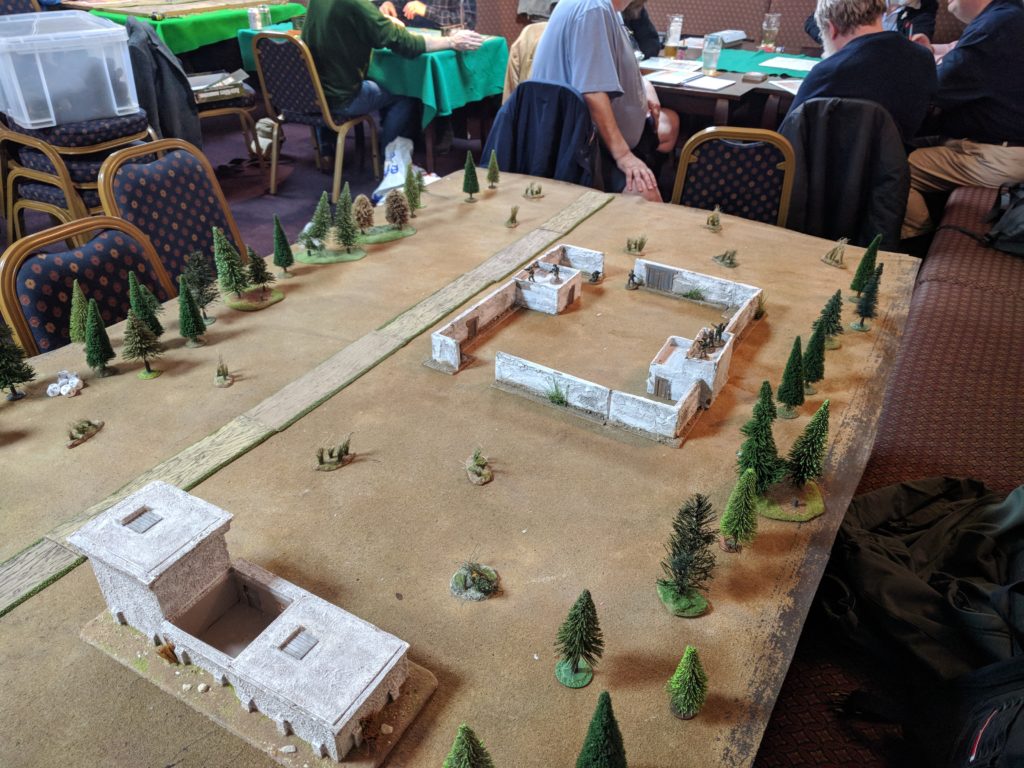 The board ready to play, with an abandoned compound in the middle of a forested valley. I think this was the most trees I’ve used in any of my wargames. 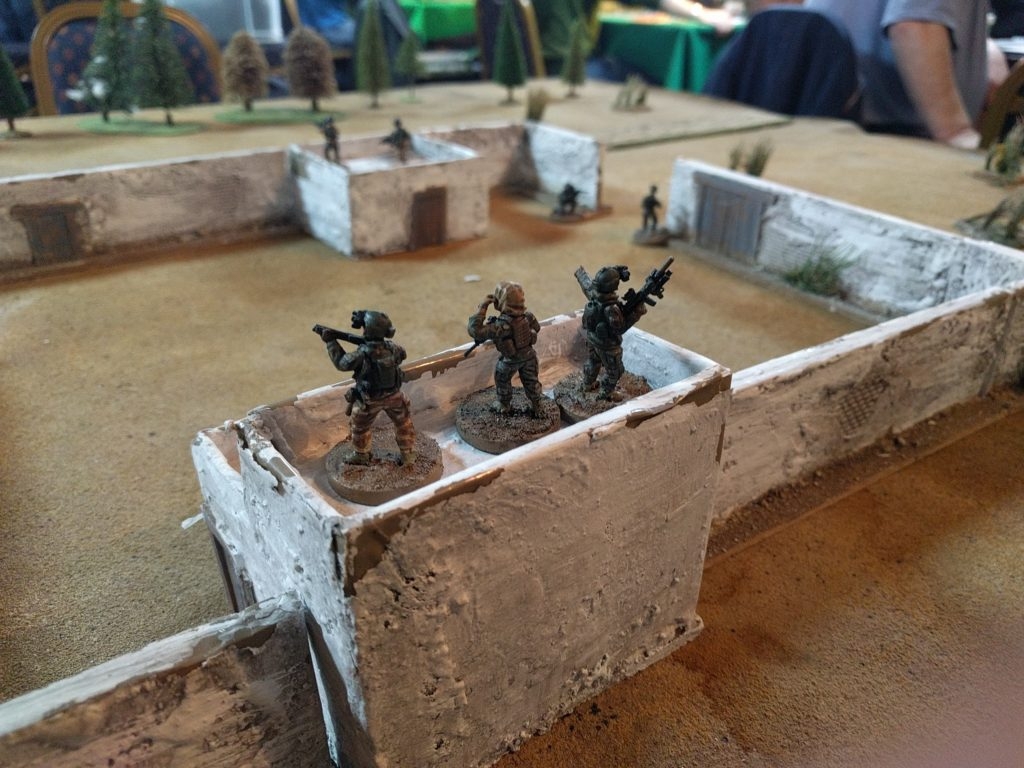 First game saw me taking control of the werewolves. The SAS setup throughout the central compound, in particular taking the high ground. 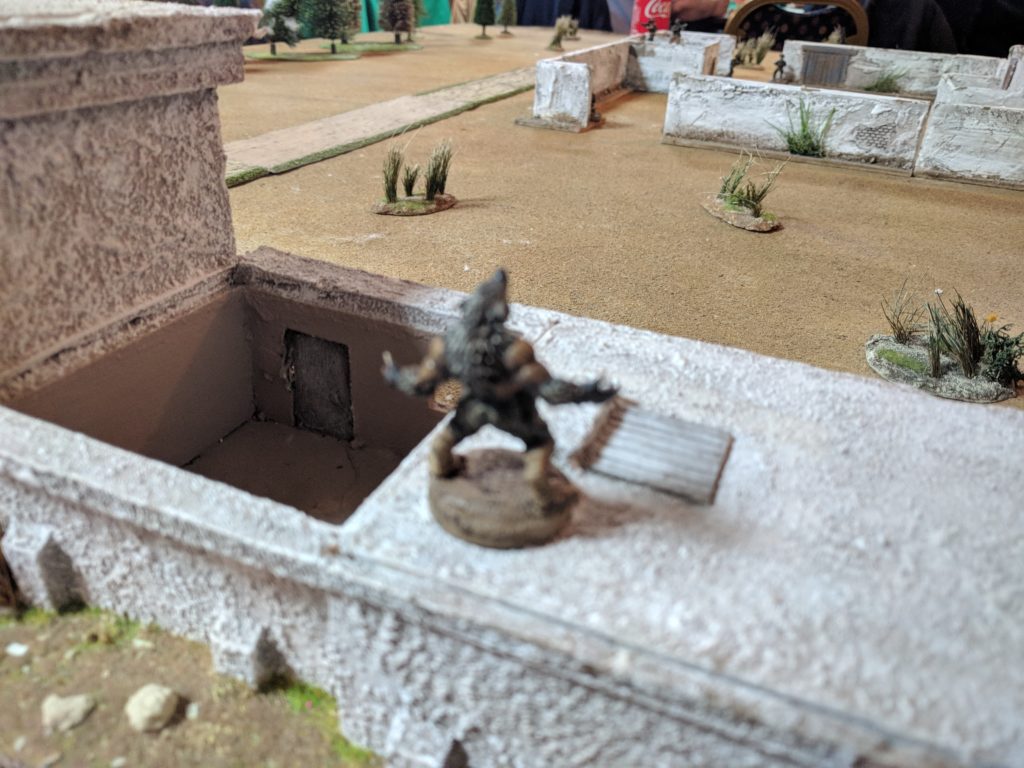 Slightly blurry shot, but it isn’t a werewolf film without a shot of one howling to the moon. I went for a scatter approach, probing for a thin point and then using my superior speed to mass suddenly at that position. 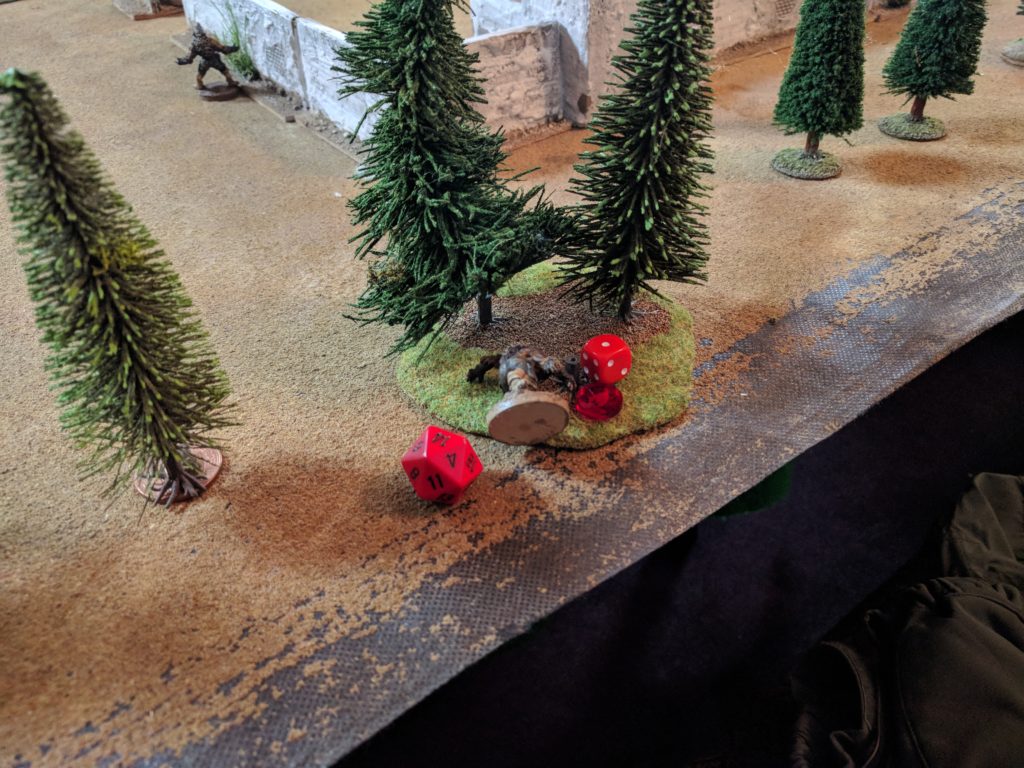 The start of the game didn’t exactly go my way. Werewolf number 3 was shot before he even activated, having been spotted early on and shot down by the combined gun fire of two Operators (including the SIS agent). 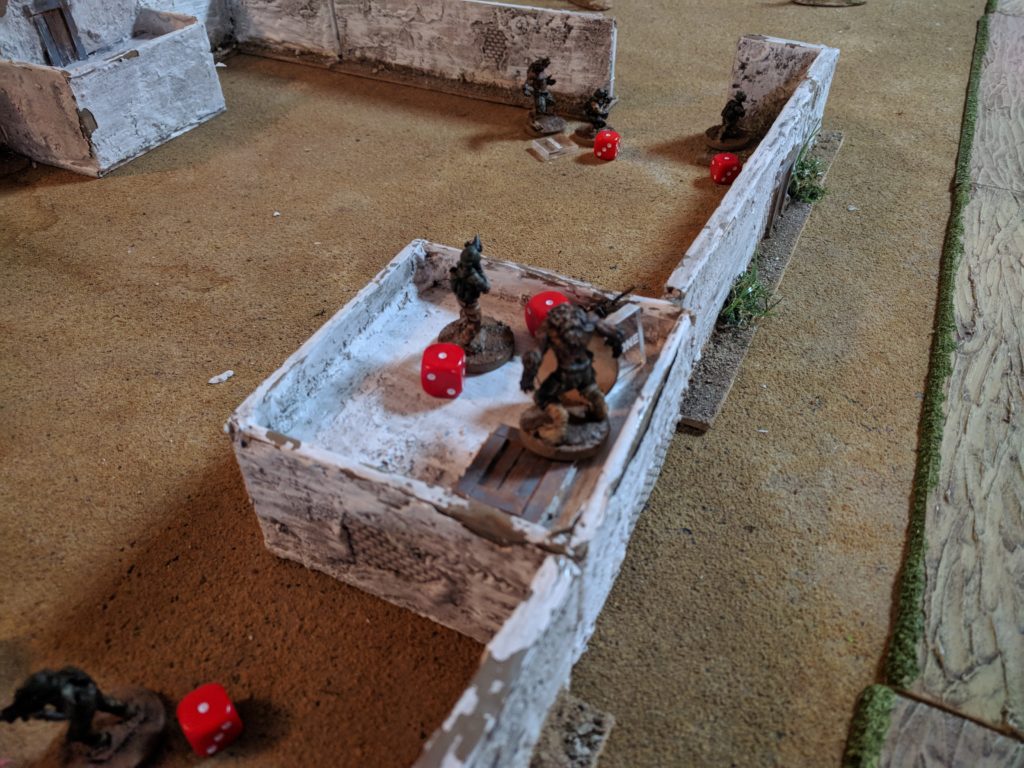 Werewolf number 2 ran straight into the two-man combination of shotgun/LMG trooper, leapt on top of the gunner and ripped him to pieces sending morale markers everywhere. Werewolf kills generate additional morale effects so even the elite and veterans were suffering morale failures. 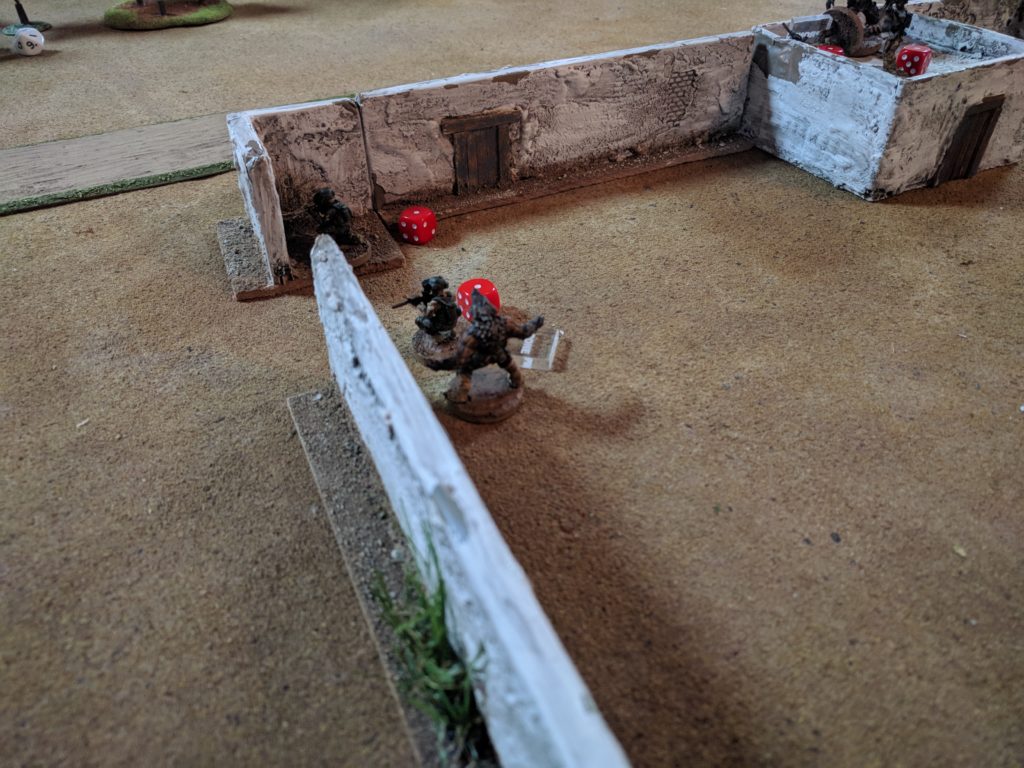 Meanwhile the Alpha bounded over the wall and engaged one of the operators covering the front. Luckily for the trooper, he managed to parry the werewolf’s furious strikes.

I must have missed the photo but the two-man killing team that took out Werewolf 3 slewed round and finished off the alpha as well. About 4 phases in and I was down to 1/3 of my force. 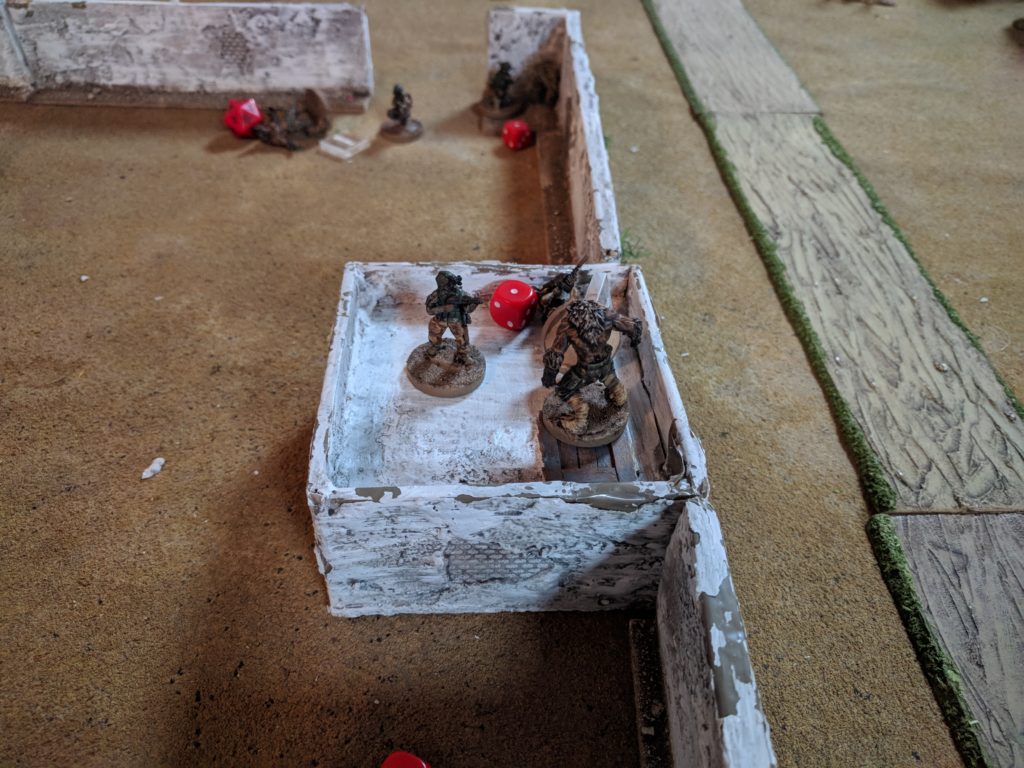 Back on the rooftop, the shotgun trooper now stared down the last werewolf. Before it could leap forward he took aim and pulled the trigger. And…. 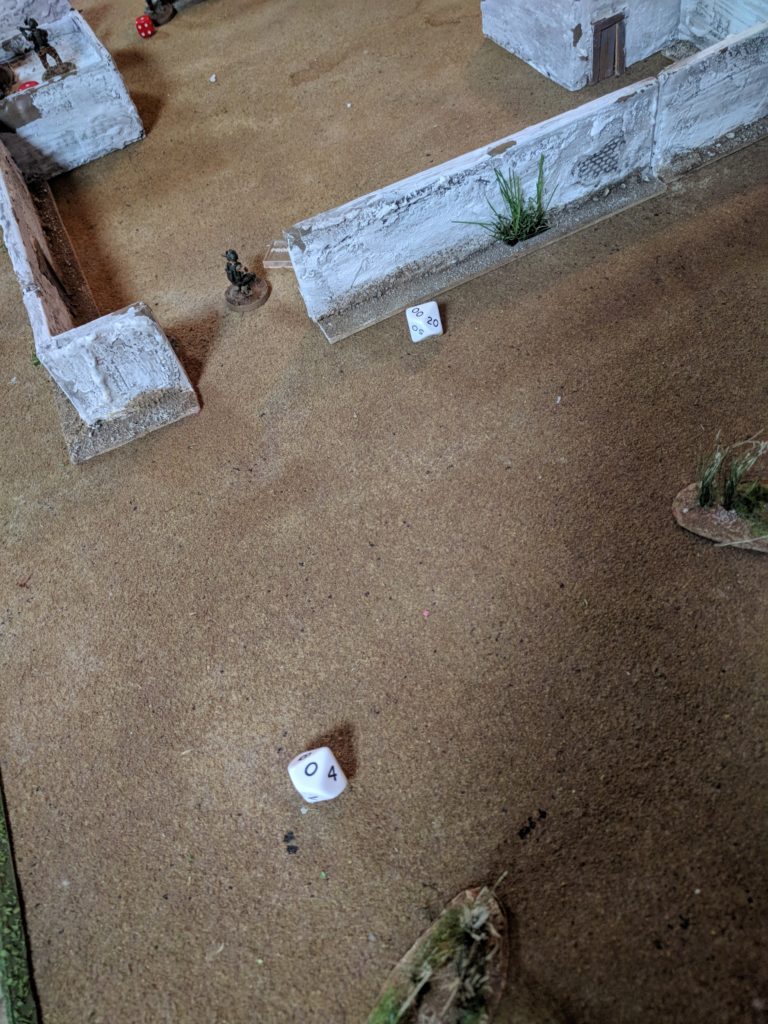 Rolled a misfire. The shotgun jammed and now required 3AP to clear it. 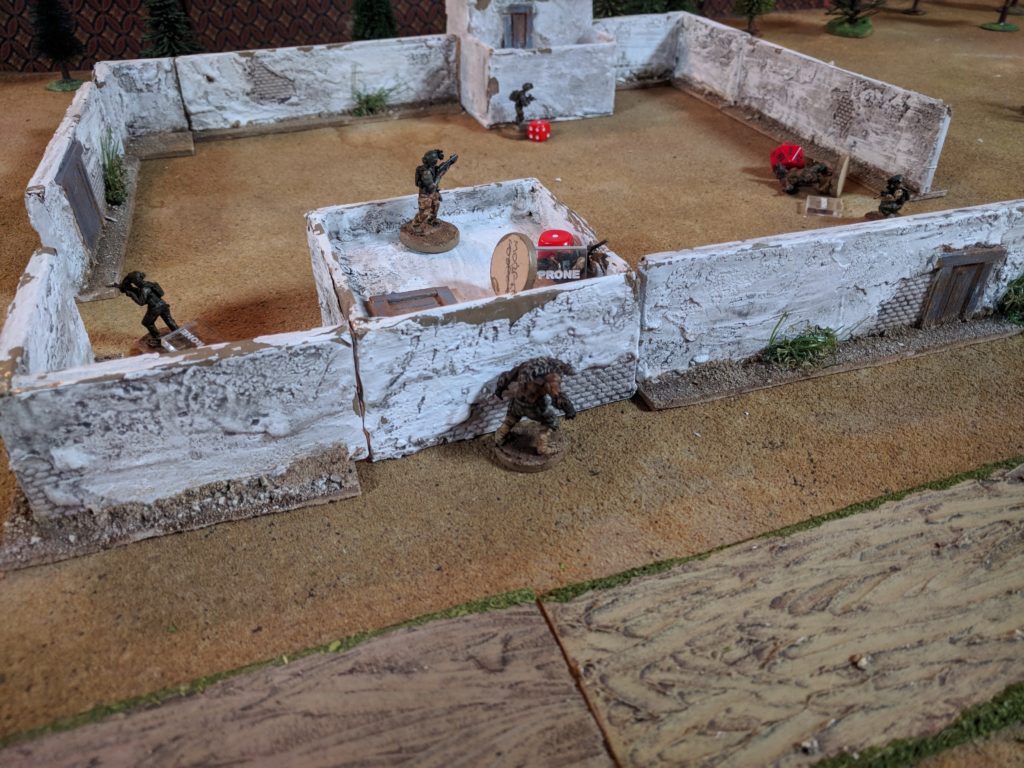 The last wolf leapt off the roof and went running for some concealment. Maybe another ambush would help it get its prey. 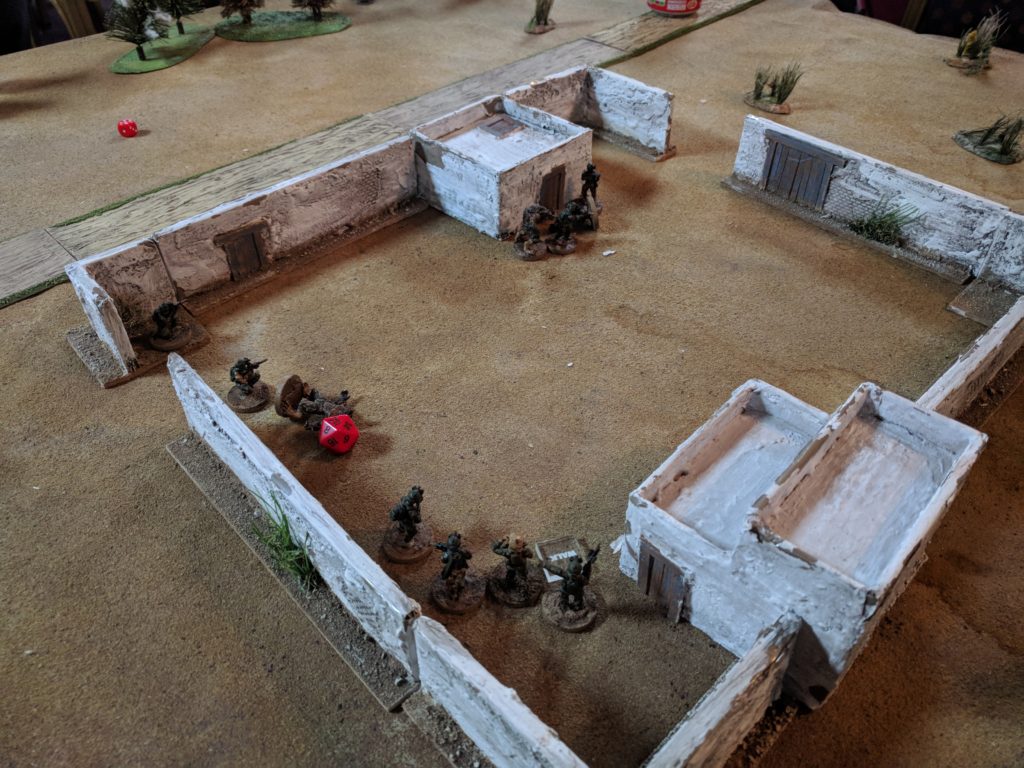 After having watched the operators move to regroup, the wolf jumped in to take out another operator but got hit by the mother of all snapfires. Everyone in the arc opened up. However, the wolf managed to take the storm of bullets before slashing it’s target down and then sprinting away into the darkness. 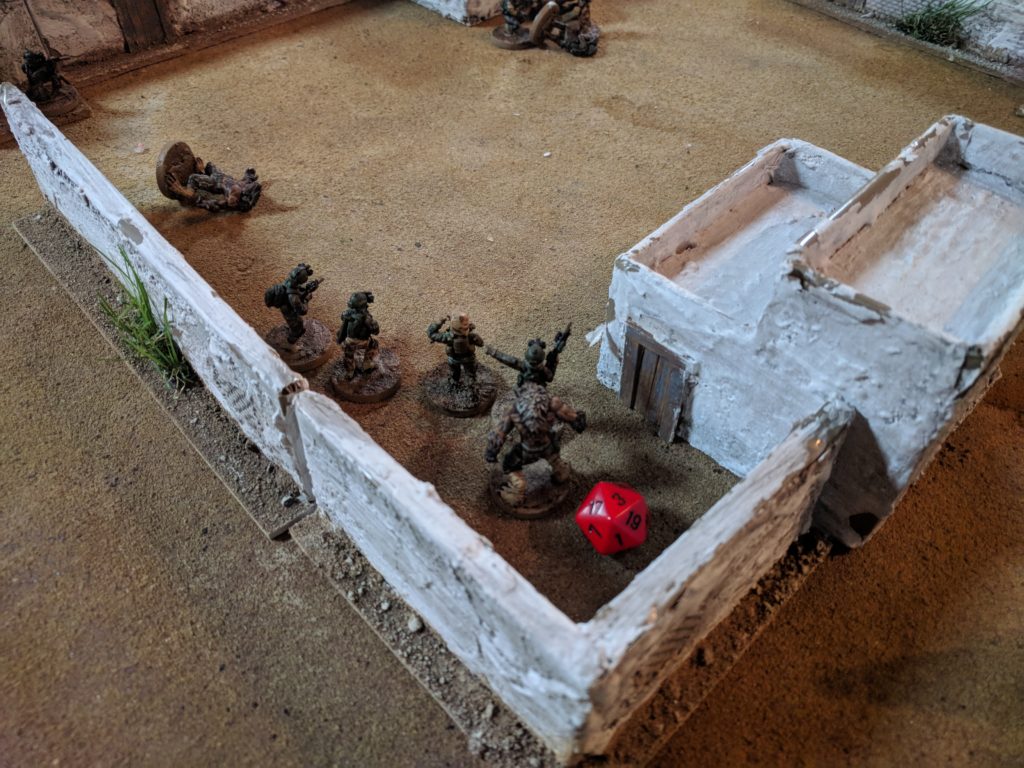 As the wolf player, I was running out of options. So I went for a hail mary – moving round the compound, leaping over the wall and then trying to get some stealth kills by sneaking up behind 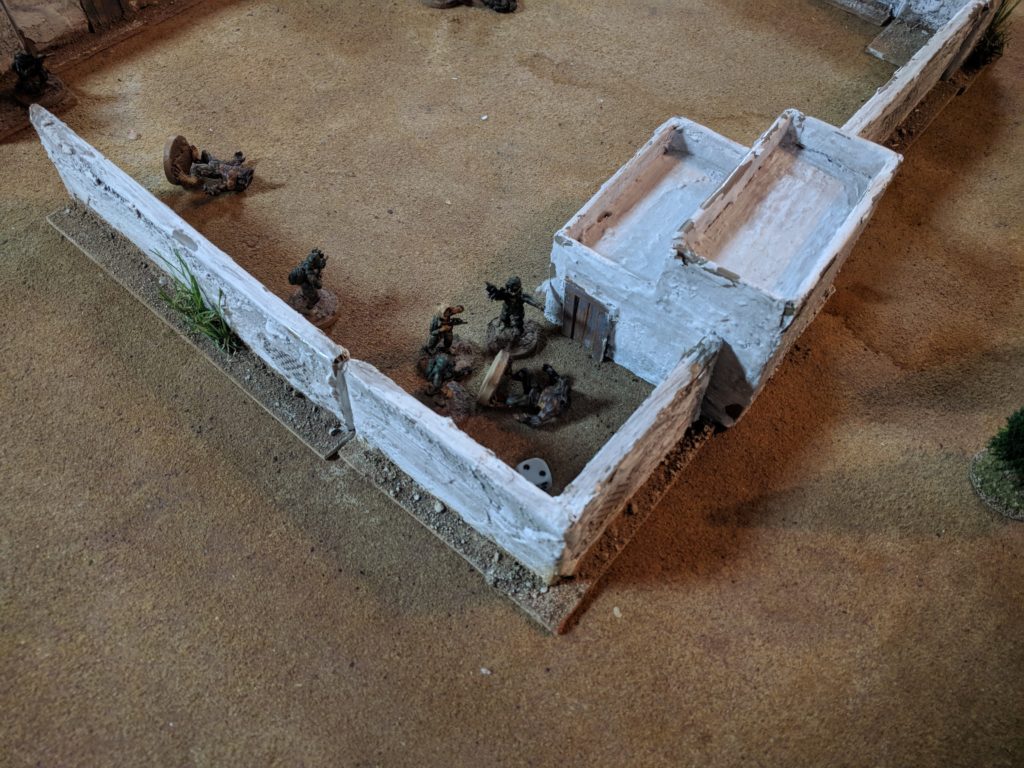 Alas, it was not to be. The wolf’s attacks were parried and in the next turn, he was dogpiled by the remaining SAS troopers.

Final result – all wolves dead, two SAS trooper critically incapacitated. Looks like the boys at Porton Down are about to have some new things to investigate.

I took a different approach when I jumped in as the SAS. Rather than sitting in the compound, I decided to make a break for the separate building and look for a spot where I could take advantage of massed firepower without being ambushed (also to avoid wolves jumping over the walls). To this end, I setup at the south gate ready for a sprint. 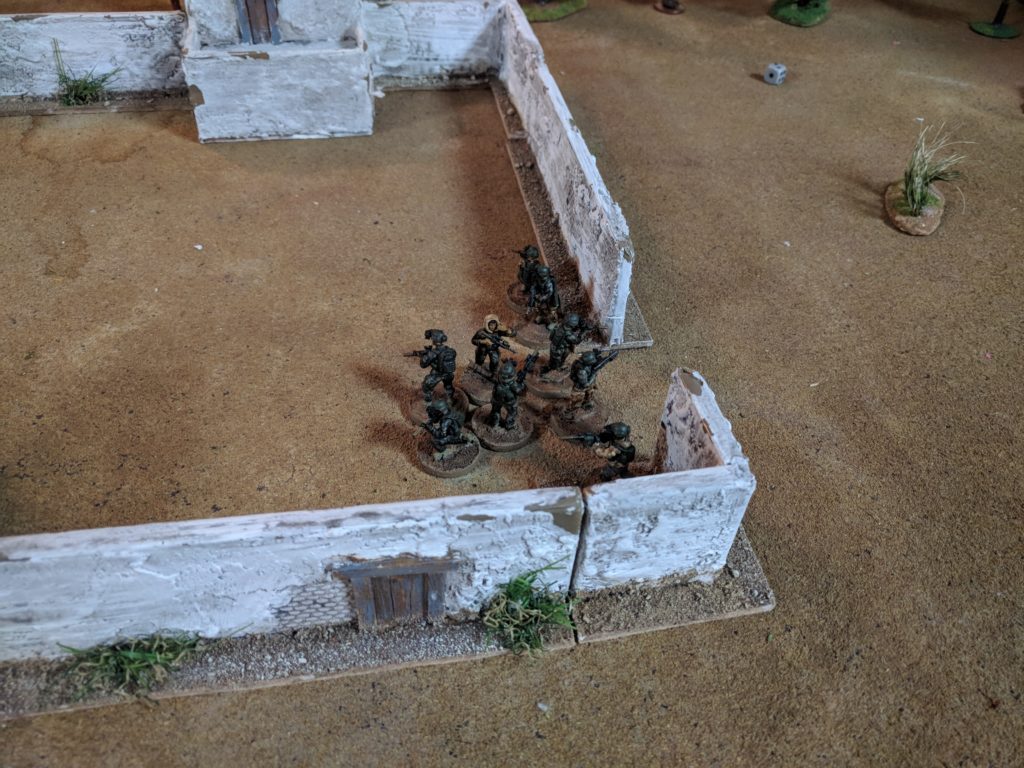 The downside of this blob approach was the fact the wolves could get much closer and very soon one had jumped over the wall to get at a straggler. However, snapfire inflicted some serious damage, dropping him to half health and his attempts at combat were parried. 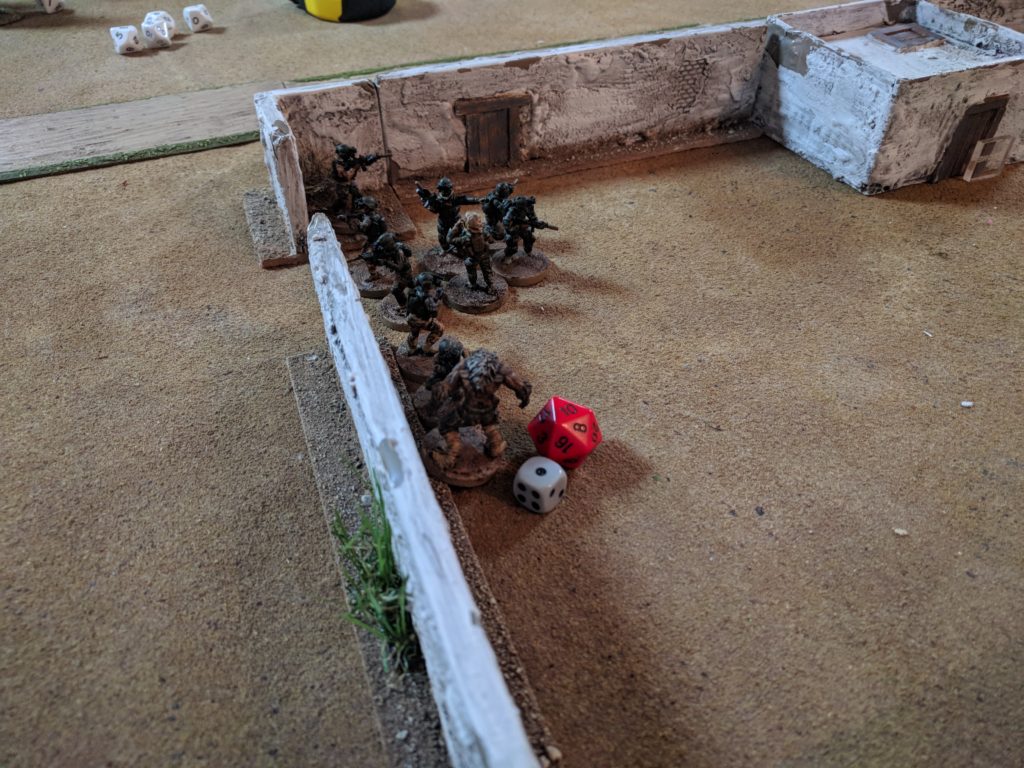 This wolf then attempted to flee but Cunningham the SIS agent was having none of it. Upon activating she turned, sighted the fleeing wolf and dropped it with a burst before it could regenerate

The SAS attempted to make a break for it but upon exiting the compound got slammed by the other wolf. 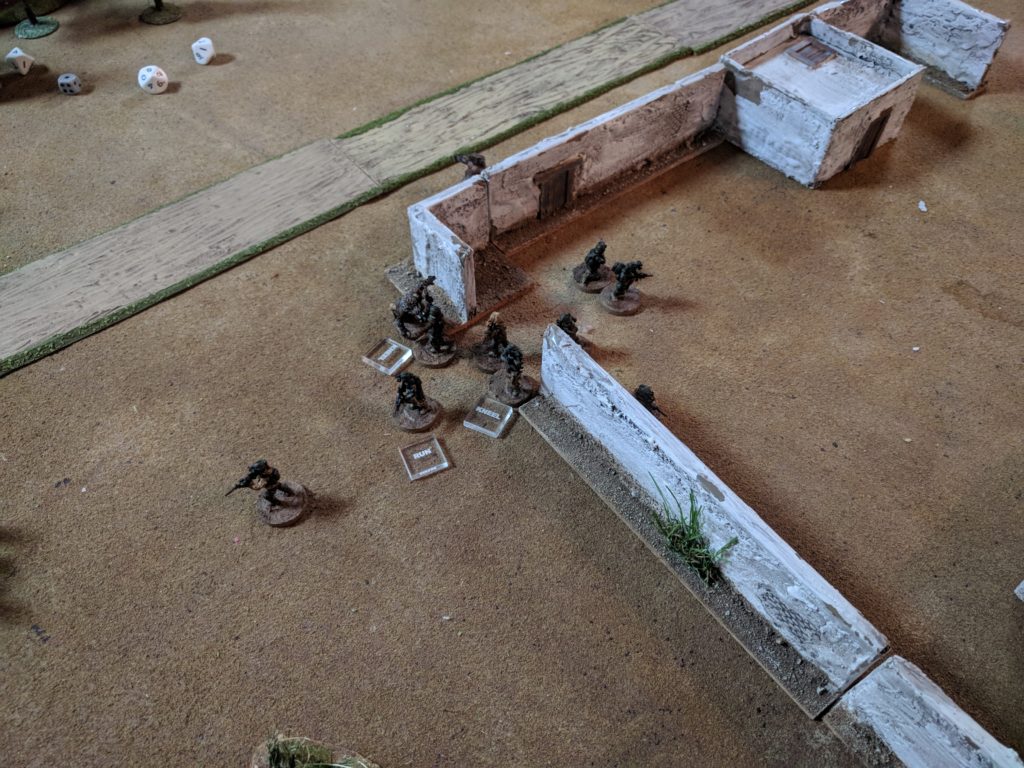 After some bouncing around (including a good few hits on the wolf that regeneration didn’t get round to fix) one of the wolves managed to cause a wound on one of the rear guard. This caused a bubble of morale markers but the Operators were not being put down by a few oversized dogs. 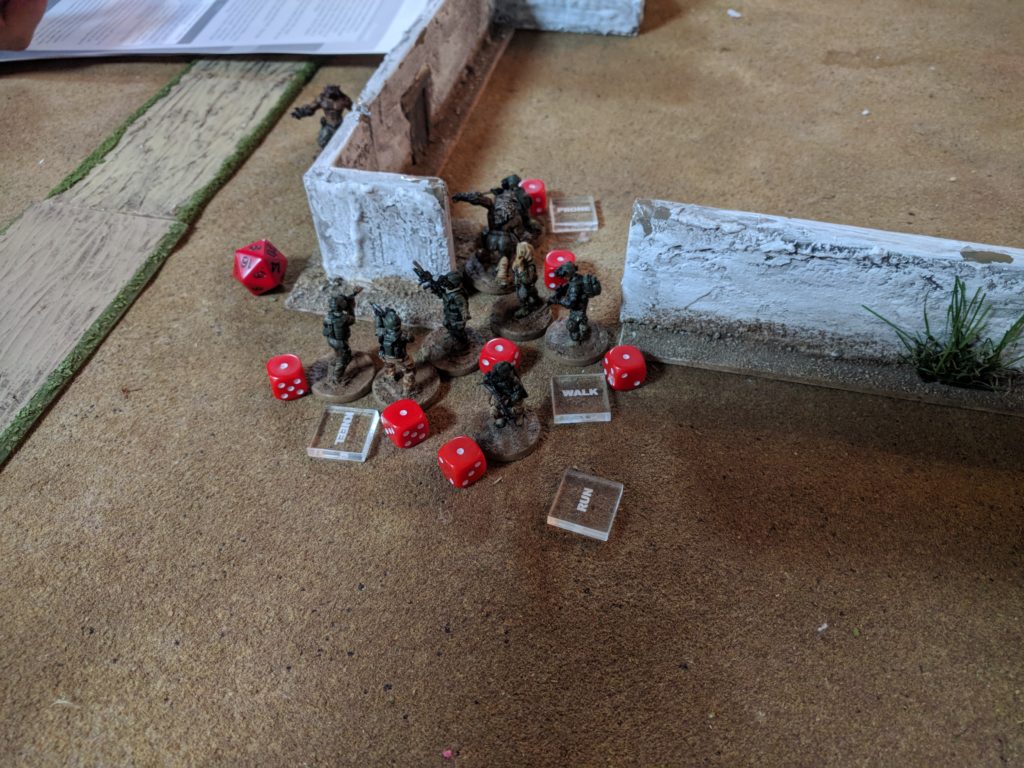 At this point, the Alpha really got to strut its stuff. First it disemboweled the shotgunner (the snapfire shot missed by rolling equal to the target value) before killing the LAW gunner outright. 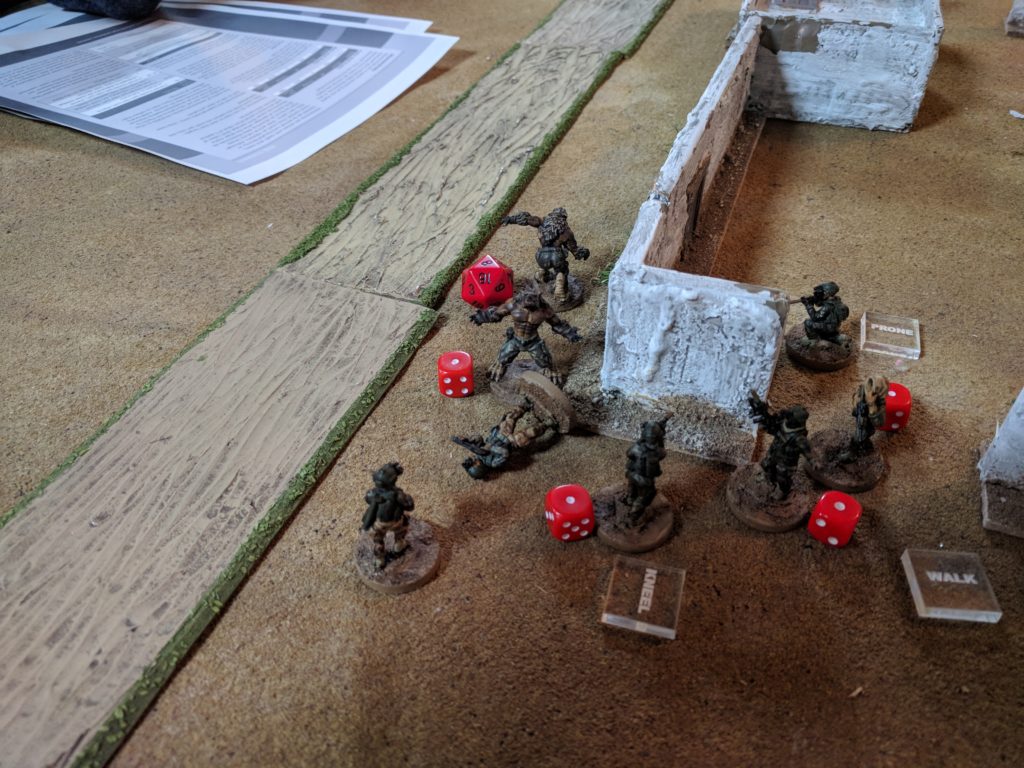 Raging at this kill, three of the SAS bum rushed the Alpha and with a flurry of blows (helped by the fact the wolves can’t parry). 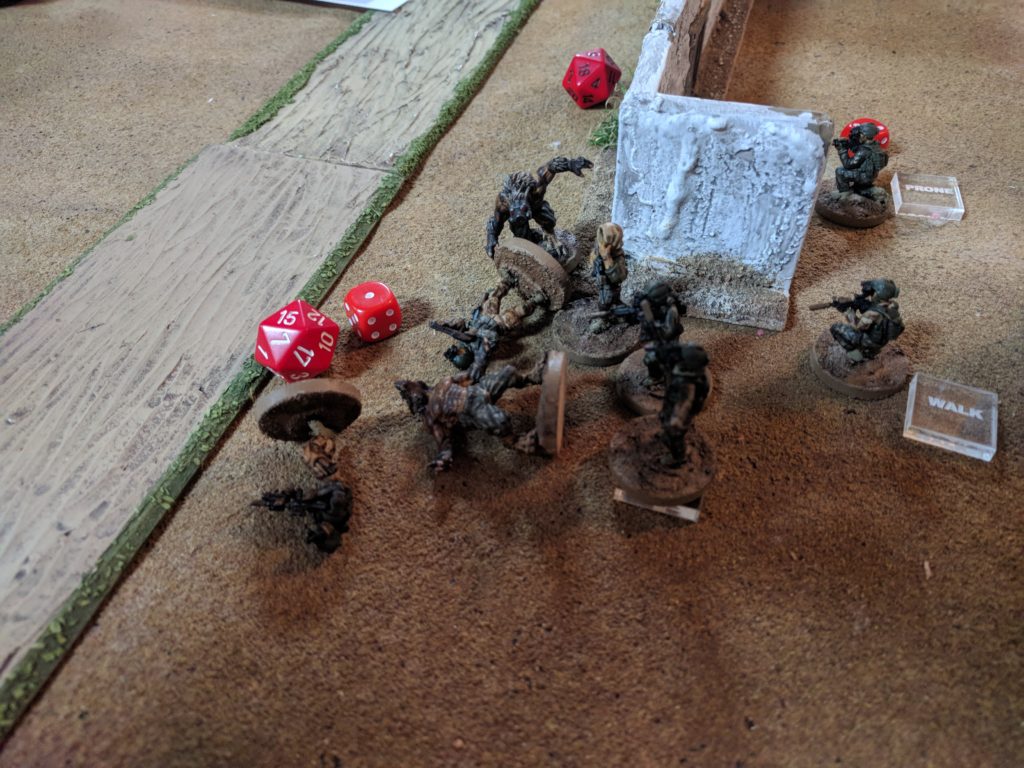 The other wolf, seeing the Alpha taken down, promptly failed its morale test and made a run for the hills, followed by a chorus of jeers from the surviving troopers. 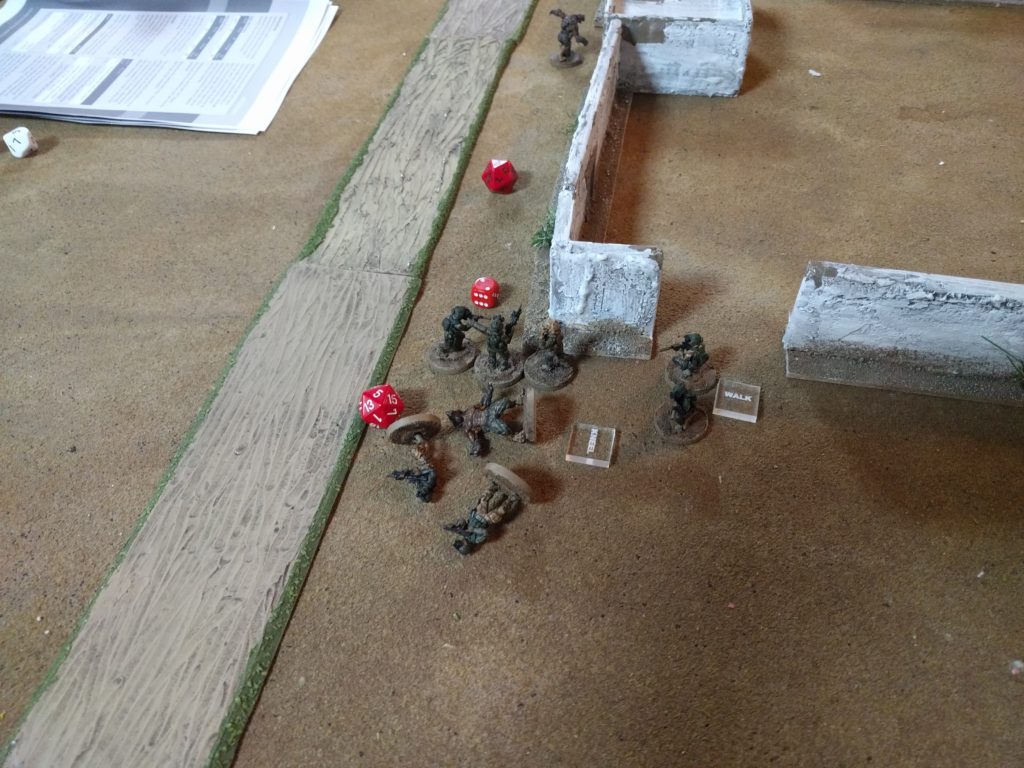 And with that, another victory for the SAS. Two men dead (minced by the Alpha) and one injured but the werewolves had been fought off.

One point we thought up while playing – the pounce move mentioned in the PDF which knocks the enemies prone is designed to cause a problem in close quarters. For this reason, we changed its effects to match up to the “Trip Up” combat action – a nasty way for the wolves to avoid enemies parrying them. Similarly, if you find the wolves a little too squishy, some light armour would help.