If you haven’t checked out the previous posts in the series on Operation Dragon’s Hoard, check out the page I’ve set up for it at https://hntdaab.co.uk/blog/demo-game-operation-dragons-hoard/

Operation Dragon’s Hoard had its first public showing last weekend. This was a pretty major turning point for this project – as well as having the game running, it also needed to actually attract people to it from the horde walking past.

Remember the massive list of things at the end of the last post? Unfortunately due to a couple of reasons (mainly the potent cocktail of other releases, work and finishing a book off), I didn’t manage to get any of the physical tweaks to the board done. I really don’t want get into adding more damage without having the correct tools and material for the job so I pushed back those changes to the long gap between Fiasco and Vapa.

One thing I did decide to do was adjust some positions of bits of terrain in order to change-up the dynamics. BLUFOR now approached the board from a full edge rather than just a corner piece. They also approached the plane side on rather than head on, meaning that the detached wing became less of a trench line. The other two points were shifting the buildings around, and moving the technicals from parked locations to more dispersed. As well as improving the look of the board, it helped to make things a little bit more natural looking.

The final decision was to adjust the number of characters on both sides. BLUFOR was reduced to two fireteams (8 in total) while OPFOR was maintained at 16. The aim with this was to keep a relatively quick pace of play (allowing for a quick turn around) while also providing a challenge. BLUFOR should still have a slight advantage but there should still be a little more balance that what was seen in the original run.

Details Of The Day

Part of the reason for choosing Fiasco as the first run was it’s on my home turf. Needing only to drive 30 minutes into Leeds to get to the Armouries meant I had a pretty relaxing morning. As I wasn’t a trader I could only use the back entrance for drop off. Luckily, there is a cheap nearby car park to leave the car in. In addition, being in Yorkshire meant I could grab my usual York based gaming buddy Peeb to help out.

Setup was relatively painless – the tables were already placed out in the hall and just need a quick swap round to create a more level surface. A quick look around the hall also made me realise I need to a bring a tablecloth next time to cover up the table underneath.

As it was pretty quiet at the start of the day (everyone more focused on seeing what was available rather than wanting to sit down to a game), I decided to jump into a quick game against my buddy in order to give the table some activity. To make it easier to stop and reset once someone became interested, we went for a tiny team of operators (just four) against the rebels. This first game was pretty relaxed so it ended up being a testbed/photo gathering chance. I also got to see Mr REDVector himself, and show off his buildings being put to good use. 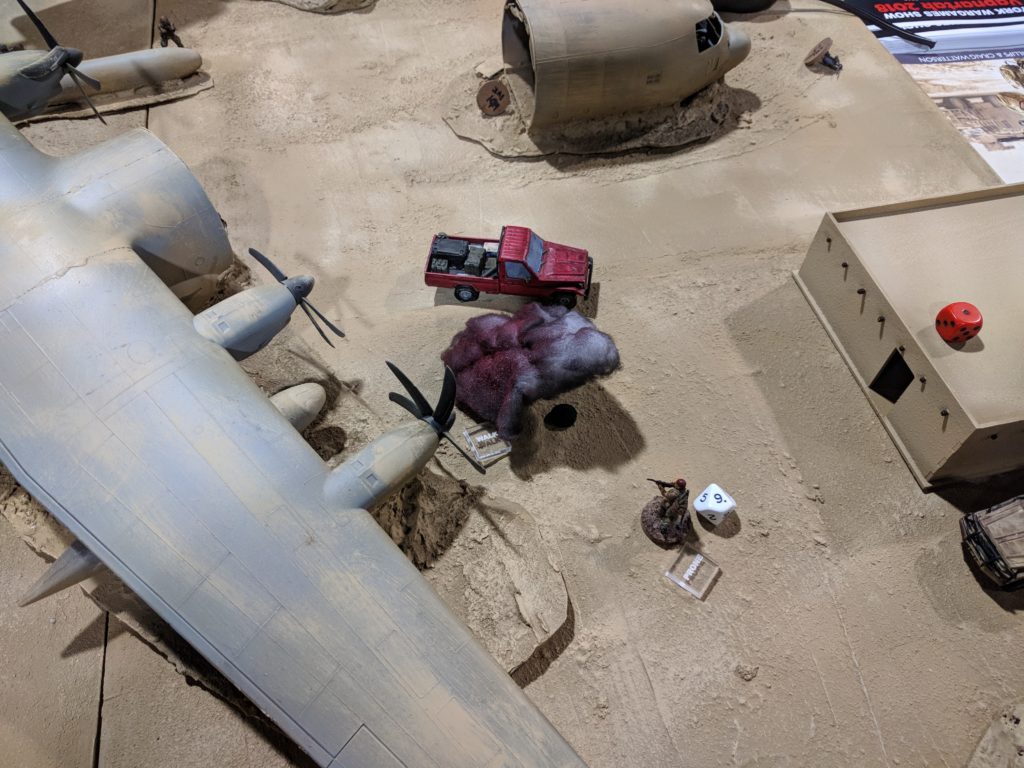 Peeb decided to go loud in a rather spectacular way by shredding a patrol with a 40mm grenade and causing enough suppression to worry the elite reaction team hiding in the building. 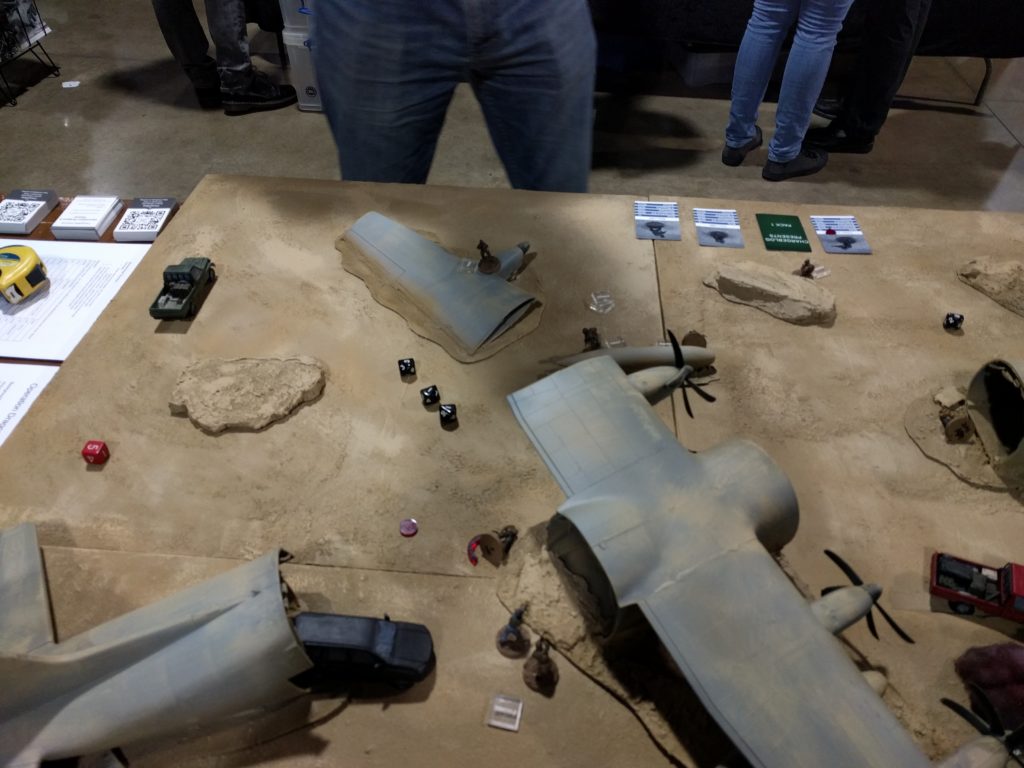 The game also saw one of the OPFOR team manage to sneak behind the BLUFOR operators. Rushing up the wing and standing on the engine, he was interrupted by the operator snap firing. This shot managed to hit the OPFOR, dropping him. Nice try, but no one out sneaks Wyse. 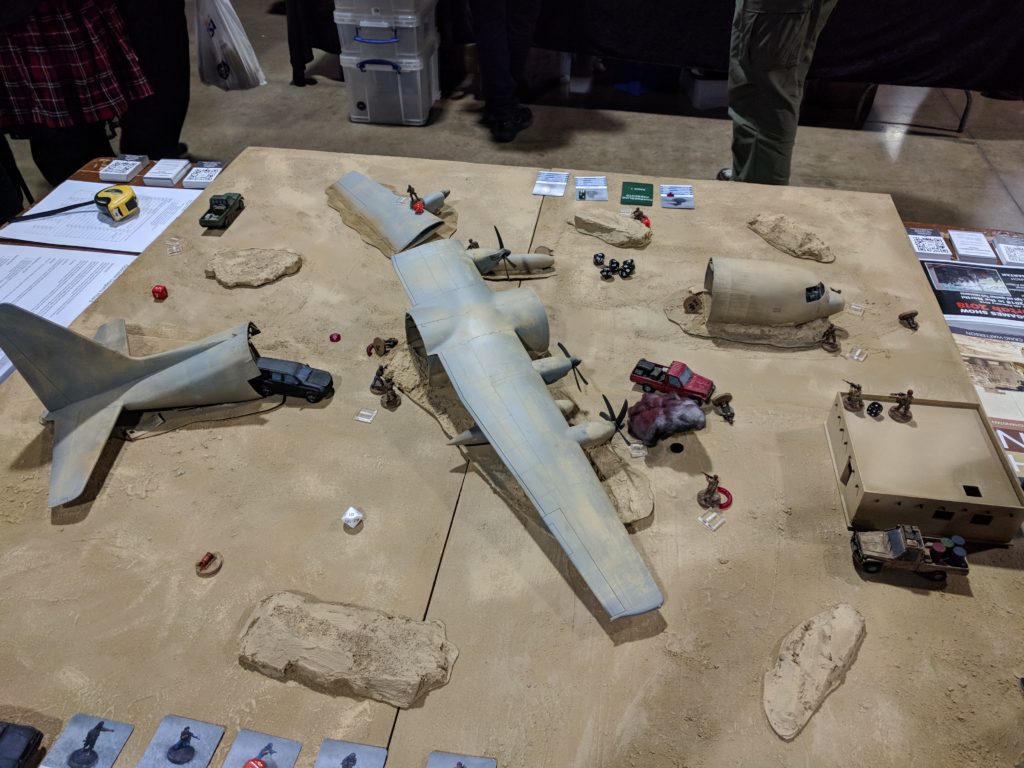 At the end of the game, which ended with the BLUFOR operators with two figures down and the other two suppressed, we decided to do a few tweaks. Bringing the rest of the BLUFOR team on the field, we also moved the OPFOR DMR nest to tweak its field of fire. Rather than seeing across the entire board, the rear DMR now just had a good shot into the gap between the two plane sections.

As you might be able to guess from the lack of photos of Game 2, it was full on. Both myself and Peeb took control of the OPFOR forces to go up against three players (split up with 4 – 2 – 2 in terms of figures). Overall it was a bloodbath, with BLUFOR using its explosive advantages and reasonable skills while snapfiring to reduce the OPFOR team down to only three survivors before calling it.

After another gap (during which I ran round the floor grabbing some purchases while Peeb watched the table) and then we had time for one final game. Three kids took command of six operators and in perhaps a shocking display of the impetuous of youth, managed to achieve the most objectives of any games during the day. Highlights include an early maneuver that saw two operators pile on to a single militiaman and (I quote) “shank him”. 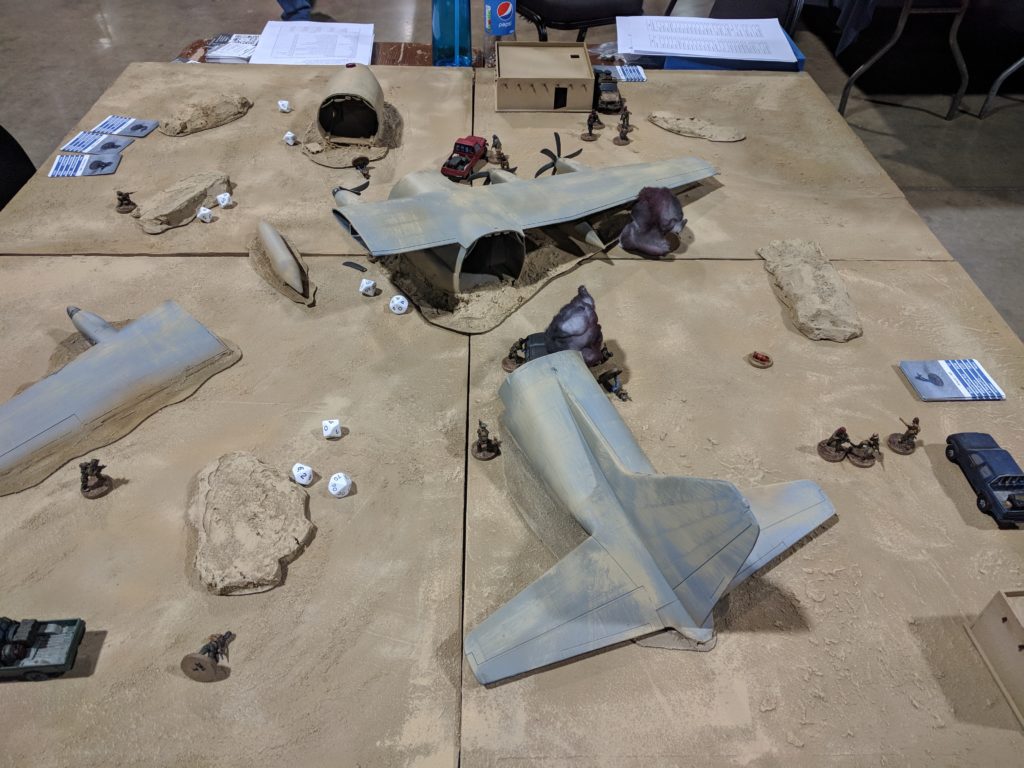 After the game was done it was time to pack up. Everyone we talked to seemed to like the board (especially the centerpiece) and many of those who got to play came away with saying how much they had enjoyed it. I also really liked how many people said how they had seen Skirmish Sangin before but were tempted to get back into it after seeing it being played. 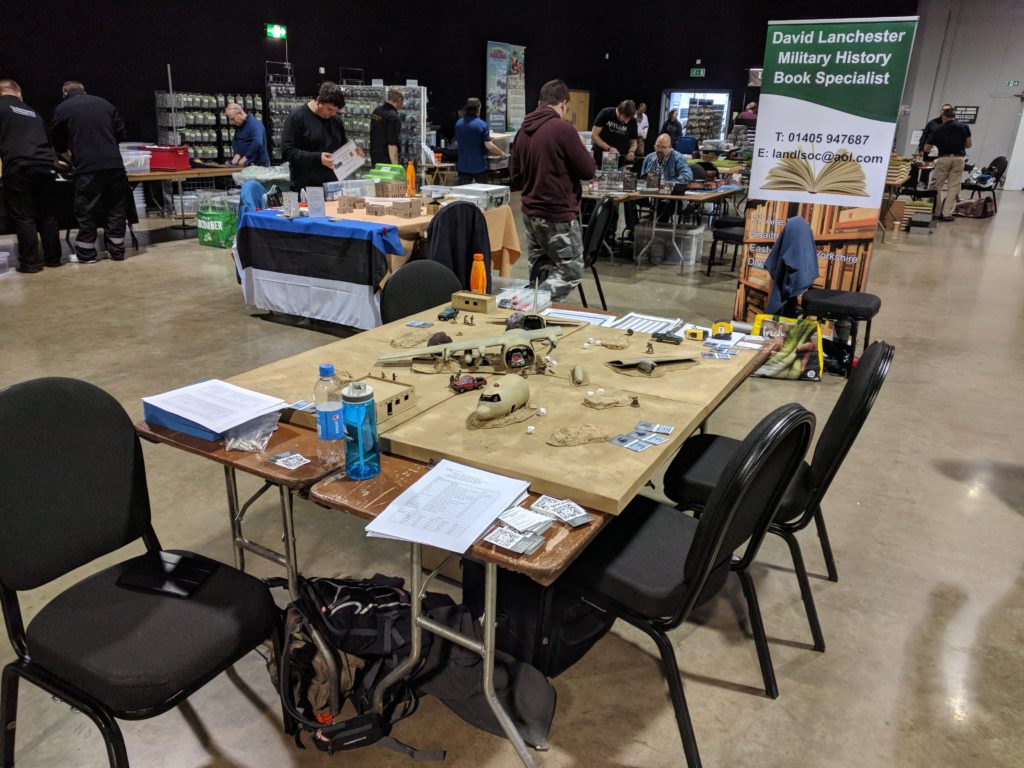 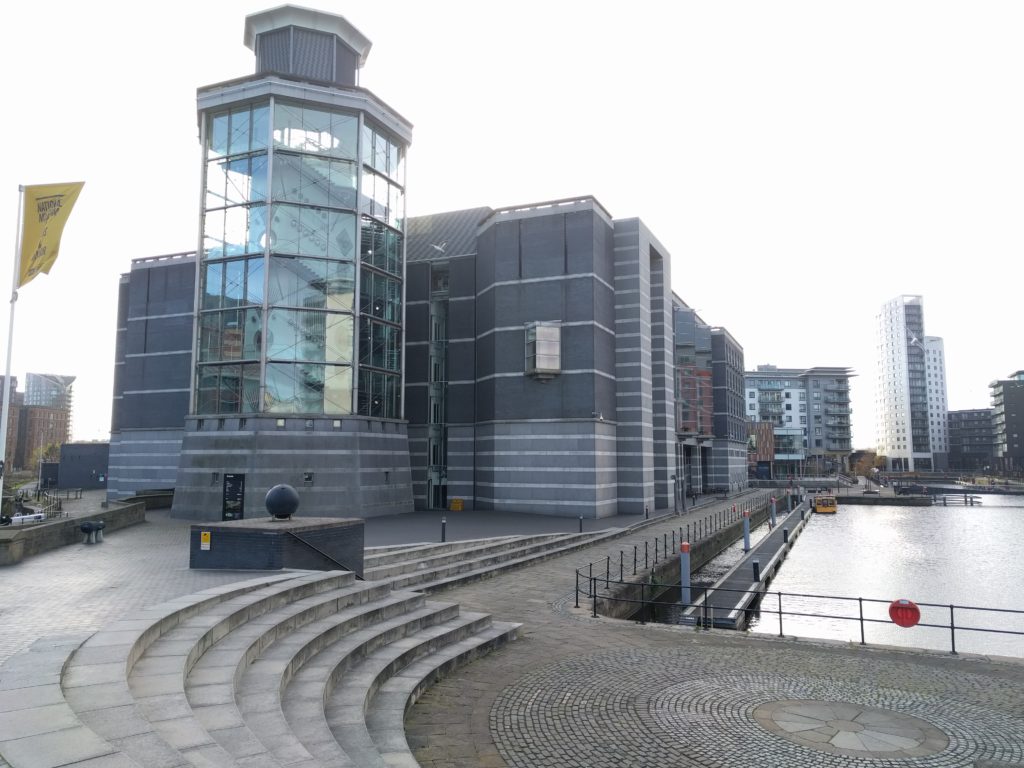 As for Fiasco 2017 what did I think about it? It’s very definitely on the smaller side of shows, with a focus more on local clubs and retailers. As such, it got really quiet by the start of the afternoon and I think many people were there to simply get in, buy and then get out. The other thing is the hall is a little dark. Black curtains and roof worked okay but it did lead to lots of slightly overshadowed photos.

The location is great, relatively central to Leeds and only a short walk to the station. Car parking is expensive if you want to park right next door to the event but a short walk away is £3 all day – one of the joys of being on a Sunday.

Overall as an exhibitor doing something for the first time and with free accommodation in the city, it worked out great. I’m also tempted to come back next year with a new demo game but we will have to see.

Plans For Next Time

The next event is going to be Vapnartak in February at York Racecourse. This is the first Big show of the year I’ll be going to and as such I want to improve the board even more. So there are a few points to look at.

Fix the broken edges on the boards 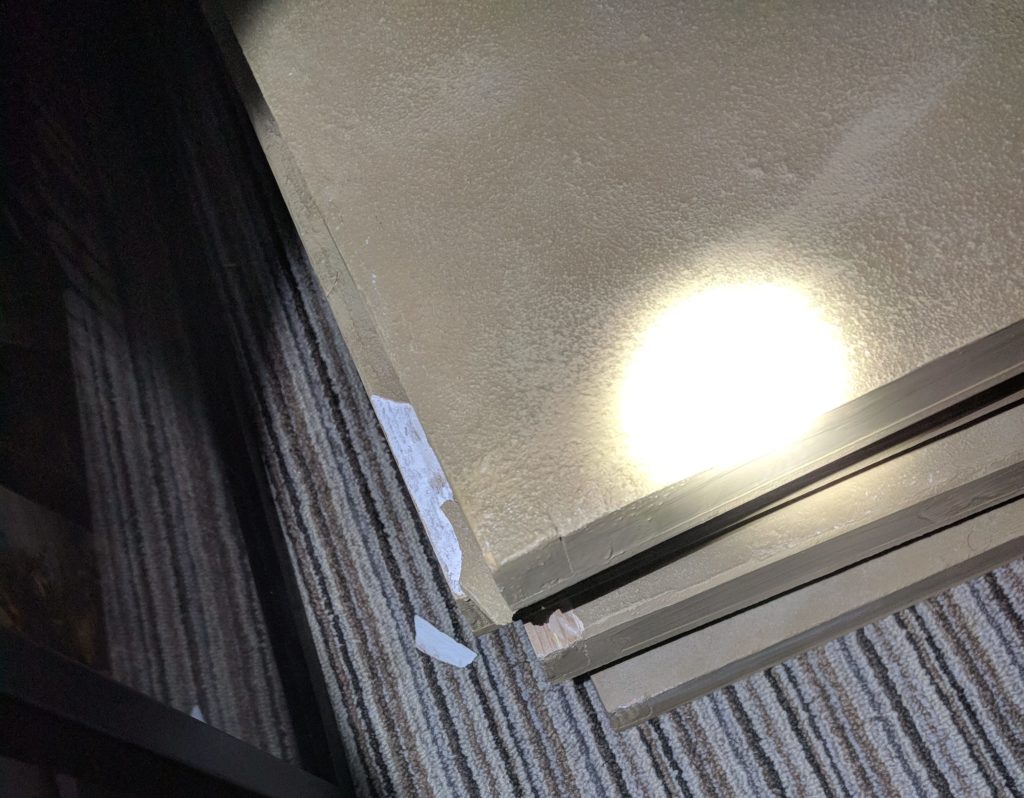 I really like the boards and they seem to have held up pretty well to models and dice bouncing off it. However, the edges have been suffering and so I need to do some emergency repairs. Luckily it should be relatively easy to repair. The bigger issue is how best to prevent this damage from happening too often.

Yeah okay, I know I mentioned this one last time. Same plan however I should be getting the necessary tools (dremel and airbrush) and material (wire and aluminium foil) at Christmas

Still trying to decide between gold transport and mysterious box – either way this should be more interesting than the objective to “look through car”.

So we’re still not 100% on the balance. I think that 6 BLUFOR seemed to be the best number to balance speed and the giving the players enough toys to play with. On the OPFOR side, I want to tweak the composition. Primarily, I want to adjust the elite reinforcements so they don’t just roll out of building.

To make the game a little more exciting, I’m tempted to get some cards made for vehicles and have the OPFOR backup arrive in a pickup and backed up by a .50cal truck. This would force BLUFOR to get into a good location rather than letting them sit back and plink. It also helps with the action movie esque flow.

I’ve learnt the ways from a friend at SESWC, but I think I need more. Especially if the Operators get more explosive weapons.

It’s safe to say the cards are a hit, with lots of comments and questions about them. With some upcoming releases and the possibility of swapping some figures out, more cards are needed!

So overall I’m calling Fiasco 2017 a success, which is a strange thing to say based on that name. The game worked, people enjoyed it and I didn’t destroy the terrain in transit. I should be doing an update post just before Vapa in the new year so keep your eyes open for that!