Despite Spectre only being around for a few years there are a few models that have achieved collectors status. Be this due to accidents or careful planning, these models are hard to find. That said, if you want to watch eBay or work out what your opponent across the table is using, this article should help you out.

All the photos for this article have been sourced from the Spectre Miniatures website and Facebook pages.

The first set we’re going to talk about are those models which were planned to be limited releases. Every April at Salute, Spectre release one or two sets exclusively at the show and in limited numbers in the online store on the same day.

2014 was the year of the Kickstarter. Before its start in May, Spectre attended Salute with demo board, early figures and a freebie. The operator below was for many people the first Spectre figure they owned. Armed with a PDR and carrying tactical kit over civilian clothing, he can be seen as the predecessor to the Agents range. He would also reappear in the kickstarter that year. 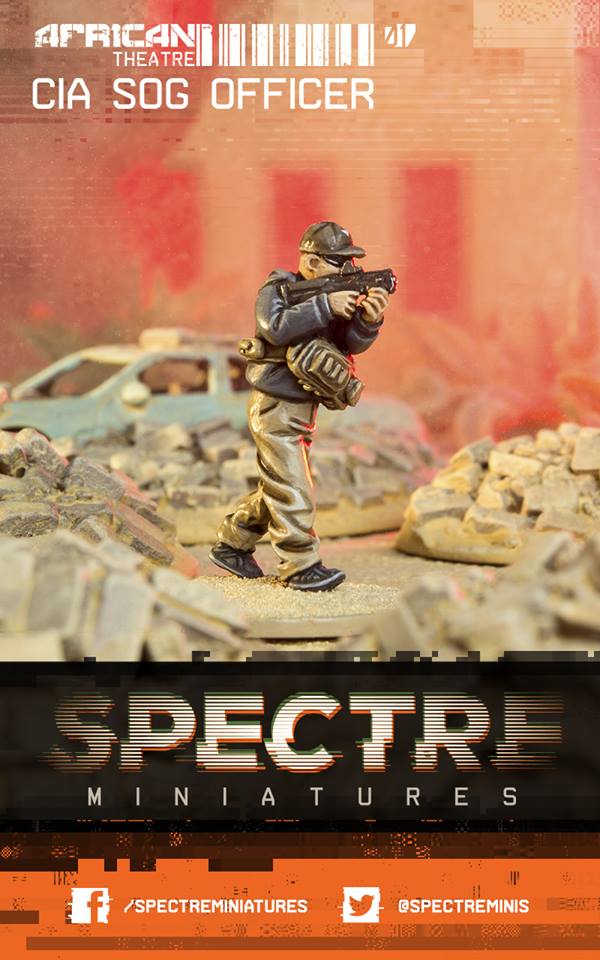 2015 (The first year I went to Salute) saw the first event after the launch of the wand the stall had all sort of figures on display (including some still unreleased). This exclusive was the first female figure released by Spectre, ready to work alongside the previous year’s freebie or other intel agents. There are some great details on her, such as the sunglasses tucked into the shirt or the Molle go-bag slung. I decided to tweak mine by adding a shemagh around the neck and I really need to get her painted up. 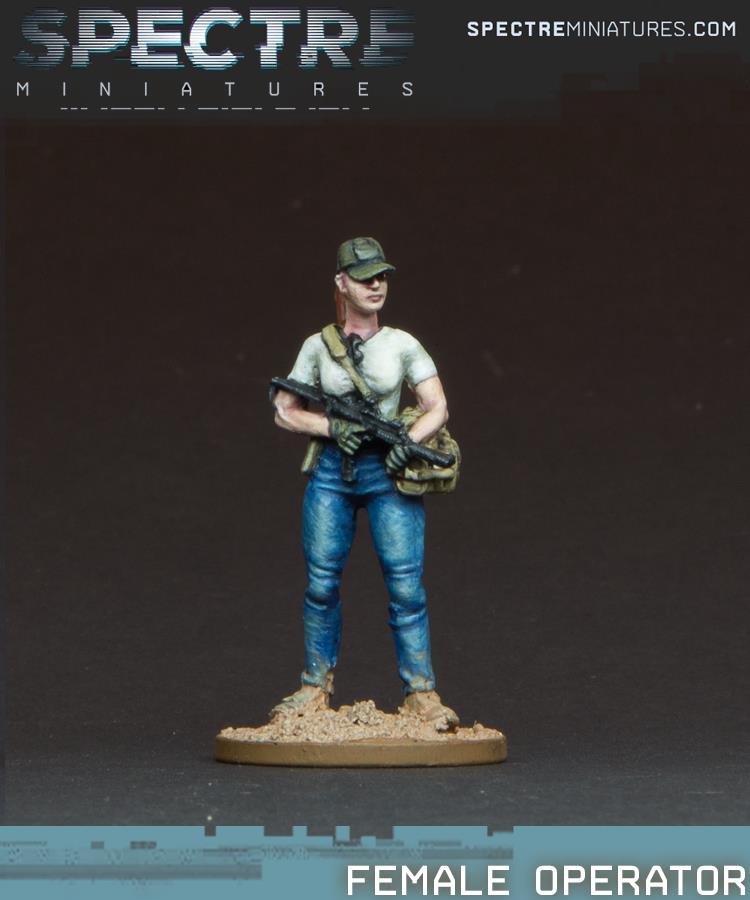 2016 was a bumper year for Salute releases. Alongside the release of the core packs for the Tier 1 and Agents ranges, Spectre also delivered two exclusive figures. 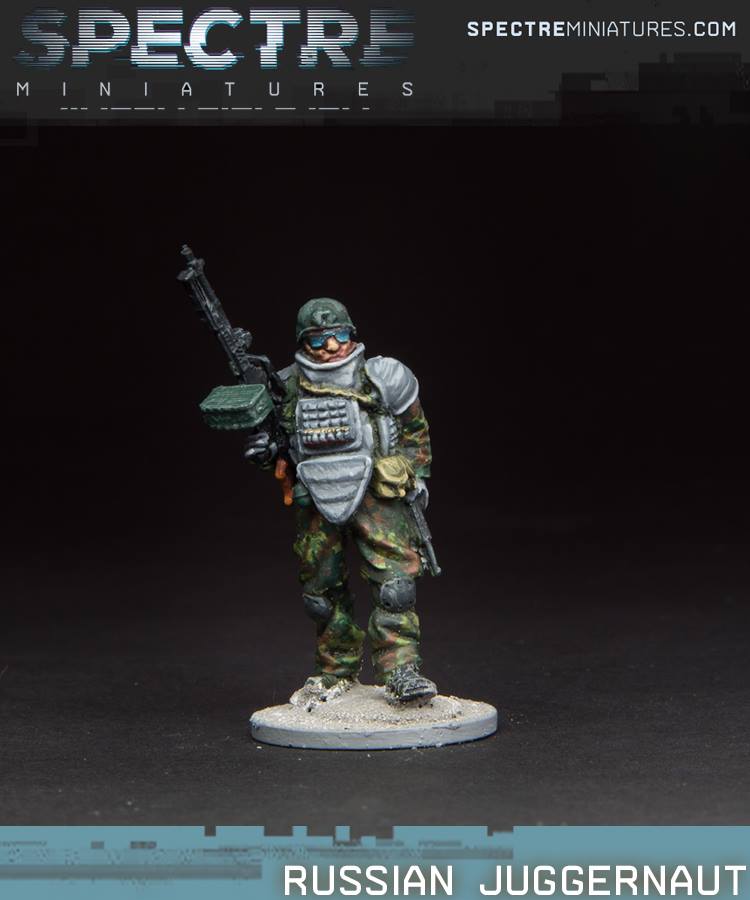 This juggernaut is perfect for a scenario play, stomping round the board in heavy armour and wielding two long arms. The PKM and shotgun are dangerous combination, especially when backed up by the rest of a Spetsnaz team. coming in the door behind him. Seemingly a habit with my exclusives, I added a visor to juggernaut. 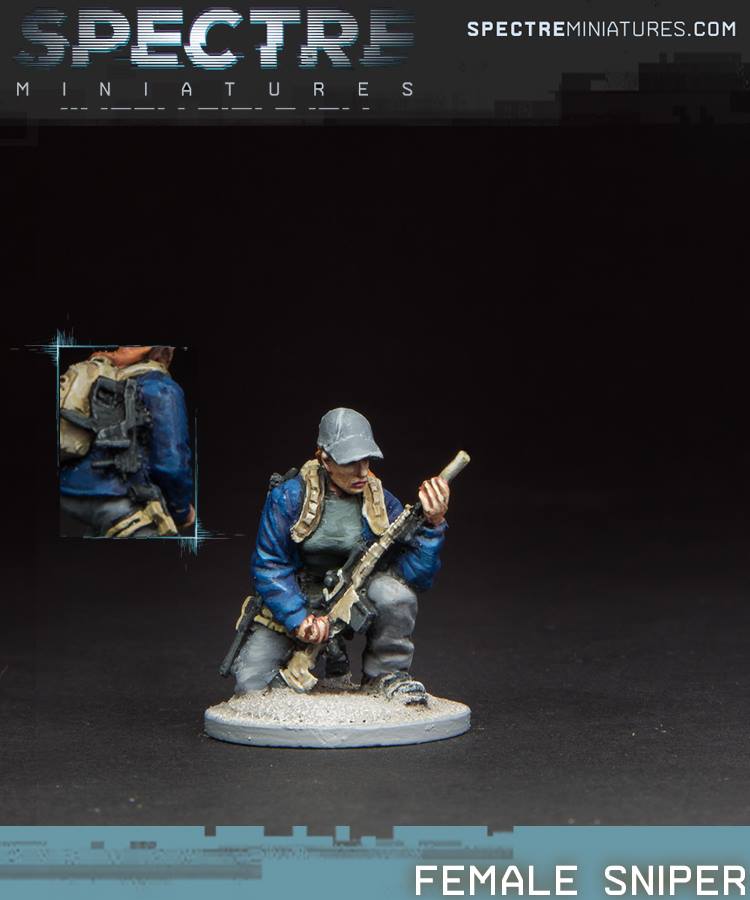 The second figure was designed to work alongside the Agents released on the same day, giving you some sniper cover for your team. She has a really cool pose and again the details are astounding – I’m a fan of the stowed Vector on the side of the pack.

2017 saw me almost knock over the stand in my rush to buy new figures and a few early releases. The first Razors were sold, a few pieces from the terrain range were released (such as the ammo boxes) and this exclusive figure came out. 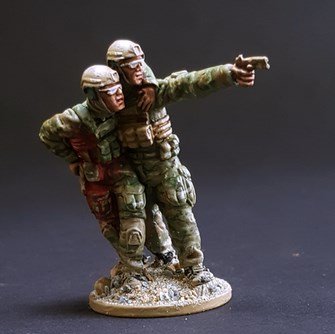 Rather than being a tweaked figure for an existing range that could sub in, this set is something special. Its much more of a scenario centrepiece, showing an injured operator being carried by his buddy while under fire. There have been some really nicely painted version of this on the Spectre Operations group if you have one and are looking for inspiration.

The main bulk of Spectre’s rare models all come from one place – the original Kickstarter. Starting May 2014, the project was the first many people (including myself) heard about Spectre and it helped to get them off the ground. During the process a total of 28 sets were made available to backers. 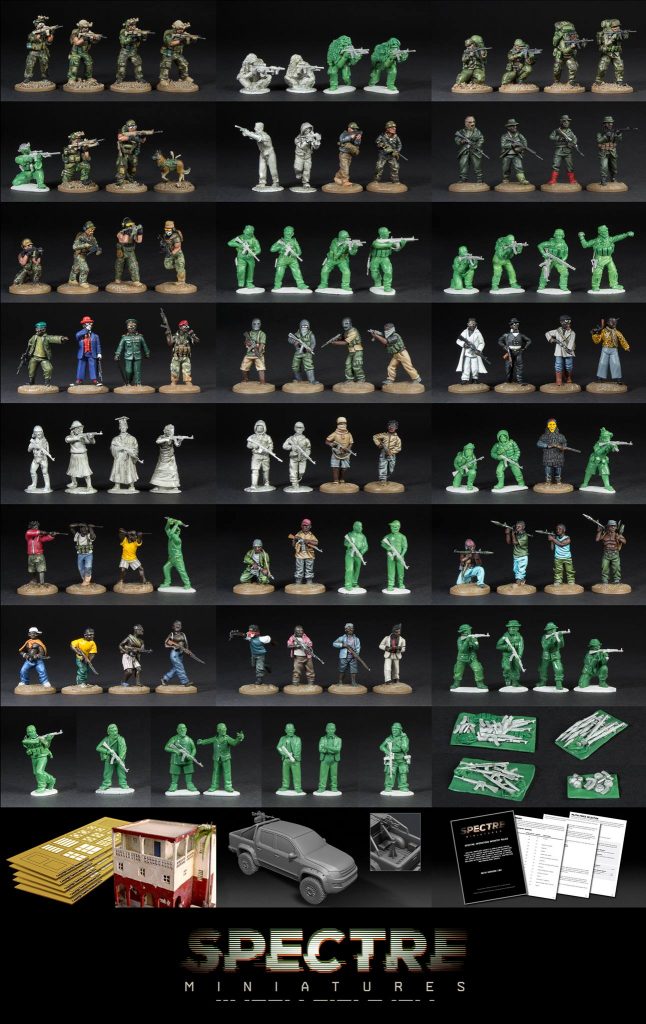 As it stands today, many of these figures are no longer available. This was due in part to the original moulds being lost. On the other hand, the core of the African Militia range comes from this release – it’s missing a few of the stranger models (yep, that’s a man wearing a dress as one of the bulletproof militia) but support weapons and crazed gunmen are all there. I originally went in just for the SOF figures and I really regret not picking up the Africans when I had a chance. 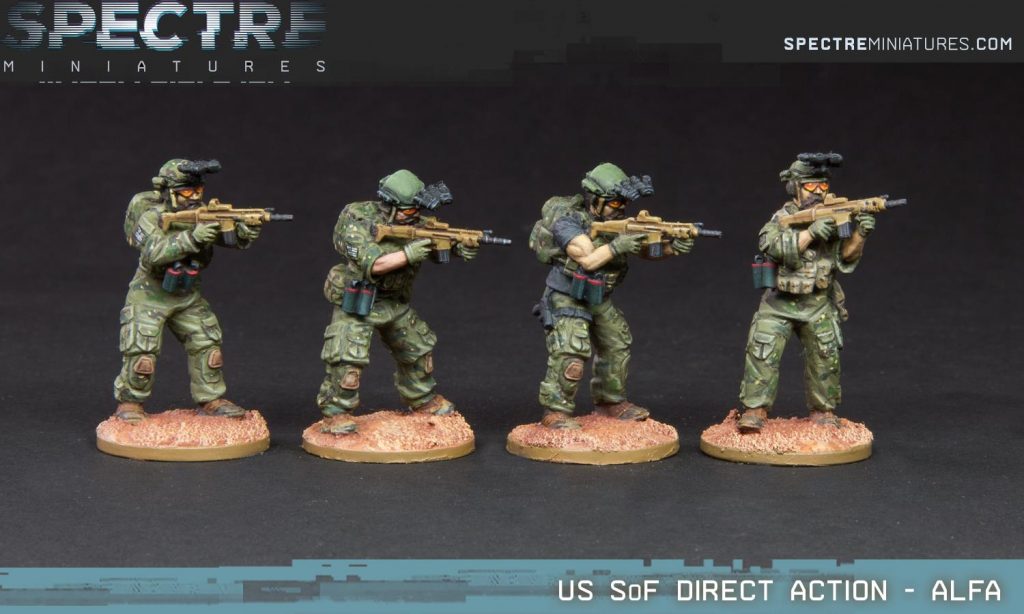 The original Delta/US SoF figures were the set that grabbed me and said “The is a range for you”. I think the newer Task Force Operators are a massive step up in quality (and don’t have separate arms that bend or need gluing) but these guys have a certain character to them. Also all the details we know expect from Spectre are there – from the kneepads to the attachments on the SCAR, they look just right. I still really like using them alongside their newer brothers in arms. 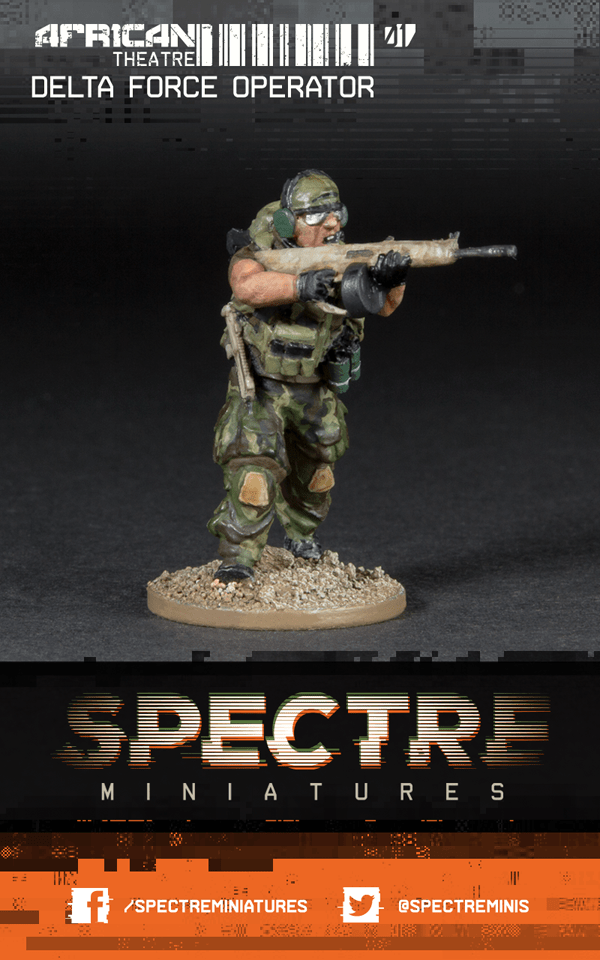 Delta in the Kickstarter also included this guy. Ready for breaching duty, he has a MP7 slung at his side with an AA12 out as his primary. He also has a collection of breaching gear on his back. You can see this guy’s concept being updated in the Task Force Operators AA-12 – Alfa figure.

The other pack that grabbed people was the SAS Recce Patrol. Laden down with packs and armed with L119s and various bits of kit, these guys are the forerunners of the SAS Jungle Ops range. There was also the SAS Close Observation Team, which is where the Task Force Operator snipers in ghillie suits came from. Unfortunately, their two buddies with L119s and a UGL got lost in the jungle somewhere.

Something I think is missing from the current range is some private military contractors in the less cutting edge kit, i.e. baseball caps and civilian gear with M4s or AKs. The kickstarter included three packs. The main things with them is that they are wearing non-standard kit but still look like a unit thanks to careful picked similar details.

PMC Alpha is the most modern of the three team. Armed with Vector SMGs and wearing plate carriers over t-shirts, these guys look like a well-funded team ready for a close quarters street fight.

PMC Bravo is a little more heavily armed. Equipped with AKs and various attachments/secondary weapons, these guys would work well as Russian advisors or mercs somewhere from the eastern bloc. You can see little bits of their design being used in the Deniable Ops range. I also need to point out the second figure – another with separate arms, something that drove me mad while assembling them. 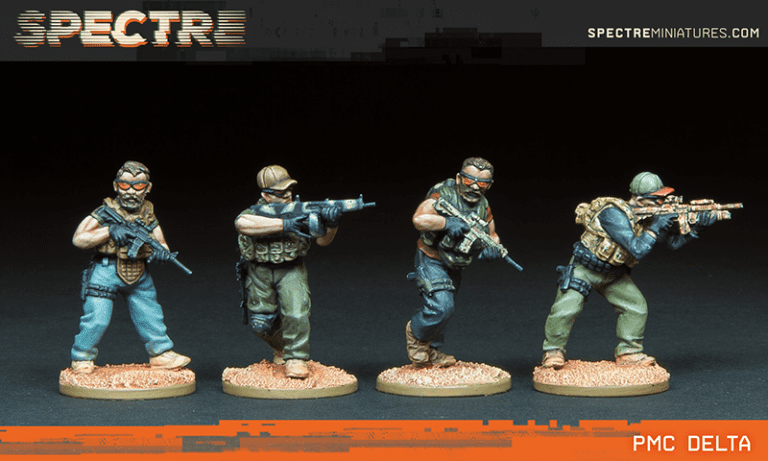 PMC Delta is the classic Western Contractor look with M4s, plate carriers and, of course, shades. This pack also includes the AA12; combined with the UGL, it gives the team a nice mix of firepower for such a small team. 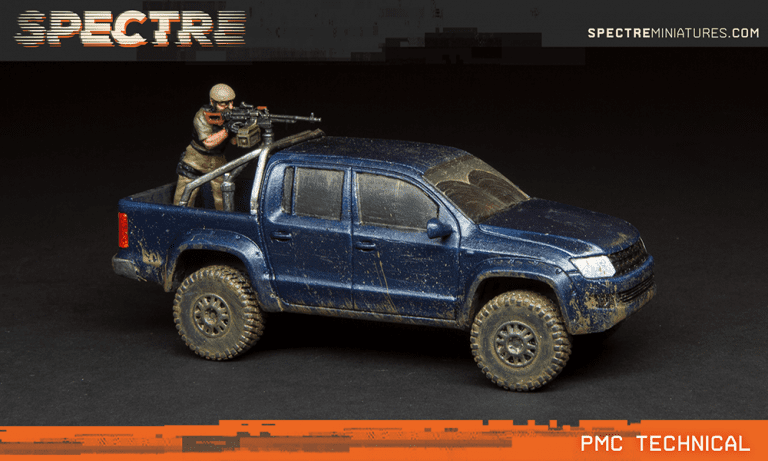 Speaking of mercs we come to the biggest kit that was part of the kickstarter – the PMC Technical. This was Spectre’s first vehicle and as you can see, it looks pretty cool. Like with the Deltas, you can see how this was the starting point for the current range of technicals. I’d love to see some parts come out for the current vehicles, letting us add the PKM mount for something a little lower profile than the .50cals. 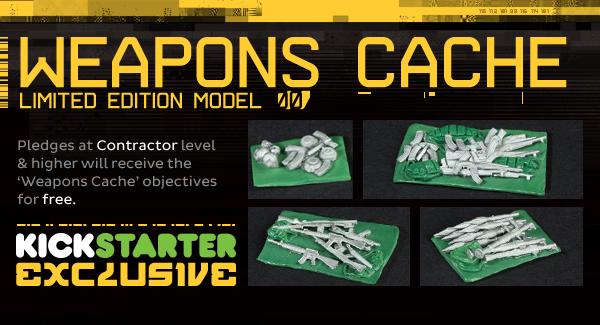 Something else cool from the Kickstarter was the Weapons Caches. These were small bits to add to the scenery or work as objective markers. I’d love to see an updated version of these.

After the Kickstarter was finished, Spectre setup their webstore and started adding new items in addition to some of the kickstarter sets. Many of these are still available, such as the Task Force Operator Marksmen and Grenadiers. Others however have since left the store. 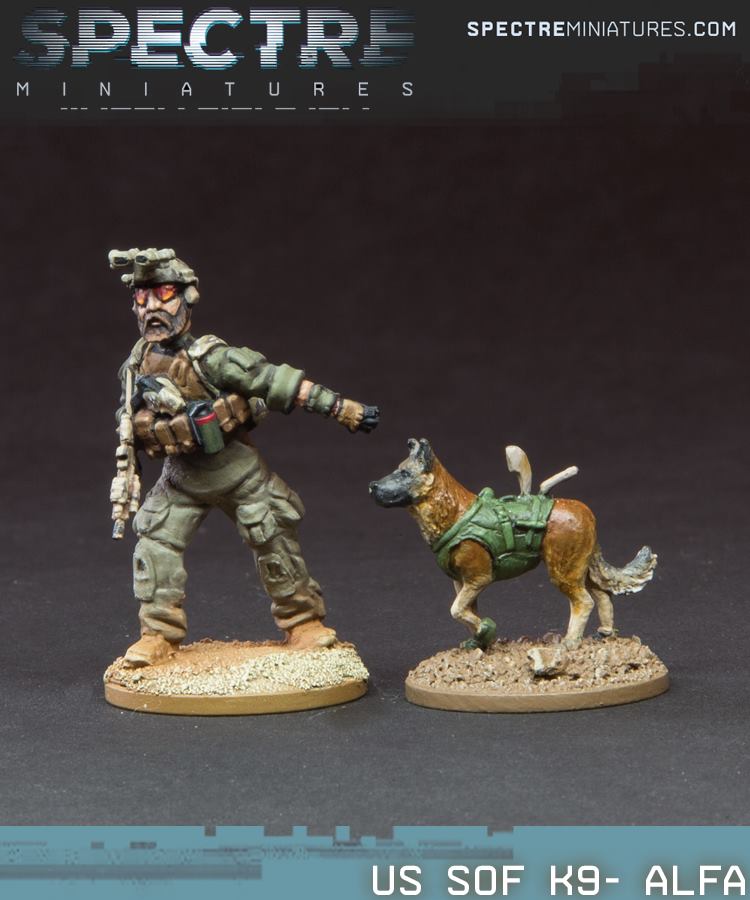 We’ve seen multiple dog handlers in both the Kickstarter and more recently with the UKSF releases. This guy was designed to fit with the original US SoF, giving them a dedicated dog handler rather than having him tag along with one of the normal riflemen. There is a load of extra detail on him, from his compact 416 to the setup on his rig. 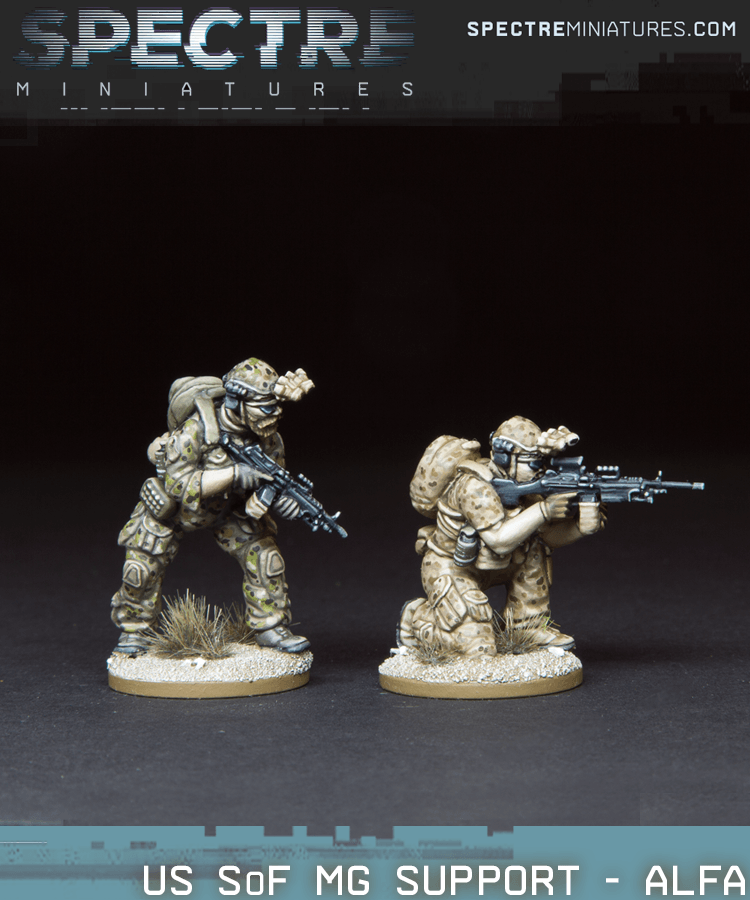 Another set of additions to the US SoF range was this pair of Machine Gunners. The variation in poses and gear are great as usual for Spectre. I still use them and they look great alongside the newer figures. 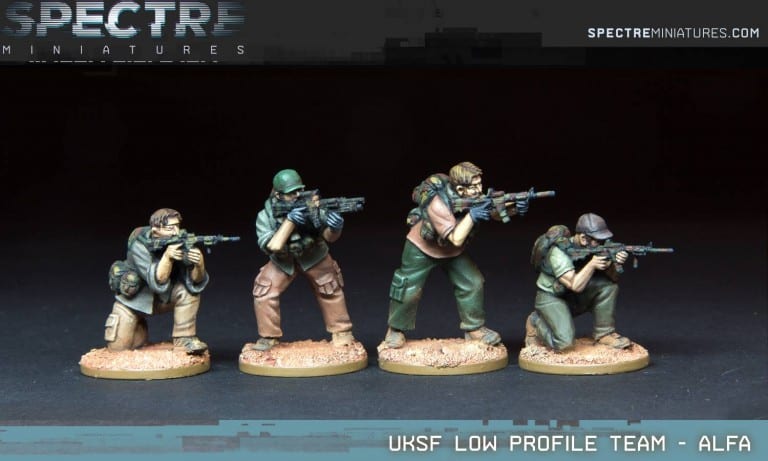 The final part of the original SAS teams (alongside the Recon guys and the team in ghillie suits) are these operators in civilian clothing. It was quite cool to have the three teams, each with similar guns and heads to represent the same team in different roles. 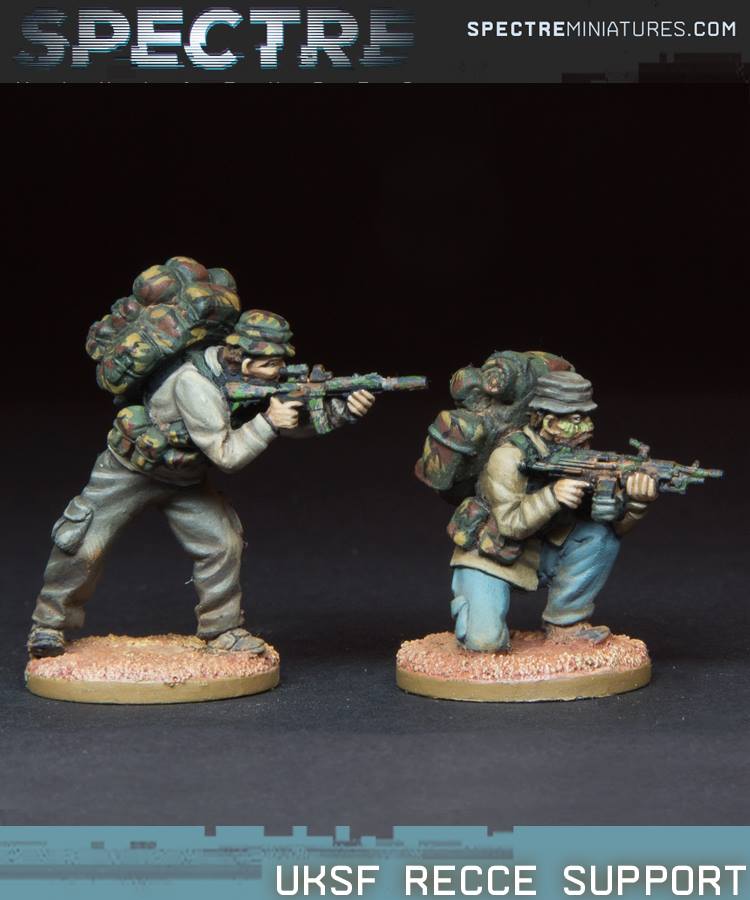 To backup the SAS guys is this pair of support. Carrying their bergens like the rest of the Recce guys, the marksman and MG bring the team up to six and give you more tactical options. 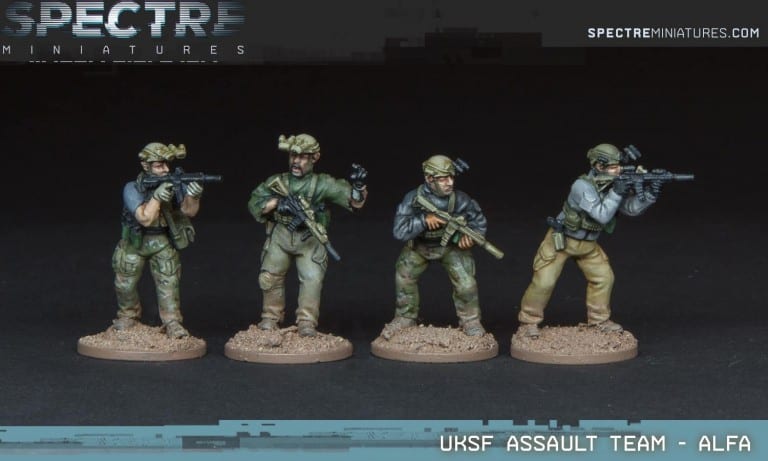 Something else that happened in the early days of the store was an experiment. Spectre looked into producing high quality resin models and two sets were chosen – the UKSF assault team and a pack of militia that became . Although the results were spectacular in terms of detail, there were some mixed feelings about resin over metal; I personally wasn’t a massive fan having broken barrels much more easily. In the end, metal won out

I hope you’ve enjoyed this trip through Spectre’s back catalog. Hopefully when you spot some suspicious characters on an eBay auction, you’ll know a little more about them. It’s also great to look back and see how far Spectre has come – the early models are pretty good but each release includes more detail backed by more research to help bring us the most up to date figures around.

So you want to know about the rare stuff? The REALLY secret stuff?

Spectre used to do something called a “Covert Package” – give them £5.99 and you get a pack of random figures. I got a few duplicate figures and one or two Africans I’d missed but one day I got this guy I’d never seen before. 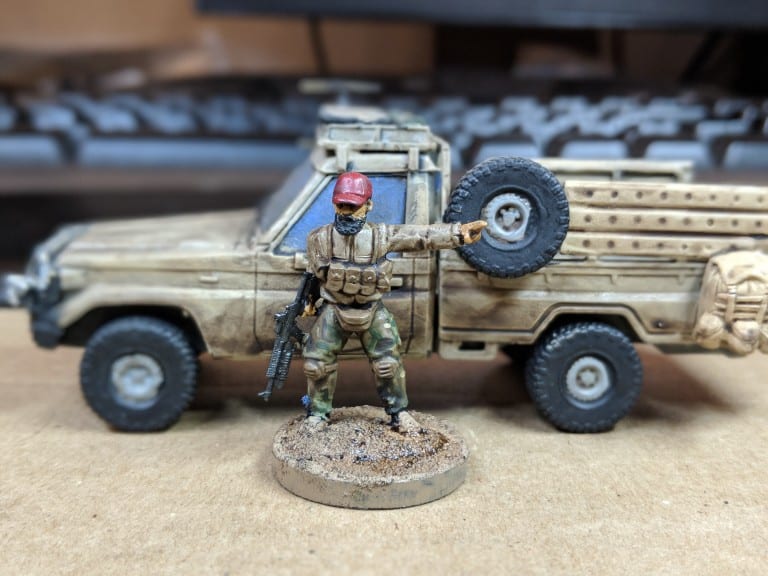 Armed with a AK/UGL, he looks similar to the PMC Bravo team but slightly tweaked (looking at the knee pads, beard and top). He also never appeared on the store. It seems like I managed to end up with a very limited run figure, confirmed after talking to a few people on the Spectre group. I’ve ended up using him as a highly trained advisor to the various militias. If you come along to one of shows I’m at next year, you might even see him on the table.