The main plan is really just to keep going with the current plan as a base level. 2 posts a week works out pretty well, with Wargaming Week taking about an evening so the rest of the week’s hobby time is free to work on whatever is needed for the main post. However, I am going to start working on a buffer of posts (probably impressions of older models or tactics) that I can slot in to the calendar when things get a bit rushed. I also want to avoid the issue I had with the SAS releases at the end of last year, so rather than rushing to finish that week’s post, the plan is to now work one week ahead. Hopefully you won’t see this change but we’ll see what happens.

An experiment I’m tempted to try is do an extra post every other week focused on hobby elements (such as an extra impressions or Project update) depending on the rest of the week’s activities. However, this will all depend on how much of a buffer I manage to carve out. Tying into this is the desire to get new releases painted and impressioned quickly which can get in the way of pre-arranged blogs.

The big takeaway from the survey is that people like Battle reports. In an ideal world I’d be playing modern wargames every week but I’m not sure I can persuade other players to always be playing in the ultramodern setting. That said, I’d like to make sure that there is a new battle report every month.

Finally, video content. It’s something I want to try but I need to get the correct kit together. I’m also getting stuff sorted for better photography so hopefully I’ll get some better picture in this year’s post.

The big thing I’m doing this year is splitting the work I want to into several projects. Going to say now, not all of these projects will be finished this year. Instead these are target areas: 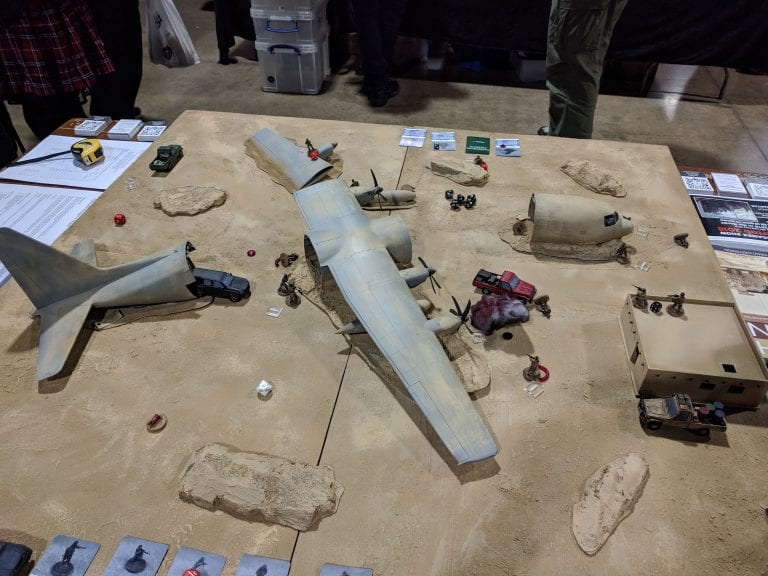 The game has been run twice but I’m not finished with it yet. The main thing is improving the look of the downed C130 – it should be a bit more crashed and a bit less “attacked by hacksaw”. In addition to that, there are one or two elements to tweak in terms of the gameplay such as better balancing between the two sides. The final point is making sure the final objective is something more than just “HERE IS CAR PLEASE SEARCH IT”. The current idea is either a macguffin in a box or some form of gold on a pallet.

As part of this, I also need to reproduce the cards I have for the characters. This is because I decided to repaint the insurgents to improve them from the uniform green and black to something a little more ragged 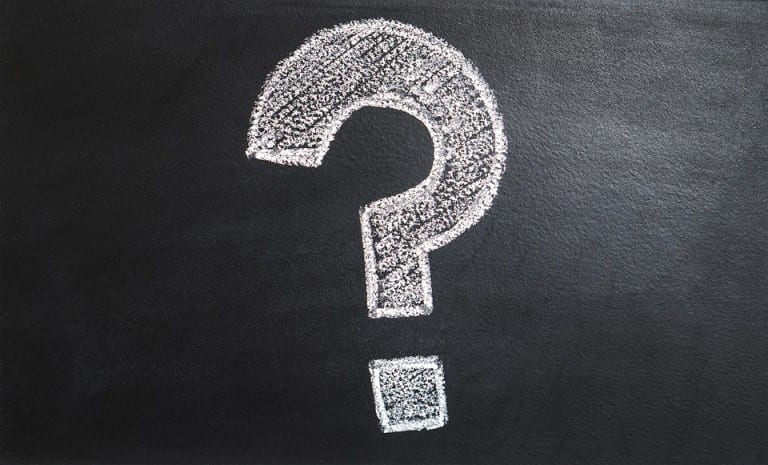 I really liked running the game at Fiasco and for a wide variety of reasons I think I want to keep going back there to run new games. I don’t particularly want to run the exact same thing two years in a row (and they probably wouldn’t let me) so that means I’ll need a new game by October. Not 100% sure on what it will be (either rules, scenario or figures) but the intention is to reuse the baseboards and just change what appears on it. 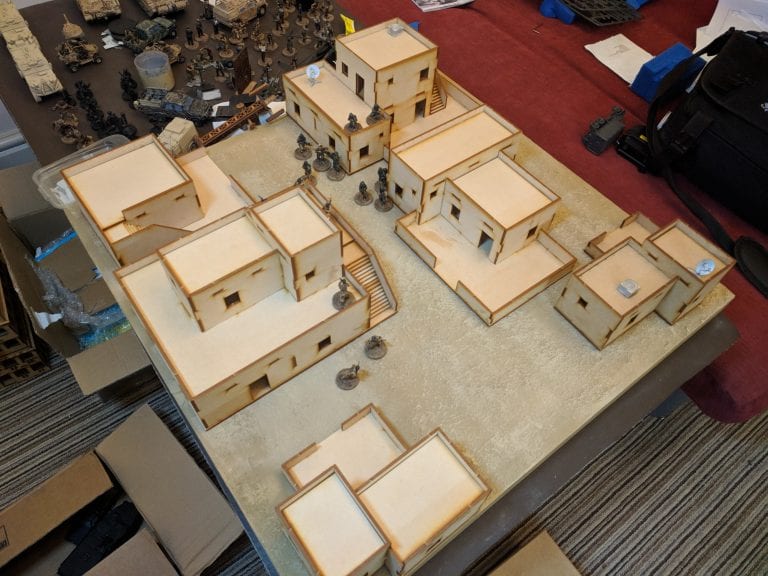 I’ve shown off these Knights of Dice buildings before and, as mentioned in the impressions piece, I really want to spend some time detailing them. Thanks to the design they are perfect for bolting new elements on top, such as roof panels. I’m going to aim for a much more modern look but I haven’t decided the exact details yet 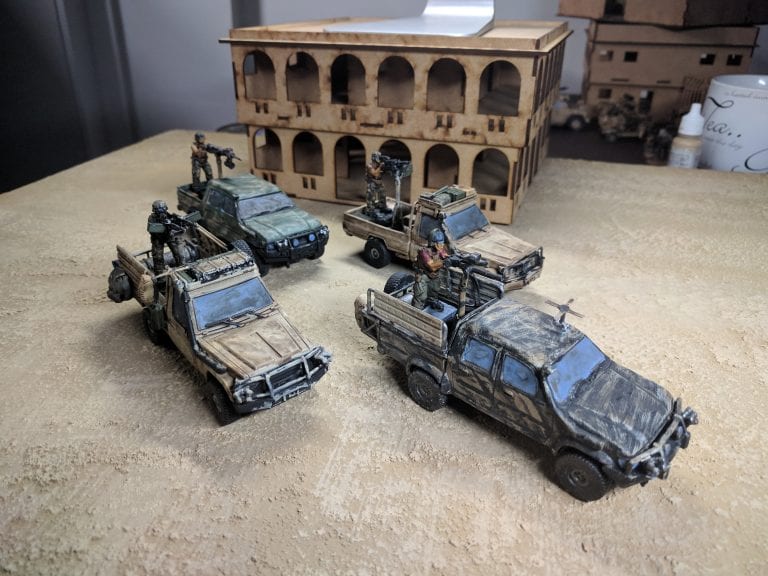 I’ve done a fair few articles in this project already but it’s not yet finished. As well as the last weapons that I haven’t assembled yet (such as the AA guns), there is also the possibility of more weapons and crews being released. For example, we haven’t received any crew for the African militia. The aim with this project is to be a one stop shop for all the hints and tips you might need for building technicals. 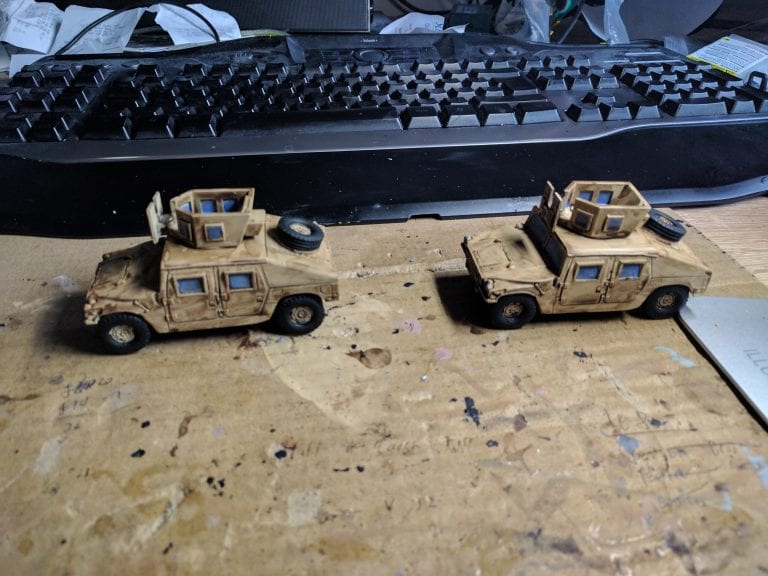 At Vapnartak last year, I picked up one of the Humvees from Empress (pictured above). As much as I like them (and they are fun models to have), they are a lacking some of the detail of the Spectre vehicles. After hearing the announcement that Spectre were working on their own range, I quickly sold mine to a friend and started preparing to build some more. Having talked to the Spectre guys, they are looking at a pretty massive range with plenty of options for key components so you can theme them for almost any role. Due to this, and foreseeing the oncoming hole in my wallet, this range seems like the ideal candidate for the project experience. 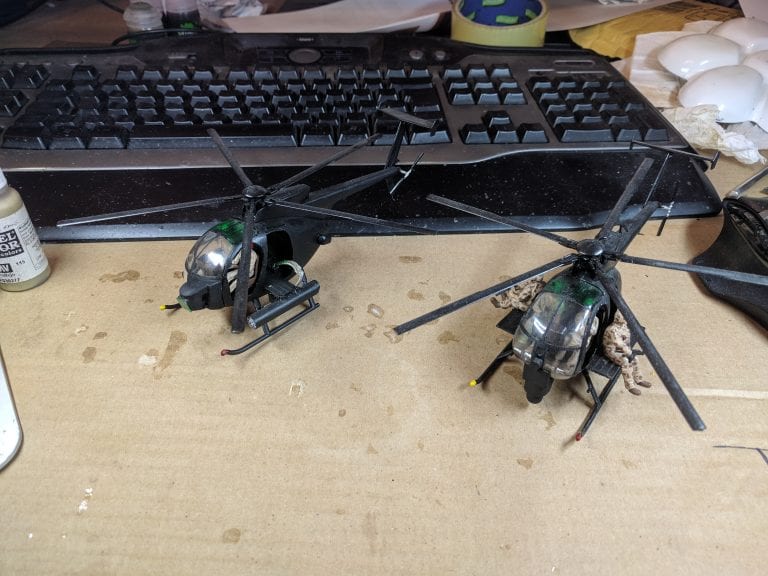 Ah, Project Little Bird. Announced back in 2016, killed in 2017, reborn late 2017 after a friend pointed me to an ongoing ebay auction. The plan now is to finish building the third helo as a MH6 and then decorate them up (including fixing the armament) to make them look like the Little Birds from Modern Warfare 2. This means adding the FLIR turret and the rappelling rig.

The final stage is building the flight stands. I’d like to make them a bit more dynamic than the plastic vertical ones so I’m looking at retractable car aerials or something similar to adjust the height and then a way of adjusting the angle of attack so you can have them swooping around the board. 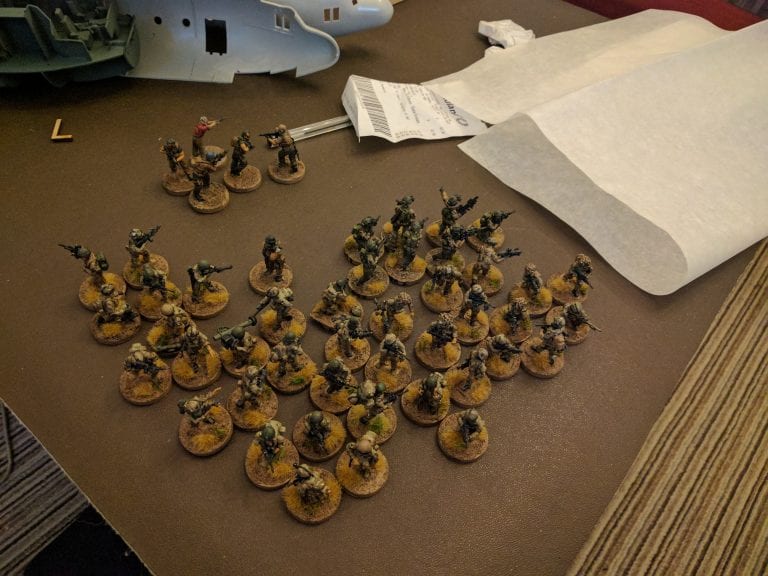 The British Army Platoon I have from Empress is the dream project. I was really happy when I finished it but then realised that maybe it was something that could be improved so I stripped them and rebased them. Combined with the new releases (such as the marksmen and the additional fireteam I built) this meant I now have a reinforced platoon ready to be painted up in the new multicam scheme. Once they have been finished, I’ll have a full platoon ready for a campaign season.

At the end of last year, I decided that I wanted to start setting some games across the Red Sea from Bazistan in East Africa. After doing some more reading on Eritrea, I decided that maybe it might be a bad idea to use it as the setting for some wargames. So a new imagi-nation is in order.

This project is both a writing and terrain building exercise. I need to set up the country, detail the factions and setup the ongoing engagement. The current plan is something a bit less high-intensity than Bazistan in the present day but with a different style of battle in the past (this may or may not be related to me eyeing up the Rhodesia range Eureka has). The terrain is also a bit different in terms of both the buildings and the natural environment. For example, I’ll actually need some green plants.

I’m also chatting to a friend about improving the production values of both imagi-nations and it may lead to something else. 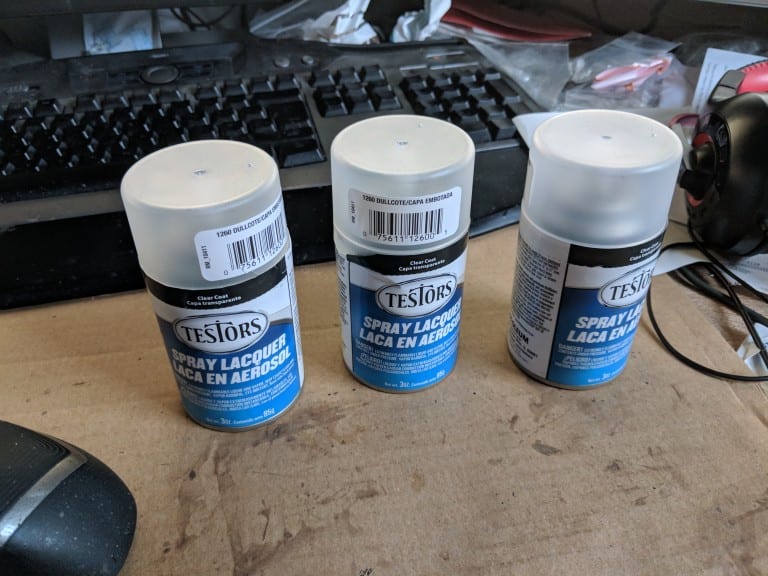 Okay so don’t be mad, but I kind of made a key mistake – due to botching up a varnish job a while ago, I haven’t been varnishing my models. This means they look great but quite a few are looking a bit banged up. Luckily I’ve grabbed some new varnish which seems to not mess up. The plan is to work back through all the painted models, touch up any issues and then varnish them. 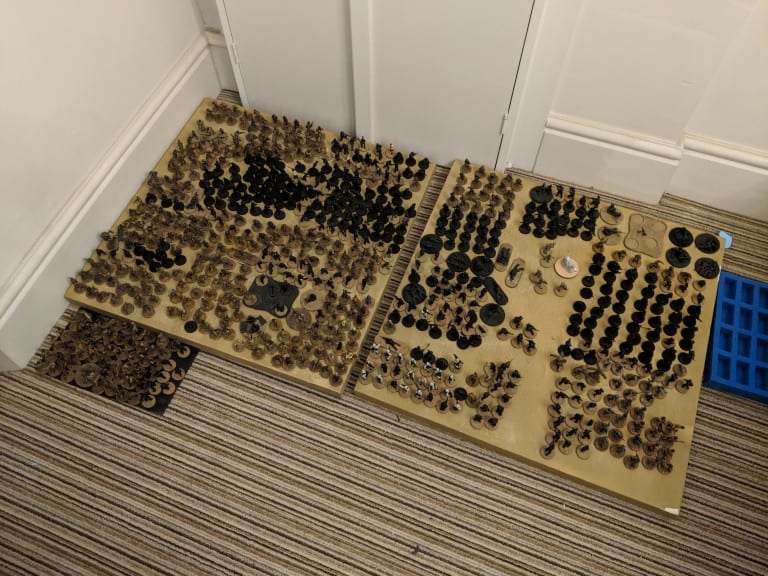 Ah the big one. I have done the new year checkup and worked out what figures I actually own. From this, I can tell I’ve dropped below the 50% mark in terms of painted models. This need to be corrected. In an ideal world, I’d just crack on and concentrate on getting it painted but there are multiple reasons (including keeping a head of new releases) that means this isn’t what I want to do. Instead, I’m going to work on painting pretty much every day for at least 30 minutes. This will either be at work during my lunch break or in the evenings. The goal by the end of the year is to be over 50% and ideally over 75%. After all, bad things happen if you finish your lead pile.

So that’s the plan for the year. I’m looking forward to getting back into the hobbying swing of things and keep making all that content you guys like.