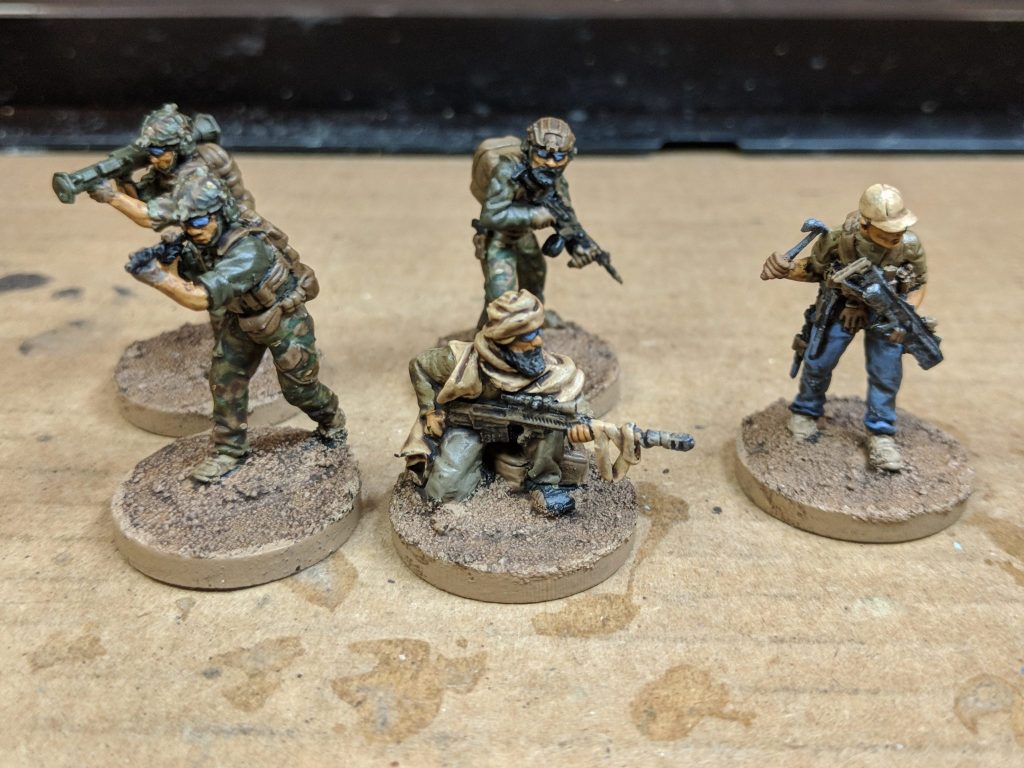 After the massive pile of releases in November, December saw a bit more of a focused set. For all of those who didn’t make it to Crisis, this was our chance to get hold of a set of useful support options for some of the other ranges. I’m always a fan of them going back to add new figures to the current lines rather than just pushing forward – when playing a skirmish game, it’s nice to have multiples of each role so you never end up with duplicates when outfitting your squad. 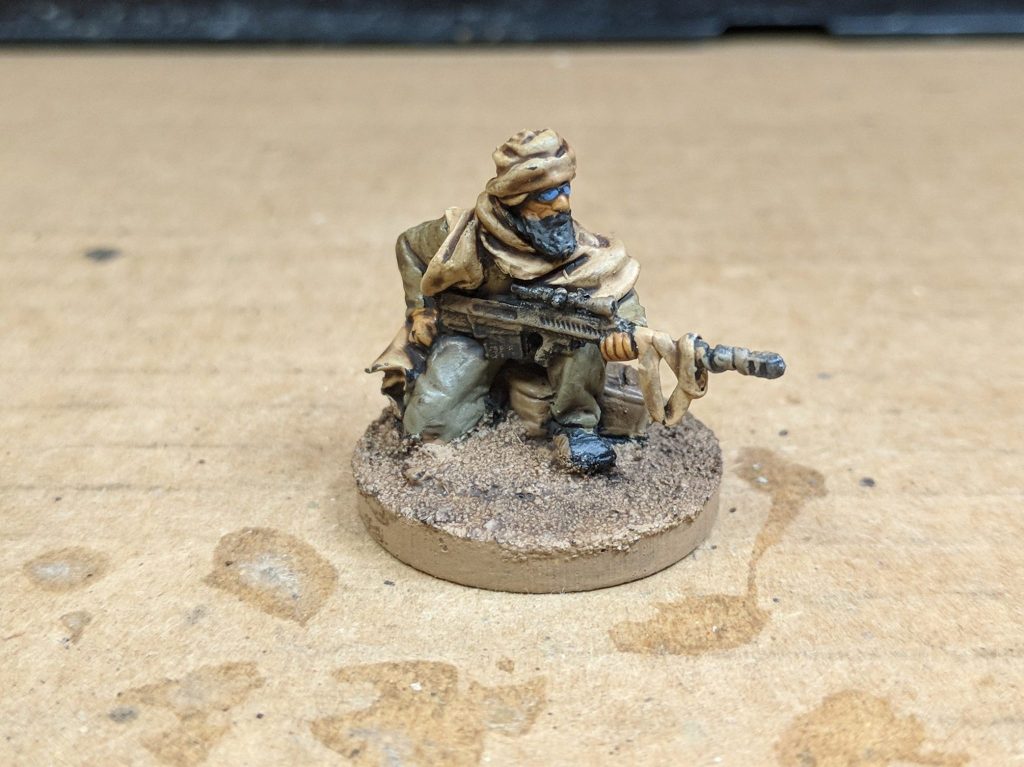 Task Force Nomad has a nice mix of weapons but only has one long-range support (the airburst grenade launcher). Luckily, this guy comes equipped with a XM500 sniper rifle to deliver the killing blow. This bullpup anti-material rifle is an update of the classic M82 and (depending on the profile you choose for it) should be a monster against infantry and light vehicles. In addition to his rifle, he is also sat on his kit bag. Finally, like all Task Force Nomad figures, he’s wearing local clothing to blend in with the crowd. 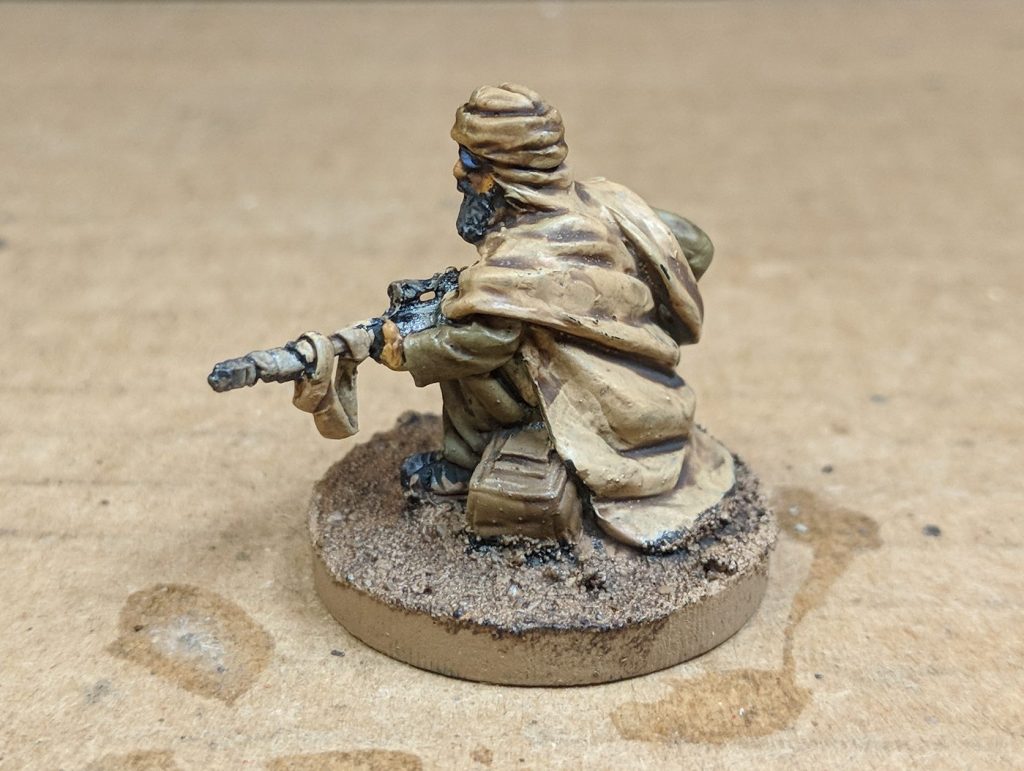 Like the rest of the Task Force Nomad range, this guy is great for playing some more sneaky missions or adding to a militia force as some advisors trying to operate under cover. He is a wonderfully detailed but simple character and will probably be a nightmare for your opponent when he appears on the tabletop. 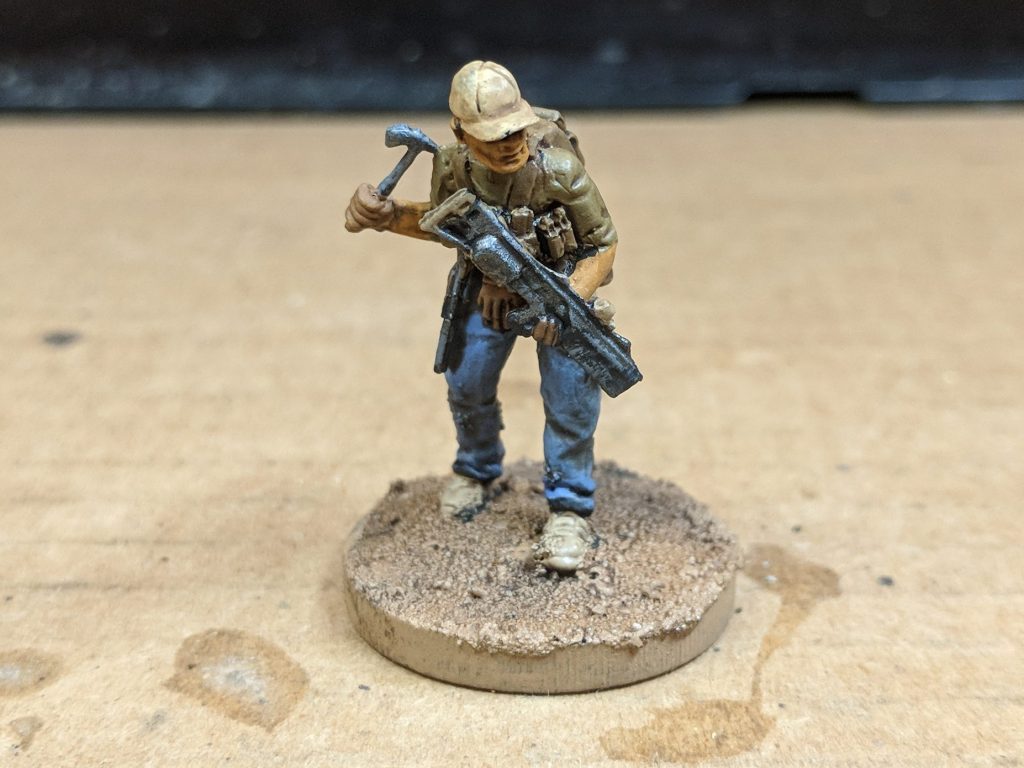 The Tier 1 guys seem to get all the good stuff and I have to say that this model has my favourite combination of gear. As well as his SIG MCX, this guy is also carrying a SIX12 shotgun. This revolver fed shotgun is the newest thing, able to be reconfigured for underslung and standalone use as well as various barrels. This one has an integrally suppressed barrel which should be perfect for when you need to silently infiltrate somewhere. If you want to be a little louder, the operator also has an axe to hand. This is perfect for breaking through windows and shattering locks, as well as cleaving in a few heads. 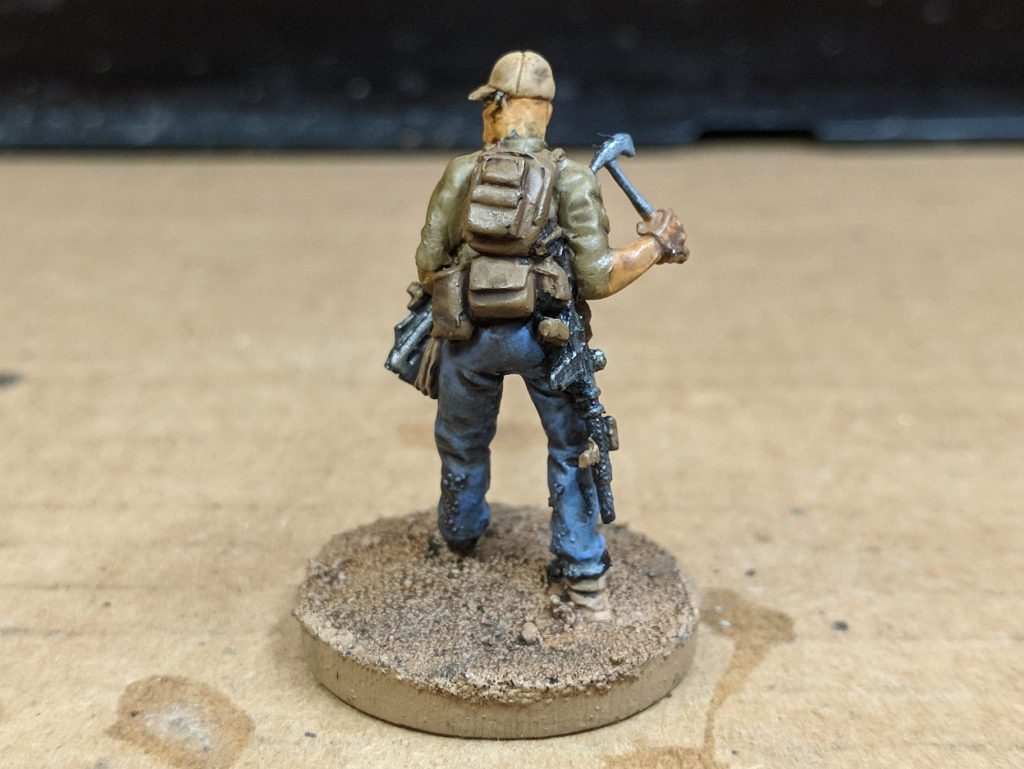 I have to say, this is one of my favourite models that Spectre has done. I’m always a fan of breacher focused figures and the axe/shotgun combination just makes this guy a must buy. It also makes the Tier 1 range a rather useful one to pick up. It now has 12 figures, with a solid core of 7 AR equipped soldiers and everything from SMGs up to multiple grenade launchers. All it needs is a second LMG figure and it would be perfect for people not wanting to go all in with the Task Force Operator figures. The range also now has two shotgun equipped guys, perfect for fighting through urban spaces. 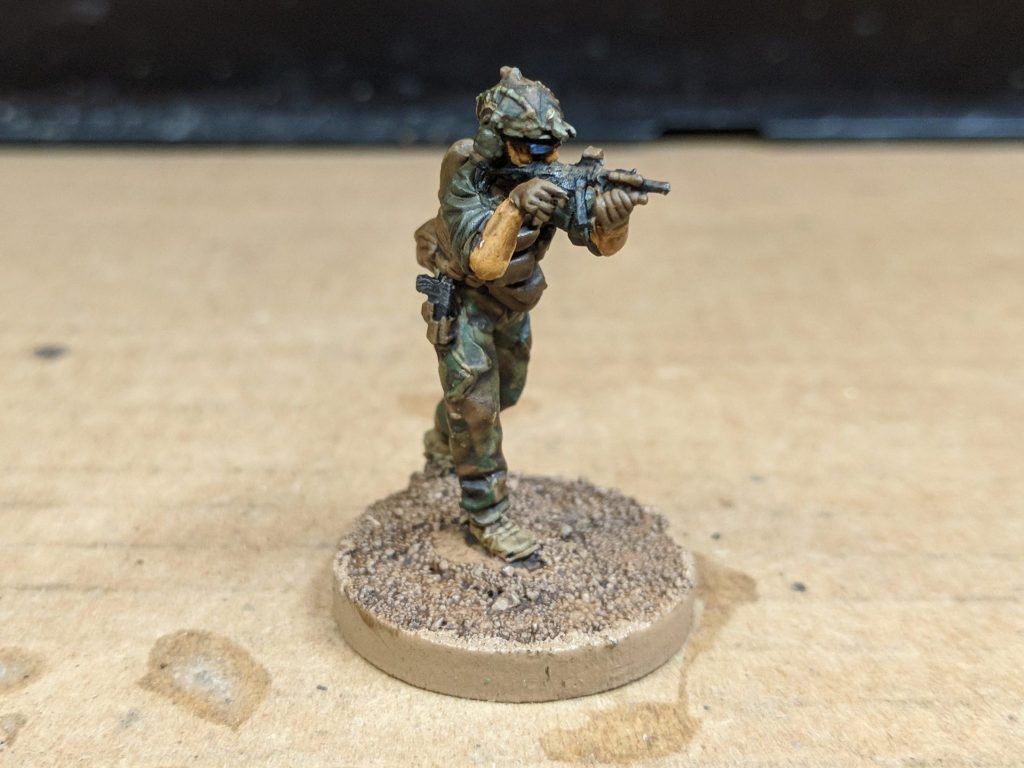 The MP5 is the classic SMG, associated in one of its various forms with possibly every Special Operations Force in the world. That said, the availability of compact carbines and the rise in body armour can mean that it’s a little underpowered, leaving many to upgrade to its younger cousin the MP7. The two packs of SMG figures for the Task Force Operator range have only been using the newest kit so I was a little surprised when I found out that this latest figure was armed with the iconic 9mm subgun. 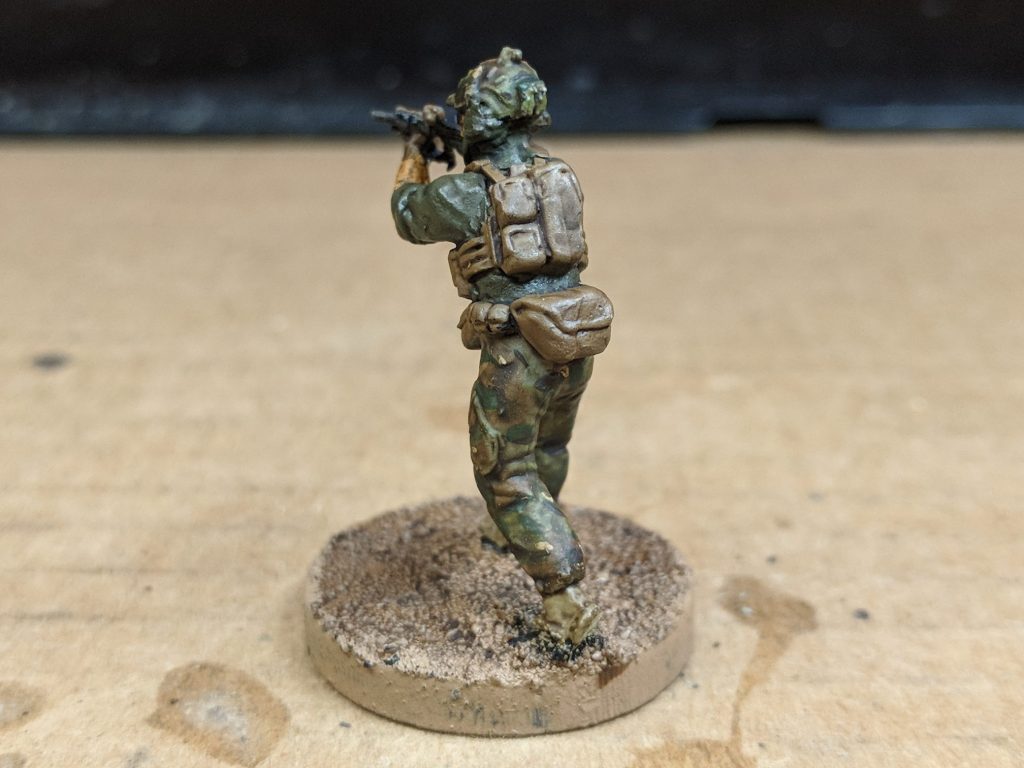 The model is posed in a pretty dynamic way, gun tilted to a 45 degree angle as he moves forward. From looking closely it has a retractable stock, red dot, laser and what appears to be a combined torch/foregrip. The barrel is also long enough to spot that it’s a integrally suppressed version. Overall, a pretty fantastic setup for sweeping rooms quietly. He also has the rest of the required Task Force Operator gear (helmet, sidearm, plate carrier, shades) along with a small assault pack. 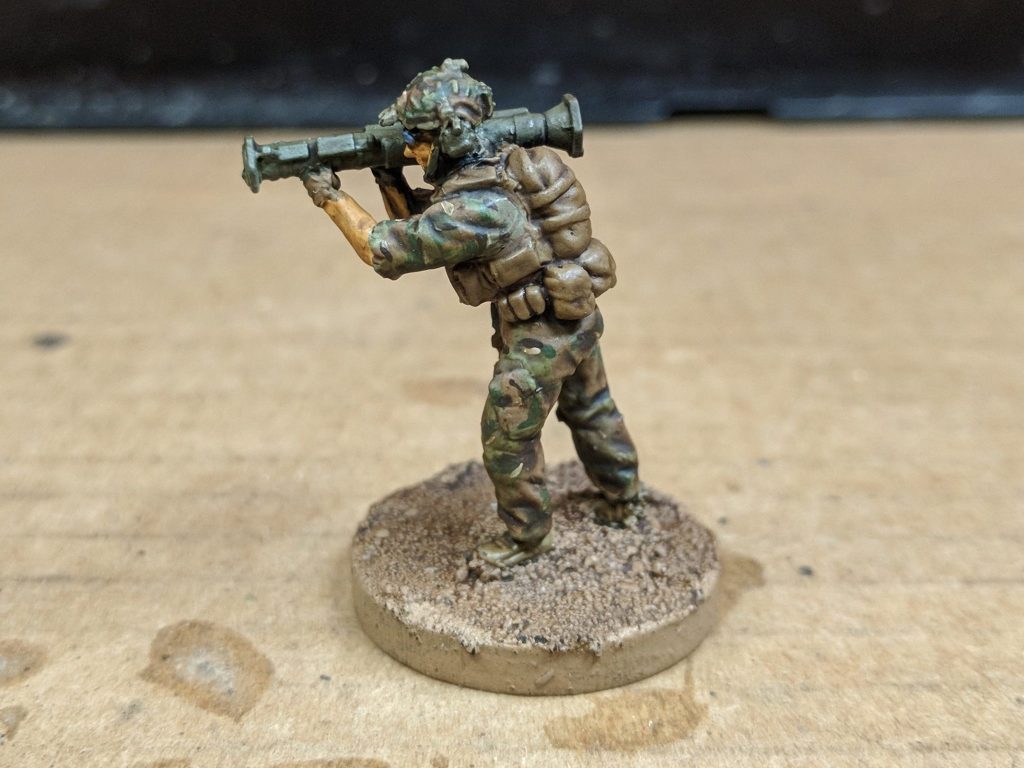 I am a fan of Professionals and Elites taking a Light Anti-Tank weapon in each squad for games of Spectre. Being able to hit back at RPG teams with a taste of their own medicine or knock out vehicles in a single hit is a useful bit of kit in the toolbox.  We’ve already seen the AT4 in the vehicle stowage pack so it was only a matter of time before we actually saw a figure with one. 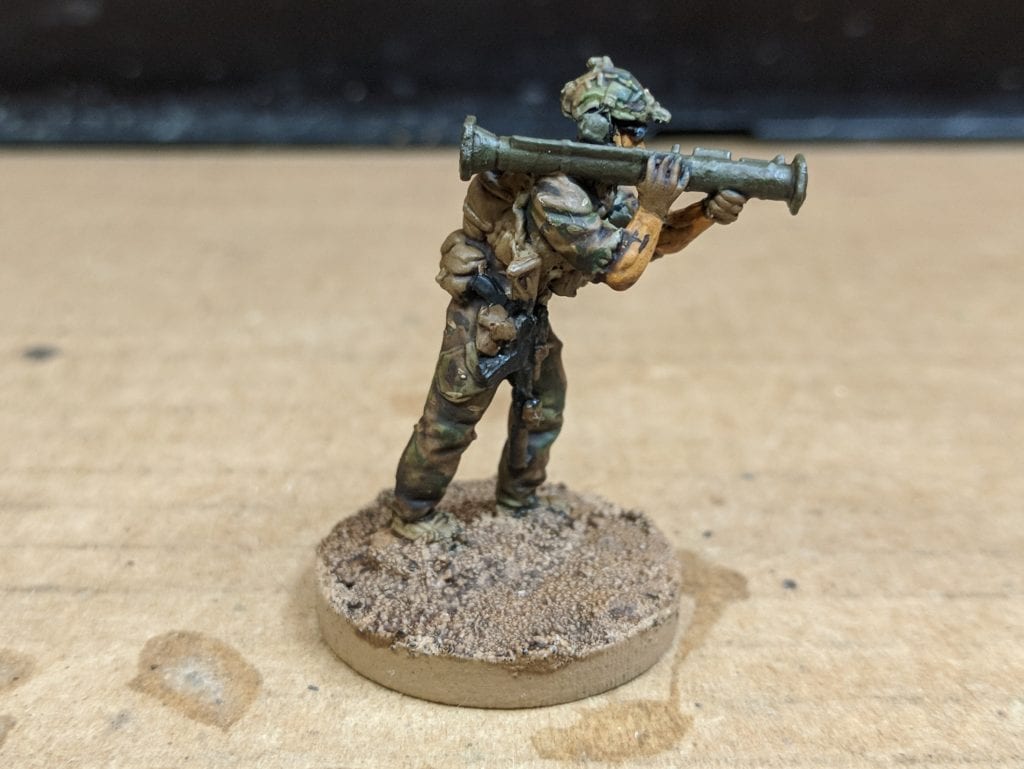 This figure has the AT4 out and ready to fire. He also has a 416 (with magnified red dot, PEQ box and suppressor) slung in front of him. As you’d expect, he is rolling with the required Task Force Operator kit but with a much more complete plate carrier than the SMG operator. Plenty of storage places to carry extra gear.

The other cool thing with this release was that Spectre have released some weapon profiles for two variants of the AT4 which can be found on the page for this item. You can now pick between the HEAT round for blasting tanks or the HE for infantry killing. The HE round loses the Tank Killer ability and drops in lethality but increases the frag distance by 2″ making it much better for groups. Seeing as it’s a single shot weapon, I’d force the player using it to pick the the round before the game begins based on the situation. 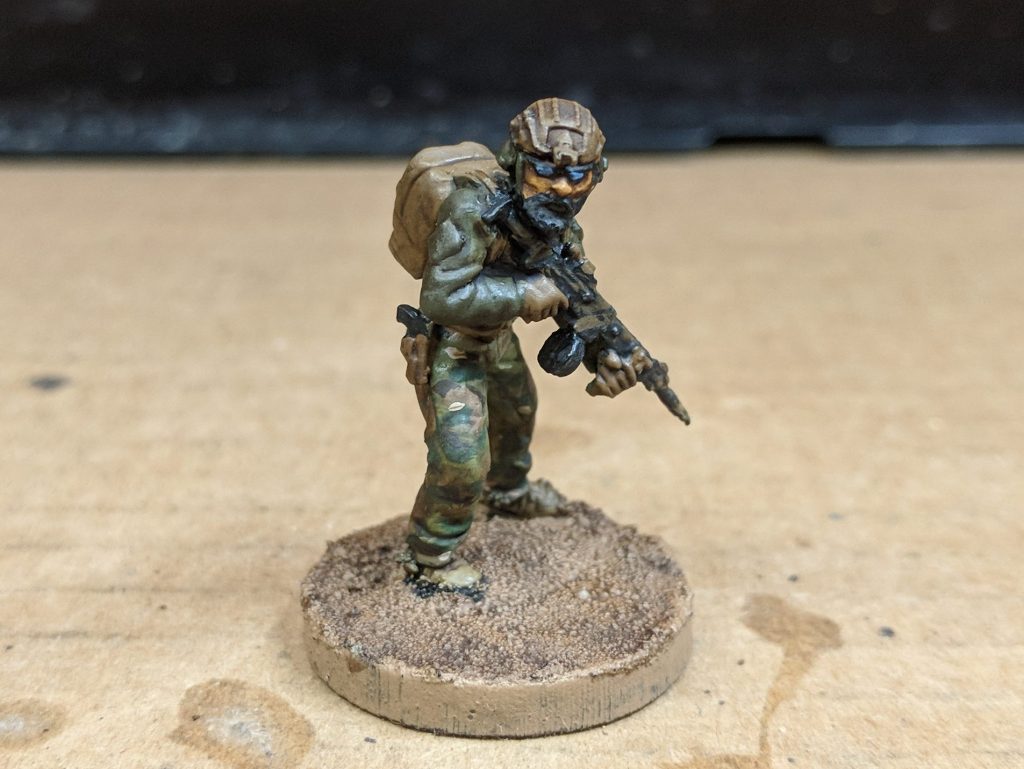 Finally, the last figure from the release is a new operator with a LMG. For anyone who didn’t get the US SOF machine gunners from the early days of Spectre, you’ve been stuck with two LMG models. This guy should help to extend your options when it comes to building your team. What’s really cool is that he isn’t using the usual Minimi derivative but instead the Ultimax Mk5. This gun is considered very accurate for a LMG, with handling closer to an assault rifle and the ability to use a 100 round drum for when things get hot or standard STANAG mags to work with the rest of his team. 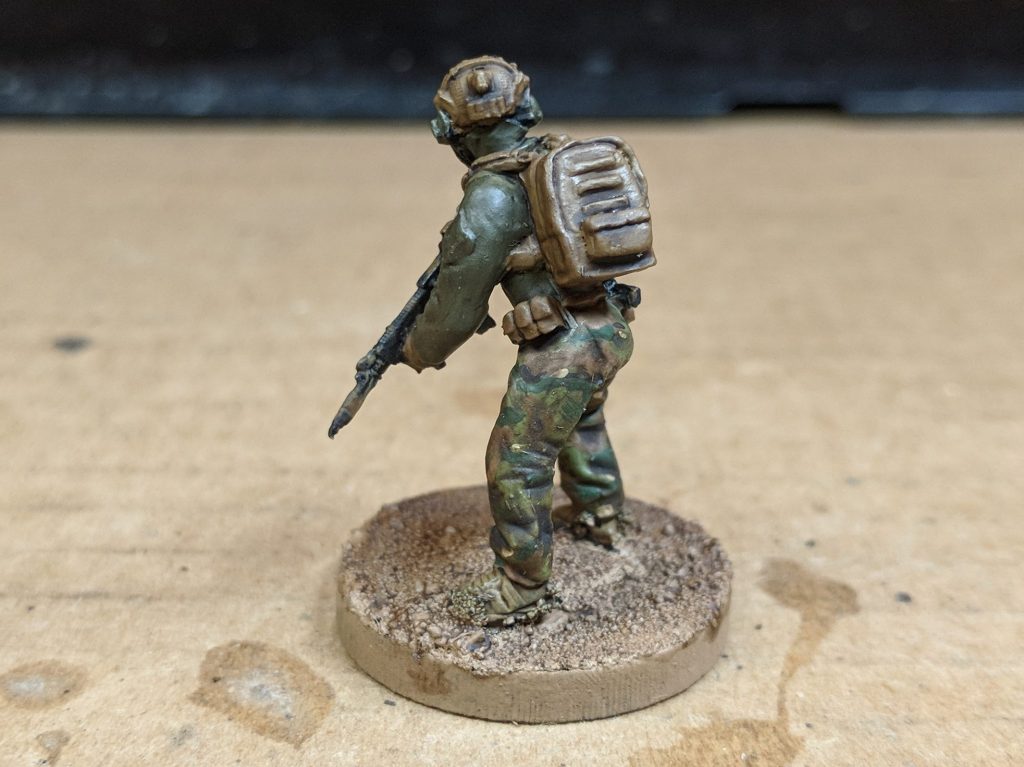 As for the model, he’s got the drum mag attached as well as red dot/magnifier combination and PEQ for laser/light duty. He seems to be wearing a low profile chest rig but is also carrying a huge rucksack just in case the drum runs dry. As well as a pistol he has the most dangerous of weapons – the operator beard. This should make him stand out from the rest of your team. Overall I really like this model. That said, he does have one hell of an awkward painting angle when trying to the underside of his left arm. 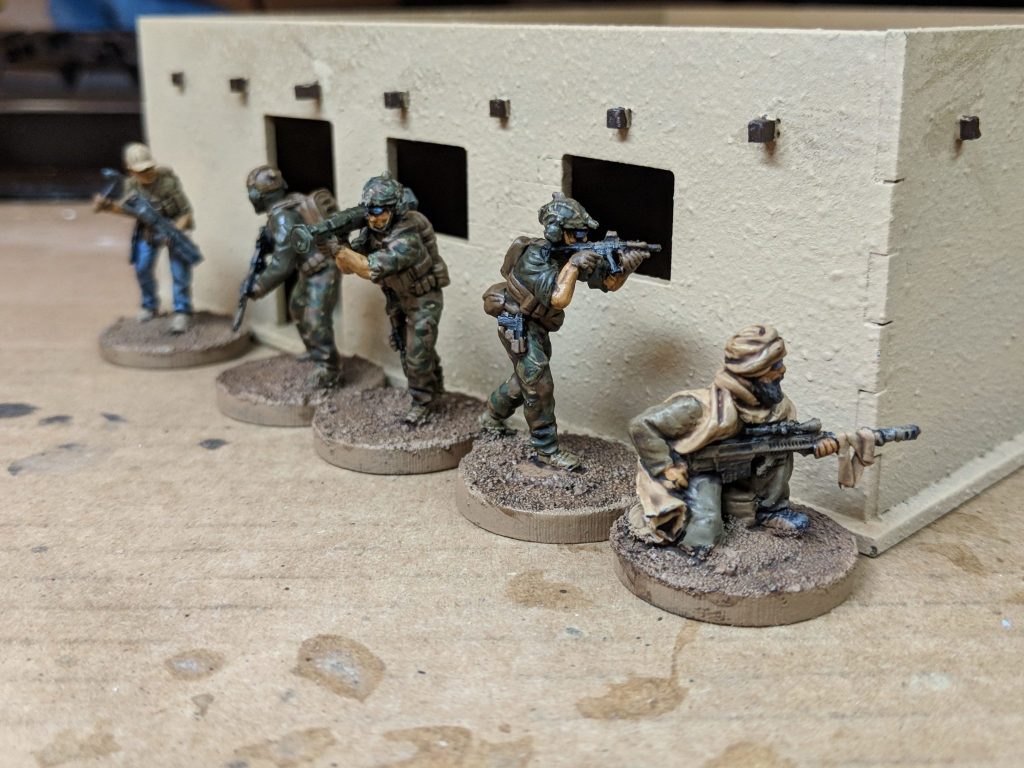