In the last post we took a look at the basics of building a force through role specific teams. In this post, we’ll look at how vehicles can be added to regular forces in order to augment their capabilities and provide new tactics. As in part 1, this article is designed primarily for Spectre Operations but many of the tactics are valid in all modern skirmish games. 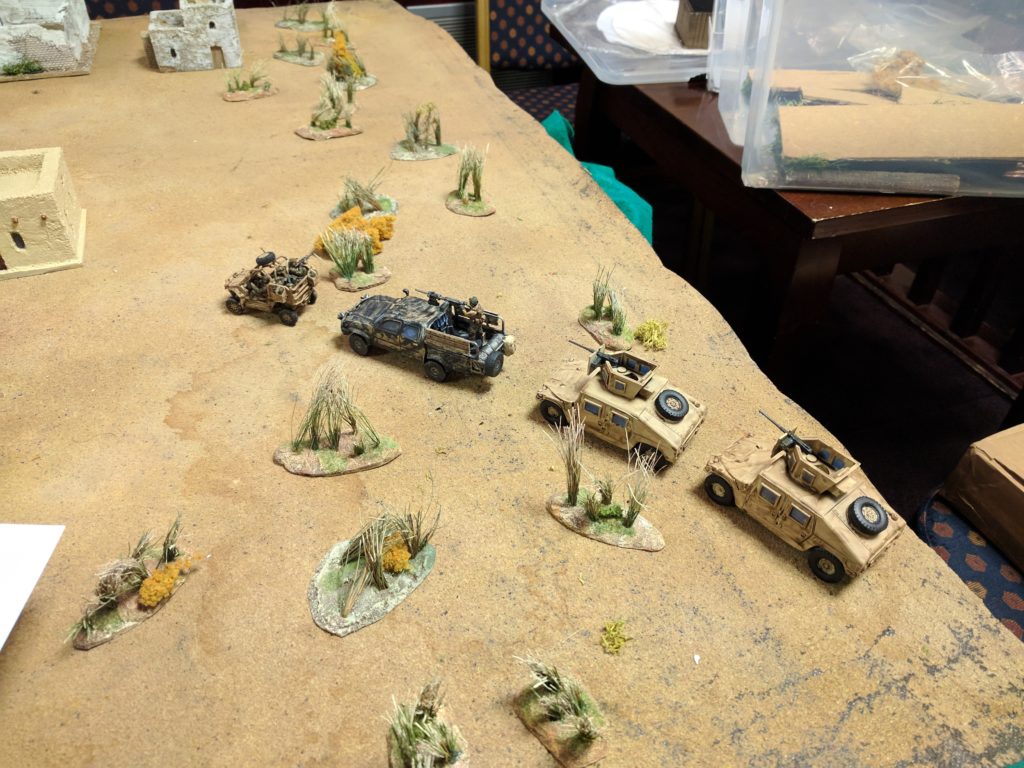 Vehicles are one of those things that players love to get their hands on. Everyone likes rolling out the big guns, using overwhelming firepower to destroy enemy positions while rolling through small arms shots like it was nothing. As a national force, you’ll have access to the widest range of vehicles, covering everything from motorcycles and quad bikes up to main battle tanks. Depending on the situation, adding a vehicle to your force will give you a massive bonus on less well equipped opponents.

The problem is that vehicles, while certainly powerful, are also incredibly vulnerable on the modern battlefield. In WW2 there were limited number of AT weapons available but the advent of anti-tank rocket launchers and HEAT warheads has meant that every infantry fireteam can carry a light anti-tank weapon, often alongside its normal loadout. The RPG-7, the darling of every bad guy, can’t crack a MBT but is easily capable of damaging and destroying medium and light vehicles. Combined with IEDs, this makes approaching urban areas a massive danger. With limited routes, its hard to avoid enemy attacks while the varying elevations give bonuses to troops shooting down into the vehicles.

Another limiting factor is that troops cooped up in a vehicle are not able to act as efficiently as they can on foot. They can’t spread out to avoid frag weapons and (if enclosed) are less effective at helping out with their own weapons. After all, when you roll “passenger compartment takes lethality check” it doesn’t matter if you’re a militiaman or an elite SF operator.

Finally, the bigger vehicles often suffer in places where constricting ROEs are used. A MBT might be able to easily splat a possible enemy position but if it’s got civilians nearby than it’s unable to act effectively.

This is harder article to write than the infantry one as it’s one case where I think using points only rather than a scenario can really break down. It’s very possible for one player to pick a force that is incapable of taking out any of the other player’s force (for example a militia player vs someone who picks two MBTs) and it just turns into one player bugging out in the first turn. Vehicles, along with certain OTAs, makes it blatantly obvious that modern war is not “fair” or balanced. For this reason, setting up the right scenario is key. If player’s are picking their own force, give them the intel they would need to be able to combat each other. Setup objectives that can’t be done from the safety of an AFV – after all, it’s pretty hard to secure buildings while in one.

There are three major aspects to look at with the vehicles: Firepower (how much damage it can deal), Mobility (how fast it can move) and Protection (how it can stay alive) 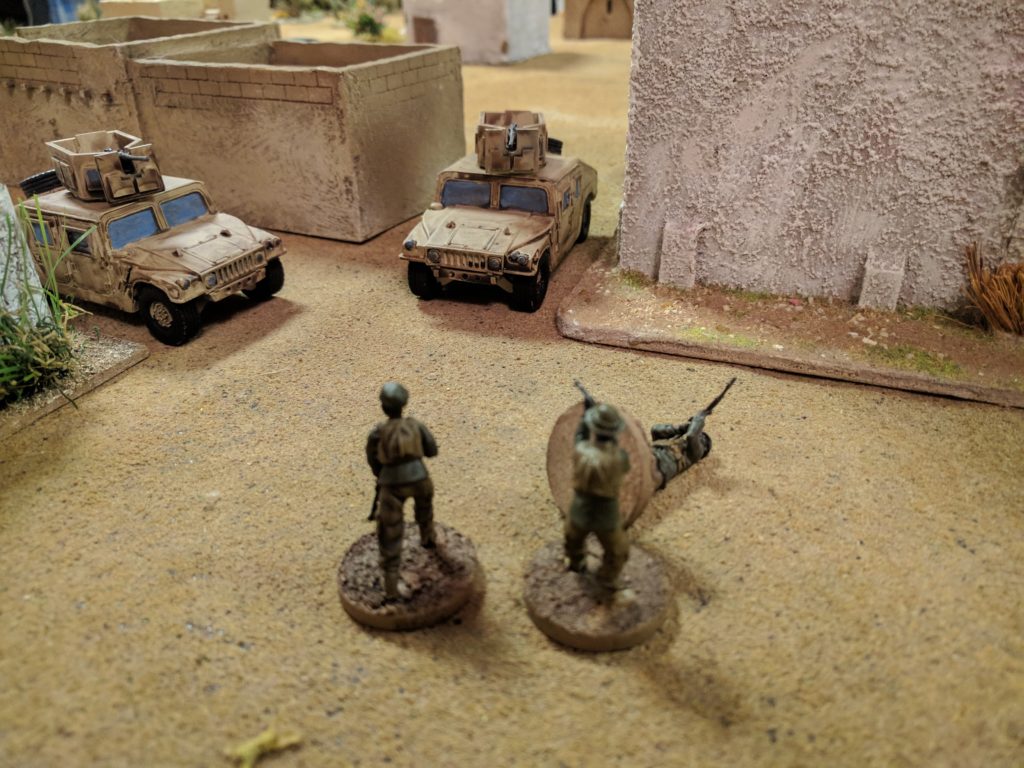 Probably the one people rush to improve first, firepower is a big draw of all motorised platforms. Vehicles can offer two factors over infantry in this regards

One consideration is if the vehicle has the move or fire rule. Having to move slowly will let you keep for the suppression down but risks destruction at the hands of anything you don’t manage to kill.

The final point is firing arcs. Keeping the weapon on target while moving is obviously easier with a turret mount while limited fields of fire require more careful positioning.  Technicals will especially struggle with this as many of the heavier systems (like the TOW or heavier recoilless rifles) can’t shoot forward on the current spectre pickups due to the crew cab. 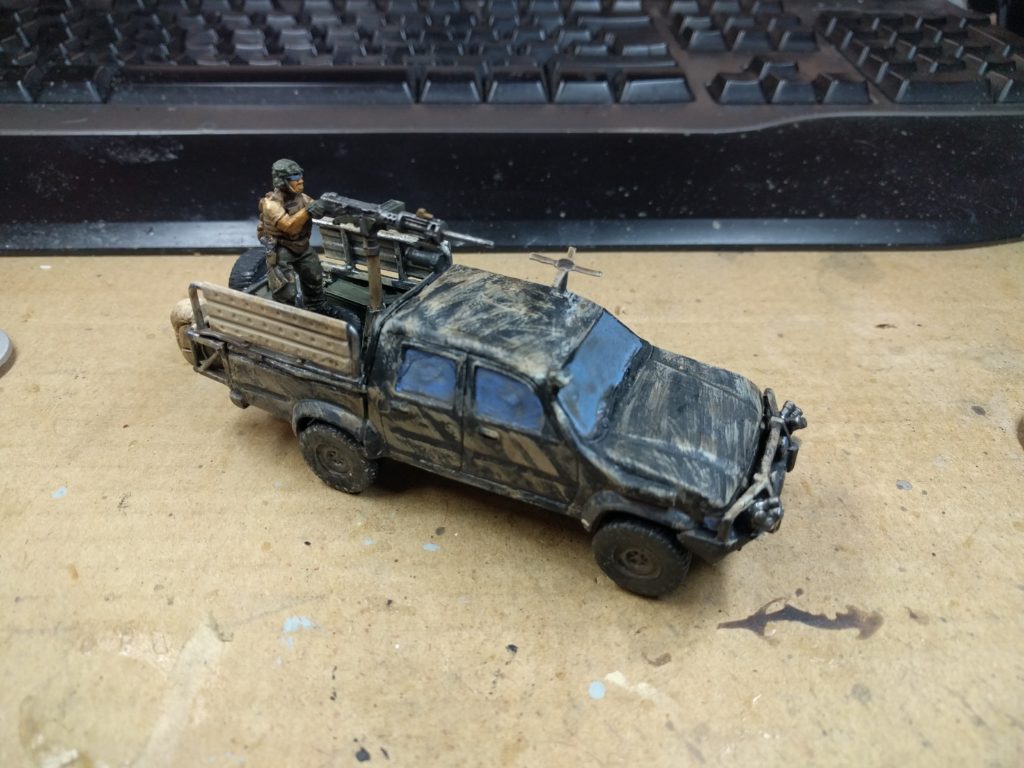 Mobility is somewhere else we can split into two regarding what it offers:

These two aspects combine together to affect how mobile your force is. Although rolling up and discharging troops directly onto the enemy is a bad idea, reducing how much time they spend foot slogging will help to keep them alive and make you more reactive to the enemies movement. 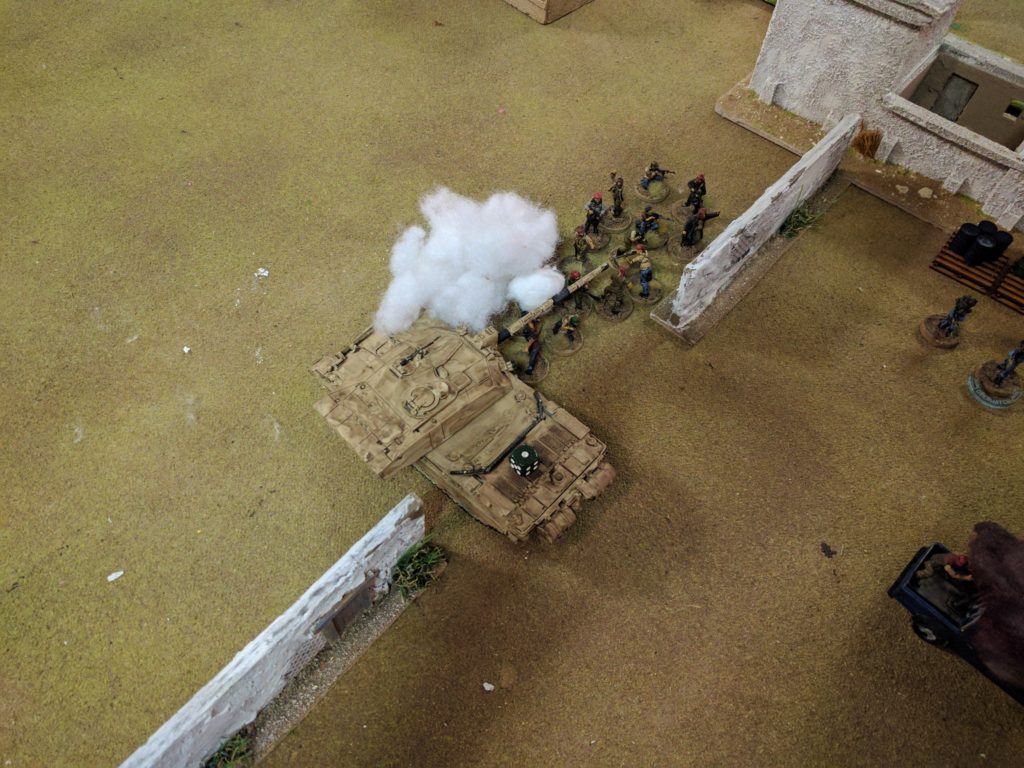 Finally, protection. Mobility can help with this ( after all you can’t hit what you can’t see) but having armour plate between the passenger compartment and the incoming fire helps. Fully armoured vehicles can almost ignore enemy small arms, making the dangers of being caught out in the open less than in an unarmoured vehicle. Even partial armour can help to prevent casualties. As for the poor guys in unarmoured vehicles, you need to either be going fast or sticking to cover.

Another part of protection is its subsystems. These elements can often be forgotten but can help many vehicles feel less like a civilian car and more like the platform they are supposed to represents. Key ones include Run Flats (ignoring M-Kills is a good way to stay alive), MBSGDs (for dropping smoke when under fire) and Gun Shield (excellent for protecting any top gunners).

So that’s all great, but what does that mean for picking a force? 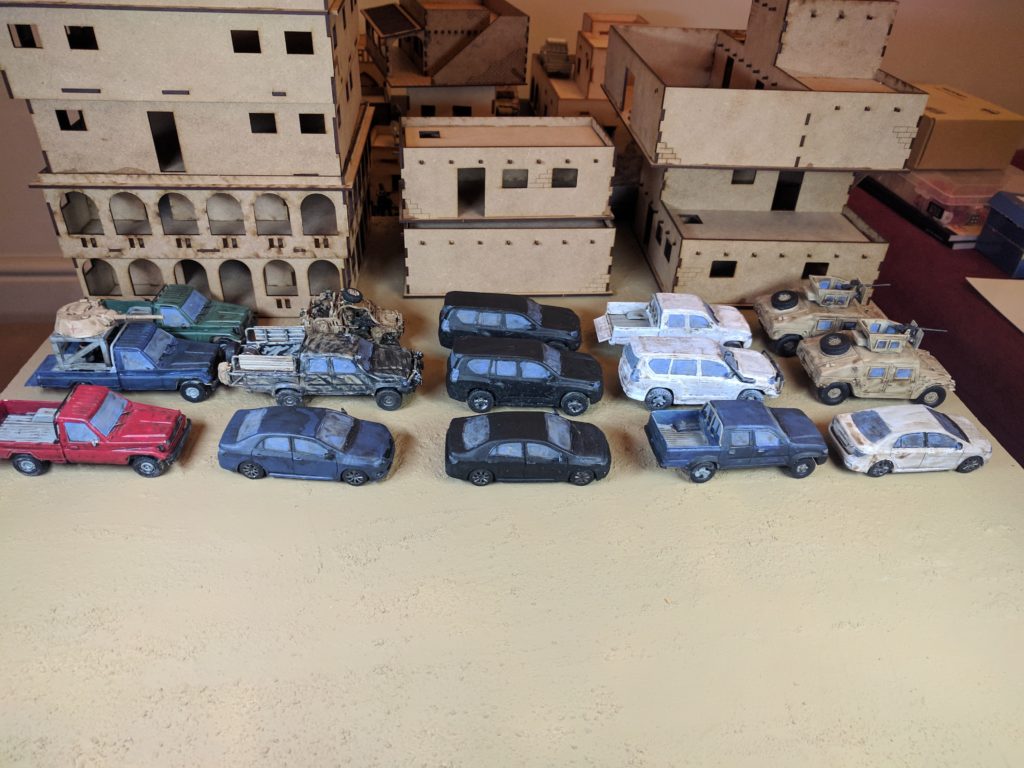 The key principle (as I’ve tried to hammer into you so far) is to look at the mission you’re about to do. Do you need a high speed transport, a weapon platform to sit back and provide overwatch or armoured vehicle to carry the rest of your force onto the objective? What vehicles would your force have available? Would your SF team up in the foothills of the Hindu Kush really have access to a main battle tank or is it more likely it would be a mix of quad bikes, pickups and maybe a GMV?

Once the task is identified, selecting the actual elements will require matching the various archetypes available in the book to what you want to utilise. The various examples will help next to each archetype should help you choose.

Something to consider is looking at real missions and what vehicles are used. As an example, Osprey’s excellent Special Operations Patrol Vehicles includes mention of a four vehicle US ODA convoy arrangement used in 2002-2003 consisting of:

As you can see, this combination is mainly focused on a strategic level (outside the focus of a game of Spectre) but the variety of options can help when building your own team.

I have an additional few pointers to think about when setting vehicle elements up:

That’s it for this article. Next time, we’ll cross the lines and start looking at how picking an OPFOR force is different, how quantity is a quality of it’s own and why you should look very carefully at what type of characters you are using.