So far, nearly all the vehicles I’ve covered on the site have been either of Western origins or some form of technical. However, my regular OPFOR have been needing some vehicles to back them up. Where better to start than the GAZ Tigr, available in 28mm scale from Empress.

The Tigr is a infantry mobility vehicle developed for the Russian military and currently in use with several armed forces around the world. The model looks like its one of the armoured variants, capable of carrying a full squad of infantry through small arms fire and across rough terrain. This version is also armed with both a PKP medium machine gun and a AGS-17 grenade launcher, making it a pretty useful base of fire to cover your advancing troops. 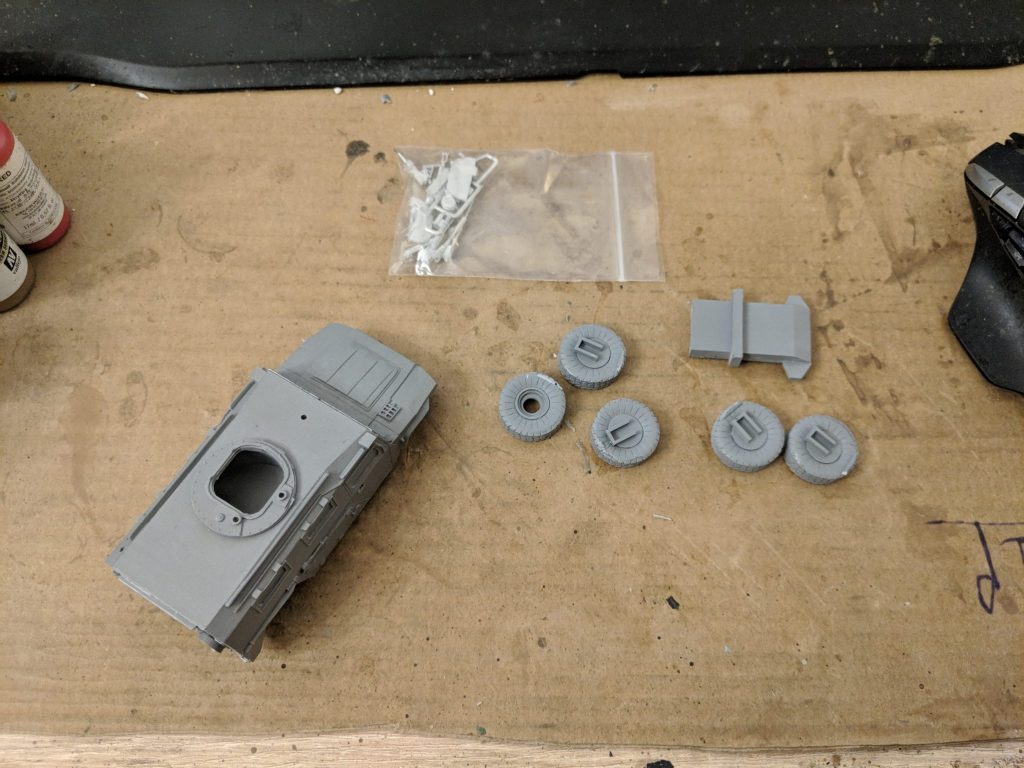 Like nearly all the Empress vehicle kits, the Tigr is a combined resin and metal kit. The body, front bumper, turret ring and tyres are all resin while the finer details (like hatches, weapons and lights) are the usual white metal. There was a small amount of cleanup to do on the resin parts, but not more than would be expected for a kit of this type 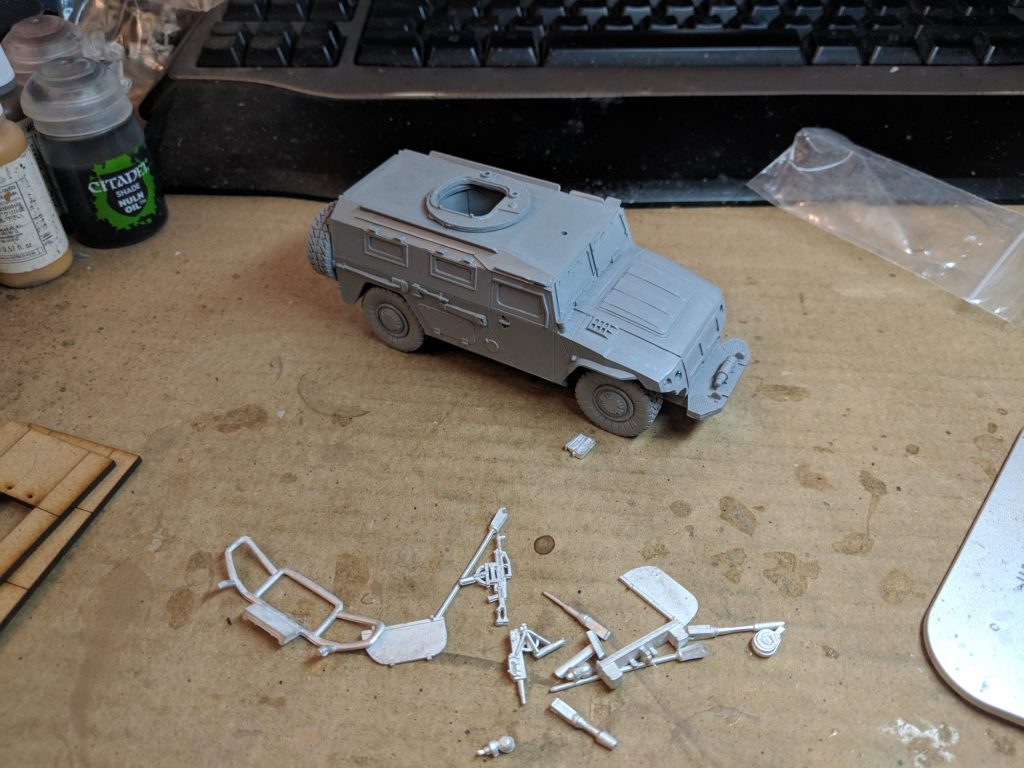 Construction is simple – the bumper section slides easily into the slot at the front of the vehicle. Once done, the wheels can then be added; these fit both on the four struts and on the rear spare wheel mount. From here it’s simply a case of adding the various metal detail elements. The turret setup with the hatches is one place to carefully look at so I recommend dry fitting everything. If you want to go for a command version rather than a infantry carrier, the kit comes with a whole array of antennas to make it stand out. 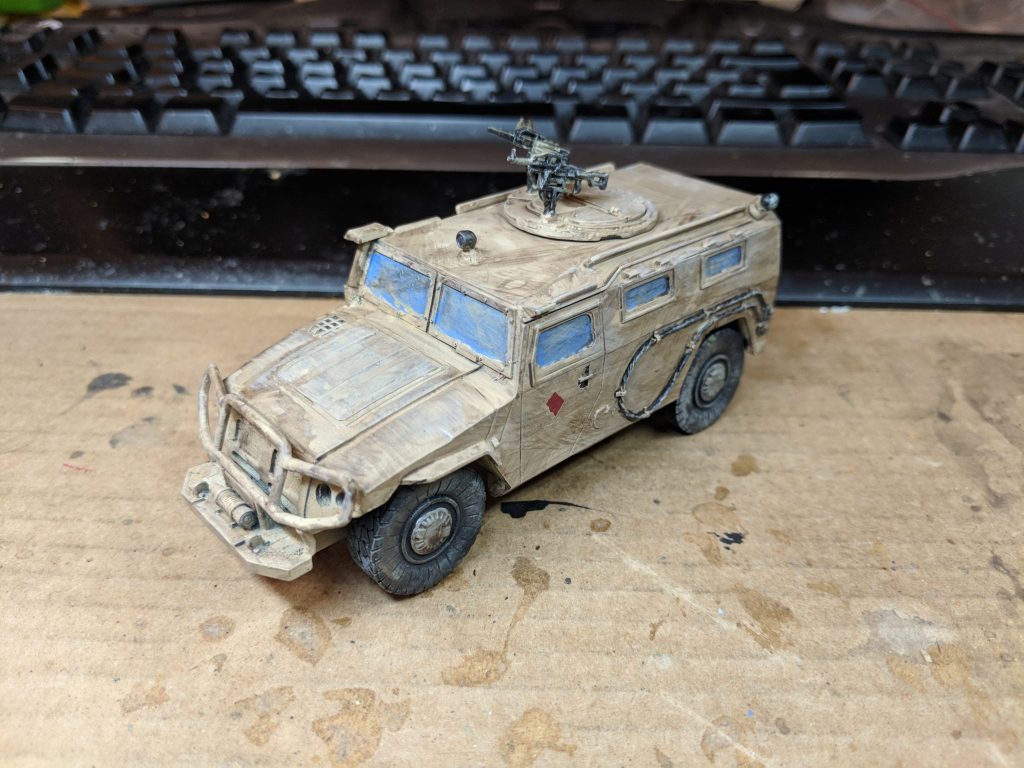 As always, I hate painting vehicles. However, the Tigr was relatively quick to paint thanks to the level of detail on the body. After a desert tan spray, I followed up by quickly painting the tyres, glass and the tools. After that, it was several drybrushes and then a relatively thin wash to finish it off. 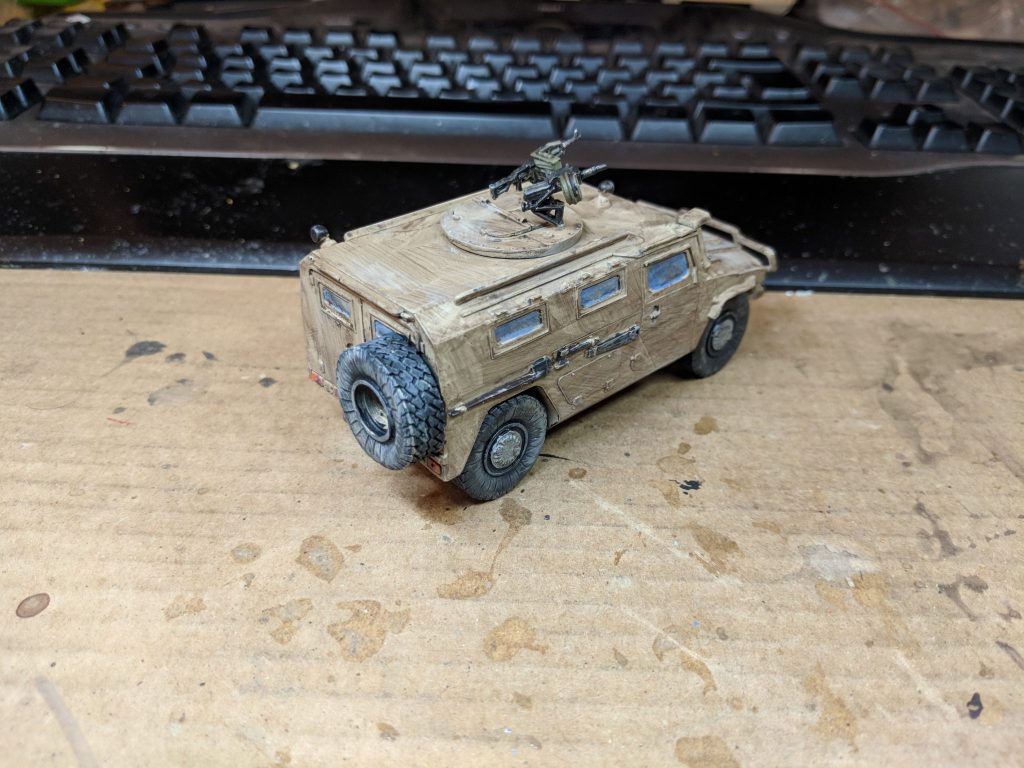 There are some really nice details on the vehicle (such as the tools on the side) which are impressive and really help to make the vehicle look detailed. Apart from the usual mess that I make of the wash, I’m really happy with the final look of this vehicle. 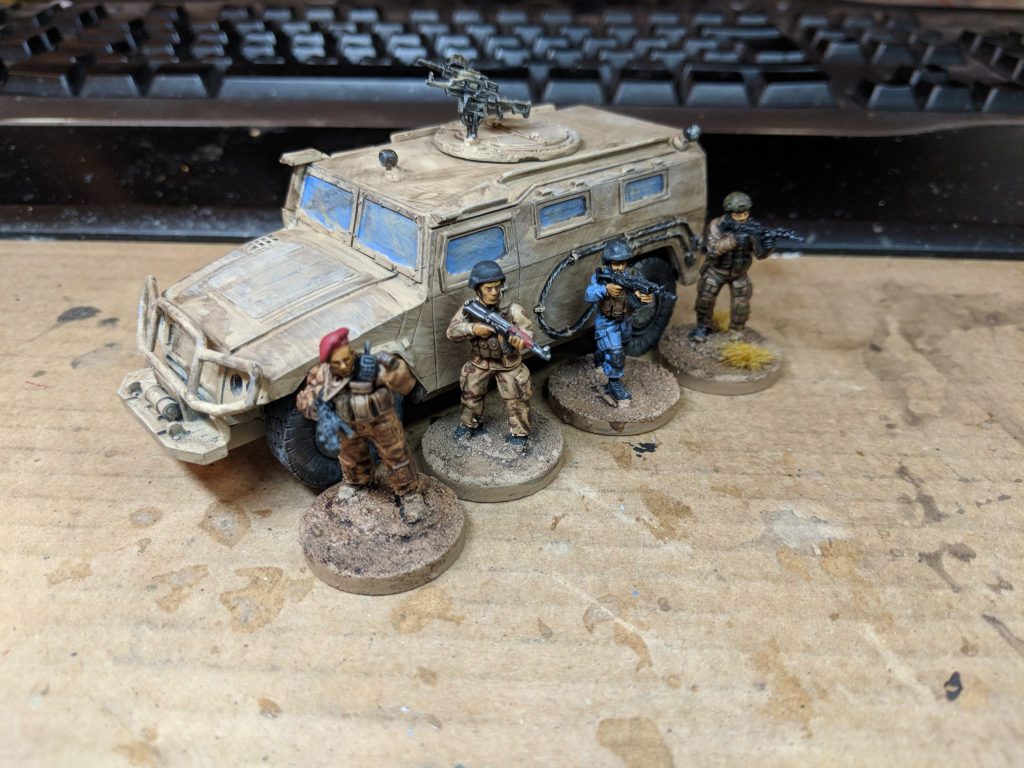 Picture here for scale are a few possible groups that will be using the Tigr in game. From front to back: 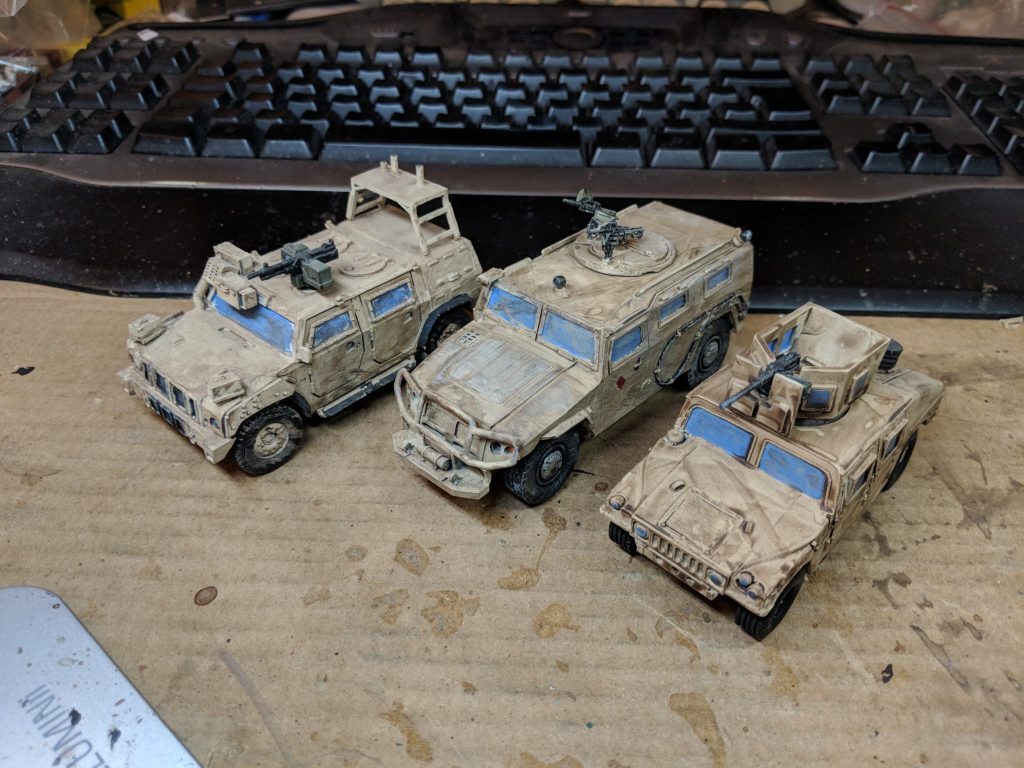 To carry on the comparison here are a few other vehicles alongside it: 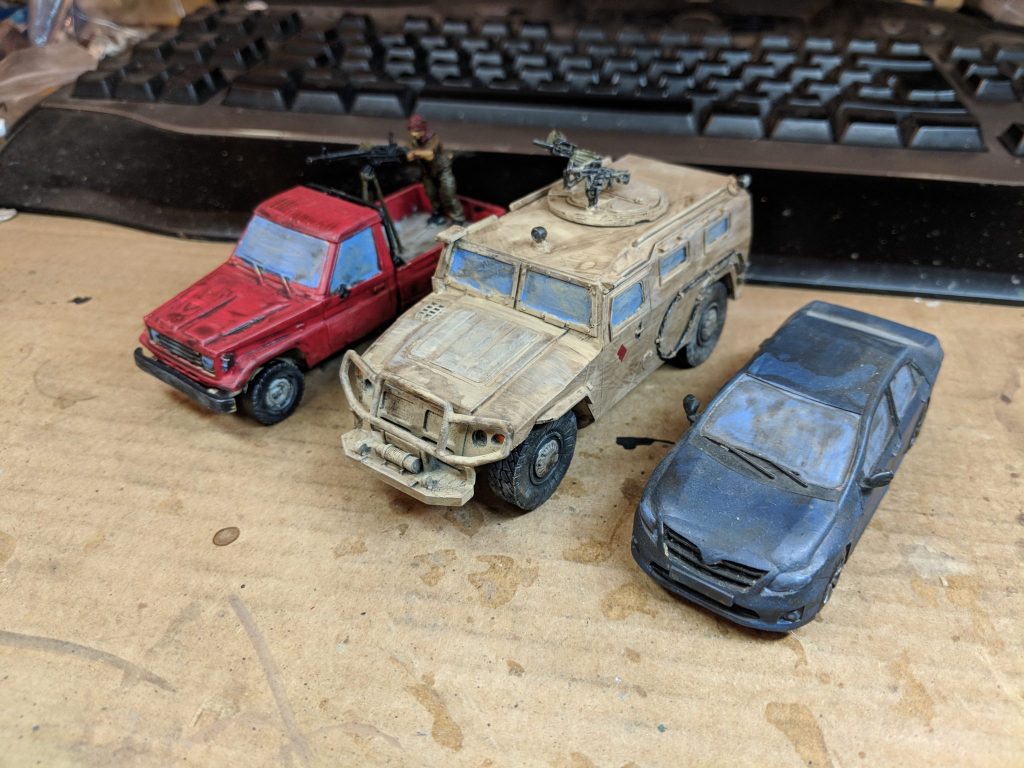 The final comparison is against some more civilian vehicles, both from Spectre. The pickup looks a similar size but much less bulky. The standard car though really shows the difference in size between civilian car and armoured troop carrier.

So my personal thoughts? I love this vehicle. It was beautifully simple to assemble, quick to paint and looks great on the tabletop. It’s also something different from the usual Humvees and BMPs, giving any games using it a nice feel. As well as military use, I think you could assemble it as the local SWAT van of a foreign country if you miss off the heavier weaponry. I’m planning to pick up another couple of these vehicle to carry the entirety of the platoon I currently own. At the very least, I’ll be setting up another one as the command vehicle. Expect to see this on the table dropping off squads of Bazistan Army troops wherever they can be the biggest pain for the other team.

If you’re interested in getting your own vehicle to carry your gang of Russians around, you can find it on the Empress store at http://www.empressminiatures.com/userimages/procart36.htm