Let’s start this Wargaming Week, covering the 5th through to the 11th of March. 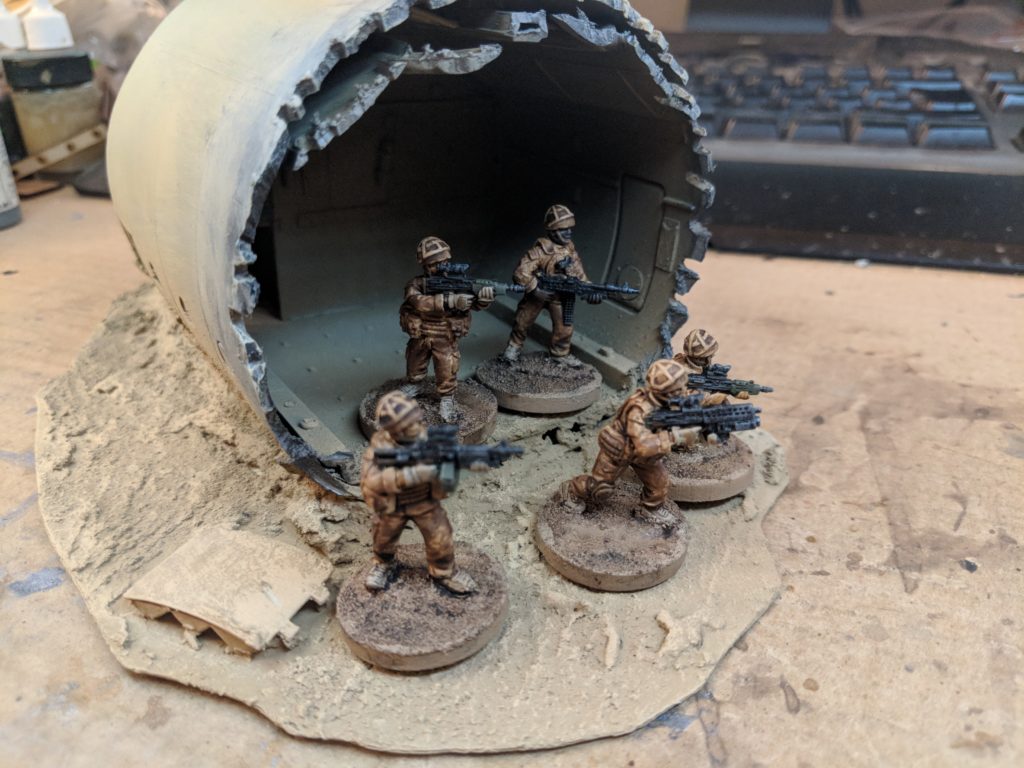 Last week saw two posts, looking at the latest changes to the demo game and then finished off by looking at the new Eureka Modern Brits in Osprey kit. The “two post process” seems to have worked out this time so I’ll be continuing to do that in the future.

As for this week, only one post so you’ll have to wait until Friday.

First up, Empress had a few announcements through the week. There are a few more HLBS releases now in the Empress store but the big news (both in terms of importance and actual size) was showing off a new vehicle for the Modern range. As you can see above, the reveal showed off a 28mm scale T-14 Armata. If you don’t know, this is Russia’s recently revealed super tank which is the first of a new generation of armoured vehicles, with advanced tech and an unmanned turret. This is probably the most ultramodern vehicle you could release and I can see it being a popular seller for people wanting something different supporting their Russian ground forces. According to the announcement, expect it in the next week.

The second news (which ties into purchases section) was that Sarissa have released the new range of Colonial/MENA buildings they teased a few weeks ago. The entire 20mm range is now available in 28mm, including some larger buildings and destroyed versions of all of them. More details below!

And of course after writing the post and about to turn in for the evening, White Dragon Miniatures release their new range. Courage in Contact’s first release is 7 packs of British Infantry, with a vast selection of kit. You can also pick from three different heads (Mk6, Para or Mk7 with Scrim) which should make it easy to assemble cool looking force. As well as the individual packs, there is also a platoon pack option for each helmet type with a slight discount. Interestingly, all the packs are listed as Vehicle Dismounts – this may point to future releases coming equipped with equipment more suited for a foot patrol.

No gaming yet – however, plans have been made for another moderns game on the 22nd so time to write the scenario up. It might involve the subject of this week’s article.

Sarissa’s new stuff. I love this style and I’ve really needed some more “upmarket” and larger buildings for Bazistan. The new range is spot on for what I need and should make the more urban areas feel more interesting and different from the classic “board of Adobes” that the games have mostly been. So I’ve ordered buildings perfect for the marketplace of a district hub. I’m going for the intact ones but I could see picking up the damaged ones for possible future shenanigans.

I’ve also grabbed something from 4Ground. I could say what it is but I don’t want to spoil the surprise. It should be a quite dramatic addition to the tabletop.

As you might have guessed, I’ve also picked up Courage in Contact to take a look at it, I’ve gone for a mix of Para and Mk7 helmets to add some variation to the force. I’m looking forward to taking a look at this new style of figure. 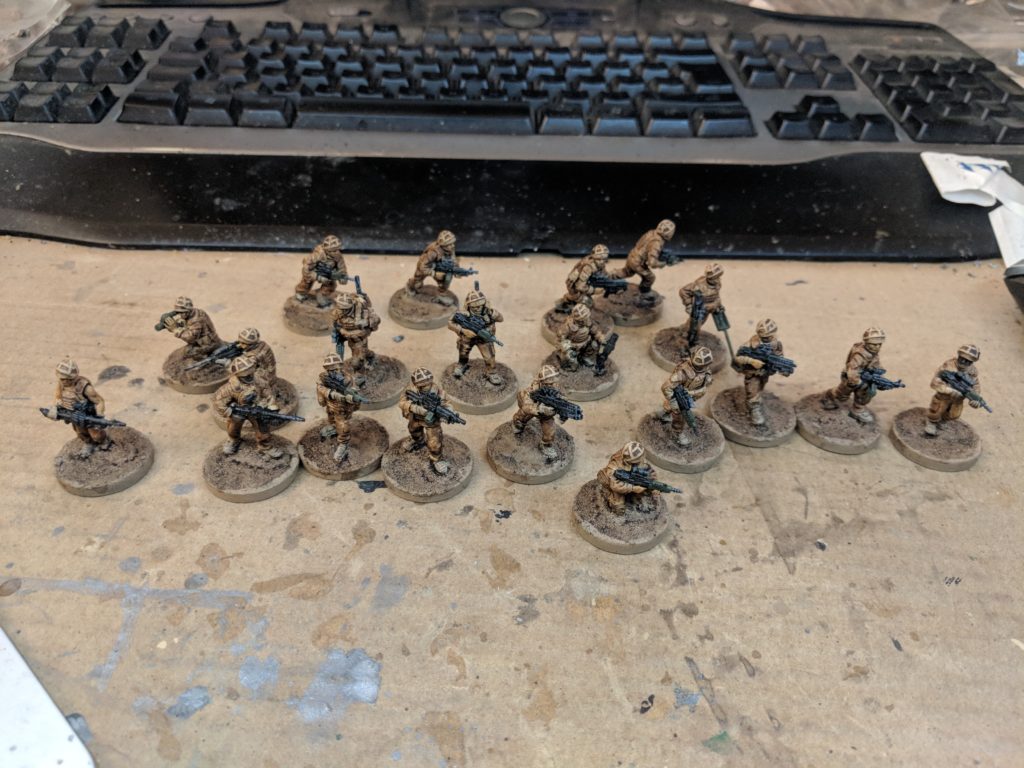 Main thing this week was getting all of the Eureka Brits painted up. I think this is the most I’ve finished in a week. The main reason is painting DDPM – my method is super simple so rather than taking the hours that 20 figures in multicam would take, DDPM (thanks to being only 2 colours) took much less time. Probably the most annoying part was coming back at the end to fine line the helmet netting. These guys are not going to win any painting medals but perfectly show off the style of my collection – finished, on the board and good looking from tabletop height. 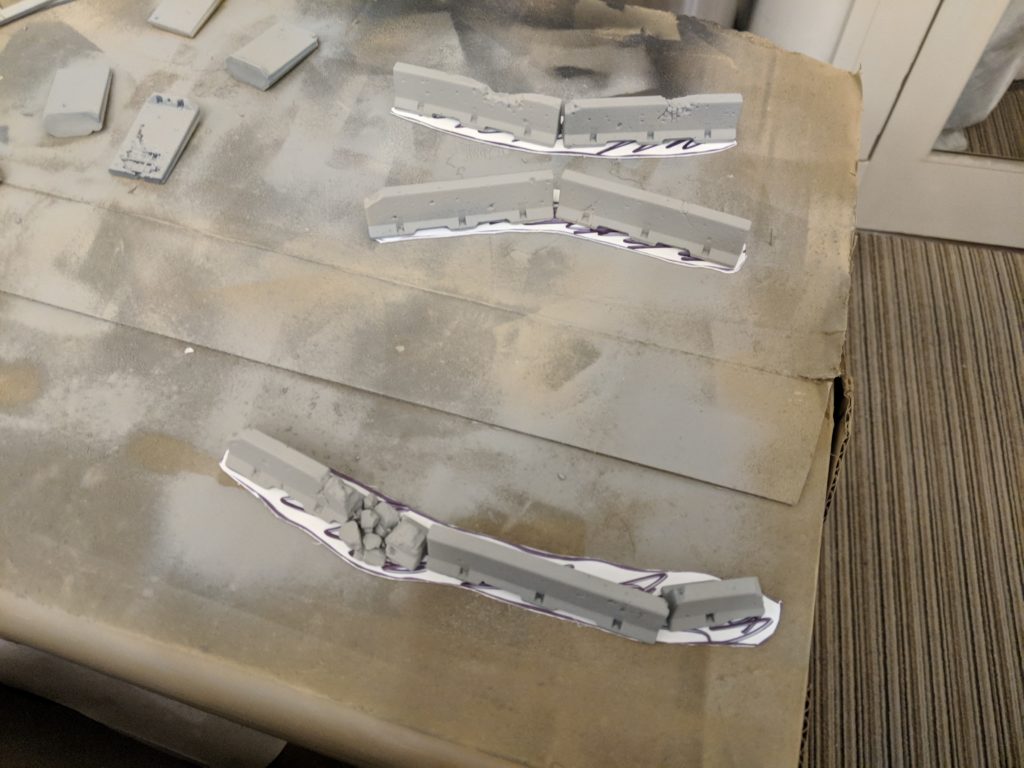 This is still WIP but I’m finally getting round to using Spectre’s range of barriers. I’m always split on how to use small scatter items – keep them loose for the most options or base them to prevent careless hand knocking the board around. After some thinking, I’ve decided to base them. I’m going with the same scheme as my demo board items for the base (plasticard base, polyfilla and sand, spray paint) and the attach the grey painted items on top before drybrushing them both. Once these are done, expect me to base up the taller barricades.

With the White Dragon releases, I’m also looking at my Empress British Army figures which may need repainting for the inevitable Brit Forces comparison.