Sometimes, you buy some practical MDF buildings that are used every game. Things like adobes or french farmhouses or other staples whose presence is almost mandated on every game board. However, once in a while you spot something while surfing the web that cries out as something a little special. True, it may not get used quite as much as the old stand bys. But when it does come out, it’s going to draw eyes to the table. 4Ground’s Pylon is one such item – by literally towering over the table.

This is my first 4Ground kit so I wasn’t 100% on what to expect. It’s a mixture of MDF and greyboard. Both come pre-painted on the sprue, with only minimal cleanup needed (including a bead of paint on the back of the greyboard where it had pooled). Unlike some kits, this one comes with an indepth doubled sided instruction sheet, making it very easy to assembly. In total, it took me about an hour and a half (with breaks for glue to dry) which was pretty impressive. I only had two slight annoyances. The first is having to bend the greyboard around the edges, which lead to multiple cuts going slightly awry. The other are the wire coils – they are only held on by three little bits of glue. Luckily the pack comes with a few spare ones just in case accidents happen.

The fact it’s pre-painted is especially cool, meaning that for once I might actually get an MDF monstrosity on the table relatively quickly (unlike the various warehouses I have lying around). The paint job is good enough to get it on the board, but I’m sure many wargamers will want to spruce it up a little bit – I’m thinking of hitting it with a light drybrush to make it a little more sandy.

One quick note before photos – this is the first item which actually shows off how slanted the floor in my flat so any thing not looking flat is probably more due to the board board not being entirely horizontal. 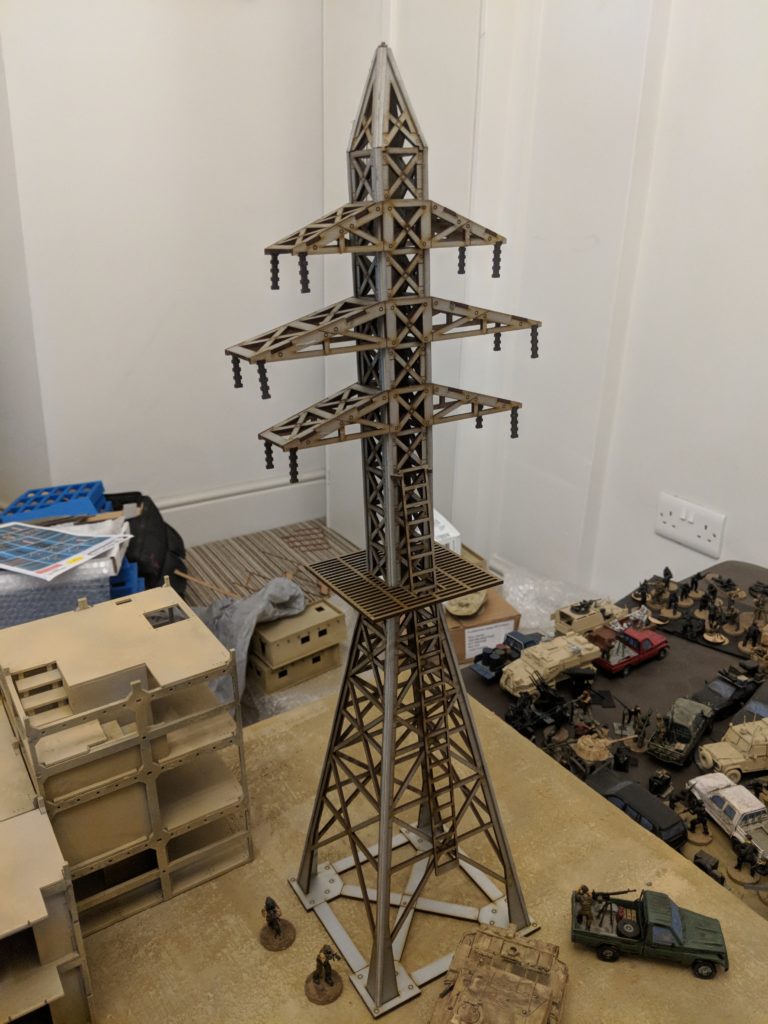 Now it’s finished I can’t get over just how tall it is. It’s very different from someone saying “oh it’s 540mm tall” and actually seeing it assembled. It’s pictured here next to a few small items and it entirely dwarfs the Supreme Littleness buildings. 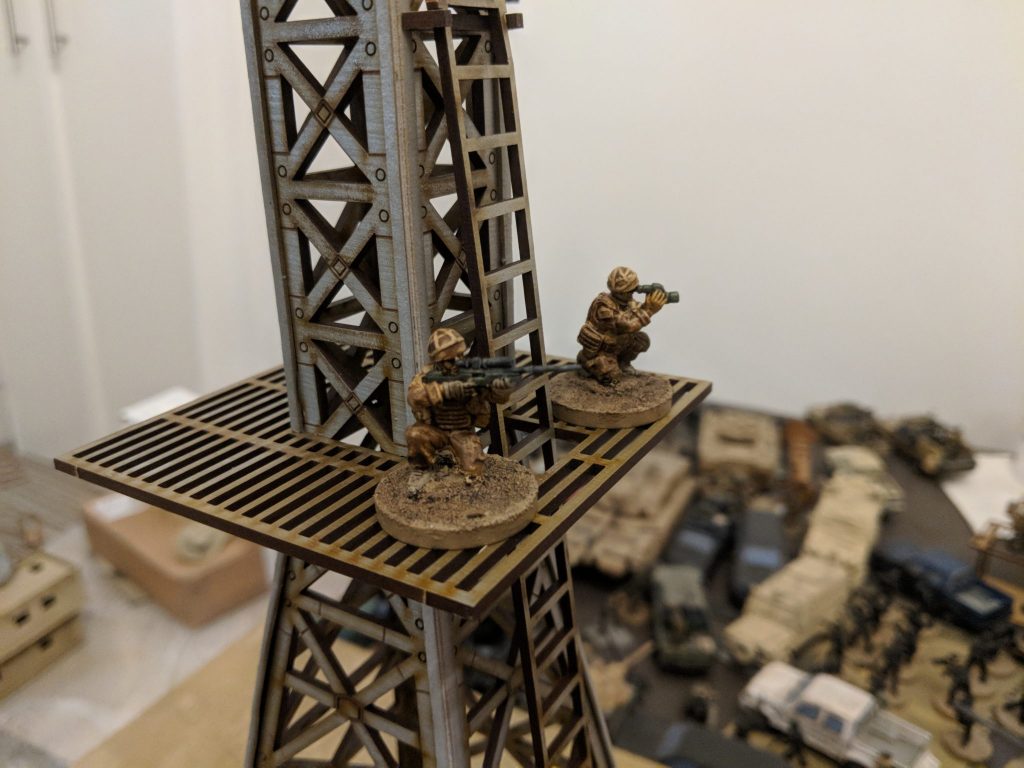 To help make the pylon more than just something to fill up space, it has an inspection platform part of the way up the tower. This can be access by a ladder, which can be removed from it’s holding slot to extend to the floor. It’s safe to assume these guys will be getting the max possible elevation bonus. 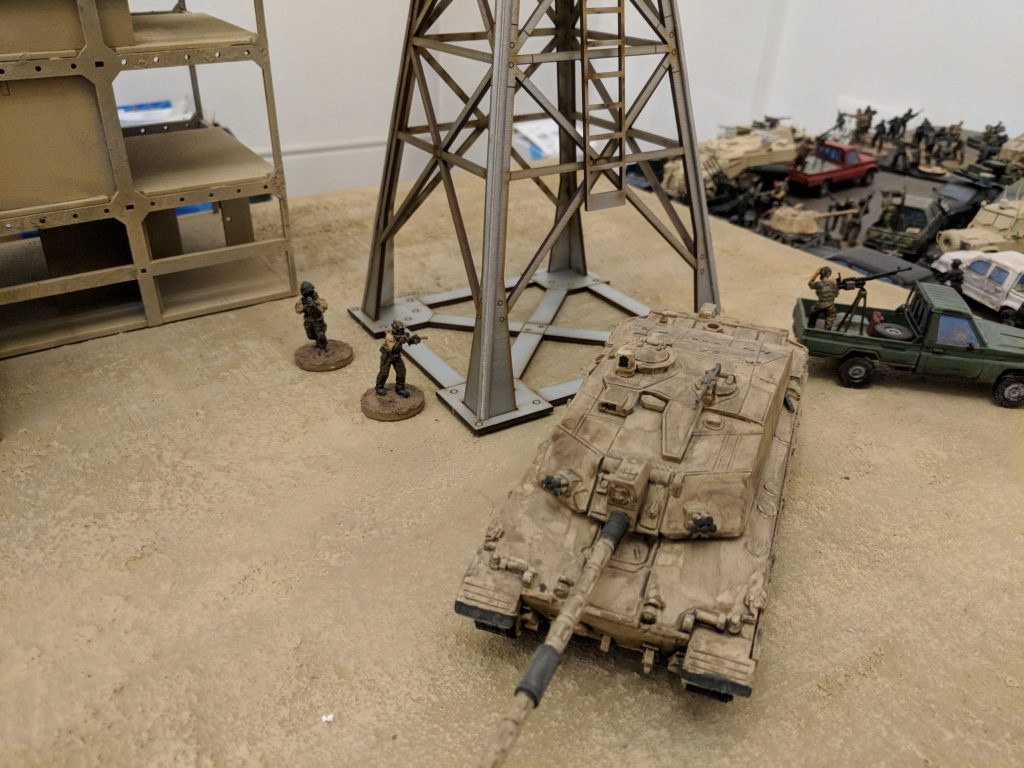 Finally, one last shot to show how even the base is pretty massive. Seriously, it dominates this 2′ x 2′ board. This is one item you definitely will not be buying multiples of, unless you happen to have a truly titanic board.

At the moment, I haven’t glued the two main sections of the pylon together so I can actually easily store the thing. HOWEVER, I recommend drilling some pin holes to add some extra structure to the join. Otherwise, the top part WILL fall off when knocked and it WILL break some of the black elements off. Trust me on this.

I can’t say that everyone should buy one of these things. If you play on a tiny board, it might be a little much. But, if you want to make a desert board look a bit more populated or increase the verticality of you board, I can recommend the pylon. It’s a reasonable price for a lot of MDF and the fact it’s pre-painted shouldn’t worry people too much. That said, it’s really up for you to decide if you want to spend this much on something that won’t get used that often. You can find it on the 4Ground store here.