The line between Sci-fi and Ultramodern for wargamers is sometimes a very thin line. With the rise of drones from things flying high above to smaller ones that fit in the palm of your hand, it’s highly likely at some point you’ll want to add a robot with a machine gun to your game (similar to the SWORDS robot), especially if you’ve played the Somalia level from Medal of Honour Warfighter or cleared a way to the helipad in Modern Warfare 3. Luckily, Evil Bear Wargames, whose range includes a selection of items from modern day to science fiction (such as the Spudies and Hardsuits), have two types of Close Support Drones ready to fill your need for some robotic support. 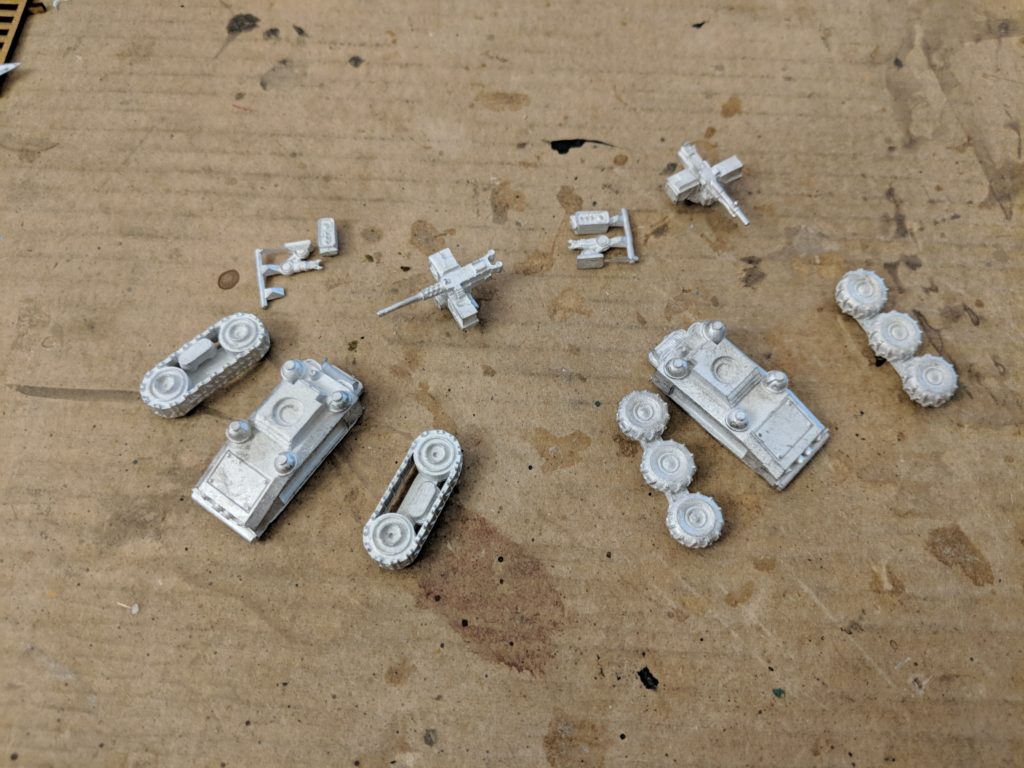 The two packs I ordered arrived in a single blister. Both vehicles are basically the same, sharing the same core unit and accessories. The main changes are the locomotion system and mounted weapons. As you can see, the entire kit is metal. One feature I particularly like about construction is the fact that both the chassis and weapon have enough space to fit in rare earth magnet in without any tweaking. This lets you easily switch between guns if you own both versions (or the Evil Bear Panther PMV which uses the same weapons). I’ve haven’t used them here but the pack includes two other little details, a control box and manipulating arm. These would let you theme the bots for a different purpose or for marking who has control of them in game. 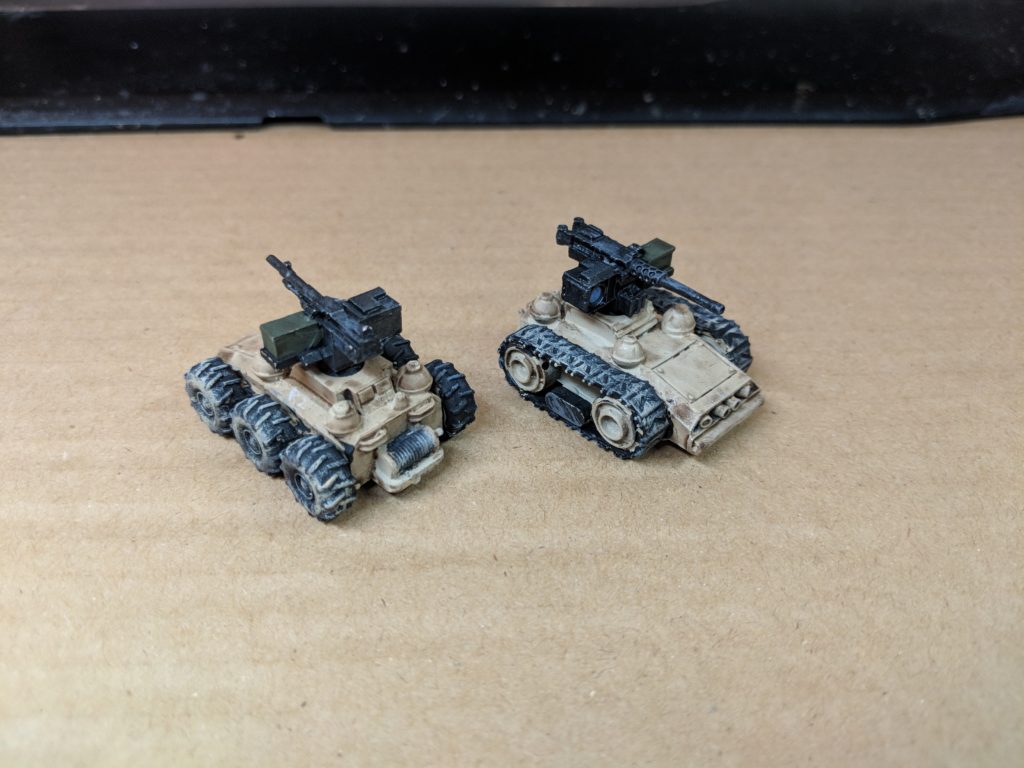 Here are both vehicles painted up. This view also shows the vehicle in more detail, including the cool winch at the back of the chass 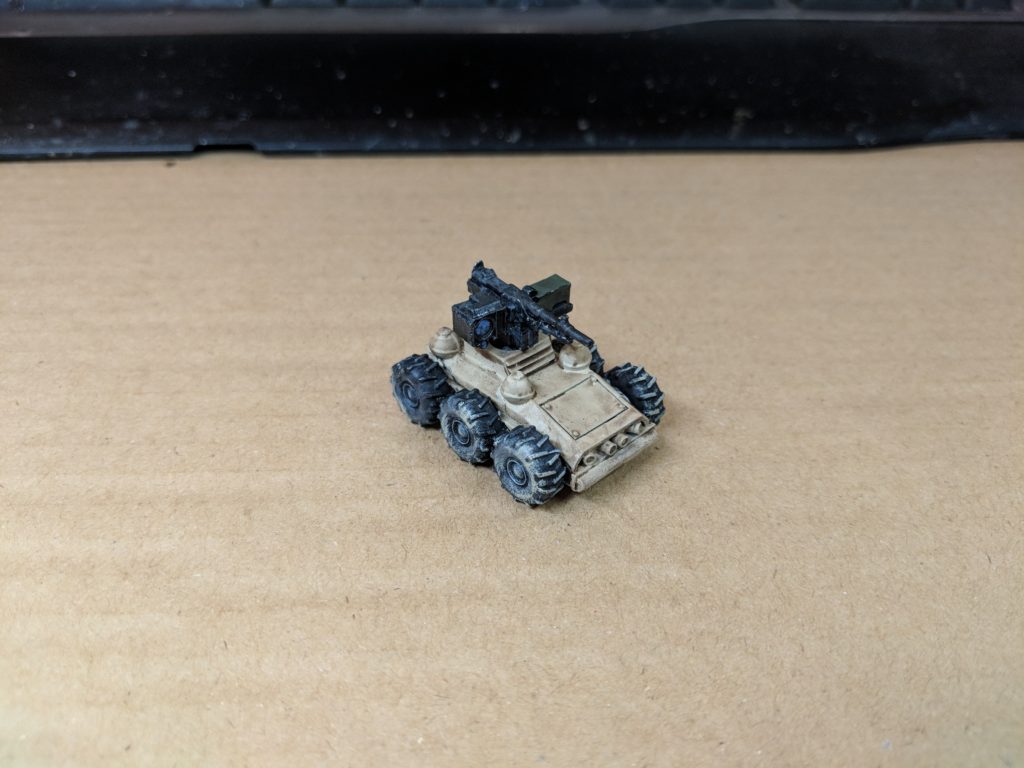 So what are the two variants? The first is the Medium Close Support Drone. This guy is armed with a GPMG and is equipped with wheels for moving around at speed. 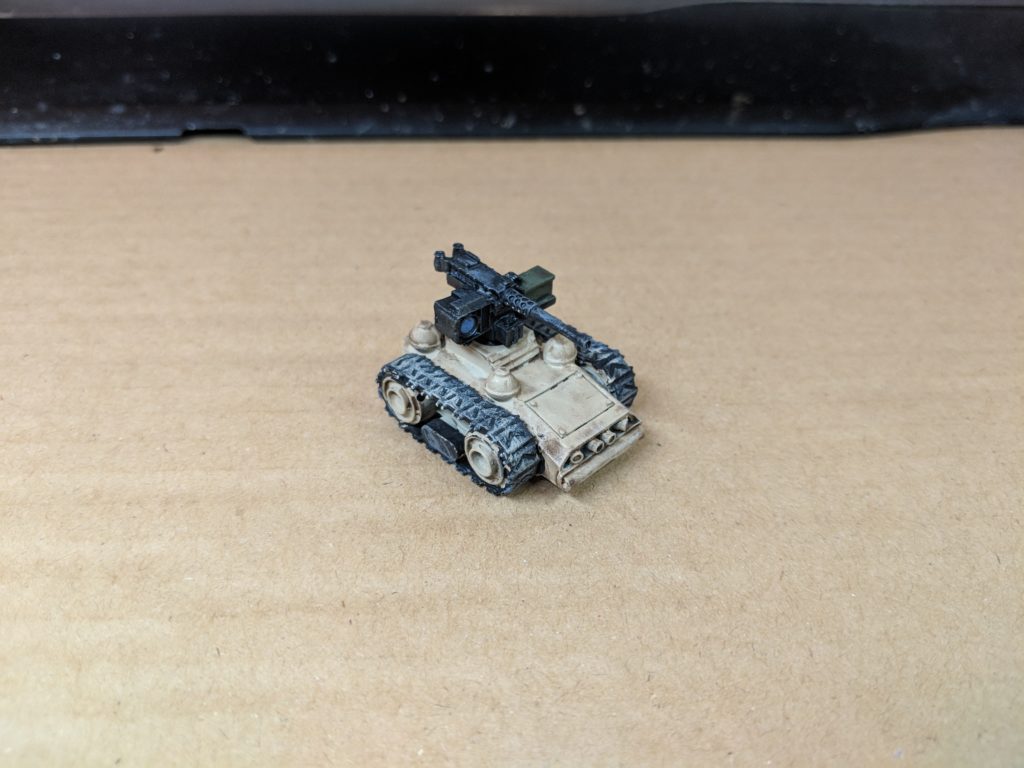 The other is the Heavy Close Support Drone, equipped with tracks and mounting a M2 .50cal. This should be a nasty surprise when it appears and starts rolling around. 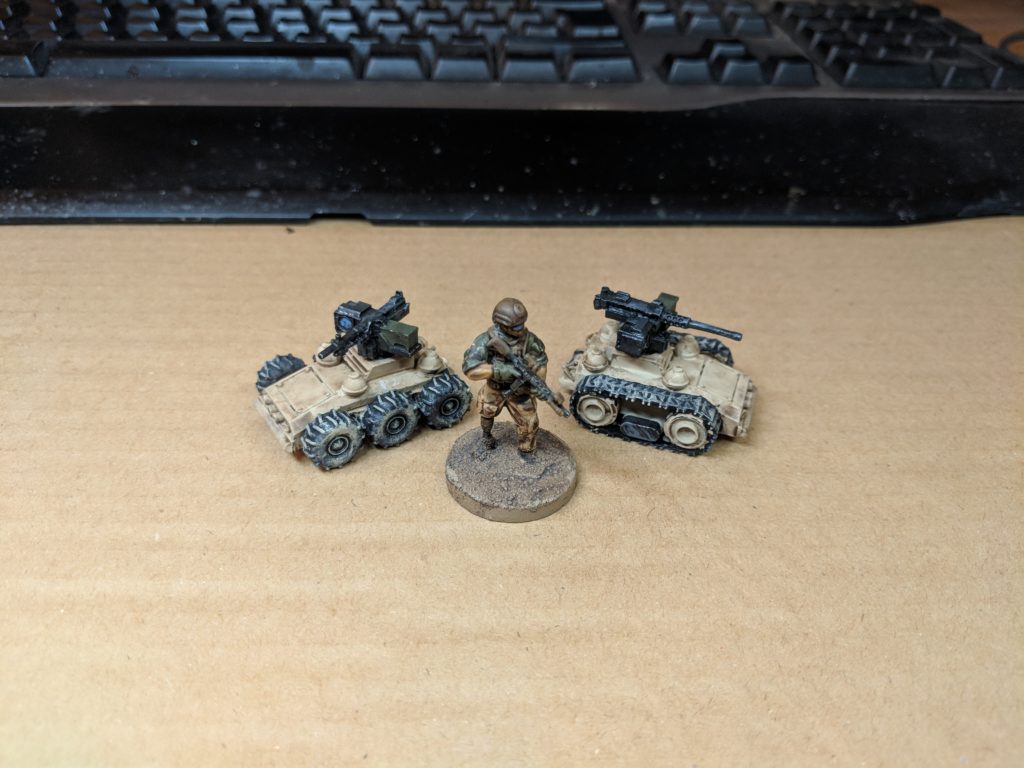 As you can see here, when compared to an Empress SF figure, these drone are certainly not man portable. They also won’t fit everywhere that people can get to, so more difficult terrain will prove to be an issue for them. 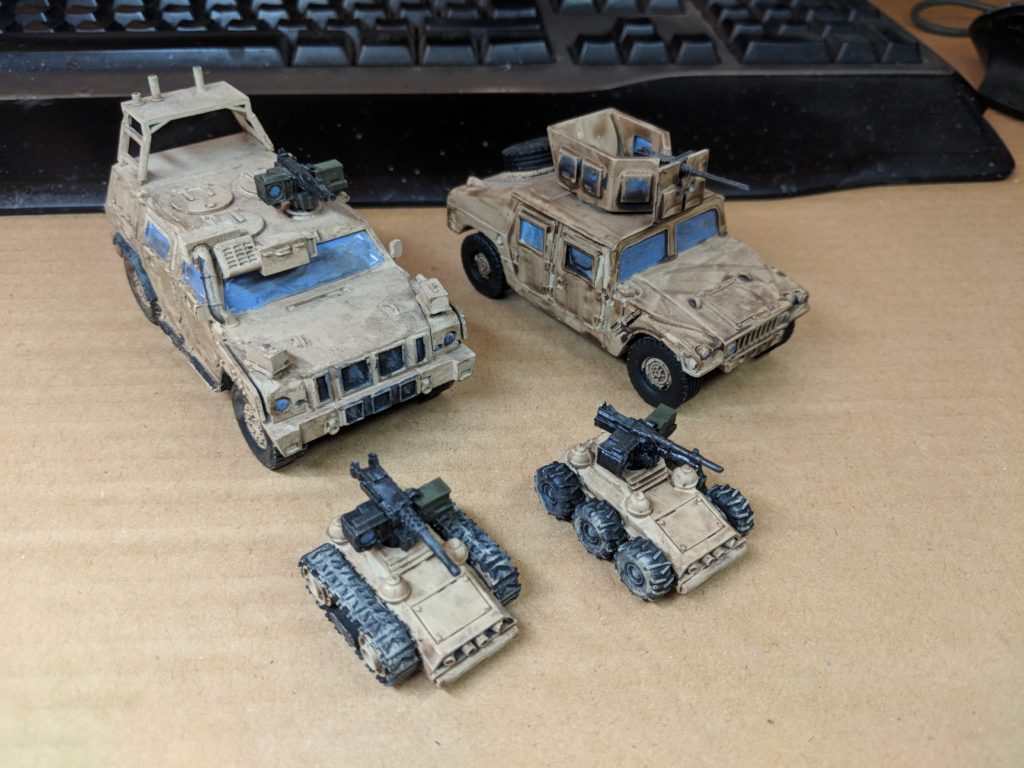 However, compared to vehicles these drones provide some serious firepower in a much smaller package. The photo shows both drones in comparison to the Panther from Evil Bear Wargames and one of Empress’s Humvees. 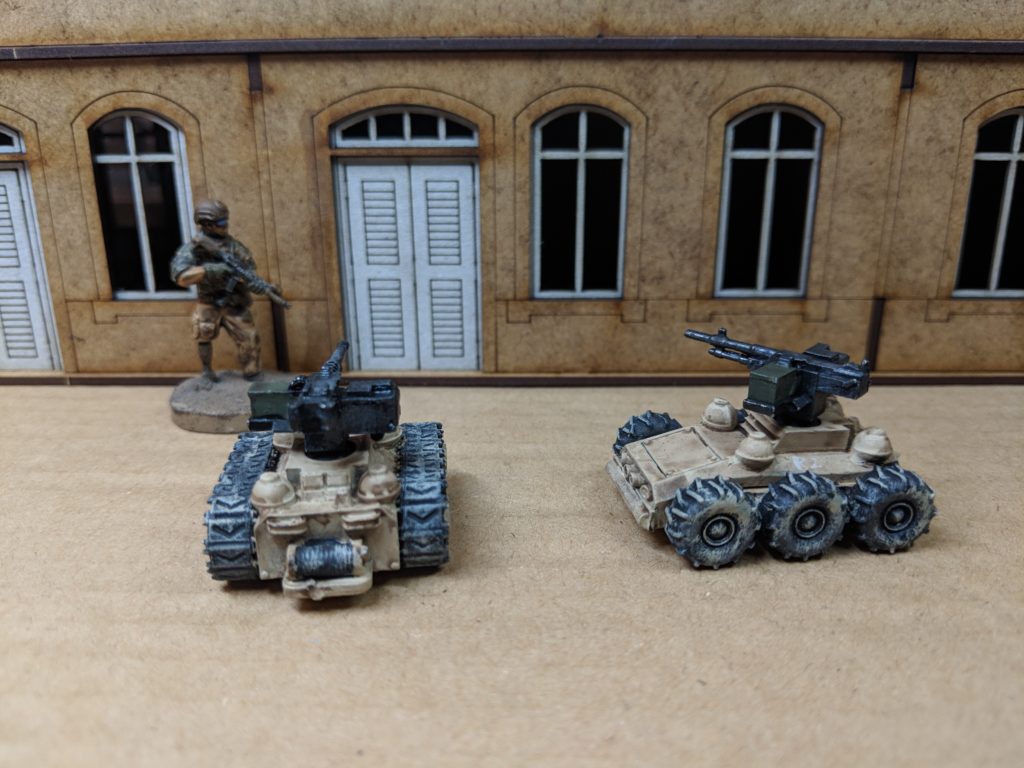 Honestly, these things are just cool. A little bit of ultramodern tech to add to your games (perhaps to show off the super high tech faction). You might need to jury rig some rules for them (most games don’t cover them quite yet) but they will be an interesting challenge. As the models, the casting is great with little clean up required and some neat details on them. Painting was a breeze and I’m pretty happy with the final result. C3 and R2 should useful when kicking doors and taking names.

If you’re wanting to get a pair of Close Support Drones yourself, they can be purchased from Evil Bear Wargames. At time of writing, their site is being re-developed but you can contact them via email at Evilbearwargames@gmail.com in the meantime.