As a rule, most modern wargaming figures are either metal or resin. Due to the relative niche amount of interest in ultramodern wargaming, it’s never really made financial sense to release plastic multi-part kits. There is however one place where a modern wargamer may find some suitable figures. Of course, it’s inside the subject matter that always sells, the genre that has a habit of spreading.. like a virus. Zombies. 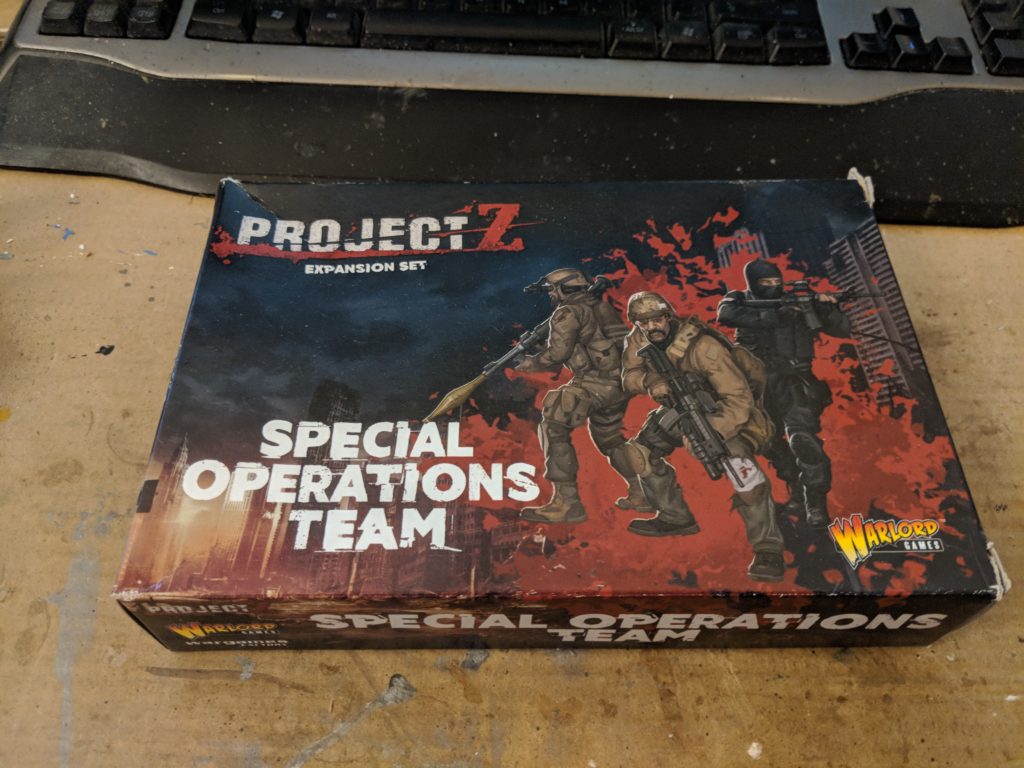 Project Z, Warlord Games’s entry into the zombie market, contains several kits of multi-part plastic figures designed to give you the widest option for assembling your gang of survivors. I’m going to look at one of them which seems the most interesting for gamers looking to build military forces, the Special Operations Team. From researching, these plastic kits were originally from Wargames Factory; the Special Ops frame was one that didn’t quite make it out the door before Warlord bought and repackaged the entire range. 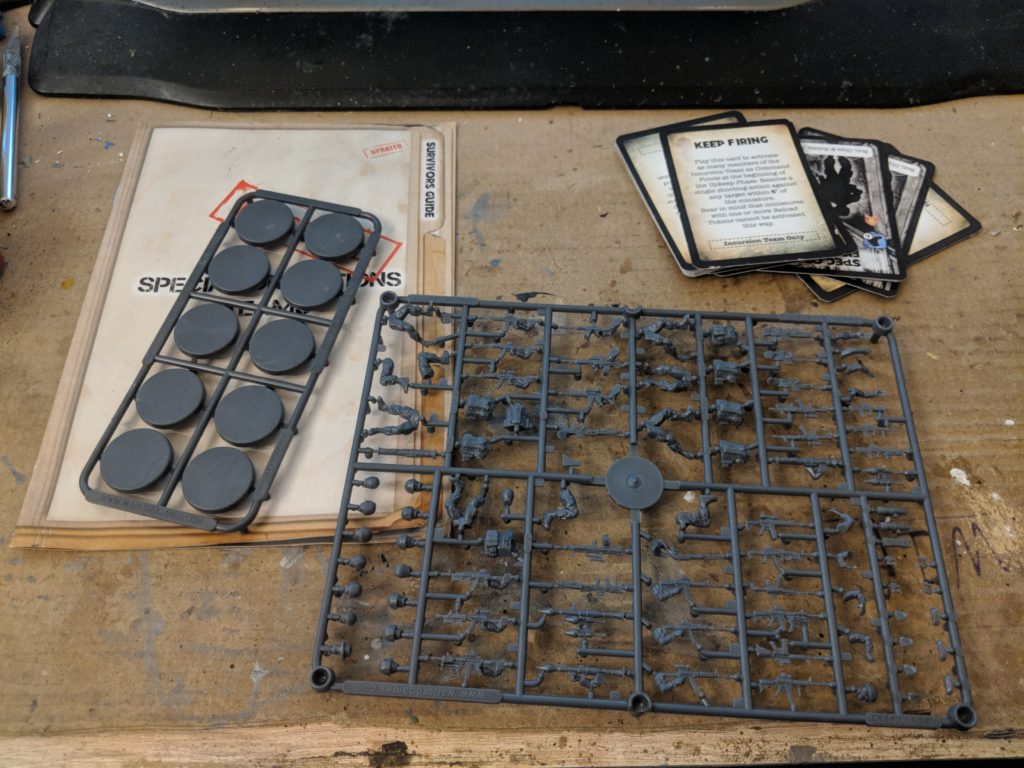 Alongside the Project Z specific components, the box contains one pack of 10 bases and a single sprue of operators, with enough bodies and legs to make 8 operators in total. The frame has a quite large number of weapons included (both attached to arms and unattached), giving you a wide variety of options. As well as the classic M4 and AK families, there are also weapons for the Chinese and British. For a bit of extra kick there is also a combat shotgun, what’s supposed to be an AT4 and an RPG (both in the hand and stowed alongside some extra rounds). All the parts are nicely moulded, showing off all the little details on the guns such as rail sections and various attachments. On the other hand, the plastic is super soft and I managed to bend almost all the barrels when cutting them off the sprue. Although I like the sheer variety of guns, it does mean you don’t have enough combined arms and weapons to make a full 8 man team with the same style of weapon – you’ll either need to make two small teams or be willing to do some additional cutting up.

The sprue includes some other handy details. There is a nice selection of heads with multiple types of helmets (US Army ACH and British Army Mk6 ish), balaclavas, bandanas and boonie hats. You can also add some extra details to make the squad look even more operator with NVG monoculars, belt mounted stowage and pelvic armour. There is even a block of C4 and some assembled IEDs for base detail or creating ingame markers. 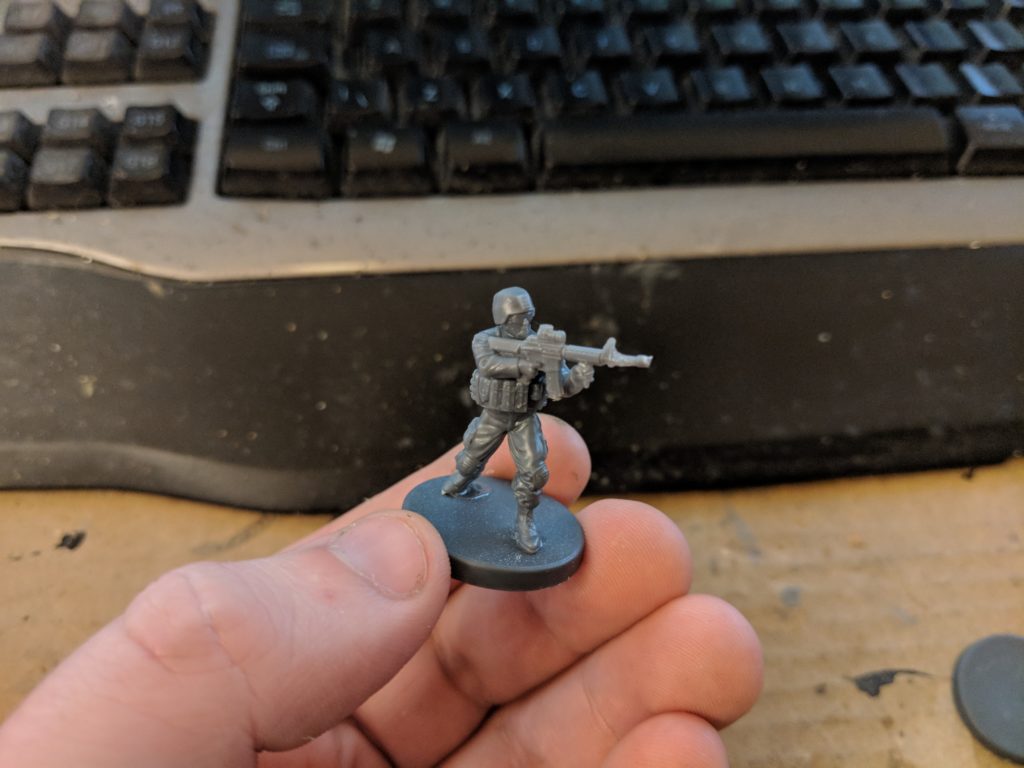 For all the positives, things get worse when you start actually building the guys. All the bodies share the same basic design (hydration bladder and plate carrier) with different shoulder positions designed for different arm/weapon combinations. There is a fancy guide available from Warlord for showing which arms go with which bodies. Documentation is nice but there seems to be a miscalculation in terms of arm sets. There seems to only be one of most of the lettered arms which can leave the second round of guys to be left with the more unusual arms. Combined with the limited leg options, this can lead to some really strange poses. After a relatively quick construction process (complete with plenty of frowning) and a painting sprint, here are the finished models. As I was losing my interest in them, I decided to go with the quick and dirty single colour clothing schemes covered up with some washes. Due to some of the issues I had with the parts, I had to create two themed four man teams rather than building one full size squad. 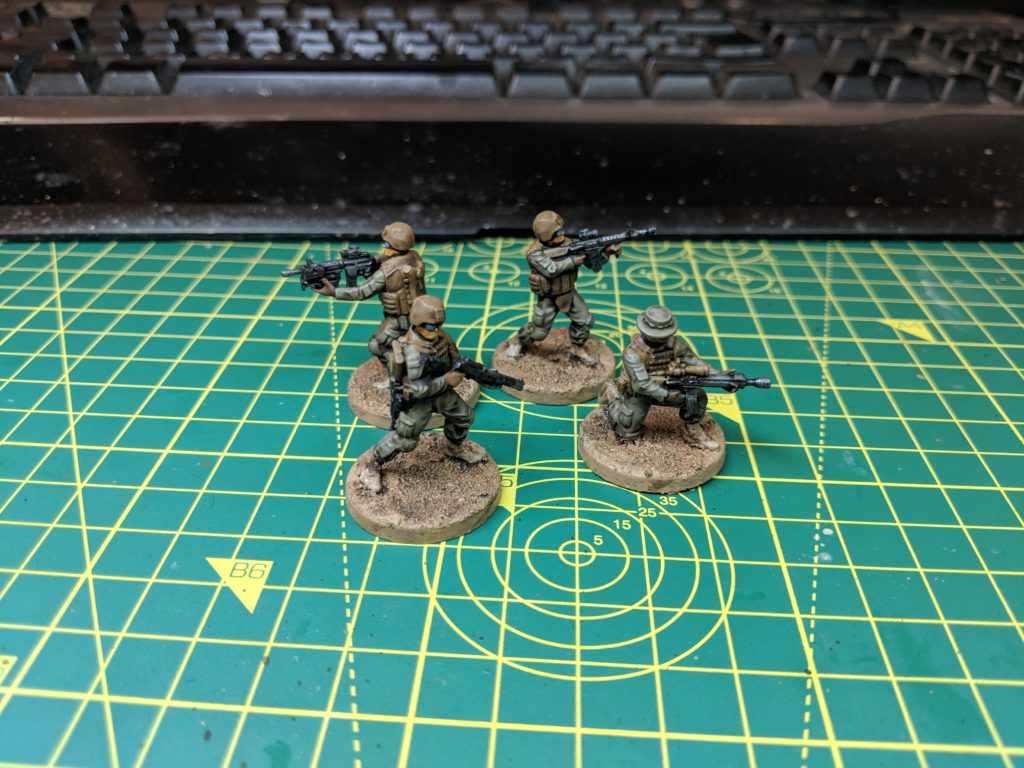 Team 1 is done in a Western look, with AR15 pattern weapons and a combat shotgun. For all of these, I used the ACH heads (except for the mandatory “marksman in boonie”) and added the crotch armour and extra stowage. Tan armour and weapon details offset the green of the clothing. 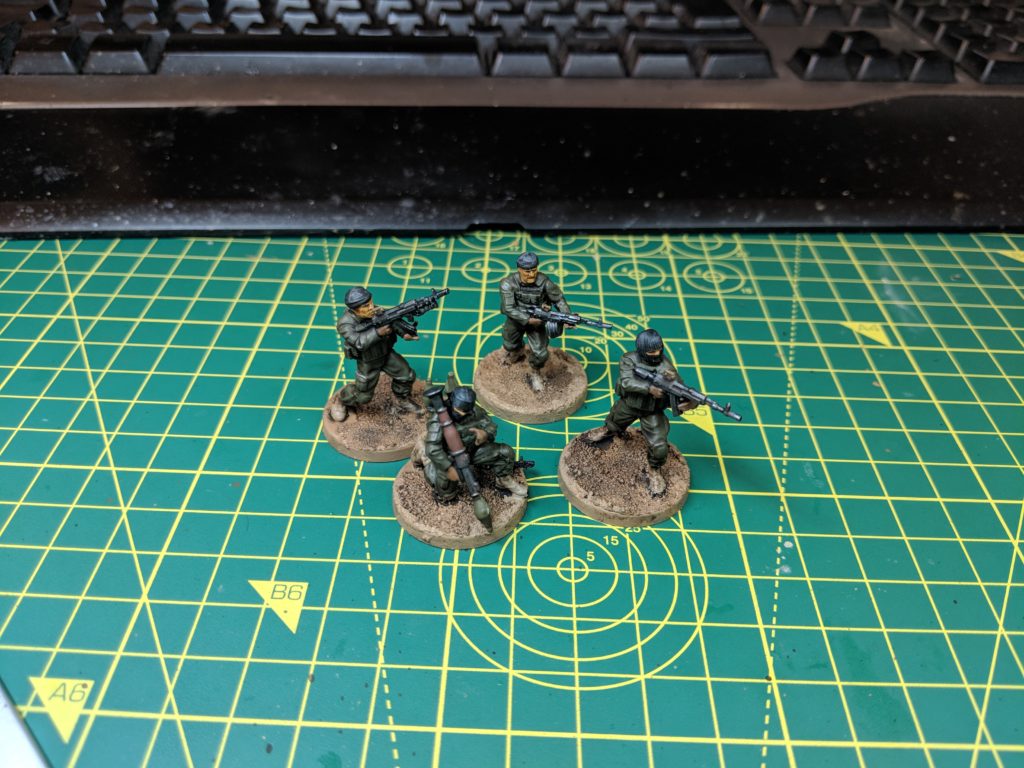 For Team 2, I went for a more Russian/Irregular look with the AK variants and a RPG ready to go. As an opposition to the tan tinged Westerns, these guys are all in greens and blacks. I’ll admit, I quite like the RPG gunner. With some arm tweaks he looks like he is ready to pop out and take down a vehicle or two. 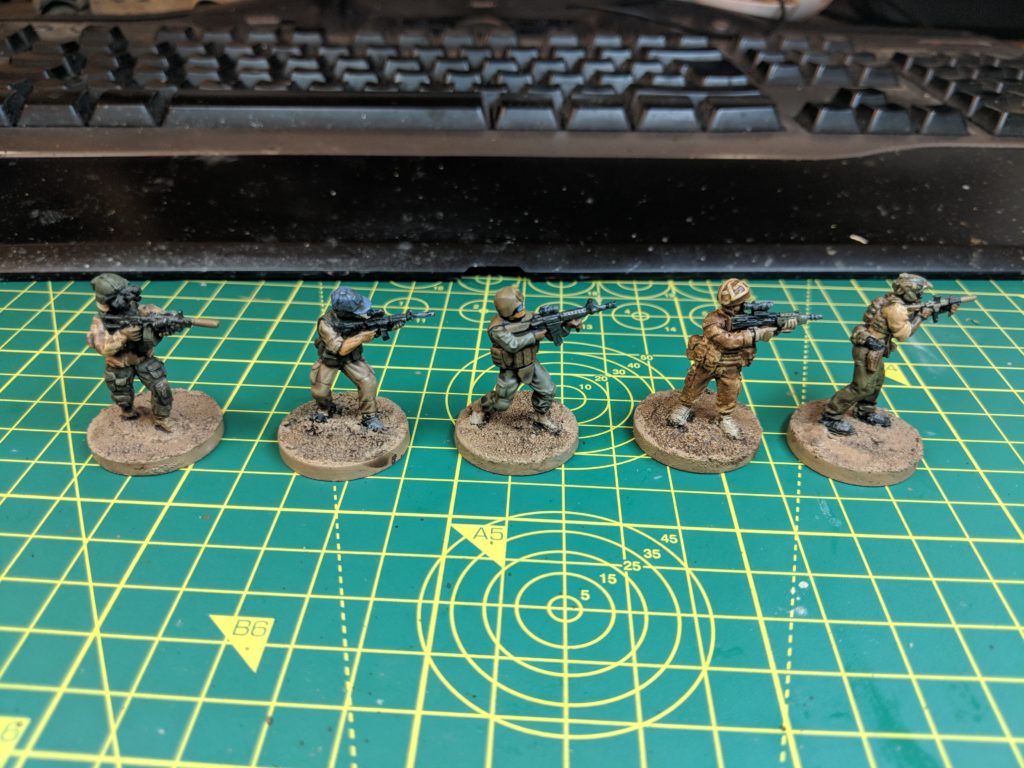 Honestly, I don’t think I’ve bought a set so far that I’ve hated the process of making as much as I did working. There is definitely some good points about this set but between some of the design decisions and the soft plastic bending left right and centre really soured me on the box. The main thing though is that, apart from pieces for conversion work, the set gives you nothing you can’t get from other manufacturers at better quality.

If you really, really want some plastic modern troopers (or need some of the guns for conversion work) I’d skip this box. Instead, you could buy four figure frames directly from Warlord. I get the feeling that (with the limited arm selection) this was how the sprue was meant to be sold before being redesigned. I still don’t think it will solve the posing problems but it does give you a few more options. On the other hand, if you play Project Z, the main box does include the cards and extra details you’d need.

If you’re reading this on release day (13/04/2018) or while catching a ride to London on the following day, I’m going to be at Salute in London on the 14/04/2018. I’m always happy to meet and talk with anyone who reads my site, so keep your eyes open for the bag shown in Monday’s Wargaming Week