If there is one thing any gamer knows, every battlefield should be littered a number of chest high walls perfect for hiding behind and funnelling enemies into killzones.. While thinking about balancing out my demo game and looking through my list of unassembled projects, I realised that I could kill two birds with one stone by building some more cover points for the insurgents. Time to assemble some Jersey Barriers. 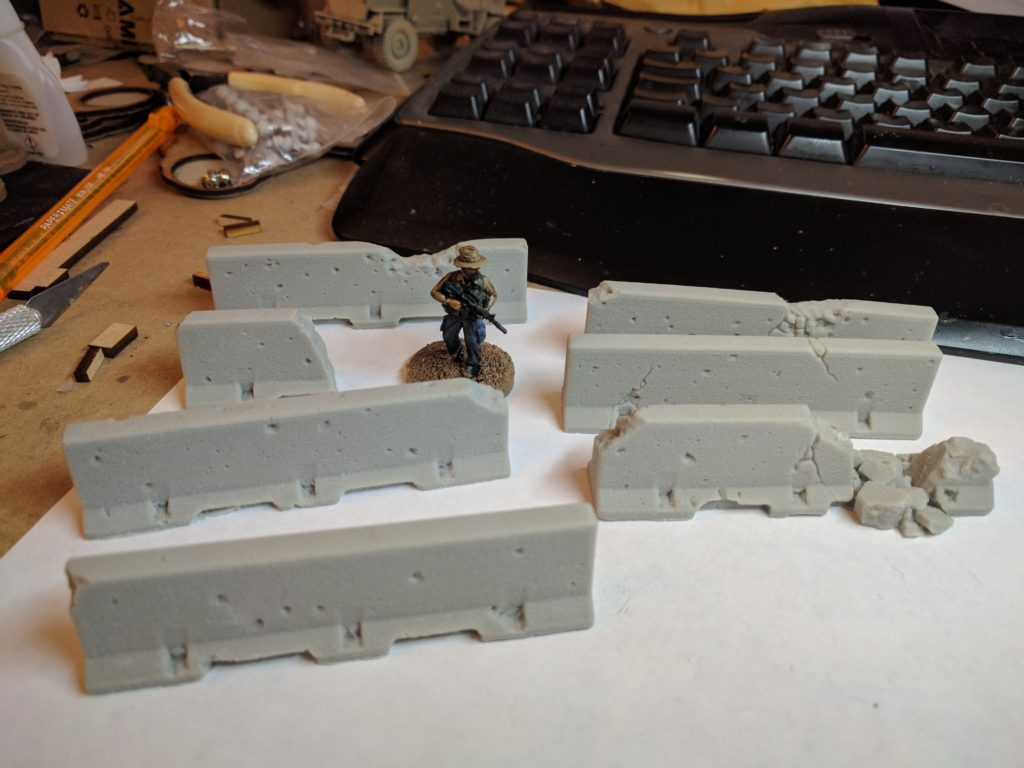 The starting point was Spectre’s Barricades Alfa. I bought this pack ages ago when they were first released and really liked them (as you can see in my original scatter post) but never got round to painting them. Part of this was working out the best way to use them. I could leave them loose for the most flexibility but it would put them at risk of being constantly knocked around by stray arms and vehicles. The other option, slightly more limiting but likely to look better, was to put them into groups. This was the option I went for. 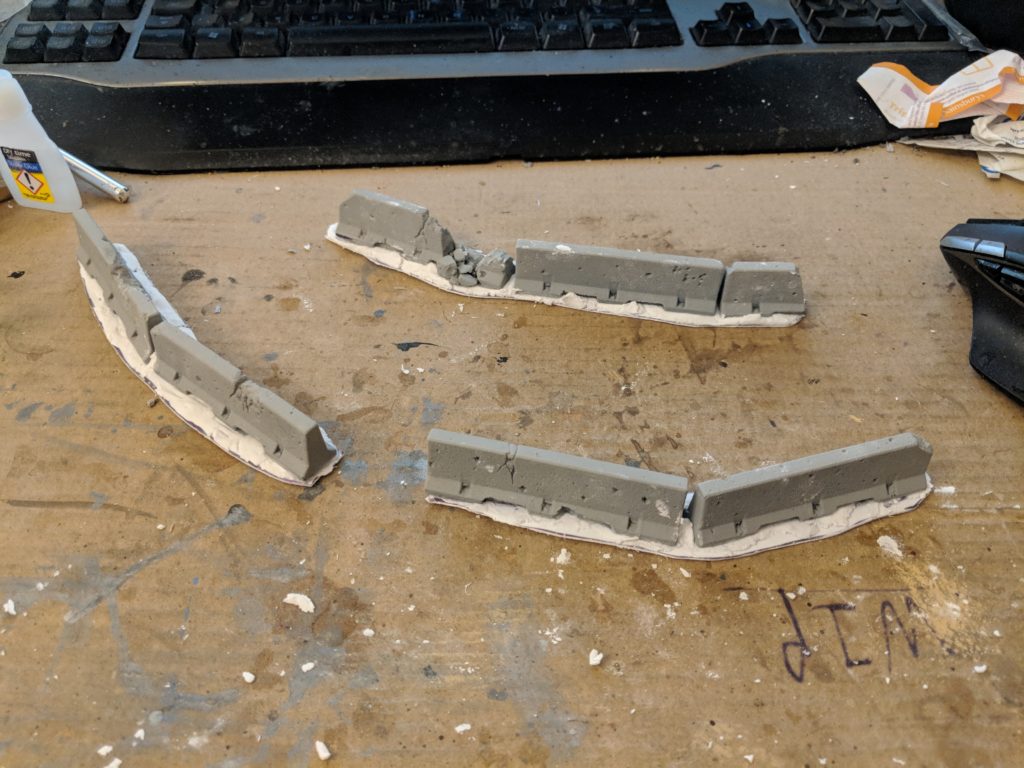 The first step was assembling the bases. I went for some straight-ish elements that look like emplacements without being too rigid. Like most of my demo board terrain, these were made out plasticard with filler laid over the top to form a surface. The ground was them covered in PVA and dipped into sand to add some texture. After that, they were sprayed in various colours. Black basecoat, then grey to give the concrete colour. Finally, I sprayed the ground colour used for my boards, aiming to hit mostly the ground elements and only a small dusting on the concrete (to show the sand resting in the gaps). Nuln oil on the grey was then used to darken it down and bring out the cracks sculpted into the surface. The final element? The traditional Iraqi sand drybrush. 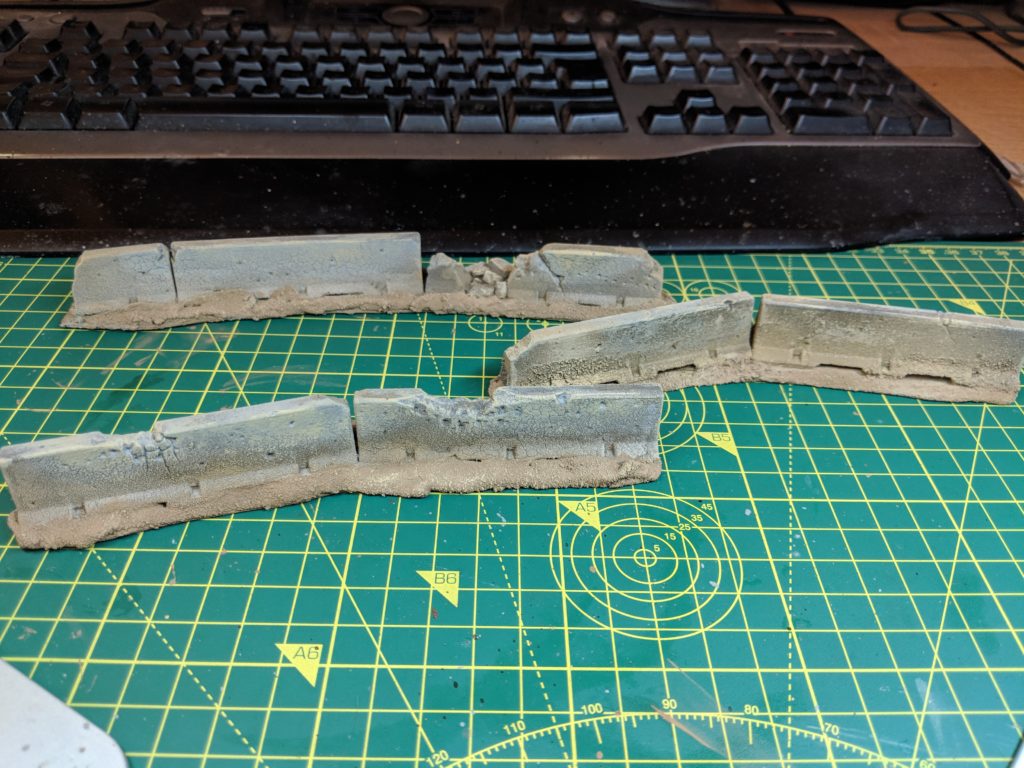 After all that, here is the final project. The texture generated from the sand and a spray can drying issue has helped to catch the drybrush and make the dusty look I have on most of my terrain.

And here is the reverse view. As you can see, there is a really nice level of detail. I’m tempted to add a little extra to the barricades by painting on graffiti and other messages from the locals. 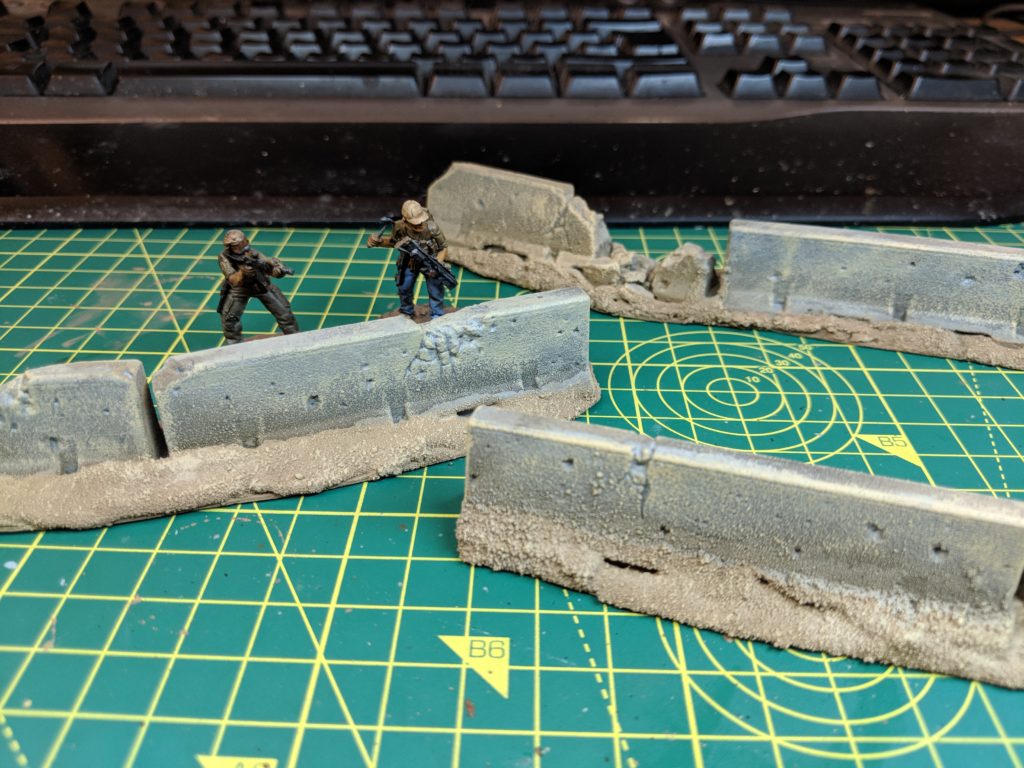 There we go, some new jersey barriers for my troops to use as cover/learn to vault over. I’ll be putting them into action this weekend at Hammerhead, giving the Insurgents some firing positions for their RPGs while also making the new partially constructed buildings feel more like a construction site rather than just in the middle of nowhere. I’m now looking at my other scatter terrain and thinking about the best way to use all of these small items.

(This wasn’t the post I had planned. However, I had a few issues this week which didn’t combine with Hammerhead prep very well and so I had to prioritise. I hope you enjoyed it!)

Final reminder – I’ll be at Hammerhead tomorrow running Operation Dragon’s Hoard. Look for the board with the crashed C130 in The Gamer’s Lounge!