In the last two posts in this series, we took a look at the basics of building a force, with posts looking at both task specific teams for infantry and the basics of vehicle use. In this part, we’re going to be taking a look at some of the points relating to more irregular groups. As with previous parts, this article is designed primarily for Spectre Operations but many of the tactics are valid in all modern skirmish games. 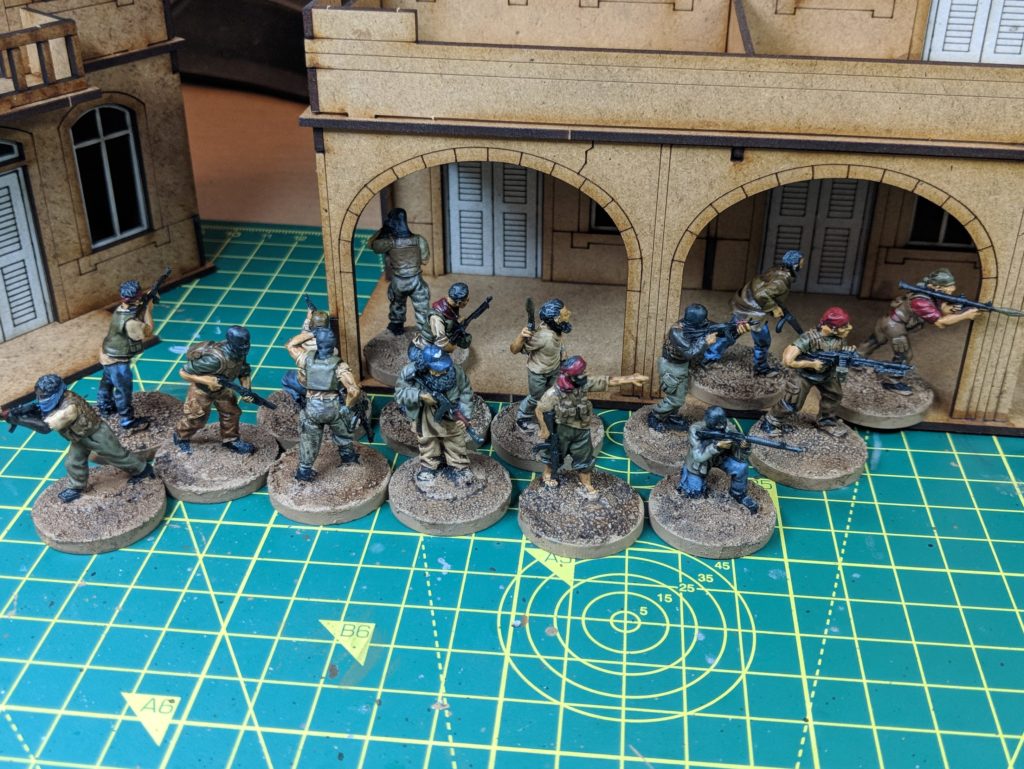 Irregular forces, by their definition, vary massively in style. They can be anything from untrained groups of fighters armed with nothing more than an AK and the shirts on their back up to well equipped groups that rival (and in some cases beat) the more traditional forces in terms of capabilities. However at a fundamental level, building an irregular force still relies on the commander identifying the goal and picking what is needed to fulfil the task.

So why am I writing a separate post for these less well trained forces? Why am I not just reposting the first article but changing the pictures? Well, Irregular troops normally don’t have all the benefits of national forces and so there are several points they need to think about. 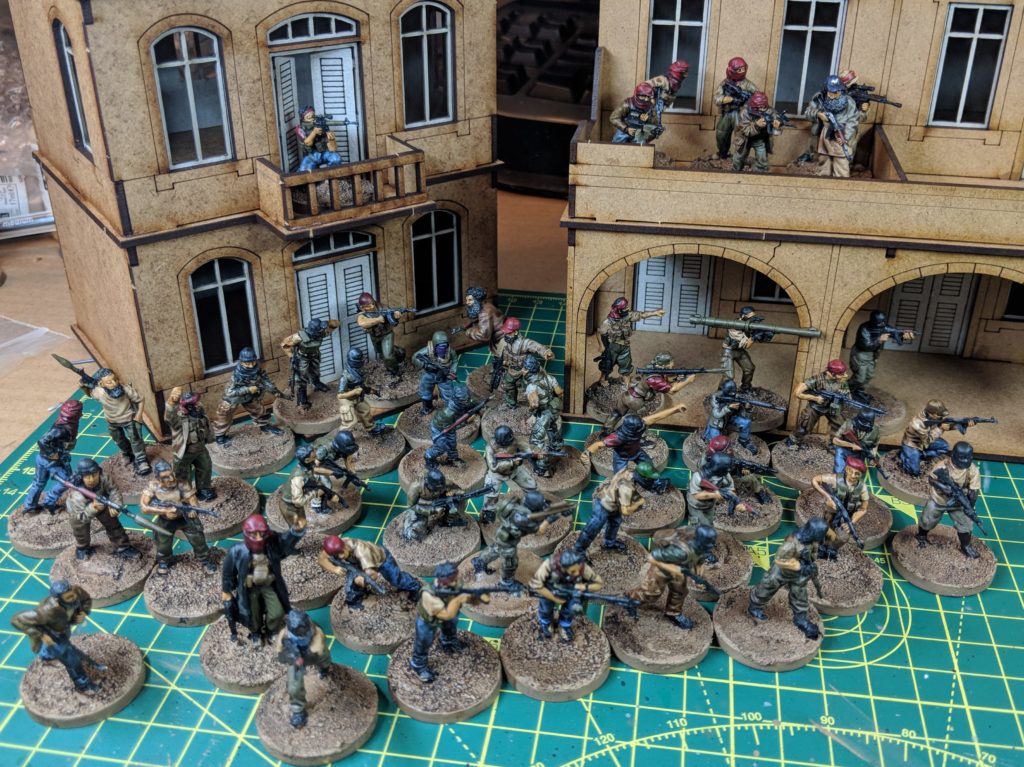 The first point to realise is that in most cases, your forces are going to be much less effective on a one to one scale than the regular forces you’ll normally find yourself up against. In Spectre Operations (and in most games), this will mean you’ll have a lower chance of hitting when shooting, be more likely to become suppressed (as there is no cap on your and will lose in a close quarters fight in one to one combat. Put simply, the bulk of your guys are a bit shit.

However, it’s not all bad news – after all, quantity has a quality all of it’s own. If you play with points based forces, your militia and trained soldiers will be much cheaper, meaning you can more easily flood the board with forces. If instead you play scenarios, most of the time the writer will give the irregular forces a significant numerical advantage, either through just have more guys on the board or letting casualties be recycled back into place (perhaps representing militia fighters finally getting into position before joining the battle). As many of the battles wargamers play will feature teams of SF operators assaulting locations, the irregulars will often be on the defensive, often letting you setup in positions and dare the enemy come towards you.

Having a numerical advantage doesn’t guarantee a victory but it can certainly help. Especially when you consider the next point. 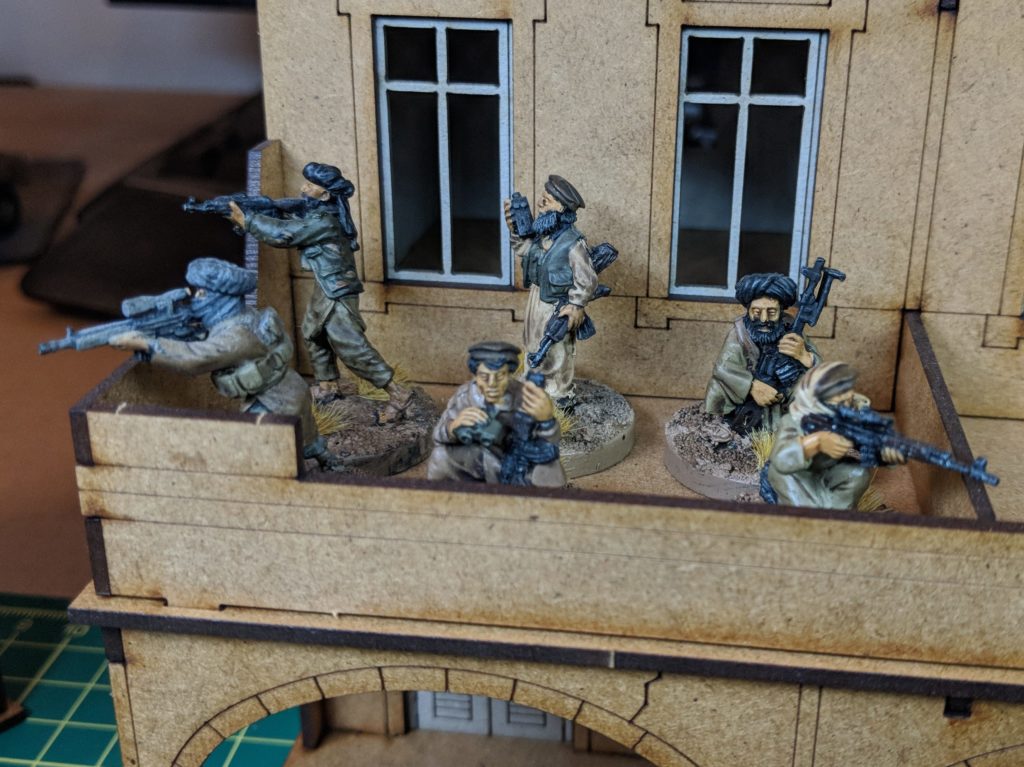 Put simply – you’re gonna need a bigger squad. Seeing as the . If you were working from some of the teams from the first article, I’d probably add two or four more guys armed with assault rifles to add some extra firepower or “ablative armour”. An alternative way to keep your force moving is to take additional smaller squads armed simply, without machine guns or explosives, and use them as supporting units to your task orientated squads. This lets you leverage your greater numbers, protecting your main force by engaging first with lighter elements or by outflanking the professionals. 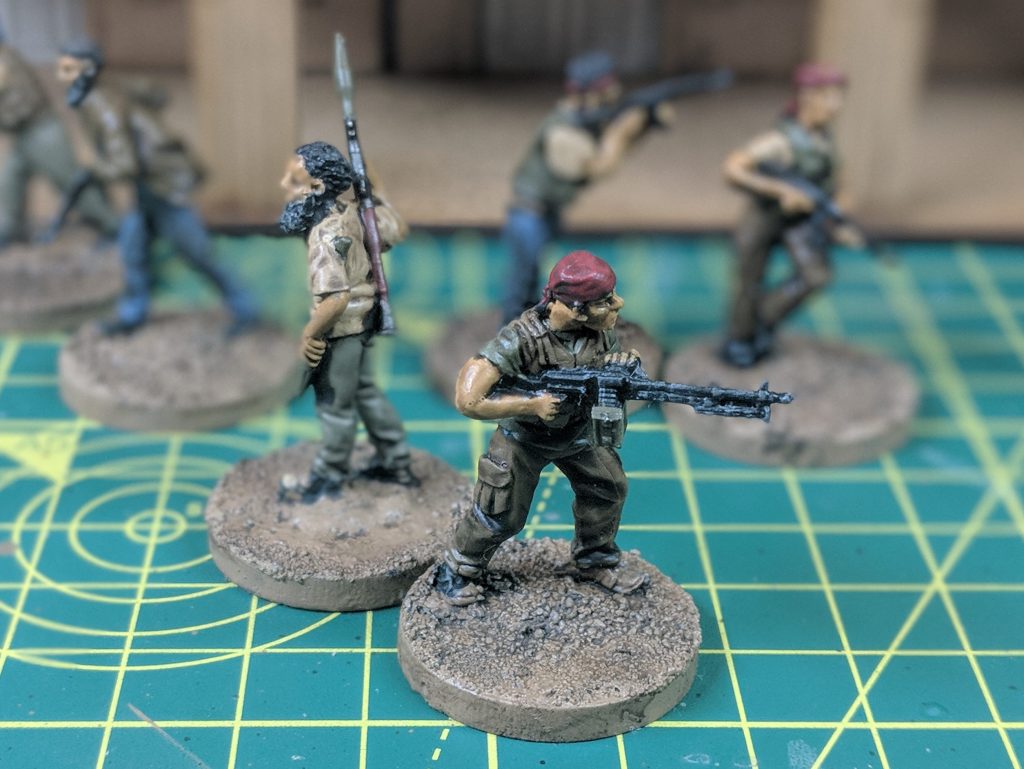 At the same time, you get some useful weapons. The stereotypical irregular group (seen everywhere from Afghanistan to Sub-Saharan Africa) has two aces up their sleeves – the RPG-7 and the PKM Medium Machine gun. Both of these weapons are encumbering so you’ll be slowed slightly while using them. On the other hand, they do provide a massive benefit. The MMG has a longer range than the SAWs most modern forces are armed with, has a greater lethality and can also cut through body armour and light vehicles thanks to the armour piercing rule. Sustained Fire also lets you spread the fire across multiple troops, useful when fighting Professionals and Elites who can only take a certain amount of suppression. The RPG on the other hand is all about causing damage. Although it can’t fire indirectly like a UGL, it’s more than capable of putting suppression down on a large group. Additionally, it can also help when engaging enemy vehicles depending on which warhead you use.

By combining these two weapons together, your basic squads will be able to kick out a lot more firepower than your enemy might be expecting. There are also other weapons that might be handy to include in an irregular force. A common trait for many of these is Armour Piercing, helping to make your guys more effective against enemies wearing body armour or vehicles. Adding Light AT Weapons or Sniper Rifles help up your ability to take out more heavily equipped opponents while also allowing for more flexibility in your deployment. 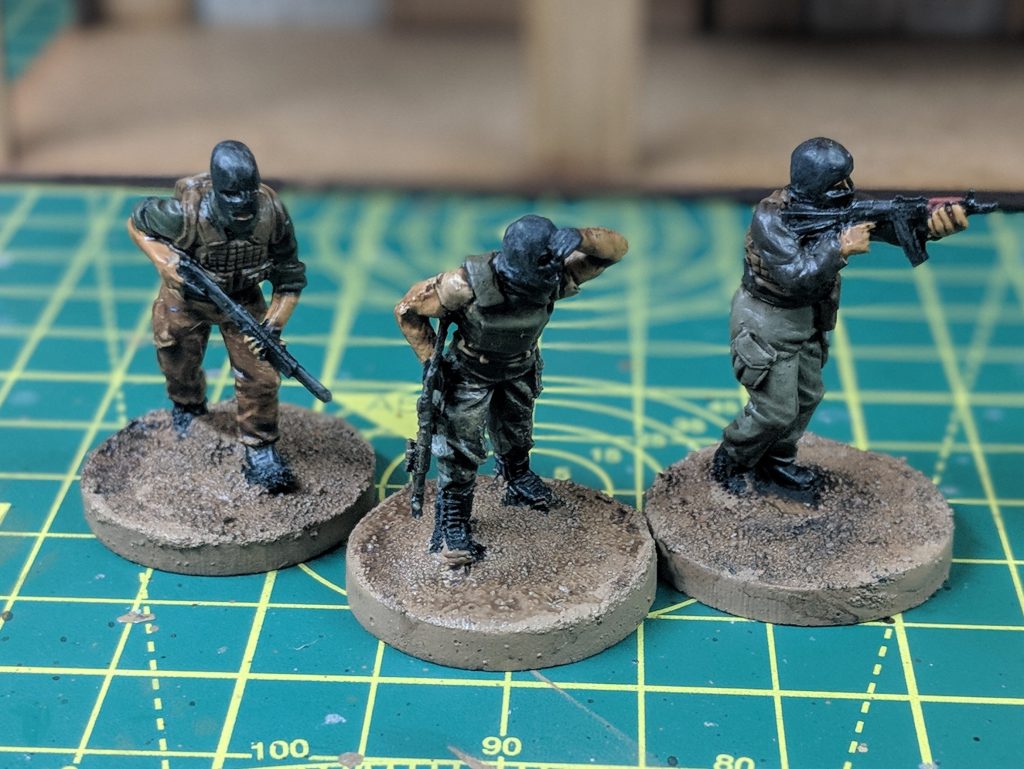 To many, using body armour in a wargame helps to differentiate the better equipped and trained forces from their irregular opponents. However, body armour is increasingly available to the general population and in certain situations, it’s not inconceivable that some insurgents or militiamen might end up wearing kevlar.

So how best to use it in your own forces? Body Armour helps to reduce the lethality of shots that hit and so can help to keep your guys alive for a little longer. However, it is quite expensive for what it does so it might not be worth equipping your entire force with it, especially if your forces are mostly in the lower end of the training spectrum. Instead, outfitting your best trained and armed teams with body armour will help to keep them safe while moving up to their objectives. The rest of your force will just have to focus on sticking to cover and moving quickly. 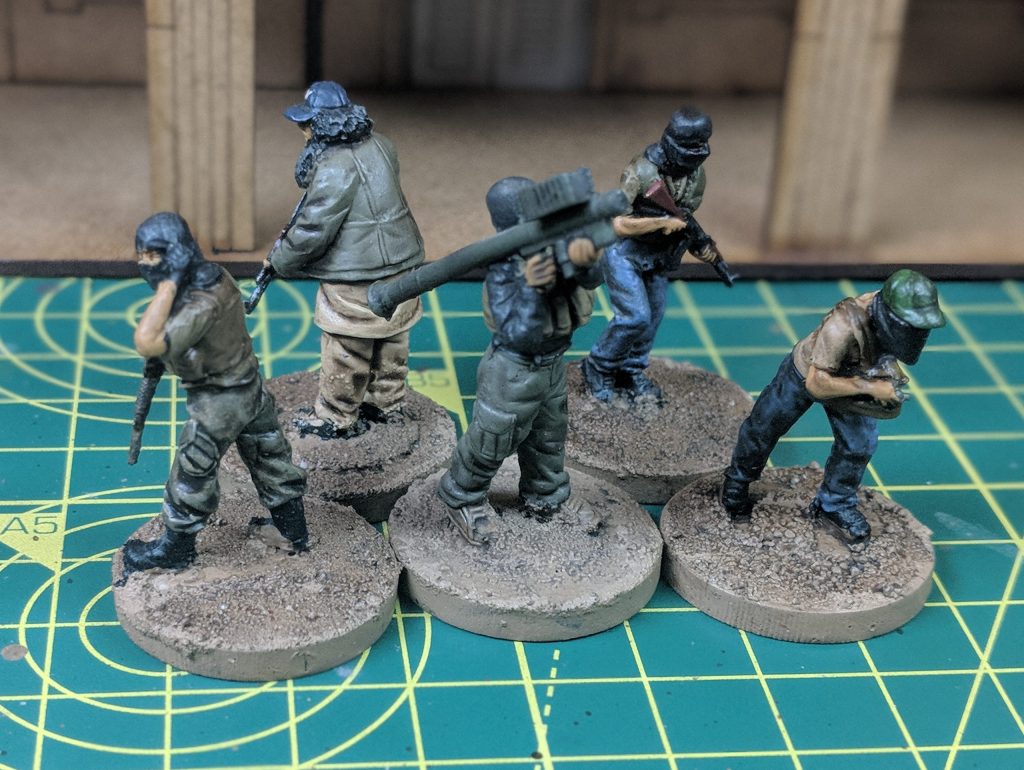 As well as body armour, there other items that are worth thinking about taking:

We’ll discuss some other bits of equipment and support (mostly the stuff that goes bang) for the irregulars forces in the next instalment. 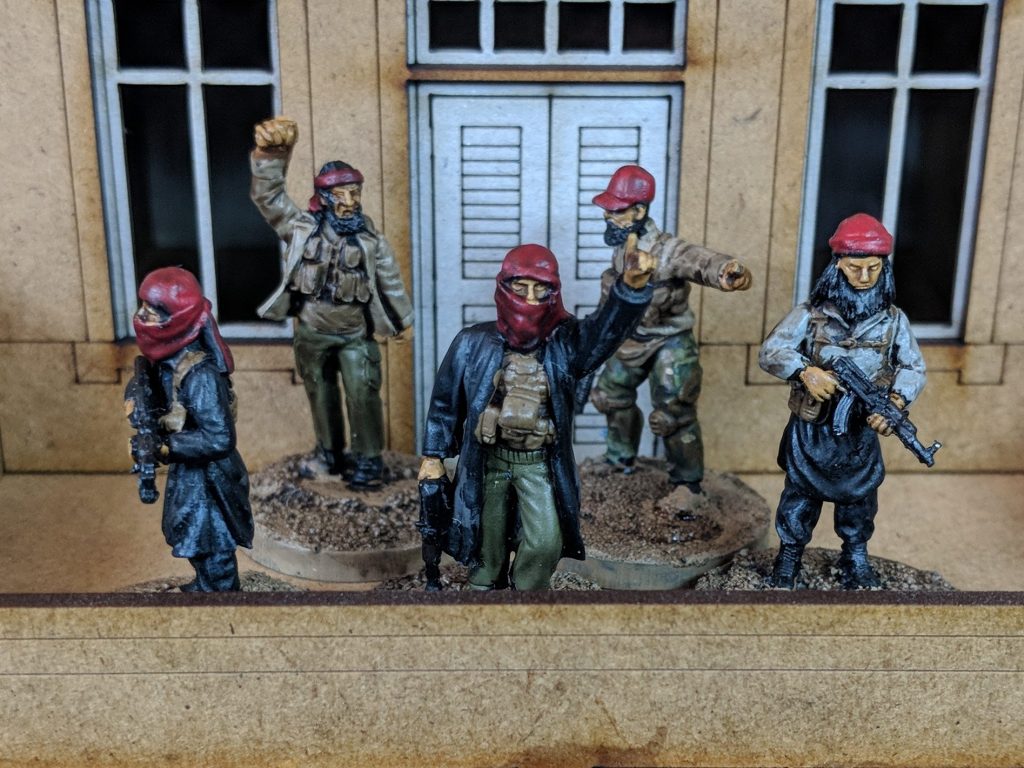 Overall, irregular forces present a slightly different challenge to the better trained and equipped regular troops. You’ll need to organise your forces carefully, rely on any advantages the situation gives you and be aware of your limitations. If you are aware of all these tweaks, you can easily outfox and out fight your better trained opponents.

In the next article, we’ll take a look at the heavier weapons an insurgent force can bring to the field, including emplacements, technicals, off map resources and even the sneakier tricks of modern warfare.