Empress releasing a new range in their modern collection is a pretty major event, especially when it introduces something entirely brand new. Going for the all in approach, a new range gives you plenty of toys to get ready for the tabletop. Earlier this year, just before Salute, they finally released one of their most anticipated ranges. First teased at the end of the Empress Kickstarter back in July 2013, the German Bundeswehr is now available from their website. 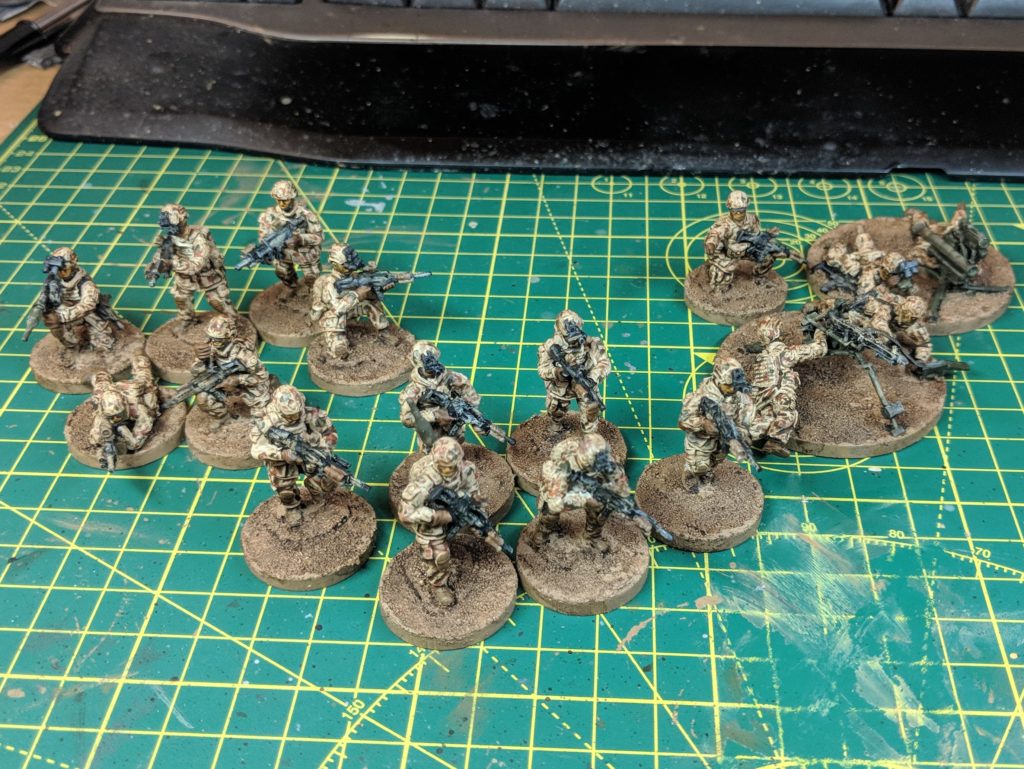 These Germans are also not your standard 2000’s era Afghan ground pounder (if you’re wanting them, Eureka have a suitable range). Instead, Empress has gone with these incredibly modern looking guys equipped with the IdZ system, a product of the German Future Soldier program. You can see this throughout their gear, from the Ops core helmets with vision systems to various details on the G36s (such as new stocks, optics and laser units). As you’d expect, all the figures in the range are the usual Empress quality and sculpting style. The figures do come with detachable heads of varying styles (no vision system, NVGs and heads up displays) and separate heads are available if you want to equip all your soldiers with the same type.

Empress notes on its website that the packs give you 6 man fire-teams by combining Pack 1 and either Pack 2/Pack 3. This number roughly matches up to dismounts for the Puma IFV but there is nothing to stop them represent foot troops or those using other German Army vehicles. 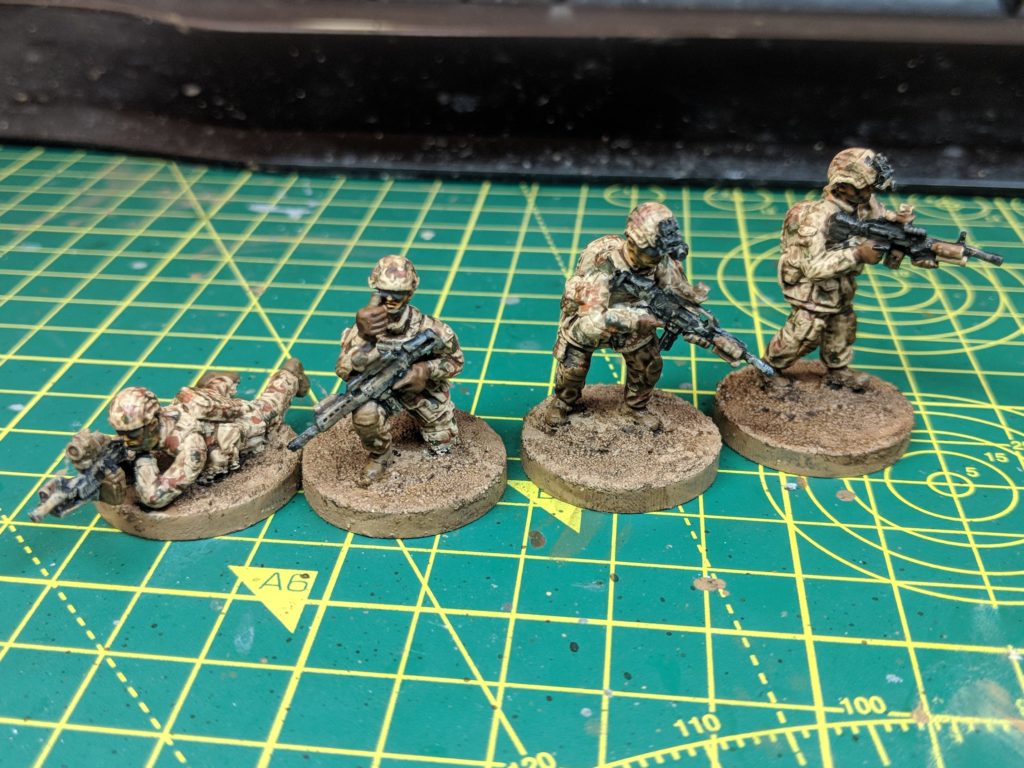 The first pack is your command and support pack. This has two Team Leaders (armed with the G36) and two Light Machine Gunners (equipped with the new MG4). Much like the other two packs, the figures are split into advancing and engaging poses. The pack does include one of my wargaming pet peeves (a prone figure not part of a support weapons team) but thanks to the MG4’s short length you can just about fit him on a standard size base. On the other hand, it’s rather cool to see one of the team leaders holding an optical viewer up to his eye, showing him taking advantage of the IdZ system. 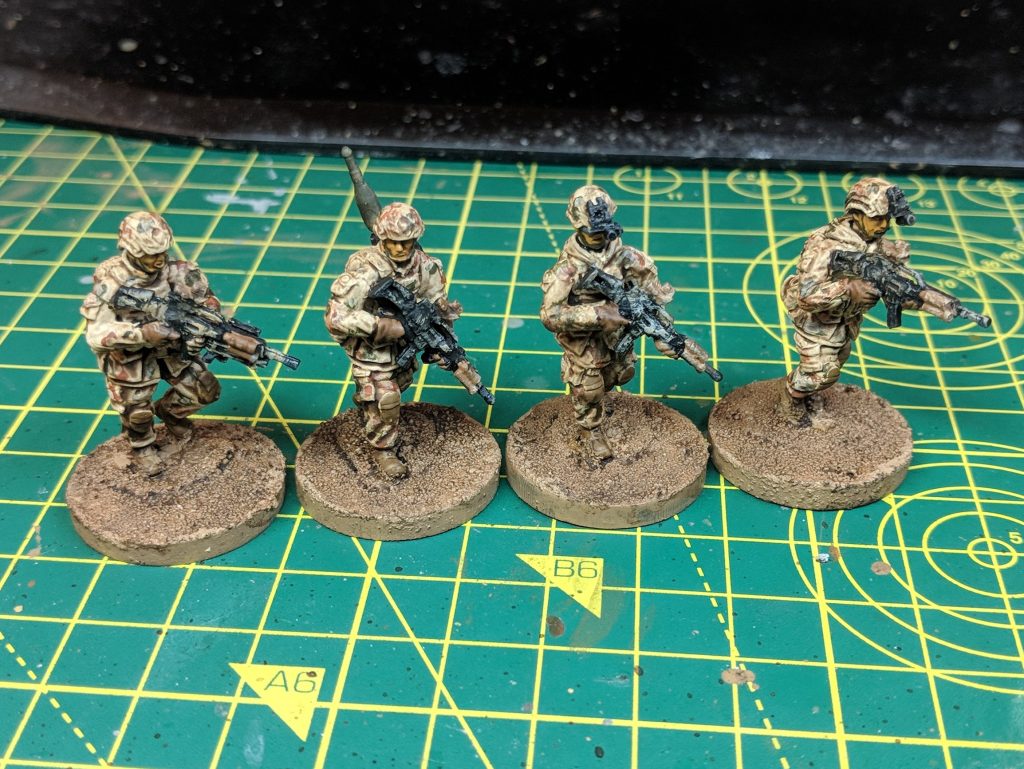 The first fire team is posed advancing on patrol, with weapons held relatively low. The team has a selection of weapons, including a Panzerfaust 3 AT weapon (complete with optic) and UGL. Every soldier also has a G36, with an optical sights and lasers. 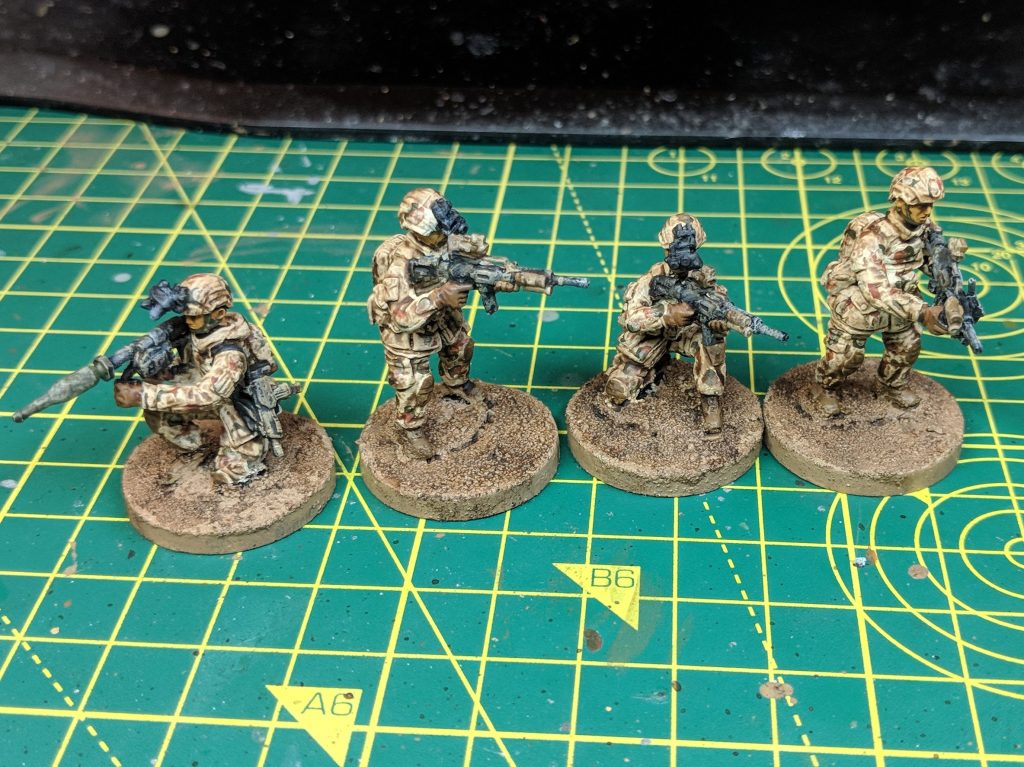 Fire Team 2 is posed engaging (or preparing to engage) the enemy. Weapon loadout is the same as Pack 2, except that the AT gunner in this squad is equipped with an MP7 SMG rather than a full-sized assault rifle. 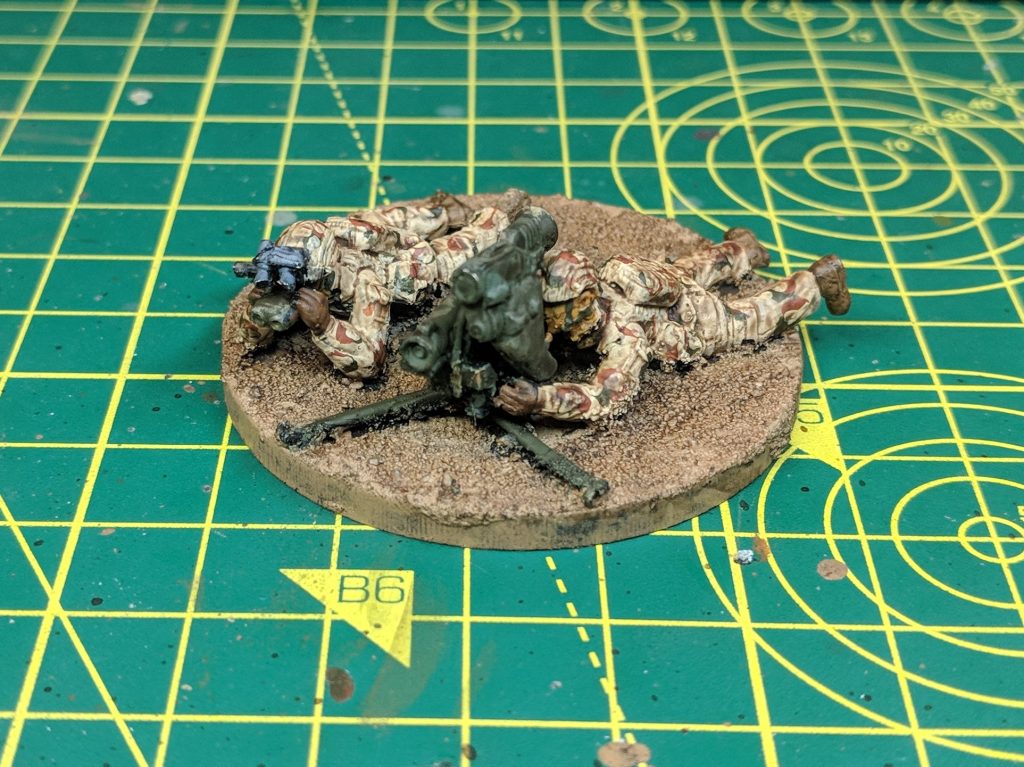 Every new range needs support packs and the first of them gives the some anti-armour/anti-bunker support in the form of the MILAN ATGM. It’s a nice change from the Javelin featured in many of Empress’s other forces. It’s also nice that the pack includes a MP7 for the assistant to use (great for systems where weapon teams can still engage with personal weapons). The Milan also

I had a bit of difficulty trying to get the crew figures to line up properly on the launcher. Eventually, I unfortunately managed to break the legs off the tripod so it’s now operating in an incredibly low profile mode (with one of the gunners covering up the most damaged leg). I’d recommend taking your time assembling it, rather than trying to rush it, and to dry fit all the parts. 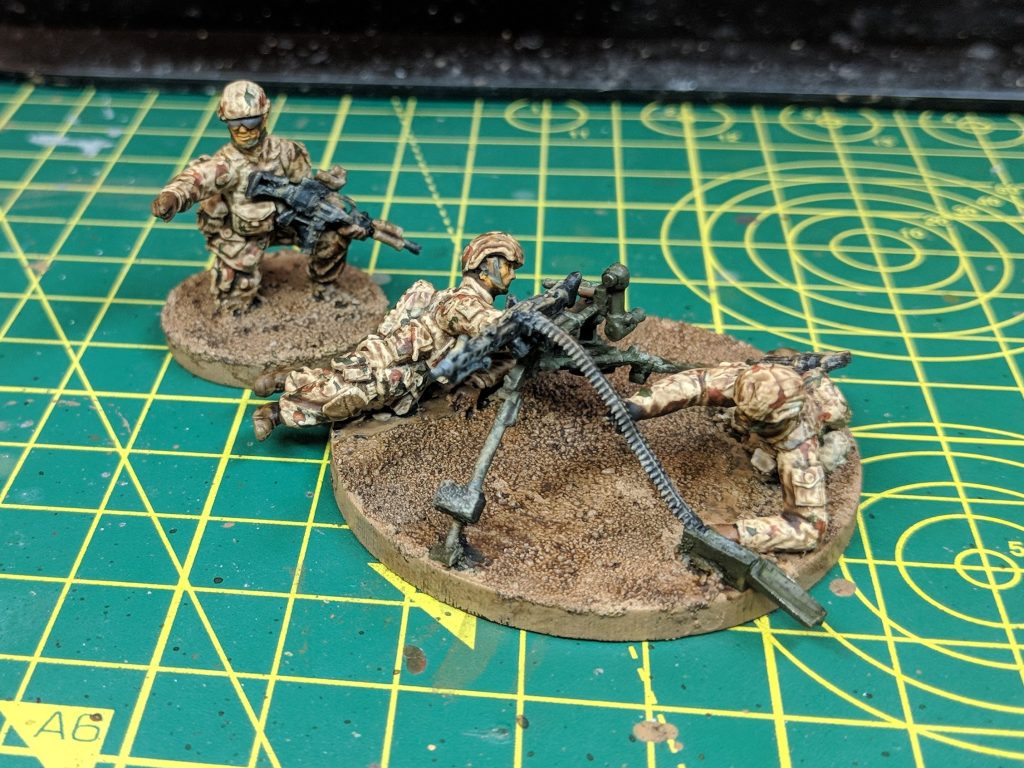 In a fantastic case of “Something Old, Something New”, the last pack in the range gives you a three-man MG3 team, with the venerable weapon design on a tripod many WW2 players will quickly recognise. This Feldlafette tripod actually lets the team fire the gun from the prone position thanks to the optical periscope system. The pack comes with three figures – the team leader is directing the team (and could be used as part of a foot patrol), the assistant is feeding the belt of ammo (while carrying a MP7) while the gunner is adjusting the elevation of the tripod. I had a bit of fun trying to fit the team on my standard weapon team base, leading to the unusual positions you see above.

As with the MILAN I found this a little fiddly to assemble. I’d really recommend taking your time assembling it, especially if you want to prevent it being slightly tilted.

This is my first time painting Germans so I had to work out how on earth to paint their camo up. Seeing as I play mostly in desert settings, I went look for how best to paint Tropentarn. Luckily, Eureka has a guide (including Vallejo colours) for both temperate and desert flecktarn. In order to reduce complexity, and seeing as I end all my paint jobs with a copious amount of Agrax Earthshade, I decided to tweak it slightly:

The process was base colour, large dots of Green and Brown and then cover up slightly with smaller dots of the base colour. This give the impression of the camo without it being dominated by the pattern. I’m also not sure the colours are 100% correct but it provides the right look (as well as being different from any of the other nations I’ve painted so far. 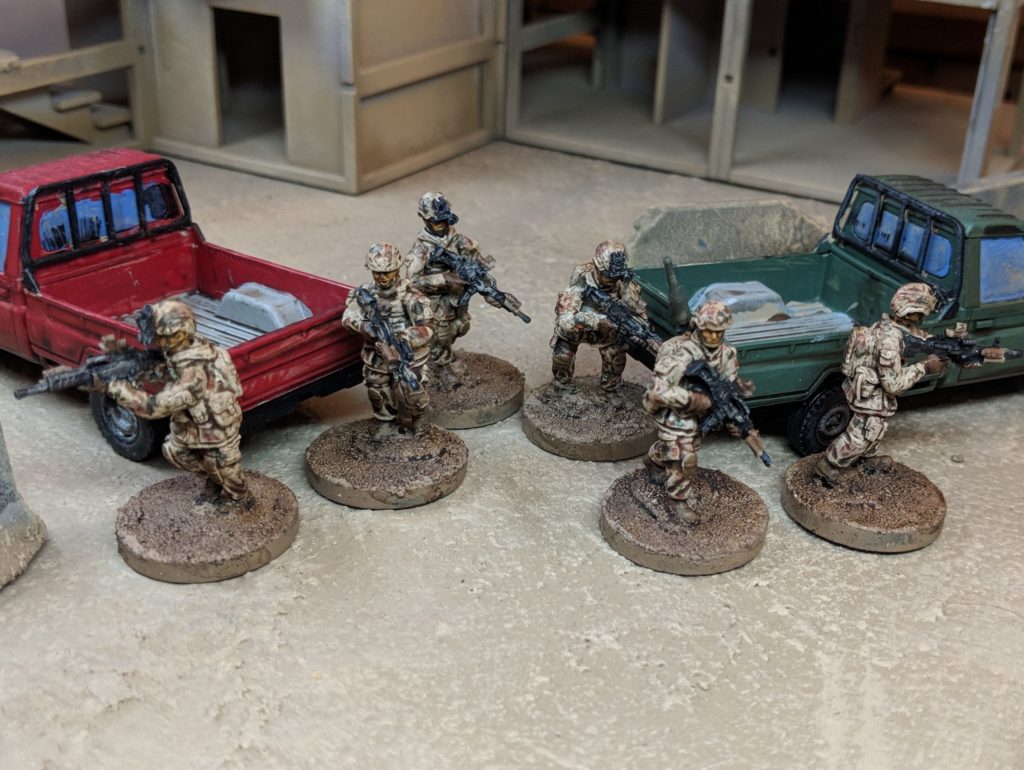 Overall this is a pretty different release. It’s a strange blend of old and new, combining old kit like the MILAN and MG3 with the ultramodern elements of future soldier program. It’s great to get some ultramodern Germans, providing an alternative to the older Eureka figures. It also gives the Empress Leopard 2 some dismounts to escort it. It’s also great to have some G36 equipped bodies. These could be a great jumping off point for some conversion work as a whole host of nations use the G36.

Aside from my usual comments about my cack handed lack of fine motor functions in regards to the finely detailed Empress support weapons, my only other comment is that a pack of additional patrol suitable support weapons would have been a nice addition to the range. A pair of guys with the G28 DMR or G22 rifle would be handy for giving some long-range punch while a version of the MG3 or the new MG5 MMG on the move would give some additional fire support for a patrol. We’ll have to keep an eye on the future to see what Empress get up to.

If you want to pick up your own German Infantry for fighting the Russians or training the ANP in Afghanistan, you can find them on the Empress website.