Do not adjust your set, you’re about to look at a post that may not quite match with what you normally come to the blog for. But don’t worry, we’ll be back in the modern-day on Friday.

As I’ve said before, modern wargaming is still my favourite thing. But you know, maybe it’s time for a side project or two. For a while I’ve wanted to do something Fantasy related. I’ve also wanted something that is relatively quick to play and easy to pick up. I bought Open Combat earlier this year and after reading it (and talking to the author at Chillcon) it seemed perfect to act as a base. However, it’s not a ChargeBlog project until I break out the rule writing and there is a specific type of game I’ve wanted to run:

As such ,Project Dungeon Crawl is made out of three parts:

We’ll look at the first two parts in future posts but today we’re going to focus on building the troops. Before deciding what I wanted to buy, I had to think about the look I was going for. The plan was for some dirty grimey low fantasy, with the dungeon delvers being the city watch fighting through the sewers and caverns against the thieves and cultists that inhabit them. The Frostgrave Soldiers box seemed ideal for my purposes based on pictures of the sprue and the examples I’ve seen produced from it.

After breaking out the plastic glue (last seen building crashed C130s) and sitting down with a box of sprues, it was time to get building. 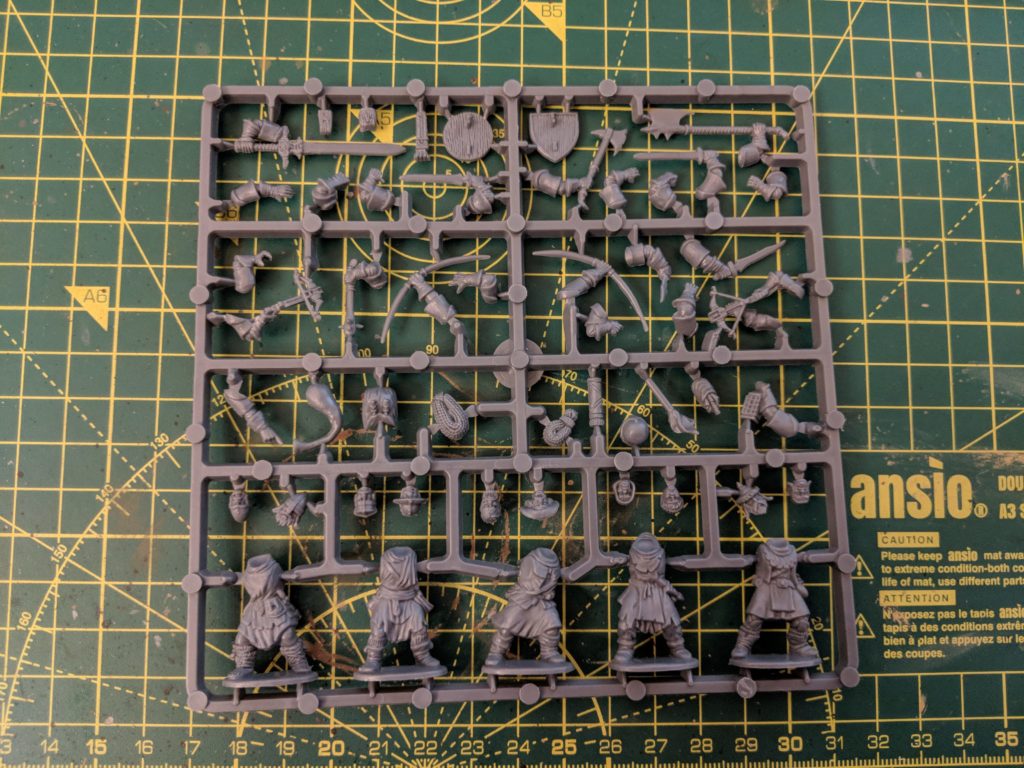 The Frostgrave Soldier box comes with four identical frames of various plastic pieces. The max number of figures you can build from each sprue is limited by the bodies included on each one, giving you 5 figures per sprue giving you 20 in the box. The rest of the frame is packed full of items – there is a nice variety of weapons you’d want in an adventuring party as well as plenty of tools and kit to really make them look like a group carrying all the kit needed to get past all the various traps you may meet. I really like the lantern – perfect for going through dark tunnels. One comment i was about to make was in regards to the relatively few left handed weapons (other than a small knife); however I then realised that with only a little extra work you could easily use some of the clenched left hands after clipping the weapons apart.

The box doesn’t include an exact construction guide but most of the bits that are multi part (such as the bows) are located close to each other to make things easier. The plastic is pretty tough meaning that there was very little damage to the pieces when clipping them from the frame. Overall, it’s a great frame to work with. I will say that after finishing a box I have a literally pile of arms, heads and more waiting to be used – all I need is some more bodies and bases.

Anyway enough technical stuff, lets take a look at what I’ve made so far. These are all WIP – they are not quite ready for painting as I might go back and add a few other items and do the last bits of cleanup. 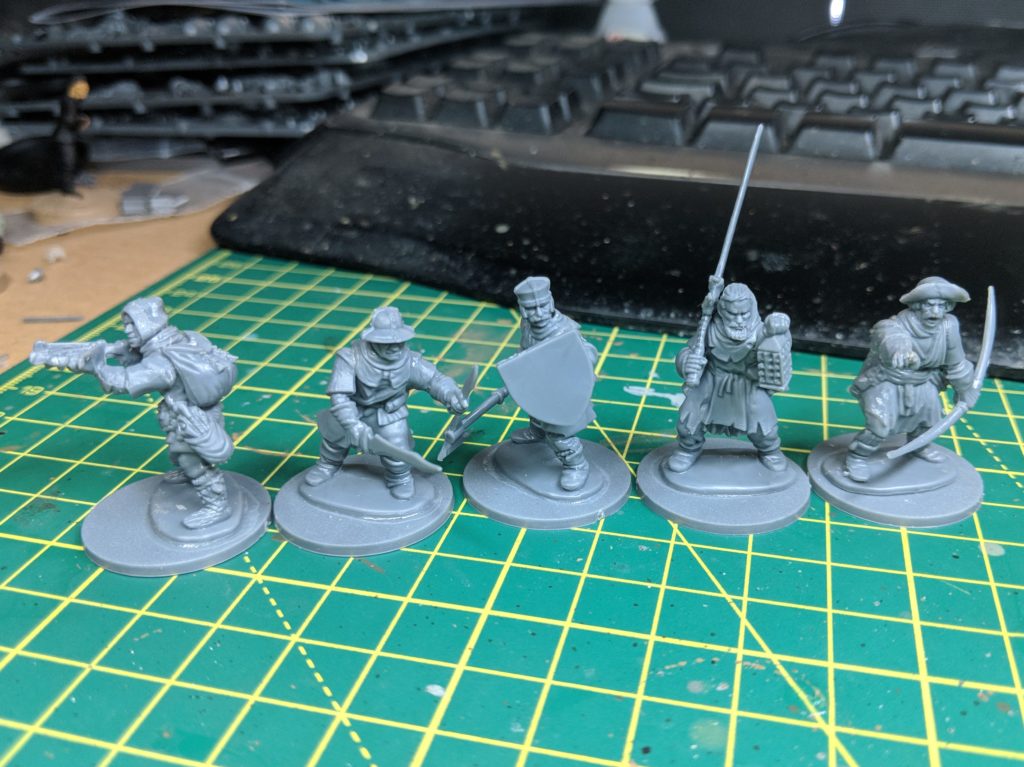 Group 1 was the very first figures I made once the box arrive. The idea for these is to represent the City Watch while looking at the options. From left to right we have: 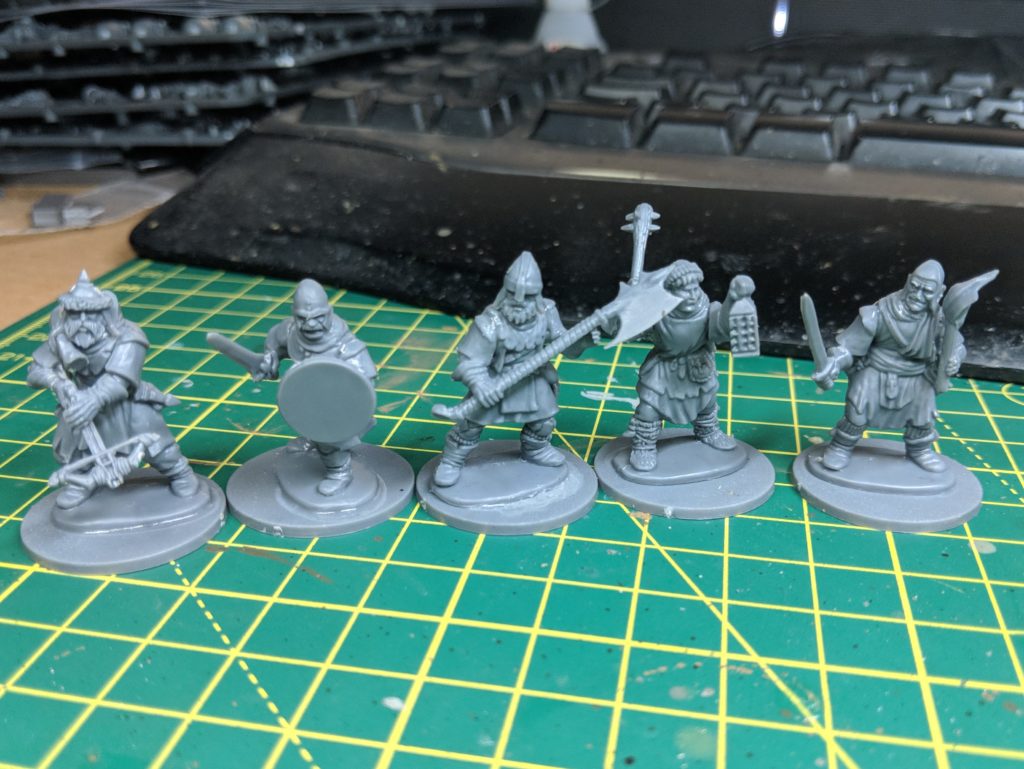 Group 2 was part . Again from left to right:

Of course, after building the first group of soldiers I realised that it might be time to pick up some of the other plastic kits so I could do some mixing and matching. After finding the sprues available individually on eBay, I got some ordered and then picked up some bases and heroes from Northstar. 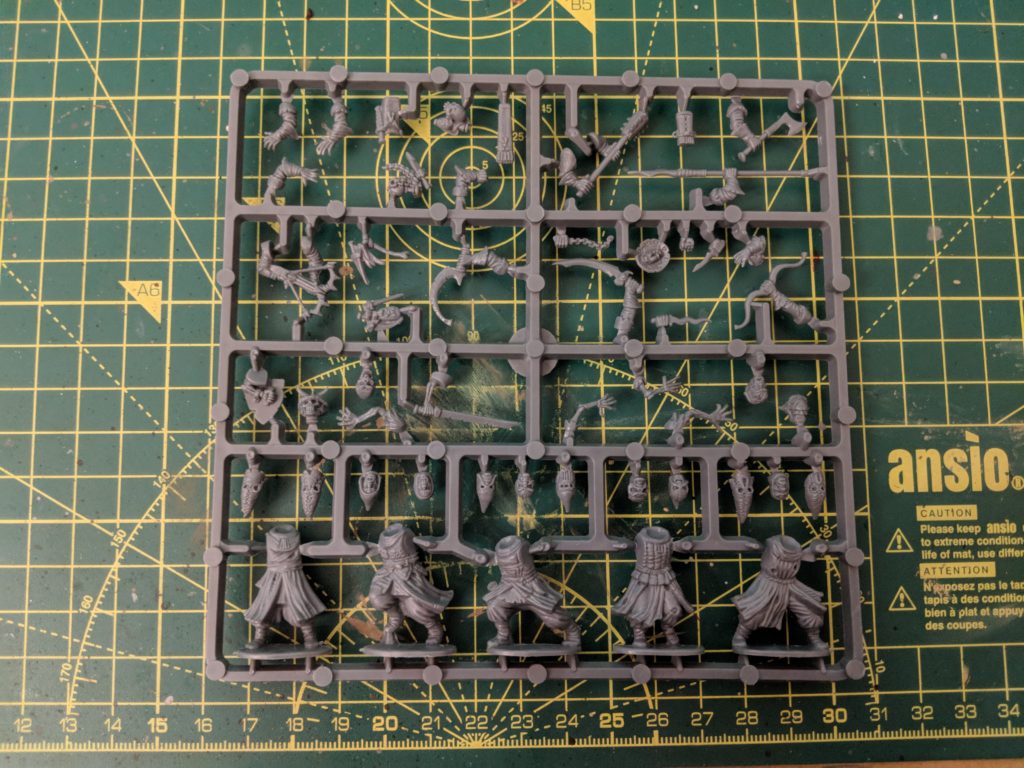 The cultists frame follows the same basic idea as the soldiers sprue – 5 bodies and a pile of accessories. As well as equipment with a different style to it, the spure has some cool additions to theme some of your characters. There are several skeletal and zombie parts (including heads and arms) so you could easily assemble undead or reanimated versions of your goons if a necromancer is in play. I really like the heads – the hooded versions come in plenty of styles while the unmasked sets are packed full fo character. This sprue had a few more items that were designed to replace the hands of other arms so having a sharp scapel was useful. There are also a few sets of belt kit with bits of bone and mysterious bottles that just sell the point of this pack.

After having built the figures you see below, I can easily see myself going back and building more cultists when the situation demands a horde of robed goons. 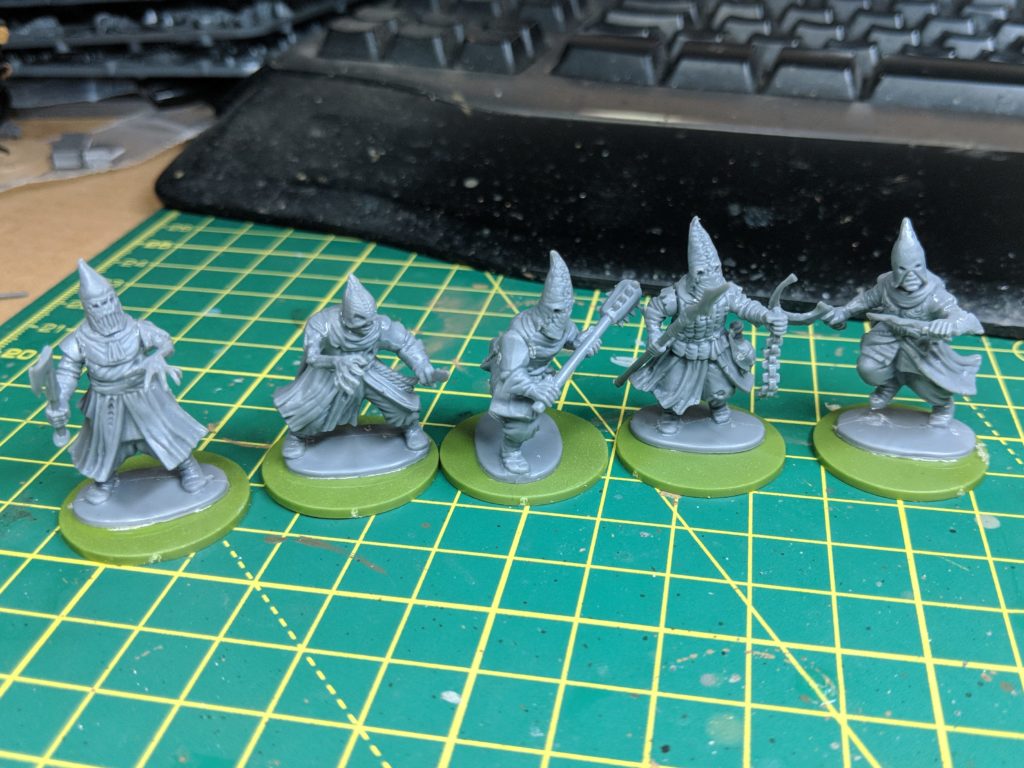 Using just the cultists sprue, I threw together these rather unsavoury looking chaps. As I theme I wanted to make these guys look very cult-y so it was pointed caps for everyone. From left to right: 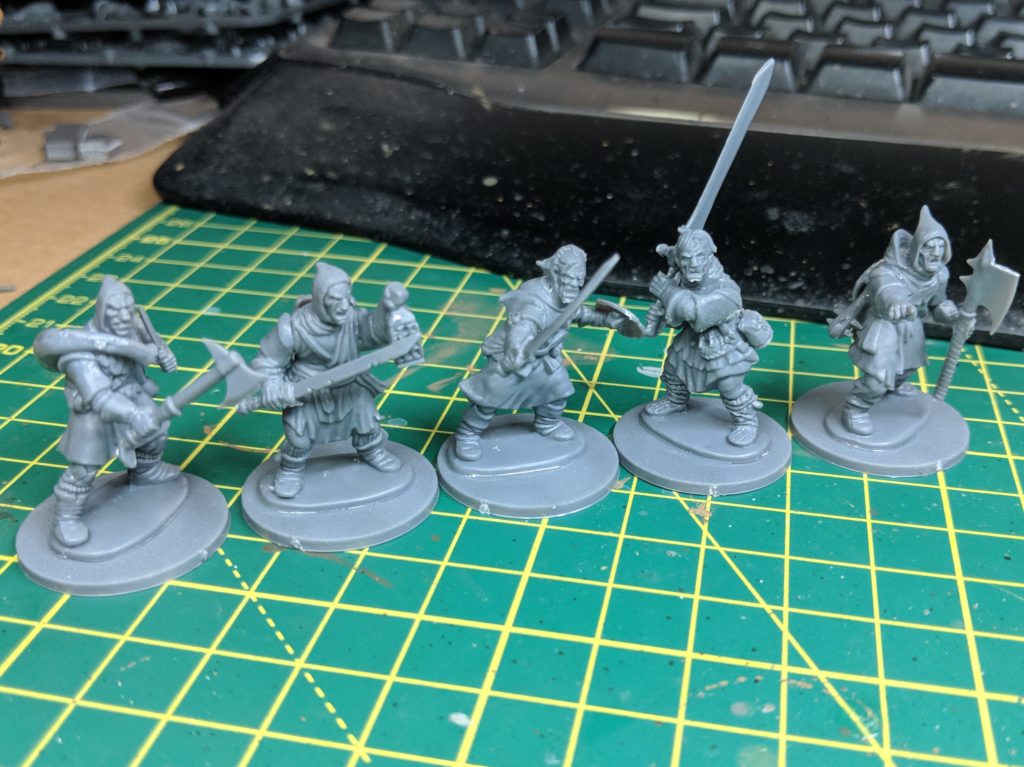 Of course the point of buying more spures was to start combing parts. The idea behind these was to be able to use them in multiple roles, either as other cult members, criminals or members of the watch (assuming they have reached the bottom of the barrel for new recruits). The heads from the cultists sprue (including the zombie ones) really give these guys a very different feel to the normal soldiers. From left to right: 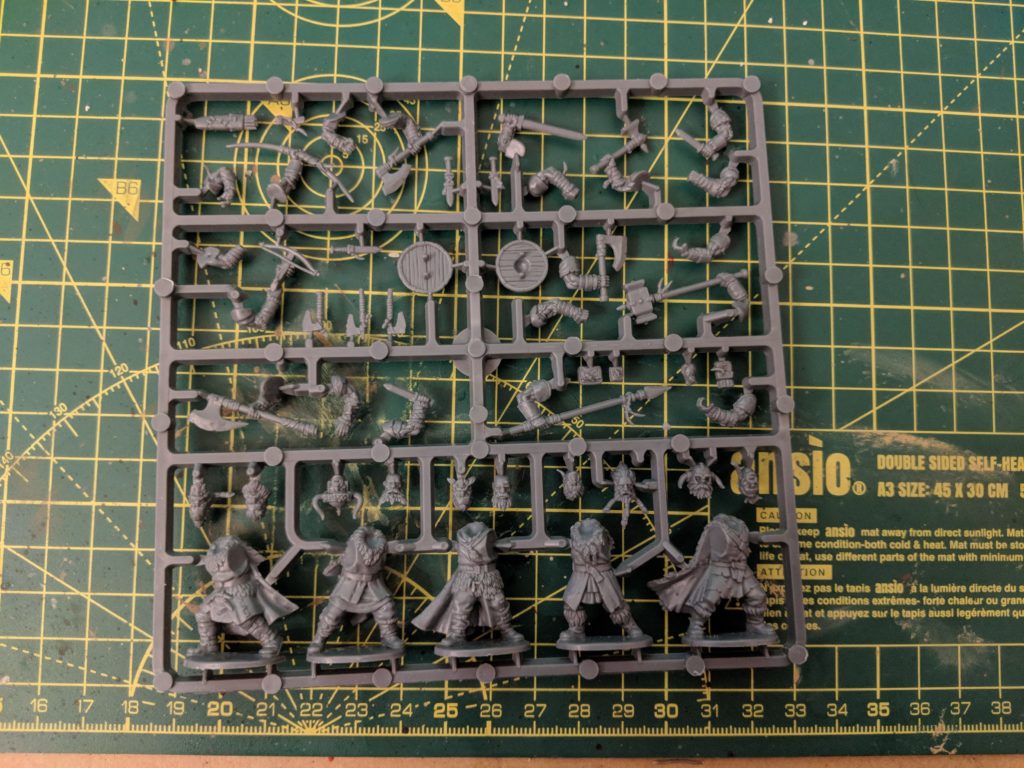 As you might have guessed the barbarian sprue also matches the idea of the soldier spure with five suitable attired bodies and then plenty of options for them. This entire spure screams “Big gits with big axes and big beards” from the posing on the bodies to the focus on axes and hammers. As with the cultists, there is a similar selection of weapons to the original soldiers spure but with a very different feel to it. There are also plenty of knives, axes and other little items to include on your figures. In fact, between the five barbarians and the five semi-barbarians I actually used up everything off this set. 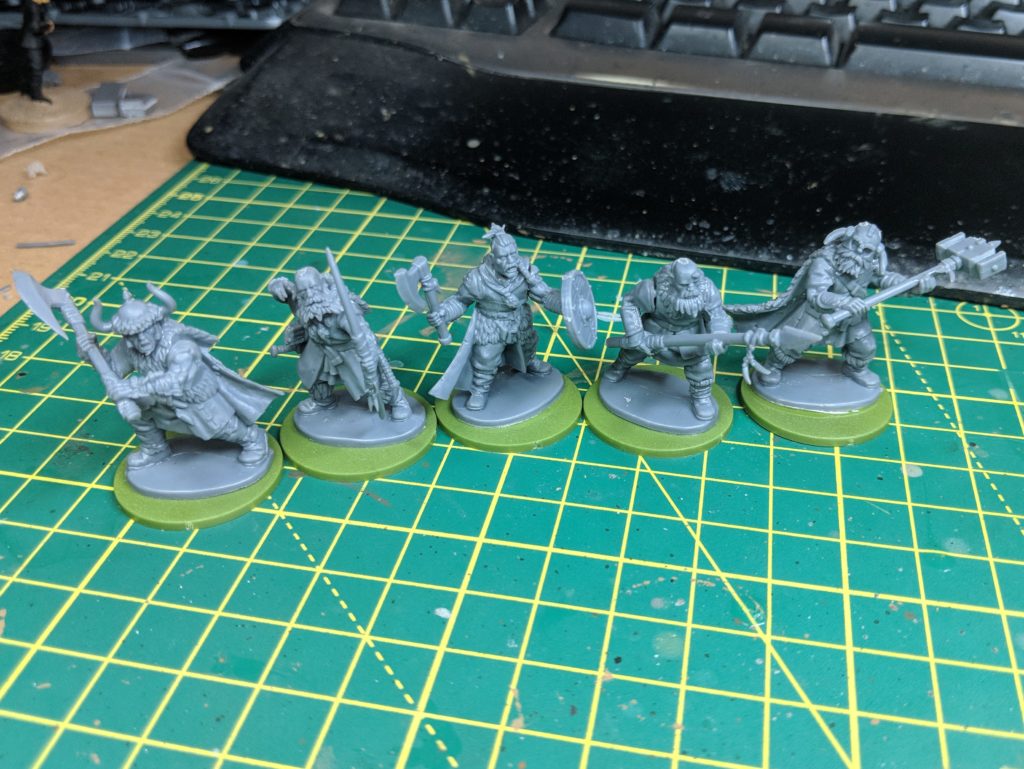 First up we have the full-blooded angry northmen and their furry cloaks to look at. From left to right: 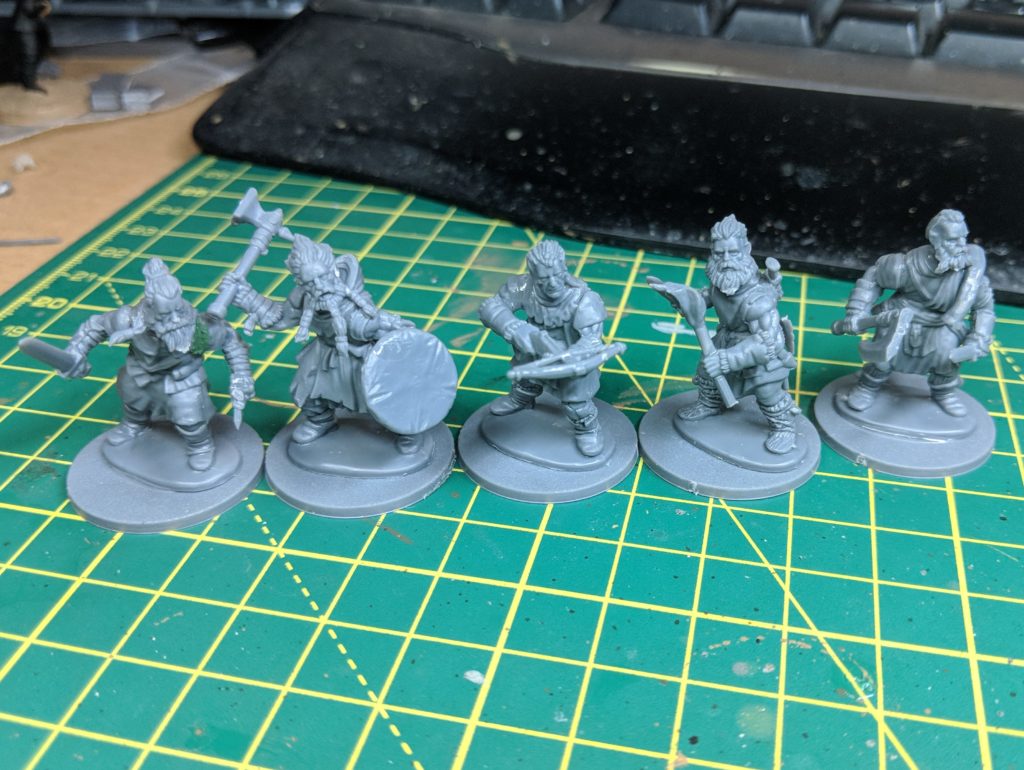 Like with the cultists, I swiftly got to work mixing bits. I think this combination of soldier body and barbarian heads works really well – it makes them still look like part of the civilised group but still wild like their brothers outside the city. From left to right: 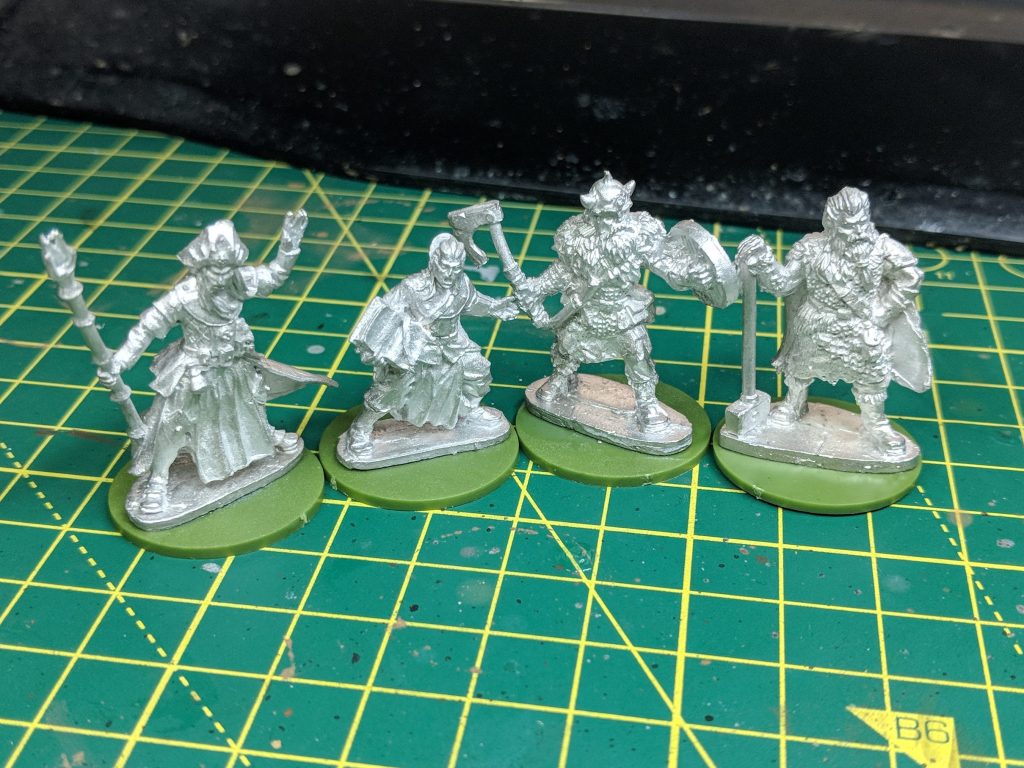 Alongside the bases I ordered from Northstar, I realised that I needed a few other items to make the order sensible (and not just postage). Thinking more about my plans for what dungeon crawling might eventually entail (and delving into the metal figures in Northstar’s Frostgrave range) I decided that I should get a few villains for the piece. The plan is that the barbarians and cultists represent two different threats to the city above and that conducting dungeon raids would eventually reveal their plots. As such, I’m sure the groups will need some characters to get involved – perhaps to turn up and get rid of them meddling kids.

For the cultists I picked up the Lich and their apprentice. I love the sculpting on these figures, with the Lich looking terrifying and the book wielding side kick like the slimy weasel that escapes from the heroes at every turn. Open Combat doesn’t currently have a magic system other than counting certain abilities as spells (although a supplement is coming to fill this) but I have a few ideas on how to make encountering either of these two a bad idea for your party. For the barbarians, I went for bigger badder beardier. I went the Barbarian Knight and Templar set. The hammer equipped chap will probably be the chieftain planning to take over the town while the horned helmet chap work great as his second in command. 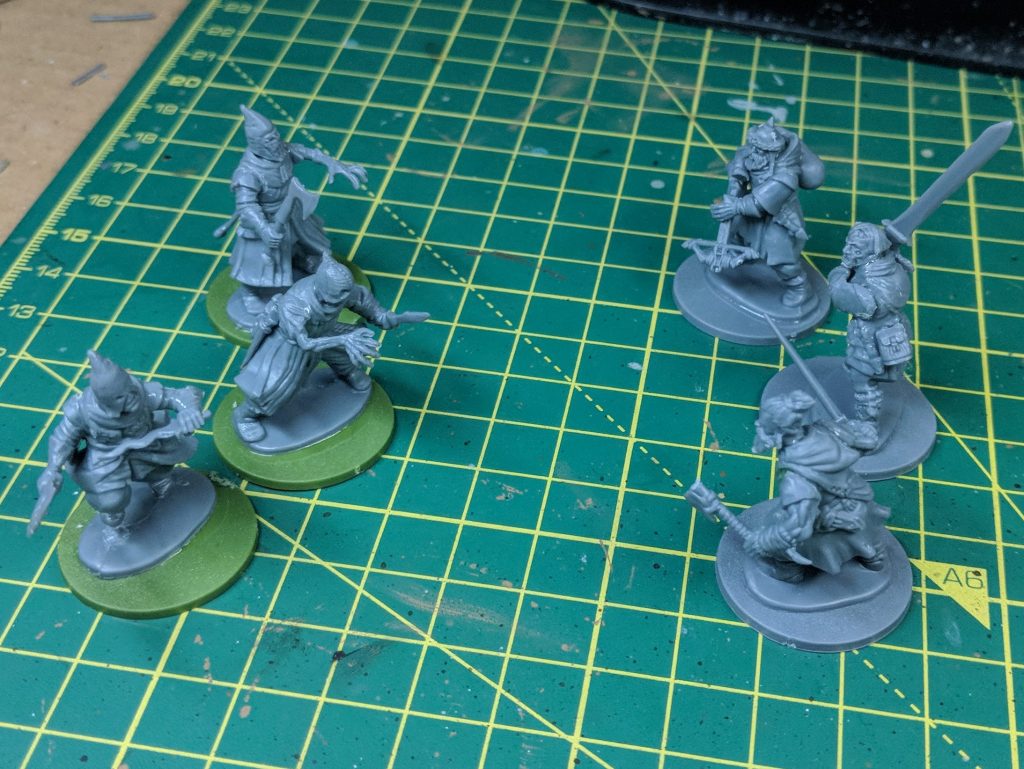 So there we are, the first step is taken. I am a massive fan of the Frostgrave range so far and it’s very hard to avoid picking up more of their figures to fill in the rosters. I’m also quite excited for the female adventurers coming soon and will probably take a look once they are released.

The plan for the next few weeks of side project is to start getting these figures painted up. I would normally base with sand, but I think more of a stone/dirt colour for these guys. I’m also going to do some more writing work, nailing down the back story and getting the rules for mission and dungeon generation done. And I probably need to get a few games of Open Combat in to get some more play time with the rules.