Let’s start this Wargaming Week, covering the 30th of July through to the 5th of August.

This week’s main post was taking a look at Empress’s Strykers, in both ICV and MGS versions. These guys have been sat undercoated on to-do list for over a year but I just hadn’t got round to doing the final touches to them. Overall I really like them and I’m already thinking about picking up a few more as I get ready for turning the US Army troops into a platoon sized force.

This week also saw the first post of Side Project 1, covering me building the fantasy soldiers that will be going into the dungeon. It’s been a really nice change building plastic model kits and I’m tempted to go back and build some more adventurers and bad guys once I have the first batch painted up. I also need to work out what I’m going to do for the bases as my usual method won’t look really suitable for dank caves underground.

Also hello to all the new people joining ChargeBlog for the first time! I’ve started increasing how many sites I publish to so more people can see what I’m working on. Hope you all enjoy the site, the Something for the Weekend category is full of feature posts.

Miniature Building Authority, who ran the successful kickstarter earlier this year for LMTV and FMTV trucks, have shown off the first glimpse of their HEMMETT. These look pretty sizeable and will come with a good range of cargo types including gun truck. Plan is to release in September with pre-order soon. There isn’t a huge number of trucks available for 28mm wargaming so these are worth keeping an eye on.

Crooked Dice don’t appear on here all the time but when they do it’s normally in style. They have just done a massive release for their upcoming Apoclypse setting including lots of stuff for setting up your vehicles for the harsh wasteland. Most of it is a bit too wastelandy for most modern settings but the stowage packs look just perfect for creating your SF vehicles. I really like the Landy above so might take a look at picking some stuff up for less military forces in Bazistan.

After much teasing the Cold War US from Under Fire Miniatures are now out. Three of the five packs are avaliable right now with two more (ATGM team and platoon command) coming soon. These are Under Fire’s usual standard of sculpting and I’m frantically trying to work out how I can justify picking up a set. Maybe its time to work on Zaiweibo’s army? They are up on Under Fire’s site so go take a look.

White Dragon continue to keep teasing us with more new releases. This time, it’s the quad bikes! I saw the prototype for these back at Chillcon and I know a lot of people are very excited for them. The fact they are now in white resin means these are very close to release. Keep an eye on White Dragon Miniatures for future updates.

Spectre Miniatures are hard at work on some new stuff but they drop a photos of some really tooled up vehicles. We’ve seen a preview of one of these vehicles before (the Humvee mothership at the back) but it’s great to see the different chassis all modded up. Most of the items are recognisable from the current stowage pack but there are a few items we haven’t seen before like the Javelin tube and FLIR camera. Expect more news coming soon. If you want some more pictures, a few close ups have been released on the Spectre Facebook group. 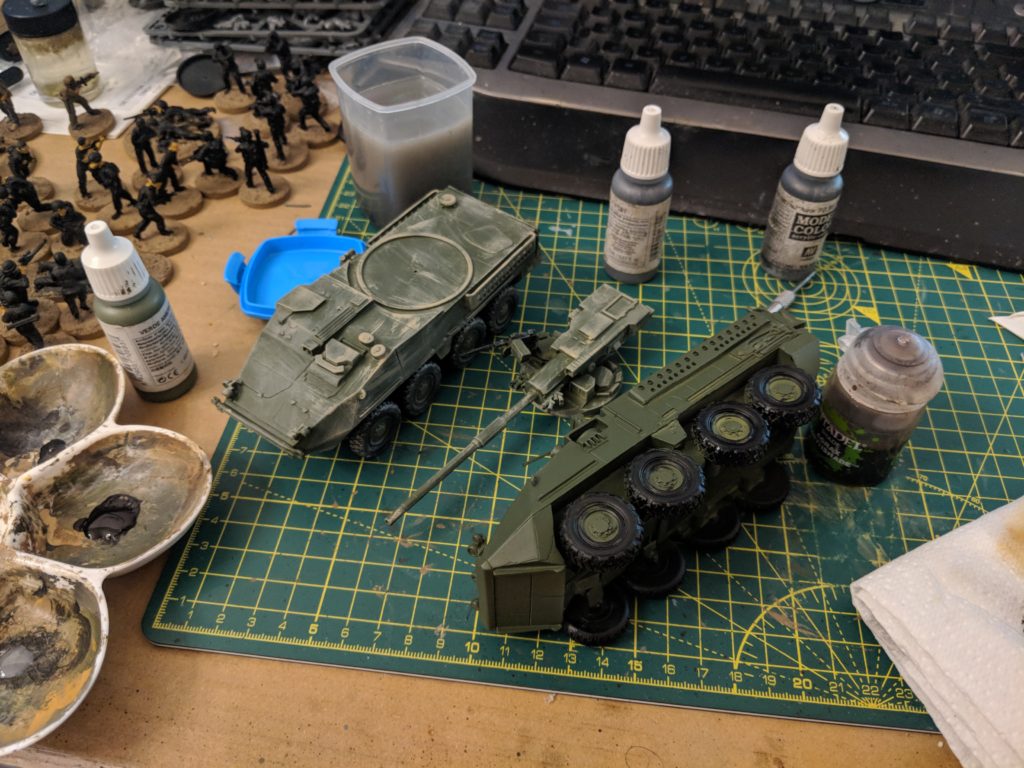 As you might expect, the main thing this week was finish the Strykers off. It took me a grand total of an evening’s work to finish them off from the undercoat of green, just painting up the black elements, adding metal detailing and then dust for the final effect. 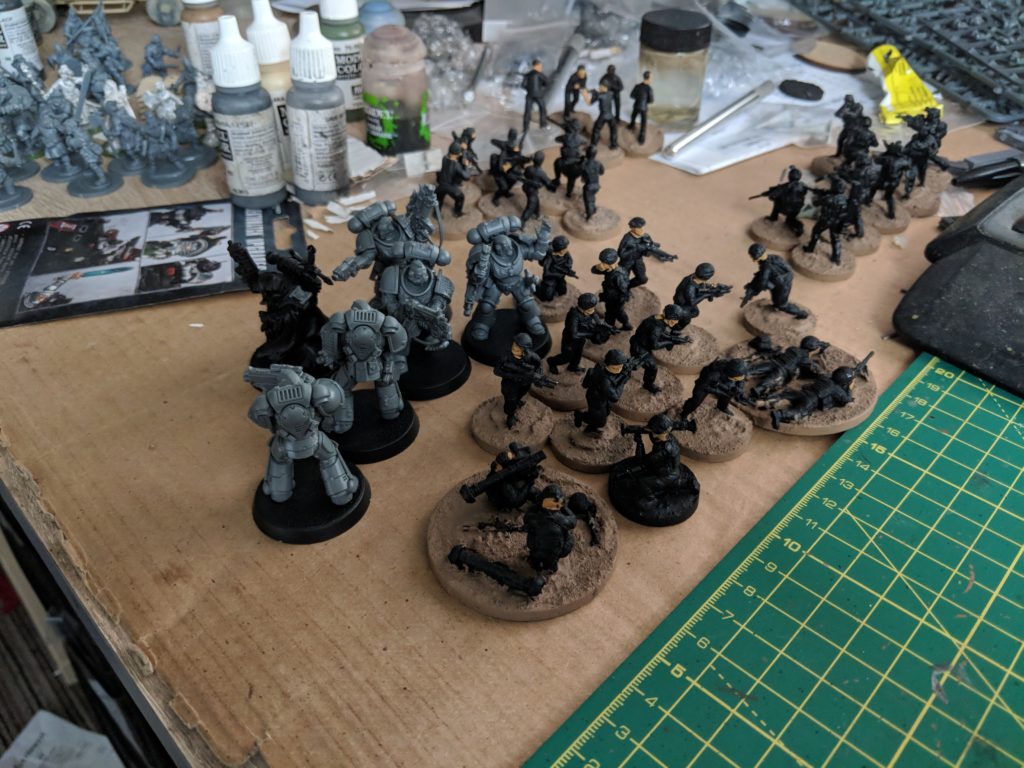 I’ve been busy with work for most of this week (meaning also that I ended up missing my local show Claymore on Saturday) so the rest of my hobby time has been pretty limited. However, I did fit in a little bit of time to put another pair of Space Marines together and start work on finishing off the pile of US Army guys sat on my desk. These guys should be the subject of this week’s post thanks to the relatively simple paint scheme – expect another Range Impressions soon.