When most people look for terrain to fill their MENA board, the first thought goes to the classic adobes. Although these mud brick buildings (and their variations) are found throughout the region, there are all sorts of other buildings suitable for the tabletop. For a while, Sarissa Precision have had a range of colonial buildings designed for North Africa in WW2 available in 20mm scale. A year or so later, and with much rejoicing, the entire collection has been released for 28mm. As someone looking for some grander buildings to represent the more urban areas of Bazistan, I just had to pick some up. I ended up going with some of the larger buildings, perfect for building some traditional streets. This is going to be an initial impressions (unpainted and missing some of the detailing greyboard) as I haven’t chosen the modifications I want to do to “Modernise” them. 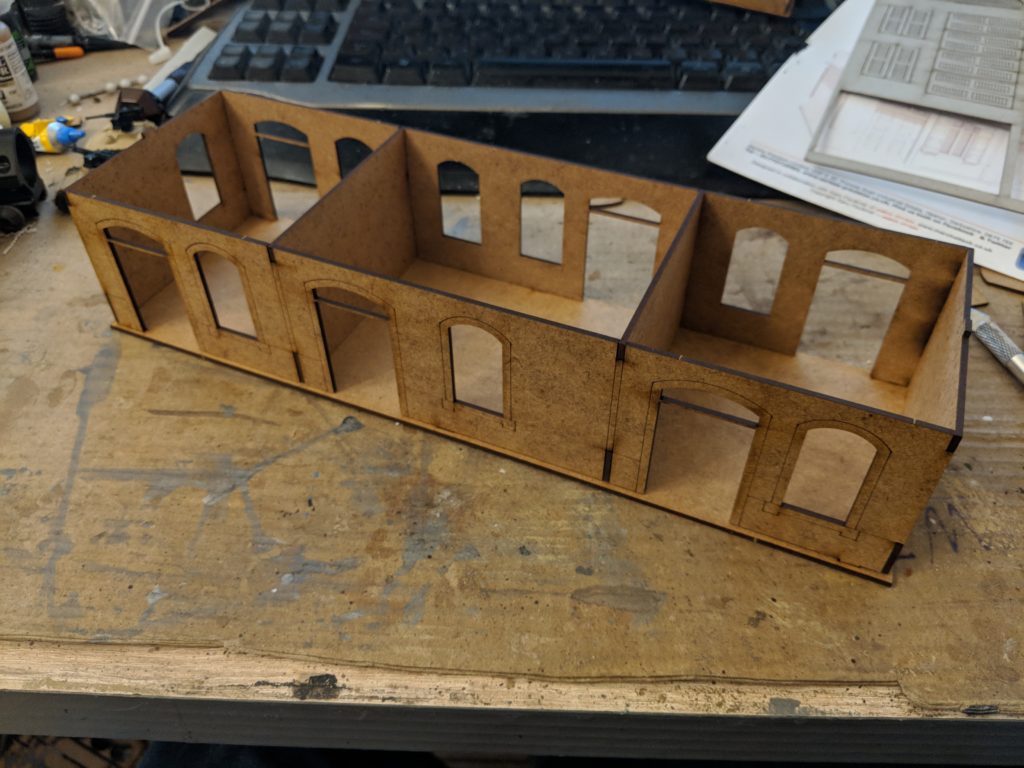 As with all Sarissa Products, the building is a combination of thick MDF for the structure and greyboard for additional details. A common element of these buildings is use of large greyboard panels for the doors and window; these sit on the inside of the building to help increase the sense of depth. Additionally, greyboard window shutters are included and can be glued in either the open or shut position. The MDF is well cut and comes out the sprue with no tearing or damage. Although I always recommend a dry run when building MDF, all of these kits went together with ease. 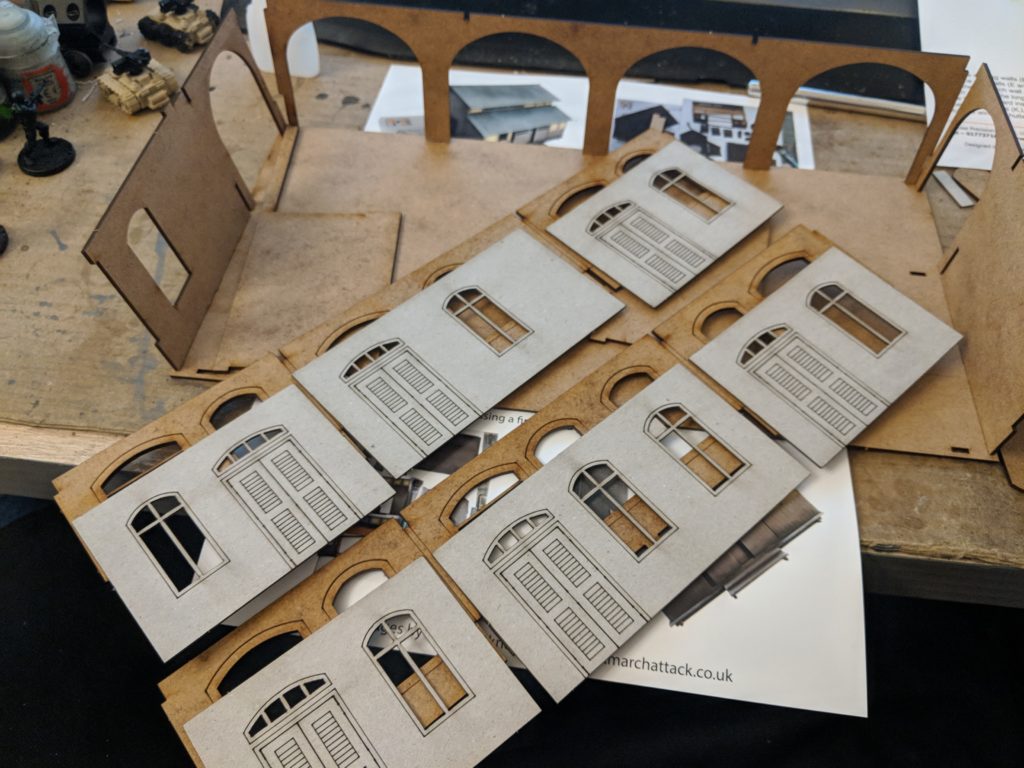 To improve gameplay, all the buildings have removable roofs secured by MDF tags at either side. The roofs also provide some cover, although it’s only half height in the corners and the front feature. Multi-storey setups have the same combination of locating lugs allowing for quick removal and access to different levels. One comment for these buildings is that there are no interior staircases modelled in order to maximise space on the inside to place figures so moving between floors may require some abstraction.

Additionally, the range includes damaged versions of all the buildings. I haven’t picked any of them up yet but from looking at them they have done a nice job keeping them as terrain obstacles while still making them look like they had been part of an engagement.

With the basics covered, lets take a look at the specific examples. 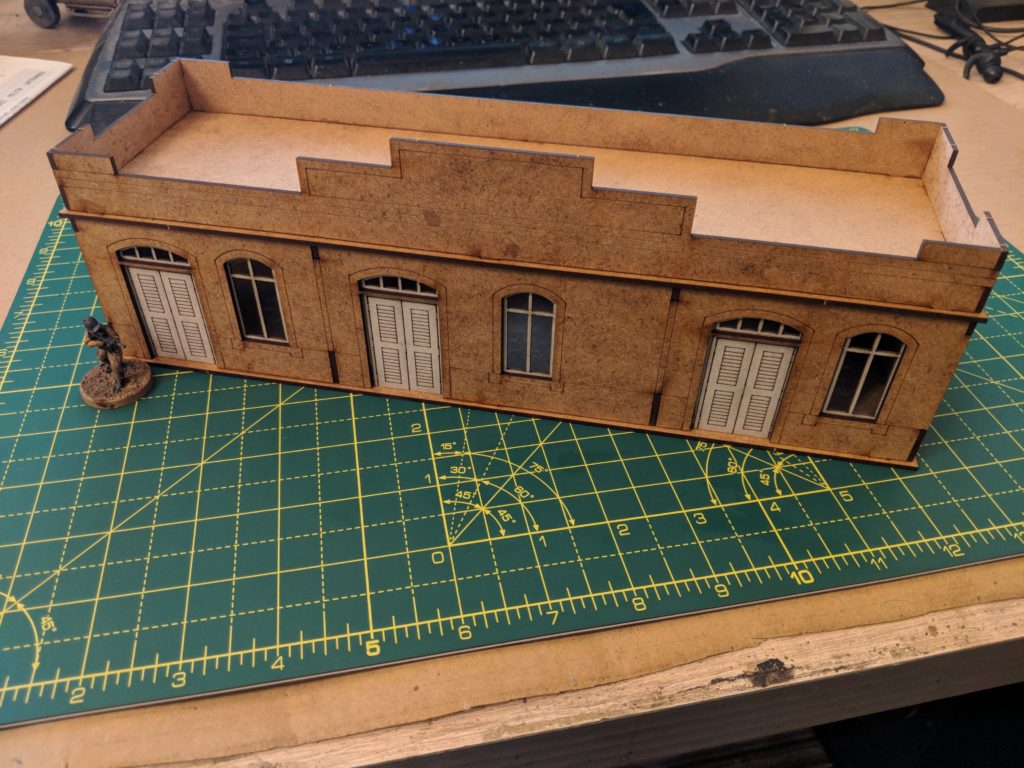 The first building is a large single storey build. It’s comprised of three units, each with a different layout of windows and doors. 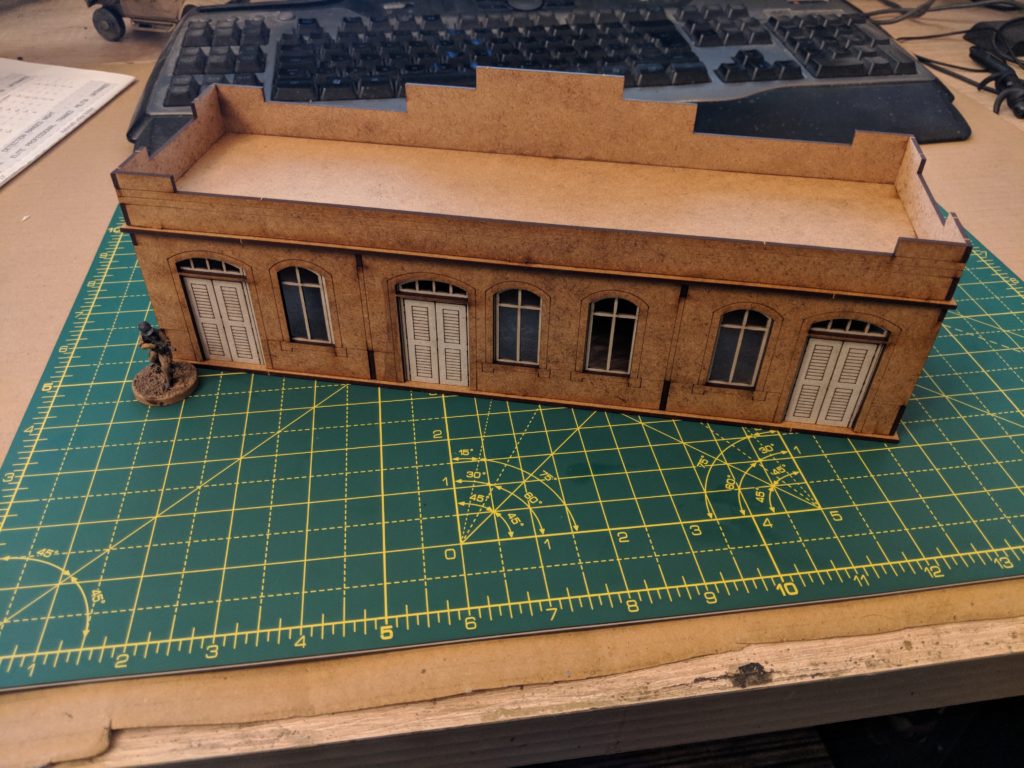 The rear view shows off the different arrangement of windows and doors. The end pieces also have extra detail, such as cracks in the coating of the wall or an additional window. 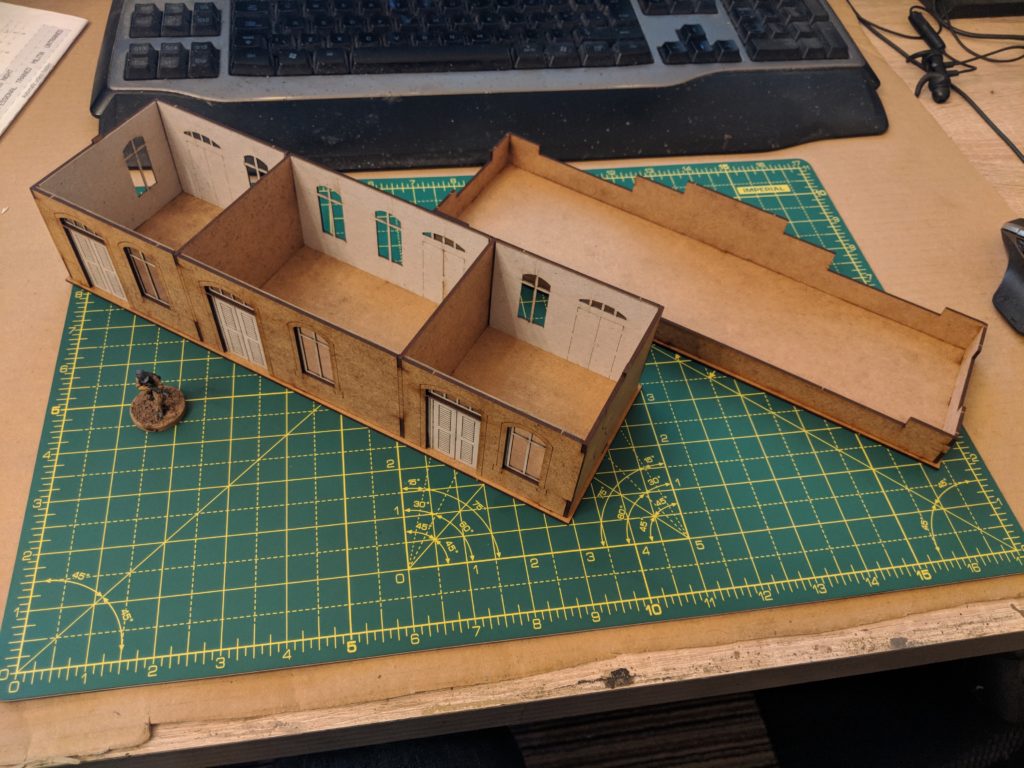 With the roof removed, you can see there is plenty of interior space for figures or obstacles for when you’re fighting from room to room. 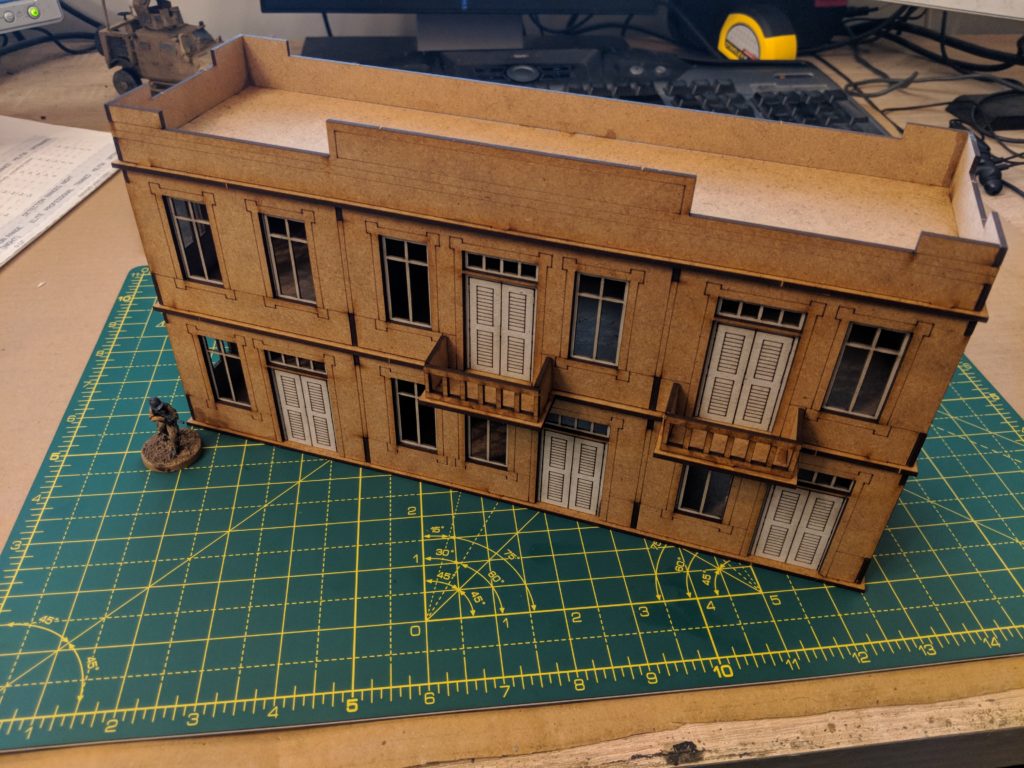 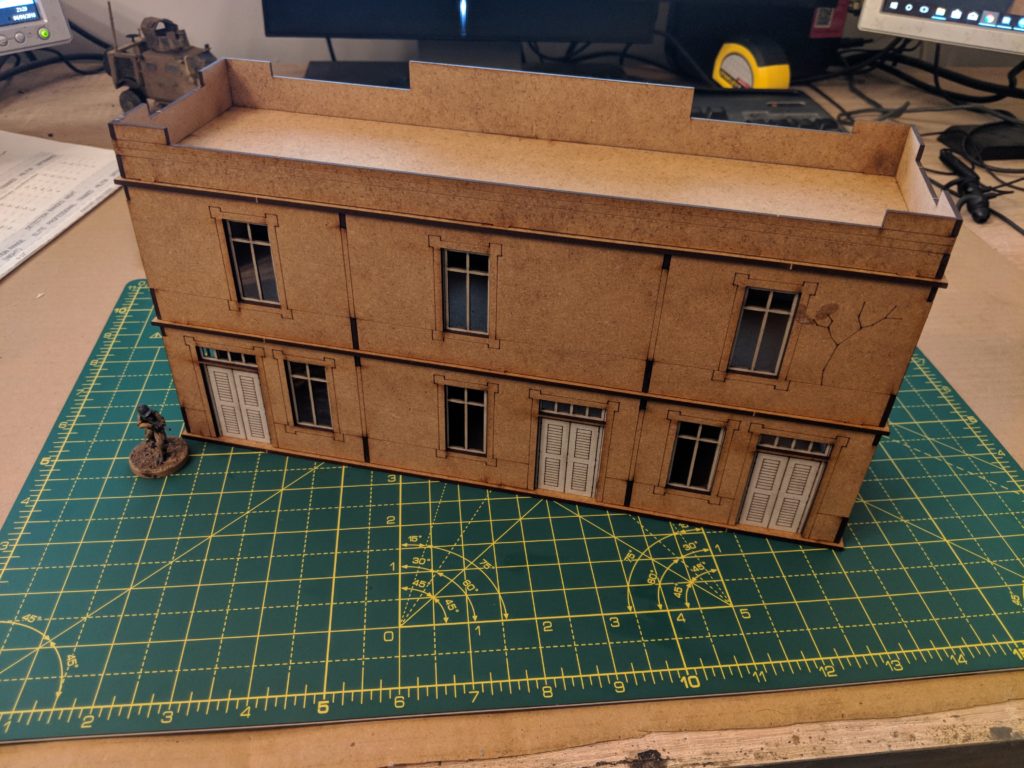 The back still has plenty of windows meaning it’s got plenty of place for figures to shoot out of. Both end pieces also have windows in them for all round viewing angles. 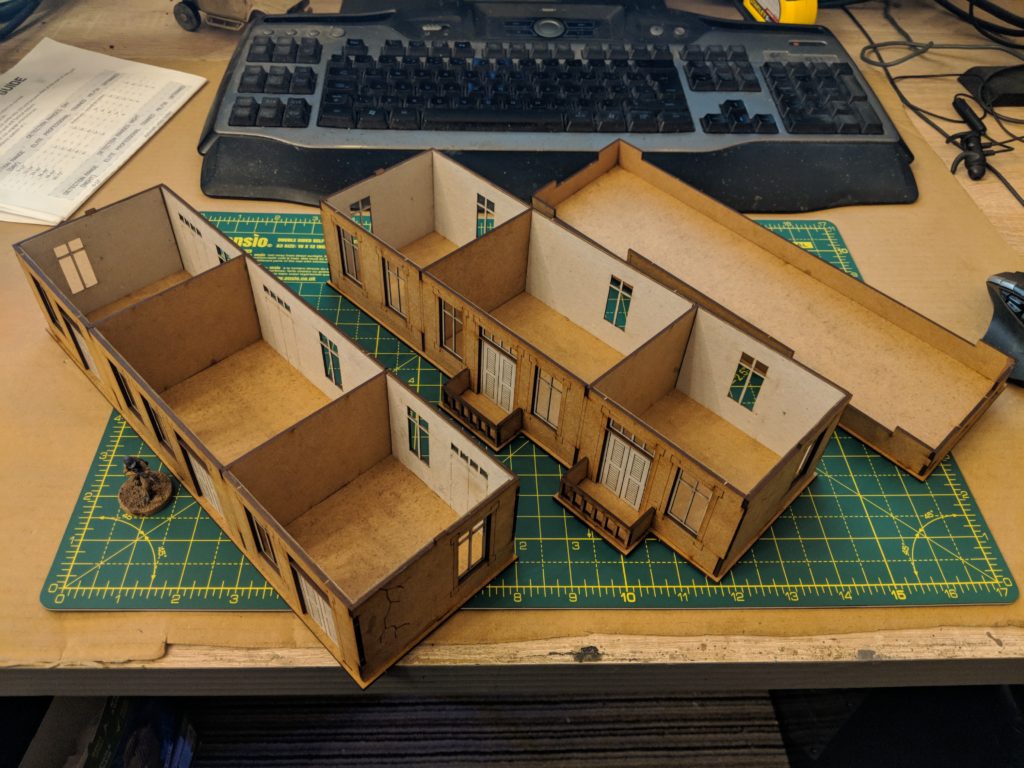 Another addition is the two balconeys on the first floor. If you’re wanting to have figures on 25mm bases standing on them, you will need to open the doors behind them as otherwise they won’t fit. 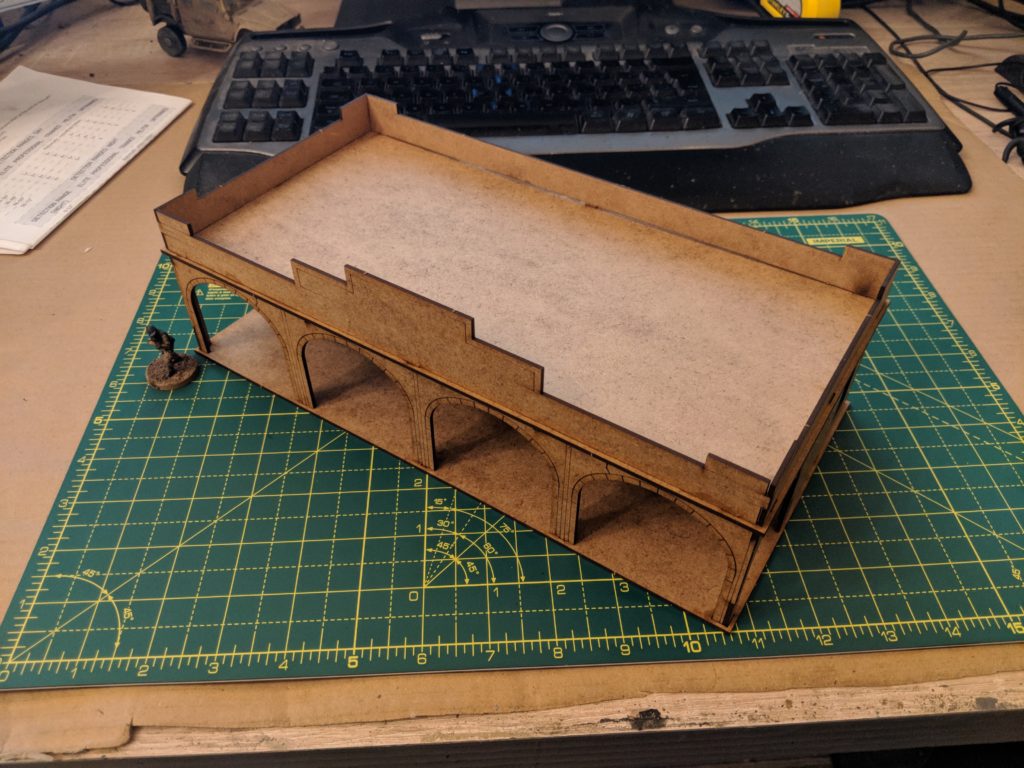 The next two buildings are labelled up as part of the Souk, ready to form the local marketplace or bazaar for spy related shenanigans. The common feature is arched and covered area, a perfect place to add some small market stalls or to get out of the sun. For the single storey building, it’s very similar to the Large Single Storey building but with a much larger footprint. 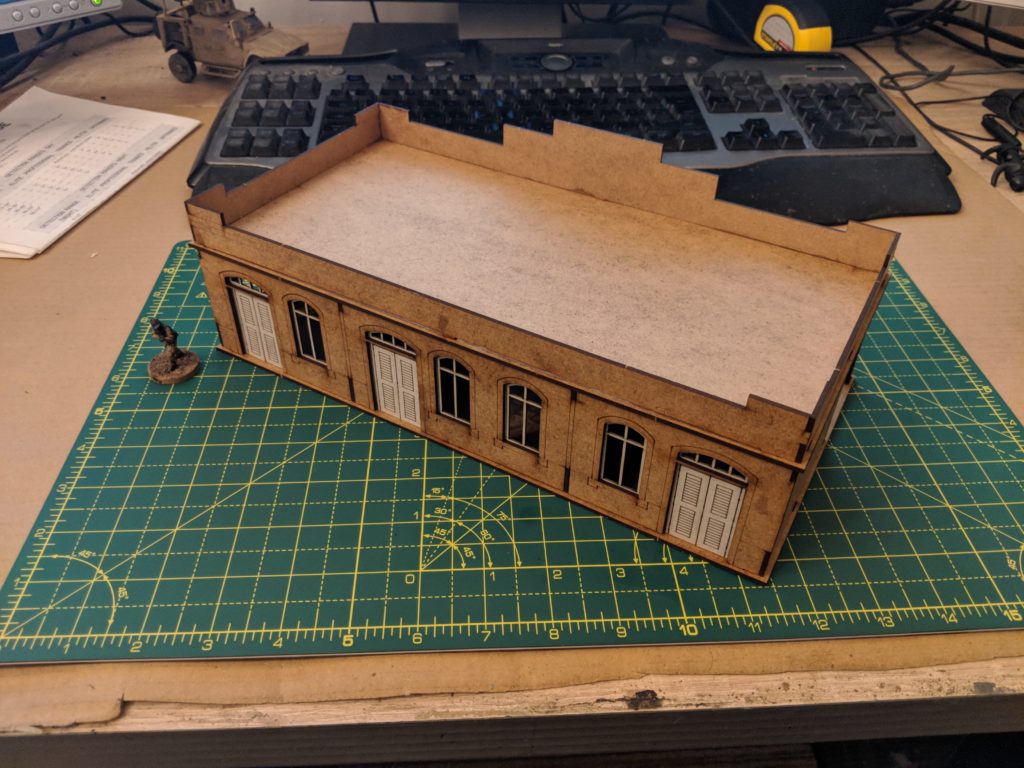 Anyone looking at the this picture and comparing to the images on the store may have noticed something strange here. For the first time I received a miscut piece from Sarissa – the two long walls of the building were cut with the same end connectors rather than the different one needed to fit into the middle of the side walls. What this does mean is that I’ve managed to get a different layout than most with only some smaller gaps needed to fill. Sarissa provided some great customer support, another positive for them. 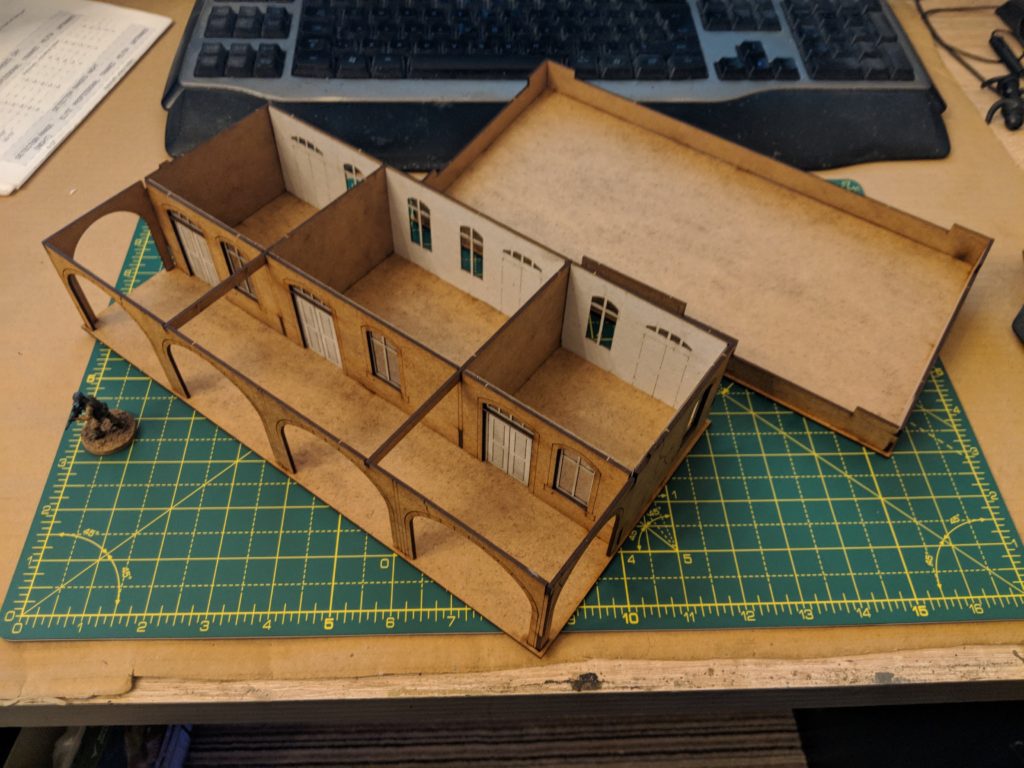 The addition of the covered front area adds some more room for gameplay around the buildings as well as a much larger roof element. Aside from that, the interior is similar to the one storey building shown above. 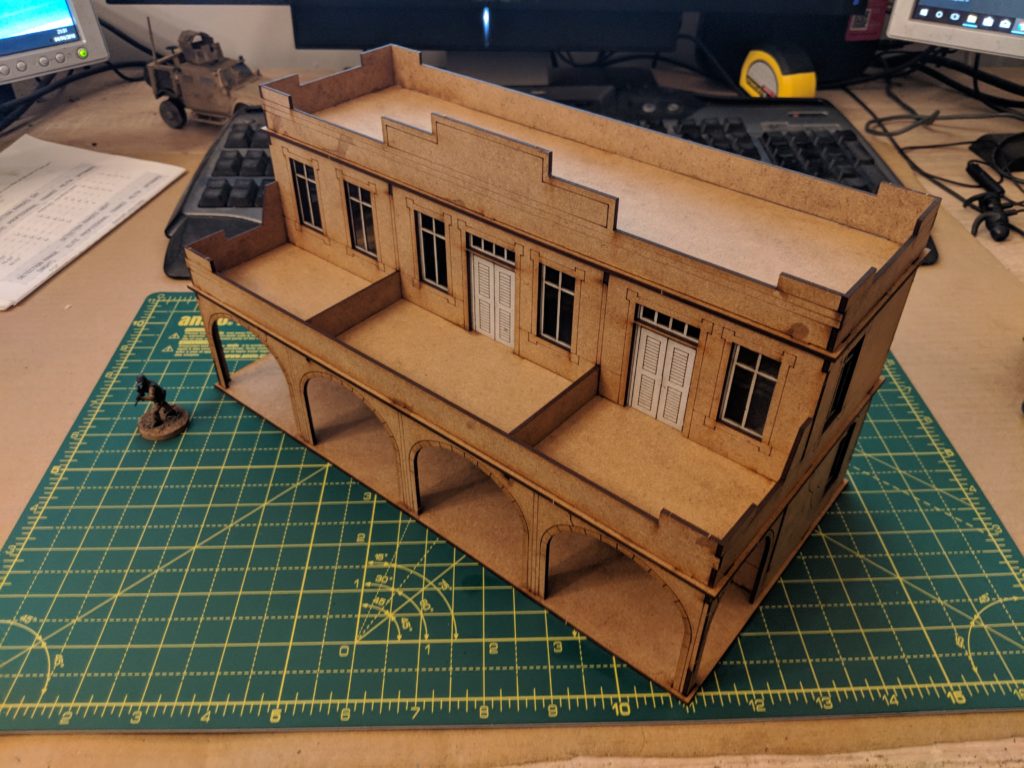 To go with the one storey building, there is also a two storey option for players needing some more vertical space. As you can see, the expanded foot print of the arched area helps to give the upper floors proper balconies with plenty of space for heavier weapon teams. One of the balconies seems to be lacking door access so expect troops diving through windows. 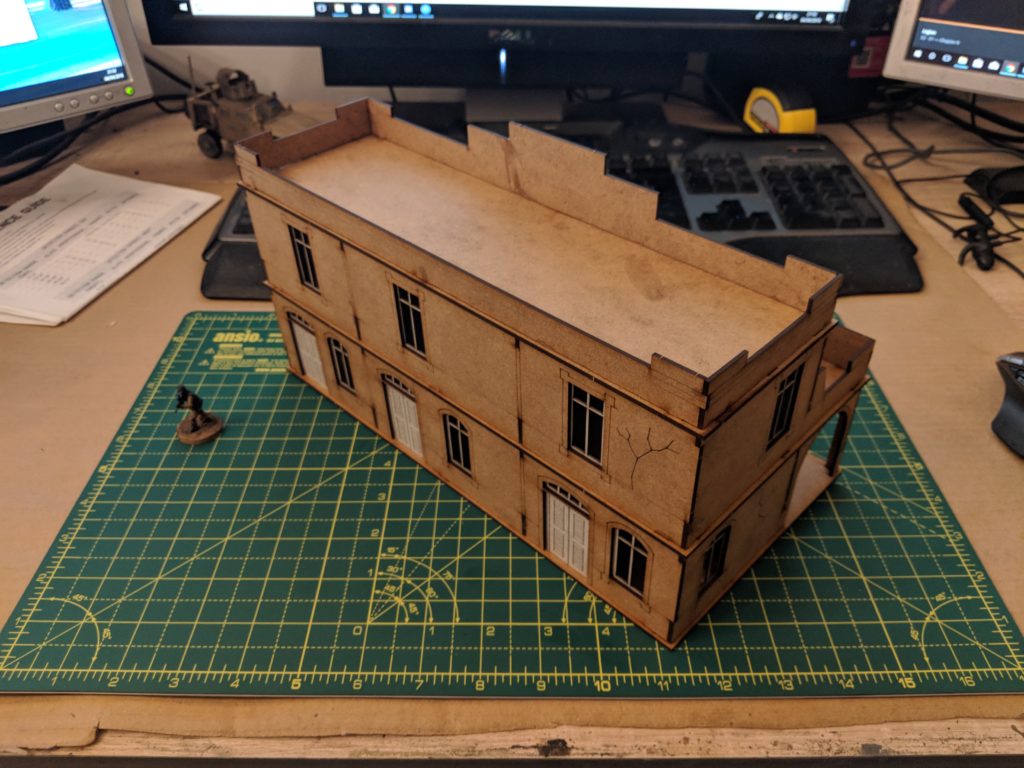 The back of the building is similar to the two storey building above, once again with all round line of sight through the windows. 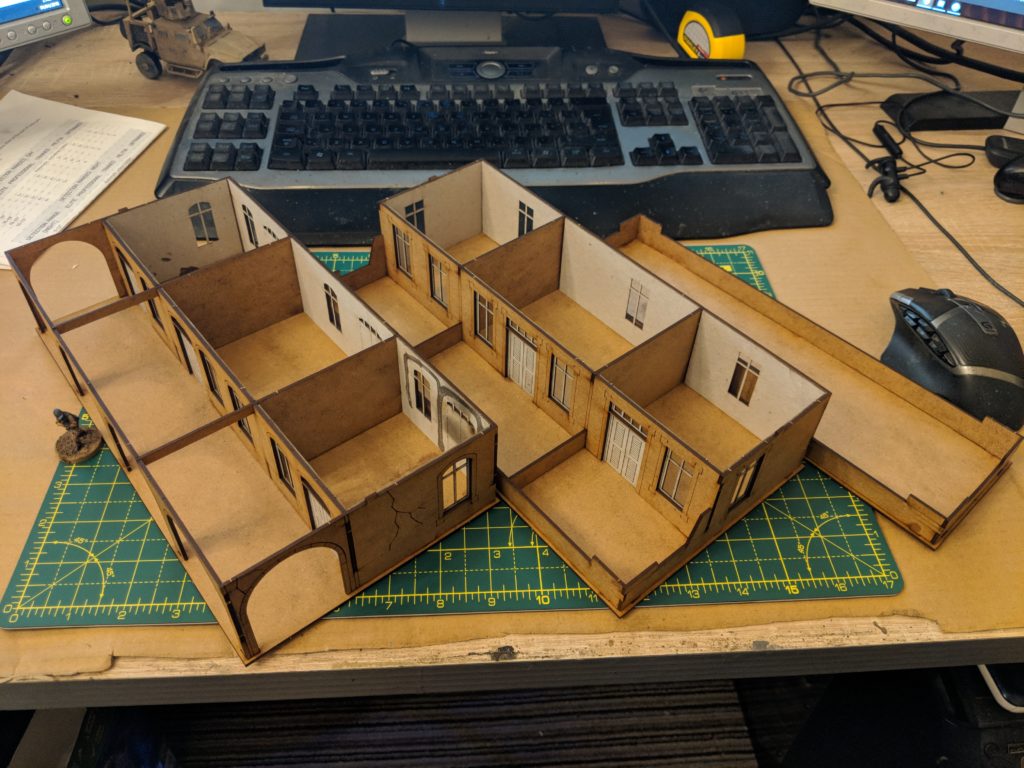 With access to the balconies, this building could be quite a difficult one to assault and I can see lots of fighting from room to room. The balconies add some options for out flanking enemies in other parts of the upstairs. 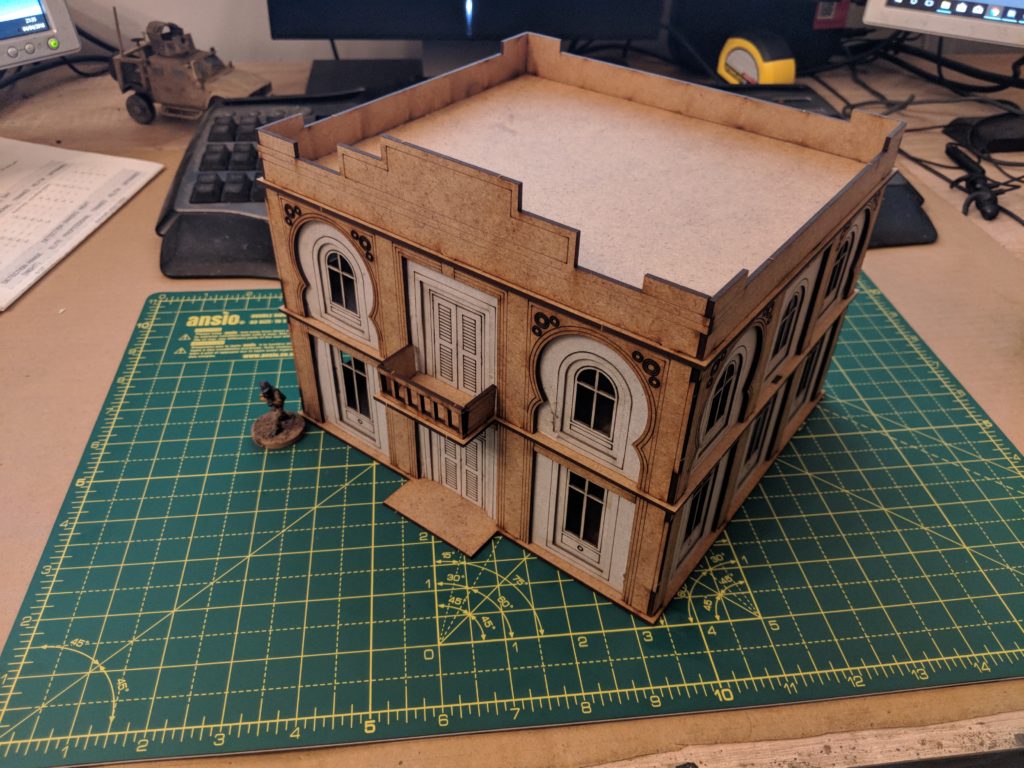 The last building is designed to be a centrepiece, the local hotel or a government building. It has a certain amount of finery not seen on the other buildings with arches and decorative elements. It also has a balcony perfect for local leaders or agitators to speak from. The roof also passes the Little Bird test so your D-Boys can deploy straight into cover. 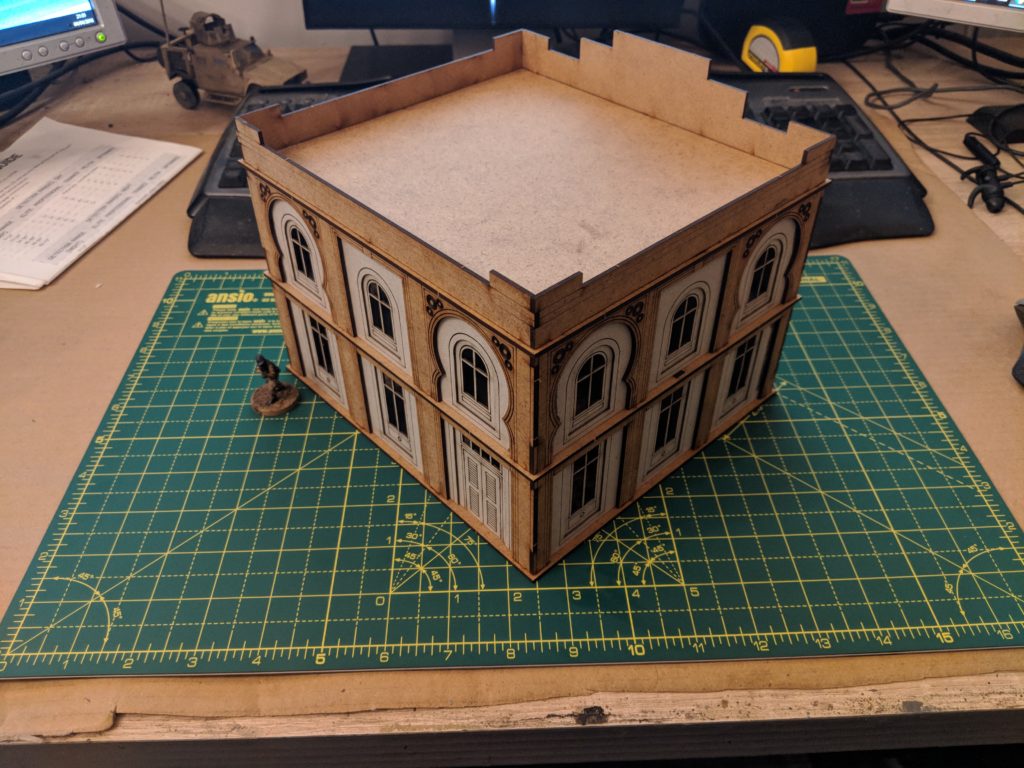 The rear shows off another access door, as well as more as the decorative aspect of the building. 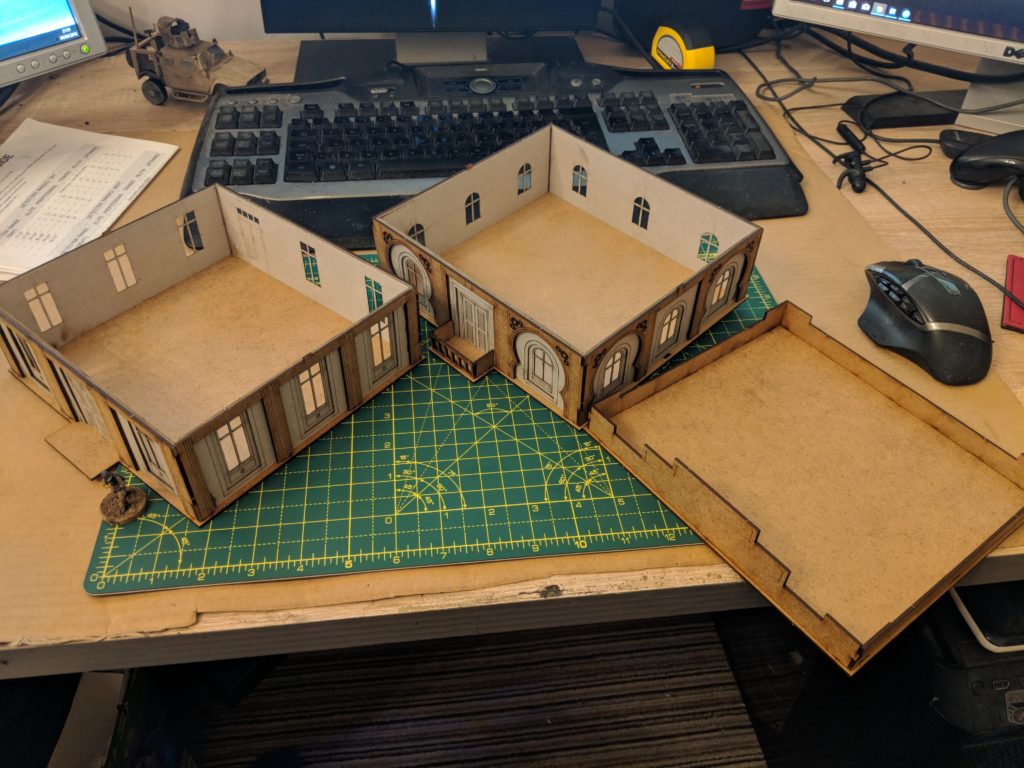 As you can see in the picture, the interior is entirely open with no interior walls. It would have been nice for some interior details on this building but I can see the point of leaving it open if you’re playing certain squad based games. With the sheer number of windows, putting full squads into the building will make it a pretty hard nut to crack. 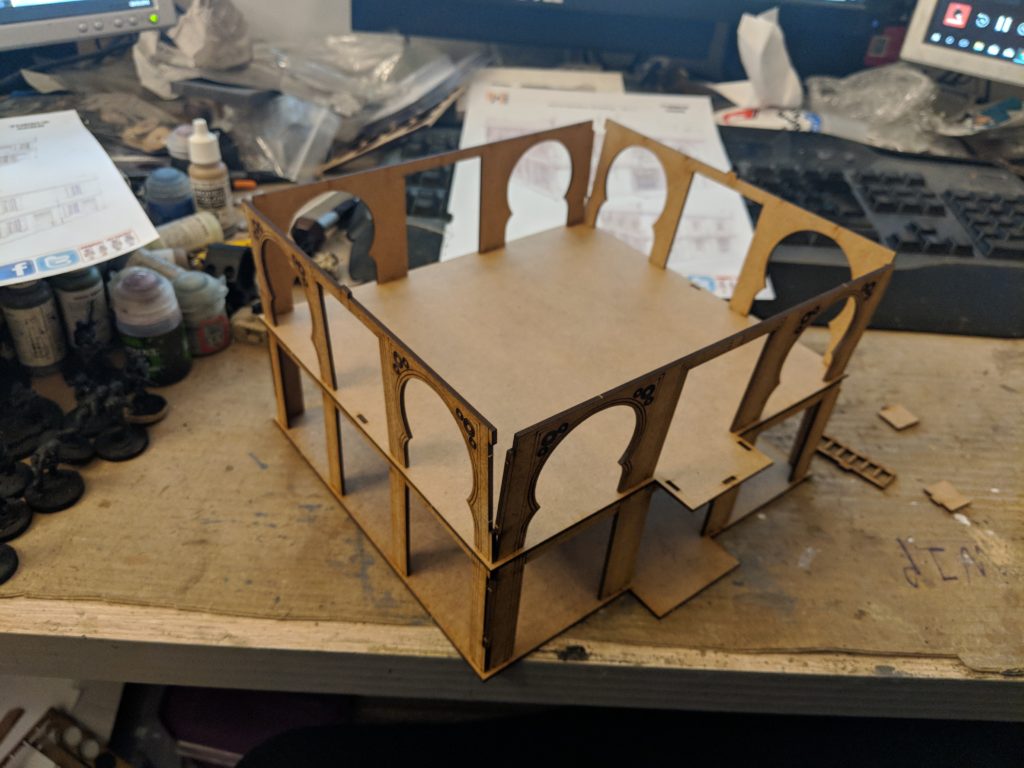 One interesting point about the construction of this building is that it’s actually made up with more greyboard than the other buildings. This is the MDF frame which provides the top layer and most of the structure. There are then two layers of greyboard to give a greater level of depth than is seen elsewhere which will look rather special. 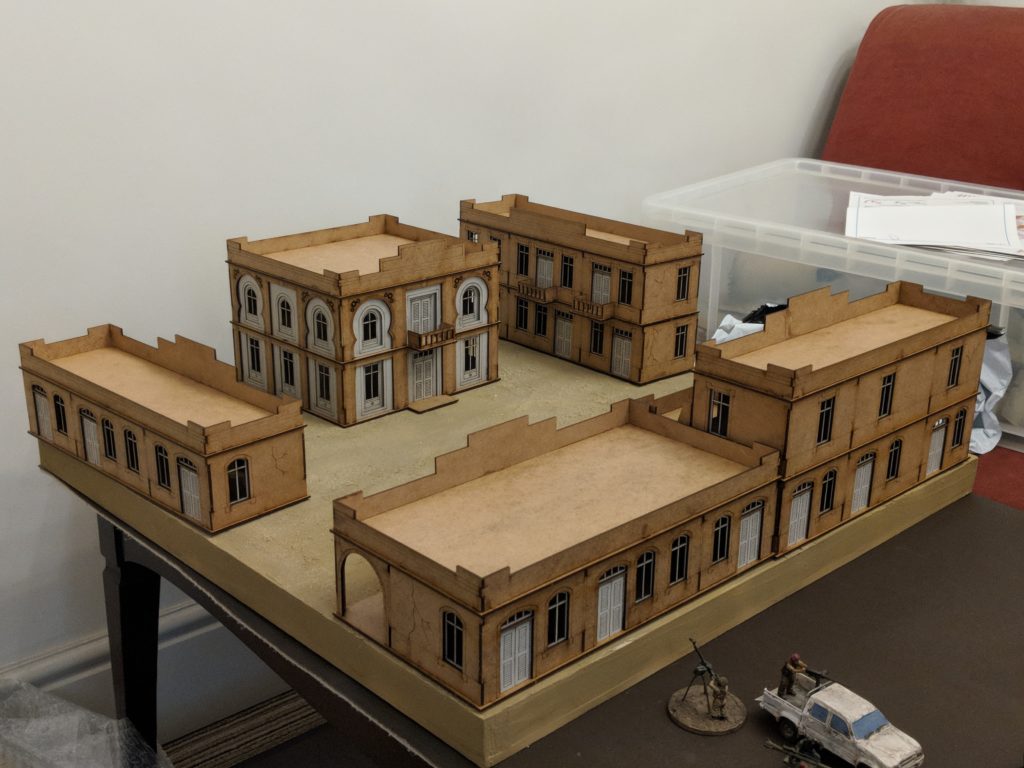 So what are my opinions on this range? Well it’s the usual high level of Sarissa quality combined with a style of building that I haven’t seen a huge amount of. With only a few buildings, the entire tone changes from a board mainly covered in adobes. For anyone wanting a more urban battlefield, I really recommend these. 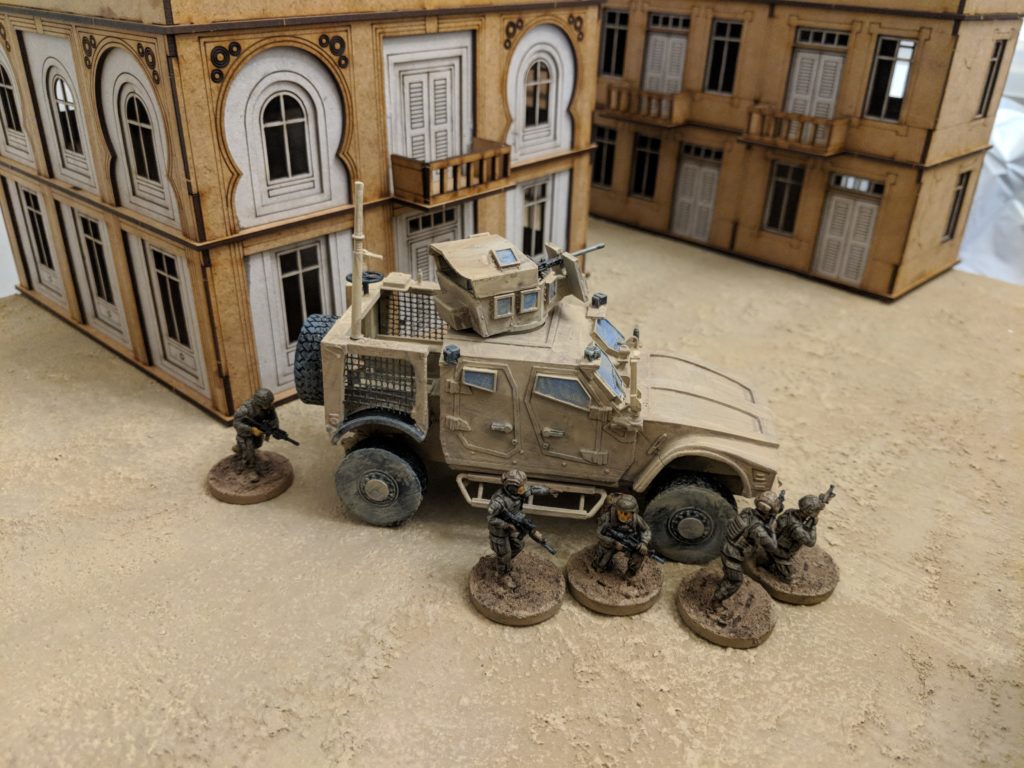 Additionally, this style is quite common across previously colonial regions and as such could be used for anything from the Middle East to the Caribbean. These buildings could also be a great starting point for more modern buildings if you don’t mind trimming details down or cutting holes. I’m really looking forward to getting my sleeves rolled up and making them look more modern.