Welp, the long-awaited Spectre Miniatures Kickstarter models just turned up today. Before I begin, its important to point out that the guys in Nottingham managed to almost nail the delivery date – the models turned up just under a month later than planned which works out among the better delivery differences than many of the other Kickstarters I’ve backed.

The figure range that Spectre showed off is focused currently on special forces operations in Africa with a selection of PMCs and specials forces teams going off against some African militia. I wasn’t too fussed about the militia guys but every single operator set looked sweet. I pledged for one of each of them, a total of 8 packs or 32 figures. Near the end of the Kickstarter, I upped my order to include an additional pack (the Nigerian Army team) to extend out the collection as they look like they will work for generic AK armed goons. Sadly, the Nigerians got left behind at the evac so I’ll be adding them in a separate review at a later date (should be in the next few days thanks to the excellent customer service from the Spectre guys) 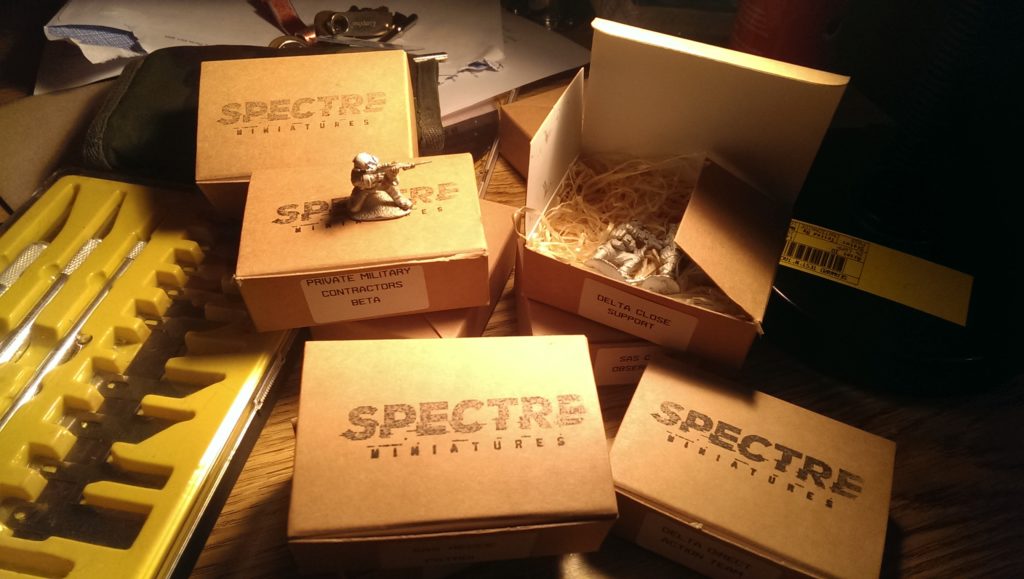 So first things first, I LOVE the packaging. Rather than the blister pack format most companies provide their figures in, the spectre models come in small neat boxes filled with packing material. Even opening the boxes feels special. Having a stack of them to work through is also pretty cool.

First of all, the overall impression of the models. They look superb. There is a very high level of detail across all the figures, with details like the strips of molle on some of the PMC guys easily visible. The guns are particular look great, with a selection of optics and other accessories that really help to give the impression of a well equipped force. The weapons do pose a problem though – as they are real scale rather than heroic they do have some rather thin barrels. Nearly all of mine ended up okay but sadly one of my Delta troopers got his SCAR upgraded to CQC version by accident. It’s not too worrying but it might be a concern for any future models. Cleanup was minimal, with a few bits of flash to prune. Most models are a single part but several of the models facing forwards (like the delta guys) need the gun gluing into place. In addition, the Bergens on the SAS and the NVGs for the delta boys also need gluing but most of this was super easy. As someone bought in wargaming by Games Workshop, I do find it a little odd the figures are based on their own small bases rather than the round bases but it’s not too much of an issue. 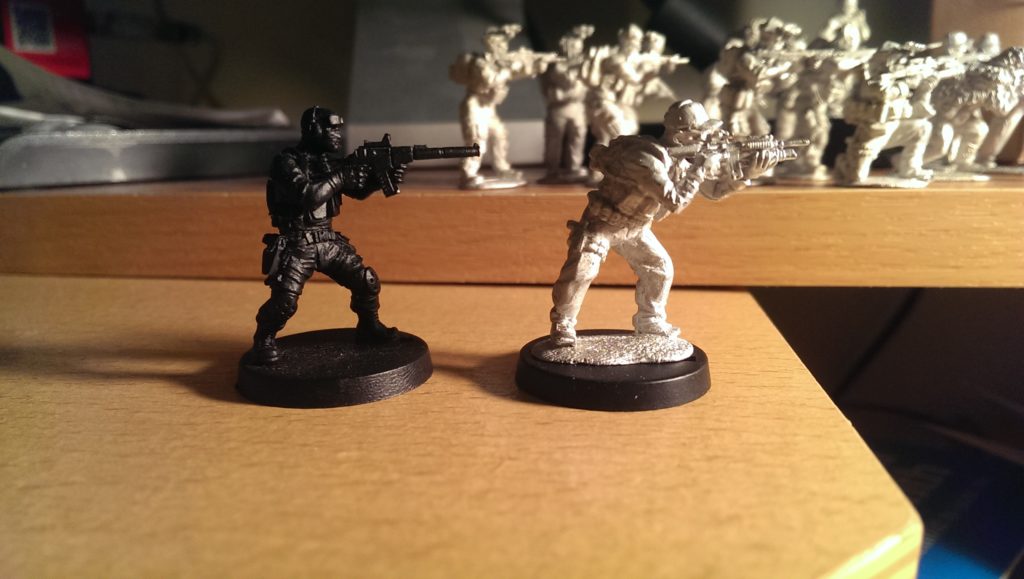 For comparison, I used one of the Hasslefree guys I bought a few months back. They both look okay alongside each other, with the main issues being the weapon sizes and the fact the Spectre models are just under a head taller. At most tabletop distances (and once they are painted up) they will be fine, but you’ll probably notice it when you rank them next to each other.

Lets start with the two delta force sets. Both groups have the guys in body armour and helmets (including the cool NVGs that have to be attached). Set one is the Delta Direct Action Team. These guys are a pretty plain fireteam all armed with some pimped SCAR-Ls (PEQ boxes, flashlights and EOTECHs included). Most of them also needed their guns glueing on: 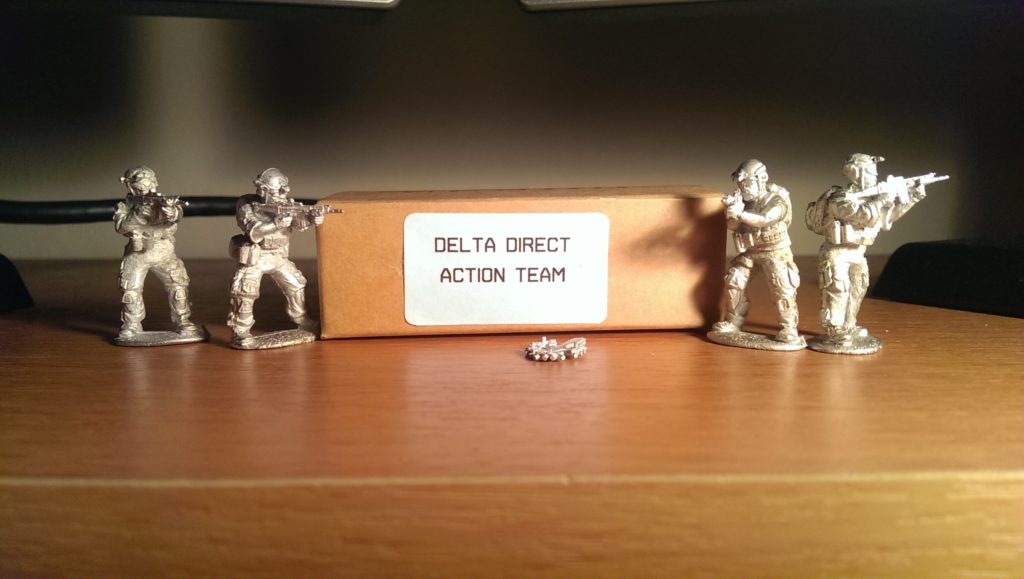 Set 2 is the Delta Close Support Team. Swapping one guy out for a four-legged friend, the rest of the team bring an AA12 (and MP7, a detail I love by the way), a SCAR-H (now CQC version) with ELGM grenade launcher (along with an AT4 for any vehicles or buildings you might find) and what looks like an M110. In other words, the perfect backup team while the Direct Action are kicking in the door. 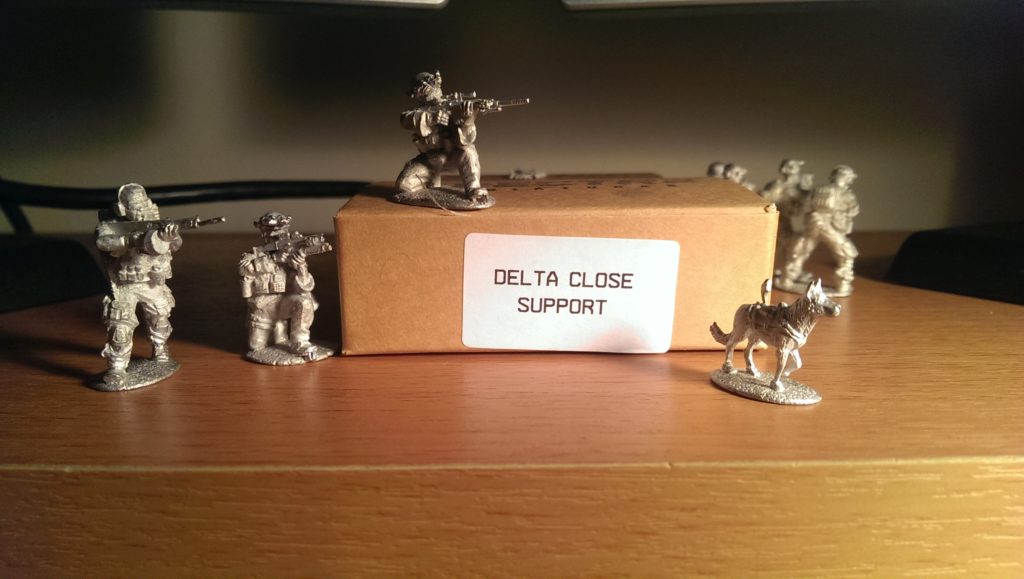 While the Deltas come to the party tooled up for door breaching, the SAS look a little more sneaky recon. The first squad is the SAS Recce Patrol. These guys look like the atypical long-range patrol – Bergens and packs on, soft caps and bare heads while carrying L119s with laser units and a selection of scopes. One even has a underslung grenade launcher just in case. 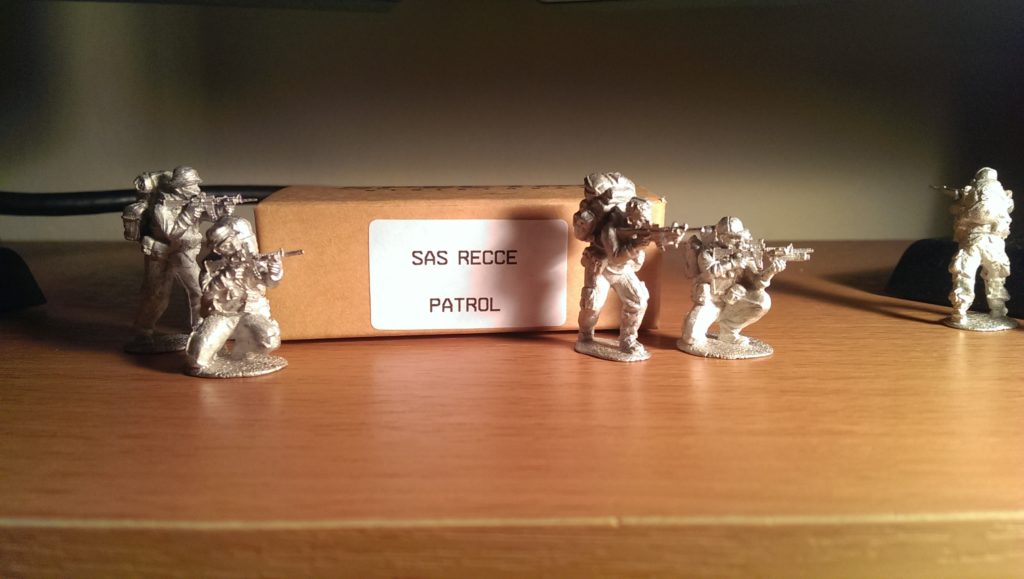 To help out, the other SAS squad is all Ghilled up. The SAS Close Observation is a great stealthy set up. Two guys are carrying L119s (again with the grenade launcher) while the other two pack marksmen rifles. One is the new L129A1 (a cool addition) while the other is the L96. The two marksmen figures look great as a spotter sniper pair but they also fit with the squad as a whole. 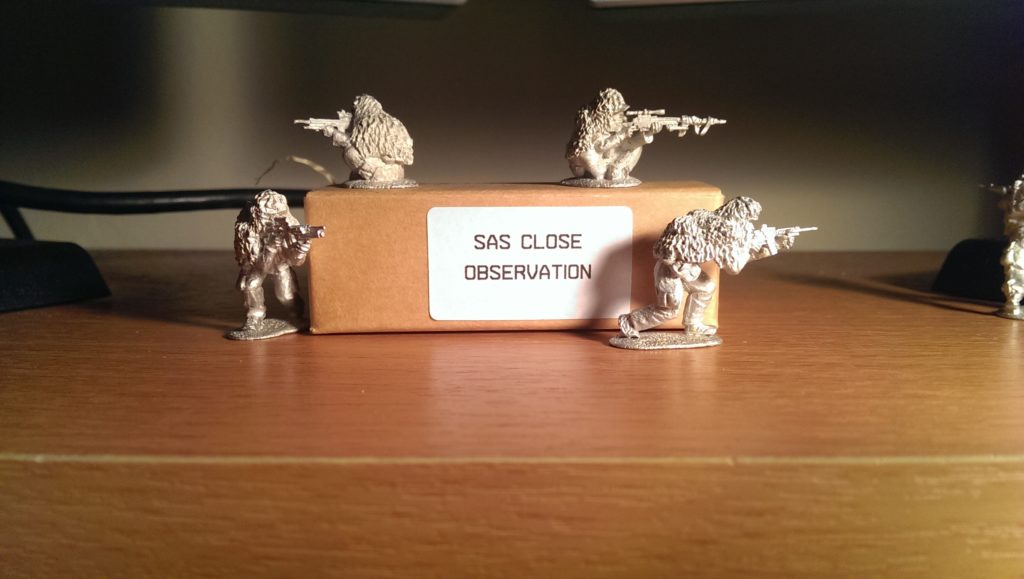 With the conventional guys done, lets move onto the slightly more shady guys.

To help out with your special operations, the CIA Field Agents bring some cool Special Activities Division looking guys and one rather flustered dude in a shirt. The SADs are armed with SMGs and PDRs, with one guy using a Vector, one using an MP7 and the last using a PDR. The Field Agent looks to be wielding a pistol with both a silencer and a light unit. The level of detail is incredible, with the slide serration on the pistol clearly visible. 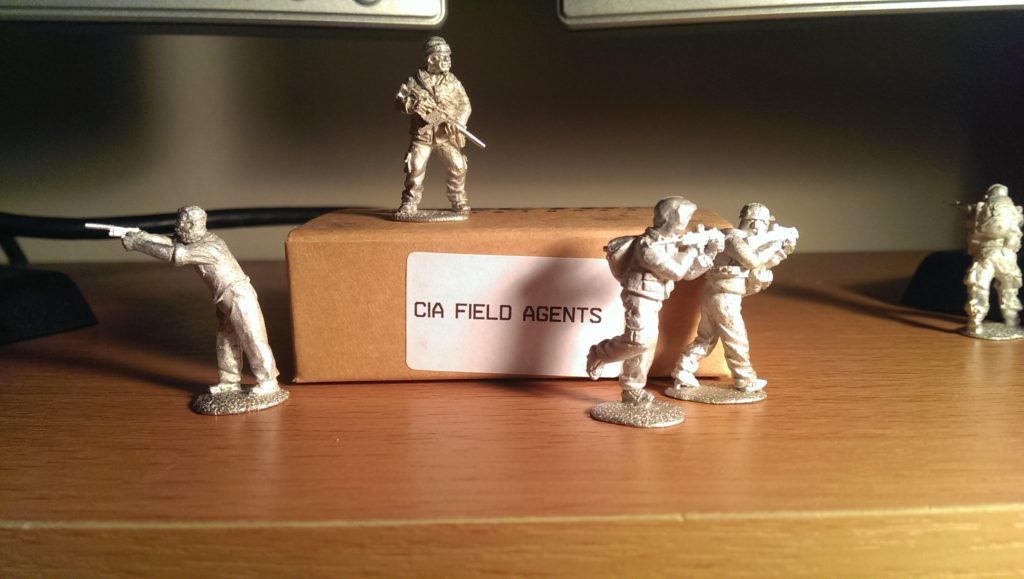 Now we move onto the contractors. These guys work well as both the intended contractor role and as dressed down special forces teams or more SAD operatives depending on the game you want to run.

Private Military Contractors Alpha are all armed with Vectors and look pretty damn cool. Baseball caps, goggles, headset and face masks are in abundance and they seem the perfect addition to the CIA guys. I did have issue with one of them on a small base constantly falling over due to his dynamic pose (obviously too many beers in the bar for this guy) but nothing a larger base won’t fix. 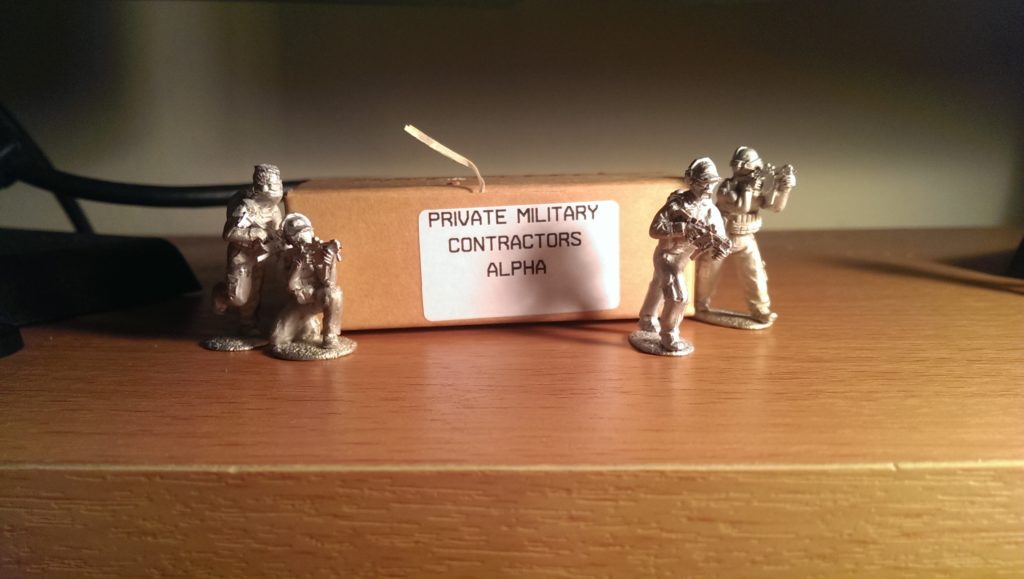 Private Military Contractors Bravo favour the AK, with all four squad members carrying them. They are also pretty pimped with optics, M4 style stocks and grips galore. One of the guys also carries a pump action shotgun for close encounters and his AK is also equipped with a grenade launcher making him the best armed man in Africa. With the bandanas and chest rigs, these guys look pretty cool. To stereotype, they might take the role of  a few Spetznatz operators when the situation demands. 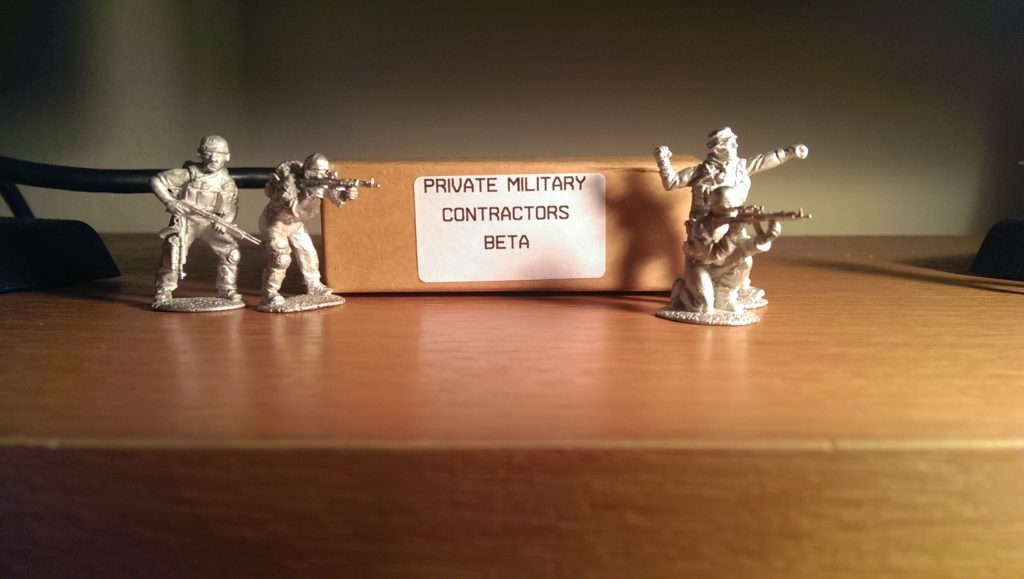 Private Military Contractors Delta might as well be called Green Berets. They look just like the stereotypical operator look – big beards, ball caps and oakleys. All of them have M4s, one with a grenade launcher underslung and another equipped with an AA12 in hand ready to clear some room. These guys look pretty damn perfect alongside both the CIA agents and the Deltas. 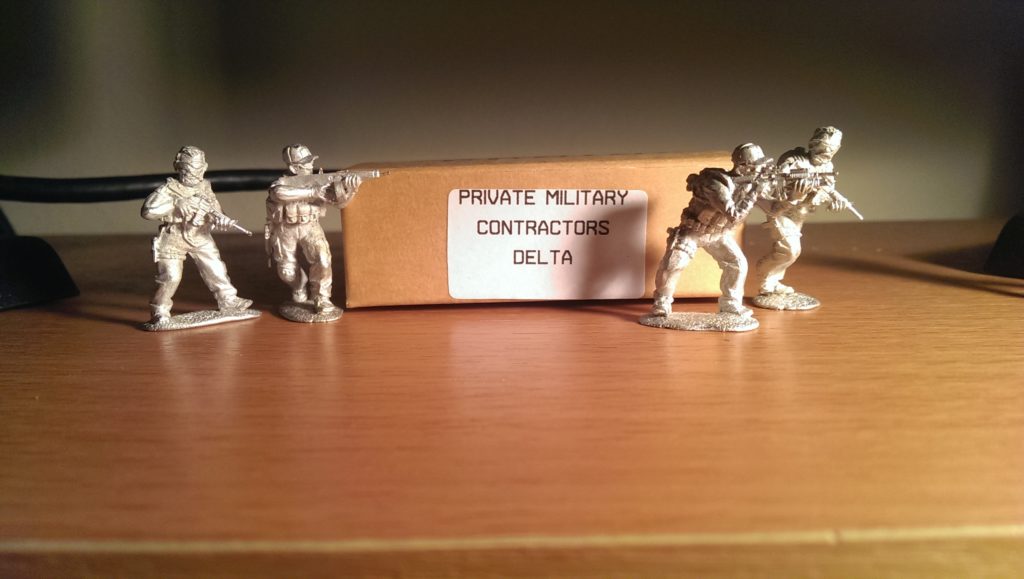 In addition to the figures I ordered, there was also a few additional figures that arrived due to my pledge level. I had a total of 5 additional guys and four ammo caches. The additional guys are a cool range, good to add VIPs to rescue or cool extra fighters for a squad. The figures are a deniable asset with an AK and an RPG, a Blood Diamond-esque contractor with AK and an ISA operative with an M4 to work with your Delta boys. I was also supposed to receive a VIP and bodyguard but accidentally ended up with two bodyguards. Luckily, it’s a pretty cool model so they may spend their time backing up the CIA agent. The four ammo caches are superbly detailed although a feel a little sorry for the one that is just a pile of AK mags and two grenades. 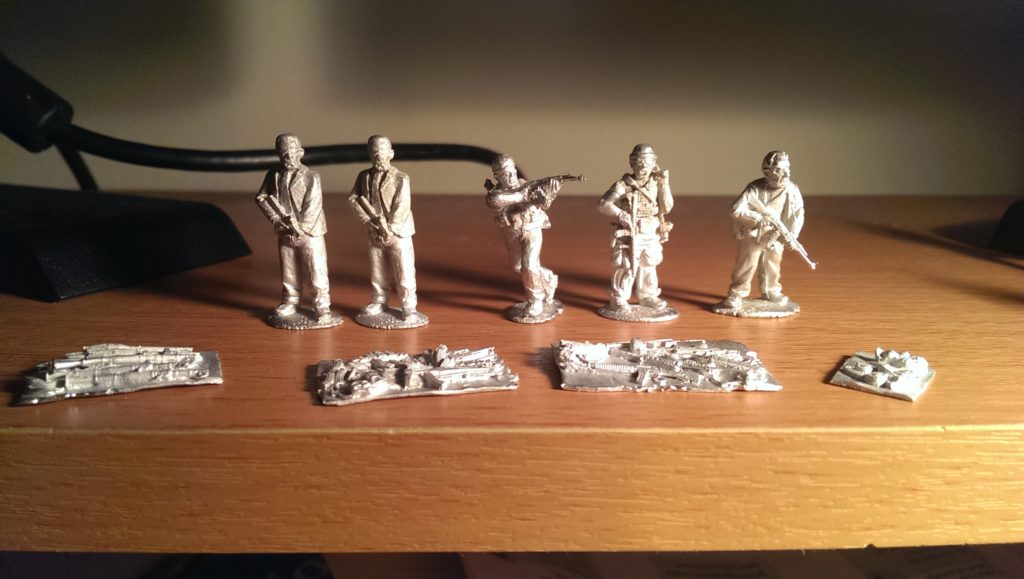 To conclude, I am really impressed. The level of detail in the models, the ease they went together and even the poses just scream quality. I am very excited to see what comes next from them. They have mentioned other sets and other theatres – I’d love to see some police and thieves packs (some SWAT guys in poses like this would be fantastic) but I’m interested in anything. I only have a few concerns like the thing barrels and the bases but nether of them are deal breakers. Price wise, they are at the higher end but I think they are worth it. Still debating the technical though – it is a large amount for a kit that won’t get a huge amount of use in an infantry focused game but it is pretty swanky. I’m also still waiting for the final set of rules which, based on the beta, should be a blast to play. 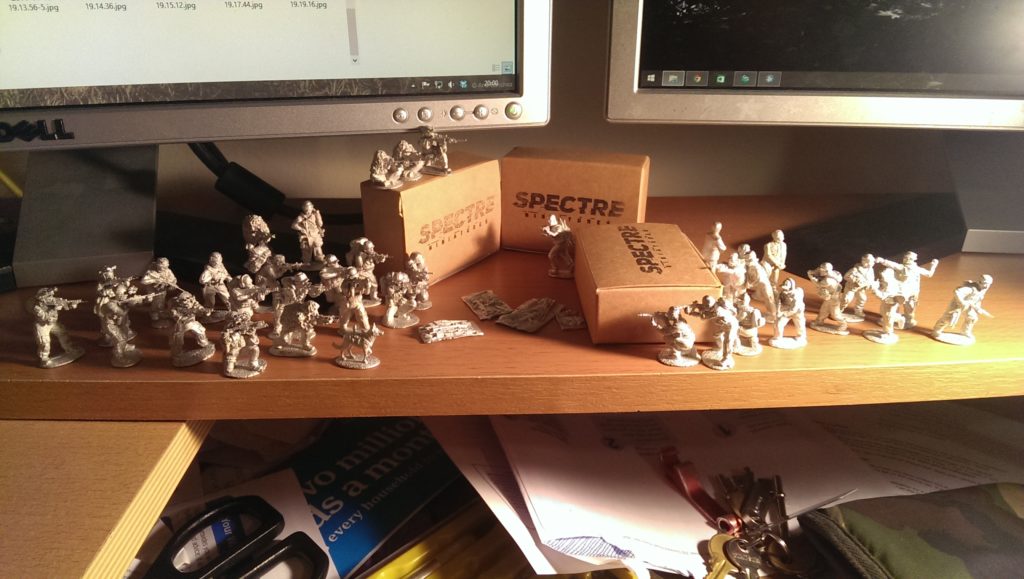 Now, I just have to persuade them to make a model like my current airsoft kit.…

If you want to pick up your own team of operators or african milita, you can buy them from Spectre’s website at http://www.spectreminiatures.com